Napier-based Firmans Marine’s 50-year partnership with Mercury began when someone saw a Mercury outboard in a window.

“The history of Firmans Marine,” says owner Brian Firman, “can be traced to my grandparents – Fred and Jean – who originally ran Caltex service stations before adding a caravan rental fleet. As the caravan business began to boom it became more attractive than the seven-day-a-week service station. They put all their energy into caravans.

“In 1968 my dad Ray – working in the family business – traded a caravan for a wooden launch called Vagabond. It started the Firman family’s love for fishing. Then, in 1971, another deal ended with Ray trading a 9.8hp Mercury outboard which he displayed in the showroom shop window. 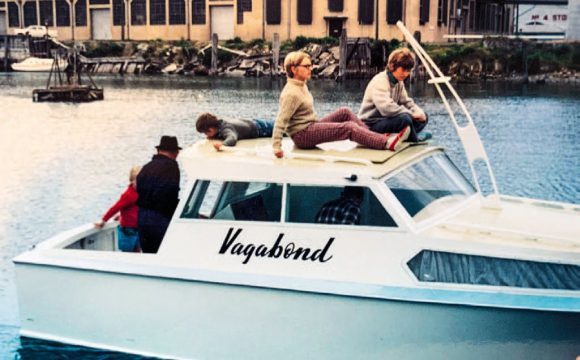 “Coincidentally, David Reynolds – the marine division manager for Spedding Ltd – drove past and noticed the engine.

He dropped in and asked us whether we’d like the exclusive contract to sell Mercury outboards!” Ray readily agreed, and Red Band Mercury outboards were transferred to the Firmans shop. The business was renamed Firmans Caravan and Marine Centre Ltd.

By the mid-80s, Ray handed over the reins to sons Brian and Gary (both working in the oil industry, in Borneo and Africa respectively). They returned home, sold off the caravan business and focussed on marine equipment, new and used sales and workshop service.

Over the years, Brian and Gary were joined by siblings Sandra and David, making it a real family affair. Brian has been the sole owner since 2000 and says he’s seen huge changes across the years since those first Red Band engines.

The Firman family’s first boat Vagabond and Brian aboard an early Mercury-powered demonstrator.

“Probably the biggest shift was in the late 90s when Mercury launched the direct- injection Optimax range – it immediately halved the fuel bill for most users.”

The 50-year Firman-Mercury relationship, he adds, has been a fundamental part of the success. “Mercury has always been a leader in innovation and technology and it’s always backed that up with outstanding support.”

The 50-year celebratory champagne will have to wait, he says, because in the current environment there’s too much to do. “It’s the busiest I’ve ever seen it in my 36 years in the business. Covid-19 has brought on a different mindset for a lot of people. Driven by the lack of overseas travel and low interest rates, I think people are now more focused on friends and family and a ‘you-only-live-once’ mentality. Demand for recreational boating is huge at the moment – we’re just trying to help as many customers as we can.”