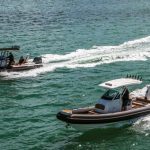 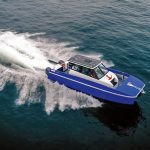 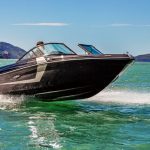 Words by Sarah Ell. Photography by Grant Dixon and Supplied.

If you can’t find exactly the boat you want to buy, and you’re a handy chap, why not design and build your own? That was the thinking when engineer and ideas guy Austin Kell returned home to the Bay of Islands after years working overseas, and was looking for a new boat to enjoy with his young family.

Kell, who along with wife Peta was brought up in the Bay, had been working overseas for more than a decade as a design engineer for oil exploration and renewable energy companies, before moving home three years ago. Keen to get back out on local waters, he and Peta were finding it increasingly difficult to fit three growing kids and all the water toys they used into their existing 5.5m Ramco tinny. 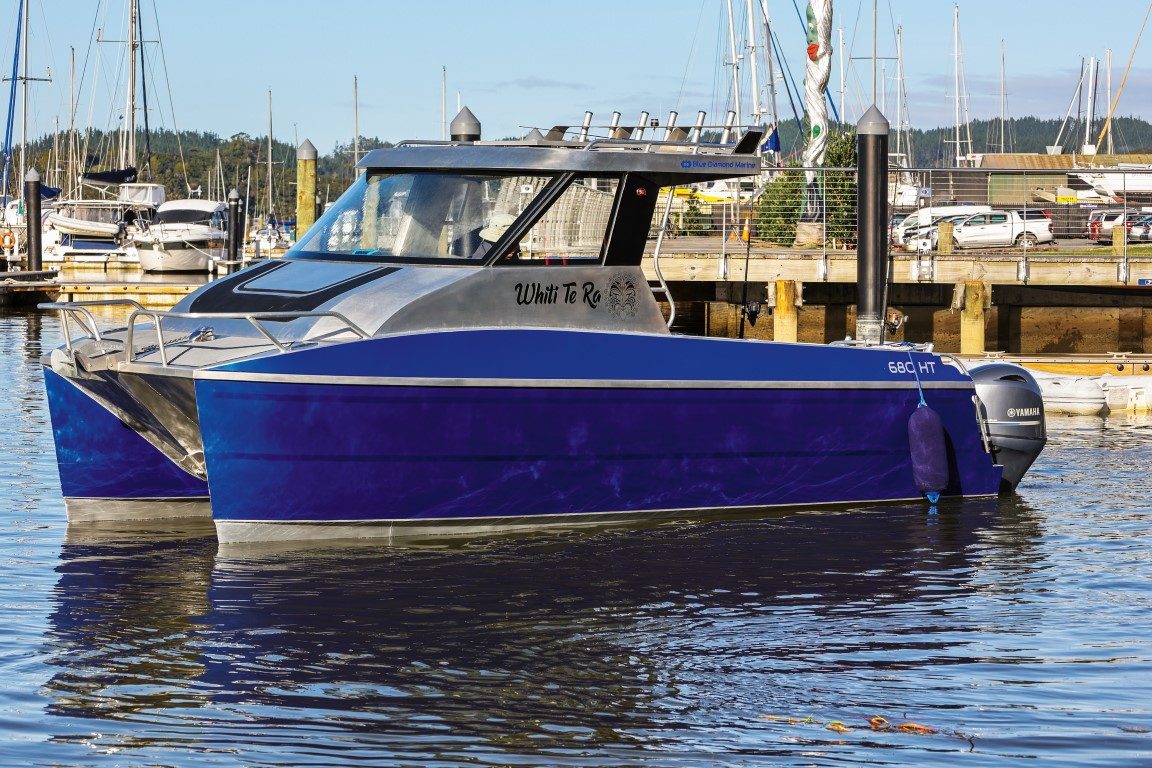 “We’d wanted a small powercat for quite a while, and when we got back to New Zealand we definitely needed a bigger boat – for a day trip, we were loading up three kayaks, five bodyboards, bean bags, camp chairs, chilly bins . . . we figured we needed a bit more space,” Kell says.
They turned to long-time friend, designer Rob Shaw, to see how they could go about creating a boat of their own. Shaw is better known for his racing yacht designs but was keen to work on a powercat project, and drew up a concept design. Together they worked on the details, with Shaw contributing naval architecture for the final project and Kell working on detailed design and engineering – as well as finishing the boat and trailer himself after the hulls had been fabricated.
The Kells wanted a boat with good sea-keeping ability, and plenty of space for storing water toys and other essentials. 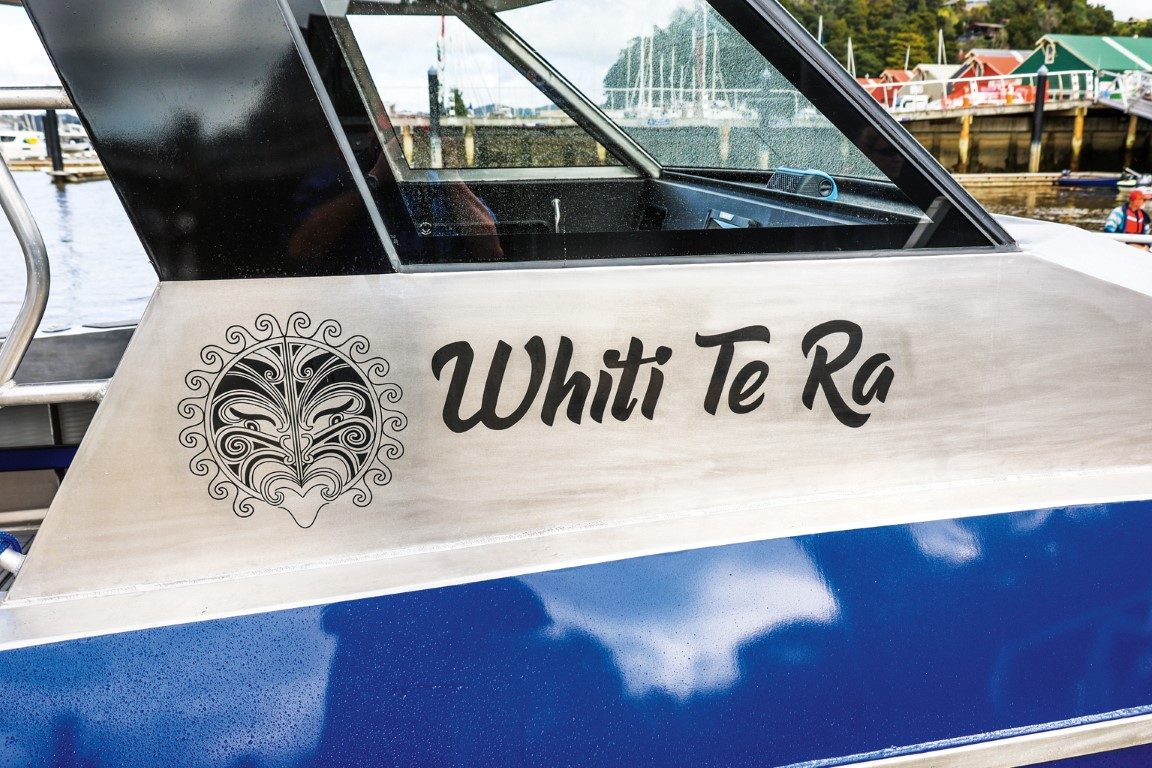 The powercat concept appealed because of the more comfortable ride it could offer compared to a similar-sized monohull aluminium boat, as well as having plenty of deck room, and storage space inside the hulls.
“If you look at any aluminium trailer boat bigger than about 5.5m they don’t have any more deck space, just more cabin, which to us seemed like a waste of space,” Kell says. “But we still wanted a little cabin where the kids could shelter or lie down if they need to.”
The result is Whiti Te Ra (from the final line of Te Rauparaha’s famous haka, meaning ‘the sun shines’),
a practical and hard-wearing day-boat with an eye-catching bright blue vinyl wrap. The hull design has been kept conventional, a symmetrical v-shape, with high tunnel
clearance to minimise pounding. This means the boat looks big on the trailer, with its high topsides, but once you’re on the water it creates a nicely elevated platform. 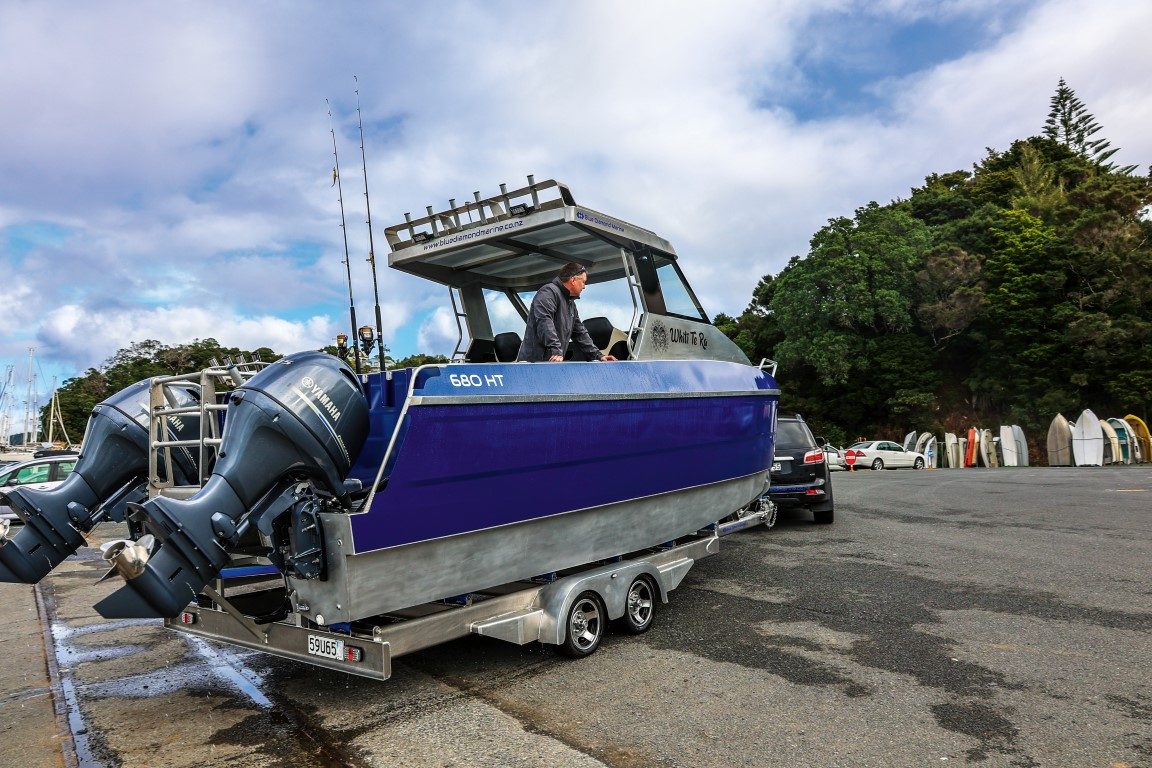 The boat has a small cabin, with an enclosed area with two side-seats forward, which can accommodate a chemical toilet, and be converted into a double berth. The rest of the boat is basically open cockpit space, with SeaDek flooring throughout, making it practical for fishing and with plenty of room to move about when the whole family is aboard. There’s a small SeaDek’d area up on the bow if you want to fish from up there (though the anchor is on an electric winch, so need to go forward), and more SeaDek around the solar panel on the roof of the cabin, to make it safer for jumping off (and yes, a lot of that goes on). 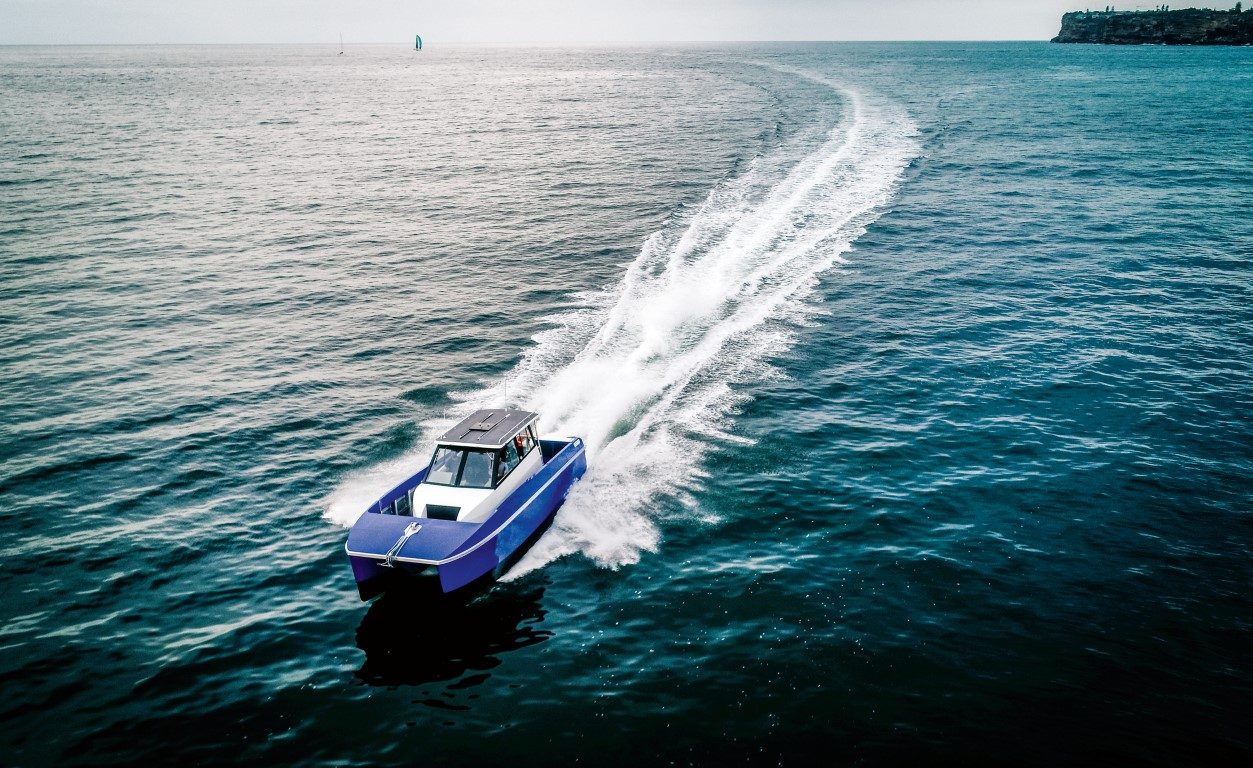 The 680HT is powered by a pair of 115hp four-stroke Yamaha outboards.
“We decided there was no point in adding a lot of horsepower, just to make the boat go faster,” Kell says. “With these engines it cruises at between 22 and 24 knots, which is ample, and it keeps the weight down and the fuel efficiency up. Cats are quite sensitive to weight distribution – keeping weight out of the back was the right thing to do.” 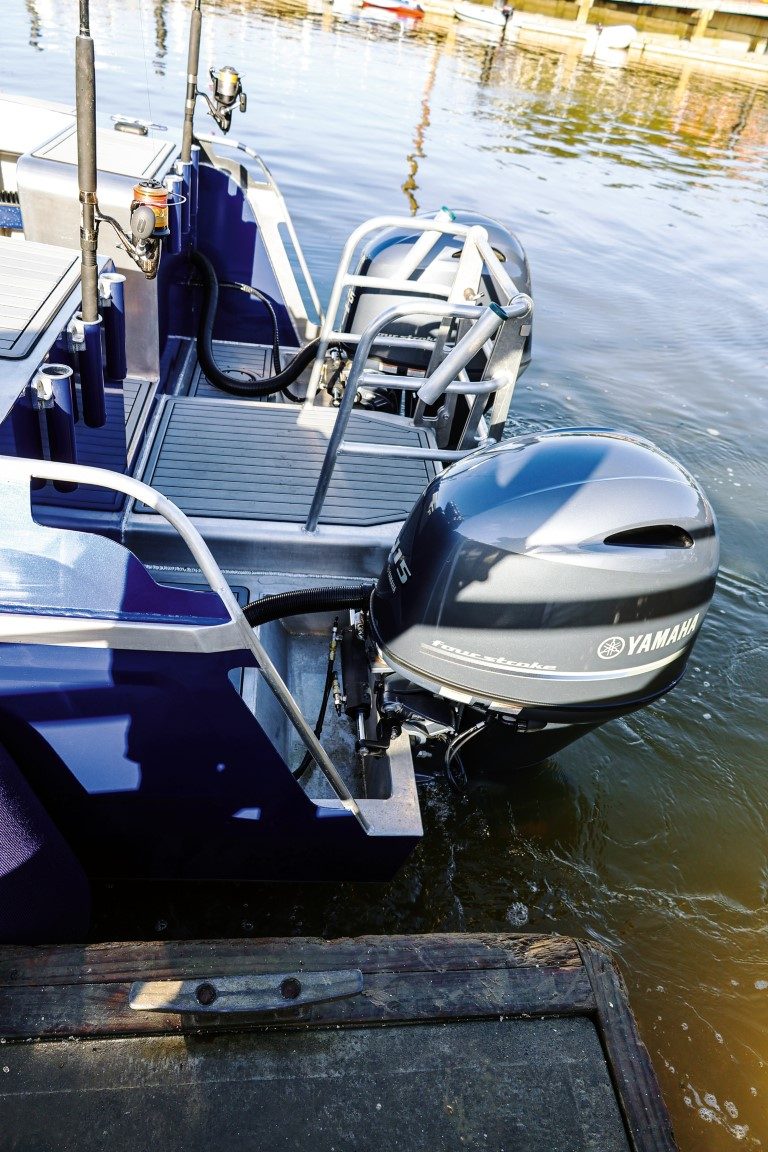 Top speed so far has been around 34 knots, and Kell is looking forward to doing some more sea trialling with a set of US-made four-blade props. However, rather than speed, it’s the comfort and dryness of the ride that have the boat’s builder smiling.
“It’s definitely a lot of boat for the size of it. It’s significantly lighter than an aluminium monohull of the same size — the hull weight was around 1400kg including the cabin and windscreen, before the seats and other interior fittings went on.”
The interior fitout is minimal, with two forward-facing bucket seats, and two rear-facing seats hinging down from their pedestals which can be clipped away when not in use. At the helm is a 12-inch Raymarine screen, the VHF and the controls for the Maxwell RC6 electric anchor winch. In one of the seat pedestals there’s an 80-litre Dometic electric fridge (with the power demand offset by a 130W solar panel on the roof) and a 70-litre Dometic ice bin under the driver’s seat.
There are rod holders across the back of the cabintop, and at the transom, on either side of the central walk-through. 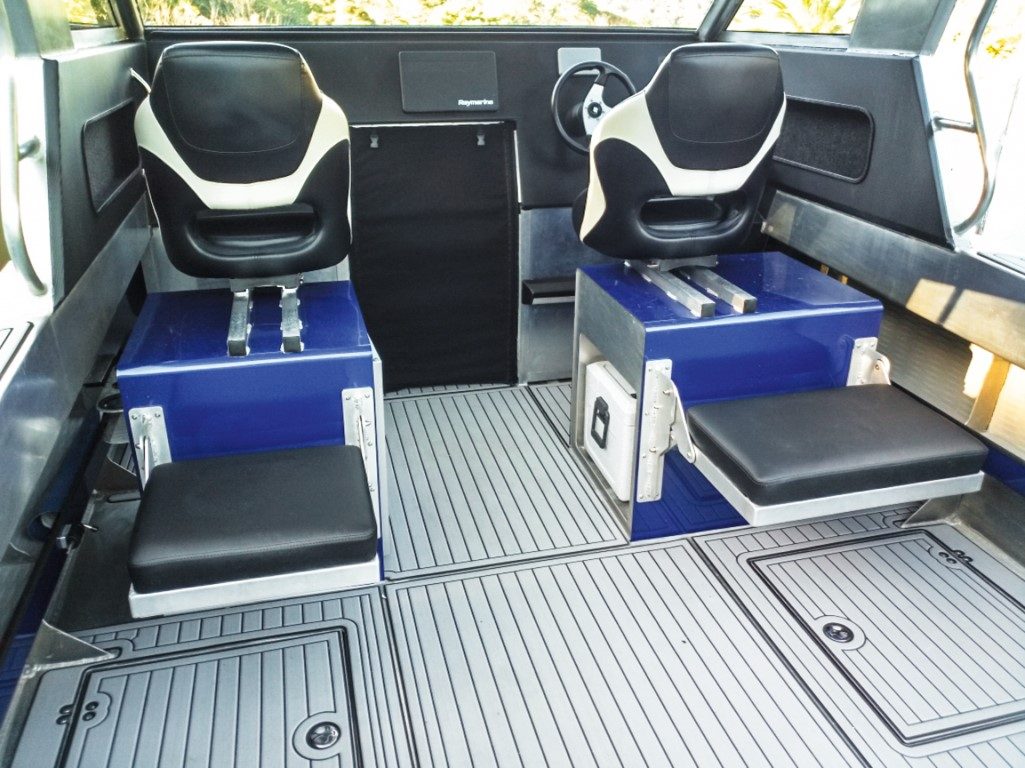 A bait board can also be clipped into these, and a timber table, on which can sit a portable gas barbecue. There’s a 70-litre live bait tank, too.
“Because there’s so much storage space in the hulls, all this stuff can be easily stowed away when it’s not in use – it doesn’t all have to stay on deck.”
Basically, the catamaran hulls create a 6m by 2.6m platform, and Kell says you could easily add a larger hard-top cabin, or have a walk-around, depending on what you want to use the boat for. It’s this flexibility of deck plan which saw Kell start thinking beyond just creating a boat for his family and look at commercialising the concept, as the Blue Diamond 680HT.

“We felt we’d come up with such a cool-looking boat, let’s make this the demonstrator and see how it goes as a business,” Kell says. With his connections in Australia, he has started a company with Scott Ramsden, a world-champion 18-foot skiff sailor, employing a team of aluminium boatbuilders at their workshop in Chinderah in northern New South Wales. There Blue Diamond has designed and built a 10.5m aluminium high-speed catamaran to AMSA survey, for use as a camera boat for Sydney company Sail Media, and there are several other projects in the works.
The Kell family is keen to step up to overnighting on the boat this summer, and Kell is having a canvas ‘camper cover’ made which will enclose the rear of the cockpit, over an aluminium frame. They’ve had plenty of use out of Whiti Te Ra since its launch in late 2020, on day trips picnicking, snorkelling and fishing around the Bay. So what better way to try it out than heading out to Paradise at Urupukapuka Island for an afternoon’s fun in the sun? Four adults, five kids aged seven to twelve, kayaks, snacks and drinks, wetsuits and other paraphernalia get loaded aboard and we set off from Opua. 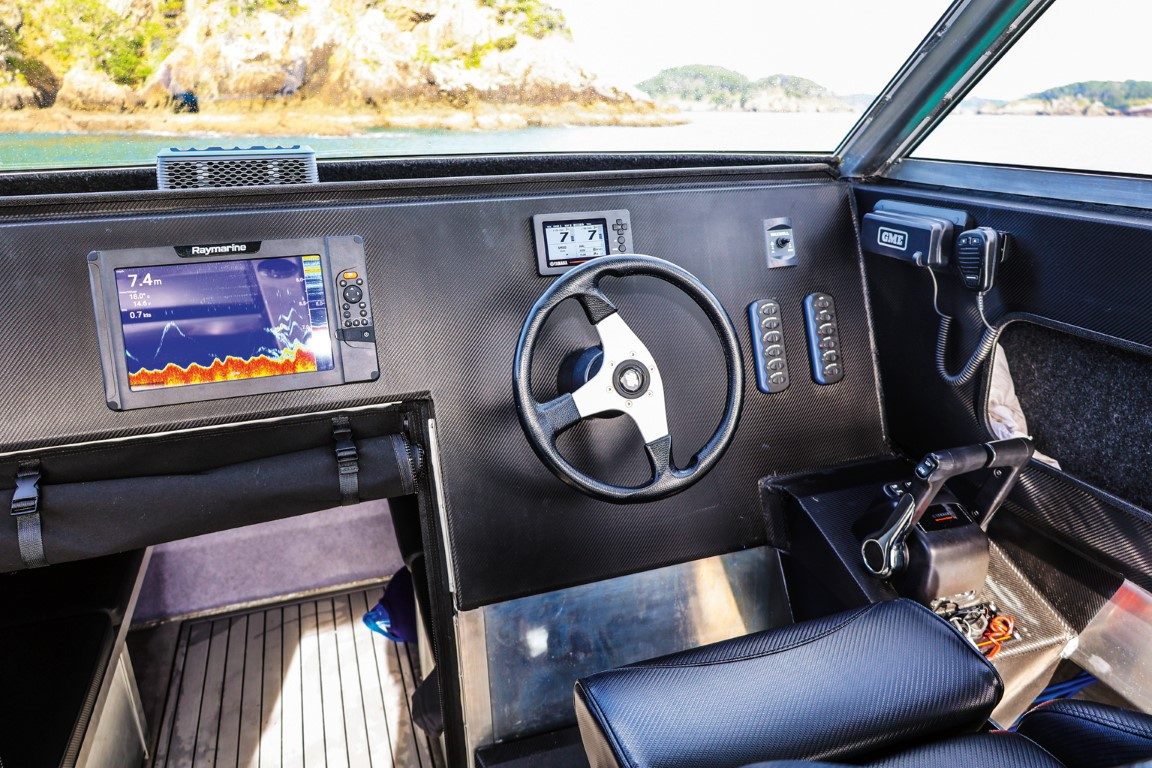 Visibility from the helm through the single-piece windscreen is great, boosted by the extra elevation of the tunnel. It’s a smooth ride through the chop of the inner bay and even the notoriously lumpy sea off Tapeka Point doesn’t cause any pounding or throw spray onto the windscreen.
At Paradise, anchoring is easy with the electric winch, and the kids settle in to jumping off the sides and then, as they get braver, the cabin roof while the adults relax in the sunshine. (And yes, the adults did have a go at jumping off too!) Getting back on board to warm up is easy, with a telescoping ladder folding down from the boarding platform between the two engines. After a busy afternoon, the kids all hunker down in the forward cabin out of the wind as we cruise back to port.

Both launching and retrieving the boat are made easy by another invention of Kell’s: an auto-hitch system on the bow, rather than the traditional winch and chain, making it easy to handle as a couple or even single-handed.
In the Blue Diamond 680HT, Kell has created a boat which is not only perfectly suited to his own family’s needs, but will also appeal to others wanting a practical, comfortable platform for day-tripping, basic overnighting, fishing and other good times. With the flexibility of the catamaran layout, masses of room and its comfortable and efficient ride, it offers a lot of boat for its length.