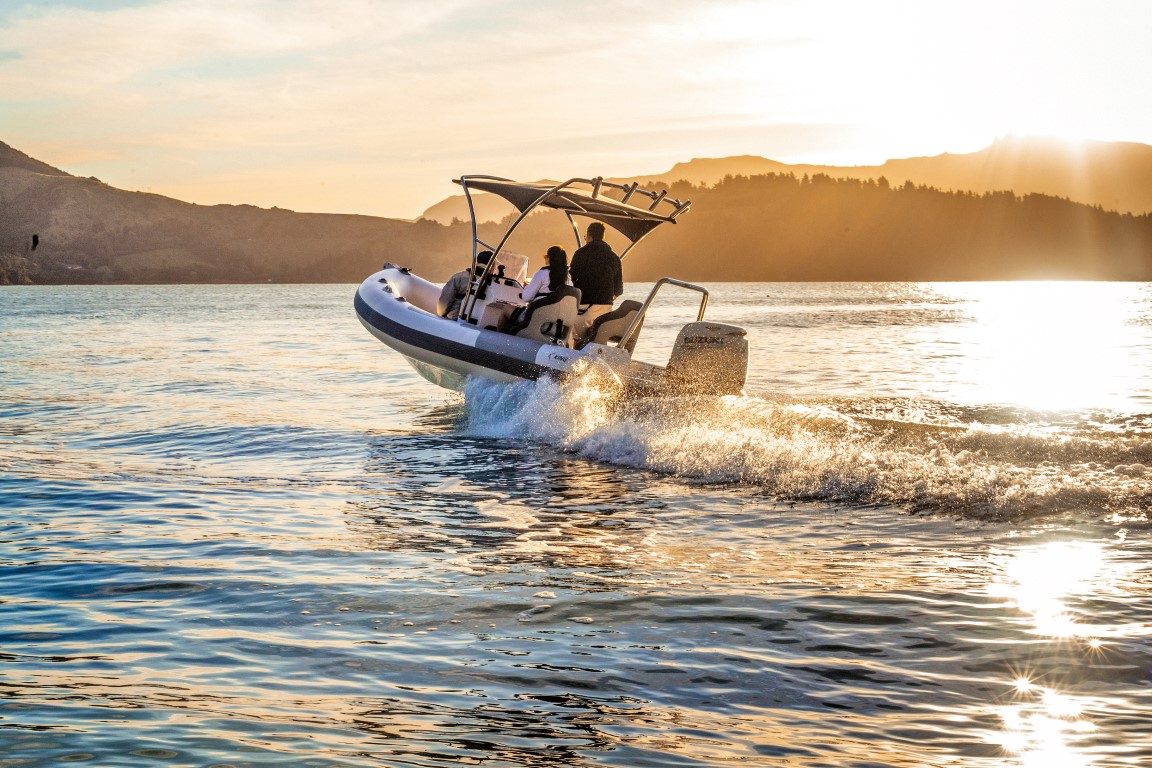 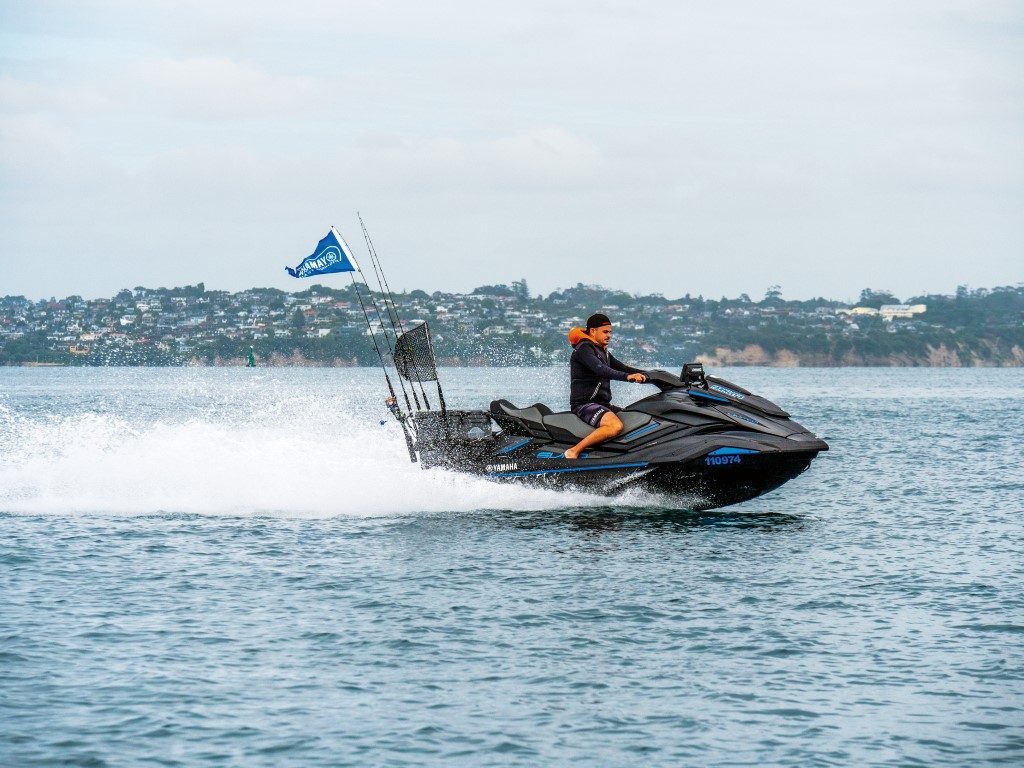 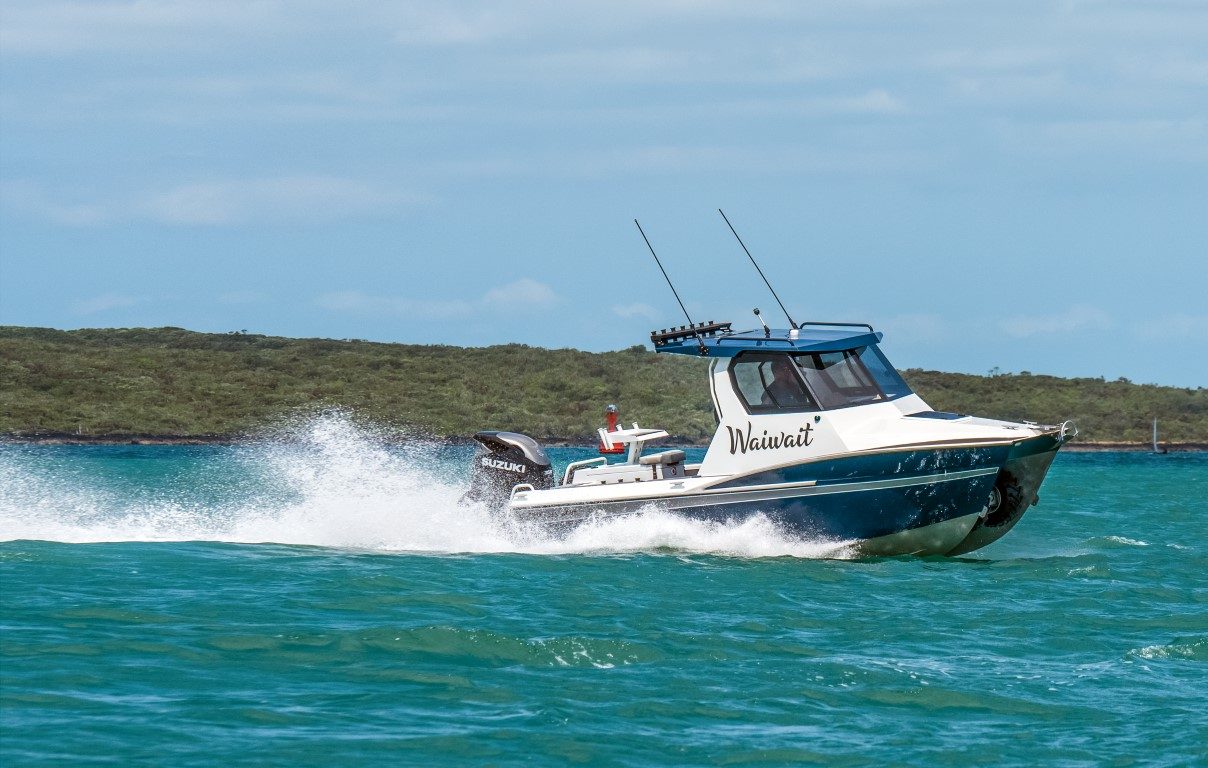 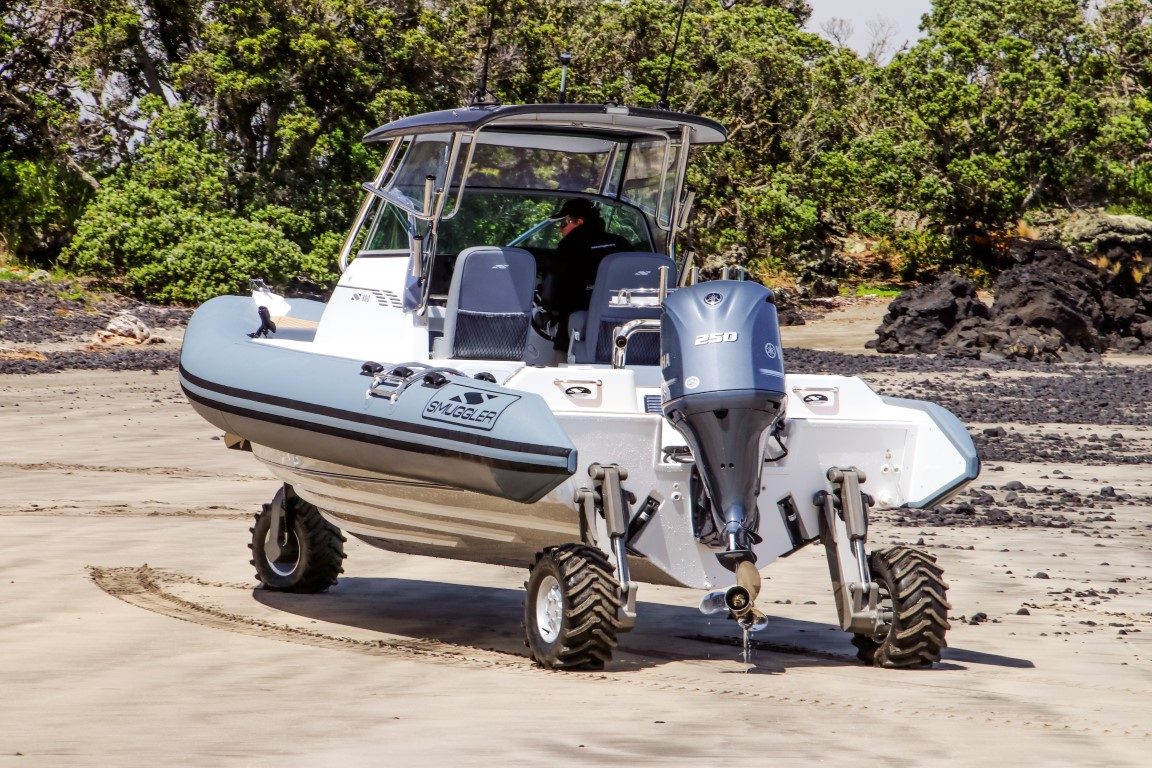 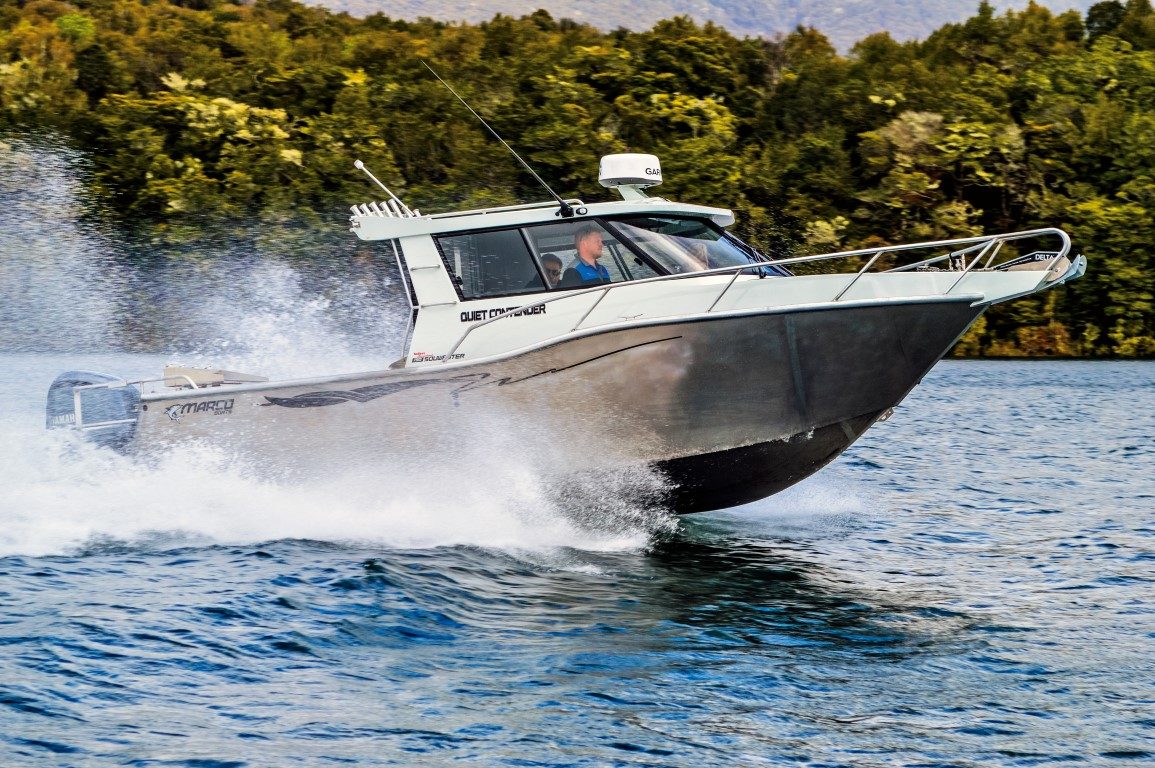 The new CSB Huntsman Centurion Carbon Edition debuted at the Hutchwilco New Zealand Boat Show – and I was impressed then by its pleasing lines, superior build quality and exceptional attention to detail.

My chance to try the boat, along with a second Centurion in a more standard spec, came on Lake Wanaka in early July. Over two days we were blessed with a bit of sunshine between rain squalls and a very frosty morning that put paid to plans of a sunrise photo shoot, since the road covers were frozen to the boats after overnight rain.
Flat conditions on the lake didn’t do this 6.5m boat justice. With a 23° deadrise at the transom and a nicely balanced hull, this is a very capable rough water vessel which, according to CSB Huntman’s MD Geoff Robinson, rides and handles as well or better than CSB’s Series 6000. The Series 6000 has a reputation for excellent rough water performance. 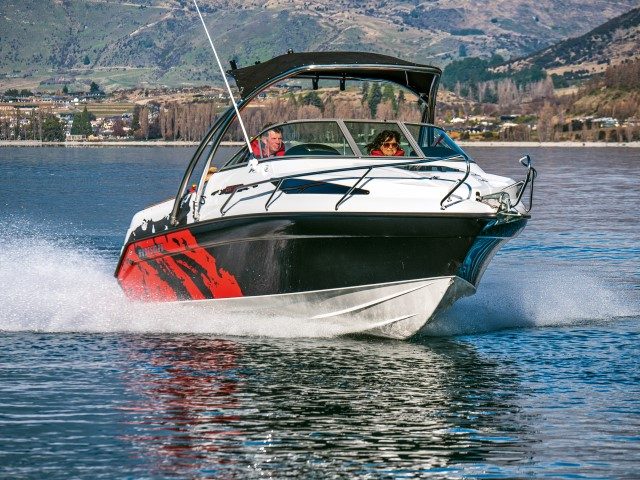 The Centurion is the first CSB Huntsman developed using CAD(Computer Aided Design) technology. The process was a revelation, says Geoff, allowing them to create a boat that is easier to build, fits together perfectly and looks great.
Computer technology has also been used to cut the upholstery, carbon panels, floor coverings and many other components, which fit together with no obvious cut lines, as would’ve beeen the case had the boat been manufactured in a more traditional manner. 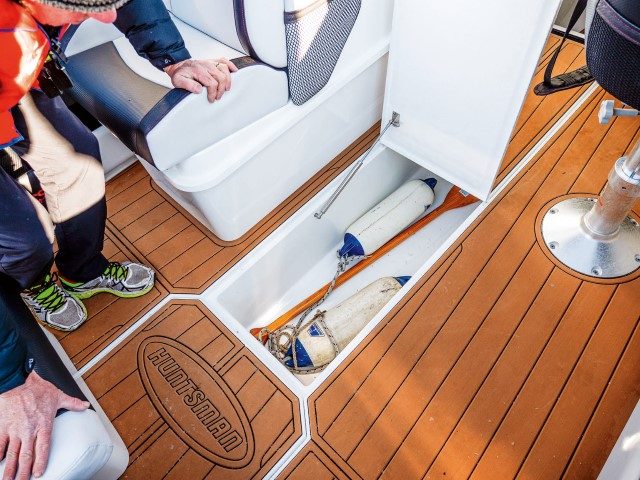 Using CAD, Geoff and business partner Mike Bamber came up with a split-deck ‘Evolution’ design that accepts different deck modules front and rear. Currently the Centurion is available in outboard or inboard configurations, but there’s also a bowrider on the way.
The Centurion performs well with a 150hp outboard, which will pull a skier says Geoff, but it can handle up to 250hp on the transom. The review boat was fitted with a new Mercury ProXS 200hp V8. This is an impressive engine that offers strong acceleration and a V8 soundtrack that’s impossible to ignore. All of us who experienced the V8’s snarl on test day loved it: it’s hard not to grin with pleasure when it’s on song. 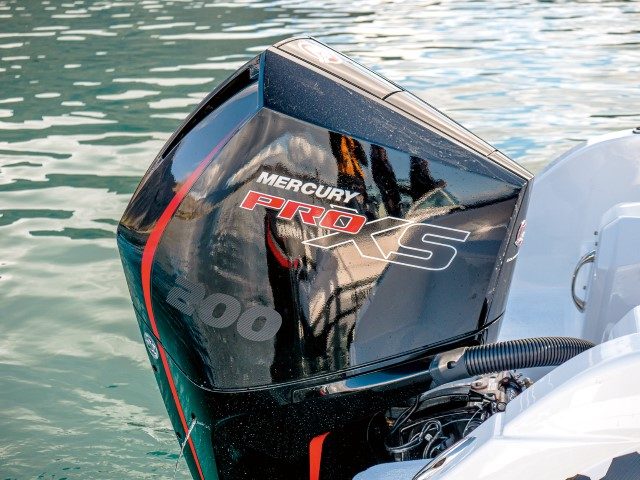 The outboard’s performance is hard to ignore too. On Wanaka we saw a maximum speed of 82kph (44.3 knots) at 5800rpm. In saltwater and at sea level, Geoff reckons he can get a little more.
This boat was set up for the boat show, so it doesn’t lack for equipment or features. Among them is the X-Air wakeboard tower, a high-end folding bimini top designed for serious tow sports. CSB Huntsman has also gone to town with the boat’s graphics, CNC-cut and monogrammed Ultralon floor coverings, teak coamings and the striking moulded carbon fibre panels that give this boat its Carbon Edition moniker.
Carbon fibre panels are used to good effect, not only on the dashboard, but also on the cabin bulkhead and along the boat’s sides. They look very smart indeed.
The Centurion feels spacious inside. CSB Huntsman has dispensed with walkaround side decks, which are seldom satisfactory on cabin boats of this size, instead pushing the cabin all the way out to the gunwales. Access to the foredeck is via an opening windscreen panel and steps moulded into the sliding cabin door, a clever solution that works well. The cabin door is lockable, which is great if you need to store gear inside, and there’s provision for a toilet under the full-length v-berths. 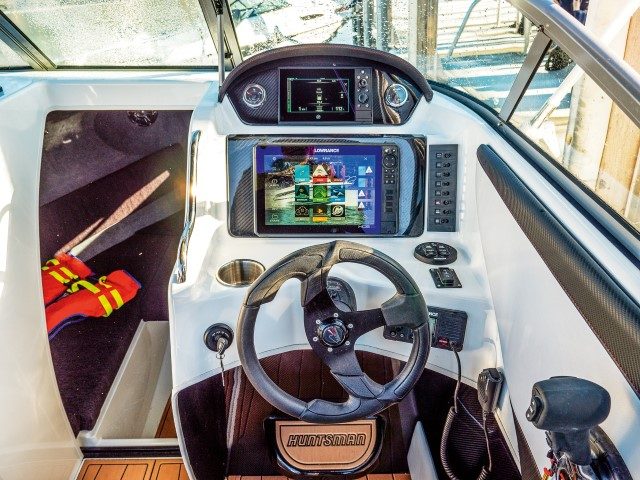 The layout is flexible. On the review boat a fully adjustable pedestal helm seat was complemented by a king and queen-style back-to-back seat with generous storage in the seat base. The deeply padded and upholstered seats hinge forward for easy access and this model is also available with twin pedestal seats or two sets of back-to-back seats.
A pair of transom seat-bins with hinged, padded seat backs protecting the battery, switches and fuel filter provide additional seating. Remove the seat cushions and slide the bins under the transom to make more room in the cockpit. A step-through on the port side gives access to the stainless-steel boarding ladder.
Padded gunwales and plenty of toe-room should please the anglers among us and there’s storage for fishing rods and other long items in the side shelves, built-in rod racks under the gunwales, a rocket launcher on the X-Air tower, a pair of through-coaming rod holders and a rod rack across the back of the bait station. The bait board mounts on the ski pole, which along with the bait board, can be stowed under the seats or in the Centurion’s generous underfloor ski locker. And while this is a deep-vee design, stability at rest is really very good, as it is when the boat’s underway. 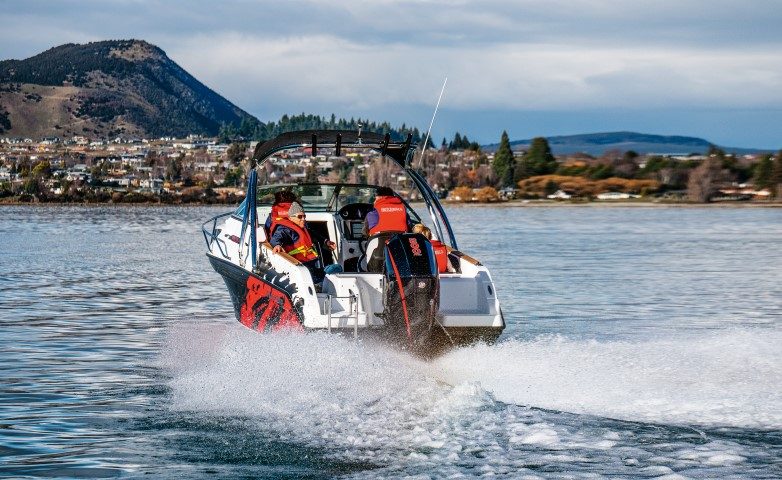 Throwing the boat into a series of tight turns revealed a hull that hangs on tight and tracks like it’s on rails. The punch the Mercury V8 delivers not only maintains boat speed in the turns, but also catapults the boat out of the apex. This Centurion is fitted with Lectrotab trim tabs, which were useful when people moved around the cockpit, but the second Centurion performed well without tabs.
Any water finding its way onboard is directed aft by a drainage channel down the middle of the hull. This boat is fitted with a 1500gph automatic bilge pump; an 1100gph manual pump is standard. CSB Huntsman fills the space between the hull and the hull liner with closed-cell foam. This not only helps stiffen the hull, it makes the boat a lot quieter through the water. At the boat show, Geoff showed me a sample of the hull laminate, which is reassuringly thick. This is a solidly-built boat. 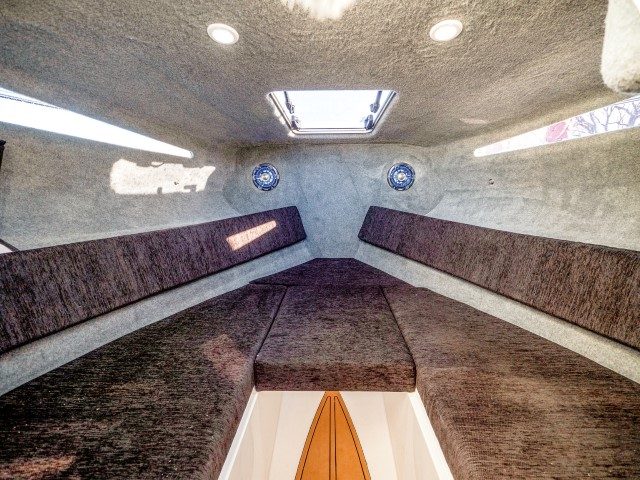 Another feature of the Centurion is the sealed compartments around the belt line and transom, which provide positive buoyancy where it’s needed: high up in the hull. It’s a system CSB already uses with its Sotalia. The boat should float upright if swamped, says Geoff.
Despite the cold, the Centurion was a comfortable place to be. The windscreen gives good protection to seated occupants and clears are available for inclement days. The helm position is very good, the console design accommodating a large Lowrance HDS 12 MFD, a VHF radio, drink holder, grab rail and various switches and controls, all of which are easy to reach. The Mercury Vessel View display and gauges are on a separate panel at eye level under the dashboard’s curved eyebrow.
On the passenger’s side, the console mimics the helm’s curved profile and features a generous locking glovebox, Fusion stereo head unit, another drink holder and a couple of 12V/USB outlets. The stereo speakers and the boat’s many cupholders feature LED lights and LED lighting is used under the gunwales to illuminate the cockpit. The helm and cockpit layouts work very well, both stylistically and ergonomically. 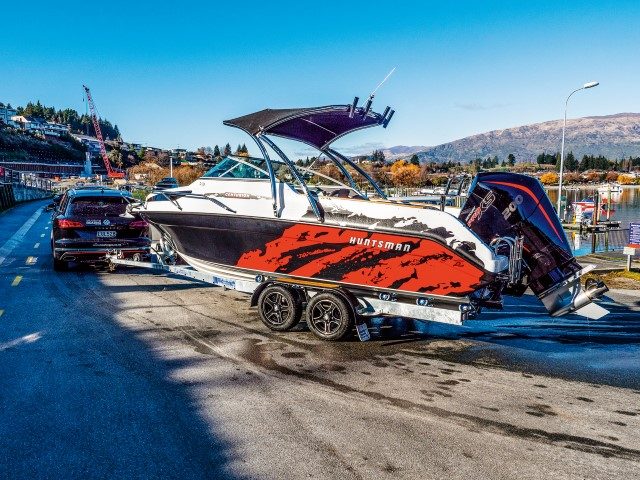 The CSB Huntsman Centurion Carbon Edition is presented on a twin-axle galvanised steel Watercraft trailer, with override brakes on one axle. On the road, the rig weighs around 1800kg./>