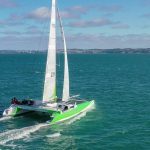 Setting off on Slime – a 13.5m John Hughes extended Blade Runner catamaran – is akin to accelerating down the runway in a big jet. You’re thrust back into your seating position, thrilled by the raw power.

In Slime’s case speed is an easy 20-plus knots. “Shall we go to Kawau or Great Barrier for lunch?” is a reasonable question.
John Hughes, owner and builder of Slime in all her carnations, is a living legend in the multihull world. Since her original build in 1987 from Malcolm Tennant’s design plans, Slime has transmogrified into a custom-design-and-build-carbon-rocket-ship with Hughes’ legendary innovation and ingenuity on display everywhere you look. 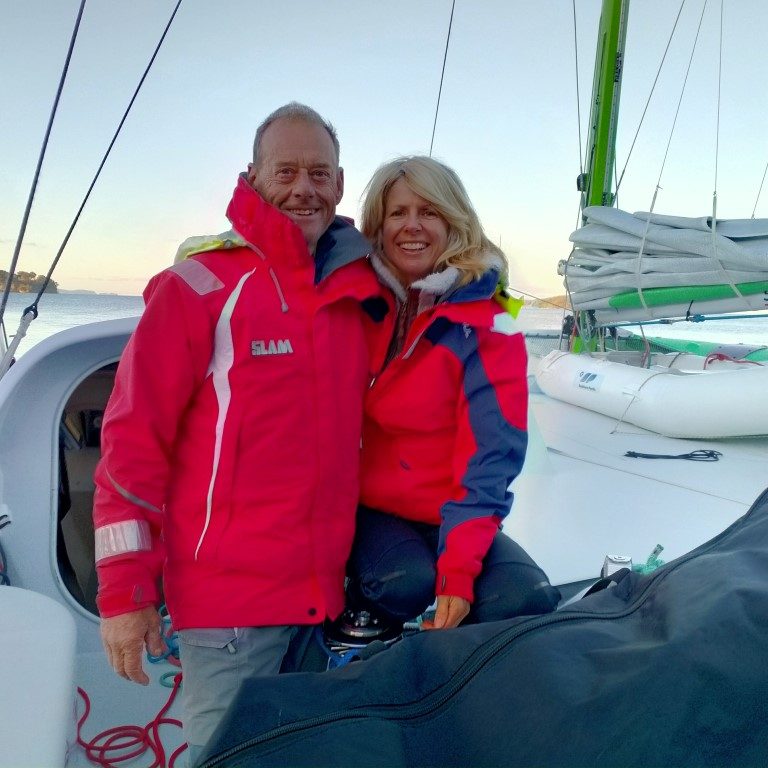 You could say he has done for multihulls (with Slime in particular) what John Britten did for motorbikes. Peerless.
Stepping from the beach onto the wide transom highlights the first impressive feature of Slime – her retractable square-tip rudders, which enable very shallow water manoeuvring. This is perfect for her Mahurangi home waters – but they also provide a perfectly balanced, neutral helm at quick speeds on all points of sail. 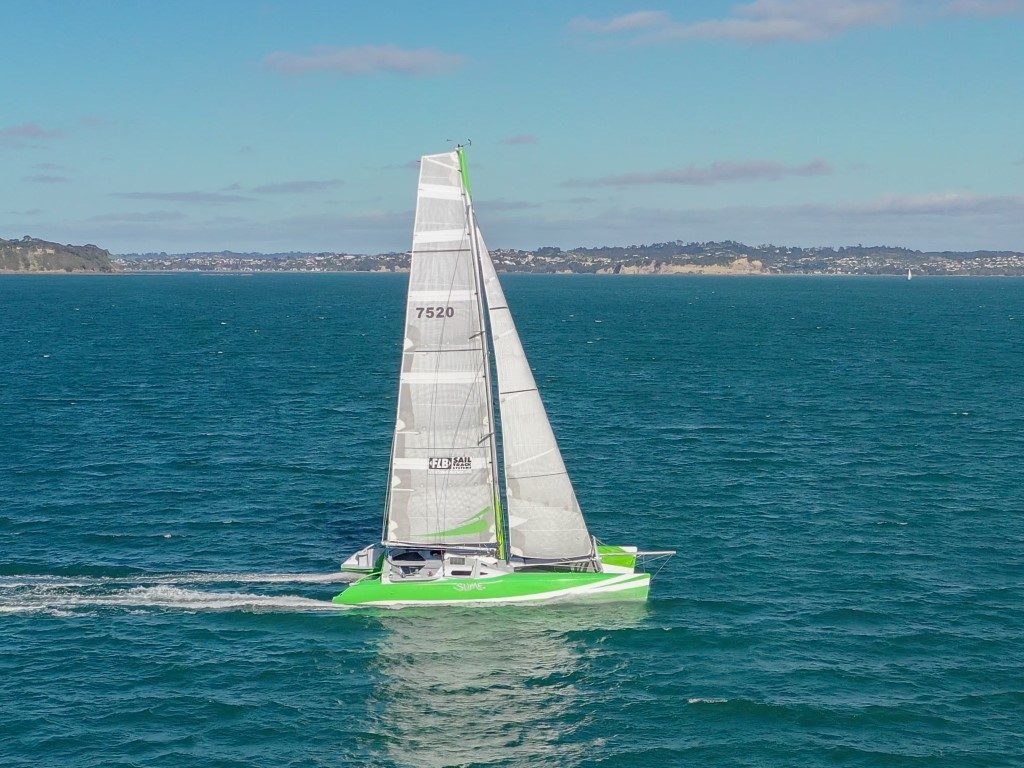 Small details impress – like the built-in hand holds on the transom. Or the discreetly-crafted cover that hides the outboard controls, or the custom-designed carbon companionway hatches. Even the deck locker hatches have unique carbon hinges that allow the hatch to lie back flat, with no hinge above the deck line.
Hughes’ philosophy is to create the lightest, strongest structure using most of the usual deck gear – not attached by bolts but built with carbon and moulded into the boat itself in effort to save weight. 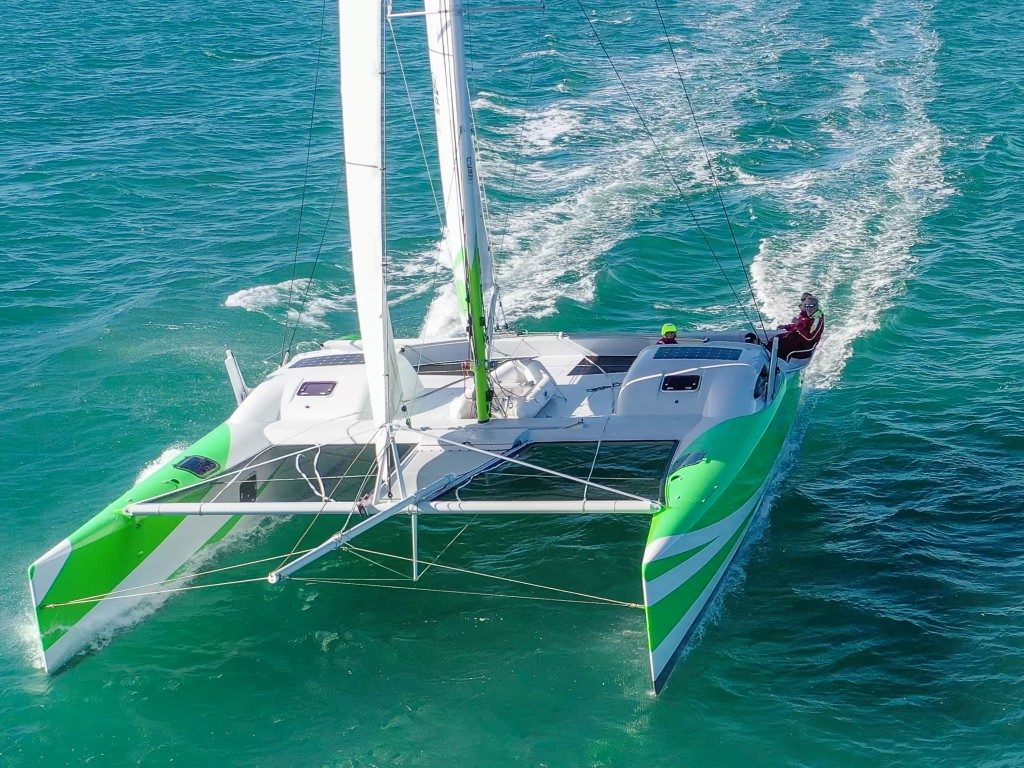 Consequently, all the Dyneema shrouds are tied on, rudders are lifted with cords, and even the simple carbon foldaway stairs down the companionways reflect the simplicity of the design. Slime weighs in at just 3.1 tonnes.
Her self-tacking sail plan is simple and efficient. With that well-balanced helm, it’s a leisurely walk across the 8.8m beam to the other cockpit when tacking. There’s no sense of skittishness – Slime’s like a train on tracks.
At speed she’s wet to leeward and the odd slap creeps along the windward hull. But that’s to be expected at 24 knots. She claws upwind happily at 16 knots, pointing higher than many monohulls thanks to her slim hulls, tight headsail angles and large centreboards. The speed becomes an illusion. 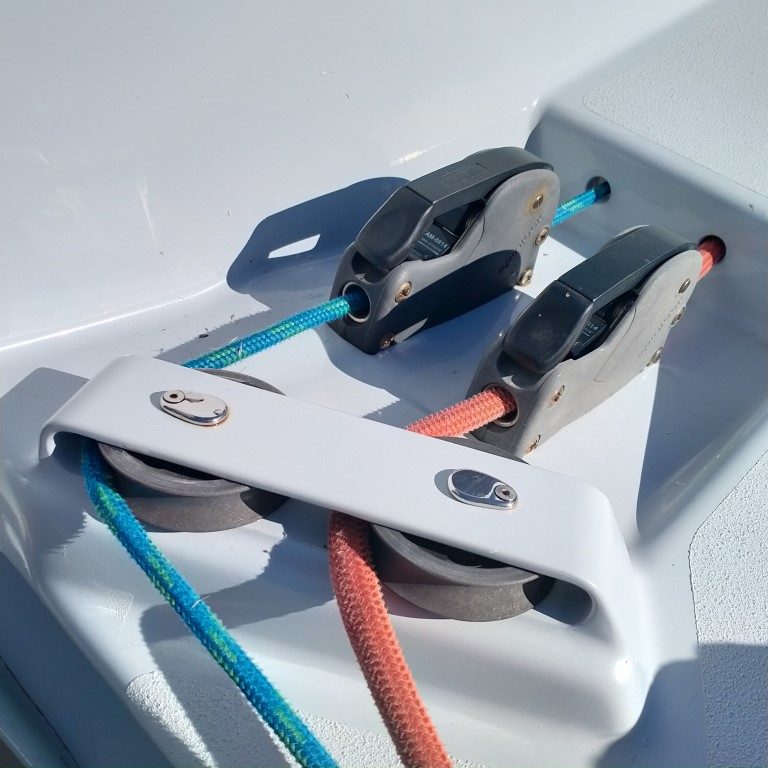 Slime is in her element with two-sail reaching, especially once the self-tacking headsail is replaced with the Code 0. The Evolution string laminate mainsail has two reefing points, though she remains well-behaved with just the first reef. The headsail also has a reefing point. 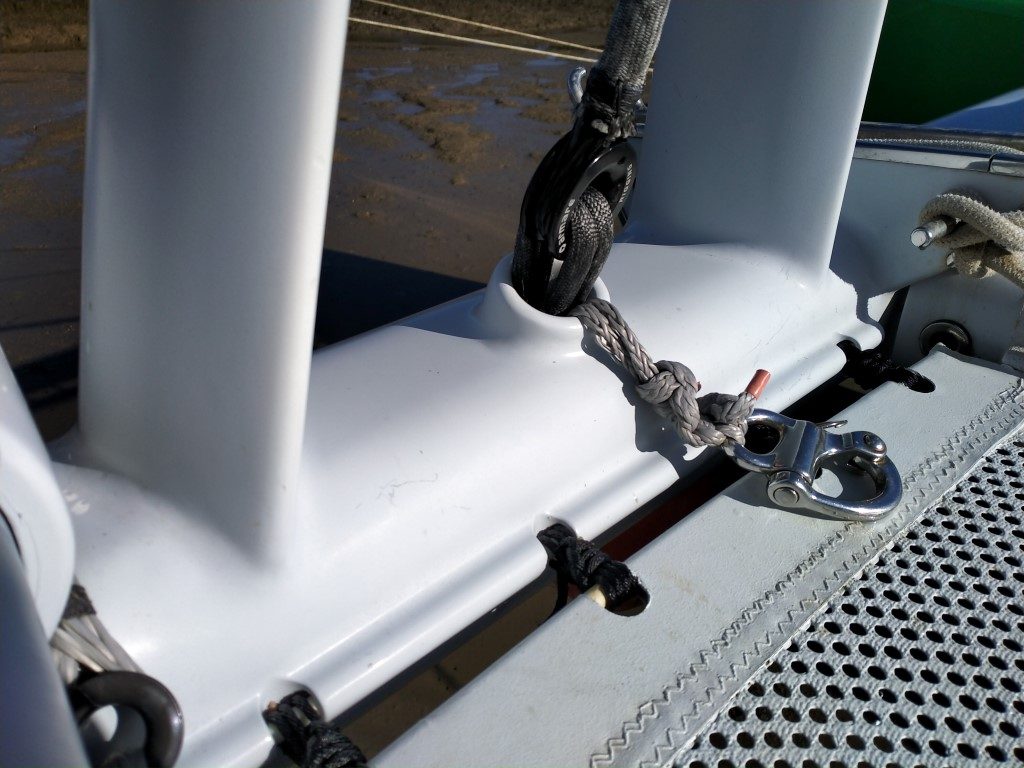 She knows how to boogie but is never out of step and remains as sure-footed as ever in big winds. As Hughes observed, with us boiling along at 20 knots: “This is her most comfortable cruising speed.” And it was. The boat was flat, stable, and the twin wakes streaming out the back were the only visceral sensation of the speed. Even dolphins struggled to keep up.
With sails stowed her huge deck area and trampoline become an excellent rest and relaxation platform. And when the boards and rudders are raised she can drop you off on the beach. 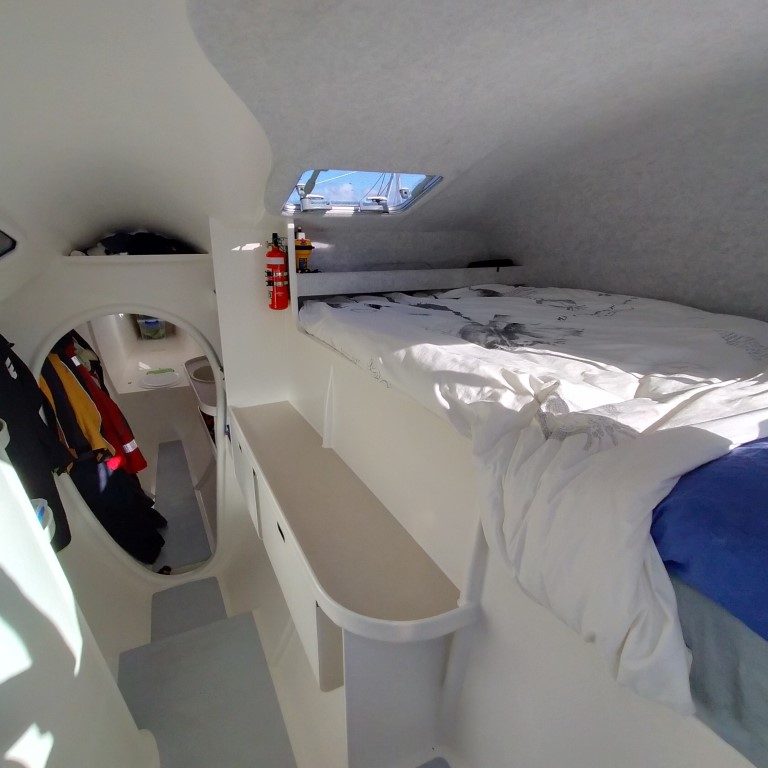 To save weight there isn’t a windlass – but hand-deployment-and-retrieval isn’t too bad when you’re only in a couple of metres of water. The twin anchors are stowed in custom-made slots.
With its electric lowering mechanism the single, Yamaha 25hp outboard (mounted on a centre pod) reflects Hughes’ commitment to efficient design. The outboard can be swiveled 45° left/right using cockpit controls – it makes for easy manoeuvring – and pushes her along at an easy 10 knots. 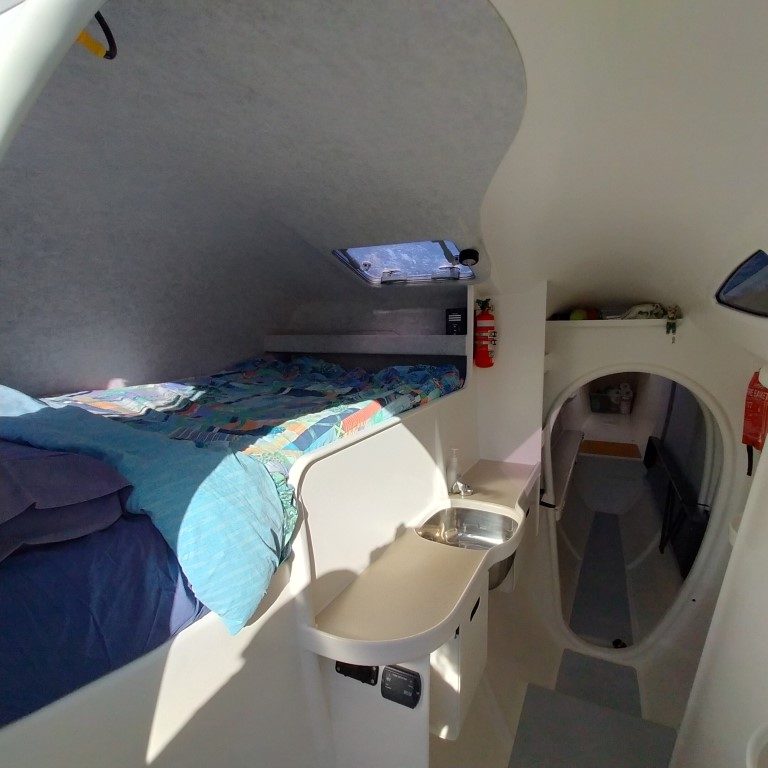 Stepping off the boat at the end of a day’s sailing, there’s only one way to sum up the giddy elation – smile, you’ve been on Slime./>