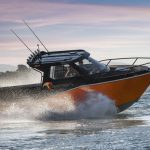 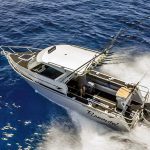 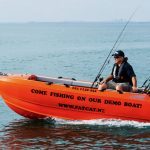 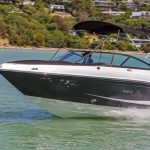 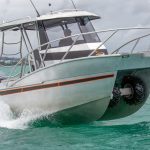 While bigger isn’t always better, lengthening the Offshore Boats 650 HT by a metre has made an already impressive aluminium trailer boat even more of a bluewater weapon.

The latest offering from Northland manufacturer Offshore Boats is the 750 HT (hardtop). Jonathan Barlow and his team took their sweet-riding, Alan Walker-designed 650 HT (Boating NZ, October 2020) as their starting point, retaining the same 2.4m beam but adding a metre to her length. The extra length translates to an even bigger cockpit and a hardtop and cabin that both feel more spacious. 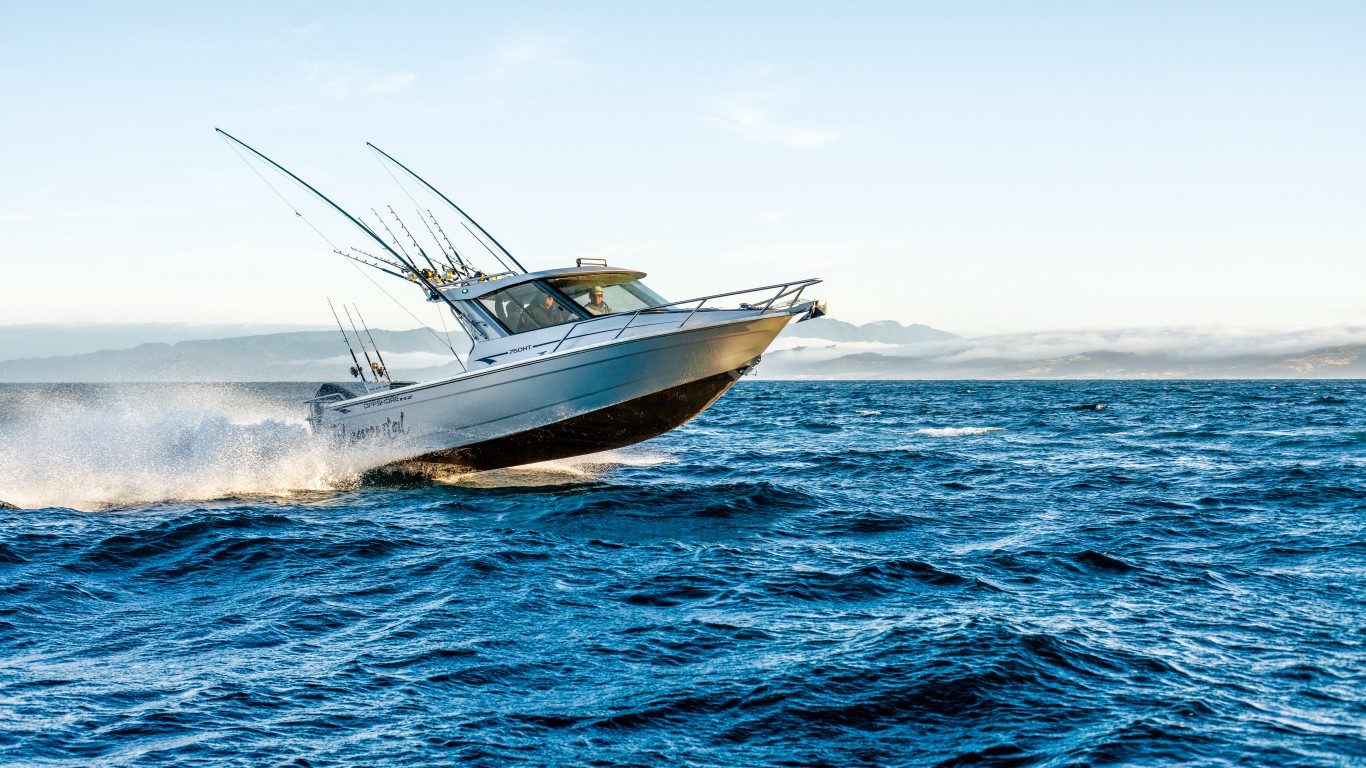 The boat reviewed here – Elemental – is owned by Kerikeri resident Roger Talbot. Roger’s a keen angler with a particular interest in game fishing, so Elemental is fully game-rigged, including top-of-the-line OceanBlue outrigger poles, a centre-rigged pole for the shotgun lure and Offshore Boats’ standard tuna tubes set into the transom on either side. Roger couldn’t join us but was more than happy for the Offshore Boats team to borrow Elemental for the day.
Elemental is the ‘wide’ hardtop version of the 750 with the hardtop’s sides pushed outboard at the expense of the side decks. These are narrow, but still workable thanks to grab rails on the hardtop roof and bow rails that extend well aft. Roger specified the wider hardtop to better accommodate his large frame.
With the wider hardtop, the 750 HT is somewhat sensitive to lateral trim, explains Barlow, but Lenco trim tabs easily compensate and any sensitivity disappears at higher speeds when the bow’s trimmed up. The Offshore Boats 750 hull will also be offered in narrower hardtop and centre-console configurations.
Boating was lucky enough to join Barlow and crew aboard Elemental early one Sunday morning at Omapere, nestled beside the entrance to Hokianga Harbour. Daryl Benyon’s Xceed, the Offshore 650 HT Boating reviewed a few months back, would accompany us for the day. 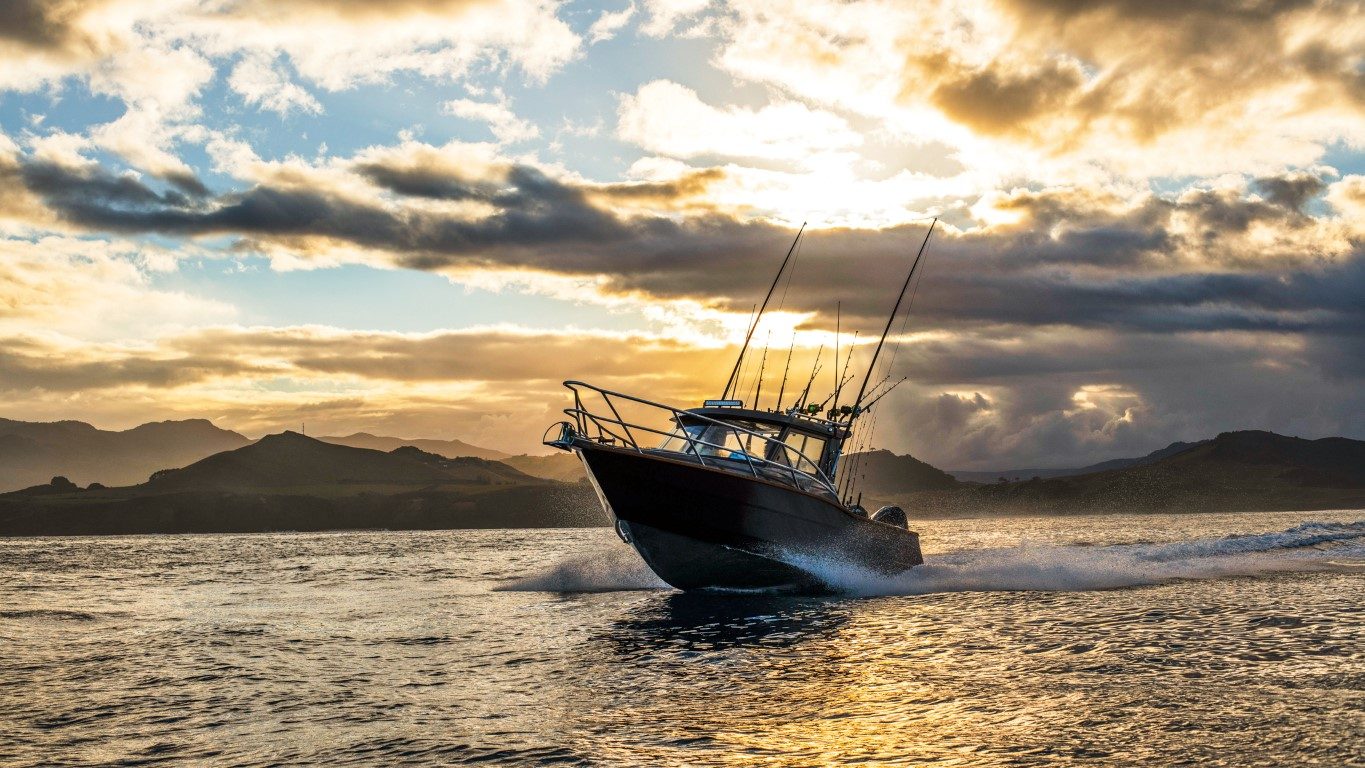 This is a spectacular part of the country and the early morning sun reflecting off the sand dunes as we launched was truly breathtaking. Elemental is carried on a high-quality CAM aluminium trailer, braked on both axles and furnished with a power winch and handy Boat Catch system.
Our plan was to head over the bar and several kilometres offshore towards to an area where marlin had been caught recently. We’d spend a good part of the day trolling, breaking things up with a bit of jigging for kingfish and finishing off with a drop to two out deep for hapuku, bass and gemfish. Elemental carries 300 litres of fuel, so a full day on the water, or a whole weekend, is not a problem.
She certainly looked like a dedicated sport fisher, her 10-position rocket launcher festooned with Shimano Talica 50 two-speeds on straight- and bent-butt rods, jigging rods and a couple of deep-drop rods with Shimano electric reels stowed on the bunks forward.
Once clear of the coast with around 85m of 19.2°C water under the keel, the outrigger poles were deployed and Jonathan, aided by deckie Paul, deployed a spread of five lures in our wake: one off each outrigger, two short corners and a fifth off the centre rigger in the shotgun position. 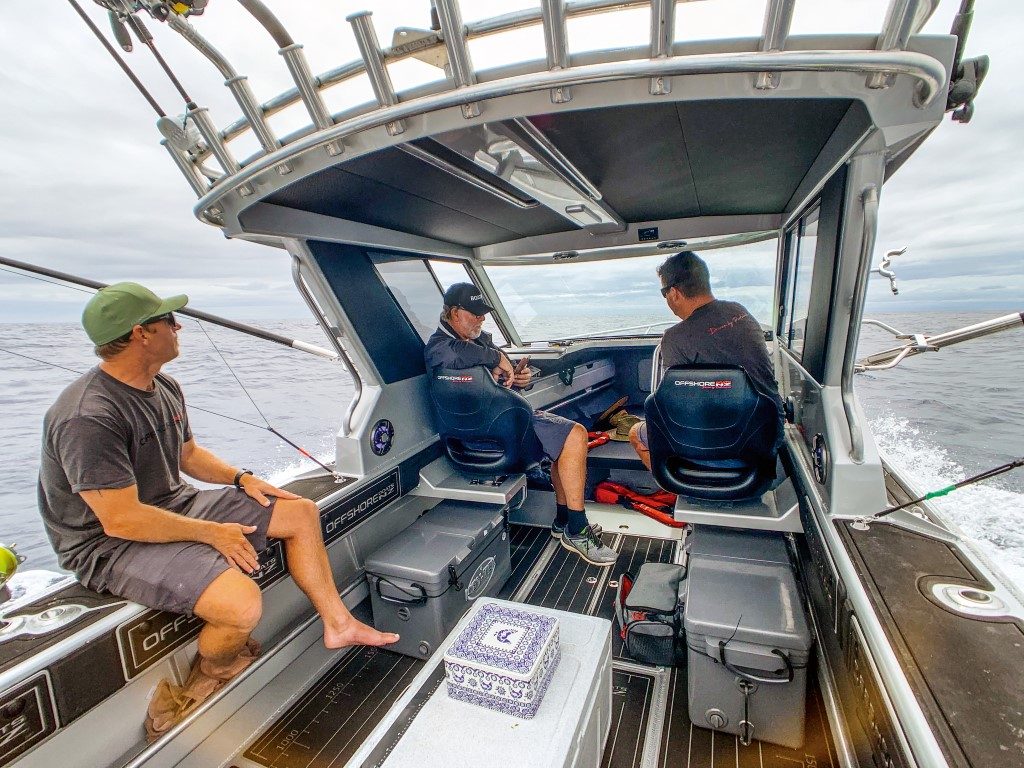 Sea conditions early in the day were pretty good, if a little less perfect than we had hoped for, especially with the wind forecast to build later. Nevertheless, trolling into the wind and swell was comfortable enough. At trolling speed, around 6.5 knots, the V8 Mercury Pro XS 300hp sounds very relaxed, even more so with the optional ‘sports’ exhaust turned off. With the sun out and the coastline slowly slipping by as we headed south, it was a very pleasant way to spend a morning.
Despite our vigilant lure watching, our spread of lures popping and fizzing in the wake elicited no interest from marauding marlin. Even a bungee line run short for albacore and skipjack went unmolested. While the Simrad sounder showed plenty of bait and the water colour was an encouraging shade of blue, there was no birdlife to speak of and no chatter on the VHF either. 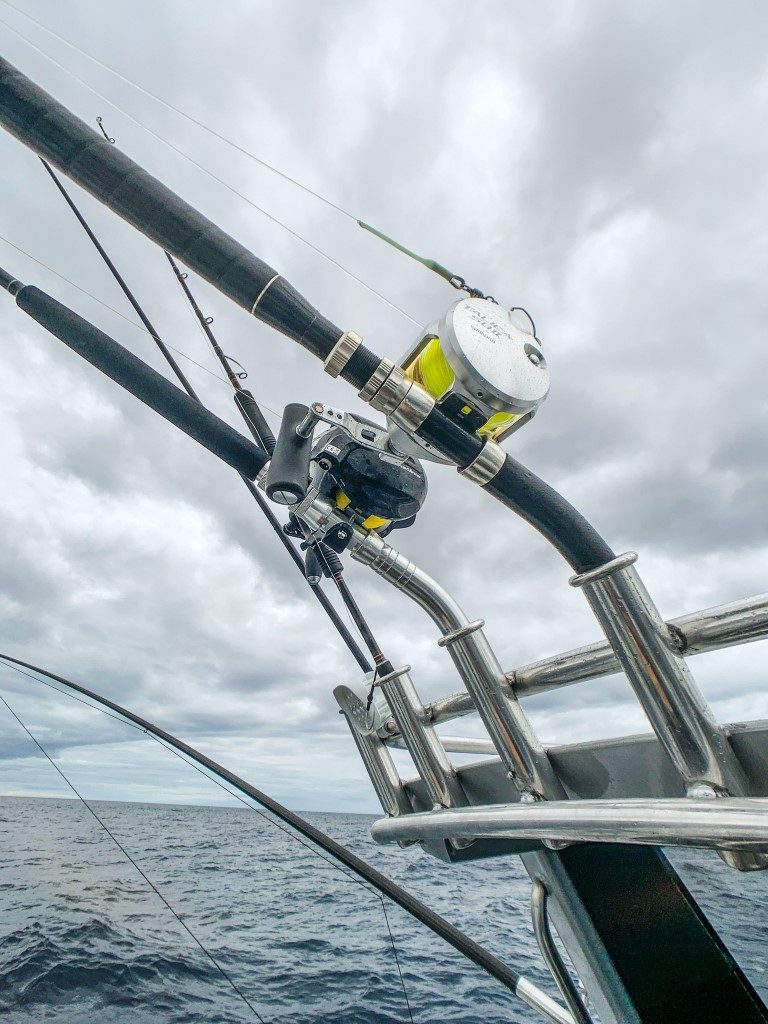 The 750 HT proved to be in its element, though, punching through building seas with the Mercury maintaining a steady trolling speed and the hardtop sheltering us from any spray. The nicely upholstered bucket seats at the front are cantilevered from the boat’s sides. That leaves room under each for a large Icey Tek chilly bin, which also serves as a rear seat (cushions are optional). The front seats are fully adjustable and also swivel: sitting in a comfortable seat facing aft with your feet on the chilly bin is a great way to watch the lures in the wake.
A feature of this model is the full-length side shelves that extend all the way from the transom to the forward bulkhead. They’re long enough for fishing rods, tag poles or other difficult-to-stow items and wide enough for dive bottles. Underfloor lockers swallow dive bags, dive bottles and other bulky items.
Offshore Boats goes to a lot of effort to achieve a top-end finish on its boats. The 750 HT is nicely detailed and trimmed. U-Dek is used extensively, adding comfort and warmth to the alloy, and the hardtop’s carbon-look black vinyl headlining and side panelling enhances the quality feel. The lined forward cabin is nicely appointed, too, with provision for a toilet, generous v-berths and plenty of shelving space. 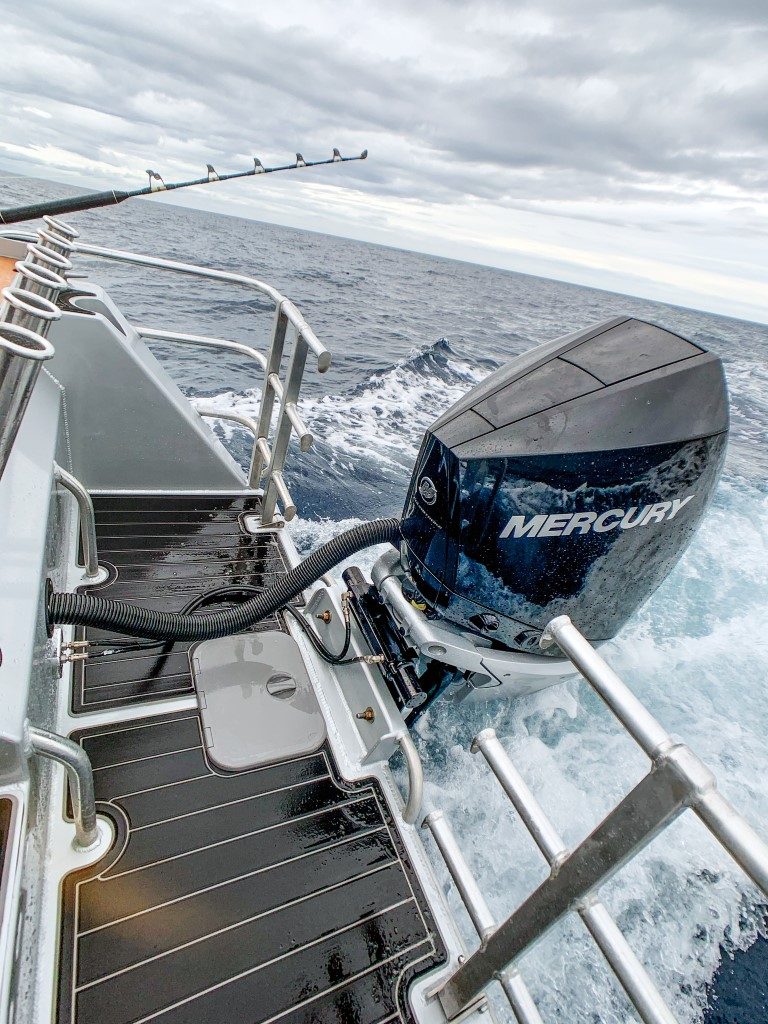 An open bulkhead makes both the cabin and hardtop feel more spacious while the large forward hatch affords good access to the foredeck and ground tackle. Elemental is fitted with a MaxSet 10 stainless steel anchor and a Maxwell capstan.
With marlin fishing slow, Barlow made the call to break up the day by jigging for kingfish. The vessel’s Simrad black box sounder and 19-inch MFD was put to work in split-screen mode, displaying chart and fish finder simultaneously. Jonathan alternated between sounder frequencies to suit the depth – the boat has a pair of 1kW through-hull transducers.
We joined several other boats to drop jigs into 150m of water with good fish sign showing near the structure. The optimum place to fish from was the aft platform, inside the cage. Jonathan held the boat in position stern to wind until the jigs got to the right depth. Hook-ups were almost instantaneous, although barracouta also crashed the party, removing a couple of expensive jigs. 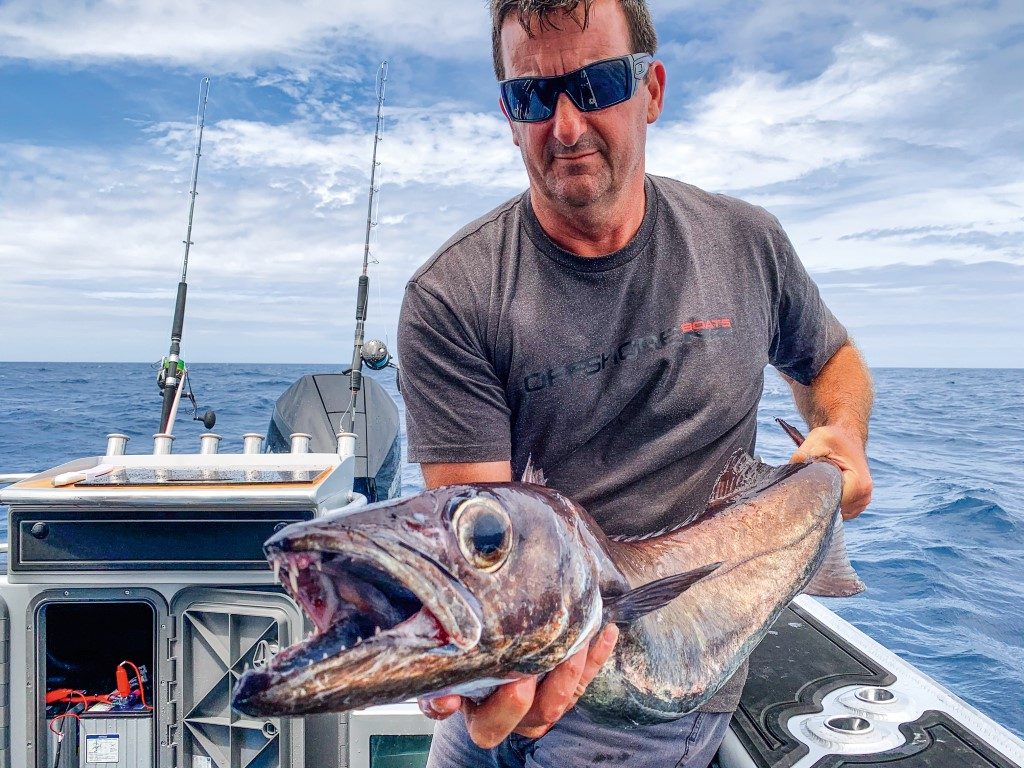 We put a couple of nice kingfish on ice, releasing the rest. It was fun fishing, but jig fishing is hard work and after an hour and a half we’d had enough. We sluiced the cockpit down with the high-pressure washdown, put the jigging gear away and left the other boats to it.
By now the wind had picked up enough to make fishing conditions at the hapuku spot marginal for deep-dropping. It was now or never. Barlow’s marks were about six nautical miles further out to sea, so we secured the boat, made ourselves comfortable and pushed up onto the plane. Elemental is running a four-bladed stainless steel propeller, which provides an impressive hole shot and also holds the boat on the plane at slower speeds.
Although there was at least a metre of sea running, the 750 HT took it in her stride, covering the distance at a comfortable 20 knots. There’s no wiper fitted, but a coat of Rainex did a good job of shedding water from the one-piece windscreen. Visibility is excellent and the sliding side windows provide good ventilation. 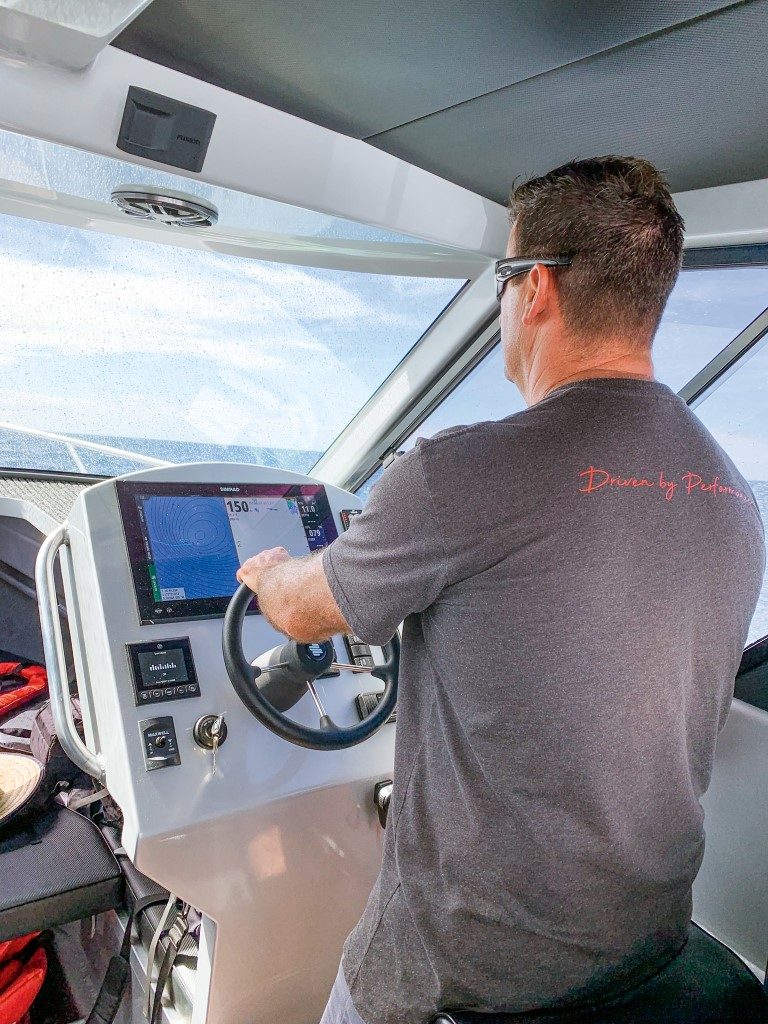 Although the boat has 12V electric reels outlets in the rear corners, Barlow’s reels are fitted with alligator clips not plugs, so he clipped the wires to the house battery terminals: house and start batteries are tucked away in transom lockers protected from the elements.
We elected to fish from inside the cockpit with the drop-in transom door on the port side in place, since a fair bit of water was coming over the rear platform. Once again, hook-ups were instantaneous: as soon as the 20-ounce sinker touched bottom 350m down, the rod loaded up. With the rod in a rod holder, it was simply a matter of letting the reel do the work of bringing the fish to the surface.
The first drop resulted in two double-headers, but of gemfish, not hapuku or bass. A slight positional adjustment had identical results and our last drop also produced gemfish. Oh well, gemfish is a pretty yummy second prize! 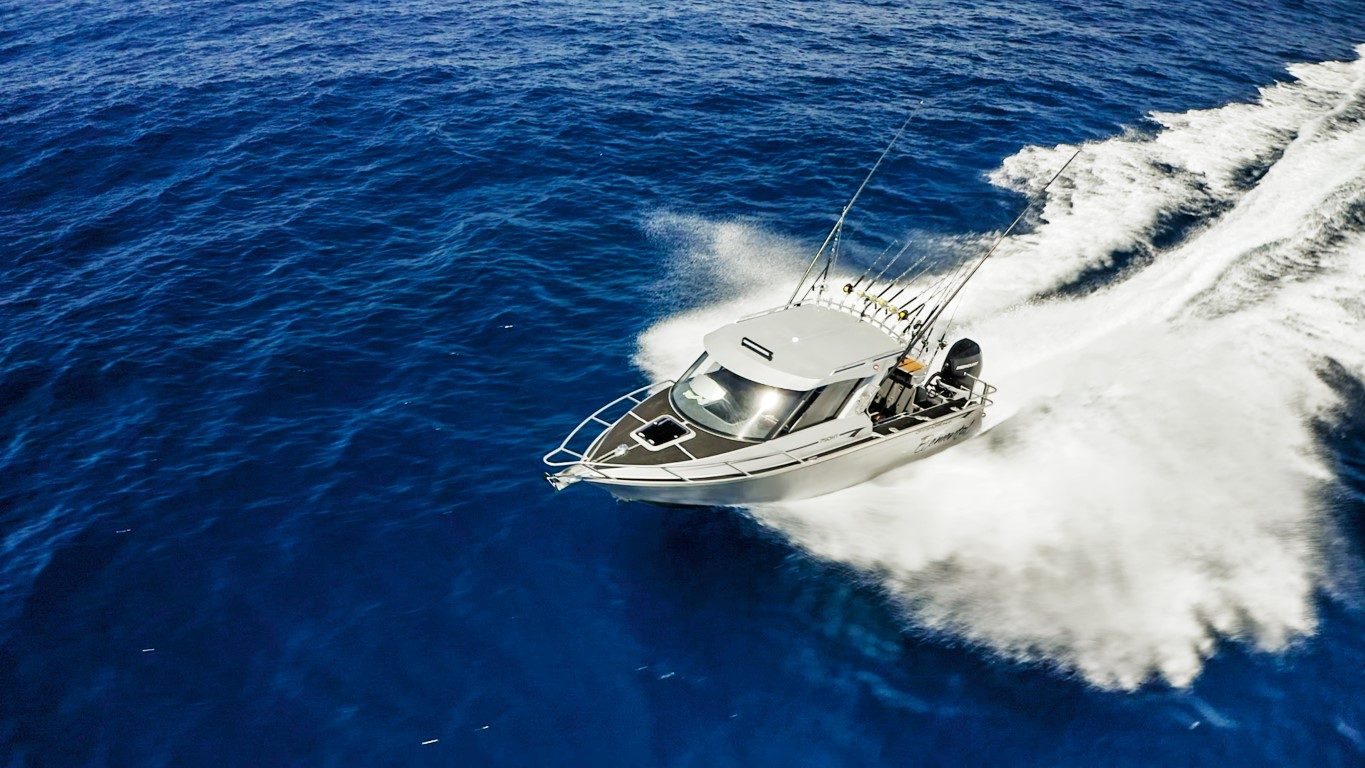 With the fish bin full, the electric reels were stowed and we began the long downwind troll back towards Hokianga. Sadly, I have no marlin to report, not even a strike, but the boat was very comfortable running with the sea. But with the onset of rain, we pulled in the gear, secured the game poles and put the hammer down for the last few miles back to the harbour.
Elemental really showed her pedigree on the homeward run, eating up the miles and easily coping with the sloppy conditions. The boat sprinted to 40 knots, staying mostly in the water with the 18° deadrise hull landing softly when it didn’t. There was never a hint of the boat diving off or broaching and the Merc’s electric-hydraulic steering provided excellent control.
With 8mm bottom plates and heavy-duty construction, the 750 HT feels rock-solid. It offers reassuring handling that only seems to improve with speed. As noted, the trim tabs become almost superfluous when the boat’s running at speed with the bow trimmed up. 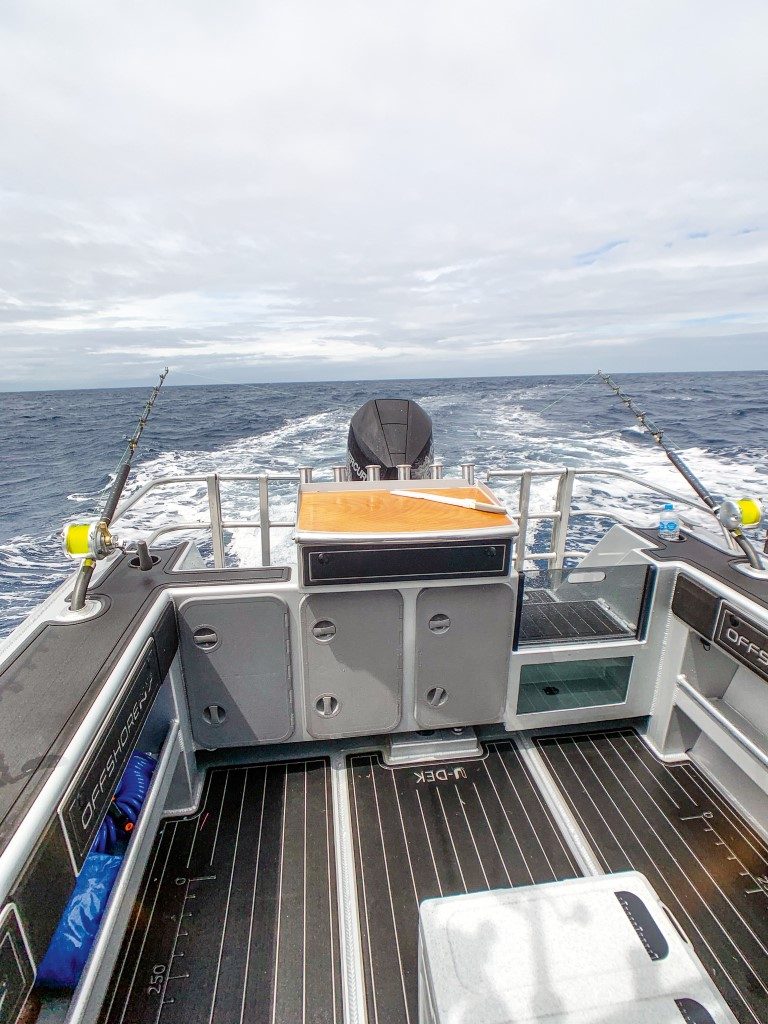 The return bar crossing was no more challenging than our departure, though it was easy to see by the narrowness of the channel and the way the swells lifted over the sandbanks why it can be so dangerous. Inside the harbour, with the Fusion sound system cranked up, we threw the boat around in the flat water, pushing it up to almost 45 knots.
Elemental was safely back on her trailer by 6pm and we were on the road headed for Auckland not long afterwards. During our full day offshore, the 750 HT had shown herself to be completely in her element. Well built, well finished and well equipped, the Offshore Boats 750 HT delivers a safe, comfortable boating experience in a range of conditions. Boating NZ looks forward to sampling the other versions planned for this capable newcomer when they come on stream./>