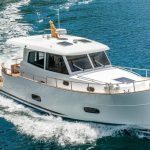 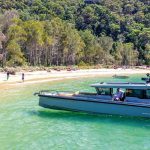 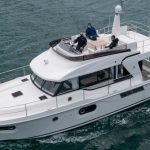 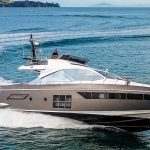 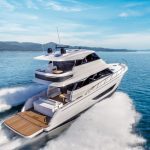 The cartoon cat Garfield is a fat, feline couch spud, but his maritime namesake, launched recently at Opua, is from a completely different litter of kittens.

The 14m power catamaran was built by NSR Alloy Solutions to a hull design developed by Malcolm Tennant/Alan Walker some years ago, specifically to allow canoe stern-type vessels to be computer cut and constructed in aluminium. Alan Walker (Coastdesign) is now the in-house designer at NSR Alloy solutions.
“She’s quite unique,” says Terry Forsbrey, managing director at NSR. “The underwater profile is like a
Canadian canoe – double-ended with fine ends, but she has a chine carried aft to create a large flat section at the stern. This creates buoyancy in her ends to stop her pitching or hobby-horsing in a seaway.
“We’re seeing the end of the big, flat-bottomed boats that rely on heaps of power to get anywhere, burn fuel like crazy and dig big holes in the ocean,” he adds. “We’re getting smart and going back to beautiful slippery shapes like the old Logan launches.” 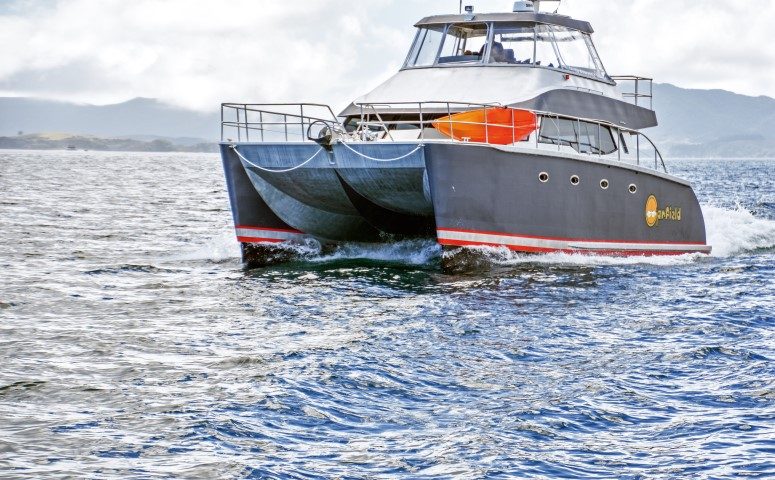 In keeping with her owner’s offshore intentions, the bridge deck has ample clearance to rise over most wave tops and there are sturdy handrails right where they’re needed. Her high topsides should ensure dry decks.
“Originally the boat was going to be 12m LOA to fit the owner’s marina berth,” Alan says, “but she looked a bit boxy – so we drew another metre on to either end and showed the owner and he agreed
that we needed the extra length. It’s made a better boat out of her.”
Seakindliness was a major consideration in Garfield’s development because her Paihia-based owner is planning some adventurous passage-making for the 6m-beam cat.
“The owner fits our profile completely,” Forsbrey explains.
“He’s an experienced offshore yachtie who’s getting on a bit, but still wants to go voyaging – without having to get out on deck at 3am to change sails.”
A 15m version is currently being lofted at NSR Alloy’s Opua workshop for a similar client with offshore passagemaking in mind.
Build time for Garfield was 14 months with some finish work and trim done by the owner. Hull plating is 6mm 5083 marine grade alloy on her shapely underwater sections, 5mm on the topsides and 4mm for the deck and cabin.
All alloy surfaces were covered by carbon-black, adhesive vinyl wrap by Northland company Fusion Graphics, and the interior painted with Pyrotech sound paint which helps with acoustic and thermal insulation. It also reduces fire risk.
“I wanted more of a workboat finish – not a toy boat,” Garfield’s owner Peter says. This approach is also obvious in the solid alloy box section rails and deck hardware.
Each hull has three watertight bulkheads and four tanks, forward and aft, to carry her 3,800 litres of fuel. Transfer pumps were installed to pump the fuel to wherever it’s needed and Racor filters take care of any impurities that find their way aboard.

Power’s supplied by two V6 Hyundai VS270J common-rail diesels, each pumping out 270hp at 3,800rpm. This output reaches the four-bladed 24 x 23 Briski propellers via ZF 2:1 hydraulic gearboxes spinning 45mm stainless shafts. Exhaust gases are funnelled overboard through underwater tail pipes which leave just a muted burble to indicate that the engines are on the job.
Engine orders are sent by Teleflex wireless control.
Garfield’s fast cruising speed is 20 knots and top speed is 23 knots, but the ‘sweet spot’ for cruising is 1,850rpm which equates to about 9.5 knots, Terry says. “That’s fast enough – particularly
if it gets a bit lumpy. But she’s really very civilised – there’s no pounding or crashing in a seaway at all.”
But the good news is that the boat’s total fuel consumption at that speed is about 15 litres an hour – or 1.64 litres per nautical mile – giving her a theoretical range of just over 2,300 miles.
“That’s almost to Aussie and back – or one way across the Tasman with a really healthy reserve left in the tanks,” Peter says. He’s already planning a bit of offshore passage-making with a maiden voyage to the Marlborough Sounds via the west coast within the next few months, and an extended trip into the Pacific next winter.
Entrance to the deckhouse is via a sliding door from the large deck aft. A beautifully-crafted kauri dining table on the starboard side is designed to seat six people for convivial meal times while
whoever’s on cooking duty has an expansive work place in the huge galley to port.
A full-size stainless steel fridge/freezer is also located on the starboard side and there’s an under-bench dishwasher to take care of the onerous task of cleaning the crockery.
“We didn’t want to have a generator chugging away all the time – so all the domestic electronics run off a 700 amp-hour battery bank through an Outback inverter,” Peter explains. “We’ve got 600
watts of solar panels on the roof and engine alternators to keep everything charged.” 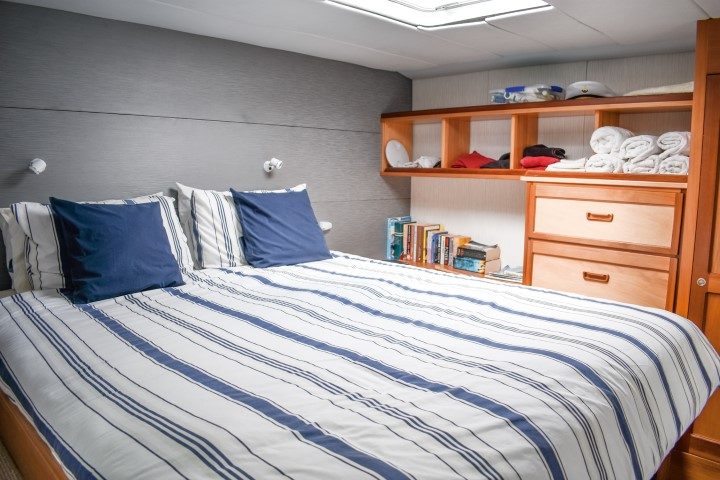 Garfield’s saloon area has opening windows on the windscreen forward and on the side: “That’ll give us a good cross-breeze through the boat to keep us cool in the tropics – I didn’t want AC on board if I could help it,” Peter says.
There’s 500 litres of fresh water tankage on board, as well as a 160 litres per hour Open Ocean watermaker, built by a NSR Alloy Solutions subsidiary, to keep them topped up. Both toilets are
fresh water flushed.
To starboard a homely master cabin features an athwartship queen-size bunk surrounded by handy storage and book shelves. Access to a roomy en-suite toilet and shower is off the cabin and aft of them is a handy utility pace with washing machine and watermaker. “There’s room for a workbench and tool stowage too,” Peter says. “It’s a work in progress.”

Another few stairs down to the port hull leads to the guest cabin which also has a queen-size island berth – but with one important difference. The mattress can be split into two and a divider put between the two halves. “That’s if you go fishing with a couple of guys – and they don’t want to sleep together.”
Immediately aft of that cabin is another space fitted with a king-size bed. “I suspect that’ll become a general storage area,“ Peter says.
Two Simrad 12-inch MFDs and a Simrad 4G radar keep an eye on Garfield’s whereabouts with Class A AIS receiver overlays and an AP 28 Simrad autopilot to keep her on track. There are two steering stations – a wheel on the flybridge and toggle stick below – with two pneumatic seats taking the shock out of any rough ride on the flybridge.
A removeable electric 250kg crane and davit will be fitted on deck aft of the flybridge to make light work of tender launching and recovery, and a Lofrans electric windlass forward launches and recovers the 40kg Manson anchor and 100m of 10mm chain. 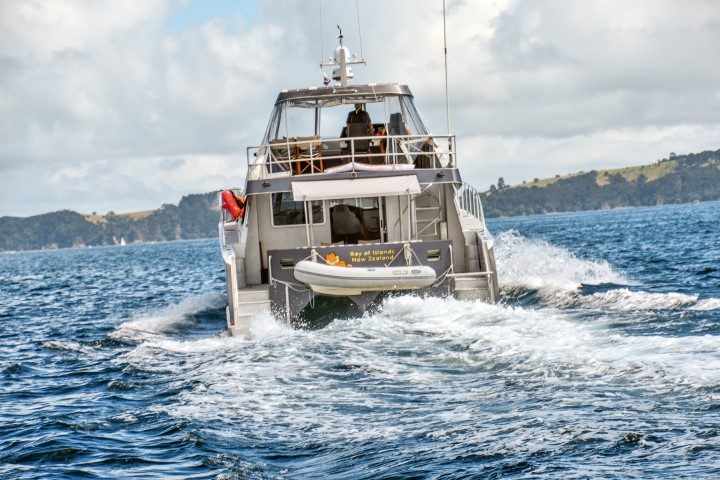 “I still feel a bit insecure about going to sea without a mast and sails,” Peter says, “but we tried her on one engine to see what she’d do. She initially veered off course but as we got way on she tracked well with only a little bit of rudder needed to offset the imbalance. She pottered along nicely at about 7.5 knots.”
This Garfield is one cat that really will be getting off the couch./>