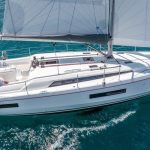 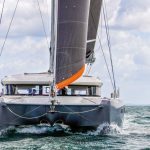 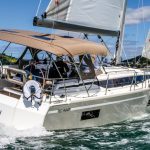 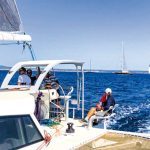 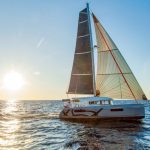 Harnessing the inherent speed in a lightweight carbon trimaran design while still having a spacious cruising boat is the secret of Rapido Trimarans’ success.

Years ago, at the start of his new project building larger cruising trimarans, I met and talked with Rapido co-owner, Paul Koch. It was an interesting conversation, without hyperbole and very factual. It was a very no-nonsense Australian-style approach, in fact. “The whole Rapido trimaran concept came about because we felt the world needed a larger, roomier, cruising trimaran with good living space that delivered great performance,” he said. 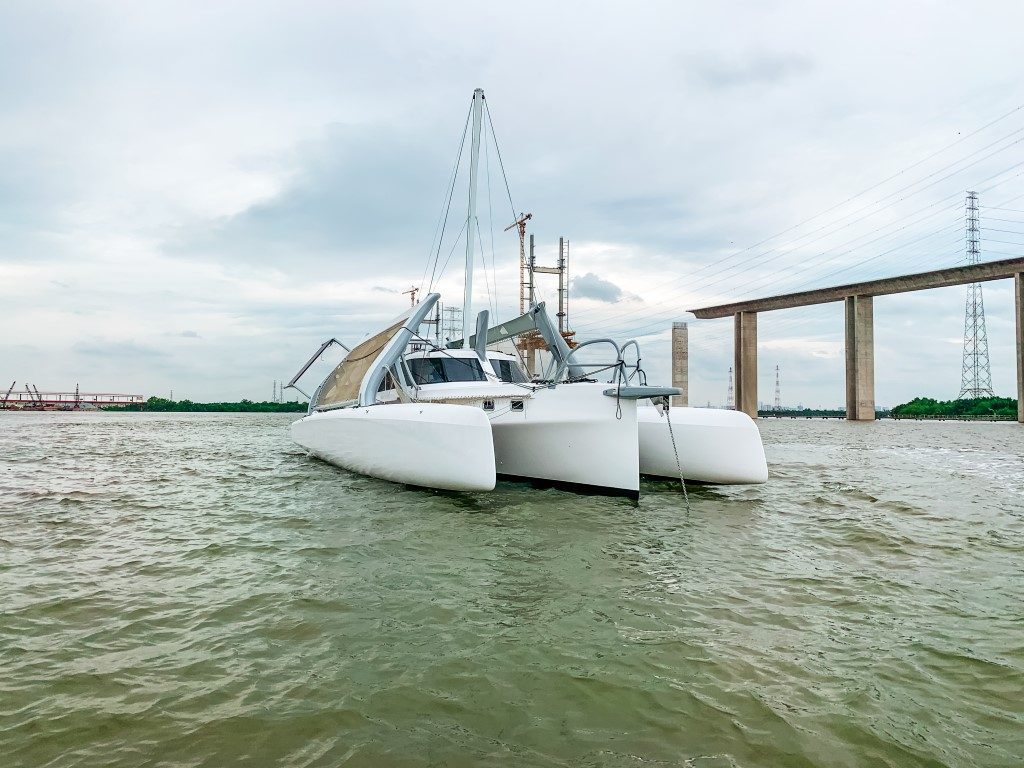 Since then, Koch and his business partner Richard Eyre have launched the Rapido 60 and 50, with the keenly awaited Rapido 40 not far away. An early 60, Romanza, was sold to a New Zealand couple.
During the years, I watched the steady development of what is one of the few cruiser-racer trimaran designs and even recall racing against Rapido 60 Hull #1 at the King’s Cup in Thailand in 2016. For keen sailors who want performance, the R60 overtook the TP52 fleet on a hard beat, clocking 16 knots.
The four crew were relaxing on the nets while the 16-person crew on the TP52 were on the rail!
In another race, an IRC 1 monohull tried to luff the R60 up and failed. So, the pointing ability of the R60 is right up there with racing monohulls.

Morelli and Melvin
Mention design and the illustrious names Morelli and Melvin come to mind. They applied the latest technology when designing all three Rapido models, including clever use of Computational Fluid Dynamics, Finite Element Analysis and Velocity Prediction Program. “The innovation in design comes with the layout of the main hull and reaching the balance between beam, draft and trim to carry the accommodation without too much compromise on performance,” said Pete Melvin.
On the 40 and 50 models, Rapido overcomes the main issue faced by trimarans – berthing – by using folding amas. Separately, the Rapido 60 has a unique, highly innovative design that allows the main beams to be unplugged for shipping.
The folding concept was already proven in Koch’s previous trimaran builds, which utilised the Farrier-designed folding system. He was the owner of Corsair Marine, where he was directly involved in the production of over 1,500 trimarans from 1994-2010. An enhanced carbon version of the folding amas has been developed for Rapido. In addition, this patented folding mechanism keeps the amas in the upright position, ensuring that the sides remain free from fouling. 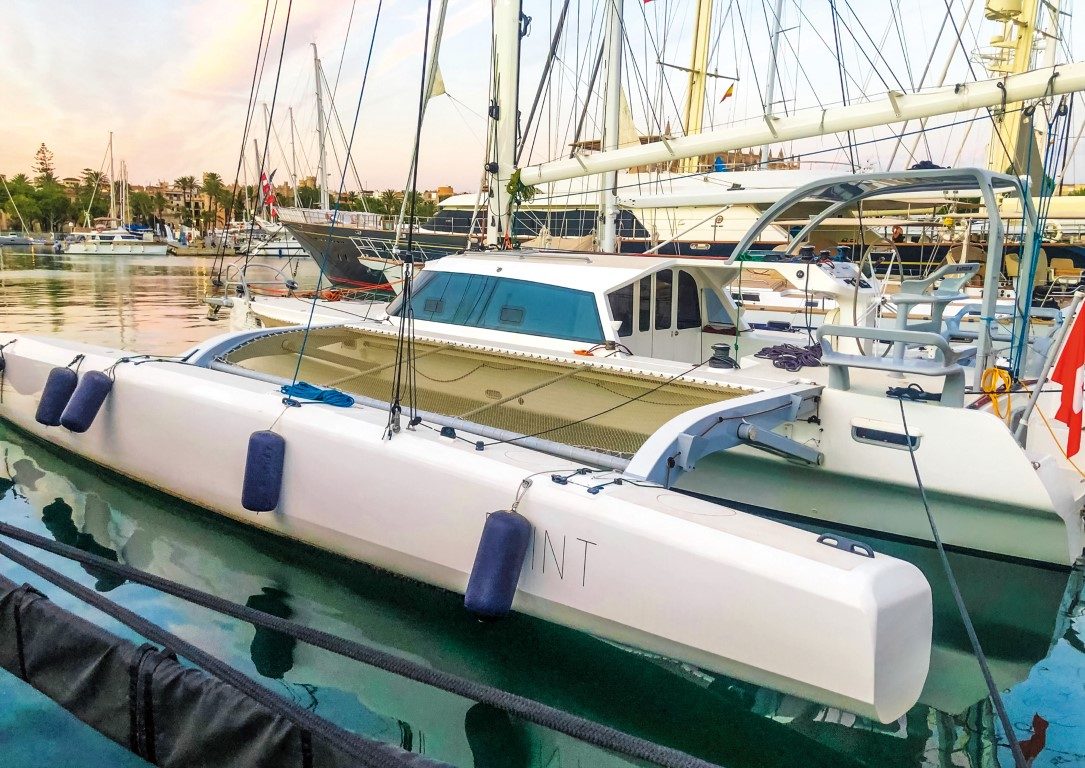 Fast-forward to 2021 and Rapido’s high-tech manufacturing arm Triac Composites not only builds all three models, it also did all tooling at its modern factory in Vietnam. The factory boasts a list of equipment which includes a seven-axis Kuka milling robot, autoclave, CNC machine, high-speed digital carbon cloth cutting machine and a dedicated spray booth. It is also capable of vacuum infusion and resin transfer moulding.
The first R50 has just launched in Spain in July, first the R40 will be launched in October and the proven R60 has just been ordered by YouTube sensations, Sailing La Vagabonde, a young Aussie couple upgrading from a catamaran.

Cruise faster
There are good reasons to consider a trimaran, especially if looking to combine the best sailing features of a monohull with the stability of a catamaran. Trimarans can offer exhilarating performance while maintaining complete control. Trimarans are the fastest, safest offshore boats, as demonstrated by the massive French 105-foot (32m) Ultim trimarans keeping the (round-the-world) Jules Verne Trophy in their possession thanks to their record-breaking speed.
My assignments have taken me on some of these beauties, including one of the newest, the Ultim Sodebo, several ORMA 60s and a crazily powerful MOD70 that I enjoyed for a race at Hamilton Island Race Week. But for mere mortals like me, it’s the humbler boats I have really enjoyed sailing, such as the versatile Dragonfly, spacious Neels, nimble Corsairs and classic Farriers. Now Rapido ups the ante considerably with its high-tech carbon beauties. 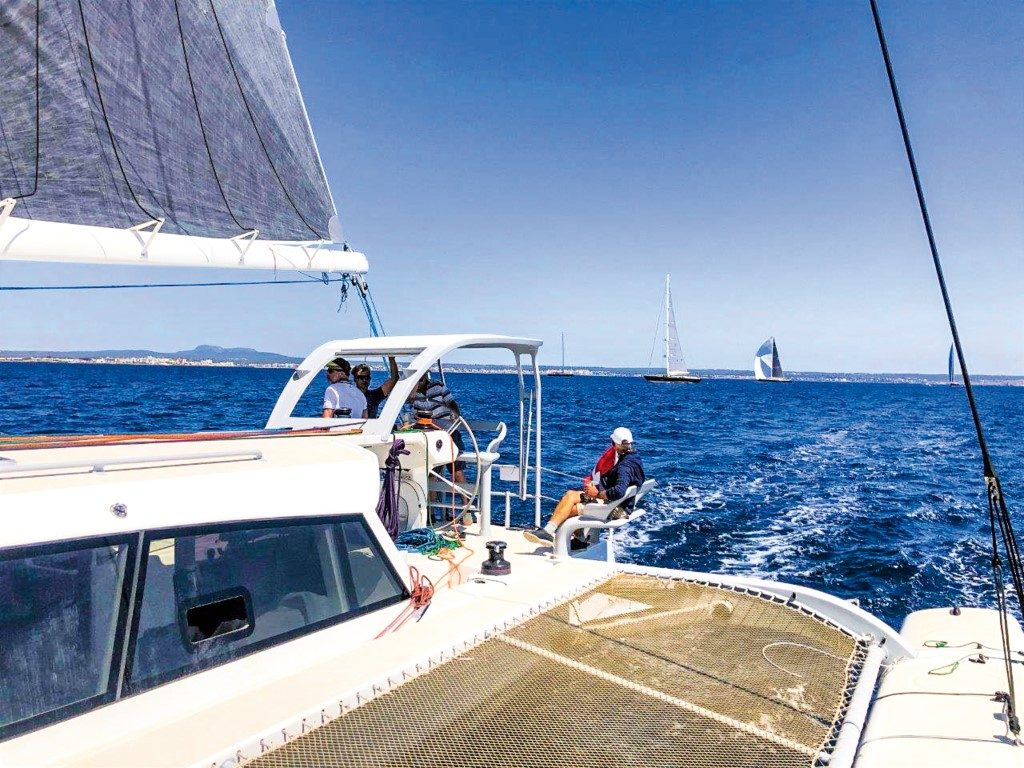 Despite their vast differences, what all these trimarans share is a performance efficiency which rewards the discerning and, I hasten to add, the experienced sailor. For example, I’ve buried the ama of a small Corsair, which was fairly alarming, but I can’t imagine the mayhem if I were to do this on a 60-foot Rapido offshore at high speed (polars show it doing at least half the true wind speed in lower ranges and a figure of 25 knots at 20 knots of true wind!). However, thanks to the meticulous design of Morrelli & Melvin, the boat is actually very forgiving, according to owners. The massive buoyancy of the amas and righting moment has been built into the design of all the Rapido models, setting Rapido apart as a very safe, stable boat. 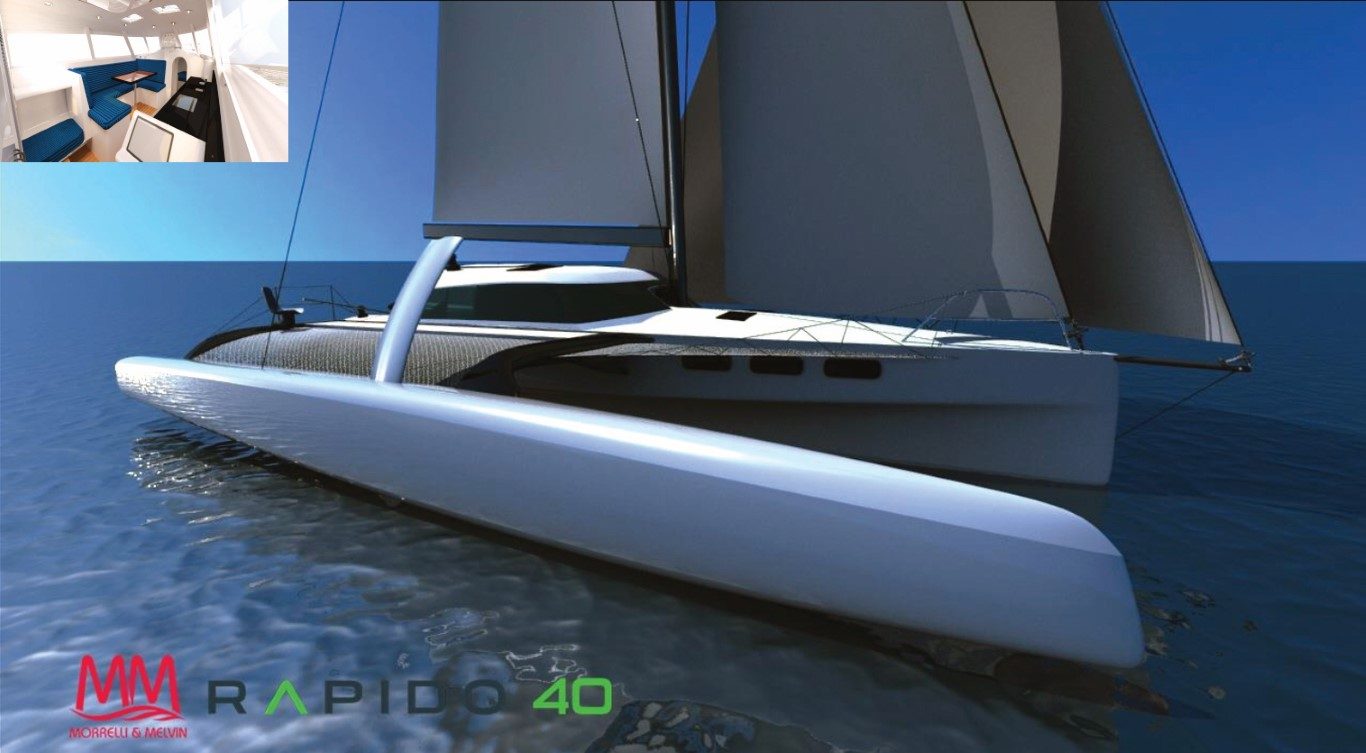 Safety, in fact, is a driving factor in Rapido. Carbon-foam sandwich construction combined with watertight bulkheads in the amas and main hull (even the engine compartment is enclosed with watertight bulkheads fore and aft) ensure the boats are virtually impossible to sink. The Rapido offers performance with incredible stability for fast passage-making and safe ocean crossings. The inherent stability of a trimaran with its nearly square design and weight centred in the middle creates a monohull-style sailing experience with multihull stability.

Liveability
One of the perceived downsides of trimarans is living space and carrying capacity. In fact, often the first sensation experienced by people boarding the R60 and the R50 for the first time is the great feeling of space, as the crew from La Vagabonde declared on their test sail. There is an aft deck with side seating and an extra-wide helm seat for more than one. Then there are the expansive nets and a huge foredeck.
The cockpit and saloon/dining/galley are all on one level and the door to the saloon can swing up into the roof when not in use so that the whole area opens into one enormous space. The daggerboard dominates the saloon on the 50 and 60, but the new 40 has ‘C’ foils in the amas and this completely removes the need for a daggerboard case in the saloon, which further opens the interior space. 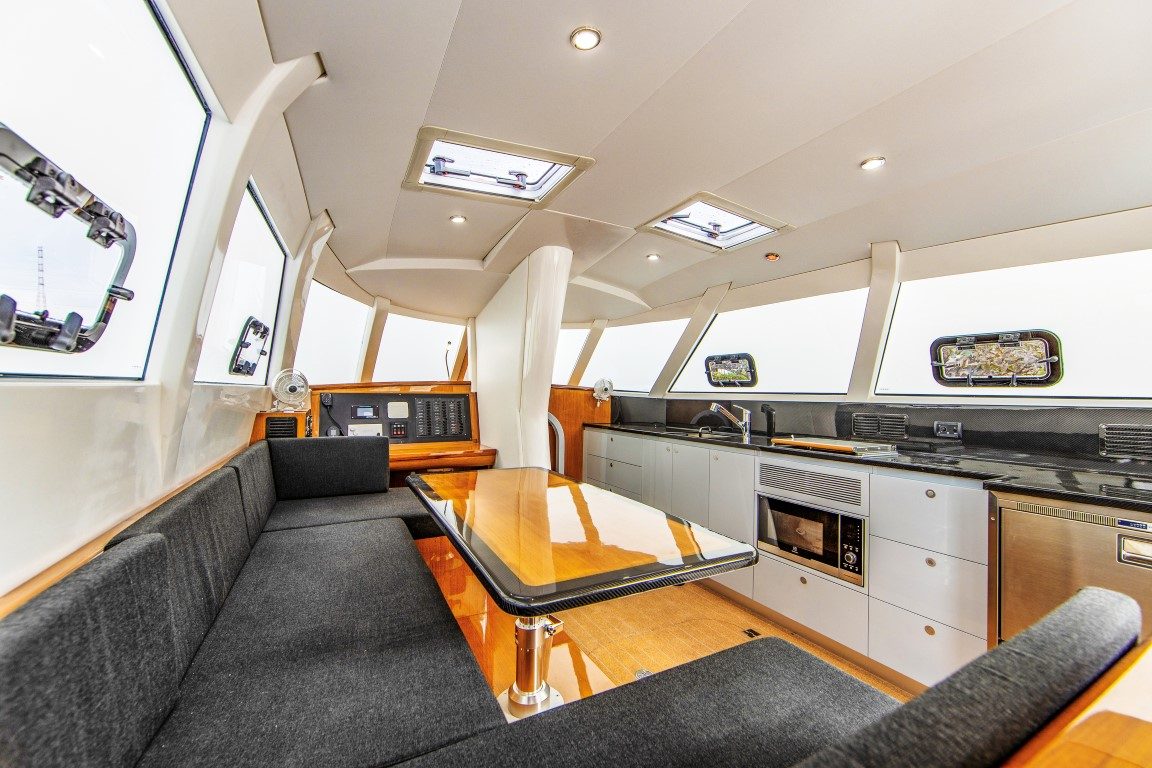 The elevated helm station gives good vision, and all the sail controls lead back there. This elevated floor plan creates the volume required in the bilges for the engine and tankage, which centres and lowers weight – just like a monohull (and unlike a catamaran). The aft of the saloon can be open or closed, depending on the prevailing weather or sea conditions.
Inside, the forward master cabin is a double with generous storage, thanks to it being deeper in the hull than the saloon. The cabin includes a head with separate shower compartment. An escape hatch is here, along with one on the stern. Alternatively, two single bunks can be added to the forward cabin. The aft cabin has a large double bed with its own head/bathroom. The saloon has an L-shaped settee and table opposite the longitudinal galley, which is well equipped with hob, oven and a deep sink.
The new 50 has better vision all-round, thanks to forward facing windows which can be frosted instantly – literally – with the flick of a switch. It also has a navigation station alongside the settee. Headroom inside both the 60 and 50 is two-metres-plus. Furnishings, doors and other fixtures are foam-cored with veneers for lightness, fully integrated into the hull for rigidity. The entire fit-out has rounded surfaces to avoid bruising and surfaces that wipe-clean easily. 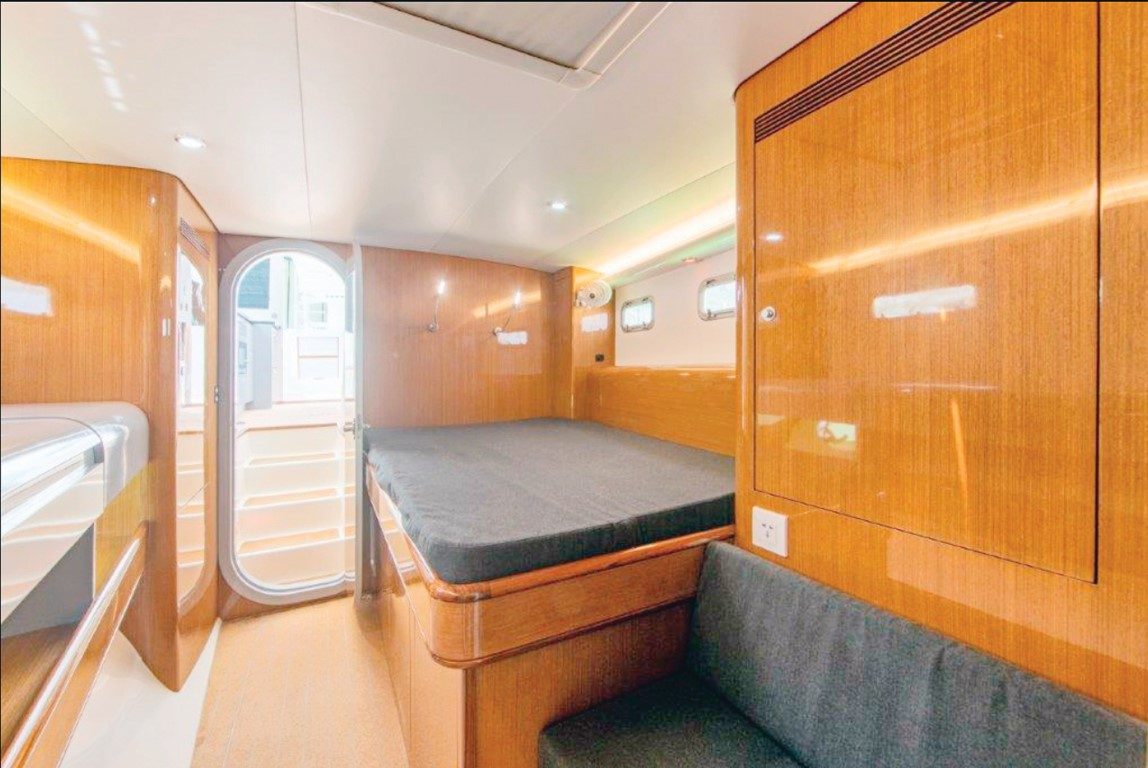 Powerful yet controllable rig
The carbon masts on each model are rotating to maximise performance. The standing rigging is synthetic. An extensive sail plan means there’s a manageable amount of power available, both upwind and downwind – an important safety consideration in a fast boat like this. The furling Solent genoa, mounted on the inner forestay, is self-tacking and the mainsail reefing system uses Karver reef hooks mounted on Dyneema straps around the boom to distribute the loads with minimal chafe. The boom has truss wings with netting to catch the full-battened mainsail, which is on Antal sliders for easy hoisting, reefing and furling.
A furling fractional Code 0 and a masthead furling gennaker tack on the bow just ahead of the headstay. Two Harken winches on the cabin top forward of the helm station handle main and Solent sheet loads. Rope clutches for halyards, mast rotation and board up and down controls are positioned to use the same winches. 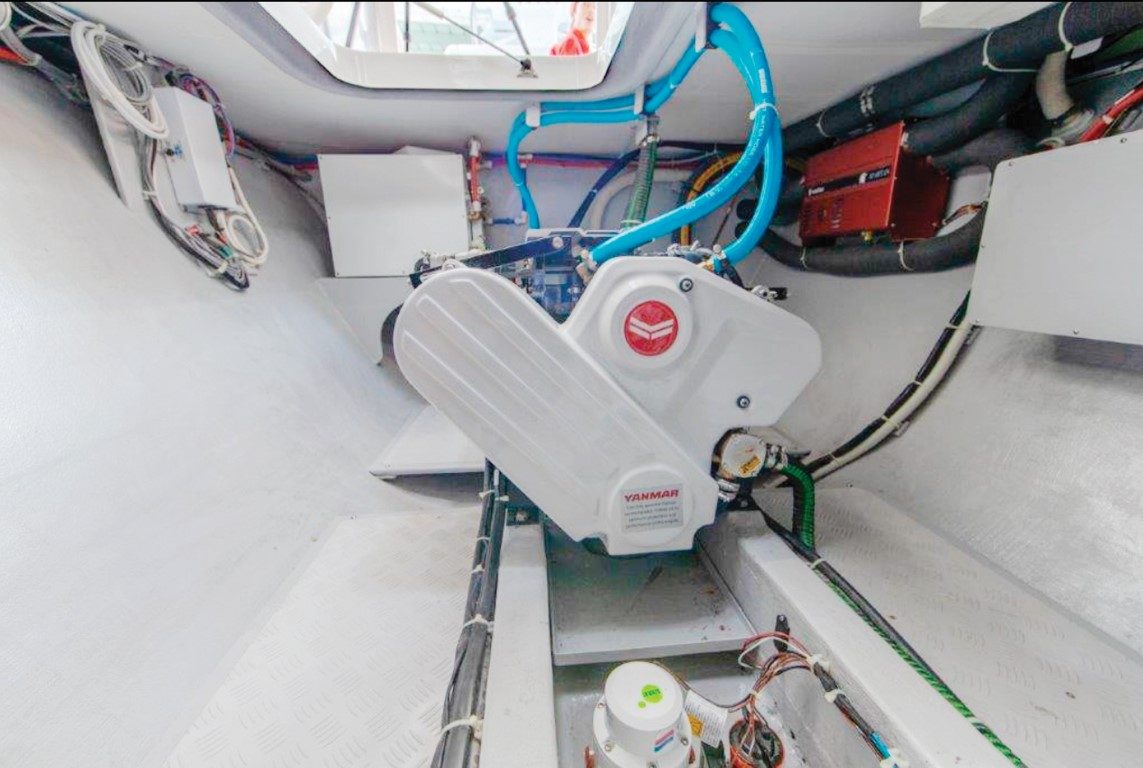 This efficient use of systems extends right through the design, says Pete Melvin: “Compared with cruising cats, cruising trimarans in general are much simpler for their reliance on only one system for steering and propulsion.” For example, the full-access engine room on the Rapido 60 is next to the daggerboard case at the weight-centre of the boat. All parts of the Yanmar four-cylinder 53hp diesel are accessible from all sides. This space includes the fuel tank, an optional 8kW generator and space for water makers and other options.

Stiff hull
Rapido use infused carbon/vinylester laminates on closed-cell PVC cores for high-strength areas and E-glass with carbon elsewhere. Vinylester is used in the hull and deck laminates for good adhesion and better compatibility with the gelcoat finish. Epoxy laminates are used in the structural elements of the boat. 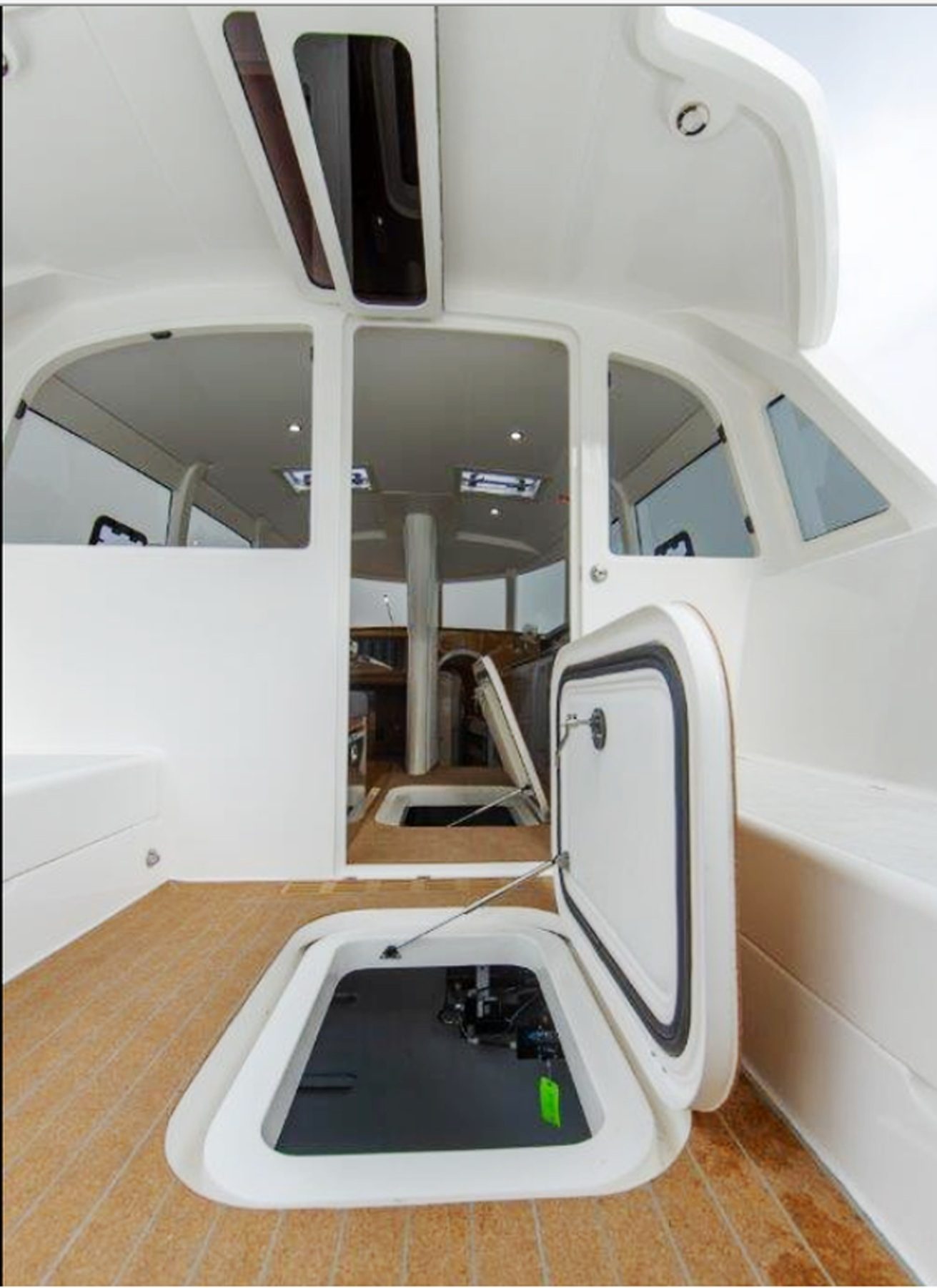 The build conforms to ISO/CE standards and CE Category A certification. “We use pre-preg carbon for the high-strength parts such as the cross beams (which are cured in the autoclave), chainplates and bulkheads,” says Koch. Key hull features included watertight bulkheads and the extensive use of carbon fibre. Triac Composites’ experienced engineering team and its use of sophisticated technology ensures stringent interpretation of Morrelli and Melvin’s drawings, aided by the trust of Koch’s 30-year association with the designers.

Young Aussie couple, Riley Whitelum and Elayna Carausu went from backpackers to superstar sailors via their video posts on YouTube. These gleaned them enough subscribers (a staggering 1.6 million) to enable them to sail full time. Recently, their fame was extended when they took teenage environmental activist Greta Thunberg across the Atlantic in order to reduce her carbon travel emissions.
The couple began their sailing life on a small monohull and then an Outremer catamaran before ordering the Rapido 60. “We started looking to upgrade and while
I wanted a boat that could go fast, I’m much more interested in average crossing times.
I mean, it’s good fun to go fast but that’s the least important on my list of things. I want to be able to go at a good pace safely,” said Riley.

New Zealand Sea Trial
After an extensive 18-month global search, well-documented on their YouTube channel, the family flew to New Zealand in 2019 for a sea trial with Paul Koch on the Rapido 60 Romanza, owned by Dougall and Jaz Love. The couple were duly impressed, as Riley recalls: “I know that the Rapido sails unbelievably well, which is the main thrust behind all of our decision making… The only thing I was worried about was the amount of space on board.” 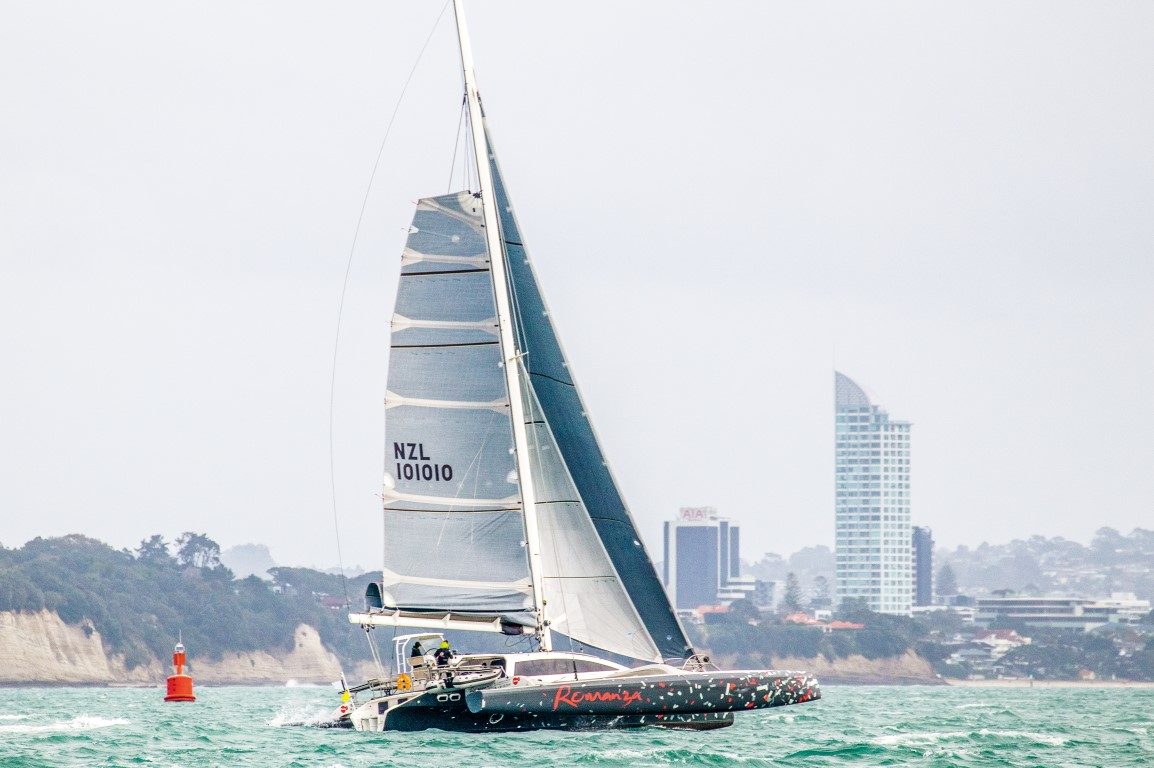 However, after visiting Romanza the couple were more than happy. “When you’re standing in the saloon, you’re actually standing in a huge room.” The couple has just had their second child, so Elayna had her own priorities for the new boat: “One thing that is really important for us with the trimaran is that Riley can sail it single-handed because we will have two kids on the boat.”
The new boat will be named La Vagabonde III and launch in 2022.
Sailing La Vagabonde/>