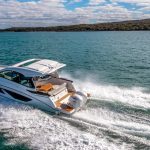 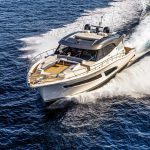 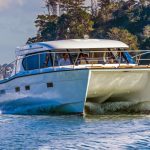 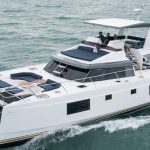 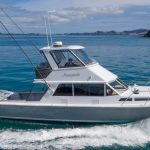 A bit like the fabled phoenix, old Corsairs never die – they get reborn. Under the knife of a master surgeon scores of these iconic Kiwi ladies have enjoyed magical transformations. Masquerade is the latest.

Some 45 years after she rolled off the Salthouse production line, Masquerade isn’t immediately recognisable as a Mark 1 Corsair. The core genes remain but compared to her original lines she presents a far sleeker profile these days. More svelte and elegant, she’s lost a heap of weight – all thanks to the steady hands of Kerikeri boatbuilder Chris Bartlett.
Bartlett has developed something of a reputation for these classic makeovers – particularly Formula and Salthouse cruisers. It’s widely accepted that what disappears into the depths of his shed will emerge looking very different. Masquerade – his third Corsair Mark 1 project – is a classic example. 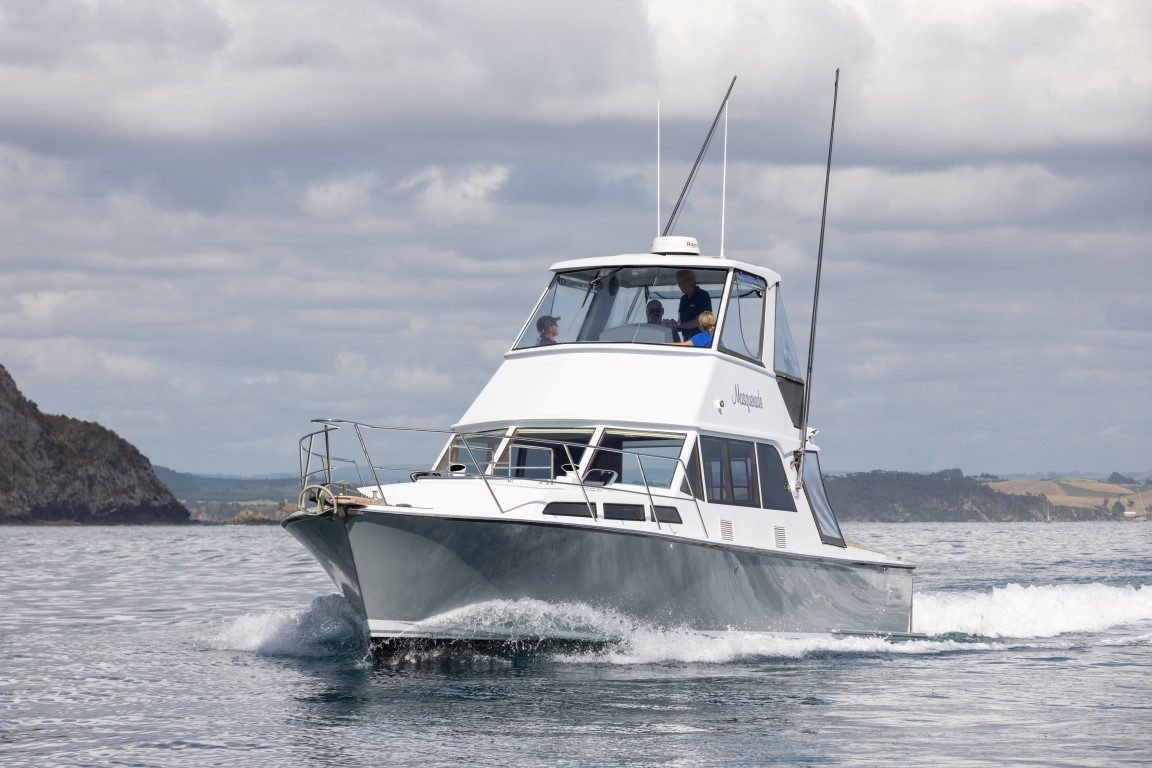 His work, he admits, is shaped by an element of nostalgia: “I don’t like to see beautiful old classics disappearing or decaying into obscurity. These boats are a part of our heritage – they deserve to be saved. I enjoy keeping vessels like this going – they’re not just another European import – each one has an individual identity.”
Which is fortunate for the likes of Auckland’s Trevor and Annie Harbrow – Masquerade’s owners. The couple bought her in 2012 for reasons that dove-tailed neatly with Bartlett’s sentiments – “we like Kiwiana. These are good boats with a solid reputation for their sea-keeping qualities – we wanted to be involved in preserving the Corsair pedigree.” 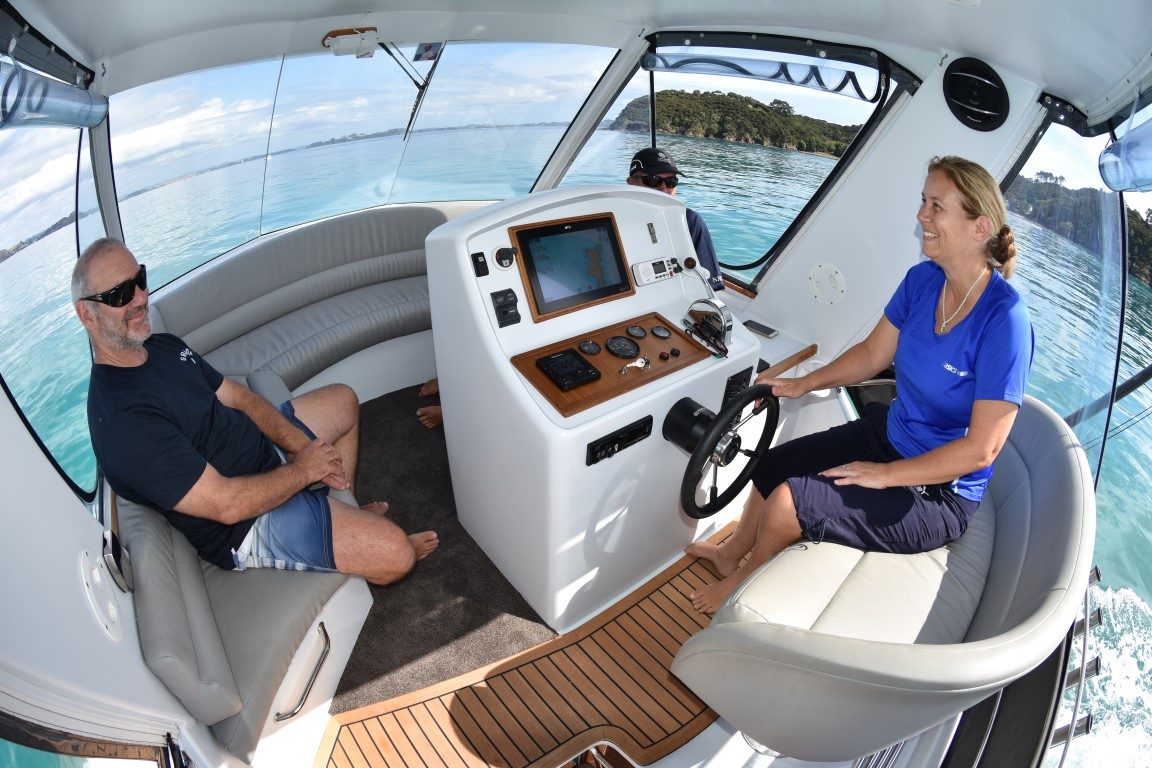 As keen anglers (“game fishing is in our blood”) Masquerade had an added resonance for the Harbrows. Launched in 1976 she was built for charter fishing (operating from Tauranga) and was one of the first Corsairs to go into survey. Her then owner later had her stern extended (by the Salthouse yard) and she became immensely successful. Rumour has it her exclusive charter clientele included members of British royalty.
Though they enjoyed Masquerade for a few years, the Harbrows’ ultimate goal was refurbishment. “We wanted to modernise her – she carried a very dated interior with faded décor and much of her equipment was tired. We knew a good designer could make much better use of her interior volume. And we particularly wanted to change the flybridge.”
And as any newcomer to the ‘Corsair Club’ soon discovers, Bartlett’s name kept cropping up in refurbishment conversations and plans. And so it came to pass – he would be their ‘makeover man.’

Makeover
Masquerade’s new life began in 2018 and fell into two distinct phases – Phase 1 the exterior and construction of the new flybridge, and Phase 2 the interior, which began in 2020. Of course, in what has now become the sub-text in every recent boatbuilding project, Covid lockdown delayed Phase 2.

“But there was a silver lining,” says Bartlett. “Like many New Zealand-built fibreglass boats of her vintage, Masquerade suffered from severe osmosis. We planed a 2mm layer from her hull and, because the boat was in the shed for around five months – the hull was able to dry out really well before we reapplied the new layers.”
Externally, the most obvious change to the boat is the new flybridge. Where the old unit was relatively small and set well back on the cabin top (leaving an unusable upper deck area) the new unit follows the lines and rake of the cabin’s forward windows. This is an instant aesthetic improvement – it looks far more ‘integrated’ and streamlined.
Much more important though, are the benefits within the flybridge. The original structure comprised a modest helm area and bench seat – and not much else. The new version has transformed the bridge. It features a wraparound, U-shaped settee forward, with the helm station further back, slightly offset to starboard, serviced by a spacious two-seater. 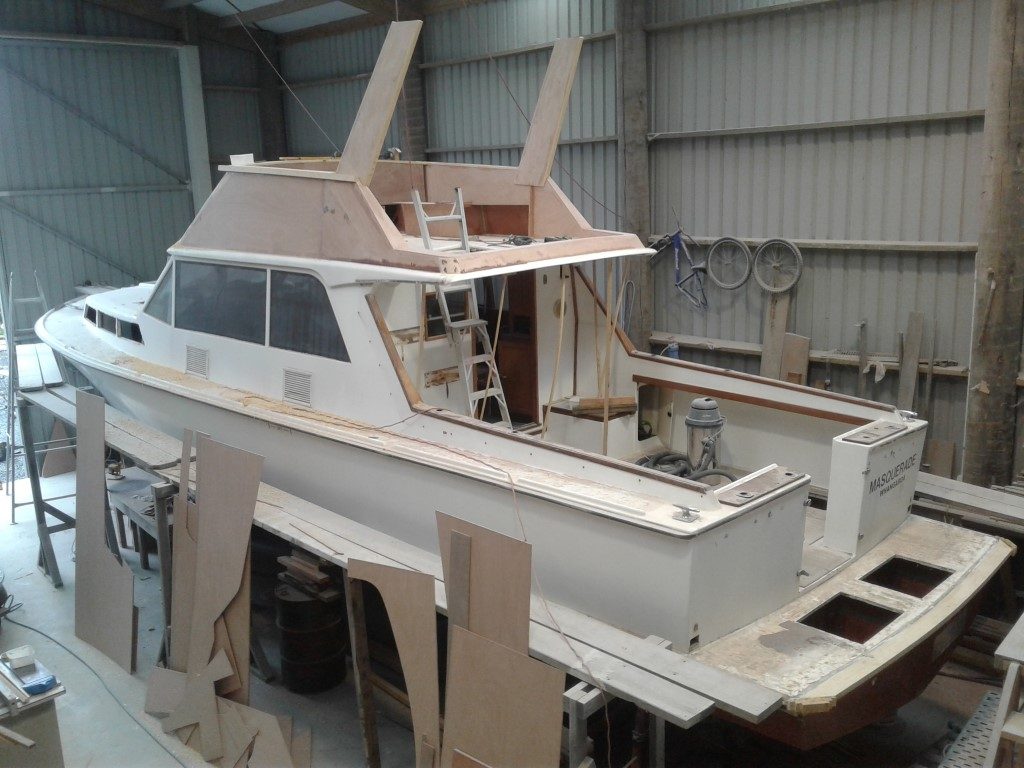 Now seating 6–8 people in comfort, the flybridge has become ‘party central’ – and the 360° views are superb, particularly through the forward windscreen (a three-piece masterpiece free of mullions). These views are very useful when maneuvering the boat into tight spots.
A 12-inch Raymarine MFD dominates her dash – very clean, crisp styling – and the beer fridge built into the helm structure (to starboard) is an inspired piece of design. Entry to the flybridge is aft, via a ladder/staircase from the cockpit. In miserable weather the flybridge is enclosed with clears. 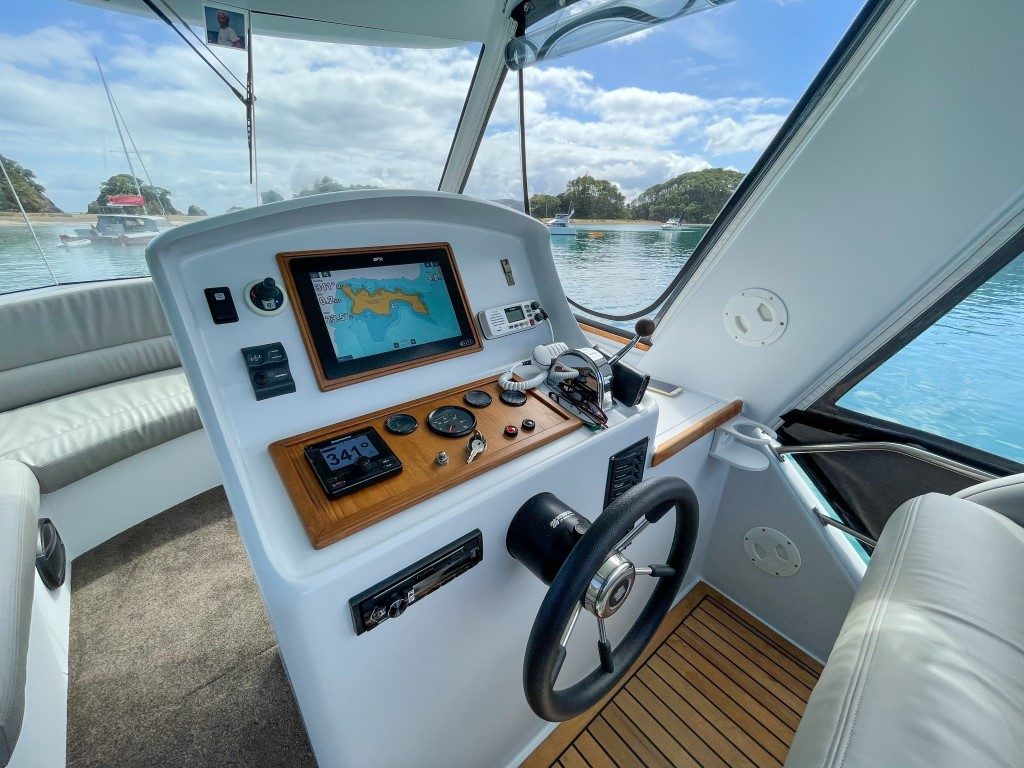 The sleeker profile is enhanced by new windows set forward into the sides of the cabin top – the forward master cabin/bathroom is now flooded with natural light – all complemented by more stylish stainless steel railings around the foredeck and boarding platform aft.

Interior
Bartlett began with a clean sheet of paper, entirely gutting the dated saloon and galley to make better use of the available space. Central to his thinking was eliminating the traditional saloon helm station. The boat is now controlled from the flybridge only – where the views are better.
The new saloon/galley is a far more spacious area with a sense of ‘warmth’ conveyed by rich, solid teak joinery and burgundy leather upholstery (nothing beats the smell of real leather!). The galley’s a really clever blend of modern technology and traditional teak (witness the fridges behind teak doors) and the floors are solid teak. 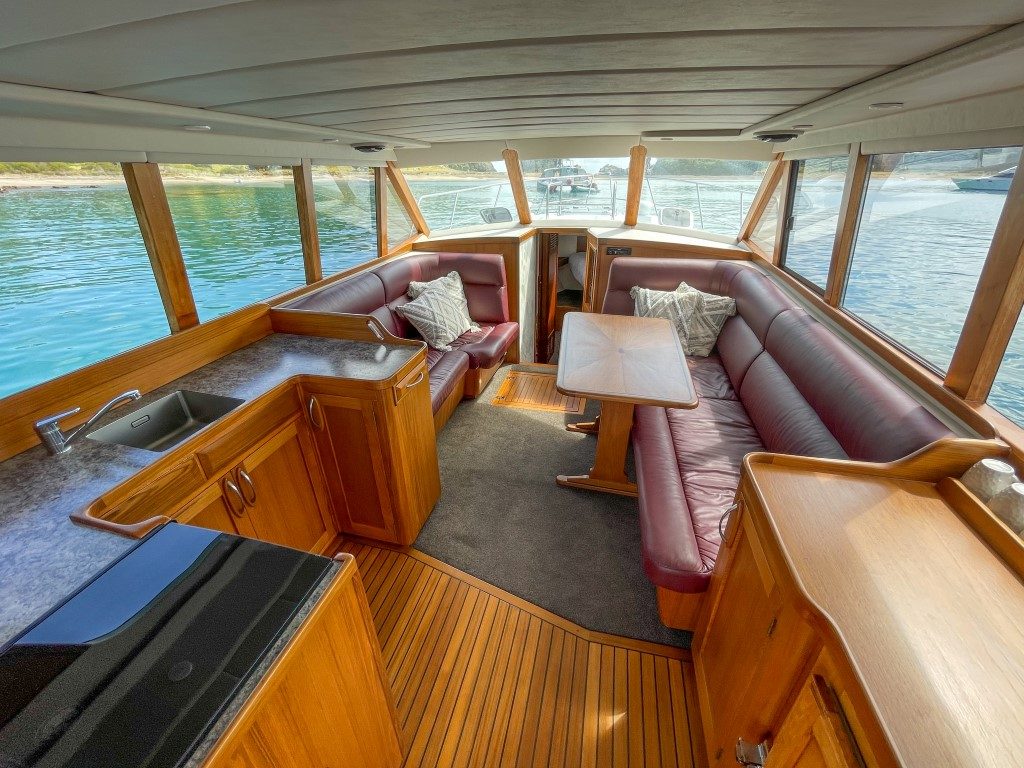 I particularly like the attractive, free-standing saloon table.
Built in solid teak, it features a creative use of the timber’s grain. Even better, its legs are mounted on extended ‘sliders’ that slip under the starboard settee. While this provides stability while under way, it also means the table’s position is variable – it’s easily shifted into the centre of the saloon to accommodate dinner guests seated on the port settee. 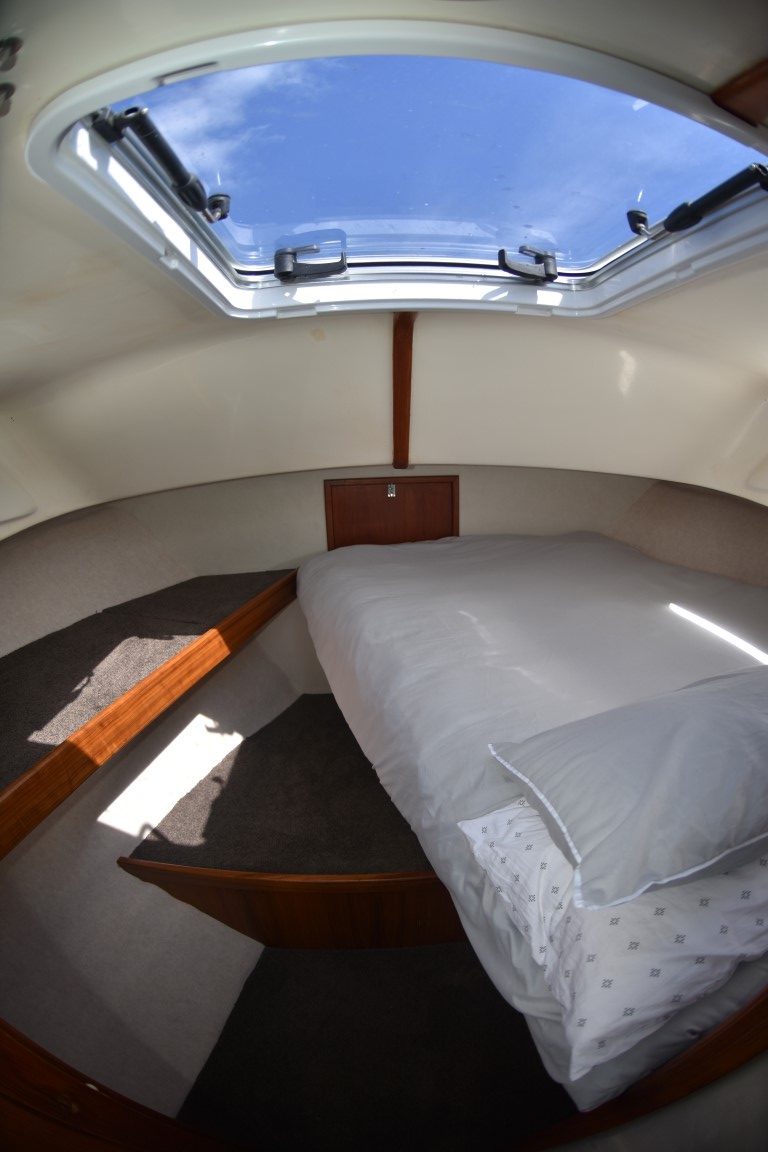 The forepeak too, has benefitted from the redesign – it now boasts a much larger double bed (offset to starboard), with a parcel shelf to port. The single bathroom (just aft of the forepeak, to port) has also enjoyed a rework and is much brighter thanks to the new windows in the cabin sides.

Engine room
One of the few components retained from Masquerade’s original inventory is her engine – the original 280hp 671 Detroit straight-six diesel. It was in pretty good nick and a nice reminder of the boat’s vintage.
But it did receive a major revamp with new mounts and a new drive-line, as well as shedding a number of mechanically-driven hydraulic pumps and refrigeration units (all fridges – there are four – are now electric, with the original cabinets retro-fitted with Isotherm units). A second alternator has been added (it runs from a pulley at the rear of the engine). The new sound-absorbing insulation works really well. 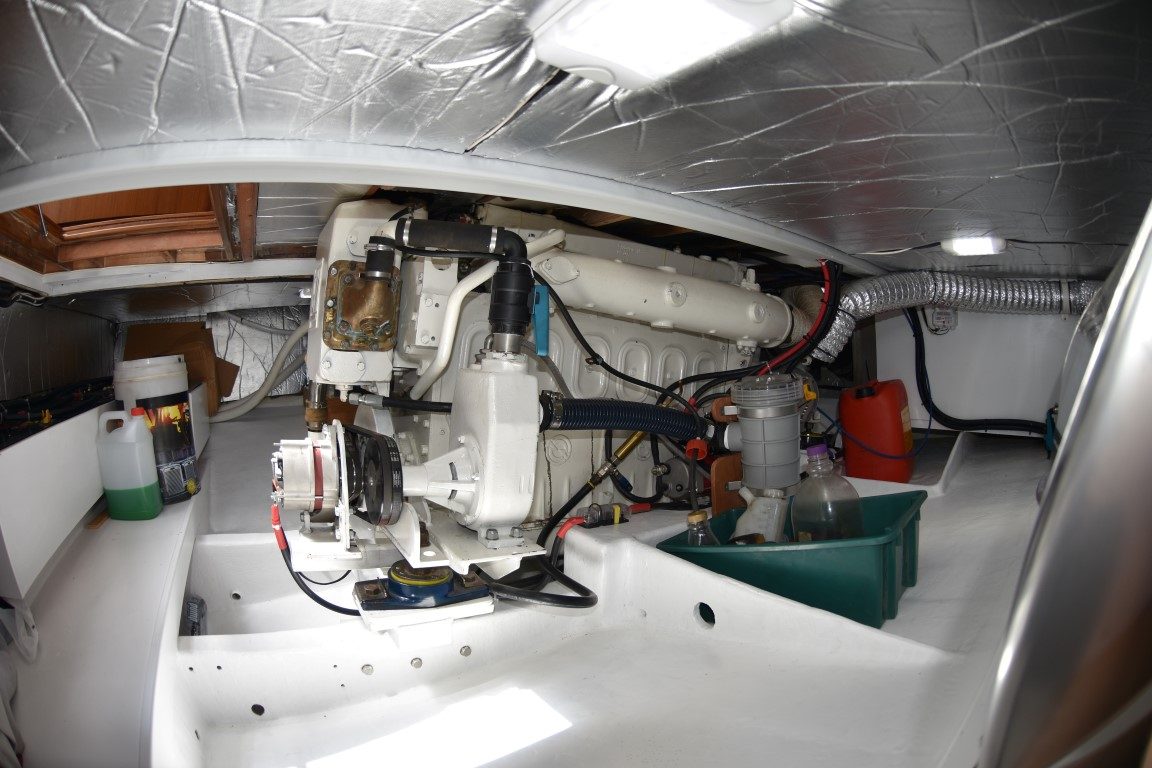 Stripping away the obsolete mechanical accessories created much more space in the engine room and, now painted a pristine white, it’s no longer a hellish dark hole where possums go to die. The boat’s original four fuel tanks have been reduced to two (she now carries 700 litres).
All this surgery has delivered a much lighter Masquerade – she now weighs 8.5 tonnes compared with her original 10 tonnes. And she’s quicker – now cruising at 8 knots (consuming eight litres/hour) – and if guests are running to a tight schedule she can be coaxed to 16 knots WOT. 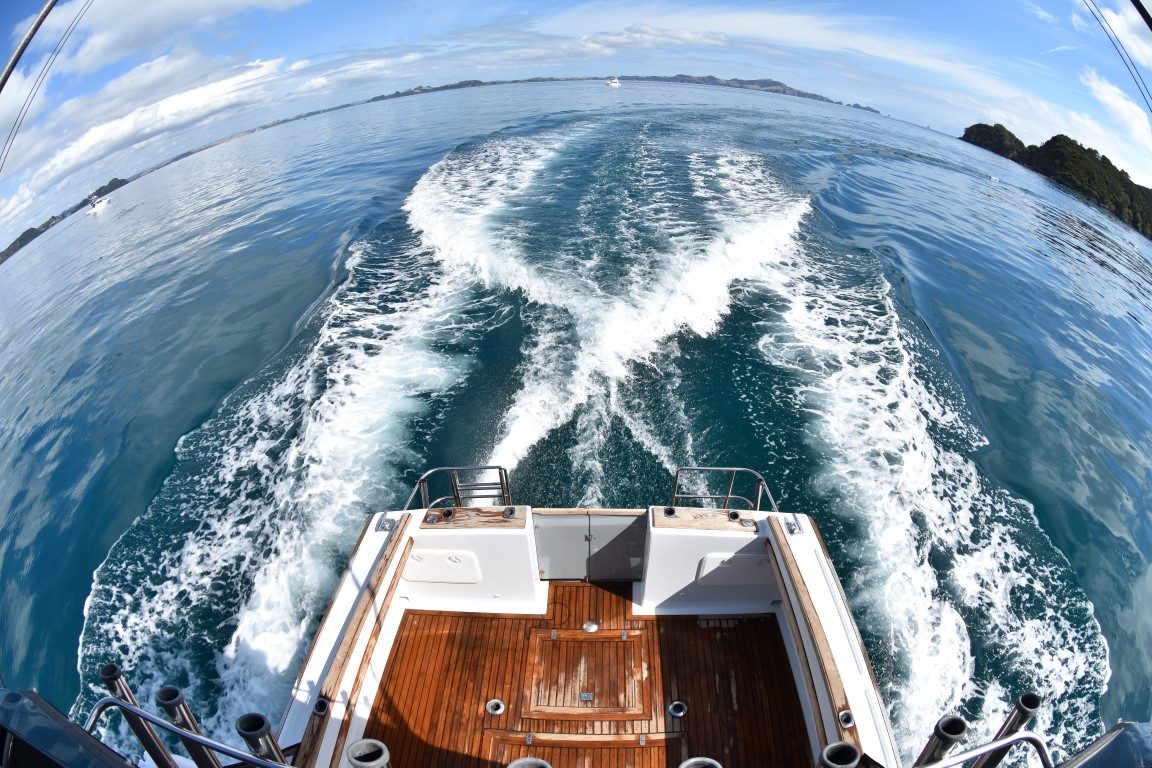 The old lady has also enjoyed a complete rewire and replumb and her electrical system is now powered by two lead crystal batteries (approximately 300 amp-hours). Two 70-watt solar panels on the roof are easily able to keep them (and the four electric fridges) in the happy zone. Other modern conveniences include a bow thruster and underwater LEDs at the stern – a helpful beacon identifying party central for any late-arriving guests who may have pre-loaded before dinner.
And what of the game fishing?
Masquerade now carries more modern outriggers and while the Harbrows have yet to land a marlin, the large door in the transom is there – ready, waiting and welcoming. Until then, they’re happy to savour the old dame’s charms, cruising the coastline with the family at a leisurely – but always elegant – pace. 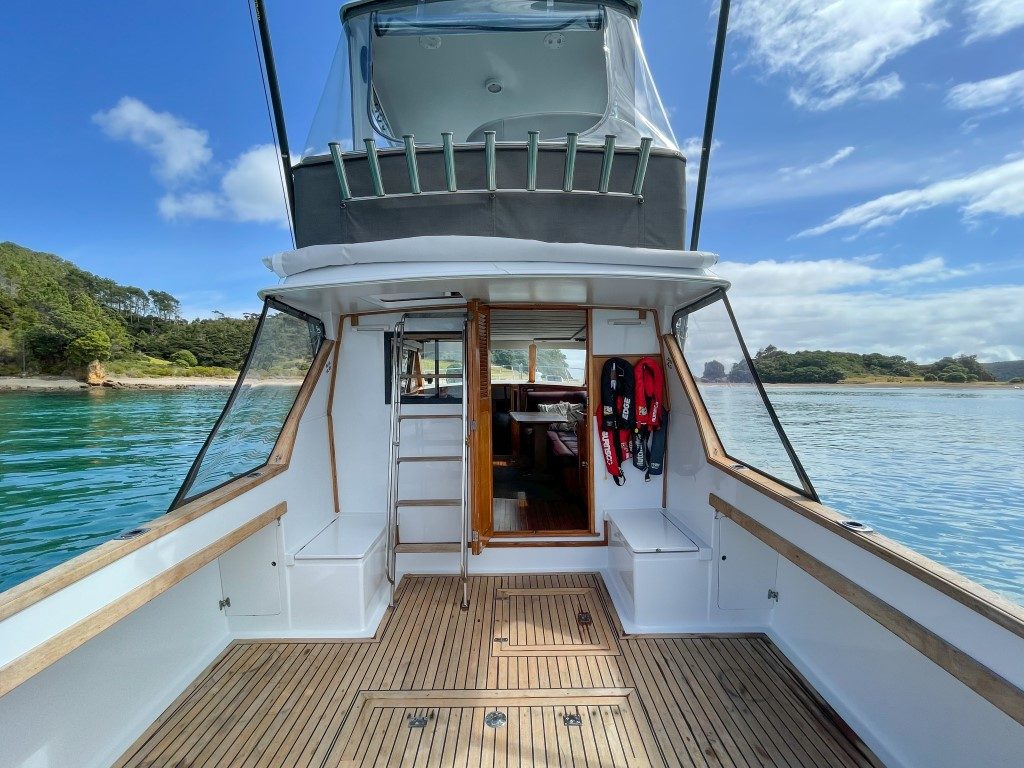