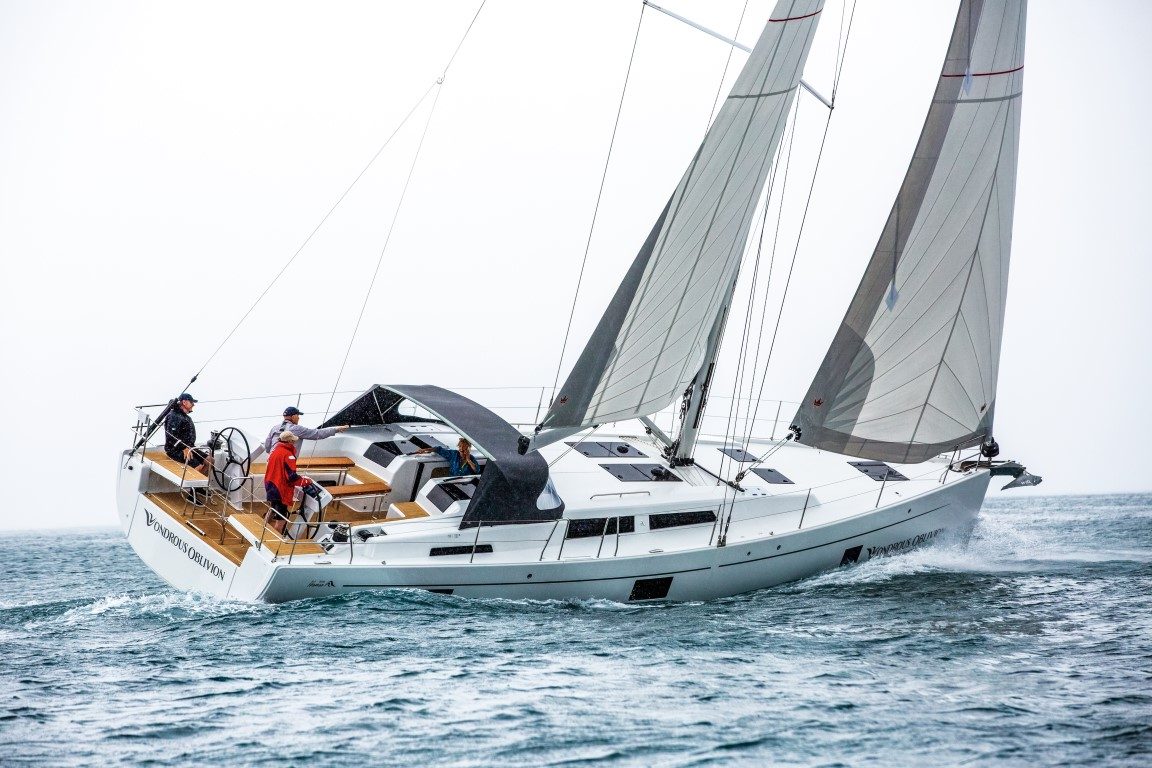 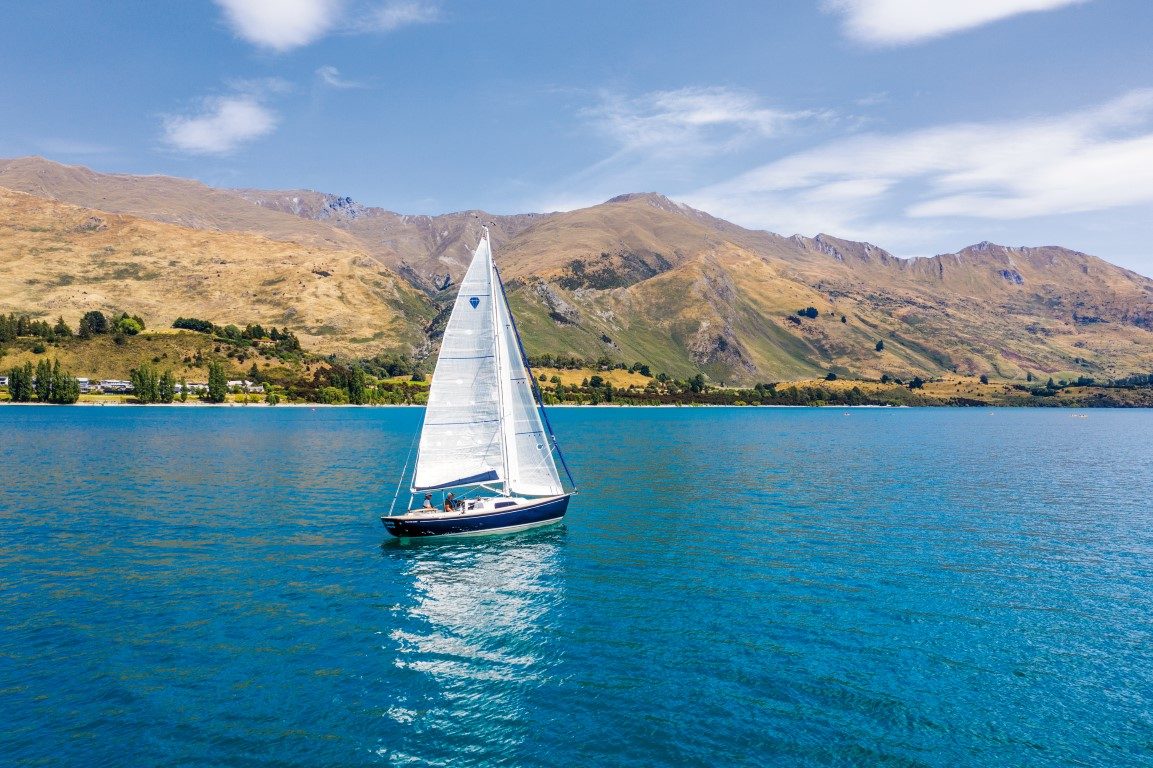 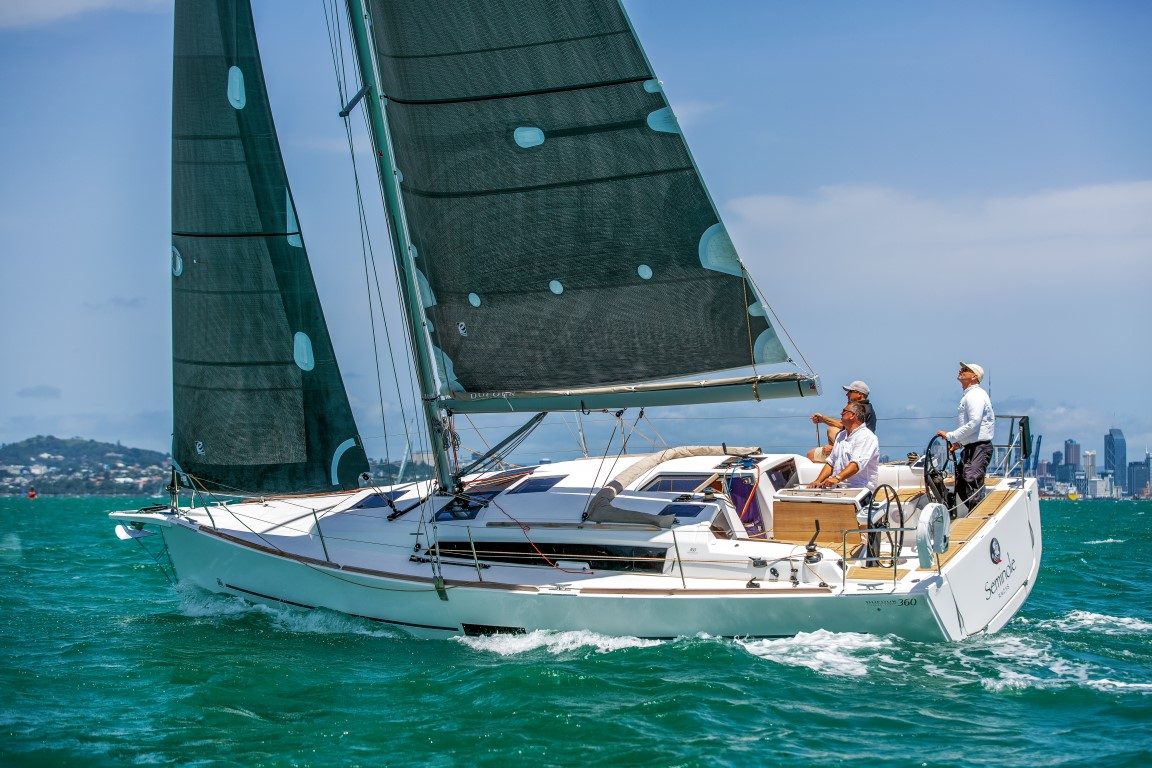 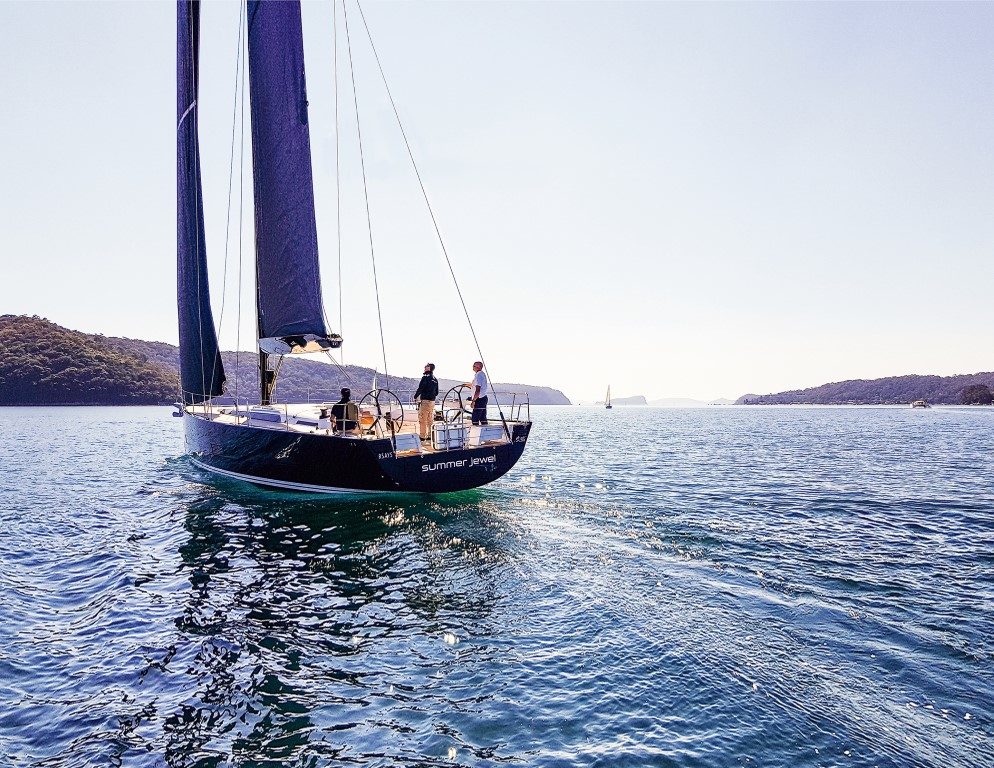 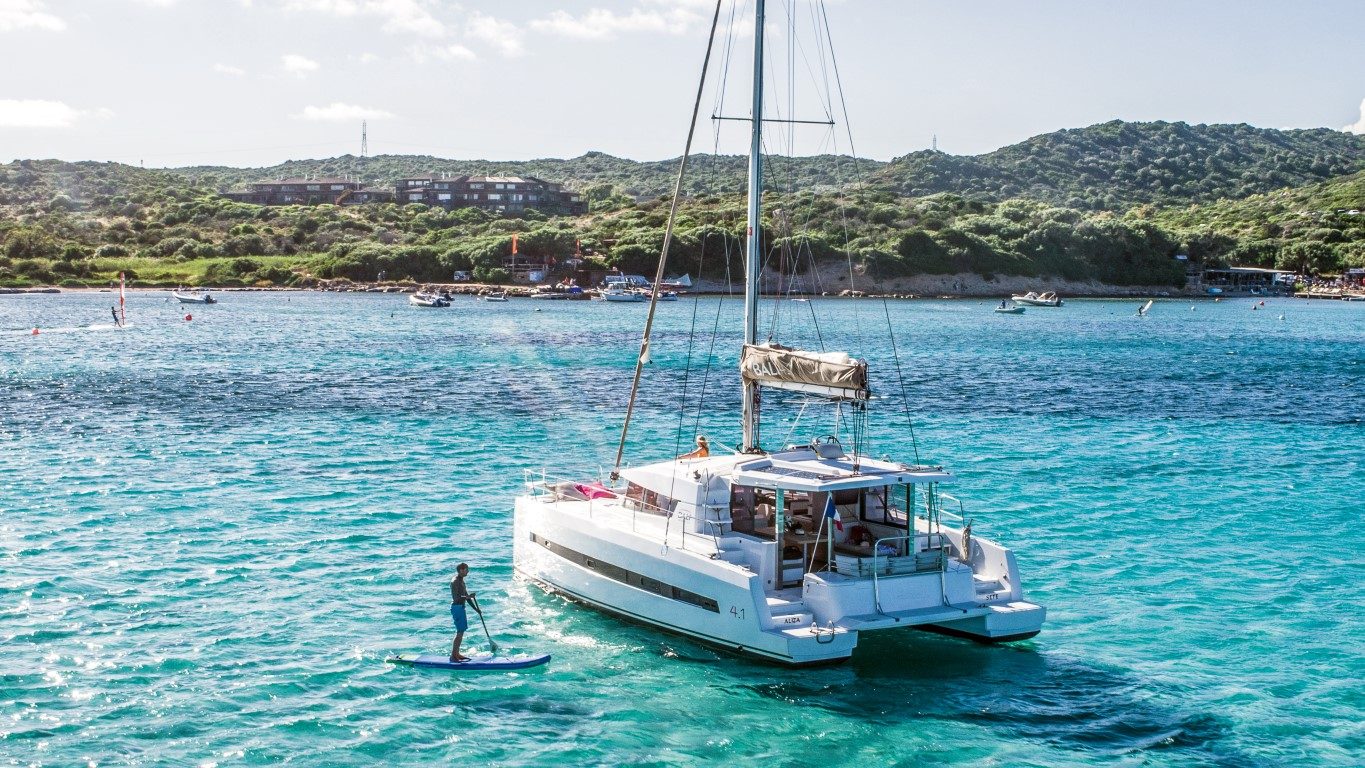 The Italian Solaris 47 is intended to meet both sides of the performance-cruiser equation – and reward the discerning sailor.

Standing out amid the acres of gleaming yachts at the Cannes Boat Show was no mean feat for the Solaris 47 – and testament to the striking lines drafted by Argentinian naval architect Javier Soto Acebal; with due credit to the 40-year tradition of the yard that’s only a Vespa scooter ride from the shores of Venice.

All this was duly noted by Australasian dealer Anthony Bishop who told me while we sat aboard the 47 how he was keen to promote this premium quality brand throughout our region after taking over the Windcraft dealership in 2016. 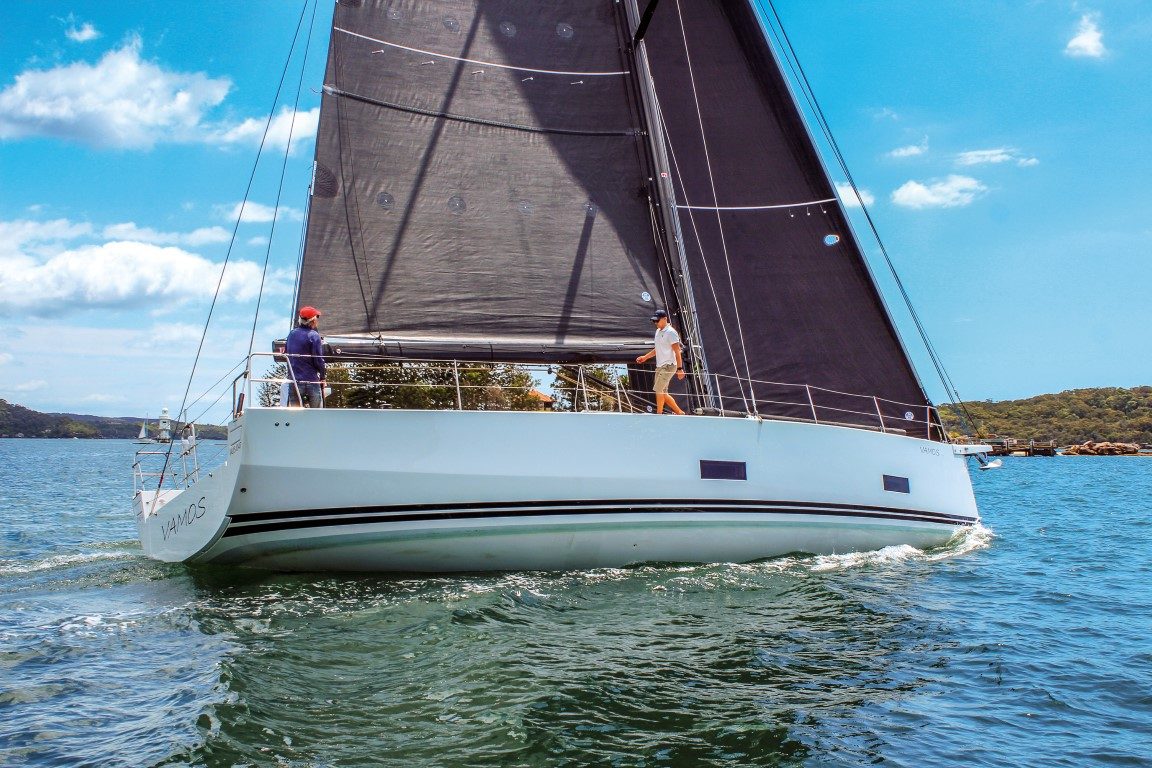 “So far we’ve only had a 42 but Australian and New Zealand owners who want that next level of yacht are seriously looking at the Solaris,” he said. The arrival in 2018 of the 47 and a 50 coming in 2019 confirms Windcraft’s intentions. The Italian yard produces about 40-50 of these hand-crafted yachts annually from a range that currently consists of nine production models from 37 to 72 feet.

At Cannes 2018 a new version of the Solaris 44 was launched and reflected again the attention-to-detail I’d experienced when sailing the 42 model. Quality is at the heart of the privately-owned yard’s philosophy and one reason why it has produced the iconic Wally supermaxis in the past, clearly demonstrating the standard at which this relatively small yard operates.

So, the 2016-designed Solaris 47 comes with plenty of pedigree, a fact that attracted new owner Tim who keeps it at the Cruising Yacht Club of Australia. A keen yachtsman who races smaller keelboats, he told me about his search for a yacht that was enjoyable to sail, rather than simply a cruiser.

“I thought that 47 foot was just about right for comfortable coastal sailing but the performance of the Solaris got me thinking about racing it,” he explained as we sailed along Sydney Harbour. The result is a highly-optioned version (hull number 14) with a full carbon rig from Hall Spars, range-topping North 3DI carbon sails and a deep lead-bulbed keel to give a high stability ratio.

Keeping costs reasonable means the hull is polyester sandwich (but carbon versions on larger models are available). Volume and beam are generous, which creates a spacious hull with a discreet chine running aft from midships and fine plumb bow ideal for going to windward.

Unusually in this size of hull, there’s a large dinghy garage as well. Plenty of volume allows for a semi-flush deck profile which is particularly suited to regatta sailing but in cruise mode the discreet spray dodger can be elevated. On deck the artificial teak cladding and hidden halyards, along with flush hatches, give that Swan-like flavour while the wide and open cockpit is functional with twin binnacles. 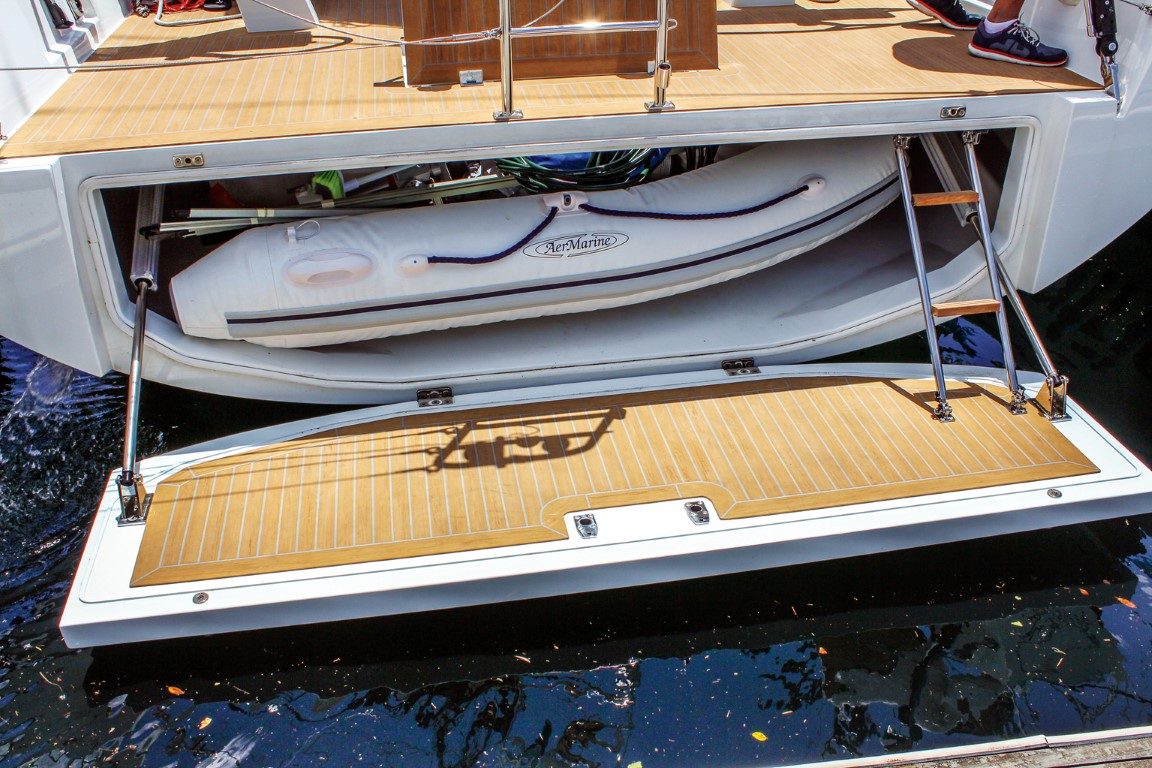 Forward of them, and divided by a passageway large enough for dedicated trimmers to work, are two sets of electric Harken Performa 60.1 winches. One set controls the German mainsheet which is secured on a single block; and jammers are ideally placed allowing all lines to feed into these winches.

More quality finishes included sturdy composite binnacles, solidly bolted and glassed into the hull, while the carbon Jefa steering wheels add to the stylish feel of the Solaris 47. The binnacles house B&G screens on each (with repeaters on the main hatch), compasses and the obligatory autopilot.

Power controls for the upgraded Volvo 75hp are conveniently placed on the starboard binnacle with other controls at ankle height. Another wise option is the drop-down Maxpower bow thruster, allowing easier berthing. Locker space is good in the cockpit with bench storage on both sides, including a dedicated liferaft space, and aft hatch for quick access to the dinghy garage. 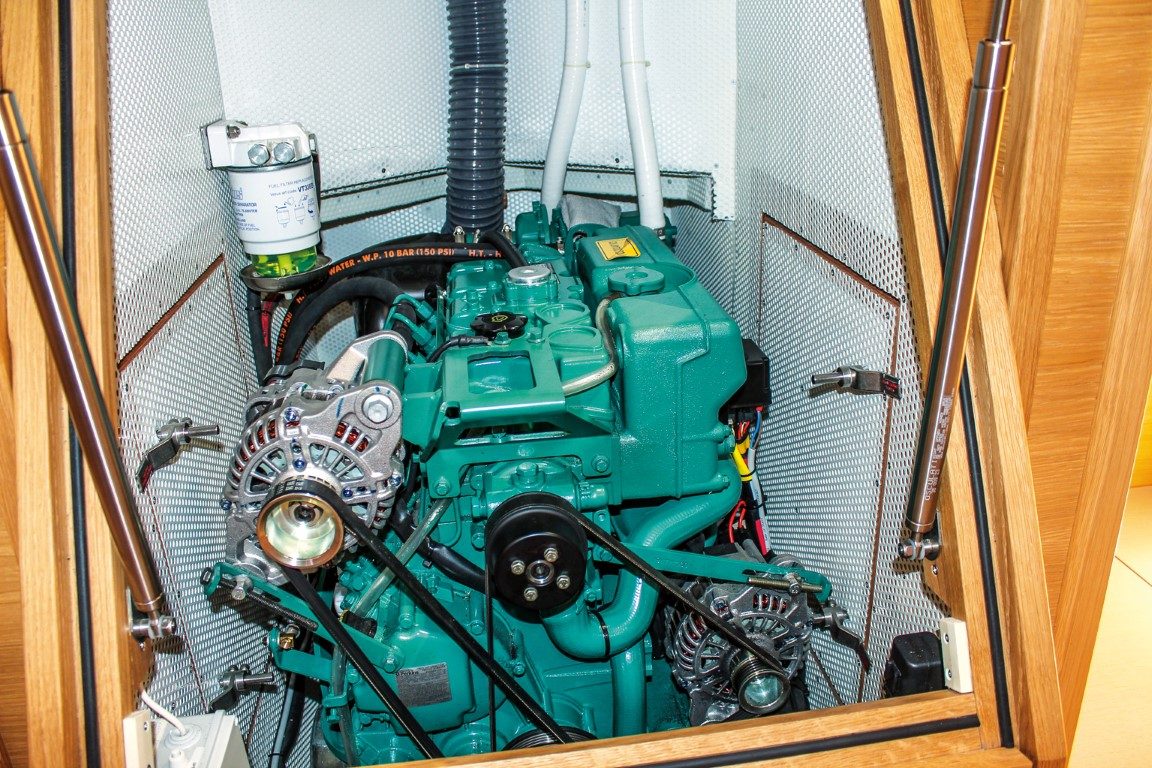 The open transom leads to the hydraulic teak-clad swim platform which drops to nearly sea level, allowing the inflatable dinghy to be easily launched with its electric Torqeedo engine. Not to my liking is the fashionable saloon-style doors on the main hatch, instead of traditional washboards or elevating ones.

Powerful sailplan
Interestingly, the latest generation of man-made teak (with natural also offered) felt and acted like the real variety in being less heat absorbent than earlier products while gripping my deck shoes effectively. And unlike natural wood, it shouldn’t require expensive replacement in years to come.

So this was an effective surface for walking along on the wide decks, with outboard shrouds giving a clear way to the foredeck. Good points to note include handrails on the coachroof, folding cleats all round, including midships and an integrated fibreglass toerail that helps on the foredeck when heeled, although not so comfy for hiking. 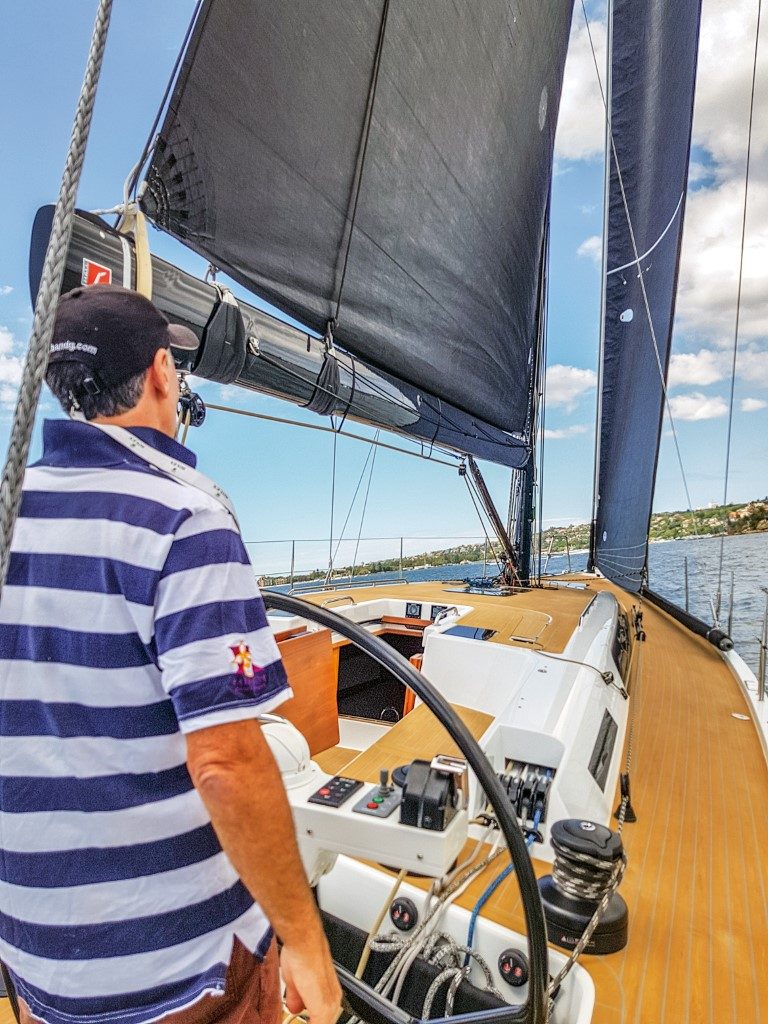 The bow is streamlined nicely, thanks to the systems – windlass and roller furler – hidden below hatches. A comprehensive anchor setup includes a vertical 1500W Lofrans windlass, deep chain locker and the anchor is neatly integrated into the optional fibreglass bowsprit. The bowsprit is strong enough to fly a Code 0 headsail without requiring a bobstay and there’s plenty of separation from the forestay. Also here is a large sail locker which on the review boat housed an asymmetric and jib.

Looking at the rig, the Harken roller drum unfurls the 106% North 3DI genoa on the carbon mast. The 3Di moulded carbon sails can hold their shape in higher winds and so bring extra loads, which is a major reason for using oversized deck fittings. 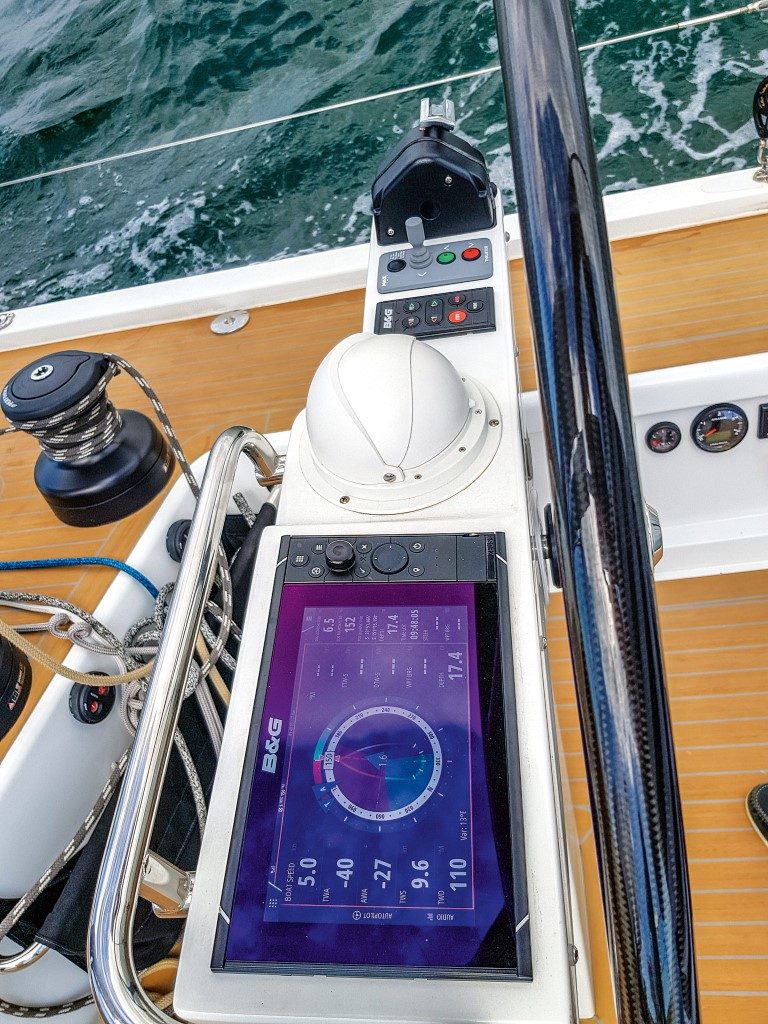 Elsewhere on the Solaris plenty of versatility is in-built, thanks to a self-tacking track for the jib, ideal for those short-handed voyages, while a solid vang controls the boom and all lines run in gutters to Spinlock jammers. The twin PBO backstays have hydraulic adjustment and the PBO shrouds use composite chainplates that connect to the integrated structural hull grid – an impressively strong and light arrangement.

Three double cabins
Down below, the three-cabin layout has the ensuite owner’s forward with two doubles aft and there’s a second bathroom here as well. A choice of finishes includes matching-grain light or dark oak throughout the saloon, with the former variety adding a bright ambience on the review boat. Superb finish and the close mating of joints really shone on this fit-out with high quality metal cupboard and door fittings throughout.

The U-shaped couch is forward and the lounge is opposite to starboard. The dinette table is solid wood with two chairs midships (pinned to the cabin sole) while the chart table is ideally placed near the companionway, allowing the navigator seated on a stool to easily view the cockpit and the starboard side via a rectangular portlight.

There’s bulkhead space here for electronics and the main electrical panel is in an overhead locker. Opposite, the L-shaped galley is well-equipped with a three-burner stove/oven, chest and front-opening fridges ande dual sinks to finish off this excellent area. Options include a generator to run a microwave and air conditioning.

The composite work surfaces and tall fiddles should allow easy food preparation and there’s an opening hatch above the stove. Hatch space throughout is good with rectangular hull portlights, coachroof windows and two opening skylights. 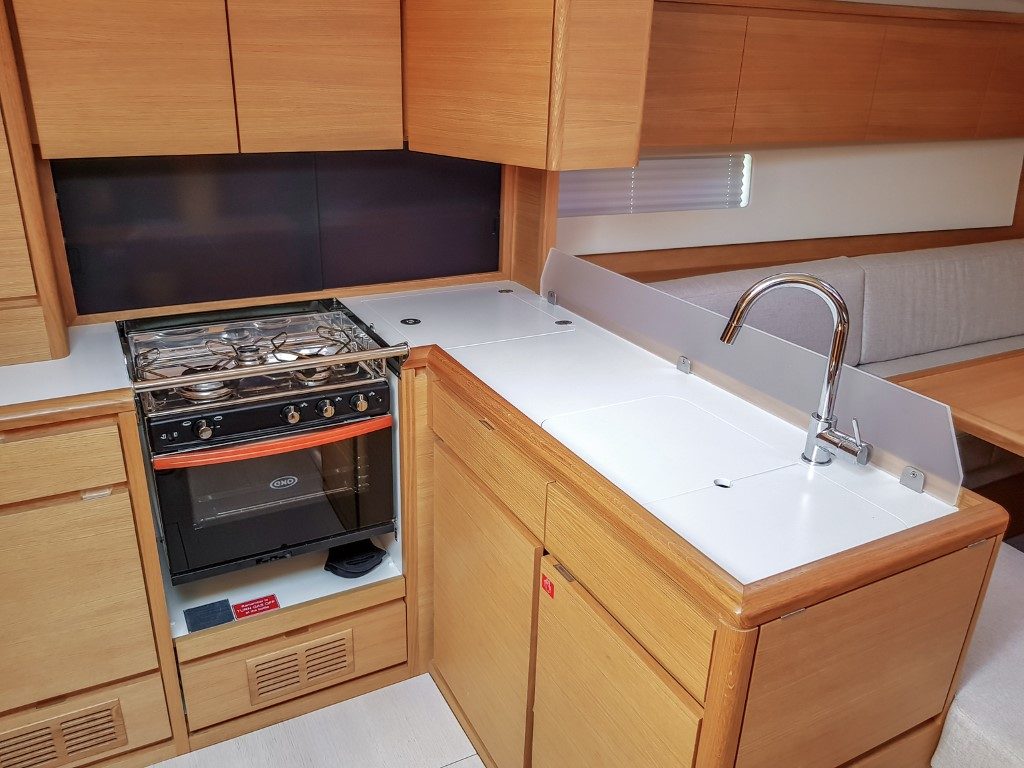 The owner’s ensuite uses the tall topsides and plumb bow to create an airy cabin with island bed (with storage beneath, even with the thruster fitted) and it’s surrounded by overhead lockers and tall wardrobes. The ensuite came with an upgraded electric head and a perspex door separating the shower, with a quality teak grating underfoot.

Looking aft, the two double cabins offer conventional berths but one can be divided into singles. Natural light is limited through the two small hatches. Unlocking and lifting the hinged companionway steps on their gas struts reveals the 75hp Volvo sail-drive which has sufficient space around it for servicing, especially when the side access doors from each cabin are removed; and the main batteries are nearby as well. Our review boat had a feathering propeller, which is an ideal option to reduce drag on a performance cruiser. 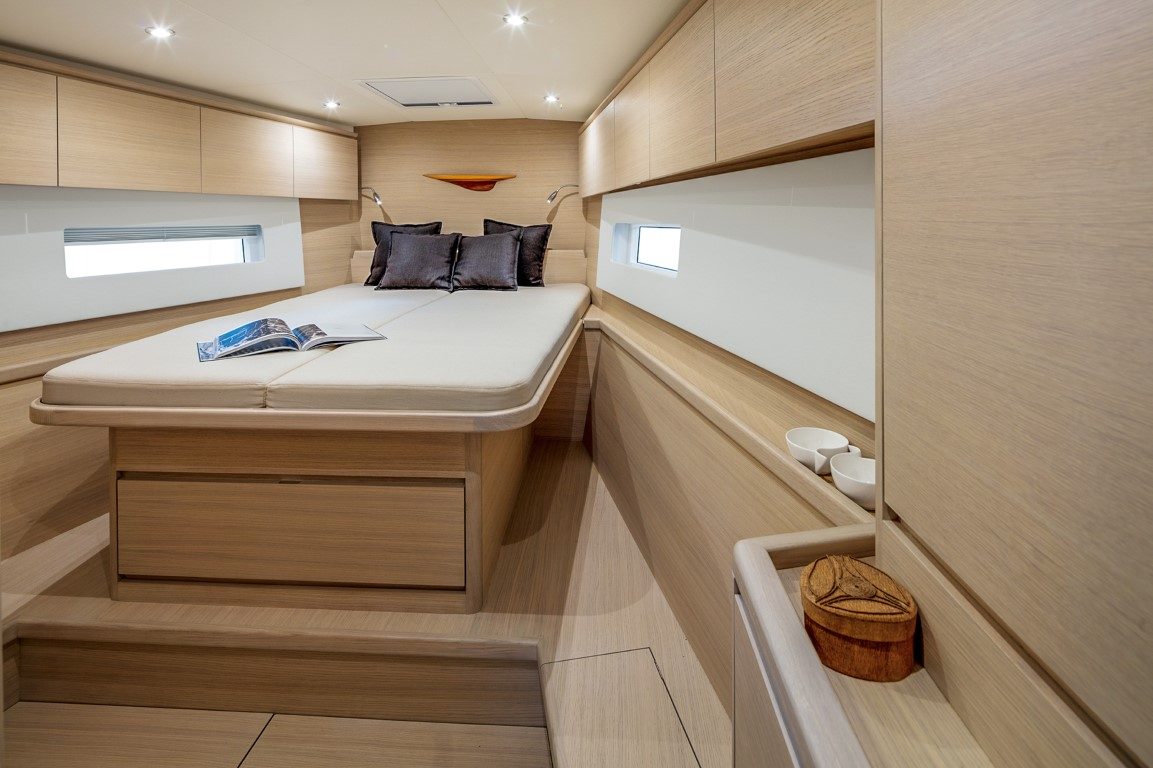 Hand-laid hull
Unlike the mass production market, Solaris use a traditional build of hand-laying the hulls, offering a more customised approach; something that may change as the popularity of these premium market yachts increase. But it does allow the company to build a variety of vessels beyond its standard range.

Structurally these are stiff boats thanks to the main bulkheads being bonded to the hull and deck and constructed from composite foam sandwich. The hull and deck are of vacuumed (PVC Airex Core) in polyester and the keel-stepped mast sits on an integrated fibreglass grid connected to the longitudinals. 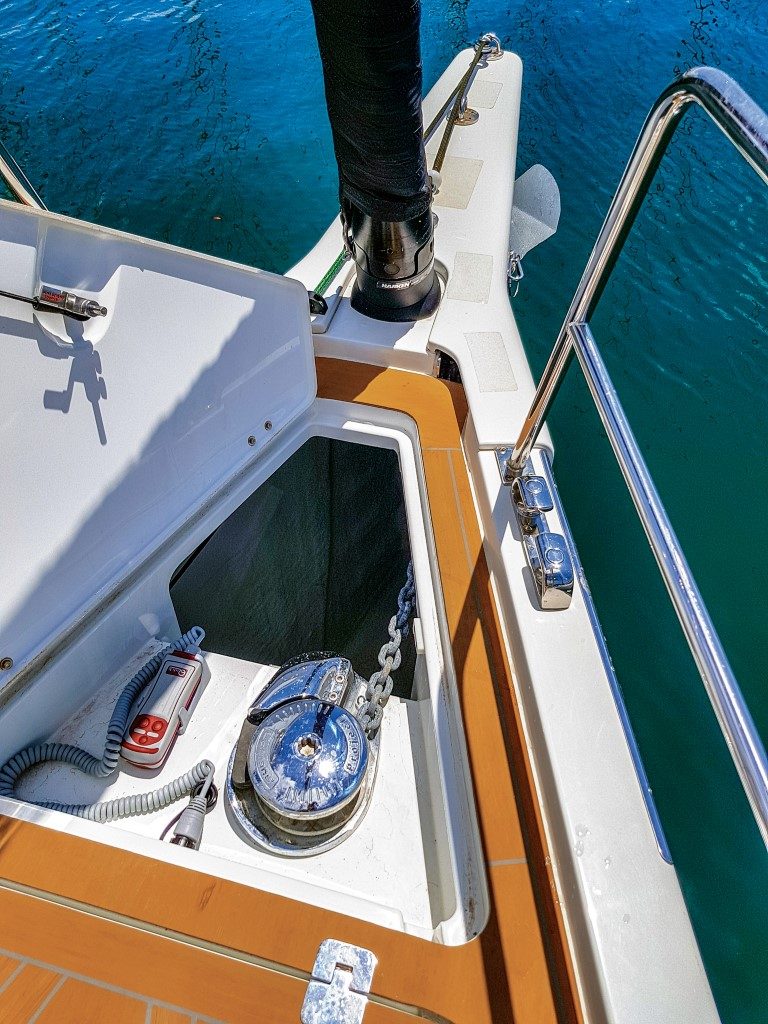 Lifting the floorboards, I found the keel bolts to be oversize and a flange spreads the keel’s load through the hull. Stiffness is further enhanced by the deep lead bulb, which supports the sizeable racing sail wardrobe on our review boat. Steering gear is quality Jefa linkages attached to a balanced GRP, foam cored spade rudder which proved extremely powerful at sea.

Sailing Sydney Harbour
A light breeze tested the slipperiness of the Solaris 47 as my hosts for the day, owner Tim and Windcraft’s Ric Hawkins, worked the cockpit. Earlier, the deck crew had quickly hoisted the mainsail using the two-speed electric winches and the genoa easily unfurled once I’d flipped the jammer near the helm then reeled it out on the second electric Harken.

“It’s very manageable, as my friend and I found when sailing it in a near gale,” commented Tim who has been well satisfied with the boat during his five months of ownership. Its maiden regatta was Hamilton Island which saw the vessel secure podium finishes.

Sitting out on the coaming with only a light finger-touch required on the large composite wheel, the position felt very comfortable as I watched the tell-tales go horizontal on the genoa. The B&G screen showed our speed to be 7.1 knots in only 9.8 knots of breeze while the apparent wind angle was a sharp 25o. 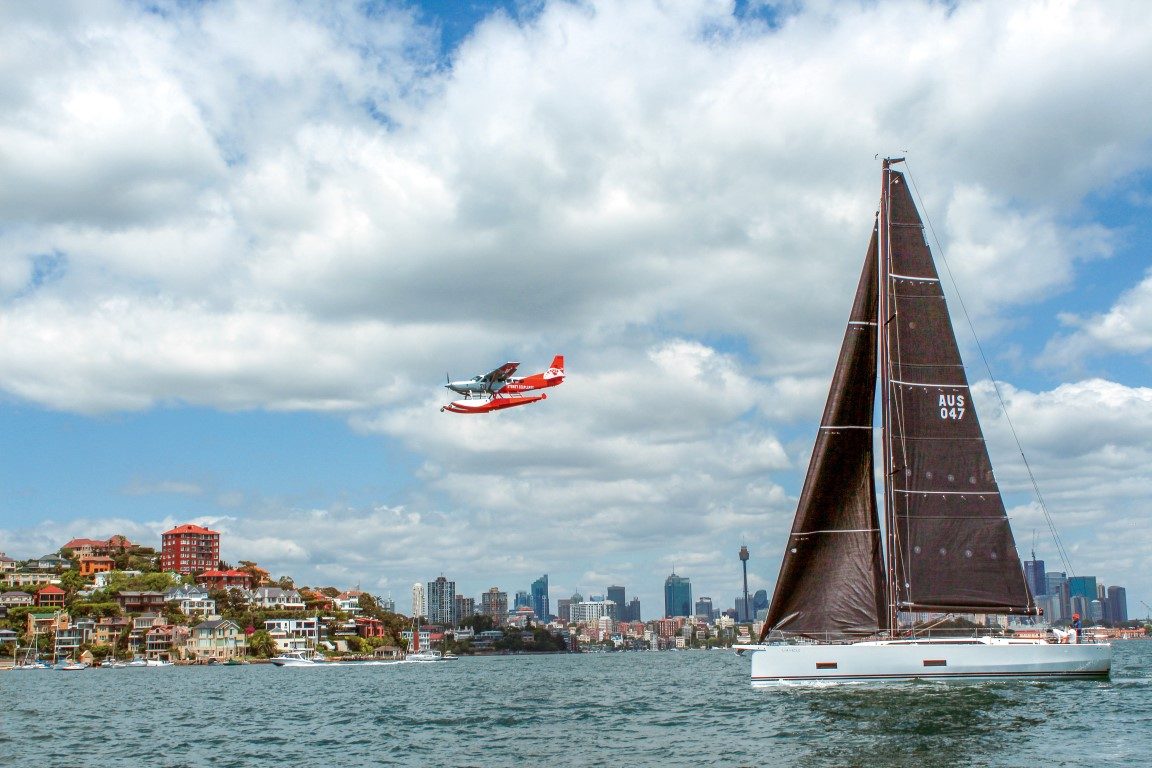 “Our success at Hammo came from our pointing ability,” commented Ric, who has been helping the owner familiarise himself with the boat. Tacking was brisk without much loss of momentum and the sheets ran cleanly as the genoa rolled past the mast with the tracks perfectly placed to flatten out the carbon sailcloth. Handily, I could trim the headsail from the helm, while the crew also had enough working room to do this.

As a few gusts came down, all that was lacking were footplates to prevent my feet from sliding, so I jammed them against the binnacle base instead. Turning off the breeze I expected the beamy hull to pay the price for its proportions.
But I was pleasantly surprised as the numbers showed 5.7 knots at about 70o which caused me to wish we’d a Code 0 to unfurl from the bowsprit to see if the flatter aft sections of the hull would come into play – as the Solaris 47 is clearly a yacht that rewards both the discerning performance sailor and the cruising sailor./>