“I WILL NOT HAVE THAT MAN IN MY HOUSE”, said my mother, with quite out-of-character emphasis. She was talking about George Dibbern, the exotic foreigner in New Zealand’s yachting scene from the 1930s. My father had wanted to bring him home from the Masonic Hotel in Devonport for dinner. Was her outburst justified or was it is a total disconnect of cultures and mores?

With his ketch Te Rapunga, eccentric German-born George Dibbern had fitted right into New Zealand’s exciting Depression-era shoestring Pacific cruising adventures spearheaded by Johnny Wray with Ngataki and Dick Wellington with Seaward, but with his own raffish twist.

George was born in Kiel in northern Germany in 1889, in comfortable circumstances, the only son of a sea captain. In 1907 he was accepted as an apprentice aboard the threemasted barque Pamelia, owned by the Flying P Line of Hamburg which ran many famous windjammers, including the near sister-ships Pamir, Passat, Pommern and Preussen. Pamelia was in the trade of bringing nitrate for fertiliser (and explosives) back from Chile around the Horn. After two trips around the Horn and back, George signed on the barque Antuco bound for Taltal, Chile, via Sydney, for nitrates. He jumped ship in Sydney. 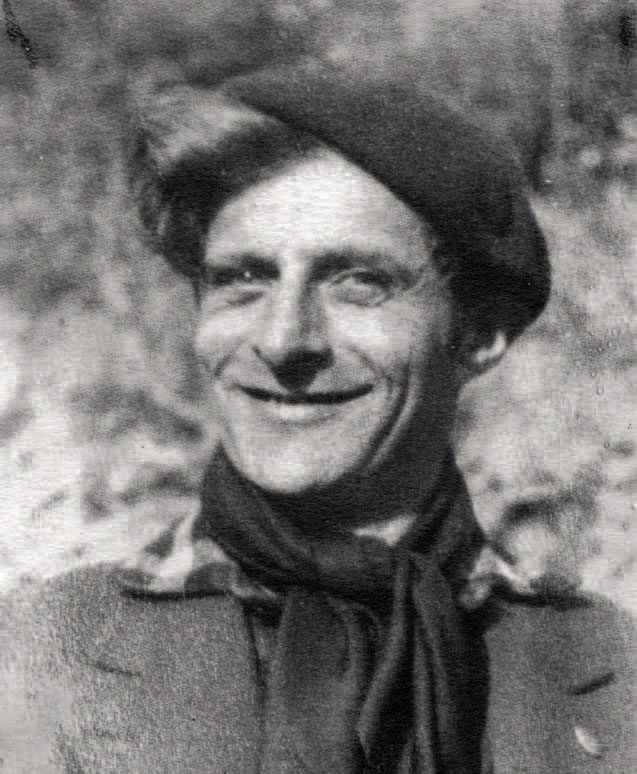 Over the next five years George had a wide variety of jobs and business ventures, trips to Tasmania and New Zealand where he set up in business in Dannevirke as a mechanic and taxi proprietor, running a V8 Cadillac. He made deep friends in the local Maori community. In particular he was overwhelmed with love and respect for Rangirangi Paewai (Mrs Peeti); she took him under her wing and instilled in him a growing understanding of te reo and Maoritanga. She became “Mother Rangi” to him.

In early 1914, while waiting for parts for his Cadillac to arrive, he bought a return ticket by steamer to Avarua, Rarotonga, where, with his growing knowledge of te reo, he became totally enraptured and absorbed himself into island life. When World War broke out in August 1914 he was planning to return to Avarua permanently, but his German citizenship forced him to stay in New Zealand throughout hostilities. George continued with his taxi business in Dannevirke and successfully diversified into beekeeping. 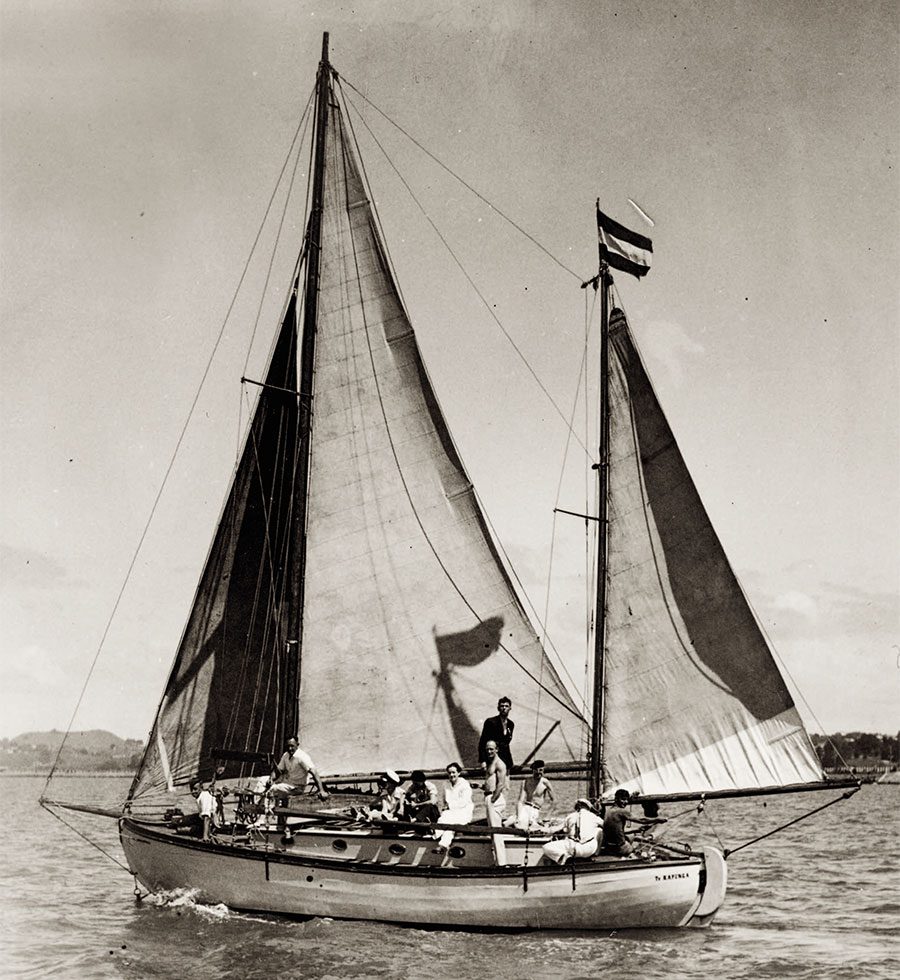 Te Rapunga on an Akarana YC picnic race to Waiheke.

In September 1917, however, he was forced to register as an enemy alien as anti-German feeling was triggered by the horrific casualties among our soldiers at Passchendaele, and the loss of the Huddart Parker trans-Tasman steamer Wimmera which struck a mine laid by the raider Wolf north of Cape Maria van Diemen. In June 1918, despite his popularity with many of the locals, especially his Maori friends, he was interned at Somes Island (Matiu) in the middle of Wellington Harbour. A year later he was summarily deported back to Germany, a country in despair.

For George Dibbern the next 10 years were in hideous contrast to his years of freedom in the South Pacific. While he married and had four children, three daughters surviving, he and his family suffered from the economic and political chaos in Germany. Family money ran out in the hyper-inflation. Then, in mid-1926, the Kiel boatbuilding firm Tetsche Möller in which he had invested with Gunther Niemeyer, a boyhood friend, failed. He was left with nothing but an incomplete 32ft Colin Archer-inspired double-ended yacht hull which Niemeyer had designed in 1923 but which lay unsold. George named her Te Rapunga, after one of the stages in the Maori cosmos, and fitted her out to hire for cruises in the Baltic, the canals of Germany and France and the Mediterranean. It did not end well. Te Rapunga froze up in the canal at Strasbourg. 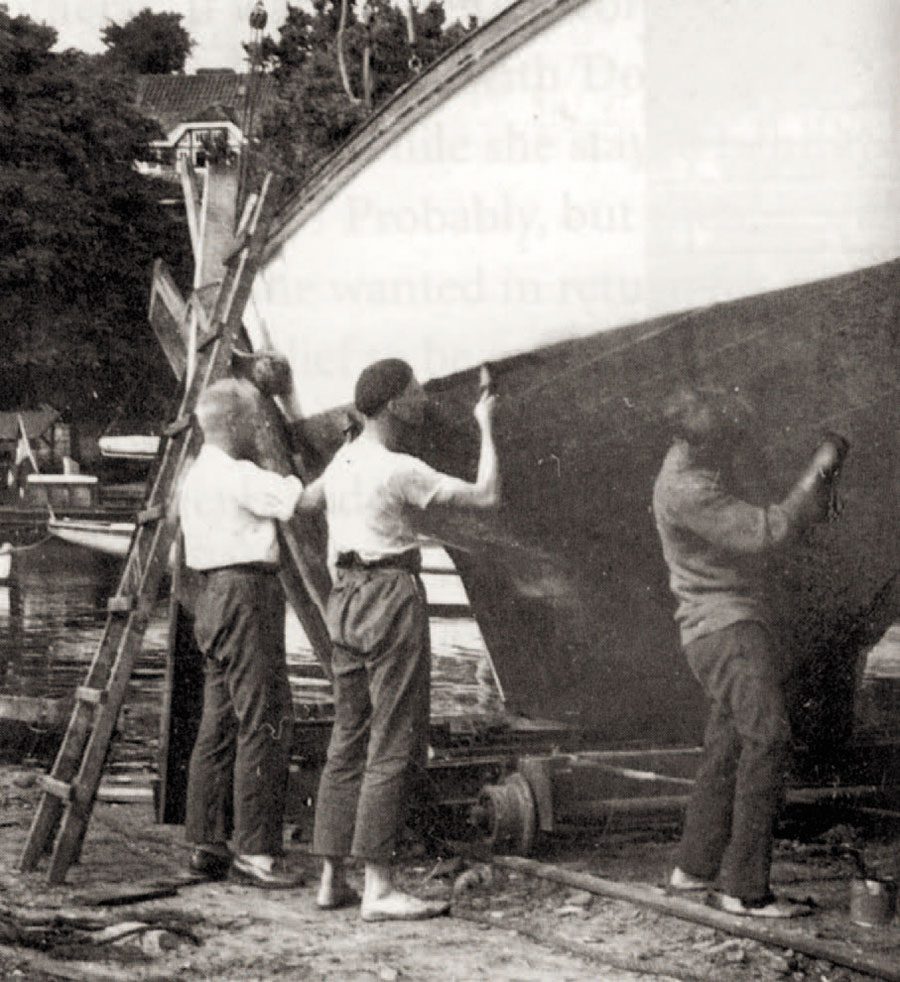 By December 1929 George, a liberal with a strong sense of the freedom of the Antipodes, felt alien in Germany, especially after the success of Adolf Hitler’s book Mein Kampf and the rising Nazi party. He also felt a failure as a husband and a father. He yearned to return ‘home’ to New Zealand and Mother Rangi who had offered land to him and his family. After reading Alain Gerbault’s In Search of the Sun, telling of Gerbault’s circumnavigation in his cutter Firecrest, he became totally unsettled. His wife Elisabeth supported him in trying to find himself and helped him carry out his long planned voyage in Te Rapunga.

His crew were his nephew, Gunter Schramm, and two people with money, newspaperman Baron Albrecht von Fritsch and his divorced sister Baroness Dorothee von Fritsch (‘Doe’), the latter equipped with a large crocodile-skin purse, the Krokodil. Krokodil was to have a lot of use, producing much needed cash to buy essential gear and useful tools. George set about refitting his yacht at Kiel for as little money as he could and training the von Fritschs to be useful crewmembers. On Saturday, August 17, 1930, Te Rapunga set sail from Kiel on a four-year voyage to Auckland. 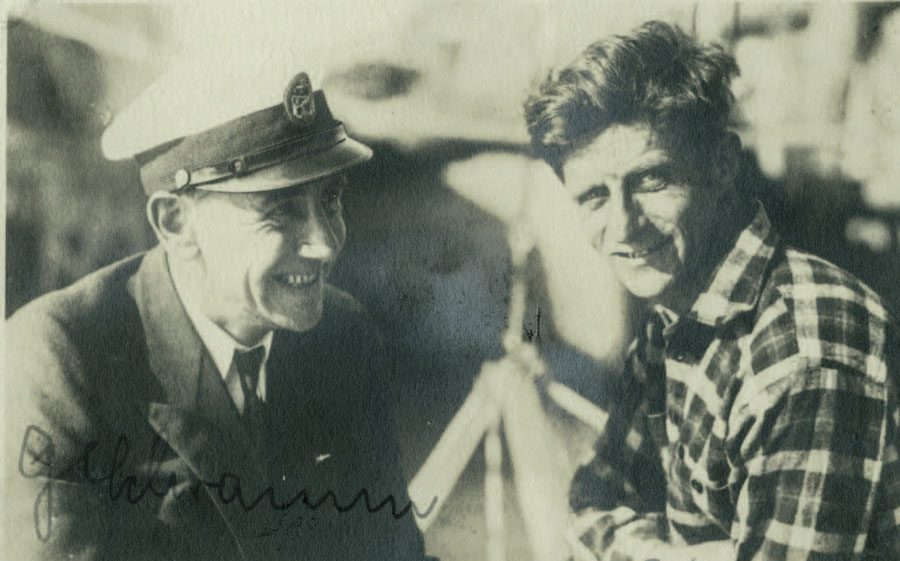 At first they got their sea legs by cruising in the islands of Friesland and the south coast of England, the crew learning all the time and improving the gear; now the Baron left for Paris. There was a spell in the Scillies, Porto, Lisbon, Cadiz, then Mallorca where George tired of the baroness and asked her to leave. Without her cash, he and Gunter were stuck, but soon found paying Austrians to be sailed about the Mediterranean. All this time George was coming to terms with leaving his wife and family and “searching for life’s meaning”… and having an entertaining time doing it.

Doe, mit Krokodil, and Schnuffi, a dwarf poodle she had bought for Gunter, rejoined them for the trip across the Atlantic from Gibraltar via Las Palmas. The crossing was in benign weather and took just 28 days from the Canaries to Kingston, Jamaica, then on to the Panama Canal. At Balboa, on the Pacific side of the canal, they left Doe behind on a wharf, to her surprise, and sailed up the coast. Ostensibly they wanted to visit the 1932 Summer Olympic Games in Los Angeles, although neither George nor Gunter had any interest in the games. Delayed by calms, George decided to bypass to San Francisco. 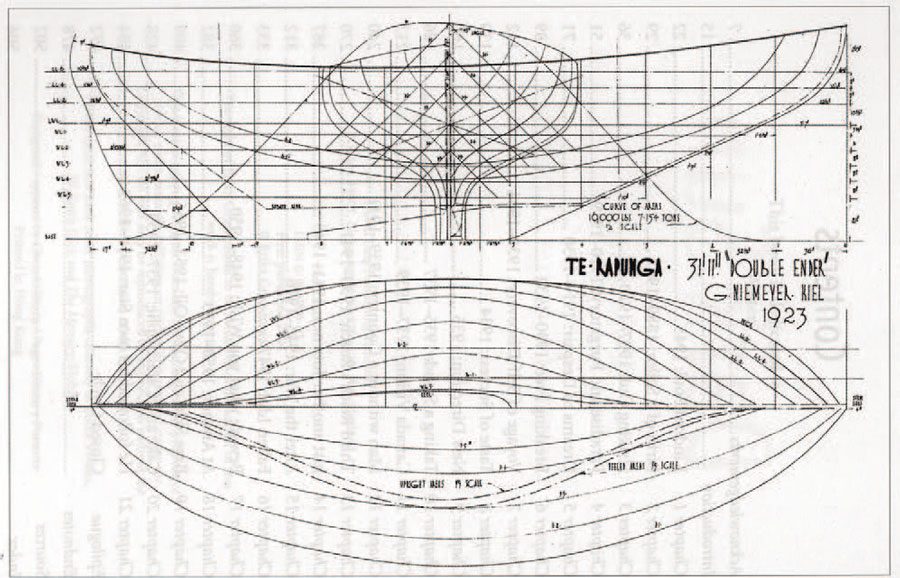 The reconstructed lines of Te Rapunga (from Dark Sun).

The trip was marred by intense heat and a shortage of food. They took 101 days to reach San Francisco. A short time later Doe caught up with George in Sausalito where Gunter was overhauling Te Rapunga and she was being fitted with new spars and a Bermudan ketch rig with a new suit of sails, courtesy of the many local Dibbern fans for whom he was providing highly entertaining lectures for fees. Doe bought a car in which they toured to the Grand Canyon and hung out in Los Angeles.

However the Doe-funded idyll in California came to an end when George and Gunter set out with new friend Walter Olsohn in Te Rapunga in August 1933 for Honolulu under the German Weimar Republic’s black, red and gold ensign, not the nowofficial Nazi swastika. The crossing was a pleasant sail; George and Gunter were delighted to be back at sea but they arrived with just five dollars. There was no need to worry because they were immediately swept away in a tsunami of hospitality. George became much in demand as an engaging and fluent speaker. 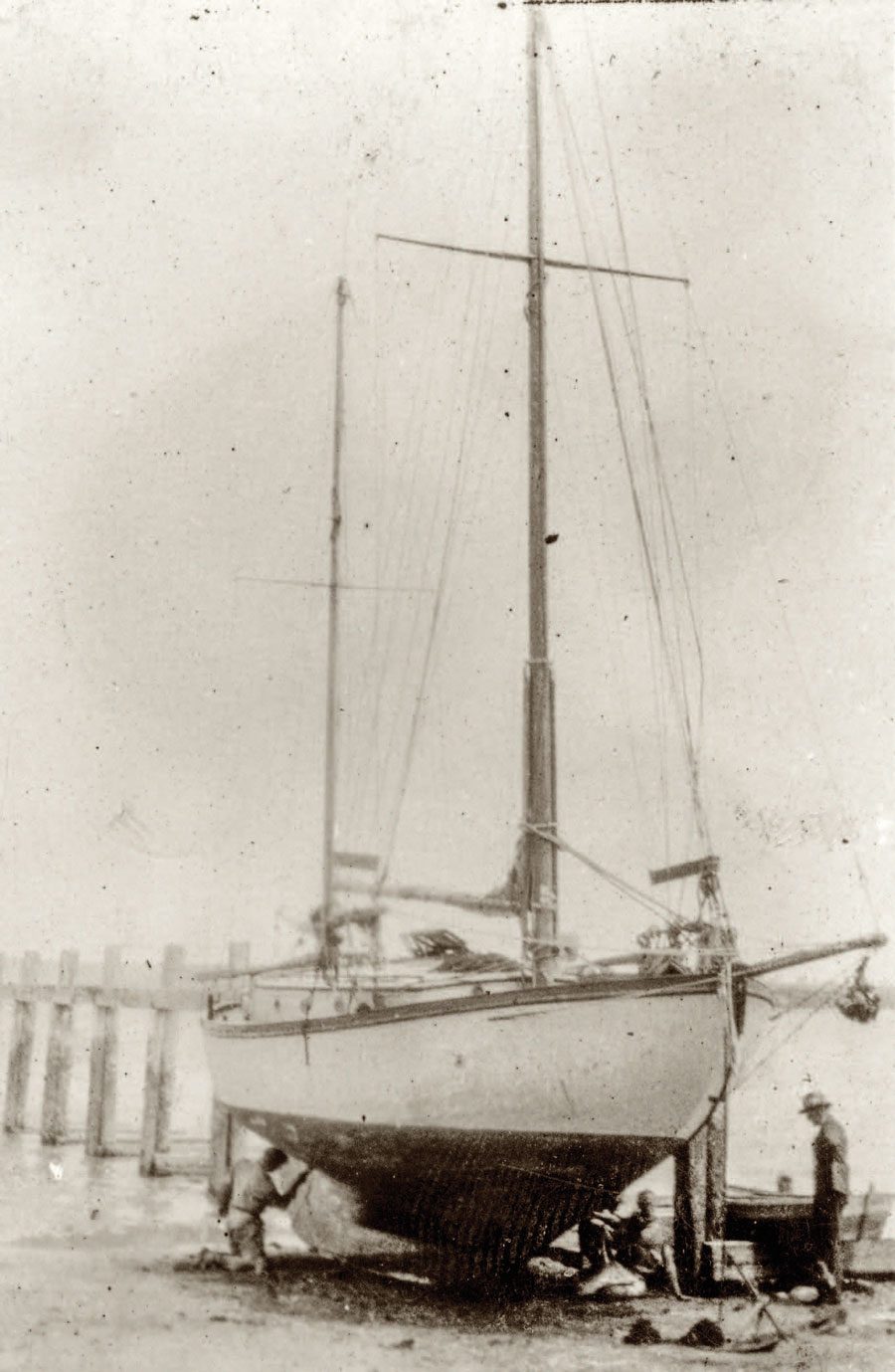 On the grid at Devonport Yacht Club.

George and Gunter set sail for New Zealand in November 1933. They made Apia in December, where George was lionised but keenly aware of the tensions in Samoa with its German colonial past and the recent poor administration by New Zealand. Days later, the arrival of the newish German cruiser Karlsruhe, with its strutting Nazi salutes and the blaring Horst Wessel Lied, convinced him that he could never return to Germany.

The voyage to Auckland ended as Te Rapunga raised Tiri Tiri Matangi on March 8, 1934 to be greeted by a launch with the press and photographers. She was soon cleared by the port doctor and towed to Queens Wharf. A crowd began assembling. A Dannevirke friend came aboard and told him that Mother Rangi had died. George was stunned. Then members of the Akarana Yacht Club came aboard and invited Te Rapunga to race in the upcoming Trans-Tasman race. George agreed without hesitation.

The race was to celebrate the centenary of Melbourne. There was talk of prizemoney totalling £5,000 for the Trans- Tasman race from Auckland to Melbourne in December 1934, the Centenary Regatta and a Melbourne-Hobart race to follow. Akarana Yacht Club made George and Gunter honorary members and gave them free use of the facilities of its clubhouse in Mechanics Bay, by the Eastern Tide Deflector, where TEAL were shortly to set up their flying boat base. 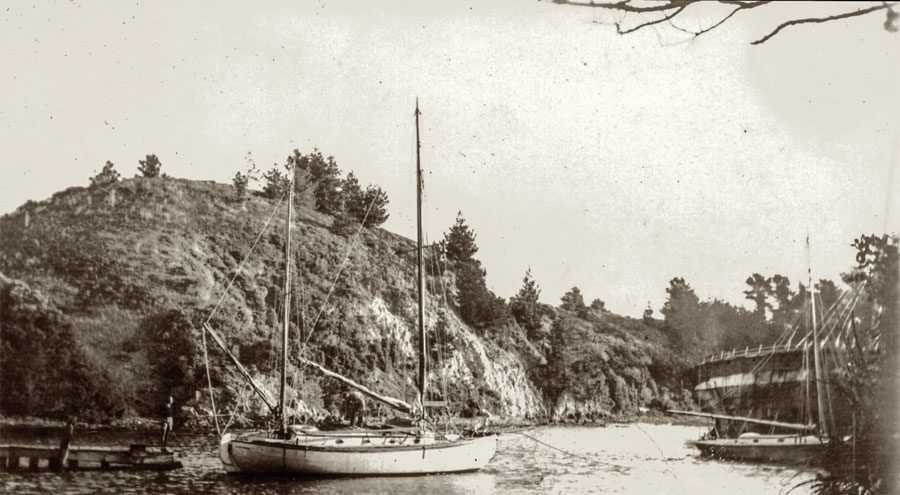 Te Rapunga in behind the wreck of Rewa at Moturekareka.

Akarana Yacht Club had first promoted the Trans-Tasman race and presented a trophy in 1931, in the depths of the Depression. The 1931 entrants were Teddy, Norwegian Erling Tambs’ Colin Archer double-ender, then on a world cruise, Alan Leonard’s Rangi, a Bailey & Lowe keel yacht, formerly the fishing boat Schopolo, built in 1903, and Oimara, a yawl from Melbourne. Teddy won, and returned to Auckland, to be lost soon after on Challenger Island, off Kawau.

George and Gunter spent the autumn and winter of 1934 taking part in local races, taking people out on excursions, and spending time with Charlie Hanson, at Moturekareka Island inside the breakwater made by the hulk of the square-rigger Rewa that Charlie had had sunk there. Te Rapunga then spent five months on the Devonport Yacht Club’s haul out area in a cradle being prepared for the race. George gave the usual popular lectures as “philosopher-skipper” to earn money.

The race was set for December 8. Eventually, the only other entrant apart from George Dibbern with Te Rapunga was Johnny Wray with Ngataki. Two great characters of the sea! BNZ