There are books and then there are dangerous books. Dangerous books cannot be forgotten and can change your life. Sailor/author Annie Hill wrote a dangerous book called Voyaging on a Small Income and it’s up there with the Edmonds Cookbook for life-changing impact.

The latter will enable you to cook like your grandma, while the former will leave you sailing a well-founded boat that fits like glove without the need to be enslaved to the almighty dollar.

I rate Voyaging on a Small Income as one of the more dangerous books I’ve read. It’s suitably out of step with our consumer-driven, post-Covid existence, but despite this, the message is simple and clear: LESS IS MORE.

The book was written when Annie and her then-husband Pete Hill owned a Jay Benford junk-rigged schooner, Badger. The boat was a finely-tuned living machine based on their principles of frugality that allowed them to sail a large chunk of the world on bugger-all money. 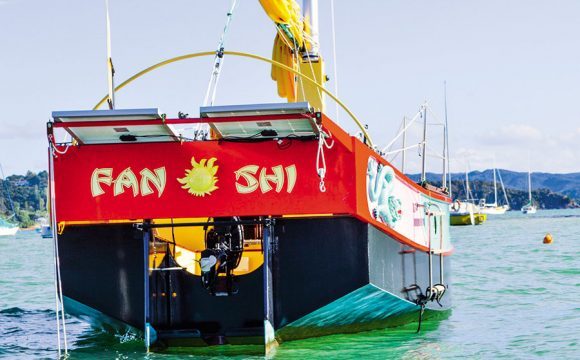 Solar panels across the stern tickle the batteries’ fancy.

Since 1975 when Annie started voyaging, she has covered over 165,000 nautical miles and in 2010 won no less than the Blue Water Medal of the Cruising Club of America. This journey has marked an evolution in the boats she has sailed. From a spartan Wharram catamaran to the intricately designed Badger there has been a basic premise to treat the idea of the cruising yacht as an unstoppable magic carpet.

After Annie separated from her husband in 2001, she spent seven years sailing with Trevor Robertson aboard the gaff cutter Iron Bark, including spending a winter frozen in the ice in Greenland, before purchasing an old Raven 26 from Picton.

Not content with the complicated marconi rig she set about converting Fantail into a modern junk rig. This rig configuration has appeared on the last four of her boats as it epitomises ease of handling and simplicity that has been developed and perfected for over 4,000 years.

While Fantail was a good boat Annie had something in mind that would suit her new-found cruising grounds of the Far North. The boat would have to be junk-rigged for easy handling and have a shoal draft so that she could dry out in the top of the many inlets and rivers of Northland. She also had to be a permanent home and be of a size that is easily built and handled by one. 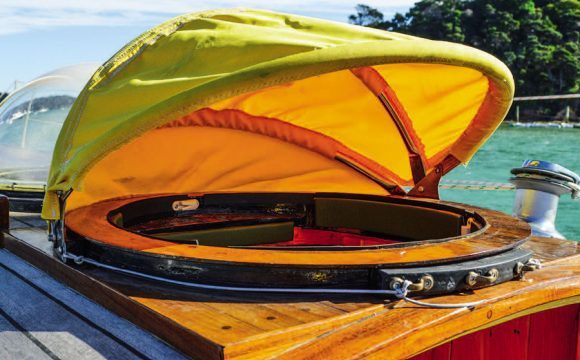 A dome helps Annie dry when the weather’s foul.

After extensive discussions with Canadian friend David Tyler, drawings for a 26-foot, shoal draft, junk-rigged cruising yacht materialised. “It took some thrashing out at times,” says Annie, “but I’m very happy with what we came up with.”

The working title for the boat was ‘SibLim’ (Small Is Beautiful, Less Is More) and a more accurate description would be hard to come by. A model was built with a Barbie doll as a skipper to give human scale and the construction of SibLim was started in a temporary shed knocked up at Norsand boatyard at Port Whangārei.

“I never thought I’d find myself building another boat. I’m not a clever woodworker, indeed I’m barely competent, but thanks to wonderful epoxy, good advice and the tendency of 12mm plywood to fair out any wobbles, I was able to build a beautiful and sound boat.”

The good advice bit came from Annie’s ability to draw good people to her. She even named them the SibLim Club and they came in all manner of guises – from local tea drinkers and scone bakers to the co-designer David Tyler himself, who sailed from Canada to help get Annie started on the build! 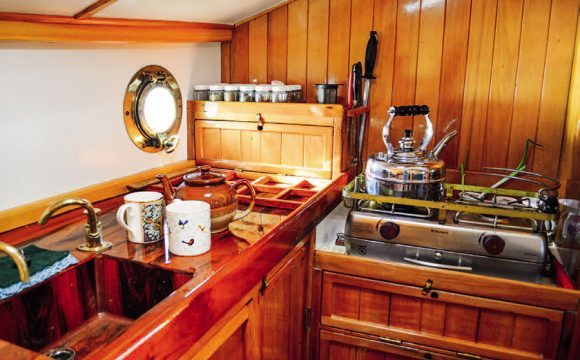 The build process was a well-documented five-year labour of love for Annie and it was only a few months after the launch – where the boat was christened with her official name FanShi – that I got to visit Annie aboard. From the dock at the Russel Boating Club, there was no mistaking FanShi and her distinctive lines. With her forward-raked mast and her joyful colour scheme, she stands out as not only different but well thought through.

After purloining a dinghy to get out to her, the first impression of FanShi is taken in from her commodious cockpit. With Annie sitting there you soon realise this is not a generic production boat full of gadgets and built for six people for a weekend getaway. Rather, it’s a finely-tuned piece of art designed around the 5’ 1” frame of her owner and her desire to live aboard on the Northland coast.

Annie has perfected the art of living frugally aboard and the attention to what works is well-honed over 45 years of being afloat. The junk rig is ingenious, with no stays to clutter up the deck. The ability to handle and reef the sail without having to leave the cockpit hatch is a boon for short-handed crews.

Despite the multitude of ropes there are only four running lines and, blessedly, the complicated-looking sheet is a single line. The other notable feature on deck is the asymmetrical bilge boards which are simply raised and lowered on a purchase system depending on what tack you find yourself.

These, along with a long central keel, allow the boat to sit upright on the bottom and squeeze into 71cm of water. The rudders also support trim tabs for an ingenious, home-built wind vane self-steering system and nestled in-between is the Tohatsu 6hp outboard which provides enough grunt for closequarters manoeuvring. 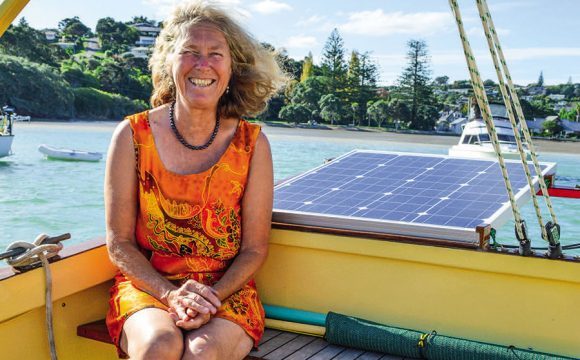 Keeping an eye on it all from down below is easy with the rotating pram hood dodger which reverts to the bubble dome in inclement weather. Swapping wet weather gear for carpet slippers and a nice cup of tea has a lot to be said for it.

With a beamy hull, flush deck and clever design the accommodation is palatial for a 26-foot (7.93m) boat. The main saloon has a very social U-shape settee with a fore and aft galley on the starboard side. The galley is large for a boat this size and, as Annie says, “I sail my galley.”

With tigerwood, recycled kauri and a mini solid-fuel heating stove to warm the winter air throughout, the interior is all glow and glory. The systems that go into making the boat work are equally elegant in their thinking. Instead of water tanks, there are ten 10-litre and 6 four-litre jerrycans under the cabin sole. They are easy to cart ashore for filling and, as each one is removed and placed under the sink, it’s easy to track water use.

FanShi’s centre sections are squeezed by the bilge board cases so the area is dedicated to storage and the composting heads. Forward of this is the sleeping cabin with double bunk, bookcases and the chart table with extensive storage. Because the beam is carried right through the length of the hull (and the bow is the traditional Chinese junk style) there is plenty of room.

Under the cockpit is a large storage area for all the tools and materials required for a liveaboard life. Back in the cockpit is two-tier seating with commodious storage beneath and a ‘members’ stand’ seat that spans the lute stern from which the solar panels and davits extend. The longer you are aboard the more ingenious the whole boat becomes.

While Voyaging on a Small Income is a dangerous book, it is perhaps FanShi that is the physical manifestation of a dangerous boat. You could slip off the planet and go bush in Northland for years at stretch, like some Rip Van Winkle in a boat built like a piece of well-fitted furniture.

Today ideas like this are called “sustainable,” which is just another way of saying they are plain common sense for an unpredictable world. BNZ

Another Woman on Water wraps up