Noel Priar was a boatman until the end. Even in his 80s, his rheumy old eyes would get a gleam on when someone dropped by to talk boats, or another refit job pulled into his backyard boat slip.

The wallpaper in his riverside home had sailing boats patterned on it and nautical memorabilia was shelved in the basement and boatshed.

Noel crossed the bar for the final time last year, but one of his great legacies was the ketch Pleiades, the 12m yacht built by a crew of schoolboys in the north Taranaki town of Waitara.

It was an era of legendary ocean wanderers and writers; Johnny Wray, Erling Tambs, Joshua Slocum and others, who inspired many would-be bluewater yachties to dream of running hard before the warm Pacific trade winds or battling over the cold dark seas of the turbulent Tasman.

But first they needed to build an offshore yacht – like Johnny Wray’s Ngataki – and many boyhood dreams dwindled away before this daunting task, or dreams of ocean voyaging were replaced by wedding bells, mortgages and dirty nappies.

Some young men resisted the domestic path, though, and lived their dream of building a boat and sailing away beyond the far horizon.

Among these were Noel and his mates from Waitara, who were just 16 years old and still at school when they started building Pleiades on the banks of the Waitara River in 1944. 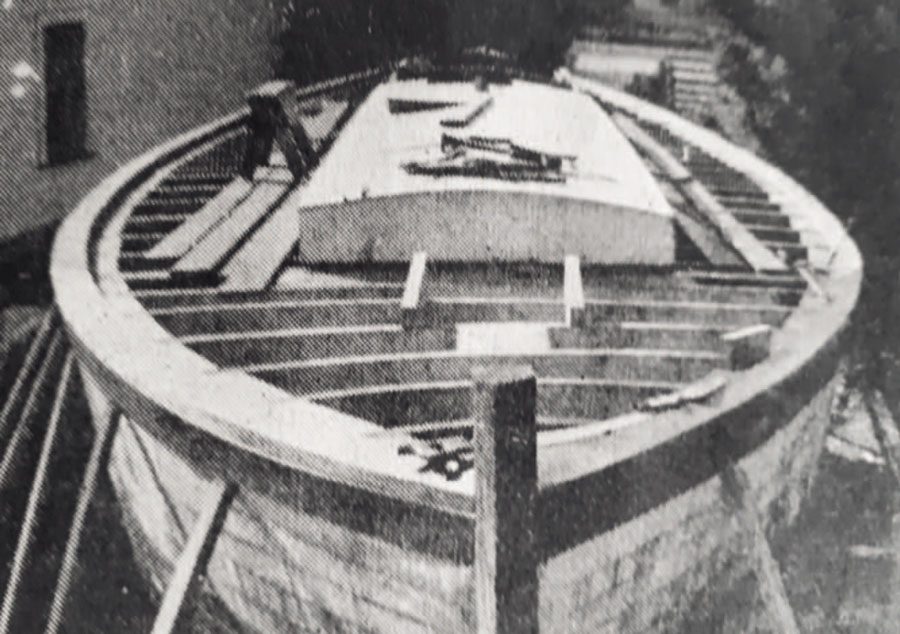 Unlike Johnny Wray, the Waitara boatbuilders had no kauri flotsam nearby to scavenge, but rimu was plentiful, so that became their material of choice.

The 6-inch x 2-inch (150mm x 50mm) frames were sawn and lofted beside the Priar family home but a sudden flood in the river swept many of them away and the design was altered accordingly to a single chine hull form, similar to Ngataki.

About £50 of the group’s building budget had been spent on books about boat building and the well-thumbed tomes were in constant use.

The teenage builders couldn’t afford power tools, so none were used; timbers were adzed to shape, holes drilled by hand and the steam boxes needed to bend the planks around the frames were made from oil drums and used water boiled on an open fire.

“The old hands told them you couldn’t build boats out of rimu,” a neighbour, Harley Watts, said, “so they soaked all the timber in creosote which was a by-product of the old gasworks – she stank of creosote all her life.”

The seams were caulked using mutton cloth from the freezing works, soaked in red lead, and putty. The boys’ schoolmates scraped melted tar off the roads on hot days to ‘pay’ them.

Five years later, Pleiades was launched into the Waitara River, free of charge, by local contractor Lionel Byran. Her steering wheel was off an old coastal trader, MV Kotai, and her bell came from another coaster that had been wrecked on the river bar.

The 46ft (14m) mainmast for her gaff rig was laminated from 15 lengths of timber. But the gaff ketch proved to be tender and lively under sail, so an extra 2.5 tonnes of lead was bolted to the keel, adding to the five tonnes of concrete and scrap steel in her bilges.

“A lot of parents around Waitara were left wondering where their lead pipes and sink drains had gone,” Watts said.

Fresh from her launching, there was no money in the kitty for an engine, and Pleiades was often sailed across the turbulent Waitara Bar for the 12nm passage to New Plymouth. “They’d sail to town for a party at the nurses’ home – and sail back again the next day,” Watts recalled.

The little white gaff ketch was kept tied to the road bridge in Waitara and became a tourist attraction. Many people drove from New Plymouth to look at her and dream; supportive Power Board workers rigged floodlights for the boys to keep an eye on her during flooding in the river.

But it was two years before Pleiades put to sea. Finances were limited and in post-war New Zealand, marine hardware and fittings were difficult to procure. Much of her hardware was fabricated and galvanised in the freezing works workshop. The water tanks were 338-litre fuel tanks from an aircraft, bought at an army surplus store and steam-blasted inside. Pleiades was wired for six-volt lighting but her crew preferred gimballed kerosene lamps and used them instead.

After rounding North Cape, the first port of call was Whangaroa and from there they cruised southwards down the coast to Auckland. After five weeks in the Queen’s City fitting out and preparing for their Tasman Crossing, Pleiades set sail for Whangaroa where Graham and Robertson left to return to work and Les Arms joined the crew.

On November 24, 1952 the youthful crew laid off a course for Lord Howe Island and, after a stormy passage, arrived 12 days later. The little yacht from Waitara spent two weeks anchored near the moorings used by Tasman Empire Airways Ltd (TEAL) flying boats on their thrice-weekly flights from Sydney.

But the bright lights further west beckoned so Pleiades set sail, arriving in Sydney on December 21.

None of the boys had left New Zealand before and their only contact was Malcolm Campbell’s boatyard at Rose Bay, which was the terminal for the TEAL flying boats that flew to Auckland and Wellington.

For the first – and last – time in her life, Pleiades was hauled out of the water for cleaning and antifouling. After that she was always careened between tides.

And meanwhile her crew enjoyed the allures of city life in downtown Sydney. Robertson, who’d found his BNZ teller’s job in Waitara altogether too dull by comparison, re-joined the ship.

But life in Sydney started to pall in favour of the open sea, so Pleiades set out again at Easter 1953 and travelled about 130km up the Hawkesbury River to a town called Windsor, accidentally taking out power lines on the way with her mainmast.

Two weeks later she sailed downriver again and on to Gosford where her crew all found work and stayed for four months.

A letter soon arrived at the Pleiades mail drop: “It has come to the attention of the Collector of Customs that the yacht Pleiades has moved from Sydney Harbour without permission,” it said, and demanded that future movements of the yacht be notified. Noel still had the original letter. Handwritten across the foot of it was: “and he can go and jump in the river!”

Try getting away with that these days!

Next port of call was Gladstone and for this leg they were joined by a local couple, Lance and Ellen Ellis, and their kelpie dog Prince. The couple got off in Townsville to travel on to a job in New Guinea, but Prince stayed on as Pleiades’ mascot.

By now funds were dwindling and there were no offers of work to replenish them, so the crew of Pleiades reluctantly turned her bows southwards and east towards Waitara. Crew dog Prince was signed off in Gosport and 14 calm days later the yacht coasted into Port Taranaki.

Back up the Waitara River after 14 months away, Pleiades was due for a total refit. The trusty Kermath was replaced by a 60hp Ford diesel and her rig changed from gaff to Bermudan ketch. She hosted Miss Waitara on board for the annual Waitara River Regatta and was used to raise funds to build a town swimming pool – among other civic duties. Then on Boxing Day 1960, Pleiades again set sail for the open sea.

This time a circumnavigation of New Zealand was in their sights and, in quick succession, they sailed for and from: New Plymouth, Nelson, Westport, Greymouth, Fiordland, Bluff, Rakiura Stewart Island. Then north again to Dunedin, Oamaru and Timaru, followed by Lyttelton, Akaroa and Wellington. Pressing on north, they visited Napier, Gisborne, Tauranga, Whitianga, Great Barrier Island, Auckland and Kawau Island. Onwards Pleiades pressed – Whangarei and Whangaruru, Russell and Whangaroa and on around North Cape, Cape Reinga and home to Waitara.

All in all, the doughty little yacht covered 3,000nm in a little over three months but work called: Mallet to finish his electrical apprenticeship and Priar to return to duty as a telephone exchange operator.

For the next 11 years, Pleiades lay at her mooring in the Waitara River, but she was well-used. Coastal voyages to Kawhia and Raglan and Whanganui or New Plymouth were regular events. Many Waitara people learned to sail in the yacht and she was the pride of the district. A local marching team bears her name and a street is named after her. No town festivity was held without Pleiades parading in the river, her decks awash with people under a rustle of fluttering signal flags.

But on the night of 24th February 1971, all this changed. The worst floods ever recorded dumped 352mm of water on the area within 24 hours. When dawn broke, the storm-battered people of Waitara came out to start cleaning up their town.

But something was missing.

Pleiades, the pride of Waitara, was gone. Turbid brown water raged over the spot where the yacht had been moored but she was nowhere to be seen.

Later that day her holed hull, both masts broken, was found thrown onto a rocky beach about 2.5km from the river mouth. Pleiades was no more, broken beyond repair and Waitara mourned.

There was no shortage of volunteers to help with the salvage and the steering wheel and ship’s bell were recovered. Other wreckage washed up two weeks later, about 250km northwards.

Years later her mangled prop was straightened and used by another Waitara yacht to retrace Pleiades’ course across the Tasman Sea.

The pride of Waitara was gone – but a replacement was planned. Pleiades 11, a strip-planked centre-boarder built to an Orams design, rose from the original boat’s building site and took on some of her predecessor’s duties.

But there could only be one Pleiades, the pride of Waitara, and the new boat was eventually sold.

So when you drive into Waitara from the north and see the street sign named ‘Pleiades,’ it’s got nothing to do with stars or heavenly bodies and a lot to do with sailing, adventure, determination and grit.

JACK BROOKE AND WAKAYA - The science of great design