I recently bought a photograph album on TradeMe with some cracking 1940s–1950s images of Frostbites. But who were the people in the pics and what stories were in there? Thanks to huge help from Robin Elliott and Robert Brooke, Harold Kidd teased the stories out.

From the connections of the people and the boats shown, we figured out that the album belonged to Noel Edward Howe, the eldest son of Cyril and Annie Howe of 6 Hastings Parade, Devonport. Noel was born in 1924 and contracted polio, probably in the 1937 epidemic, which left him partially crippled.

He was nevertheless determined to compensate with vigour. He poured it into yachting and the companionship he had at Wakatere Boating Club, later with his younger brother Ken Howe, born in January 1935. 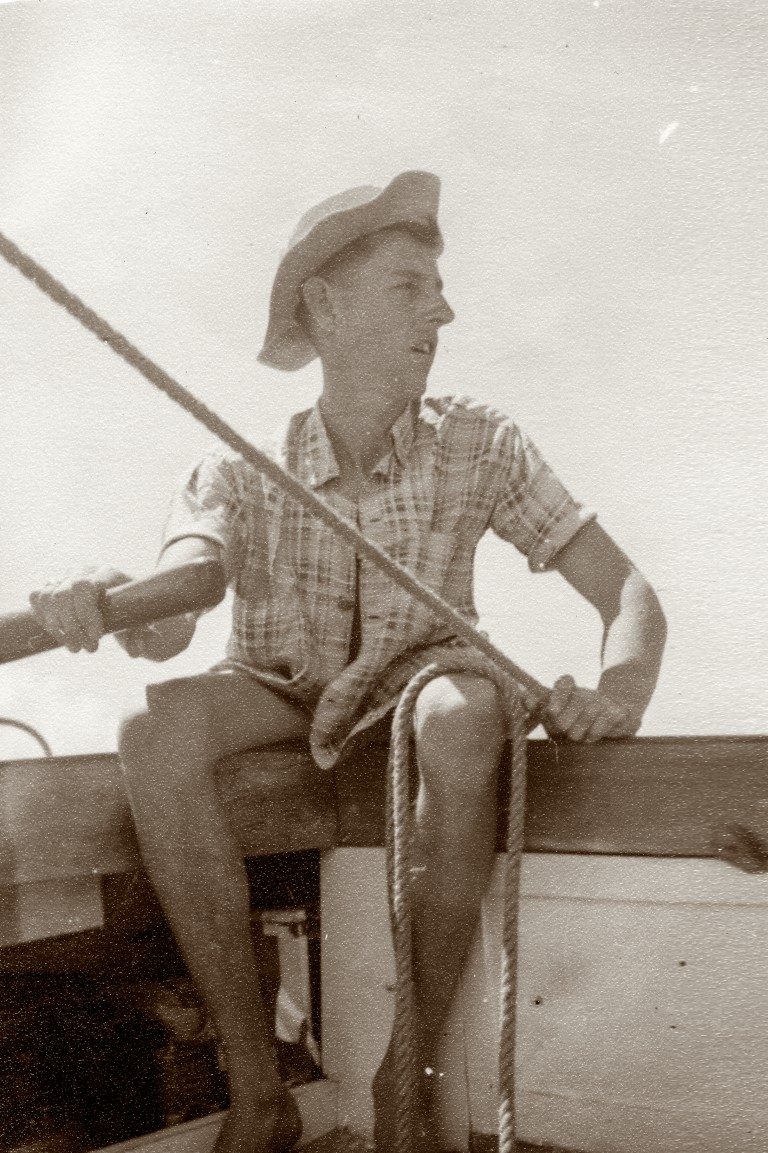 Among the most important of those connections in the pre-war years were boatbuilder Leonard Allan Waters known as ‘Snow’, Ron Hunt, the brother-in-law and joint founder of the Wakatere Club with Jack Brooke, and Mac Taylor, later a well-known yacht broker.

Snow Waters was born in 1915 and, with the Wakatere Commodore, G.S. ‘Oatie’ Miller, was responsible for many of the Frostbites built in that brief pre-War period. Jack Brooke had adapted the American and English Frostbite designs for local conditions in 1938 to replace his own ultra-simple 14ft Wakatere square-bilge design that had proved to be a bit too basic. 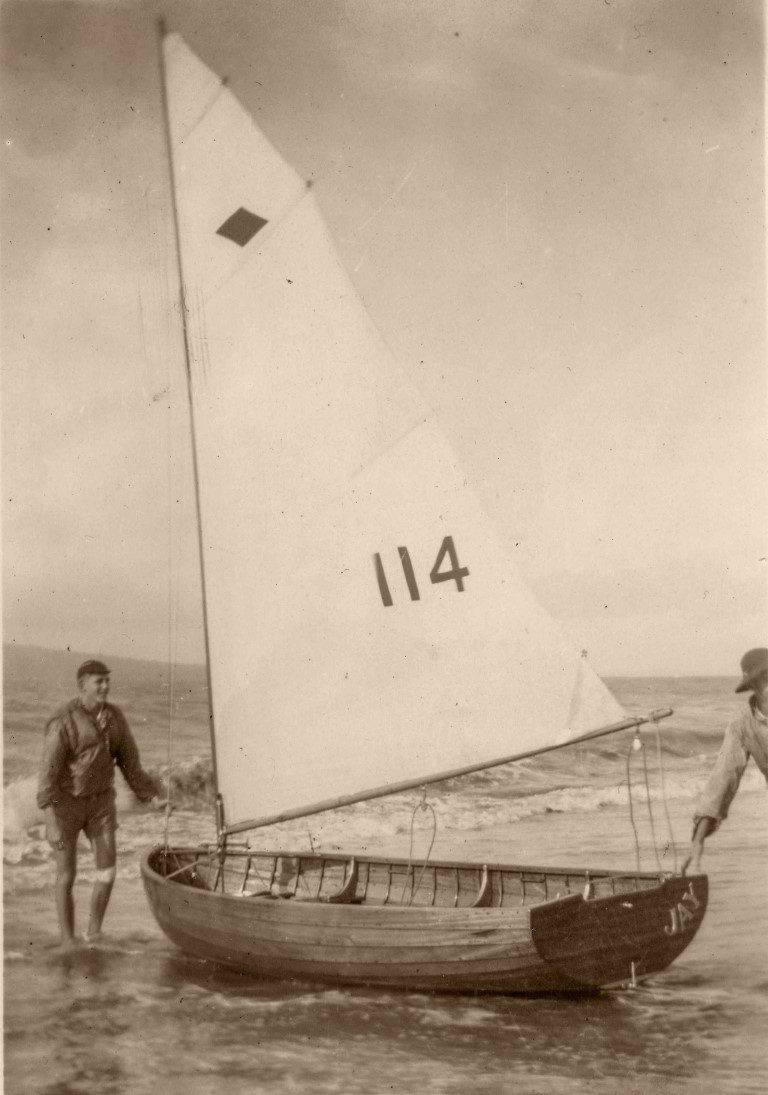 A pretty clinker-built, cat-rigged 11ft 6in dinghy, the Brooke Frostbite immediately took off as a class. By June 1939 36 boats had been built at Wakatere’s clubrooms on the beach at Narrow Neck or at youngsters’ homes.

Snow Waters, Oatie Miller and Ron Hunt built one of the first Frostbites, Jaibee, sail number #3. Snow built Joker, Frostbite #6, for young H.M ‘Mac’ Taylor in 1939 too. Snow was a prodigious builder and built Jay, #114 for himself in 1942. In 1945 Noel Howe bought Jay for his brother Ken, then just 11.

In 1946 the Wakatere Club sent a big contingent of Frostbites to the Freshwater Championships in Rotorua. 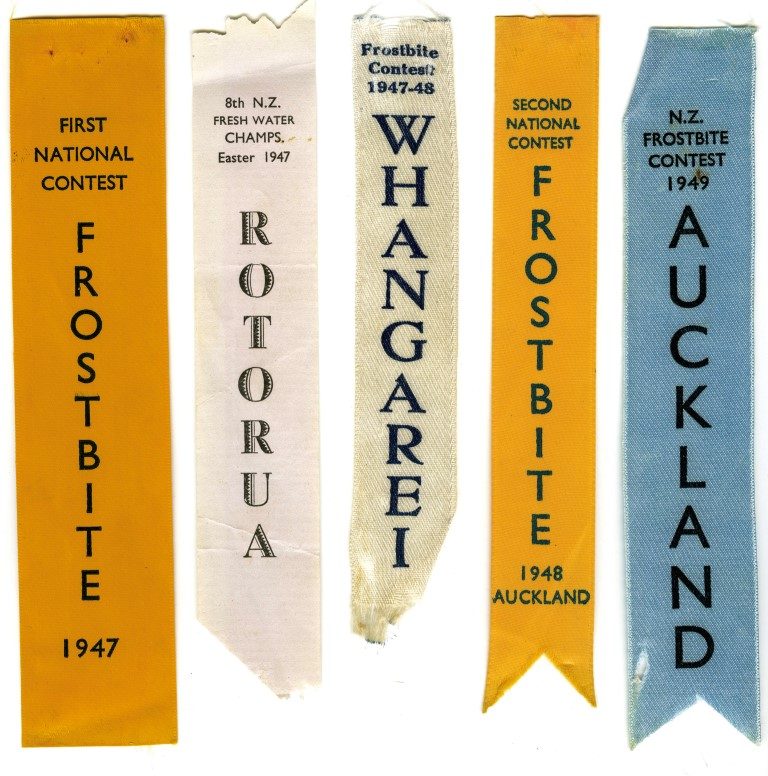 The Winstone brothers had been associated with Jack Brooke since they launched their Colin Wild-built A Class keel yacht Nga Toa in 1926 and the founding of the Wakatere Club. They were Frostbite fans too.

The Winstones lent the club two of their big International trucks to take the boats down to the lake. Detours were necessary because the loads were too high for some of the bridges on the main road down.

Noel, with his friend Max, sailed Jay at Rotorua and won the Championship. In 1947 he repeated that feat and won Wakatere’s Balmain Trophy as well. Noel handed her back to Ken for club sailing. Ken went to Takapuna Grammar in my year, and became the school’s champion cross-country runner, in the 4th Form I think.

I recall, too, that he excelled in inter-secondary school competitions and was later in the company of runners like Murray Halberg. Noel was Vice-Commodore of Wakatere in 1949; Ken followed him as a Committee member in 1952.

Moving on from Frostbites, the album has some images of Mac Taylor’s 22ft keeler Sheryl. Mac built Sheryl in his backyard at Mays St. Devonport and launched her in late 1945 although he had bought some of the timber from Sheryl’s designer, Bert Woollacott, as early as 1942. 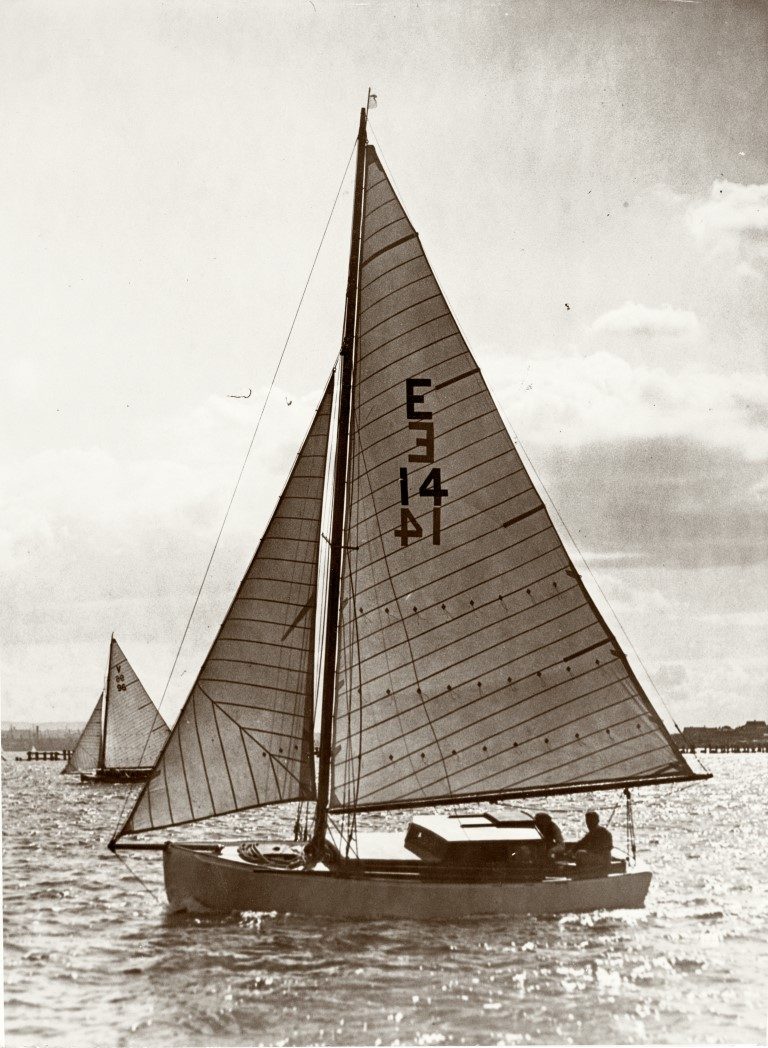 Snow Waters had assisted Mac in the build. In Sheryl (E14, later F12), Mac and his crew celebrated the euphoria of the end of the war with a wonderful Christmas cruise in 1945. Noel Howe was one of the four-man crew which cruised north to the Barrier, via Kawau and Leigh, and back via Coromandel and Waiheke. One can only imagine the intense pleasure this cruise gave these young men after six years of war.

In the winter of 1946 Ron Hunt, who had extensive experience in 18ft M Class boats decided to build a 14ft X Class to take part in the resurgence in interest in the class in Auckland. With Bernie Skinner and Noel Howe he built the X Class 14-footer Mokoia (X31). 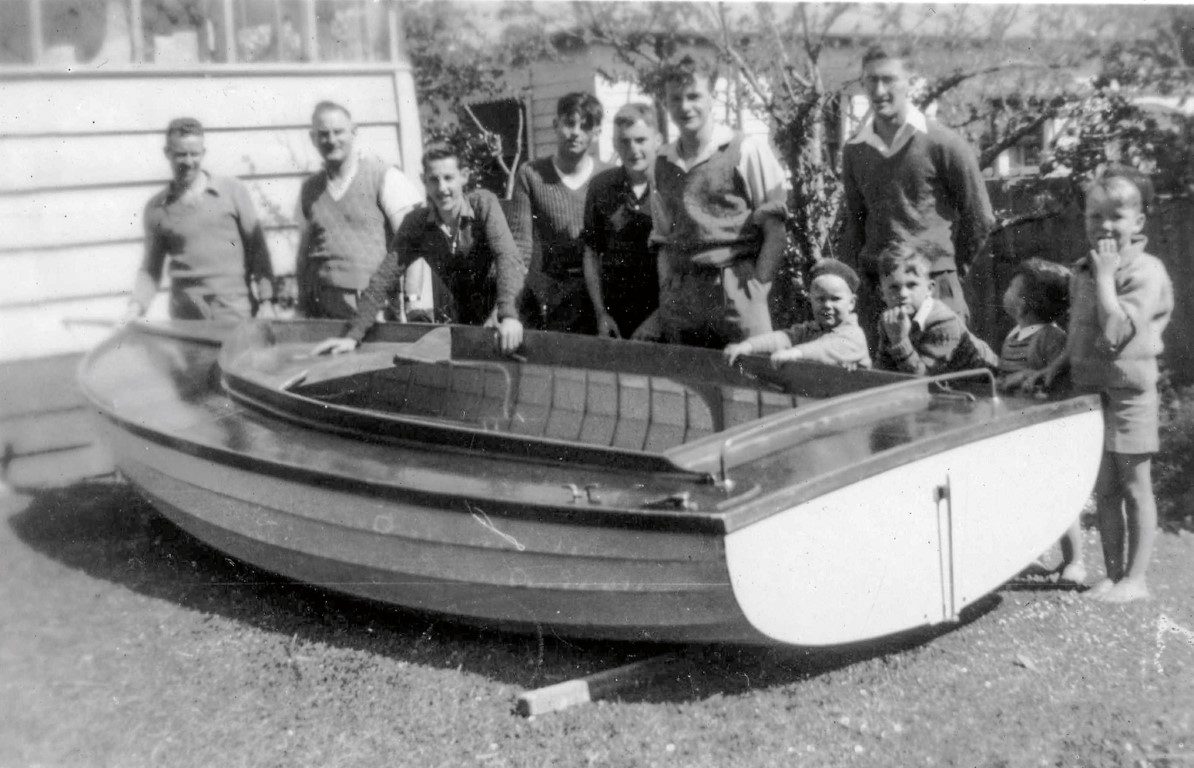 Ron raced her only for one brief part of the season. She was on scratch in a Tamaki Yacht Club race in November 1946, probably because it was her first entry, and was in the 1947 Anniversary Regatta, but faded away soon after, as far as I can see.

Just the same, Noel had a most successful Christmas cruise in Mokoia to visit the Hobbs family at Whangaparaoa in the company of the Devonport 18-footer Vision. For some reason, despite her provenance, the proud owners came to call Mokoia ‘a flop’ and she disappears. Her sail number X31 was taken by Sam Mason’s Lamina in 1949. 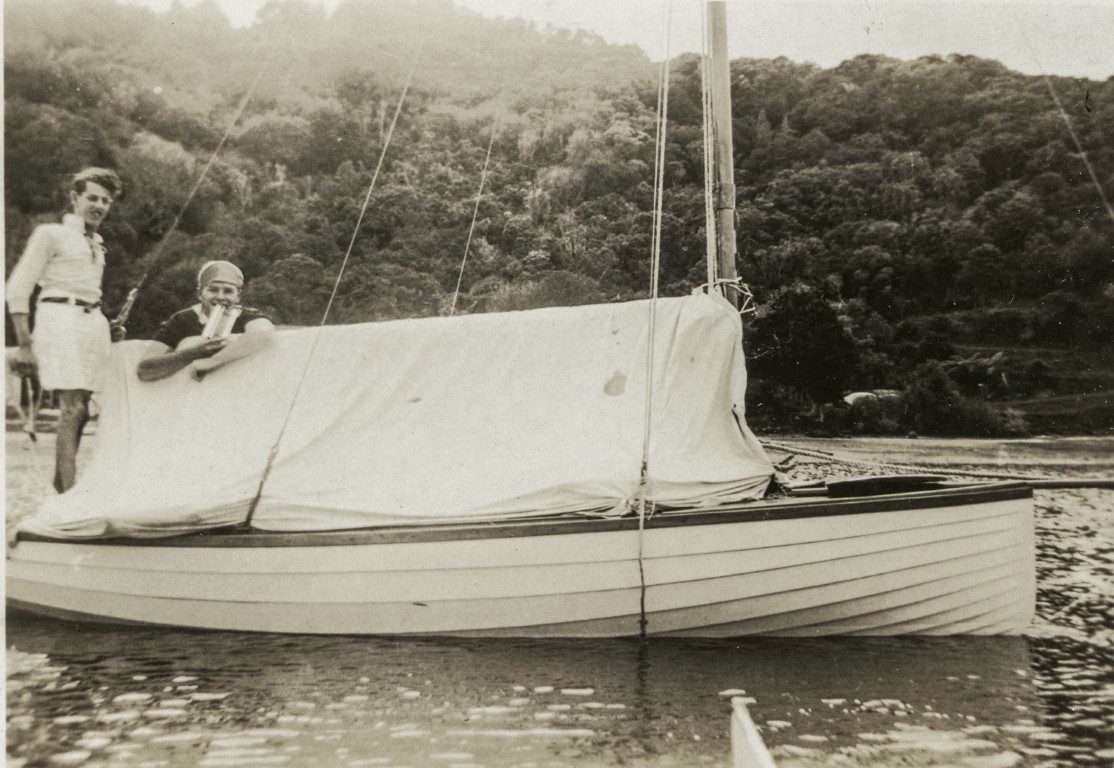 During the winter of 1947 Noel bought the square-bilge 18-footer Paroro, quite a smart and competitive centreboarder. Paroro had been built in 1932 by C. Philpott and N. Hope as V40. The first owners sold her in 1934. In 1937 she was owned by Harold Cleghorn, the famous weightlifter.

Harold sold her to Howard Pascoe of Onehunga in late 1939 to race on the Manukau. When Howard Pascoe sold her to Noel Howe in 1947 she came back to the Waitemata. Noel and his crew did very little racing in Paroro but they had Christmas cruises for two seasons.

Noel Howe appears to have done other things than yachting during the 1950s. In 1958 he married Rosalind Renny-Tailyour. By then he was working for Snow Waters at his yard at 20 Hillside Rd, Glenfield as a boatbuilder.

Some fine launches and yachts came out of that yard including Poaka (1959), the Jack Brooke-designed Mapuna (1961), Tarata (1962), Ora Kia (1962), Kwan Yin (1964), the magnificent motor sailer Korara (1962) and, my favourite, the Alan Mummerydesigned 55ft yacht Waiata II, which Snow built for himself in 1971. Alan Mummery then lived in a lovely old villa on the hill at what was then the end of Hillside Road, overlooking Snow’s yard. The synergy was strong between them. 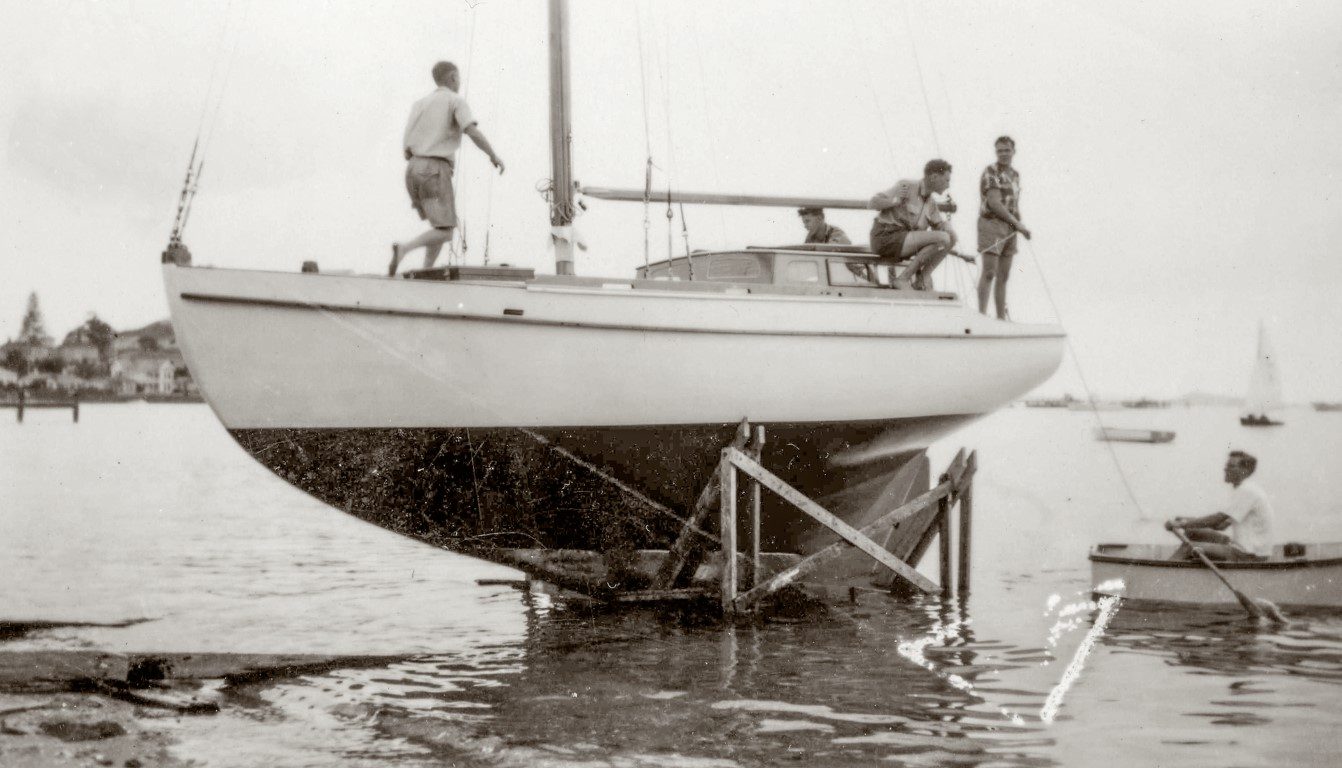 Back in the mid-1960s, Snow and Noel took up building some more Frostbites, including Arataki #8 and Aniwaniwa #16, and ensured they were raced by youngsters consistently at the Wakatere club. In 1966 Snow designed a pretty raised-deck keel yacht, Hinemoana, F26 for Noel and Rosalind, which Noel built at Hillside Road. She was a 33ft 7in loa x 27ft 6in lwl x 9ft 4in beam x 4ft 1in draught sloop with 248 sq ft of sail, 4470lbs of ballast and was fitted with a 33hp Perkins diesel. 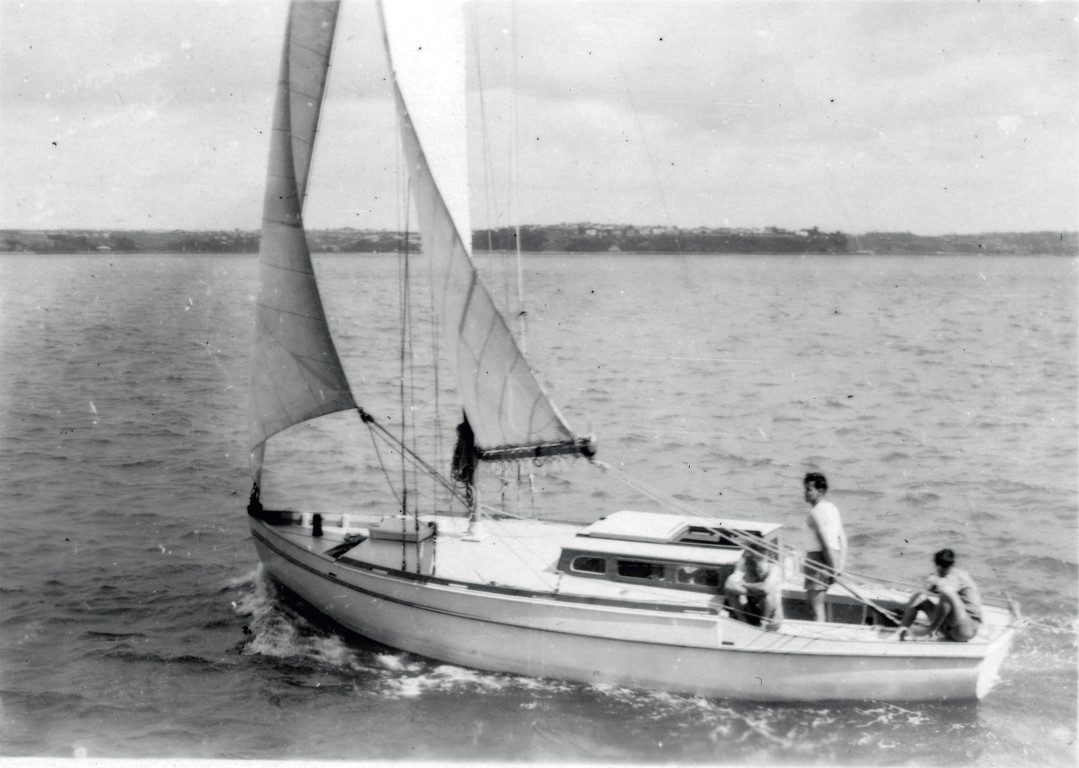 They launched Hinemoana in December 1966 in time for yet another Christmas cruise. They had many more Christmas cruises too, at least until 1988, when she seems to have been sold. Noel died in 2005 and Rosalind in 2016.