Some yachts seem to attract bad karma and wind up forgotten, rotting away on a backwater mooring. Others lead lucky, charmed lives. Words and photos by John Macfarlane.

Back in 1974 Auckland boatbuilder Chris Robertson designed and built a model of what was intended to be his next yacht, a fast 11.8m cruiser/racer. The inspiration came from two of his previous designs, Spectrum and Quando, but he massaged the model’s lines slightly to better suit the then popular IOR rule.
This hull was being planked when Robertson’s good friend and client Don Harland walked into his shed, saw the yacht and said, “I wouldn’t mind a yacht like that.” Robertson’s pragmatic reply was, “You can have this one if you like and I’ll build myself another.” 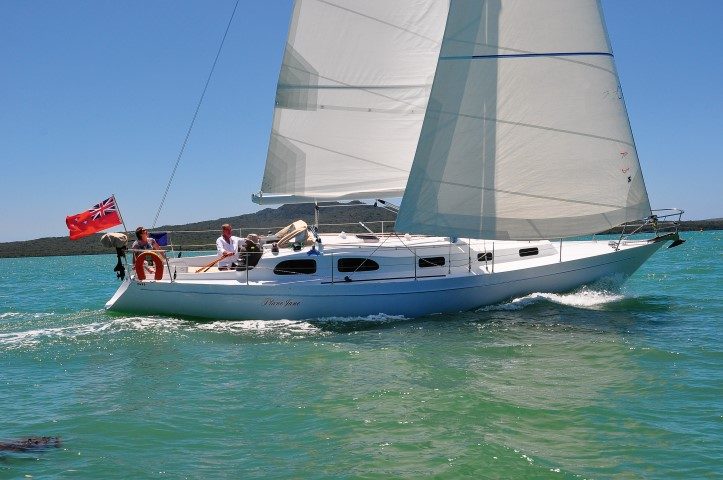 Harland bought the yacht and finished off the bare hull and decks. Named Plane Jane, he launched her in 1976, and so began the start of 40-year old love affair between a man and his yacht.
Harland’s previous yacht was the Robertson-designed-and-built 11.8m Susan Jane, named after his daughter Susan Jane. Plane Jane partly continued the naming theme, but the addition of ‘plane’ was more about Harland’s hopeful wish his new yacht would plane downwind rather than being plain viewing.
Plane Jane was designed as cruiser/racer with offshore capabilities and Harland had visions of doing some offshore races in her. But after the 1979 Auckland to Suva race and the 1984 Auckland to Nelson race, he decided to stick to local waters and, over the next four decades Plane Jane became a regular sight on the Waitemata Harbour and Hauraki Gulf.
Plane Jane became an integral part of the Harland family. Besides successful local racing, she was regularly cruised to the Bay of Islands, Whangaroa, the Mercuries and Arid Island. But by the early 2000s she was looking increasingly plain and Harland was struggling to maintain her. A motor mechanic by trade, he had designed and built most of the boat’s original gear including the winches, headsail furler, anchor windlass and deck fittings.
While these fittings may have lacked finesse, they were strong and worked well in their owner’s hands, at least in the early years. But as they aged they became less than reliable – especially the elderly Yanmar engine.
Don Harland died in 2016, leaving his wife Wilma with a quandary: what to do with Plane Jane? Many yachts in this situation are sold off for a song to an uncertain future and the next owner determines their fate. A few are restored, others butchered, many rot away forgotten. 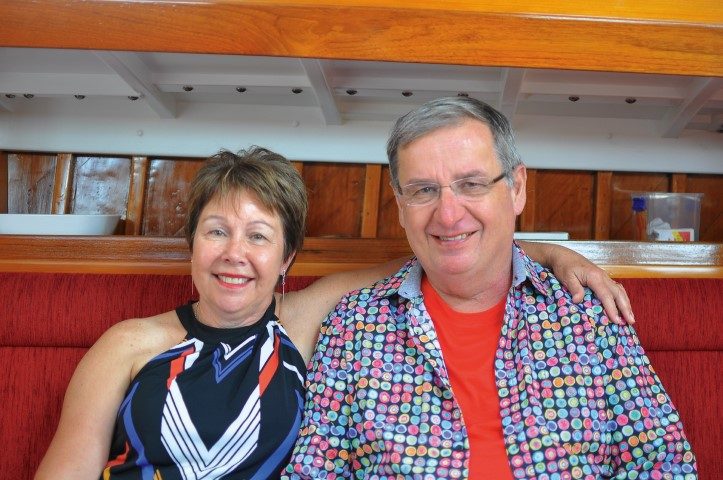 Fortunately, Susan and Stephen Harland-Smith had founded what had by now become a successful business importing medical diagnostic equipment, and decided to buy and restore Plane Jane to her former glory.
To avoid any family ill feeling, they wisely purchased Plane Jane from Wilma at a fair market price, and even more wisely, commissioned Chris Robertson’s son Conrad and his team at Robertson Boats to undertake a full restoration. The wheel had come a full circle.
Like countless owners before them, the Harland-Smiths approached the restoration full of enthusiasm and wearing the customary rose-tinted glasses. “We thought it would take three months – it took eleven,” laughs Susan.
The Robertson team discovered that several of Plane Jane’s keel floors and her timber deadwood had fractured. Someone in the family – no one’s quite sure who – had apparently put Plane Jane onto the bricks some years ago.
Thanks to her solid construction there’d been no sign of damage at the time. Robertson had built Plane Jane with triple skin, glued kauri planking over laminated ribs at 150mm centres, with three bilge stringers either side of the keelson and transverse keel floors. While the use of numerous laminated ribs rather than the more typical longitudinal stringers is very time consuming, it does provide tremendous extra strength. 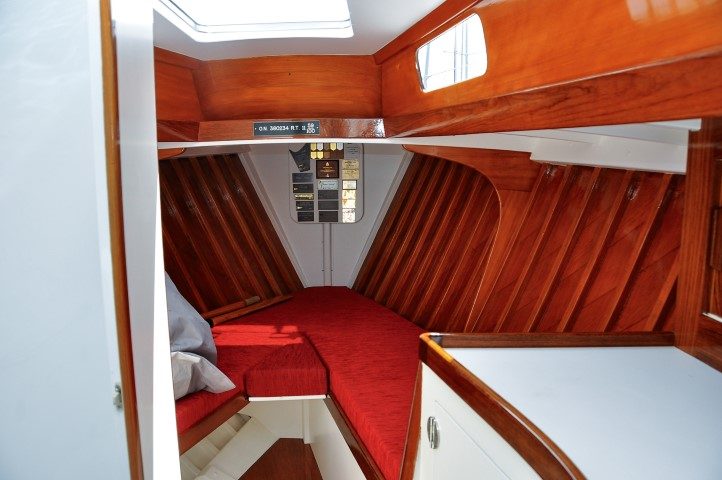 To repair the damage, Robertson’s rebuilt the entire keel and mast step area with new deadwood, keelson, laminated yellow cedar floors and a longer, stronger mast-step. The upper keelson – jarra – is also new and while most of the original monel keelbolts were retained, some were replaced with 2205 stainless bolts. They also re-glassed the entire hull, a big job in itself as the boat was sitting upright.
To facilitate cruising and swimming, the hull was lengthened some 600mm with a closed cell foam and epoxy extension incorporating a walkthrough transom.
In common with most yachts of the era, Plane Jane was fitted with a skeg-hung rudder. This skeg’s been retained and strengthened, while a new, deeper rudder with a more modern profile and better aerofoil sections has been built in closed cell foam and epoxy over the original stainless shaft. The lower portion of the rudder extends forward of the skeg to provide some balance to the helm.
The companionway, originally offset to port, was relocated centrally. The original cockpit was floating, i.e. not braced to the yacht’s frames. But it’s now been fitted with twin struts at the forward end incorporating the companionway ladder. 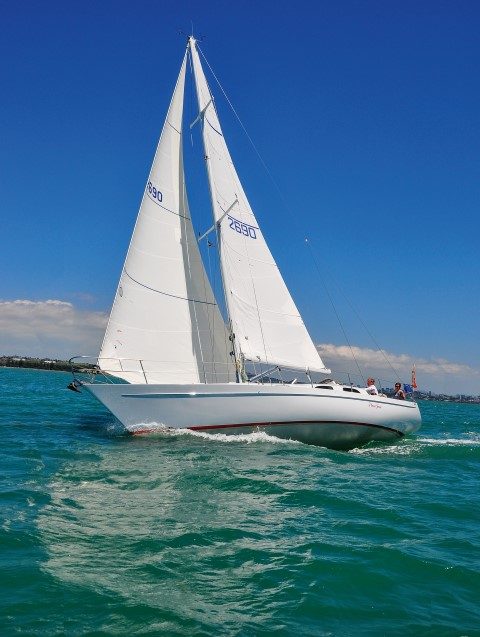 The original mast was retained, but required considerable work including new spreaders and a new base with turning blocks. After being stripped back, the mast was painted white and installed with new standing rigging, turnbuckles and stainless chainplates.
Harland’s original homemade carbon fibre boom was replaced with aluminium, also painted white. Robertson’s crafted all new stainless steel fittings including stanchions, cleat bases, chainplates and other deck fittings. The toe rail was replaced and a stainless steel rub rail added.
Sail handling systems received a major upgrade with a Profurl headsail furler, new Lewmar winches, headsail and mainsail travellers, cars, turning blocks and jammers. There are new opening hatches throughout, along with dorade vents. A Maxwell anchor windlass has a remote control switch in the cockpit for hassle-free anchoring and the anchor locker was rebuilt. 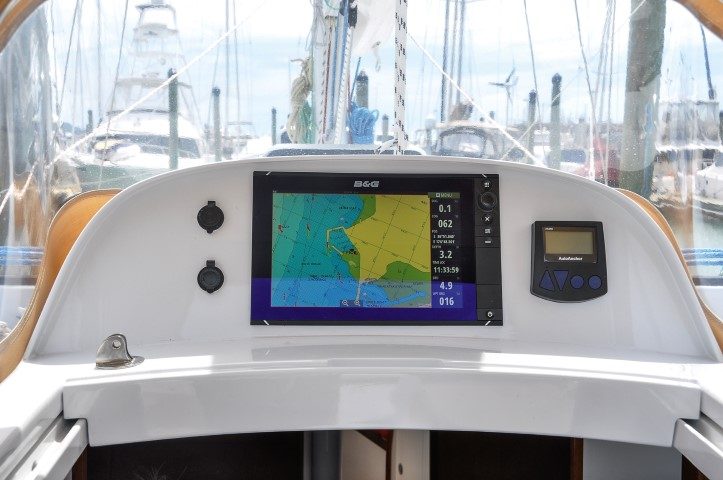 One of many neat touches are the hardwood blocks beneath each stanchion base raising them off the deck. This will prevent freshwater leaks around the stanchion bolts into the yacht’s structure, an all too common occurrence with timber yachts.
A number of GRP fittings were custom made including winch handle holders, a pod over the companionway to house a chartplotter and a recessed housing for the engine throttle/gear lever in the starboard cockpit side.
After glassing, the entire boat was repainted in International two-pack paints, but apart from the name there’s no graphics, giving a refreshingly clean look. Below decks, the original interior layout was largely retained apart from removing part of a bulkhead aft of the galley/chart table area to open the area visually.
The heads compartment was completely rebuilt, then epoxy coved, glassed and painted in two-pack, so it can be used as a shower without the risk of rot. The remainder of the interior was stripped back, before being painted in single pot paints and varnishes. The saloon, with its crimson squabs, is very traditional.
The galley stove is now LPG fired and the LPG bottle has been located in a dedicated cockpit locker. Any escaping LPG drains into the cockpit and then overboard through the transom opening.
The engine was replaced with a new, four-cylinder 38hp Nanni diesel in the original position under the galley bench. There’s also a new propeller shaft and dripless coupling and, on the business end, a three-blade Kiwi propeller. 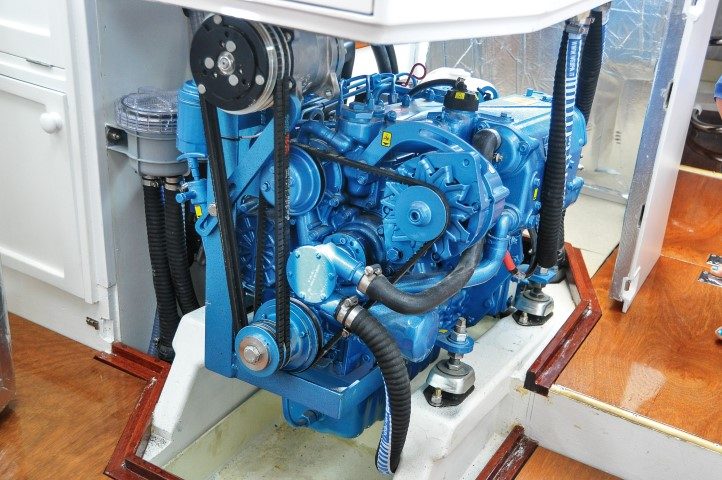 All the electrics are new including twin, higher amp-hour batteries, tinned wiring, LED lighting, smart charging system, comprehensive switch panel, stereo and full sailing instrumentation, including twin chartplotters. One of these is mounted in a custom GRP pod over the companionway – the other is mounted downstairs at the chart table.
Typically for these restoration projects, both time and financial budgets went out the window, but as Stephen Harland-Smith points out, this project was never about money. Rather it’s been about the couple restoring and protecting a family heirloom – which happens to be a yacht – for future generations.
“It’s been a marvellous experience and a lot of fun,” says Susan Harland-Smith. The relaunching ceremony was an emotional time, the common thought from several family members being how pleased Don Harland would have been seeing the boat looking so good. 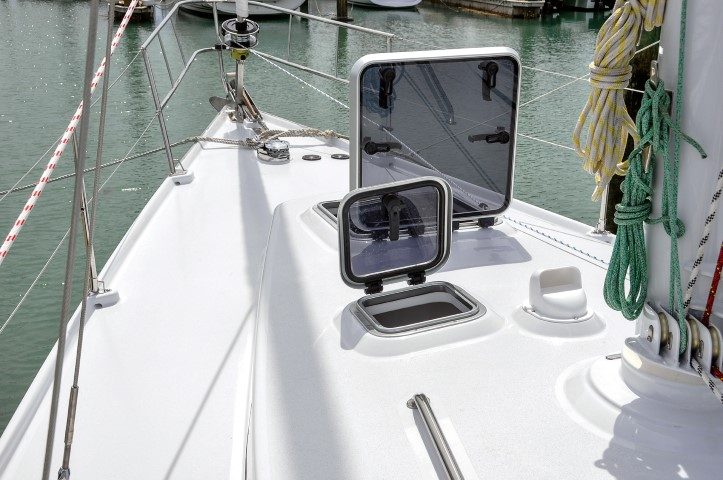 In terms of equipment and systems, Plane Jane’s in considerably better shape now than when she was first launched and, given a modicum of care and maintenance, should be around for at least another 42 years. Certainly, that’s the intention of the Harland-Smiths.
I came away thinking Plane Jane’s a very lucky yacht. Not only has she been loved by her original owner for over four decades, she’s just as loved now by his daughter and son-in-law. Additionally, the son of her original designer and builder has fully restored her with integrity and craftsmanship. Given the pride of her new owners in the end result, it’s hard to see her luck changing anytime soon.
Plane Jane, a blessed yacht, now anything but plain.

Birds in the bilges

The wind is free