What started as a fairly orthodox solo voyage from Vanuatu to New Zealand turned into a nightmarish fight for survival – and the eventual loss of a cherished boat. Story by Phil van der Mespel.

When I turned 50 my father in-law gave me a card saying he was passing the family yacht on to us. Waimanu – a Townson 32 (9.6m) – wasn’t ideal for ocean passage-making, but others had done it, and so would I.
I spent five years getting her ready for our Pacific adventure. Part of the process was renewing the mast, rig and sails. A good friend and I set off on a two-handed shake-down around the North Island. In Nelson my crew got an emergency call, leaving me to solo up the Tasman and home. I loved it. 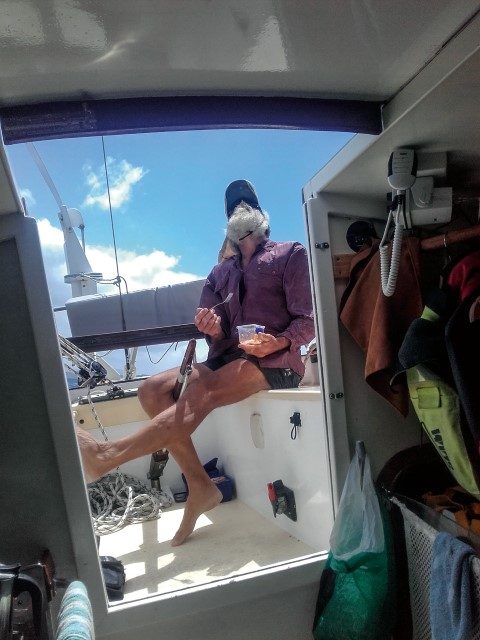 After the summer race season last year (2017) I hauled her and got stuck in. In addition to getting Waimanu ready, I did an Advanced First Aid Course, Life-raft Training and bought the gear to meet Cat 1.
I cleared customs at Marsden Cove. It was so easy; load up at Sandspit Marina, day sail up the coast, clear, and away. But right at the Whangarei Heads, I got caught by a massive williwaw gust – well over 50 knots. Boat speed climbed to over 11 knots. My home-built self-steering (SSG) somehow got caught and we were over-powered. Letting the #2 fly, we ran off, down the wind-against-tide chop. With some repairs to my SSG, I was on my way.
The rest was easy. Good air behind us all the way – 800nm on one tack. The biggest issue was trying to get the rented Sat-phone to text my position to those back home. But even that I got sorted. At exactly the 800nm mark I gybed and completed the run to Port Vila on the same tack.
The last day, wanting to get into port in good daylight, I put the pedal down. To help things along I had a spell at the helm and got her to 12.8 knots! Then I shot below for a sleep and returned to find I had been trumped: the SSG had gone to 13.2! We covered 164nm in 24 hours, not bad for 27 feet of waterline. 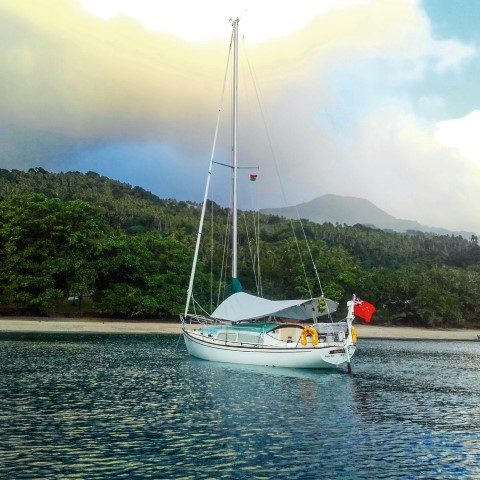 Jenny, my wife, flew in a day or so later and we had the time of our lives. We found secluded anchorages that weren’t even in the cruising guides. A simply unforgettable four months. Our daughter came up for a week to enjoy the fun. It was absolutely worth all the dreaming and work.
After checking out the active volcano and getting to know a lot of the locals really well, Jenny flew home on November 9. While dropping her off at the airport on Tanna Island, I cleared Customs and Immigration, with no fees to pay, and prepped for my voyage home.
Waimanu set sail at dawn on the 12th. It was overcast and a bit snotty but very doable. The skies cleared but the wind increased. Over the next few days I had to reef down more and more. She was going so well! The second day out I managed to make myself a really nice omelette. It would be the only cooked meal in nearly a week. A bit rough and with little motivation to cook, the peanut butter jar slowly emptied.
I discovered water over the cabin sole late on the first day. That night I found there was a lot of diesel in it. I bailed every 20 minutes throughout the night. The fuel tank had definitely ruptured. I calculated the ingress to be about 25 litres per hour – not good. Everything got slippery and stank of diesel.
The water was still coming in, so I charted a course for Noumea. I spent a good chunk of the day moving gear and lifting floorboards. The diesel had gone but the water was still coming in. Then Eureka! I found it. Right up by the forward bulkhead a squirt like a little boy taking a pee; evidently a plugged cable hole from an old transducer from years and years ago.
I made a new tiny wooden plug and tapped it in: problem solved. During the night I spoke with a ship and threw a 12-inch flying fish out of the cockpit. At 0415 the SSG had a fit. A gudgeon had parted. I spent an hour or two taking the thing apart, rebuilding it and getting it going again perfectly.
The main was well-reefed and the #3 headsail had several rolls. I spent time below, out of the howling wind, and listened to podcasts. Later that night I spotted a ship and shone a bright torch on the mainsail. The wind moderated just after dawn and I made some muesli. Only hours later we had 10 rolls in the main and only the storm jib up forward. I figured if the wind got up too much more we would deploy the series drogue like I had in a 70kn blow in the Tasman.
At near 0400 on day 6 we fell off yet another big wave – the fifth that night. The downside of a SSG is that it can’t see the waves and so every now and then we would fall into the hole at the back of the wave. It can be very unnerving; a sudden jolt and heavy crash.
I got up and saw a ship off to port out of the saloon window. I put on my leggings and started to get my harness on as we dropped off yet another big one. Crash! I got into the cockpit and the boom was at my left shoulder: that’s odd. Then I saw why. The mast had gone!
The cap shroud chainplate bolts must have sheared clean off. Clipping onto the jackstay, I crawled along the starboard deck and saw a gaping hole in the deck. The lower shroud had catapulted its support block right through the deck. 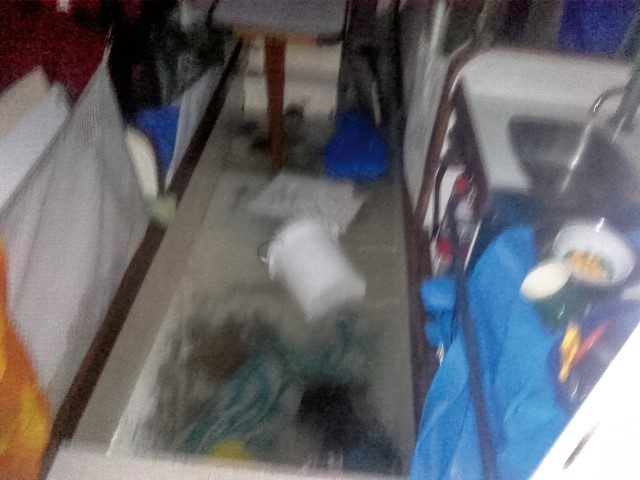 “I can manage this,” I said, “it’s doable. Winch the mast clear, cut the rigging away and screw a panel over the deck hole.” But when I got back to the cockpit the real trouble started. The cabin sole was under water.
I went for the VHF and put out a Mayday three times, totally forgetting the aerial was underwater. The unit showed ‘Low Power’ so I went for the handheld in the grab-bag. No lights. It was flat. I let off two red parachute flares into over 40 knots of wind – would they be seen? I tried the bilge pump –no change in the level.
The adrenaline was pumping. I stopped myself and said: “If you let emotion take control, this won’t end well.” I told myself to think logically, rationally and cohesively. I remember using those words. I decided not to panic or be frightened or give in. Then I methodically got the liferaft ready and the grab-bag.
I deployed the raft in case I might need it. Opening the grab-bag I activated the EPIRB, and threw it into the raft. Then I went for anything aboard that I thought I might need. Food, Drink, Comfort was my focus. In went tins of food, bottled water, ship’s papers, wallet, passport, binoculars, winter clothes, bedding and pillows, first aid kits. I figured on three-to-five days adrift.
When the water was well over the bunk-boards I got to the port quarter. I checked that the raft’s drogue line was clear of the SSG, and in one fluid movement I left the yacht and tumbled into the liferaft and cut the tether.
We drifted free. I grabbed the plastic box, got my phone out, put it to camera mode and turned to get Waimanu in her final moments. There was nothing. She had gone. 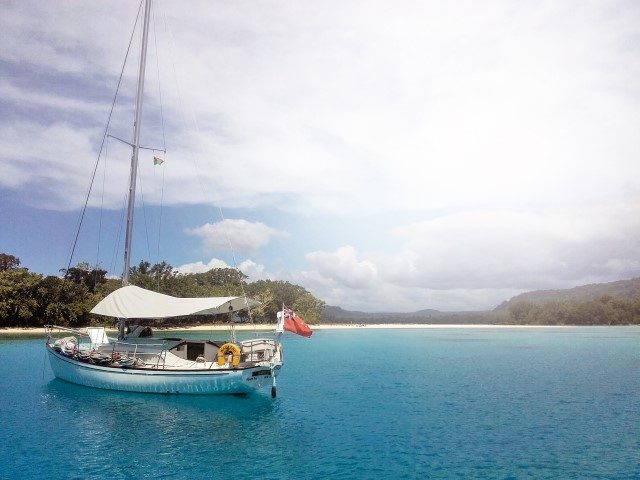 Sorting my gear out, I took a seasick tablet. I didn’t feel the least bit ill, but the training says you should take one as a liferaft’s motion is different and it can have a peculiar smell. I took a good drink – I was really thirsty.
After some nut bars I settled down for a long wait. I tried to sleep but couldn’t so I tried reading – that just made me dizzy. The seas were atrocious. We slid down big walls of water, the drogue grabbing and snatching to keep the raft from being tumbled. 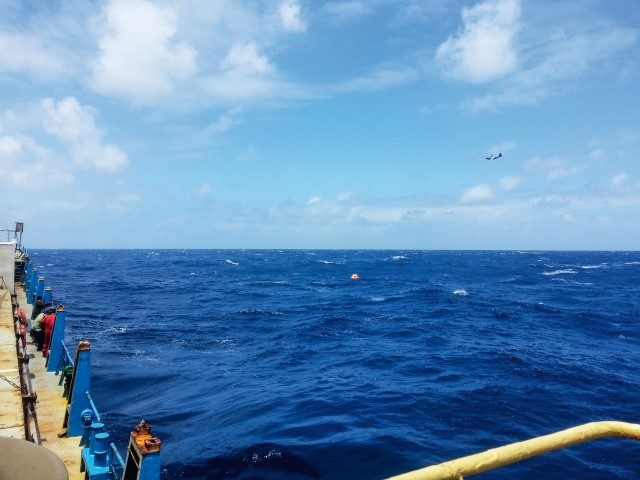 The huge breaking seas collided with the tiny raft and spume, spray and solid water went right over the canopy, shooting water into every vent. The canopy was droning and humming in the wind. One drone seemed insistent. I looked out. A great big Hercules aircraft went over. Wow! That was quick! What a relief, at least someone knew where I was. It kept circling. I leaned out and waved, giving them the thumbs up. I put in earplugs. I’d been in the raft about five hours.
A bit over three hours later the Herc dropped a smoke flare. A ship must be nearby. When I spotted her she looked tiny. She was rolling in the big sea and I thought she was a small local fishing boat. She was, in fact, a decent-sized freighter!
As she loomed near she slowed and headed up into the weather, the bow bulb heaving clean out of the ocean and plunging back down, burying the bow under plumes of foam. Then the ship’s prop would come out of the water as the waves passed under her stern – chuff, chuff, chuff – throwing water everywhere. I didn’t like it. 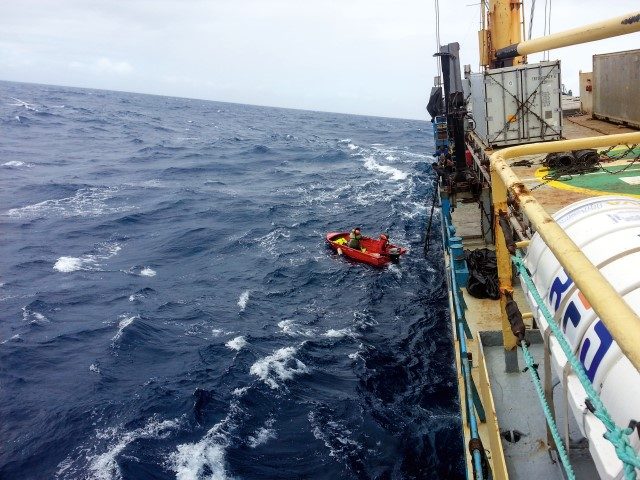 When they got close I yelled: “Use the rescue boat!” They yelled back: “It’s too rough!” There was no way I was going from raft to ship; if they didn’t get me with the bow, I’d be mincemeat in the prop. After a while a little red tinny came around the stern of the monster and made its way toward me. I’d never seen Tongans so pale!
I threw them a rope and pulled myself toward them. Once my bags were in, I followed. I hung onto the raft rope but we decided it would be too hard to save. Sadly I let the rope slip from my fingers and it drifted away. Getting aboard the ship wasn’t easy but once I was committed I went up that rope ladder like a rat up a drainpipe. I was safe.
The rest is, as they say, history.
LESSONS LEARNT
Gear – Spend the money and get the right gear. Save your life as comfortably as you can. I thought carefully about what went into the life-raft: Food, Drink, and Comfort. My Grab-Bag had more ‘goodies’ than just the recommended.
Think – Don’t think ‘this won’t happen to me’. Positive mental attitude will save you; practice being positive in any circumstance. Think through procedures for different emergencies. If you have crew, write out the procedures together. ‘If this happens, I do this’: essential for solo sailing. Good sailing isn’t not being afraid; it’s being prepared.
Train –Get physically involved: way more powerful than reading instructions or being lectured at. I had never seen a liferaft inflate, or been in one until the very intensive liferaft training with SeaWise. By the end of the day we swam to the raft and did everything while totally blind-folded. Response comes from training; reaction comes from emotion.
What will you do if something goes wrong?
– Think about it NOW.
What important gear do you need? – It WILL save your life.
Have you actually practiced what you need to do?
– You won’t remember theory.

Birds in the bilges