The moment they arrived in March 1934 George Dibbern and Te Rapunga were good news in Auckland. George seemed to be a new face of Germany; not the comic burly Hun of the wartime cartoons, but a lean, fit, liberal man of the world, a symbol of freedom, giving Old Man Depression a kick in the face. Sadly, the true new face of Germany was what he was fleeing, Adolf Hitler and the Nazis.

George had developed an engaging speaking style in talks to yacht clubs in California and Hawaii. In New Zealand he became in great demand as a speaker. While Akarana Yacht Club had adopted Te Rapunga, every yacht club had George in turns to speak. The boys and girls of the Herne Bay Junior Yacht Club and Wakatere Boating Club loved him. He gave a talk on radio station 1YA at prime time, 9pm, competing with the wildly popular soap opera One Man’s Family on 1ZB. He judged the New Zealand German Sheepdog Club’s show on the German working dog standard rather than the Alsatian “show dog” standard – to much approval.

In a first flush of enthusiasm George had tentatively entered Te Rapunga in the Trans-Tasman race that Akarana was organising for the Victorian Centennial Regatta for a December 8 start. The prizemoney of £300 for the Auckland-Melbourne race was irresistible. The course was 1630 miles from Auckland to the St Kilda Yacht Club’s jetty at Melbourne. 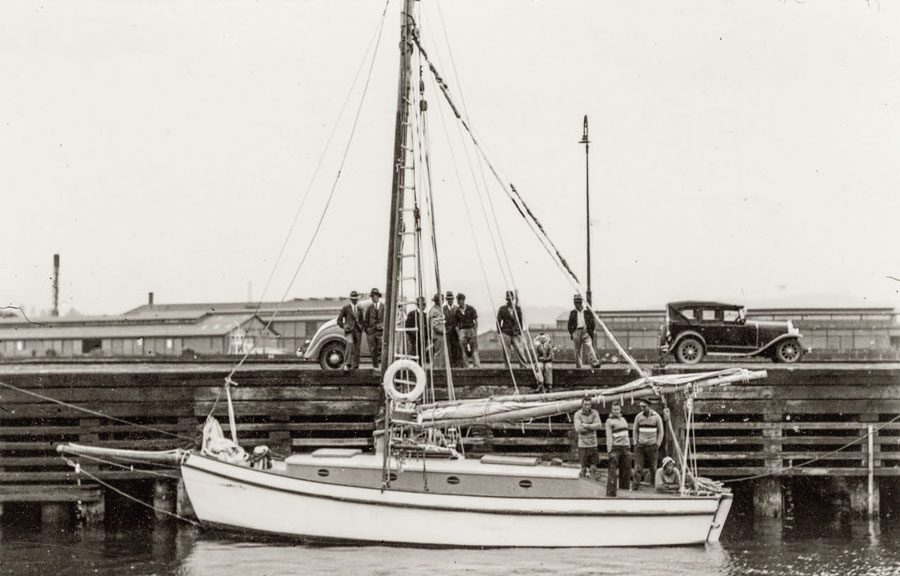 Te Rapunga (above) and Ngataki at the start of the Trans- Tasman race.

Te Rapunga took part in the Akarana race to Coromandel at Easter and its last race of the season to Kawau on April 21. George then hauled the yacht out at Devonport for the winter and went south by bus to Napier with his cousin Gunter Schramm to stay with his old friend Hugo Hildebrandt. He had now received a letter from his wife Elisabeth in Germany telling him that, despite the radical changes in Germany, she could not leave her homeland to come to live in New Zealand. She gave him her blessing to disregard her and the children in his quest for himself.

He had found New Zealand changed too. It was just over three years since the Napier earthquake; Mother Rangi and his other Maori friends in Dannevirke were dead or had moved on; he was himself deeply changed by his last four years at sea.

He bussed back to Auckland in late September. He found that the prizemoney for the Trans-Tasman race had been reduced to £100, scarcely enough to justify fitting out and provisioning for the trip to Melbourne and back. Until then, the possible entries had been Te Rapunga, Johnny Wray’s Ngataki, the Auckland schooners Morewa and Vision, the Wellington yachts Seaward and Queen Charlotte, the Sydney yachts Utikeah and Spumedrift and the Melbourne yacht Oimara, with the possibility of the Suva yacht Seafarer, provisionally entered by Tamaki Yacht Club. 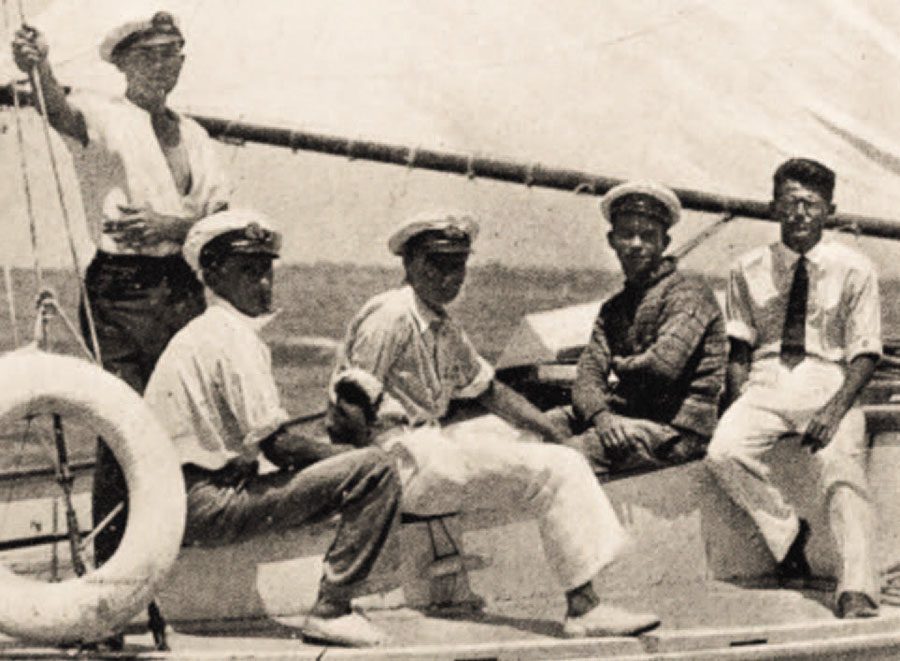 Seafarer and crew from Suva.

Johnny Wray and his Ngataki were already legendary in Auckland. A massively-built hard chine 34ft cutter that Wray had designed and built from largely scrounged materials and launched in 1933, Ngataki had kick-started New Zealanders’ obsession with off-shore sailing in home-built yachts in the short time she had been in the water.

Vision had earned her spurs offshore. A husky 45ft schooner, boatbuilder James Reid built her at his yard in Sulphur Beach Northcote in 1920 for the purpose of cruising the Pacific with his family, a journey that occupied two years from July 1924. In 1934, Cdr H.M. Montague RN bought her for a winter trip to the Australian coast and eventually onwards to England, but with the possibility of returning to Auckland for the race.

Morewa was already a yacht under a cloud. Colin Wild had launched her in June 1933 from his Ngataringa Bay yard for J.W.S. McArthur, a bond entrepreneur. She was an 80-ton, 75ft staysail schooner, the biggest and most lavish yacht built in Auckland since Chas Bailey Jr built La Carabine for Sir Rupert Clarke of Melbourne in 1903. McArthur was currently engaged in a bitter struggle against the so-called ‘Kelly Gang’, a cabal of Auckland business leaders he alleged were trying to close him down. In preparation for the race he had Morewa hauled out in July to have her stern extended by 5 feet, the fitting of a 10ft bowsprit and major rig alterations. He intended to win. 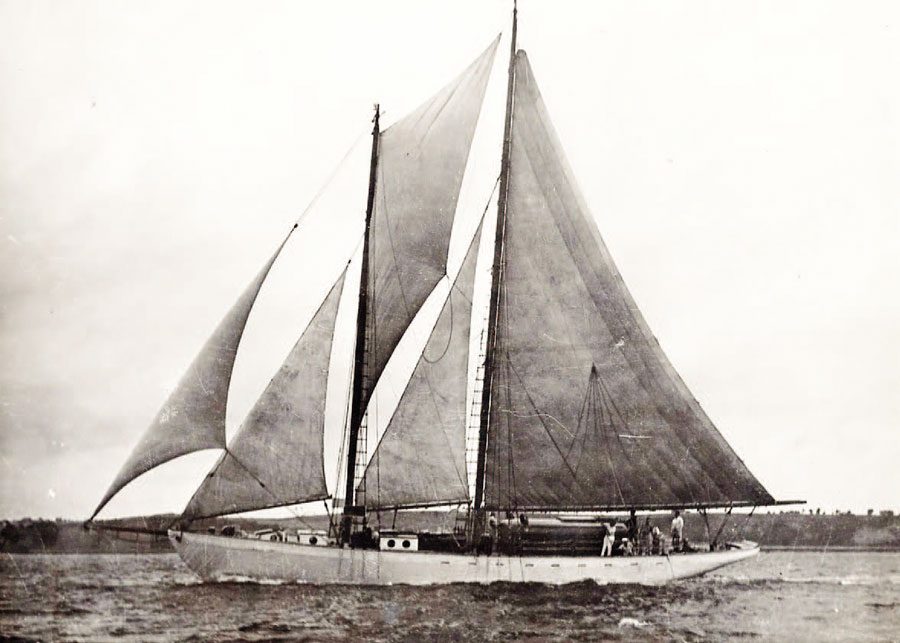 Morewa under her new rig.

Capt. Watchlin was contemplating entering his recentlybought 47ft J.M. Watts-designed schooner Queen Charlotte built in 1926 by E.R. Lane of Picton. Other possible entrants were the ketch Seaward, formerly the launch Ariadne rebuilt at Picton as an offshore cruiser and three supposed ‘schooners’ being built at Auckland, one of which turned out to be the Logan-designed Couldrey-built racing cutter Little Jim, the second a 45-footer being built by Cox & Filmer at Judges Bay for N. D. Noakes, which never progressed, and the third by Bert Woollacott of Devonport, which may have become his Rambler in 1935.

Of the Australian yachts, F. J. Bennell’s ketch Oimara from St. Kilda had excellent offshore credentials. She had won the Bass Strait race in 1930 and raced Teddy and Rangi from Auckland to Sydney in March 1931, taking line honours. Of the Sydney schooners, Utikeah was an unknown quantity but Spumedrift had recently been to Lord Howe Island. None of these three eventually entered. Seafarer was a Suva-based 34ft Seabird-type yawl from the plans of Harry Pidgeon’s Islander and had already visited New Zealand in January-February 1933. 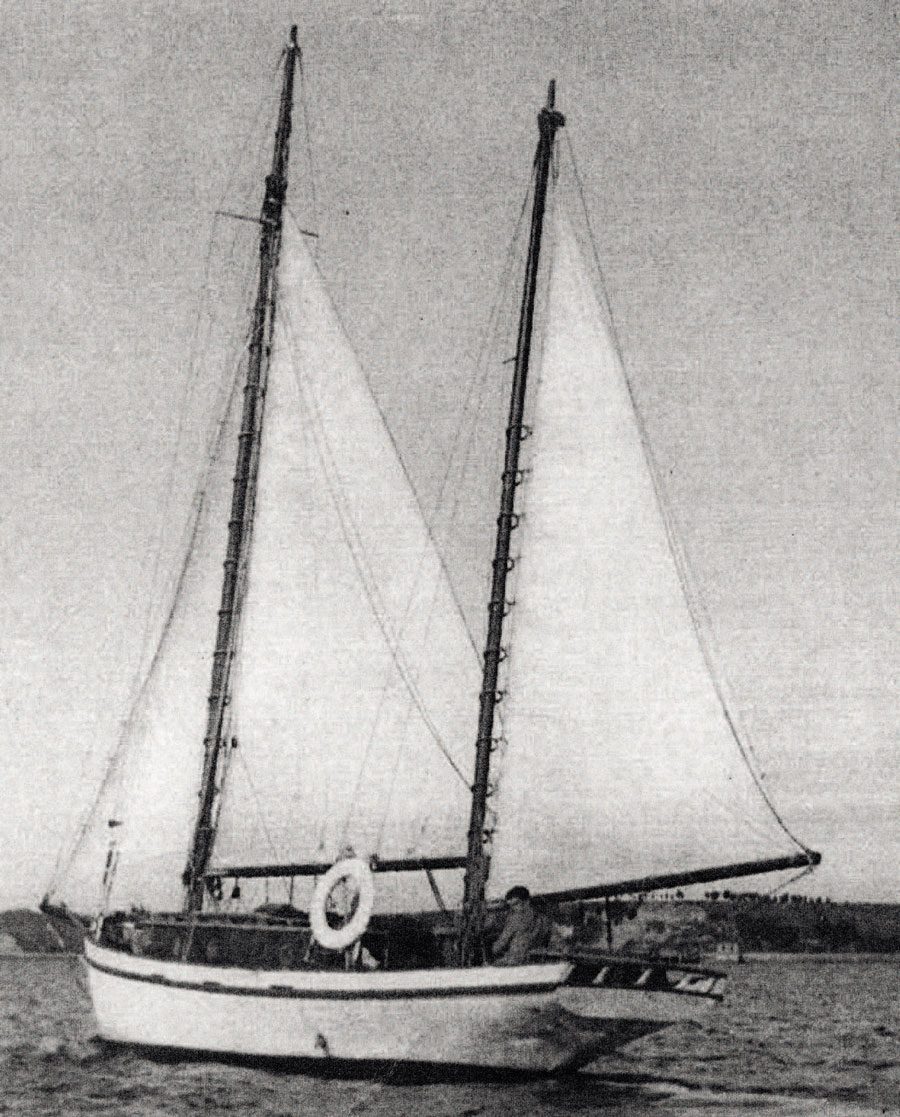 George relaunched Te Rapunga in October and sailed her to Napier with a scratch crew. She called at Gisborne, then on to Napier where he showed his yacht to his old Hawkes Bay friends. He did his usual broadcast talk on the local radio. A young Napier woman, Eileen Morris, listened with growing fascination. She visited Te Rapunga at the port. George offered her a trip to Gisborne on the return journey to Auckland but Eileen reluctantly refused, knowing it would be fatal to her small-town reputation. But, as we shall see, later events made this relationship become all-consuming for Eileen and scandalised the ladies of New Zealand (including my dear mother).

In mid-November, five entries remained, Te Rapunga, Ngataki, Queen Charlotte, Seafarer and Morewa. Ngataki was on her way from Tonga and Seafarer from Suva. Vision was not coming back from the Great Barrier Reef. Seaward arrived from Wellington in July but could not scrape up a crew, and funds were short. Seafarer arrived from Suva on November 19, but scratched her entry. The crew had other plans; in fact the skipper, G. Langdale, had blood poisoning in his right leg, which was amputated below the knee in Auckland. Then Queen Charlotte’s entry was withdrawn, leaving three entrants. 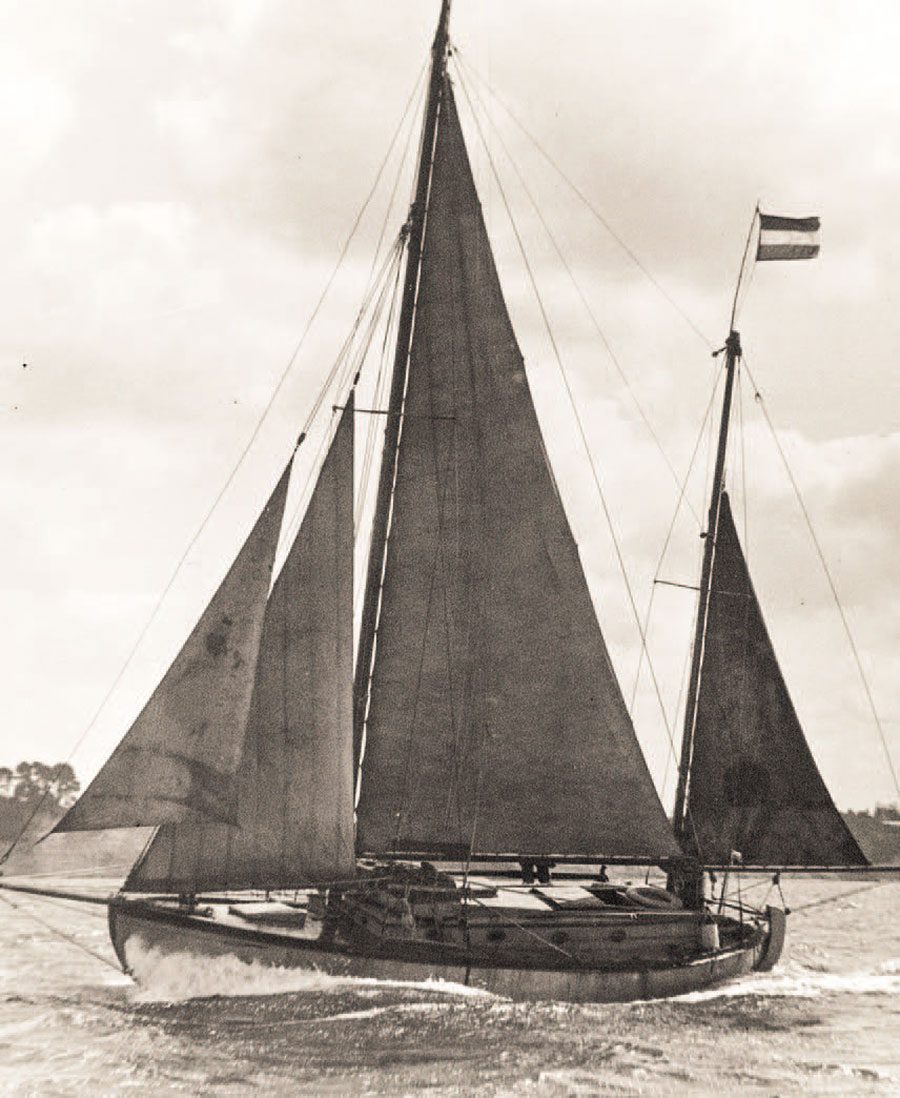 Te Rapunga off the North Shore

Morewa had a problem. Her new rig required new sails. John Burns of Fort Street had the job but the sailcloth, of the type used on Tommy Sopwith’s America’s Cup contender Endeavour (refitted 10 years ago in Auckland) was not due to arrive from England until December 5, leaving no time to make the sails before the December 8 start. Horrie Hewson of John Burns pleaded with Akarana Yacht Club to postpone the start until December 22, but to no avail. Dibbern and Wray’s brother Geoff objected and said their craft were ready to start.

So, after all, it was now down to just two starters, Te Rapunga and Ngataki. Both yachts took part in an Akarana cruising race to Awaroa Bay on November 31 and the crews helped one another with preparations for departure. Te Rapunga came out at Devonport for a final clean. George was dismayed to find that the muntz metal sheathing had broken down and stood out like fins from the hull. Gunter had the job of stripping it all off between tides, leaving no time to fill the nail holes.

George had a good crew, Gunter and experienced yachtsman Fred Norris from Devonport, who was later to build the Woollacott Nada and enter the 1951 Trans-Tasman with his 30ft Woollacott Hope. Then there was the landlubber journalist Austin Vaile who was swept up in the Dibbern mystique and insinuated himself (and his cash). Fortunately, at the last moment, another experienced yachtsman, Noel Tattersfield, presented himself to George and bluntly stated he was coming with them. Noel was part-owner of the C Class keel yacht Janet with his brother Guy.

The start on December 8 off Akarana’s clubhouse in Mechanics Bay was a fine sight. George Dibbern and Johnny Wray and their boats were very well-matched in the men’s characters and in their yachts’ performance at sea. On the assumption that Morewa was going to start, she had been put on scratch. Te Rapunga had a handicap allowance of seven days while Ngataki had only 17 hours more. 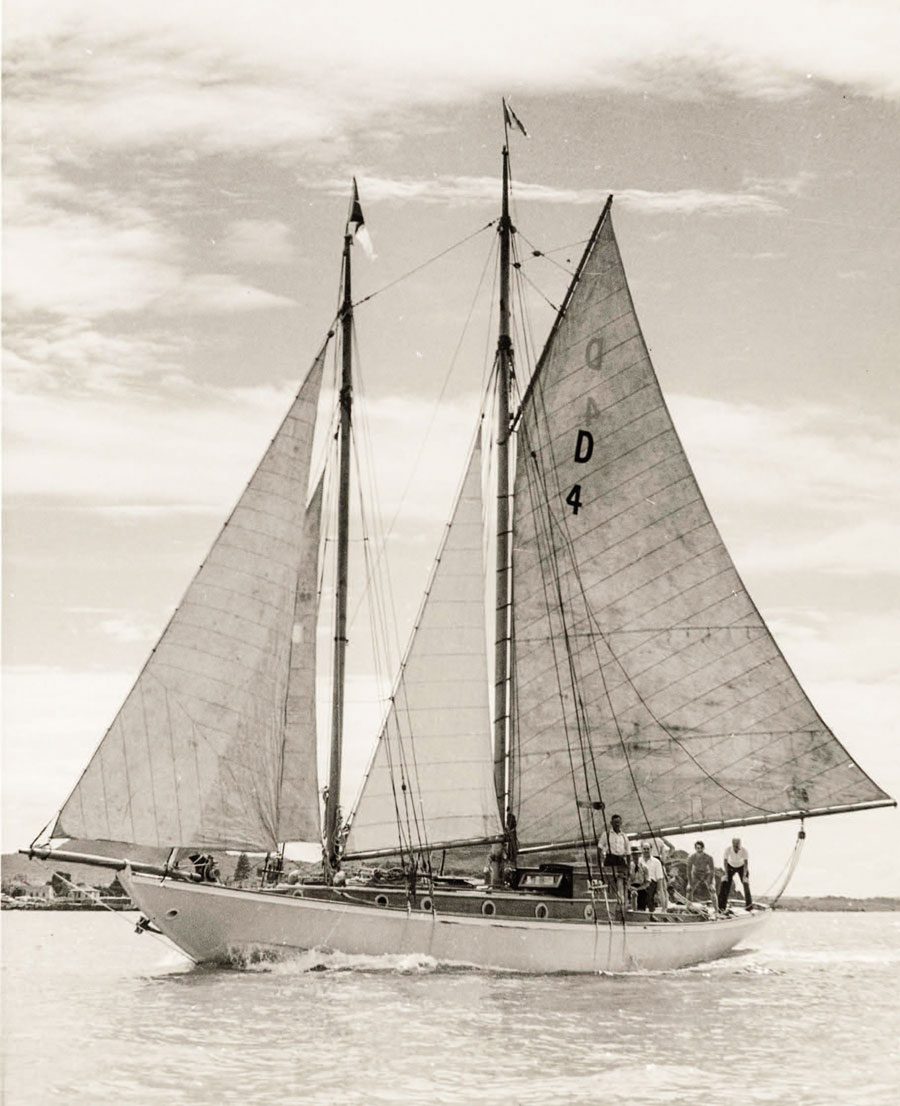 There was hardly any standing room around the foreshore. A large number of yachts and launches were out to see them off despite the conditions, a strong easterly with a short choppy sea. The Harbourmaster fired the start gun at 2.46pm. Both yachts were revelling in the conditions. At North Head, with 1630 miles to sail, Te Rapunga, flying Akarana’s burgee, was half a mile ahead of Ngataki, flying the burgee of the Royal New Zealand Yacht Squadron. BNZ

[Erika Grundmann’s biography of George Dibbern, Dark Sun (David Ling 2004) is out of print, but Paul Denyer pauldenyer@xtra. co.nz has a number of copies available.]