A replica of the Auld Mug created from trash collected on Auckland’s East Coast Bays beaches will hopefully help to raise public awareness of the plastic scourge strangling our seas.

The Plastic Cup is work of Auckland artist Cate Dine, whose unusual medium-of-choice was triggered about eight years ago during her daily walks on nearby beaches.

“It was impossible to ignore the volume of plastic rubbish washing up. So I began picking it up – like a good, cleangreen Kiwi – but there’s only so much you can carry on a beach walk. Next day I brought a bag – first one, then two, then three.” 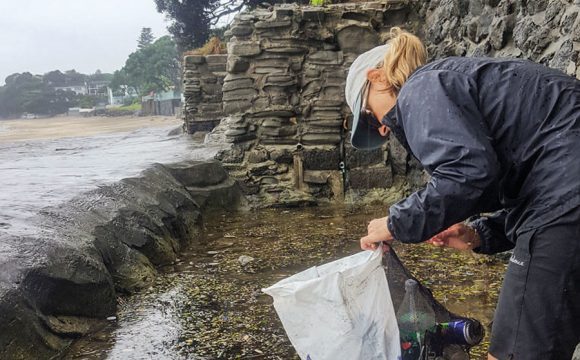 Sadly, there’s no shortage of raw materials for Cate’s creations.

Among it all were thousands of ‘nurdles’ – small pellets of plastic that are the raw product from which many plastic products are manufactured. “Using a little net I collected 14,000 one day – yes, I counted them – from a factory spill. It’s all graphic proof that everything discarded around suburban streets ends up in drains, in the sea and then on our beaches. The sea is the end-stop – the ultimate garbage bin.”

In 2014 she elected to document each of the 40,000 pieces of plastic she collected over the year – carefully laying out and and photographing each clean-up. “It created a database or benchmark for me. The exercise offered a fascinating insight into what types of things are being discarded. I honestly believe society doesn’t have a clue about what ends up on our coastline. Getting a grip on the detail could help with defining a strategy to fix the problem.”

Though her creativity had previously focused on painting, the variety of colours and shapes in the rubbish planted a seed in her mind – and it quickly germinated. “Rather than being just another sole agent in the pick-up-the-plastic movement, I thought using the rubbish to highlight the problem we face might be more effective.”

The process of creating her work is very fluid – “what I make depends on the shape, size, colour and number of the objects I find. It’s about having an idea and seeing if I can find plastic rubbish to build it – the end product is dictated by what I find.”

Fashioning the America’s Cup replica took about 10 weeks – and initially she didn’t have any idea what she would do with the bits of plastic. “It kind of evolved when the real America’s Cup was being raced on our Gulf at the time. I had collected all this plastic rubbish in the same Gulf. So there was an obvious contrast, an opposite-ends-of-the-spectrum kind of juxtaposition – and one that, for me, highlighted the problems in our oceans.” 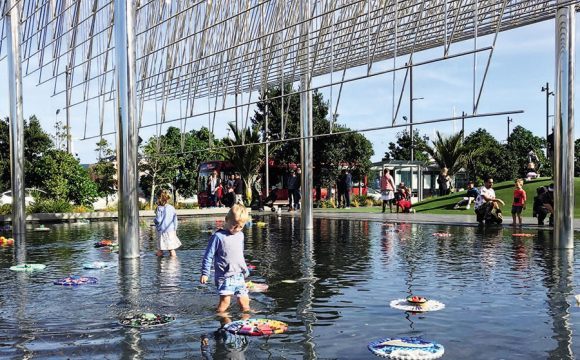 Featuring marine life such as fishes and whales – and bottle caps to reflect their precious element of water – the Plastic Cup took Cate more than 300 hours in construction time. People viewing the cup – and her other pieces – says Cate, will recognise objects from their daily lives and maybe think twice about how they dispose of things.

If we are to improve things, she adds, raising public awareness of the plastic problem is imperative. She likes to be proactive about displaying her message to the public, and recently launched a ‘fleet’ of 50 plastic hub caps into the pond at Auckland’s Wynyard Quarter.

Collected from suburban roads, each hub cap has been embellished with plastic objects – they look like water lilies. “The kids at the pond loved them – and the exercise generated lots of good conversations with members of the public.”

Ultimately, she is hopeful and believes New Zealand is more aware today of the plastic problem than it was say, 10 years ago. “We are making progress, but the message needs to go up the chain – not only to coorporations but also to government.”