Brigitte Bardot had one. So did Sophia Loren. As did Richard Burton, Peter Sellers, Prince Rainier and Aristotle Onassis. In fact, the gleaming mahogany vessels with their distinctive, flared bows, tumblehome hulls and unfettered V8 power became an icon for the planet’s glamour set in the 1960s and 70s. To be taken seriously on the Italian Riviera, you needed a really cool pair of sunnies – and a Riva.

Here on Auckland’s Waitemata Harbour, where things are a little less sunny and a tad cheaper, a Riva won’t necessarily underscore your status, but it will certainly turn heads. For the owner of this boat though, reflected status is not the driver for the project. He’s passionate about classic timber boats and has a particular appreciation for the magic that is a Riva Aquarama. She’s the fulfilment of a long-cherished dream.
The Aquarama was one of the marque’s most famous models – distinctive for its seating arrangement, twin V8 powerplants, sunbed loungers over the engine bay – and the cutaway on the stern deck to aid boarding from the quay. Though this one isn’t a precise replica, it’s pretty close. And, as I discovered, building an accurate replica of a global icon is a lot more complicated than you might imagine.
In the main, two craftsmen are responsible for her construction in an Auckland warehouse: Mark Robinson – boatbuilder, cabinet maker and specialist in custom furniture, and Steve Cranch, also a boatbuilder but, in this case, the engineering guru responsible for designing and creating the boat’s drive trains, period fittings and systems.
With this build, both are in familiar territory: Robinson has a lengthy track record in traditional boatbuilding; Cranch is chairman of the Traditional Boatbuilding School and past-chairman of the Classic Yacht Association. Their paths have crossed many times over the decades. Their efforts are being coordinated by Greg Yeo – project manager, relentless task master, keeper of the purse strings and offerer of unsolicited advice.
For Robinson, the project’s dished up daunting challenges. “It is without question the most difficult boat I’ve ever built. It’s beyond comprehension – and when you consider that there isn’t a single straight line in the design, and that there are 23 frames along an eight-metre hull, you can see why. Those curves are eye-catching and beautiful, but Lord, shaping them was a real pain in the proverbial.” 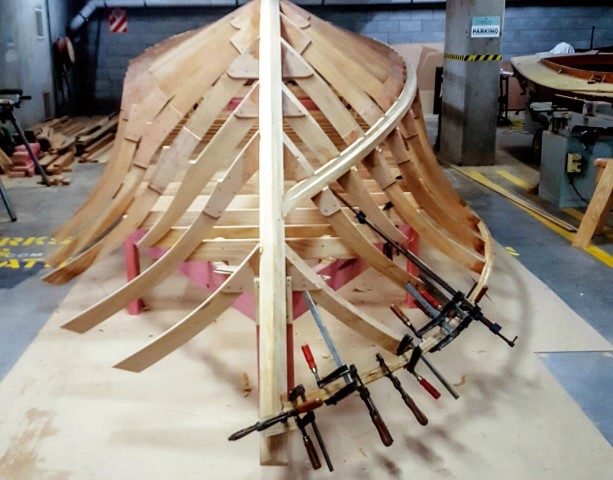 He began by sourcing a small-scale set of plans for the Aquarama (similar to those used by model builders) and lofting them to full size. Malaysian kauri – from Auckland’s BBS Timbers – has been his wood of choice for much of the hull’s structure.
“It’s a good, light timber, well-priced, readily available and I know it well. I’ve used it for the 23 frames, the backbone, gunwales and supports (there are no stringers). The hull itself is formed from three layers of mahogany ply – two diagonals against the frames, covered by a 6mm fore-and-aft outer layer. Two layers of 6mm ply form the bottom. Setting it up was easier with the boat being built upside down. It’s all held together by a WestSystem epoxy glue.”
The Italian heritage notwithstanding, Robinson says this Riva also boasts a little ‘kiwiana’. “I’ve used kauri scrounged from a demolition site for the engine beds and interior/cockpit structure. The inlay on the decks is also kauri.” The Riva’s legendary brightwork will be courtesy of multiple layers of AWLwood varnish. 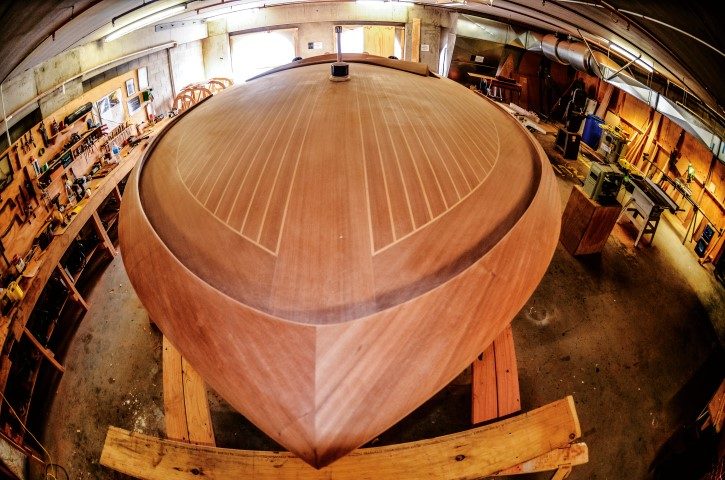 Engineering
Perversely, the challenges for Cranch have been even more demanding.
“While the boat isn’t an exact Riva replica, we’ve tried – as much as possible – to maintain the ‘flavour’. But there aren’t any international stores with ready-made Riva fittings and accessories. So in some cases I’ve had to source ‘lookalike’ components – such as gauges – from various places, trying to find something that closely ‘matches’ the model’s original instruments.
“The steering wheel, for example, will come from a ’65 Ford Galaxy – it’s the closest thing I could find to the original Riva’s. I’ve spent countless hours trawling through the internet, poring over photos of Rivas.”
But for the most part Cranch has been forced to make fittings and accessories from scratch – and fortunately, he’s had plenty of experience in doing so. It involves making wooden patterns for the cleats, air vents and navigation lights and delivering these to Auckland’s Mike Rees Castings. The finished bronze fittings will be chromed. “I like to call this a ‘bespoke’ project – because just about everything on this boat is custom-made.” 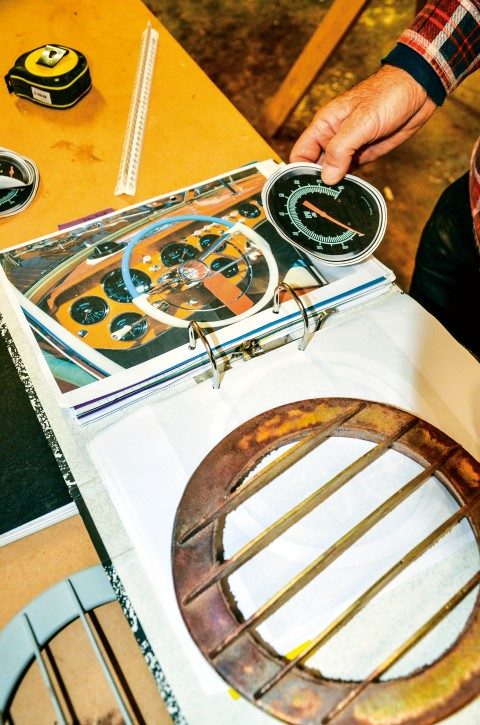 Cranch is also responsible for the boat’s power train. She is being fitted with twin 420hp LS3 V8 Corvette engines, coupled to ZF gearboxes. While shafts and props are easy to source locally, the Riva’s traditionally diminutive rudders (you don’t need big rudders at 40 knots!) and shaft-supports will also be cast at the foundry.
The LS3s are fuel-injected engines and will be fed from four tanks (two forward, two aft) holding around 700 litres of petrol.
The anchor is a little unusual as Riva’s go. Where the original models used anchors that were deployed by hand, this one has a neat aperture in the bow to receive the curved, custom-designed anchor (fabricated stainless steel and polished), with the rode fed to a below-deck windlass.
Robinson and Cranch estimate the boat will weigh about 2.5 tonnes when complete. At 2.6m wide, she is road-legal and will ride on a custom-built trailer equipped with a Balex system.
The challenges notwithstanding, Robinson and Cranch have both enjoyed the project enormously, relishing the use of traditional skills such as pattern-making and custom boatbuilding – where possessing an accurate, appreciative ‘eye’ and a sense of ‘detail’ are requisite assets.
Rivas are often described as ‘moving sculptures in wood, chrome and glass’ – and I don’t think this lady will disappoint. About 18 months into the build – she’s scheduled for completion by Christmas.
Can’t wait to be seduced. 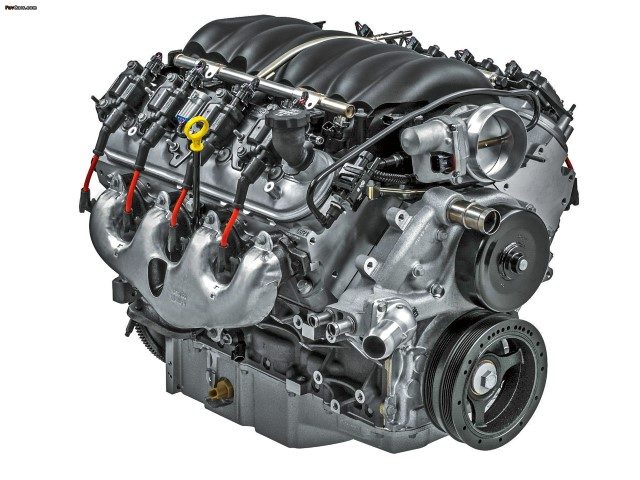 Queen of the Rivas
This boat is modelled on the Aquarama – the most famous of Carlo Riva’s designs and the undisputed flagship of the beauties that rolled from his factory. She followed an extensive line-up of smaller models. They included the:
Corsaro (1946 – 1955)
Tritone (1950 – 1966)
Ariston (1950 – 1974)
Scoiattolo (1950 – 1957)
Sebino (1952 – 1957)
Florida (1952 – 1969)
Aquarama (1962 – 1996)
Around 769 Aquaramas were built after the model debuted (November 1962) at the third Milan International Boat Show. The widescreen ‘cinerama’ movie format, popular in the early 1960s, is commonly-acknowledged as the source of the ‘Aquarama’ name – most noticeably reflected in the boat’s wide, distinctive windscreen.
But the Riva legend actually dates back to 1842, with Pietro Riva building boats at Sarnico, a small town on the shores of Italy’s Lago d’Iseo. The company passed on to his grandson, Serafino, and then, in the 1950s, to Serafino’s son Carlo. Carlo was the master magician.
Sadly, it all came to an end in the early 1970s when various factors conspired against Carlo’s artistic sensibilities – chief among them rampant unionisation in Italy, the availability/sustainability of the high-quality timber and the advent of fibreglass, which was the final death knell.