The oldest – and possibly the corniest – adage about the America’s Cup has it that “the fastest boat always wins.” All three challengers are in blistering form – is ETNZ’s Te Rehutai quick enough to stay ahead? By Lawrence Schaffler.

Like most observers, my familiarity with hydrodynamics and aerodynamics extends to being able to spell them correctly. For me, this 36th America’s Cup – with its radical AC75 foiling monohulls – blends the two disciplines more tightly than ever before in the event’s 170-year history. The regatta, according to everyone from armchair experts to the world’s foremost naval architects, might be more about ‘flying’ than ‘sailing’. 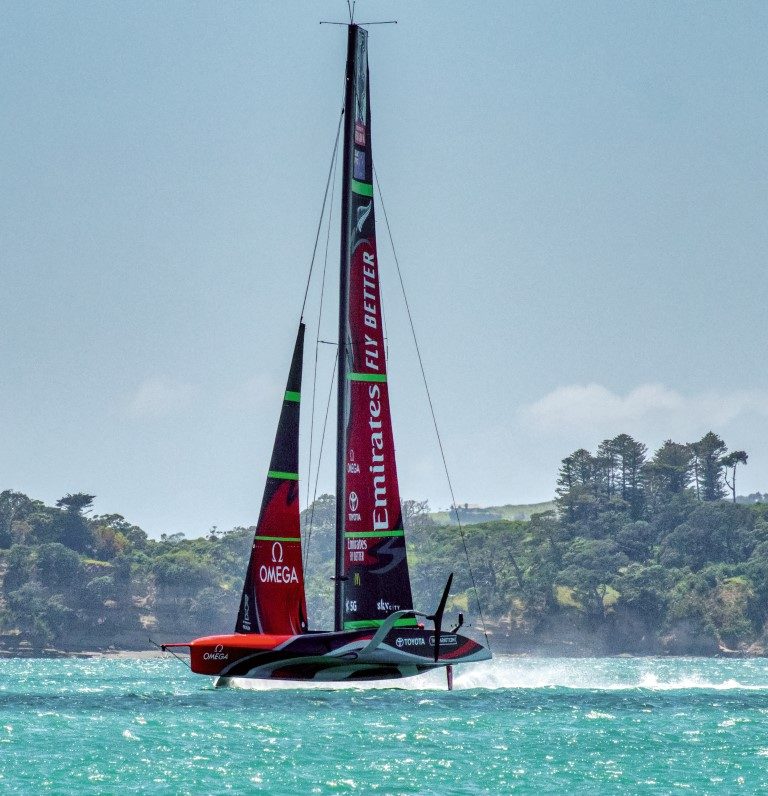 That assessment was reinforced with Te Rehutai’s launch in mid-November. A significant design leap from her predecessor Te Aihe (which was already pretty damn quick) ETNZ’s new boat has drawn wide acclaim for her unusual, aggressive lines. And the commentary/analysis revolves as much about her shape/ form above the water as the bits below.

You’d be forgiven for being a little confused about what the pundits are calling the ‘bustle’ – the bulbous belly shape under the hulls. It’s commonly accepted that the boat able to stay on her foils – especially during tacks and gybes – is likely to win. Dry laps are key – just as they were with the cats in Bermuda. If the bustle isn’t meant to touch the water, why is its shape so important? 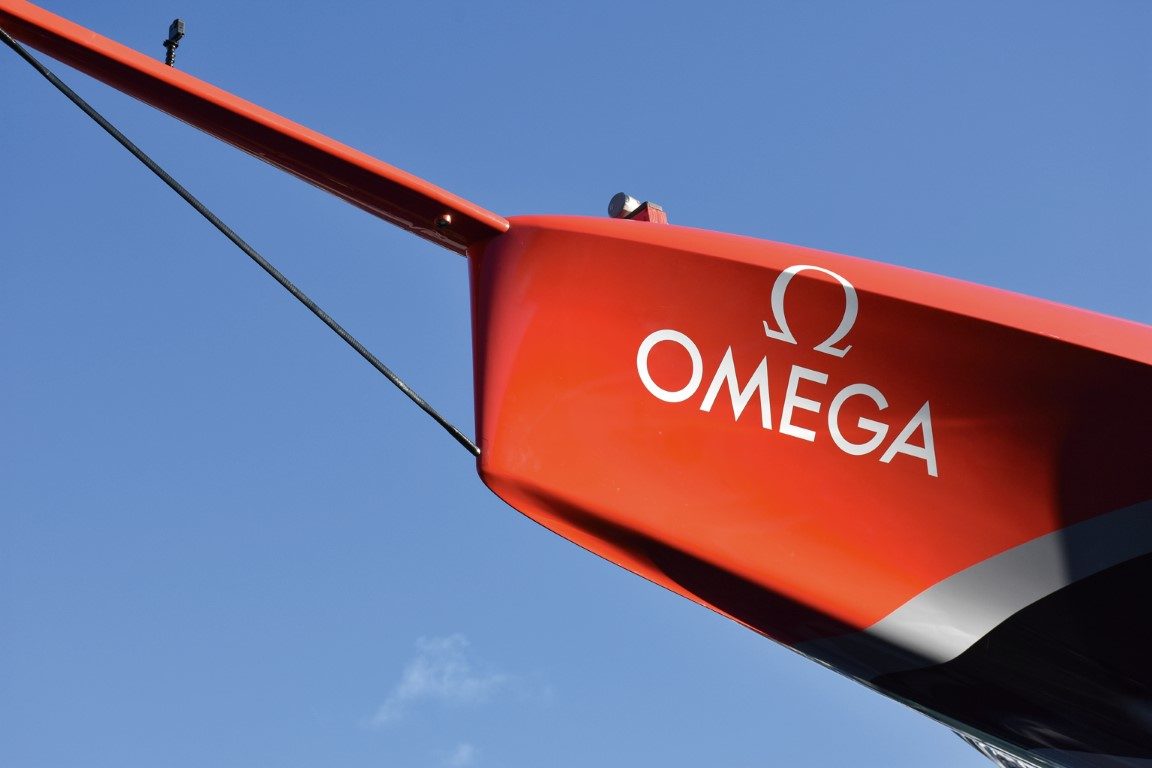 Well, it seems the bustle (and its shape/volume varies considerably across the four contenders) is useful during the ‘transition’ period, as the boats rise from the water and on to their foils. Compared with a conventional hull there is less wetted surface (drag) with the smaller bustle, so it’s easier for the boat to overcome resistance during transitions, especially in light airs. Many have commented on how quickly Te Rehutai gets on to her foils in light airs. 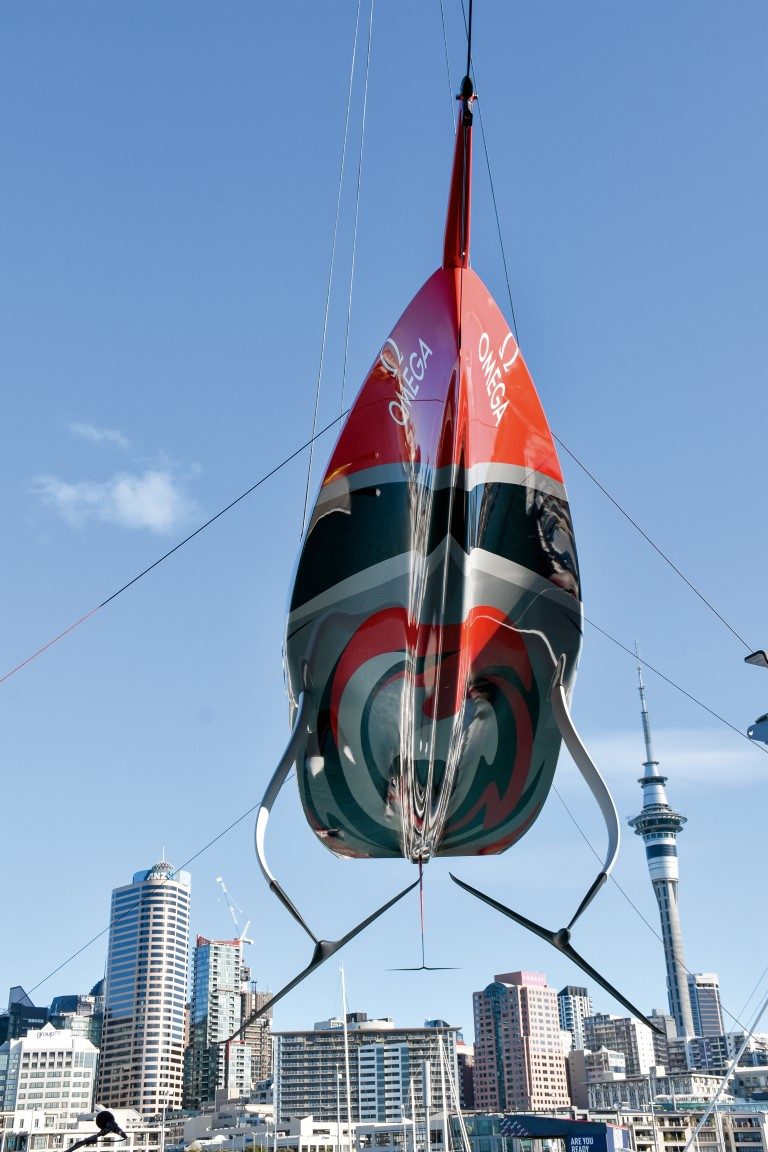 The bustle also offers less resistance after the inevitable ‘touch-downs’ (following less-than-perfect tacks and gybes) – so the boats will be able to recover more quickly.

But it seems having the hull flying too high above the water isn’t ideal either. The bustle should be as close to the water as possible, without actually touching it. This is about aerodynamics. By way of analogy, consider the spoilers/skirts on NASCAR racers. Too much air flow under the vehicle isn’t good for stability and performance. Many have commented on how low Te Rehutai flies above the water.

The accent on clean air flow is also noticeable in the changes introduced with Te Rehutai’s deck – again, a substantial shift from Te Aihe. To me her profile is strikingly similar to that of Donald Campbell’s jet-powered Blue Bird in which he set a land-speed record in 1964. All smooth, sweeping curves. Very slippery.

Where the grinders on Te Aihe were more exposed to air flow, they now nestle in deeper ‘cockpits’ on either side – and they stay there throughout the race. No burly grinders presenting a wall of air resistance during tacks and gybes.

Also interesting is how the foot of the boat’s double-skin mainsail ‘hugs’ the aft deck’s sweeping profile – there isn’t really a ‘boom’ in the conventional sense. I can only guess at the aerodynamic impact of this design feature. Smoother air flow, less turbulence?

It’s hard to believe that the entire vessel flies along at speeds approaching 50 knots, delicately balanced on such tiny appendages. It’s even more astounding to consider the variables in the designs. The rules limit the boats to trialling six sets of foils (and weight limitations are a factor). Each set is a complex, high-precision piece of wizardry in its own right – deciding which to use in the actual racing sounds a bit like buying a Lotto ticket. 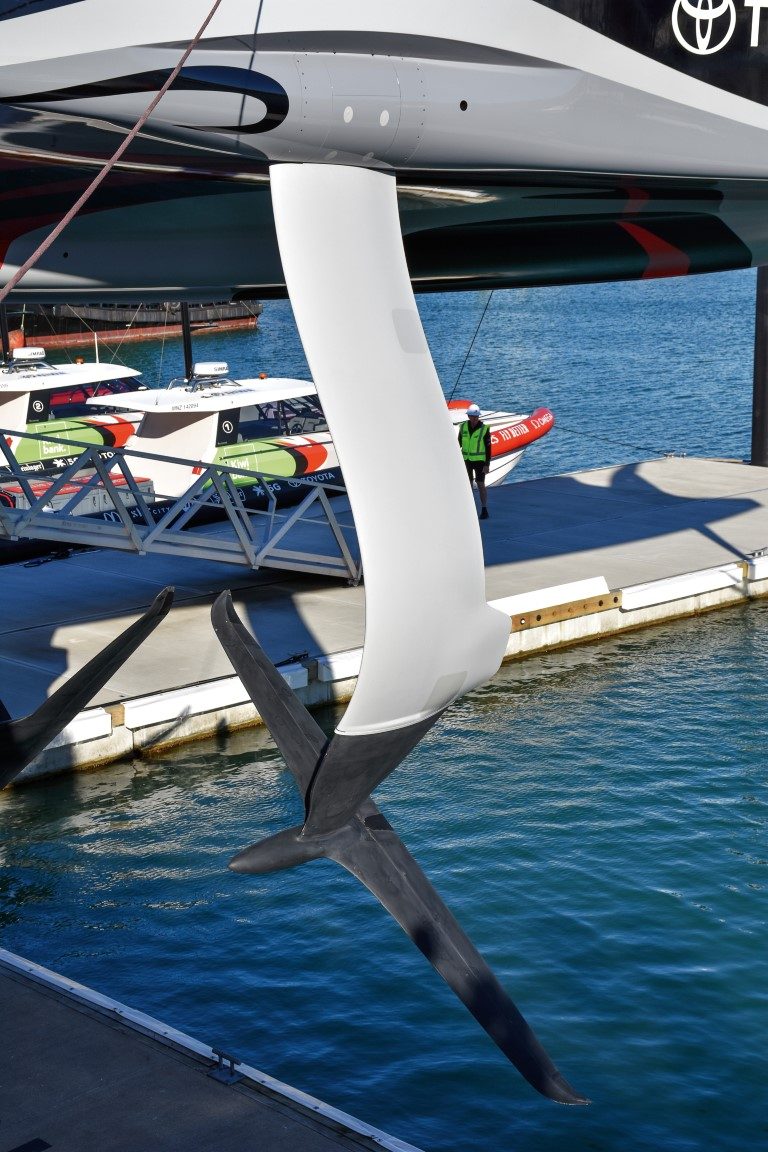 A thinner, flatter foil profile (smaller wetted area) has the opposite effect – slower take-offs but faster foiling. Such foils might also compromise a boat’s ability to quickly get back flying after a mistake (touch-down). Off course, the wind/sea condition on the day will have its own, additional influence, so making an informed guess about which foils will be used is going to be quite important…

Similarly, the rudder’s design and size have implications ridiculously disproportionate – in my view – to so slight and slender an appendage. A smaller rudder reduces drag (bizarrely, most it is out of the water) but potentially at the expense of control – especially during high-speed tacks and gybes.

This is sailing, Jim, but not as we know it.

We’ve been observing all four boats over the past months and it’s fair to say they all look super-slick. Based on what we’ve seen, predicting a winner is far from obvious. The World Series pre-Christmas regatta (December 17-20) will be a fascinating window into their relative performances.