On 15 March 2020 the 1911 steel barque Europa arrived in the Beagle Channel at the end of a three-week voyage to Antarctica. Story by Nigel Sharp, photos by Jordi Plana Morales.

The circumstances were almost routine. In every southern hemisphere summer since 2000, Europa has undertaken several such voyages – typically five each season and with up to 55 people on board, most of whom are charter guests. To keep on schedule towards the end of this voyage Europa had to motor quite a bit of the way across Drake Passage as it was upwind. “We always plan a little sail-by off Cape Horn at the end of those voyages,” Eric Kesteloo, Europa’s captain since 2006, told me, “and then we have the westerlies for the last day’s sailing. That all went well.” But as she entered the Beagle Channel the crew heard some news on the VHF radio which was to fundamentally change Europa’s plans – immediately and for the foreseeable future. 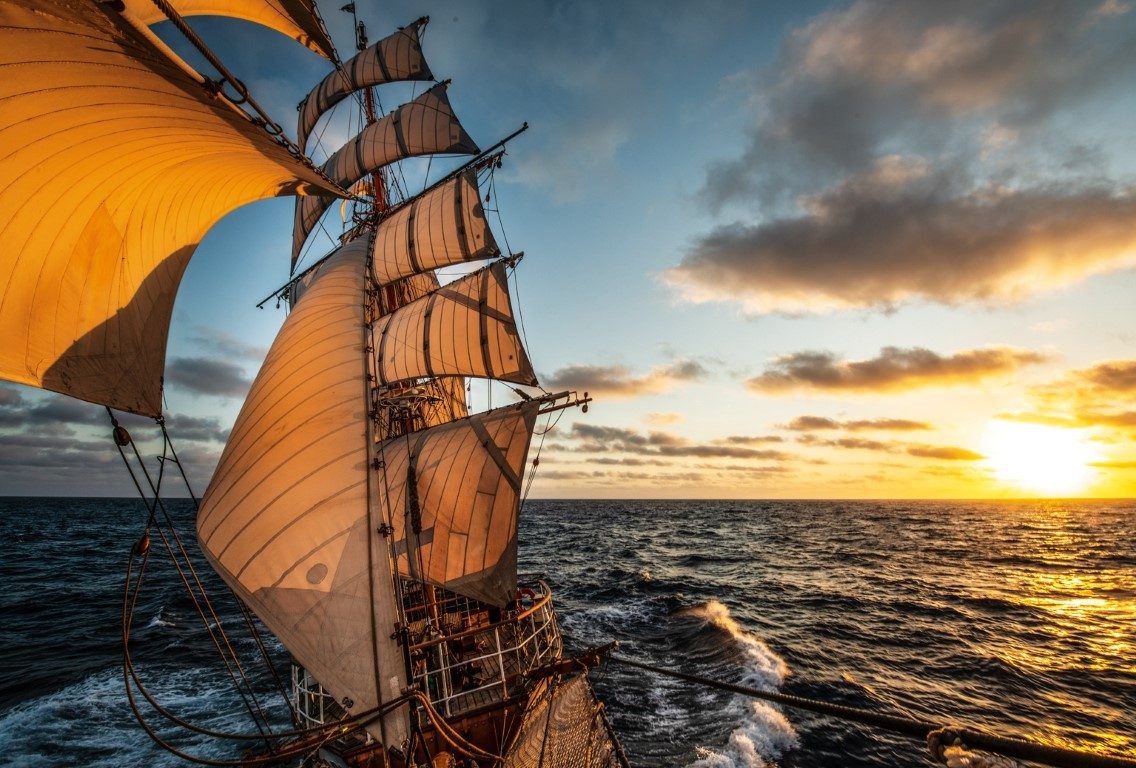 At the beginning of that voyage Covid-19 had been causing concerns, although it was not yet clear how serious it would become. Certain precautions had been taken – guests filling in a form to confirm they hadn’t recently been to China, for instance – but otherwise the voyage had gone ahead as normal. Three weeks later, however, the virus was officially a pandemic and the situation was very different. The news that the crew heard as Europa made her way up the Beagle Channel was that Puerto Williams had been closed, and when they arrived at their home port of Ushuaia about four hours later, they found that they were only just in time: another six hours and the 48 guests would not have been able to disembark.

Up until then the plans for Europa included taking her to the Pacific next, where she would undertake 15 separate voyages – all of which had been sold out for some time – to several remote Pacific islands, then to various Australian ports before sailing round Cape Horn to the Falklands and beginning another Antarctic season.

Having already made arrangements to refuel and replenish food supplies in Ushaia in readiness for the first leg, they were still able to do so straight away. The crew, however, were all quarantined and had to stay on board, initially alongside and then at anchor. “I spent a lot of time browsing the internet trying to find out more about the virus,” said Eric, “and I couldn’t see anything positive about how long it was going to last.” After consultations with his colleagues at the Europa office in Rotterdam and with his crew, it wasn’t long before it was decided that the best thing would be to take Europa home to Holland. 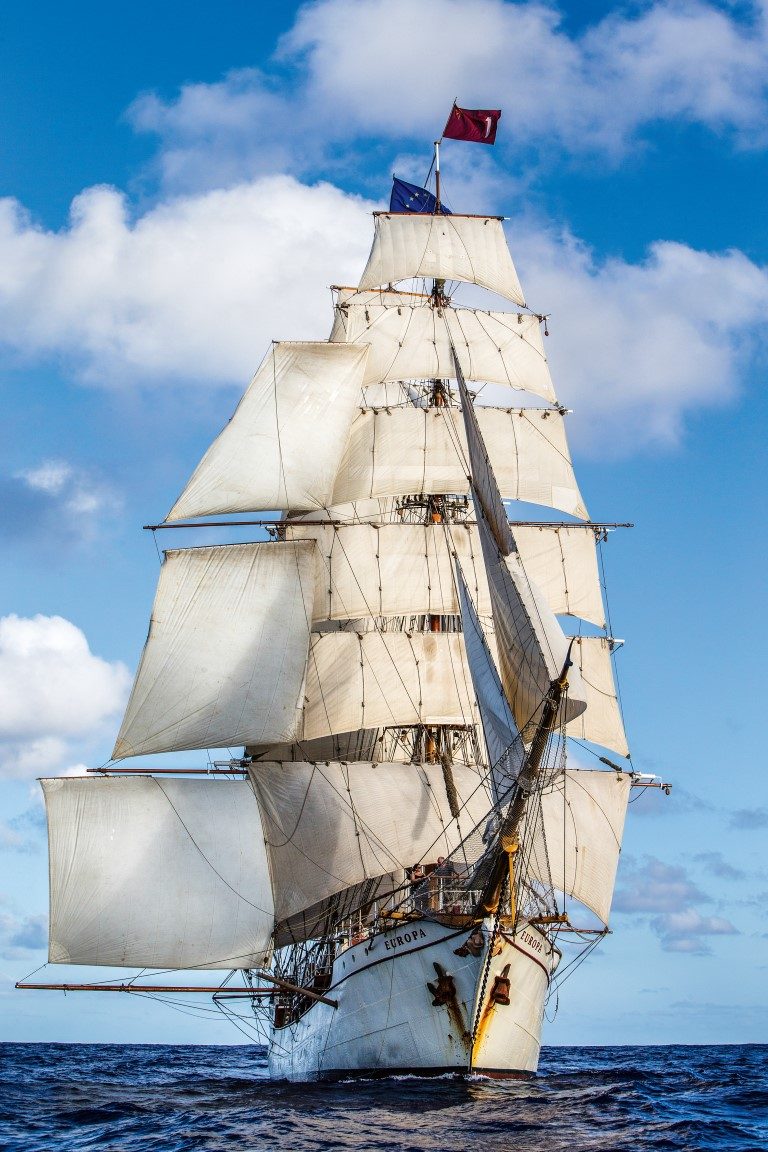 But it would be a voyage like no other, at least in this day and age. Europa has a fuel capacity of 20,500 litres, an engine that uses 500 litres per day (giving a speed of five knots in calm conditions), and she needs to run a generator continuously, which uses another 130 litres a day.

They knew that they would be unable to stop anywhere to refuel and so the 10,000-mile voyage would have to be non-stop and most of it under sail. (The longest voyage Europa normally does is about 3,500 miles between the Canaries and Salvador). The food they had just brought aboard was for 55 people for 10 days, but they now needed supplies to last much longer. So, it was arranged for some of the crew (wearing makeshift PPE) to make two trips ashore in Europa’s Zodiac RIB to stock up further. The extra food was then stored in one of the empty guest cabins where it was left undisturbed for a full week.

Then, on the morning of March 27 and with 19 crew on board (aged 21 to 57, from 12 different nations), Europa topped up with diesel one last time and departed. To exit the Beagle Channel, they were obliged to take a pilot. “We didn’t think it was really necessary,” said Eric. “In fact we thought that, with the virus, having a pilot on board was less safe than the navigational hazards in the channel. But it’s the law.” After motoring for about six hours so that they could disembark the pilot as quickly as possible, they set sail. 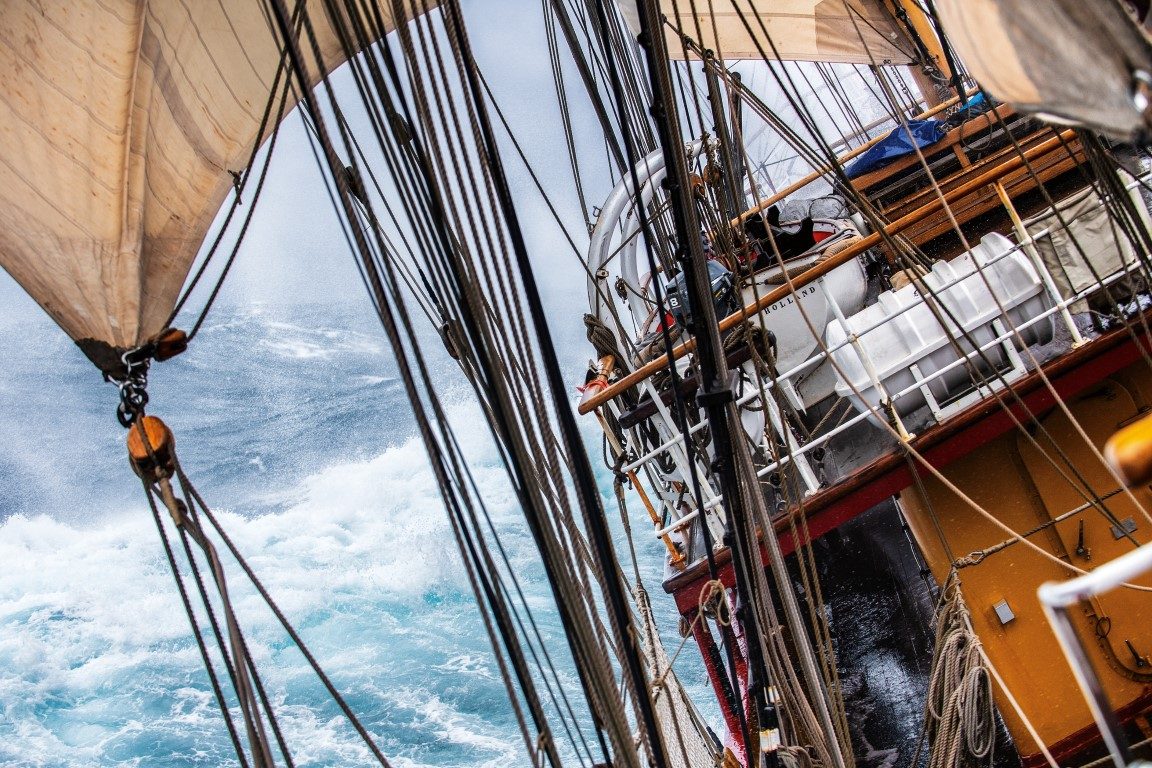 The plan was to follow the Cape Horn to English Channel route prescribed for that time of year in the Admiralty publication Ocean Passages for the World. During the first part of the voyage they were entitled to expect strong, favourable westerlies but instead had very little wind at first and then north-easterlies. But then a low-pressure system caught up with them and, unusually, slowed down and stayed with them for more than a week. “I called it our epic low because it brought us 1,000 miles of fantastic sailing,” said Eric.

The south-east trade winds then gave them “uneventful sailing” up to the equator, where they were lucky enough to have no more than a couple of days in the doldrums. “It was never completely calm,” said Eric, “but it was erratic. Every time there is a windshift it takes about 40 minutes to readjust all the sails and then the wind would change again. So, we were very busy for not much gain.”

When Europa crossed the equator a “secret ceremony” was held for the six crew members who had not previously done so. “We kept it nice and easy,” said Eric. “No crew members were damaged in the operation!”

Several times in the middle of the Atlantic, most of the crew went swimming. This was usually when there was no wind at all but, “we even had people swimming while we were sailing slowly – they jumped off the jib boom and climbed on board amidships as the ship passed them.”

After the equator there was “beautiful sailing” in the north-east trades for a while but from then on progress was slow. “We didn’t just have one Azores high,” said Eric, “we had three!” 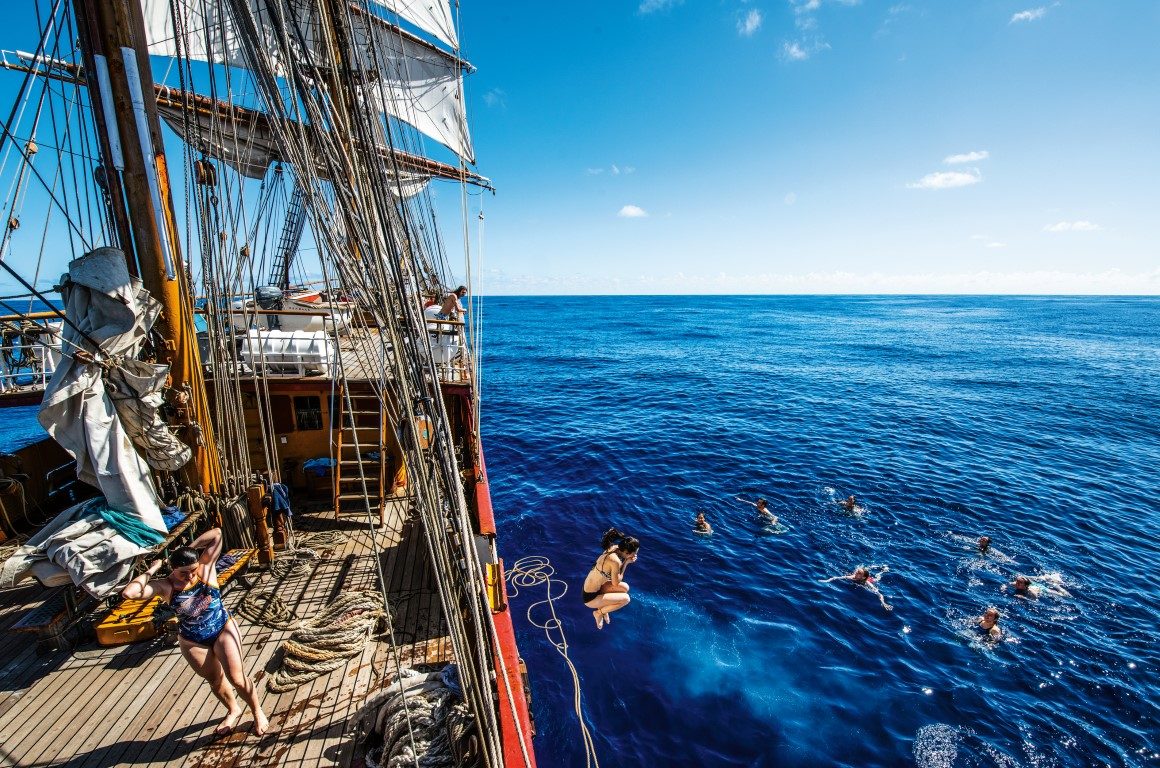 Once they got into the North Atlantic “not far from Nova Scotia”, they were disappointed, once again, not to find the prevailing westerlies which should have brought them most of the way home. But by now, having not used the engine at all since the Beagle Channel, they had less reason to worry about running out of fuel, so they motored for nearly 24 hours. This was followed by another short period of sailing, followed by five days of motoring before a gale brought them into the Western Approaches.

The wind then dropped away again, and they started the engine for the last time. For most of the voyage they had encountered very little shipping: a handful of vessels had appeared on the AIS in the South Atlantic on passage from the Cape of Good Hope to Brazil, and they had sighted just two vessels (and a few others on AIS) in the North Atlantic. “But when we entered the English Channel we were very disappointed to see the brown smears of exhaust gases on the horizon – the smog of the shipping still going on.”

After three days of motoring up the English Channel and into the North Sea, Europa eventually arrived at Scheveningen on June 16, 81 days and 10,160 miles after leaving Ushuaia. They found quite a welcoming committee: the Royal Netherlands Sea Rescue Institution (the Dutch equivalent of the RNLI) met them with a box of salted herring, and several vessels from the Scheveningen Yacht Club also came out to greet them. “But it had to be toned down a bit when we got to the dock,” said Eric. “There was controlled access to just allow family and ex-crew to meet us. But it was a very nice calm welcome after a long trip.”

Europa has a total of 30 sails, including the six stuns’ls, but they didn’t quite manage to use all of them. The unstayed spars for the skysails weren’t rigged for the voyage; the flying jib wasn’t used; and although they had rigged the spars and rigging for the stuns’ls after the last Antarctic voyage, they only had the opportunity to use two of them, and then only for one day. The voyage’s most severe weather brought 62-knot winds and seven-metre waves, but the boat and the crew frequently encounter worse in Drake Passage. “It’s quite enjoyable once you get used to it.” said Eric. “Europa is great, a very seaworthy boat.” 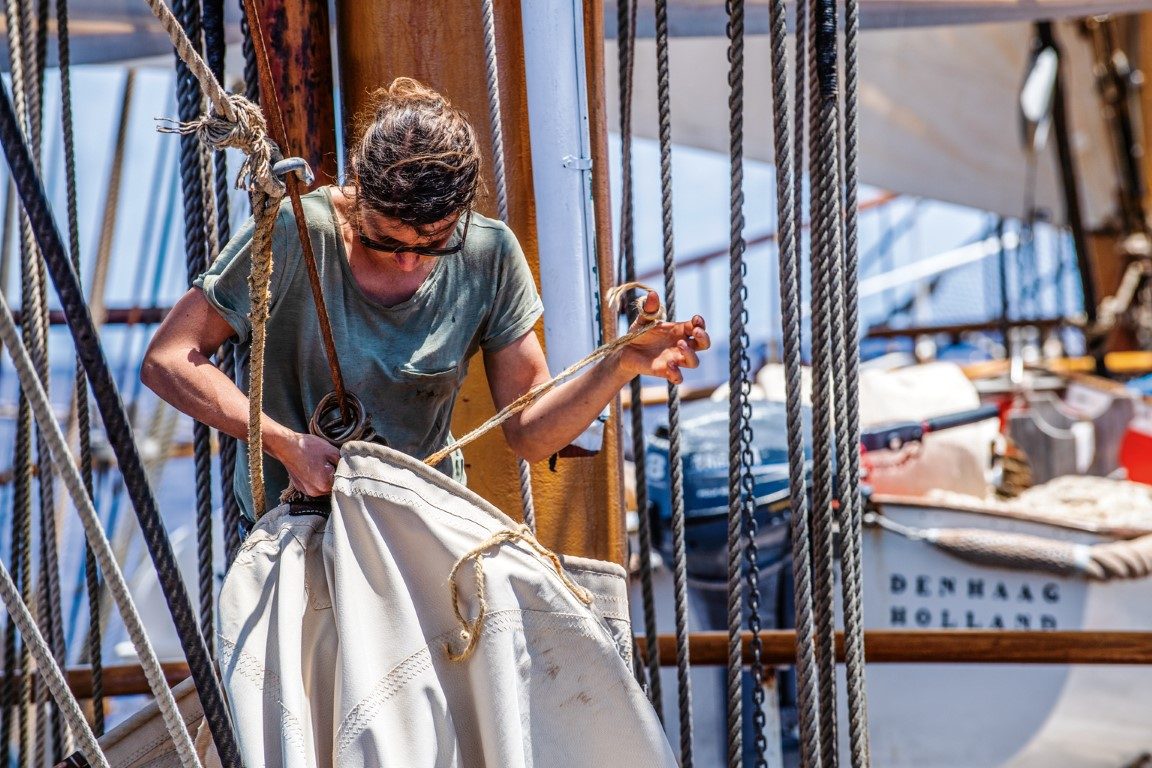 They had no real problems with food supplies. After the first week the cook thoroughly checked all the stores every day to identify anything which was starting to go off to ensure that as much as possible could be used before it was too late. The only significant thing they ran out of was potatoes but they “had lots of pasta and rice” and at the end of the voyage “still had fresh green apples left in perfect condition”. Thanks to the vessel’s watermakers, fresh water was never in short supply with enough for daily showers for everyone.

All of the crew were kept busy throughout the voyage “keeping the ship in shape,” said Eric. “There is always a backlog of little jobs which are left because there is no time or there is other stuff going on.” This included a great deal of varnishing, “rust-busting” and painting. The Pacific trip would have included a period in Valparaiso for a class survey but it was rescheduled for Holland, so a great deal of work was carried out in preparation for that.

One weekend they had Sunday off such work and the following weekend that was extended to Saturday as well “but by Sunday everyone was bored and they were very happy to get back to work again on Monday.” 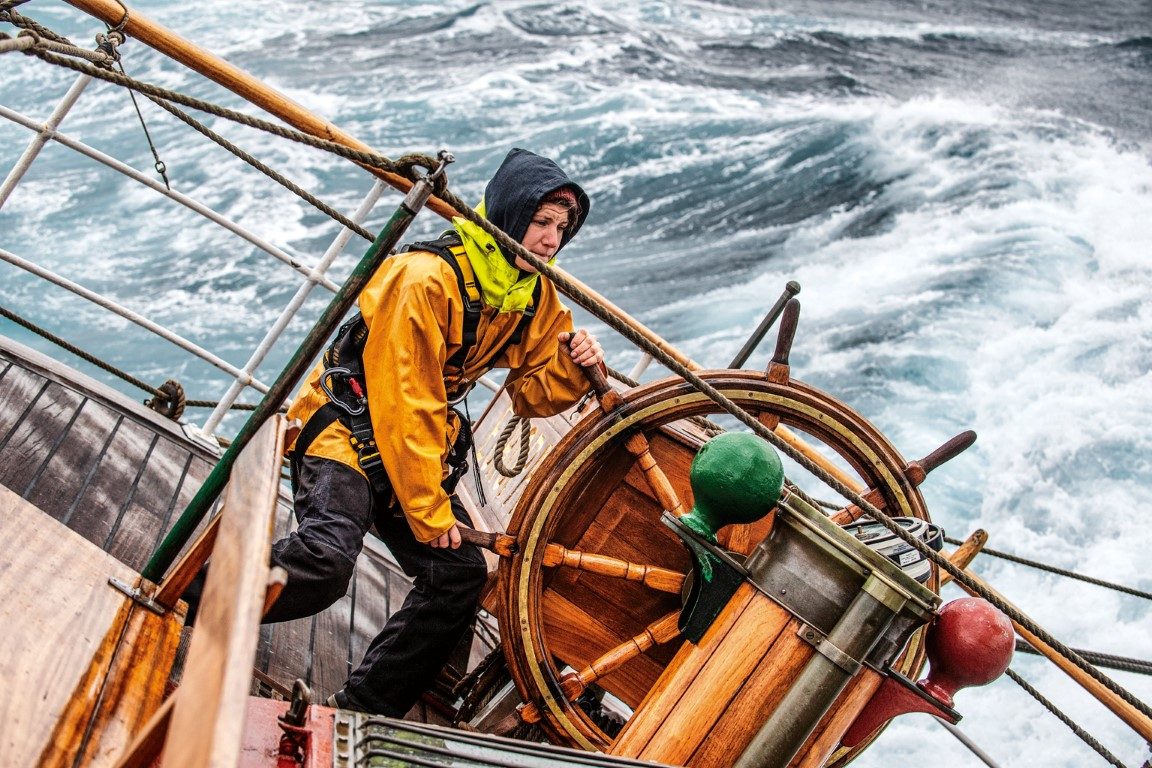 It was over a year before Europa was able to sail with voyage crew again. She spent her down time in various Dutch harbours, alternating maintenance periods with open ship days. This included some time at Het Scheepvaartmuseum (the National Maritime Museum) in Amsterdam where she had a free berth in exchange for allowing small groups of museum visitors to tour her deck.

One specific project introduced children to the Antarctic’s seven major animal species. The maintenance included rebuilding the deckhouse, renewing seawater pipes and central heating radiators, and a thorough refurbishment of the main food storage area, where second-hand racks which were fitted in 1992 have been replaced. 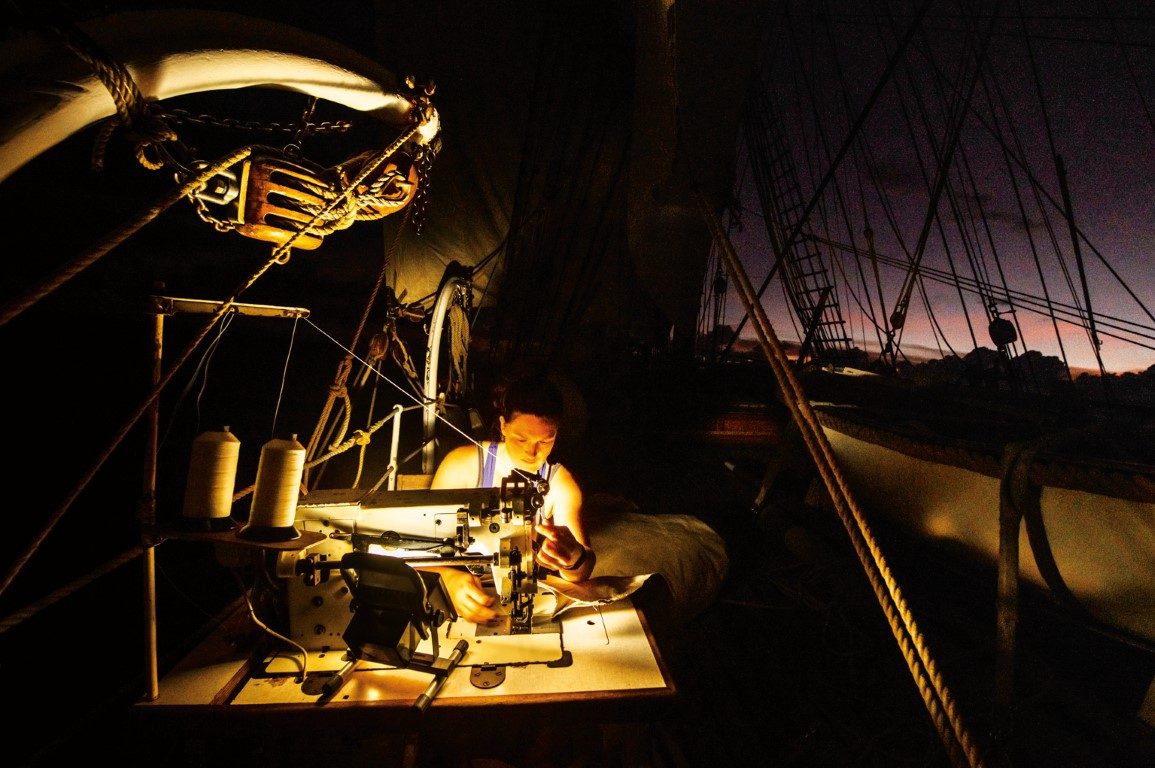 At the end of June 2021 Europa sailed again, first with a group of Dutch students and then on a few training voyages. In September she set sail for Montevideo from where she will take part in four Antarctic voyages, the last of which will end in Cape Town. Her 2022 programme will include the Tall Ships’ Race between Harlingen in the Netherlands and Antwerp in Belgium before, hopefully, resuming her Pacific voyages in 2023. 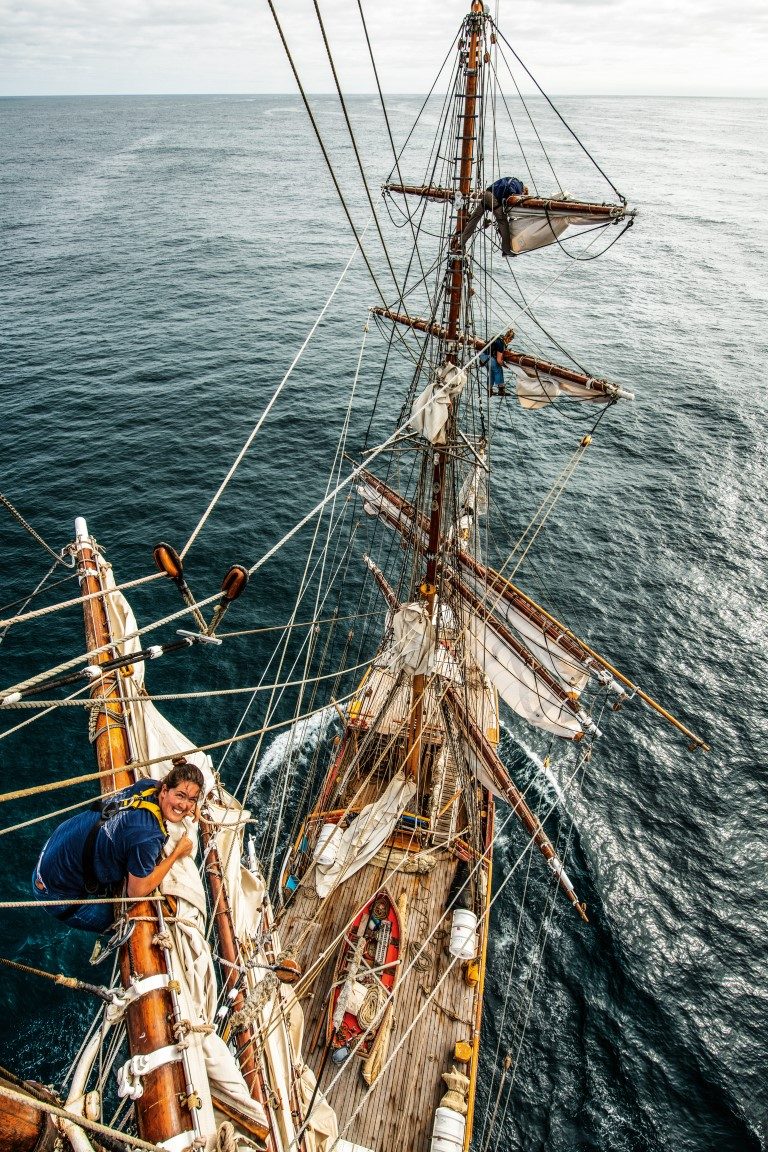 The way of the waka