In a quiet backwater of Aotea/Great Barrier Island, an unruly fringe of foliage tumbles down to within metres of the rusting steel plates of the dredge Wanganui. Story By Lindsay Wright.

It’s been nearly four decades since the old digger took her last load of spoil from the eponymous west coast bar harbour. Rust has holed her pitted, rivetted plating and the superstructure looks ready to collapse. High tide flows into the shapely old hull and spurts back out through her many orifices.

People putter by in dinghies – “oh, that’s an old fishing boat,” they speculate – but Wanganui has never carried commercial fishing gear and shows no signs of ever having been fished.

Built by Henry Robb and Co in Leith, Scotland, she joined a line of dredgers and tugboats which were steamed from there to every corner of the British Empire. Wanganui harbourmaster, Captain R.D. Stewart led a crew of 10 and left Dover in January, 1950 for the dredge’s three-month delivery voyage to her home port.

They arrived at Wellington in April, “bearded and sunken- eyed” the Gisborne Herald reported. The crew had been sleeping in wet bunks for 38 days since transiting the Panama Canal and the 253-tonne dredger had been swept by several big seas they “just couldn’t dodge.” The chain locker was flooded and water streamed through the crane’s swivel mount forward.

Just to complicate matters, the two compasses grew increasingly inaccurate until, from Cape Reinga to Wellington, Captain Stewart steered by the stars. 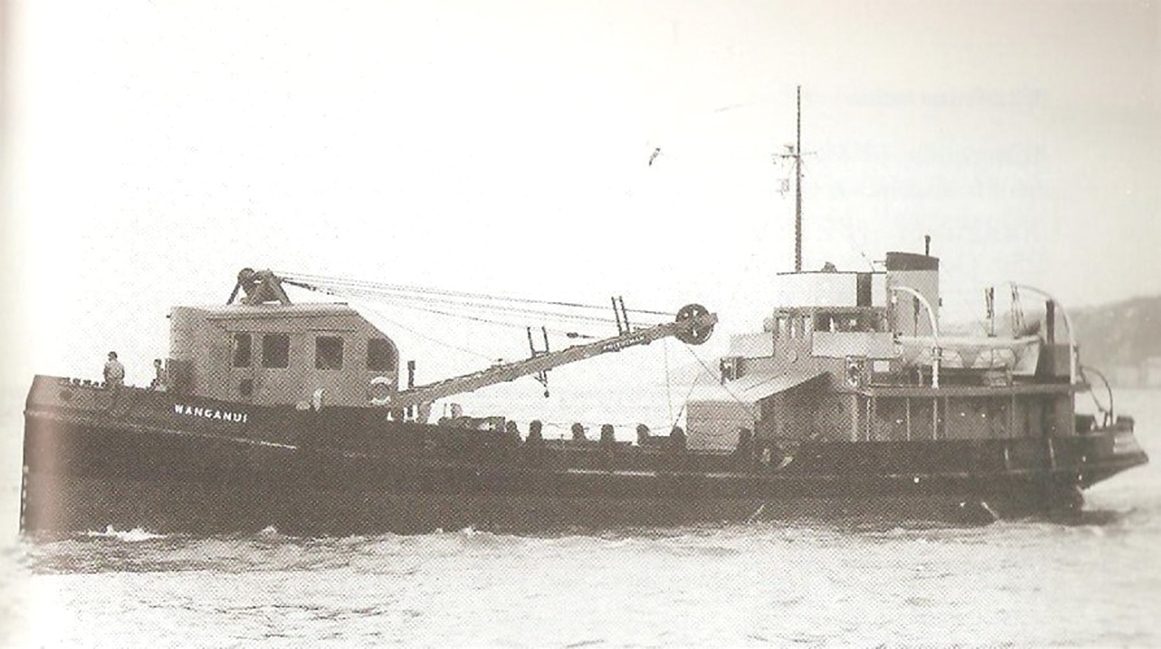 Within a few weeks the 33m grab-hopper dredger had been officially welcomed to Wanganui and started gnawing away at the heavy clay seams which had foiled her predecessor, the suction dredge Kaione (‘Sand Eater’). When the weather permitted she took six 150m³ loads of spoil to be dumped at sea – over an eight-hour day. 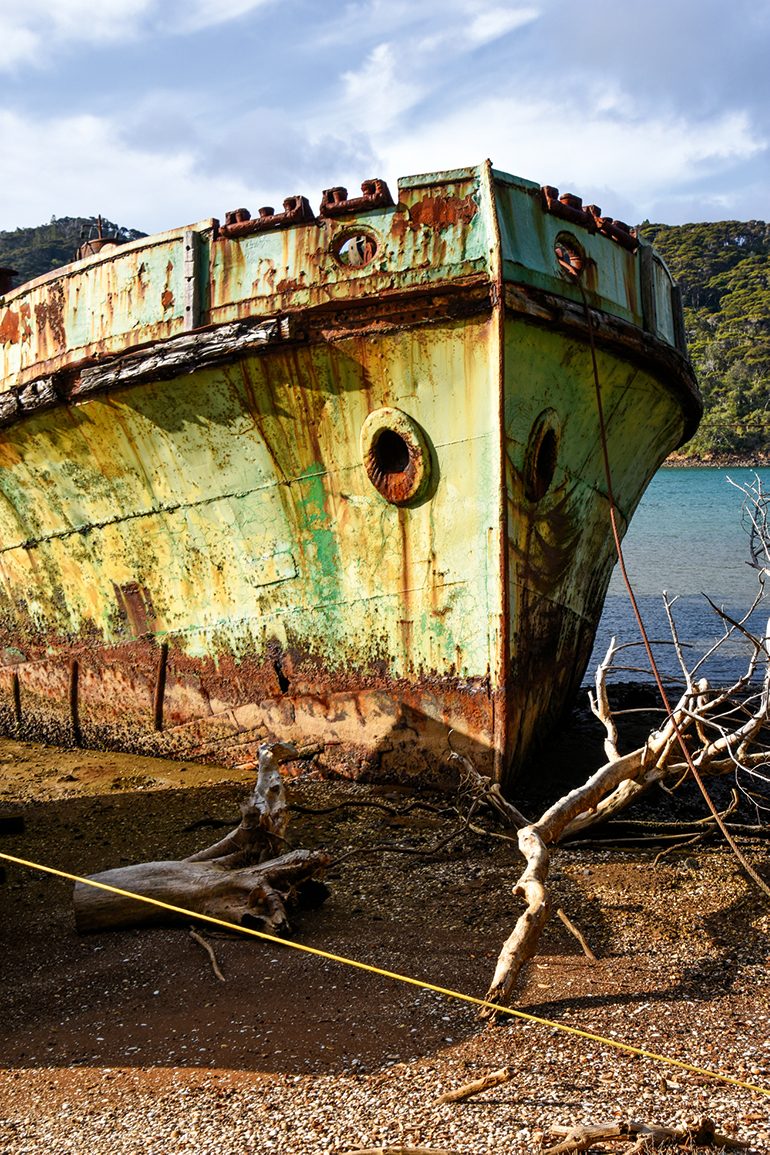 But like any hard-working vessel, she had her share of mishaps. On one notable occasion in 1964, a steering failure put her on South Beach. A wire rope was taken to the South Mole (breakwater) in an attempt to winch her off at the midnight high tide. The cable was run out by helicopter – believed to be the first night-time helicopter flight in New Zealand.

Groundings were common and her bottom plating was buckled like corrugated cardboard, but she still kept at the endless work of keeping the bar open.

The versatile little dredger was in demand on the New Zealand coast though and, powered by a single British Polar M4 four-cylinder, two-stroke diesel (360hp at 350rpm), she was employed at ports all around the country. It was Wanganui that dredged Deep Water Basin in Milford Sound – and ripped up power lines to the Tourist Corporation Hotel in the process. The hotel was without power for three days.

The British Polar (the same engine employed in the Norwegian ship Fram which supported Roald Amundsen’s successful trek to the South Pole) drove Wanganui at about eight knots fully laden. The same engine was also used to power the Royal Navy’s Oberon-class submarines. 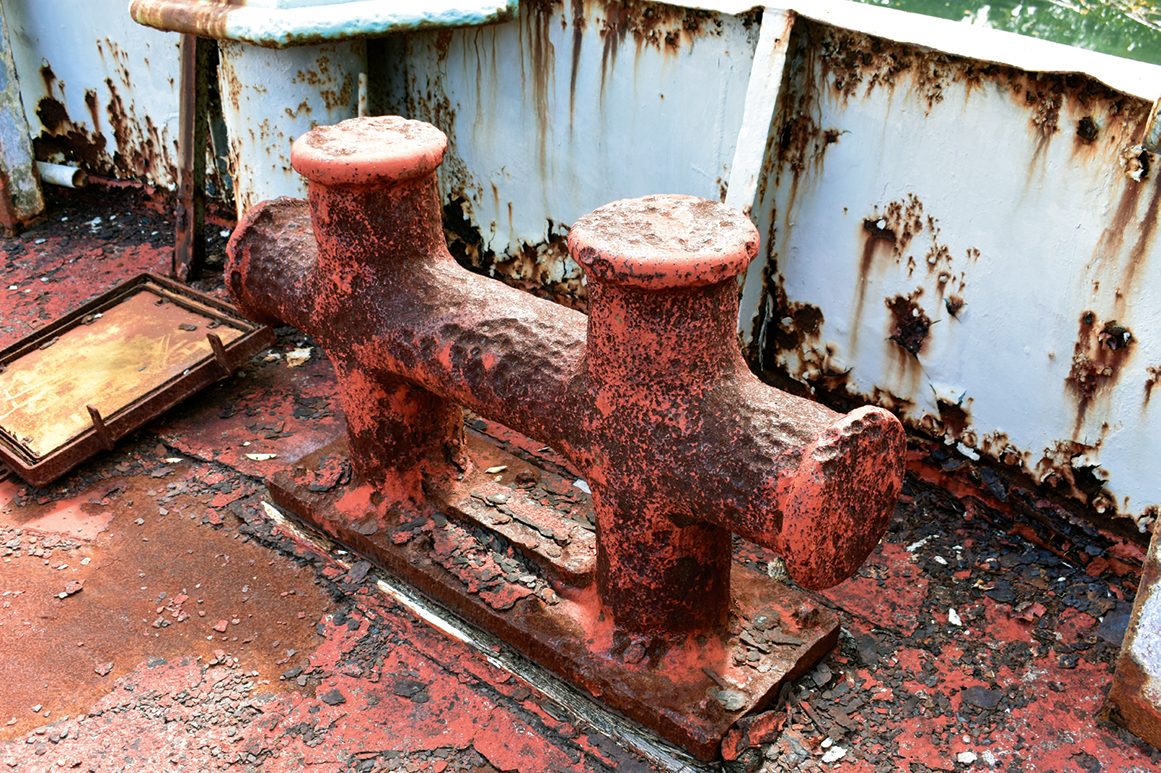 Once, heading south to undergo survey inspection at Lyttelton, the dredger took 24 hours to punch her way round Cape Campbell, and lost communications and electric power in the process. With a mean draught of 2.74m and beam of 8.3m, steaming into a fresh southerly was not her forte.

A JP4 Lister diesel drove the generator and a rare Russell Newbery engine provided power for the compressor, both kept immaculate by a succession of ship’s engineers.

Back in Wanganui, she acted as tug for phosphate ships and reefer vessels which used the port to load dairy products, and once took a doctor to a Russian freighter standing offshore with a sick crew person.

It was Wanganui that dredged Wellington Harbour’s ferry terminal and in 1962 she dredged the Manukau Harbour bar – for the first time in 36 years. 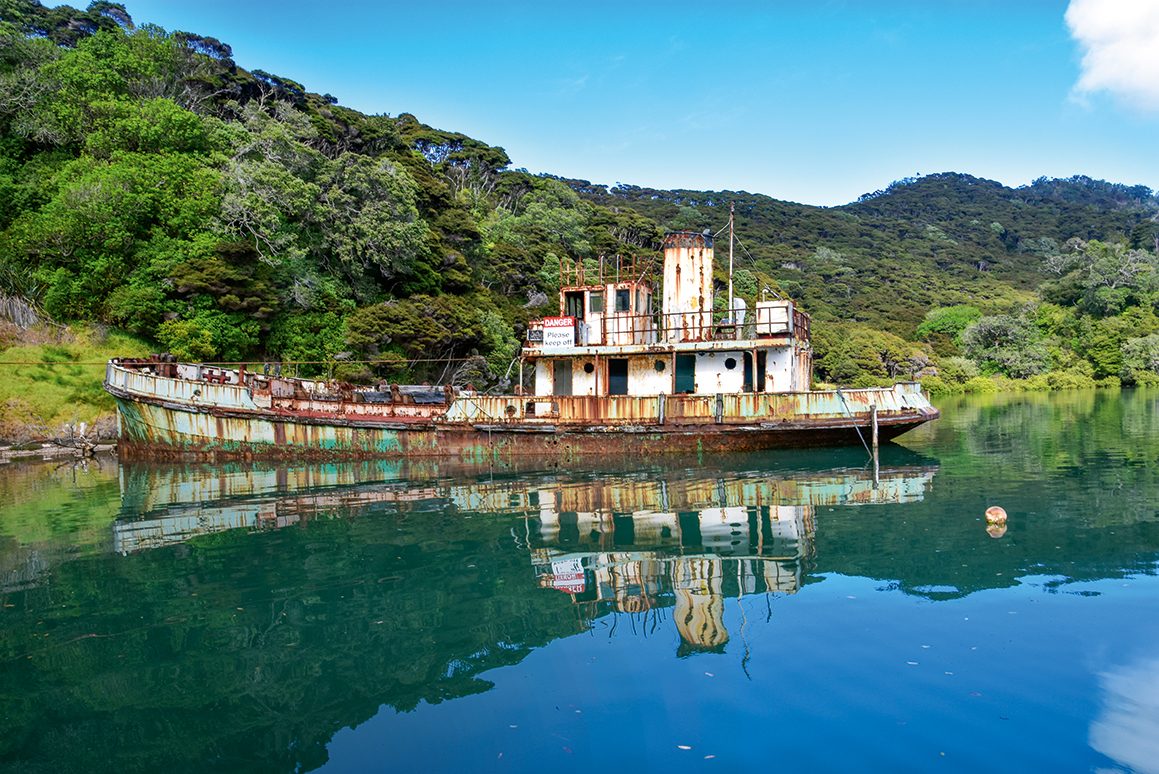 But in 1988 the doughty little dredger was just about worn out and passed into private hands. After some time as a live-aboard at Bowentown in Tauranga Harbour, the Harbour Board chipped in for the diesel to help her move. Looking for a place to rest, she was steamed north to Aotea/Great Barrier Island – and then to her present location to have zinc anodes welded to the hull.

But the price of non-ferrous scrap metals had risen and the ship was wedged firmly on the beach while the owner methodically stripped bronze, copper and stainless steel fittings and pipework from the tired old hull. The tide began to wash through the engine room and teak joinery was salvaged from the accommodation. Each fitting taken from her hulk took her further from ever going to sea again.

Wanganui is succumbing to her inevitable fate.

Much of the above information was supplied by Ken’s Wanganui Riverboats Facebook page.

Check-in at the Ice Hotel