The Auckland suburb of Ellerslie can celebrate 75 years of boatbuilding this year, with the company behind Haines Hunter Boats in New Zealand marking its 75th Anniversary.

Boating New Zealand sat down with Haines Hunter Director Lionel Sands and CEO Denis Kendall to talk about 75 years of artisan boatbuilding – and what the future holds for the company.

BNZ When did boatbuilding start for the business in Ellerslie, and what was the company building?

LIONEL SANDS In 1946, SeaCraft – the forerunner to Haines Hunter New Zealand – was established by my late father, Yeoman ‘Sandy’ Sands. Over the past seven and a half decades, the company has continuously evolved and maintained its position at the forefront of the trailer boat industry in New Zealand.

In those early years, we produced clinker-built timber boats and oars – in fact, SeaCraft was the largest manufacturer of oars in New Zealand for over 20 years. The range of boats we built were powered by Seagull outboards or small inboard petrol motors.

BNZ When did things start to change from that traditional style of boatbuilding?

LIONEL SANDS Seacraft grew quickly throughout the 1950s, driven by solid demand for quality boats and good accessibility to outboard motors, allowing the company to consolidate its position as New Zealand’s most prominent production boatbuilder.

The mid-sixties saw a transition from wooden boat manufacturing to fibreglass – a radical departure from traditional boatbuilding skills, but we immediately recognised it as the new way forward.

To fully embrace this new technology, two of our staff were sent to California to learn the new processes. During that period, the company constructed a purpose-built lamination/ glass factory. With temperature and humidity control, this new factory was state-of-the-art, giving us the means to produce world-class boats. 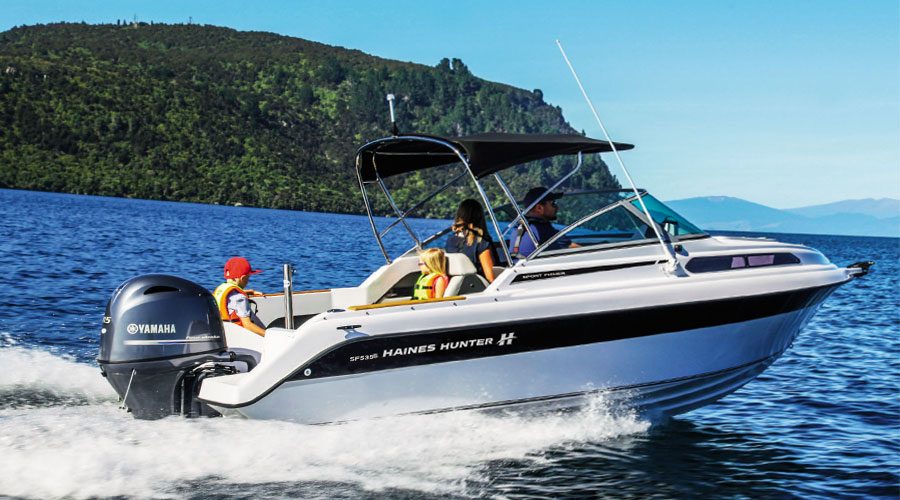 The 535 range was a huge success over more than 36 years. It has been superseded by the SF545.

BNZ At the time, was there a model that stood out for the company?

LIONEL SANDS Yes, absolutely. Having acquired the Mercury Outboard franchise and with more horsepower available, SeaCraft developed a range of fibreglass boats to suit these ‘BIG’ engines of up to 130hp! The flagship was the SeaCraft Valencia, a 17-footer [5.2m] powered by a 115hp motor and retailing for $5,000.

BNZ When did Haines Hunter enter the market?

LIONEL SANDS Haines Hunter (NZ) Ltd was established in New Zealand in 1972. The business acquired the manufacturing rights to Haines Hunter in 1980 and purchased the Haines Hunter brand outright in 1984. From those early years in the 1980s, Haines Hunter was taken to another level with the introduction of now-iconic models such as the 1800S, SF535, V565L and SF700.

BNZ What were some of the iconic Haines Hunter models in those early years?

LIONEL SANDS I guess the model that catapulted the Haines Hunter brand in New Zealand was the V198 which we manufactured between 1974 and 1985.

The V198 came onto the market just as bigger horsepower motors became available from manufacturers in the US. The V198 was almost the only New Zealand boat on the market that could handle the 175hp Mercury Black Max and the 200hp Evinrude/Johnson outboards released in 1975.

Haines Hunter built 320 V198s, and while we stopped production in 1985, the model has retained an enviable reputation for its exceptional seakeeping and rough water performance. 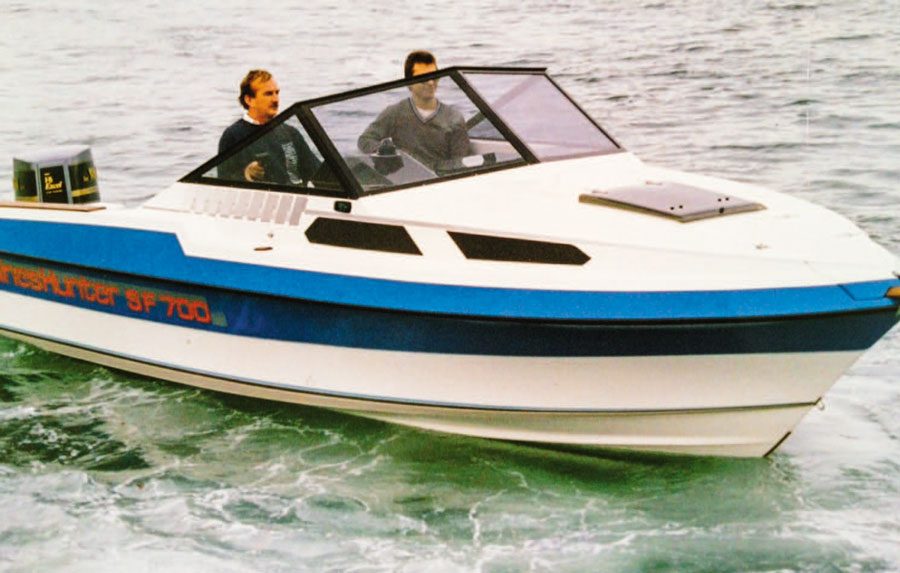 The SF700 Mk1 with Lionel Sands at the helm

BNZ The V198 was originally a V19 wasn’t it? And it turned out to be quite an important model for the brand?

LIONEL SANDS Yes, that’s right. The V198 was originally a Haines Hunter V19 – they were manufactured under licence in New Zealand by Fibreglass Moulders. The V19 had a turnedout chine, so what they did was turn the boat upside down, recreated the topsides and a new deck, retained the underwater shape, and that became the V198 in New Zealand. It was essentially an exclusive model to New Zealand.

Over here on the New Zealand side of the ditch, it was just a brilliant boat. During the early period, the boats were available in various power configurations – sterndrive, single outboard and twin outboards.

When we took over the moulds in 1980, we upped the ante with upgrades to trim and upholstery. We only did a few with sterndrives; we focused on the outboard-powered models since bigger outboards were becoming more readily available, and it suited our production facility.

Such was the success of the V198 that it helped shape future Haines Hunter models.

What became apparent in the early 1980s was that people wanted bigger boats and more cockpit space. In about 1985, we thought that if people wanted a bigger boat, why don’t we build them one, so we took a 198 hull, added a metre to it, created a whole new set of topsides and new strakes and that morphed into the 700. 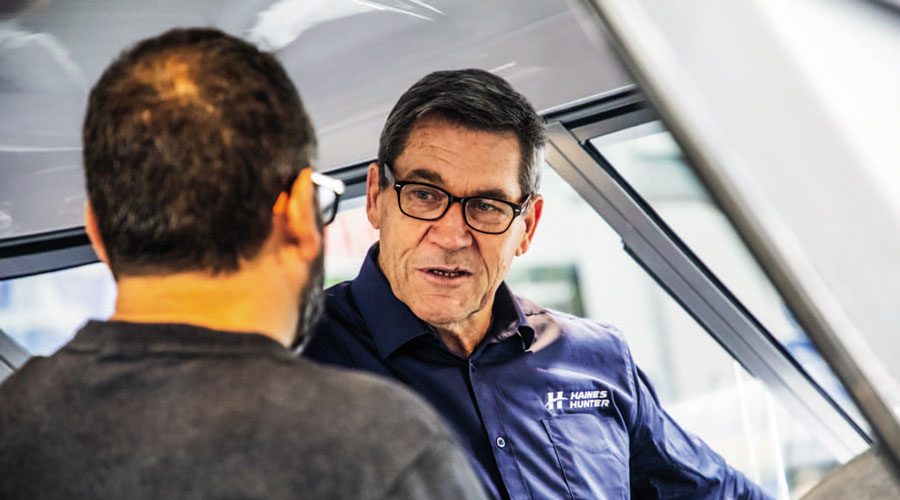 BNZ The SF535 is arguably the most successful production trailer boat in New Zealand. What were its origins and what made it so successful?

The 535 was developed from the original V17R and V17L. They were Australian designs manufactured under licence by Haines Hunter NZ. When we acquired the manufacturing rights for New Zealand, we set about redesigning the boat. We retained the underwater hull shape with the deep V and redeveloped the topsides and the deck to form the SF535.

We designed it with families in mind. It was a manageable boat; it didn’t require a large tow vehicle, and it performed well with moderate horsepower, which made it a very cost-effective package for Kiwi boaties.

It had a practical and roomy layout, a variety of seating configurations, plenty of storage options and a spacious cabin – from fishing and diving to family boating, it did it all. Family-orientated and affordable, it was well-suited to New Zealand conditions.

It also had the inherently soft-riding, 21o deep-V hull with exceptional rough water handling characteristics. It was the next step up from an entry-level boat but gave people confidence in boating – we’ve seen many of those boaties move up through the size range into bigger Haines Hunters.

BNZ How many Haines Hunter’s have left the factory over the years?

LIONEL SANDS There isn’t an official record of just how many Haines Hunter’s have been built in New Zealand, but the estimated figure is in excess of 6,500.

BNZ In the past year you’ve released a new model, the 635. Are you always developing and improving? What changes have you been making?

DENIS KENDALL Like any craftsmen, we’re always looking to see how we can improve our products. We are pioneers of fibreglass boats in New Zealand, so Haines Hunter boats have been evolving constantly. Among a raft of improvements and innovations, the new generation Haines Hunter designs now feature a moulded composite PVC foam floor that’s bonded to the hull, creating watertight chambers that deliver reserve buoyancy.

With each model that comes out of the factory, it’s always about all-round continuous innovation. Every builder should listen to its customers and dealers, so we’re always making refinements – from ergonomics at the helm, around the cockpit and throughout the boat to upholstery upgrades. Making what we think is already a great boat even better.

The company’s flagship 725 in SS guise.

If we look at the ergonomics of the helm station on the 635, for example, we want everything to be easy for the skipper to reach. We have provided more niceties such as cupholders, charger points for devices – evolving our product to match the way Kiwis want to go boating.

We’ve always been very proud of our seating configuration and the level of comfort our seats provide. Just recently, we’ve upgraded our seats with new vinyl, and we’ve upgraded the panels and bolsters to give even more comfort and support.

BNZ What does the future hold?

DENIS KENDALL Building more boats! As for much of the industry, sales during the Covid-19 pandemic have been very good for us. Our new model launched last year, the 635, has been well-received by our dealer network and Kiwi buyers.

The future? As always, we remain focussed on our dedication to continuous innovation and to refining our range – and to seeing more Kiwis getting out on the water in a Haines Hunter! BNZ