Kiwis may have voted against legalising dope, but the issue isn’t settled yet. You may not be allowed to skin up a fat one any time soon, but you could soon be setting sail in a tinnie or a hemp boat. As if that weren’t enough, it might also be built from old plastic drinks bottles, aluminium window frames, pineapple leaves, cork and old cardboard boxes.

That’s because a number of determined innovators are breaking away from the near ubiquity of glass (or carbon) fibre lay-up in yacht hulls to offer less environmentally damaging alternatives.

Not in a conceptual, pie-in-the-sky, still-on-the-drawingboard sort of a way, but in the practical sense of already proven technology. People like Germany’s Friedrich Deimann, a boatbuilder and engineer who has dedicated the last decade of his life to proving hemp as a viable fibre for building composite boats. The recently launched Flax 27 dayboat is the floating proof of his vision.

He started his career as an apprentice wooden boatbuilder. “I loved the aesthetics, the feeling of wood, but I realised that it would be hard to make a living in this profession because people don’t want to maintain wood,” says Deimann.

“Then I worked on composites. They gave so much freedom with geometry, and you could build so light, but I had a really hard time working with the materials: glassfibre itched my skin, and the resin in the air.”

So he took himself back to school, doing a masters in using natural materials and composite technology. His final piece of coursework was the building of a sleek, futuristic looking kayak using hemp fibre and bio-based resin. 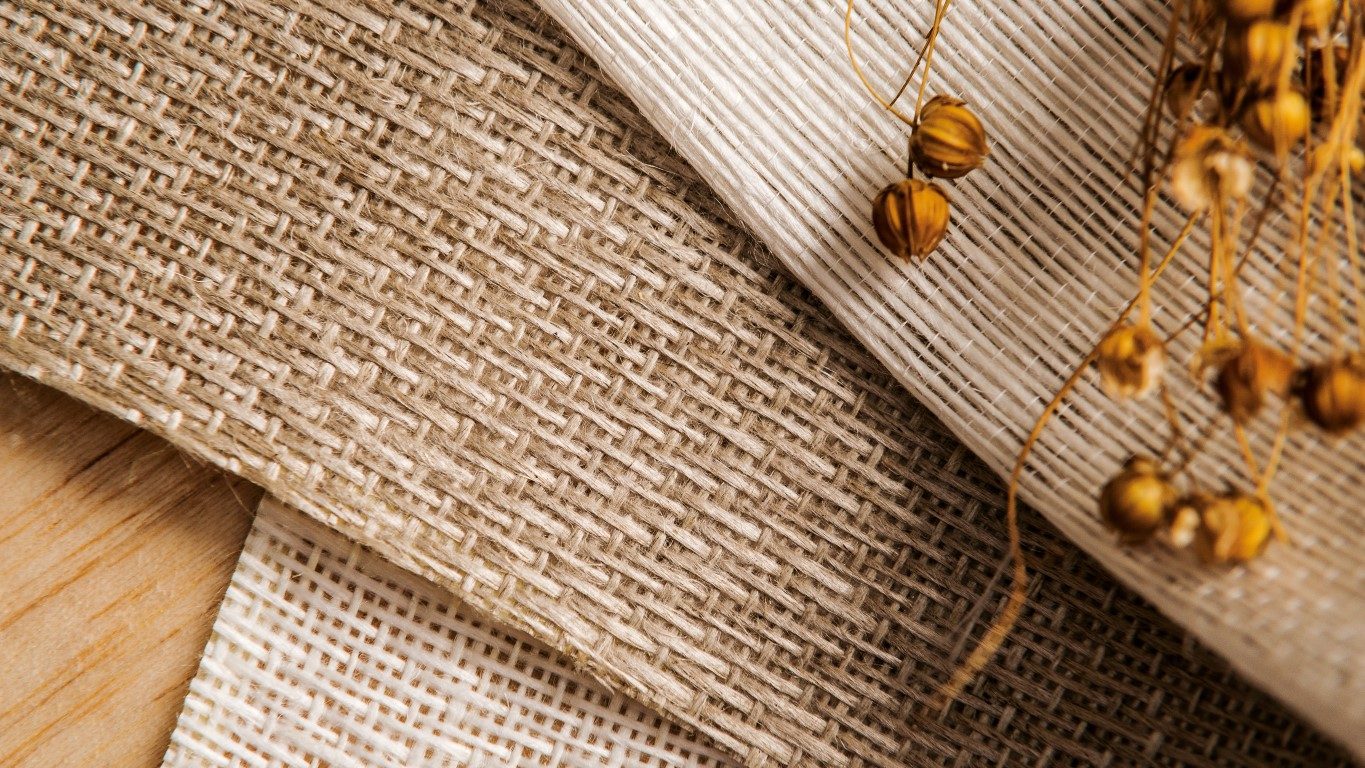 At that time, there weren’t any big suppliers of suitable hemp fibre – the only source he found was a UK factory which could supply a minimum order of five 50m rolls of cloth. That’s changed now, with the emergence of companies like Switzerland’s Bcomp, which has developed bi-axial, unidirectional and twill matting from specially treated hemp fibre. Bcomp claims that production of its ampliTex fibre emits less than a quarter of the CO2 basalt, and just 3% that of carbon fibre.

Ten years later, and Deimann’s Green Boats has at last launched its first model – the 27-footer designed by Germany’s Judel-Vrolijk design team. It is a beautiful creation, as I discover when I step aboard on a Berlin lake with owner Michael Ernst.

The first thing he bids me do is kneel down to examine the foredeck. What looks like russety brown gelcoat from a distance resolves as a stunning plaid-like weave. The gelcoat’s clear so you can see the beauty of the flax fibres that reinforce the hull, no doubt fuelling quiet satisfaction as you screech along on a rail.

As an option, the see-through gelcoat costs a bit more, because it requires minute accuracy in the positioning of the flax matting during lay-up. And in fact, the whole boat costs a fairly eye-watering NZ$205,000. But Ernst has no regrets.

“I wanted a fast boat that looks nice,” he shrugs. Green Boats says its natural fibre design is not more costly than GRP if you price in ‘environmental externalities’. That may be true, but it’s a still an expensive boat. The aim is to show what’s possible, not to set up a high-volume production boat yard, explains Deimann. “With us you get something quite unique. If we sell five boats a year, we’re super happy.”

Flax actually boasts some other advantages over standard glass matting, too, according to Baltic Yachts. The Finnish luxury yacht builder is incorporating 50% ampliTex into the build of its new Café Racer 68, which it believes will be the largest flax boat yet when it launches in the spring.

“An advantage of flax is that it absorbs vibration and consequently has excellent sound deadening properties,” says MD Henry Hawkins. “So we can reduce the amount of sound insulation in a yacht and save space.” It was an approach that helped to lightweight the 130ft Baltic My Song, where natural fibre-lined floorboards and ceiling panels reduced the amount of sound insulation required.

Baltic is allying flax with carbon reinforcing in high-load areas, with balsa-cored flax laminate in the boat’s stringers and bulkheads. For the cores of the non-structural interior furniture, Baltic uses Armacell foam sourced from recycled PET bottles. “The material is made from recycled coloured plastic bottles which cannot be re-used in bottle making.” 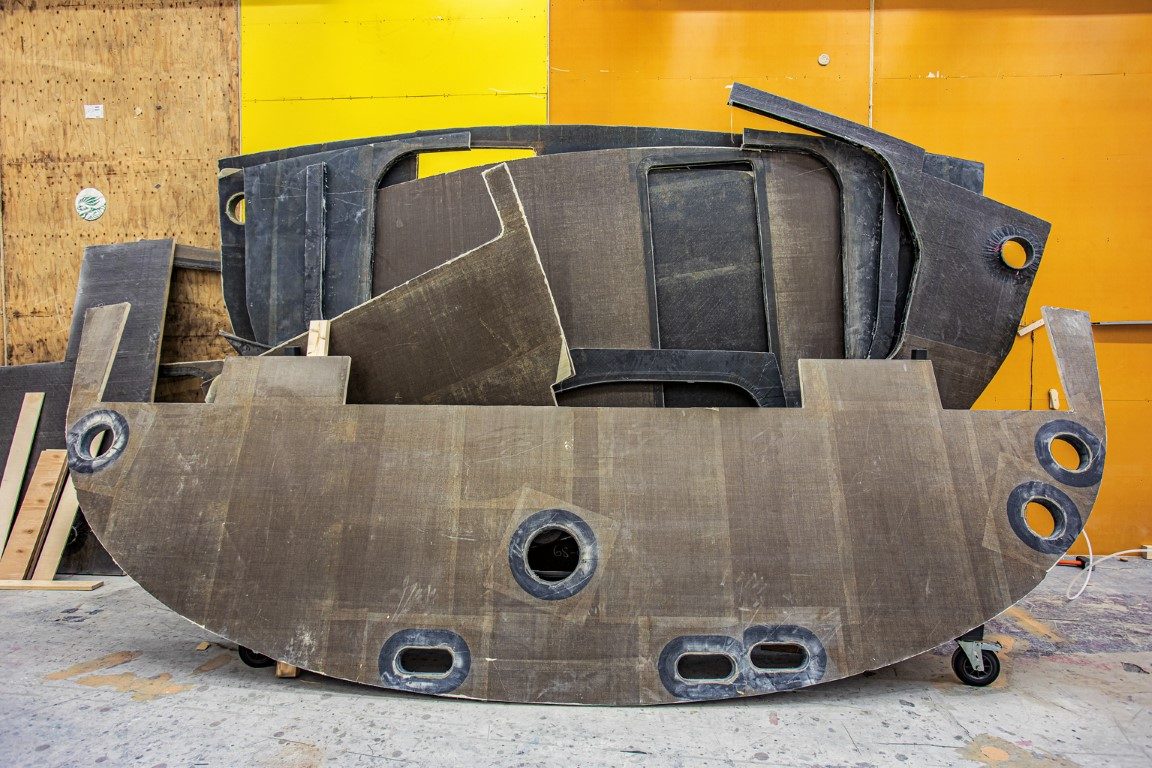 Tauranga-based composite wizard Nic de Mey sounds a note of caution here, however. “PET foam uses two to three times the same amount of resin as traditional cores,” he tells me. “The boat’s inherently heavier, the vessel then spends its lifetime carrying this weight around and expending energy doing it.”

But if hemp’s such a useful building material, why is’nt it being used more widely? “It’s like teenage sex – everybody’s talking about it, but nobody’s actually doing it,” exclaims Deimann. He reckons we’re on the cusp of a revolution, though.

Hemp composites have found their way into high-end car parts, and it is also a buzzword among small-scale boatbuilders looking to differentiate their products to a market that’s increasingly aware of the irony of trying to enjoy the natural world from the comfort of a large chunk of floating plastic.

“Slowly, slowly people have been picking up on it and now, in the last two years – especially among the younger generation, there are 10 companies claiming they work with this in the marine industry,” says Deimann. “It’s not rocket science to build with these materials, but it does take a learning curve – you can’t simply substitute synthetic for natural materials.

“If you break down the costs, you realise that we can produce a product today that is cheaper than a glassfibre boat. The 2030% premium for the fibres is because there are only a handful of natural textile suppliers, but that’s already changing.”

Flax is just the tip of the iceberg, however. In an effort to attract a more environmentally savvy clientele, a number of nimble new brands have sprung up in Europe to build boats with a lower carbon footprint. The French father-and-son team behind Windelo catamarans began by designing a boat for themselves, before deciding they were on to something and converting the plan into a production model.

Instead of standard glassfibre, whose production requires toxic boric acid, the hulls are laminated using basalt fibre extruded from melted rock. While basalt fibres reportedly emit around half as much carbon as glass during the production cycle, it requires far less water and can be fully recycled. Windelo claims that adds up to an environmental footprint that is just 10% that of glassfibre. 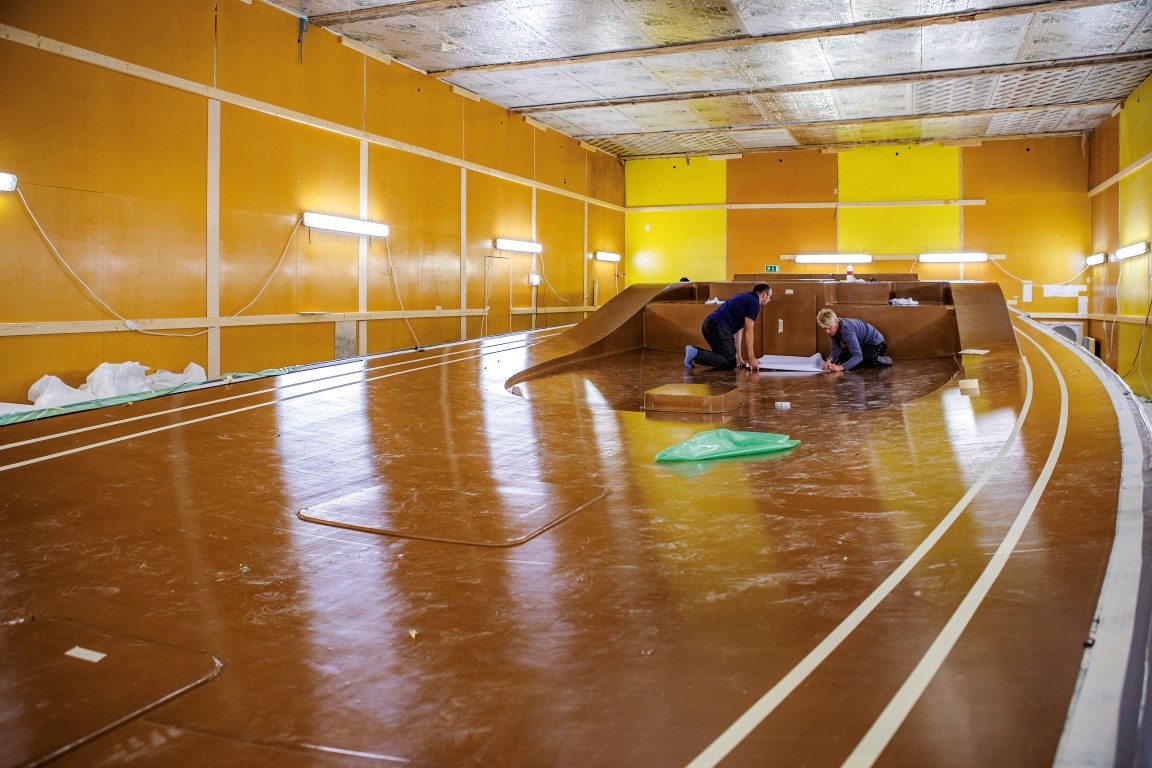 “Windelo is about searching out material innovations, new production techniques that drive a new economic reality,” says founder Olivier Kauffmann. “We build performance and lightweight boats and wanted to be part of the transformation linked to the respect of our environment.” The interior finish favours natural materials like cork, bamboo and linen. Furniture is principally made of composite, using natural materials as coating and recycled PET foam.

What’s interesting here is that the Windelo range (45ft–57ft), aims to stand very much on the strength of its performance and comfort. With design from the well-known team of Christophe Barreau and Frederic Neuman, the environmental story is an add-on, not the main attraction.

The first two boats sold have been customised to include lots of solar panels and an electric drive, and include lifting dagger boards to improve windward performance. There’s a unique helm station at the front of the saloon which can be opened to the elements or closed, while the saloon’s back wall folds up into the coachroof.

Vaan Yachts of the Netherlands is even more ambitious with its use of sustainable materials. It has chosen aluminium for the hull of its ‘cabriolet’ catamaran, half of which used to be drinks cans, road signs and window frames. Why only half?

“Aluminium is 100% recyclable, but the alloy of the material needs to be known so that it has the exact alloy and properties one desires,” explains founder Igor Kluin. “With post-consumer scrap, a high-tech scanner separates the aluminium into different alloys so it can be recycled better. This process may still include some traces of another alloy or contamination of some kind, so when recycling the post-consumer scrap, it is now mixed with virgin material to guarantee the outcome and quality of the alloy.”

Vaan’s debut R4 was a sleek, minimalist 42ft cat designed to seduce confirmed monohull sailors over to twin hulls. But a larger R5 has followed soon afterwards, and the first hull is slated for launch during the European summer. The decks of both are in FSC-approved ‘teak-look’ cork, and the upholstery is made from a range of natural fabrics (pineapple leaves, for instance) and recycled yarns, from old jeans. 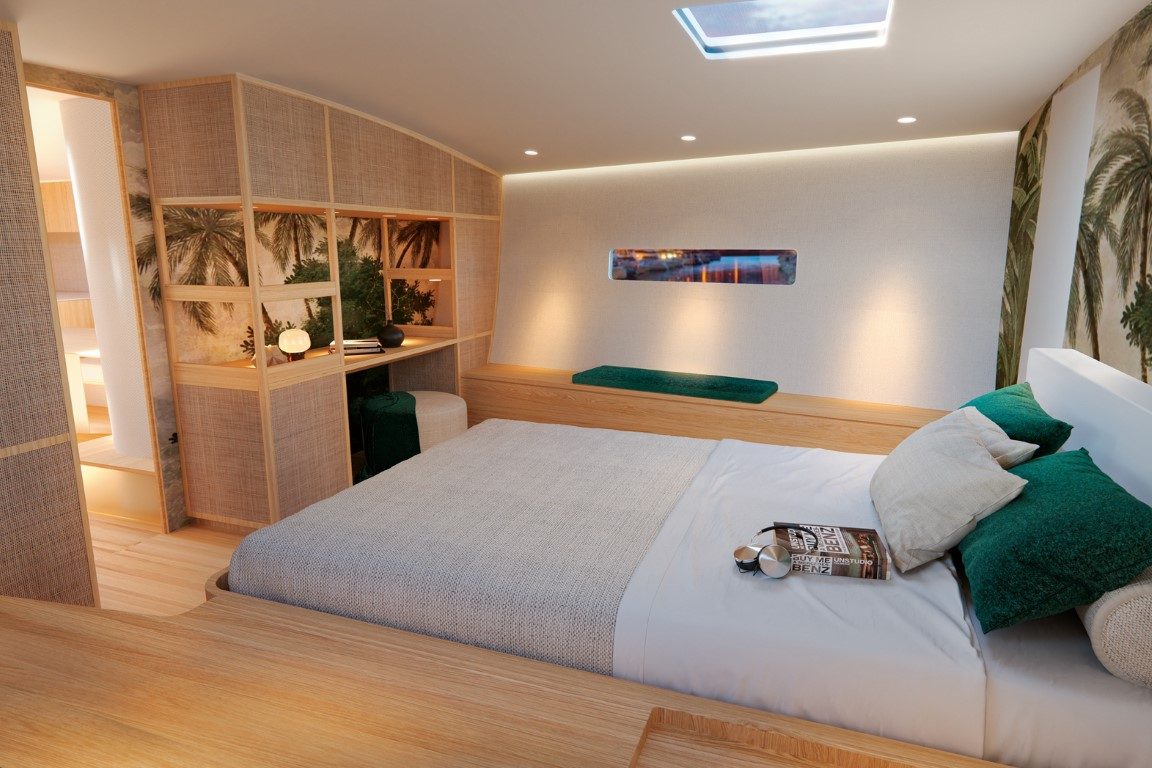 Building materials are just one part of this complex environmental equation, of course. The Vaan yard itself uses renewable energy, and offsets third party emissions caused on their behalf. And there’s barely a boatbuilder out there who isn’t trying to reduce the amount of waste by using resources more smartly.

“Our current project is a 20m power catamaran that has 1,000m2 surface area,” says de Mey. “That means we will probably go through at least 1,750m2 of vac bag plastic – let alone peel ply, flow medium, tubes and so on. Eden Park has an area of 1,500m2! The amount of plastic that goes in our bin really is horrendous.”

Speak to some experts, though, and they’ll tell you the way the yacht is built is small beer compared to the way it’s used. A decade ago, Amsterdam naval architects Dykstra were called in by Greenpeace to assess the relative merits of building Rainbow Warrior III from scratch versus refitting an existing boat. 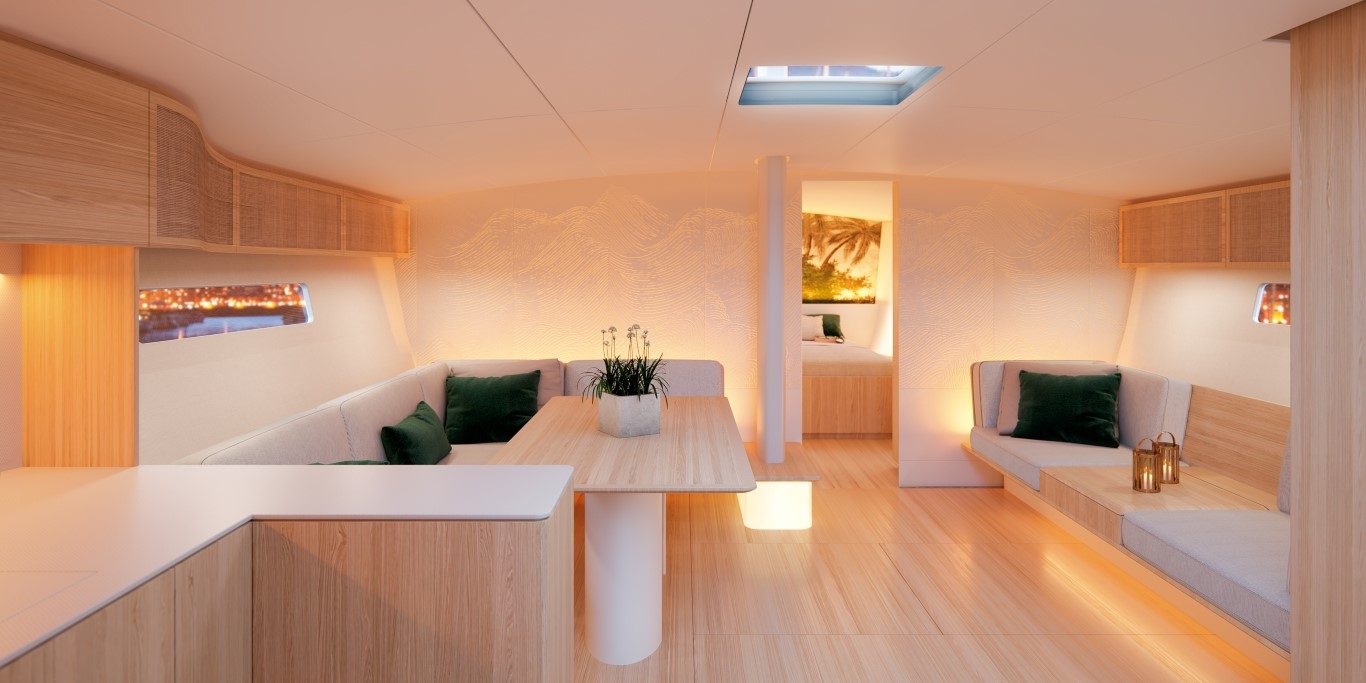 “The study showed that 90% of the impact on the environment came from the 5% of the time the boat spent motoring,” says Dykstra MD Thys Nikkels. “A new boat that is more fuel efficient soon outperforms a refit in terms of carbon footprint.”

So a truly sustainable boat needs to be a really efficient sailer, to maximise the time you spend using wind power, and to lessen the effort required from the engine when you do fire it up.

Friedrich Deimann is optimistic. “I expect to see 60ft-plus boats made out of natural fibre composite by mid-decade, and using up to 100% bio-resin systems. We hope that in 30 years, there will be technology that can decompose the product in a cost-efficient fashion.”