Des and Barbara’s Pelin Liberty PepperJack is a testament to determination and hard work.

PepperJack began life around about five years ago in a shed on the couple’s Kerikeri orchard. It spent the first year in the shed upside down, before the kiwifruit orchard was sold and the partially-built vessel was moved to their new property.
Des undertook most of the initial work on the hull, which comprises two skins of 9mm marine plywood laid diagonally over treated pine laminated frames. Two skins of 6mm marine plywood are used for the topsides, stringers are kahikatea and all the interior varnished timber is totara. Some 130 sheets of plywood went into PepperJack’s construction and the hull and topsides are sheathed in fibreglass. 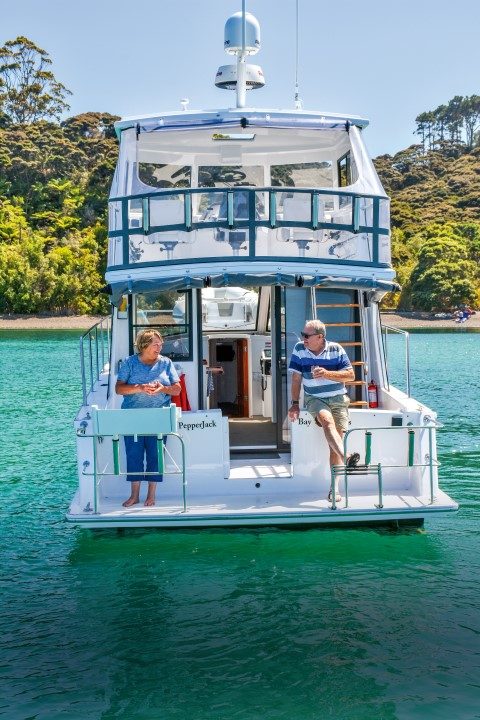 The couple chose the Pelin Liberty design because its relative simplicity and full-size plans make it a good option for a home builder. PepperJack isn’t the first boat Des has built himself: as a younger man he finished a 26-foot Ron Holland-designed keeler, the hull built by Kerry Alexander in the early 1970s, followed by a 38-foot keel yacht in the mid-80s he never launched, selling it when the kids went off to boarding school.
For PepperJack Des enlisted help from a boatbuilder friend, Mark Reynolds, mostly in a consulting role. Sadly, Mark passed away shortly after, leaving Des with a crisis of confidence early in the build, wondering how to proceed.
“Mark’s death was a great shock to us both and progress on the boat kind of stalled,” explained Des. But another boatbuilder friend, Mike Wilson, stepped into the breach, offering technical support and help. Des also had help from neighbour Howard Hughes, who made the boarding platform and fibreglass fuel tanks.
With the boat re-housed and the right way up, things moved along fairly quickly: the cabin top and coamings were added; the engine beds, a 320hp VM Motori diesel and the vessel’s So-Pac jet-thrusters were installed; and the hardtop was fabricated but not finished. SeaMac aluminium windows were used throughout the vessel. 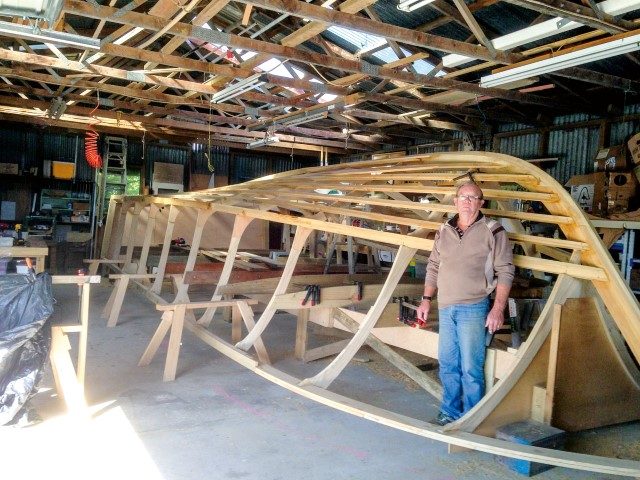 Des then got stuck into the interior, doing all the joinery himself and, with some help, mostly finished off the hardtop. PepperJack’s interior is quite traditional with plenty of gloss timber highlights, reflecting Des’ love and appreciation for natural wood. For the build’s final touches and painting, including an extension to the hardtop and a cavity transom door, he enlisted the professional help of D&D Boatbuilders (Dave and Desiree Stuart) in Kerikeri. Just about five years after the project began, PepperJack was launched in August 2019.
Boating New Zealand met up with Des and Barbara with PepperJack in Russell in late December. She looks like a Pelin, of course, but Des and Barbara made quite a few changes to the standard plans, including some alterations to the cabin profile to give them more volume inside the saloon. The windscreens are slightly more upright than shown in the plans and the interior layout was modified to better suit Des and Barbara, most notably by placing the galley aft. 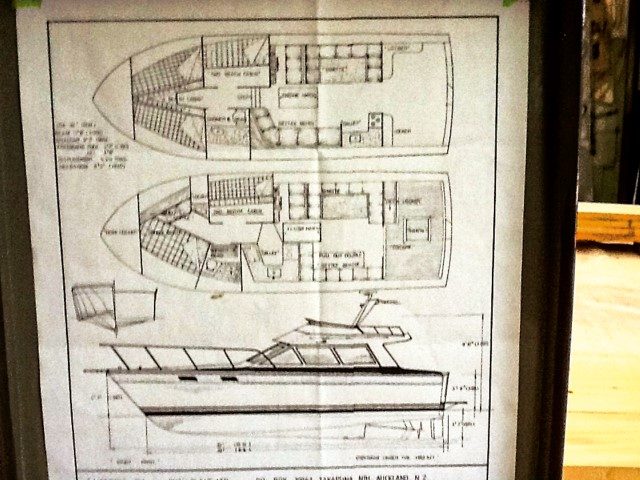 PepperJack has a two-cabin layout with a decent-sized head and a completely separate shower. The forward cabin has wide v-berths rather than a double berth, while the guest cabin on the port side has two bunks. A heavy curtain provides privacy. Both cabins have standing headroom and the décor is simple: white painted surfaces are refreshingly clean and bright.
Lifting the companionway steps provides access to the front of the engine with the main access under the saloon sole. It’s a well laid out and uncluttered machinery space. PepperJack carries 800 litres of fuel, 500 litres of water and has a 75-litre hot water cylinder heated by the engine. There’s no generator, air-conditioning or watermaker – Des and Barbara wanted to keep things simple – but a decent-sized battery bank and an inverter take care of 240V appliances, while many of the other systems, like Fridgetech fridge-freezers, operate on 12 volts. 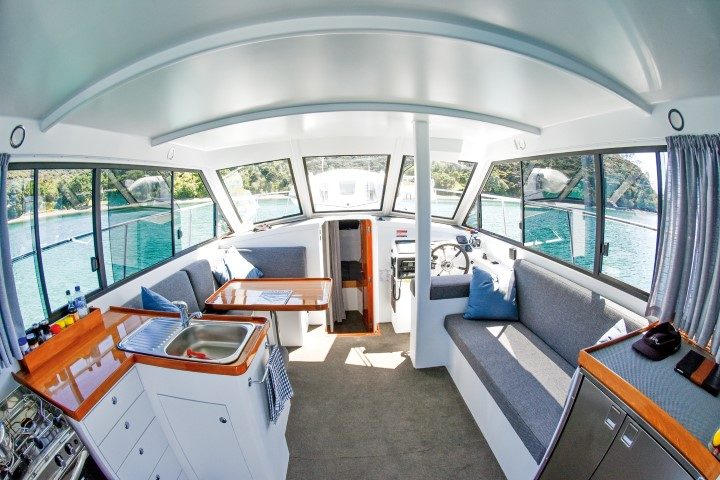 The saloon is finished to a high standard with grey fabric upholstery by Greg Hill Interiors and Coverings, which also made the covers and clears. The layout is simple but practical with a compact L-shaped galley on the port side aft, a dinette forward, a comfy settee on the starboard side, a large 12V fridge-freezer and a large flat-screen TV on the rear bulkhead.
Barbara wanted two things in particular: a decent TV and a good shower. She got her wish with the saloon TV, plus a second TV in the forward cabin, while PepperJack’s separate shower room is a luxury on a boat of this size. There’s also a Fusion stereo system, operated from the downstairs helm. 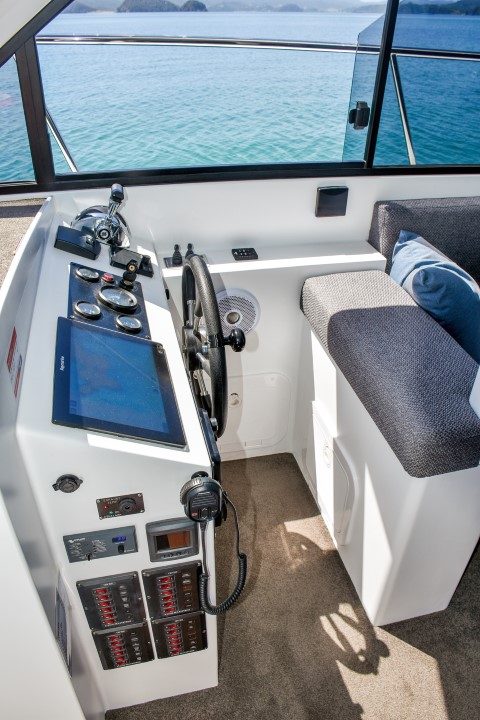 The painted joinery does Des credit, as does his excellent use of timber finishes, including the gloss-coated saloon table, counter tops and bathroom vanity. There’s plenty of headroom inside the vessel, while the white and grey colour palette, combined with large windows, ensures the saloon looks and feels spacious. Sliding side windows open wide for good air flow.
They haven’t skimped on electronics. Lusty & Blundell supplied the Raymarine MFDs, a 12-inch model downstairs and a 10-inch display upstairs, the autopilot, the VHF radio (there’s a handheld VHF for upstairs), satellite TV and Radar domes.
An AutoAnchor system operates the anchor winch remotely and Lenco trim tabs and the toggle controls for the JT50 bow thrusters, bow and stern, are situated under the sliding window. Engine gauges are analogue, but the controls are electronic.
The downstairs helm has a simple bench-style seat, but on most days Des likes to drive from the flybridge upstairs, accessed via a stainless steel and teak ladder from the cockpit. The open-backed hardtop has seating for three in individual swiveling helm seats, the middle one for the helmsman. A simple console accommodates the second MFD, AutoAnchor control, engine gauges and autopilot.
A big glasshouse ensures excellent vision ahead, there’s an opening skylight above the helm, heaps of storage under the front windows and the hardtop extension provides extra upper deck space and shelter for the cockpit. Horizontal rod racks both sides of the hardtop store Des and Barbara’s collection of snapper fishing rods; the rocket launcher fixed to the stainless-steel railing can be used to store the bigger gear. 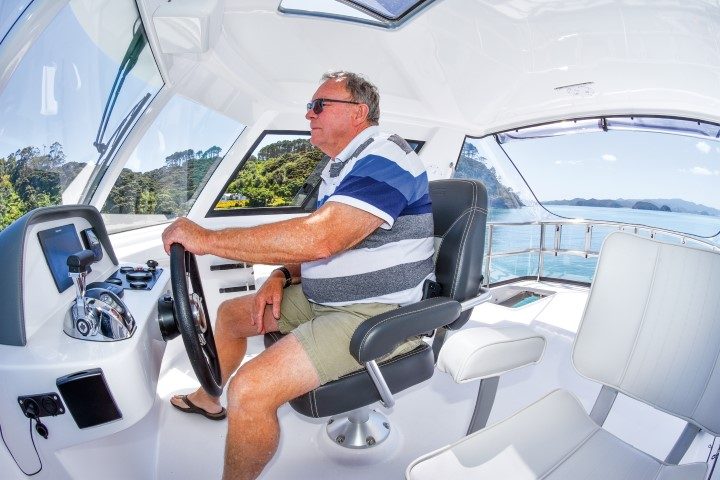 Fishing is one of the activities the couple enjoy, so PepperJack has been kitted out accordingly. Living in the Bay of Islands, they don’t have to travel far to find good fishing. And while much of their boating will be day trips, they hope to spend the odd weekend onboard, or maybe longer. PepperJack is fully equipped for longer cruises, including a good-sized Shearwater RIB on the foredeck cradle for trips ashore. An Evalift 100 manually operated davit is used to deploy and retrieve it.
The cockpit, while not large, is practically laid out, with inbuilt storage in lockers/seats along both sides, a useful lazarette, a basin and a transom cavity door that doesn’t take up cockpit space in the open position. Fishing is mostly conducted from the wide boarding platform which has sturdy stainless-steel semi-cages in both corners and additional rod holders on the port side. All the stainless work, including the wraparound bow rails, is by local specialist Phil Waddell. 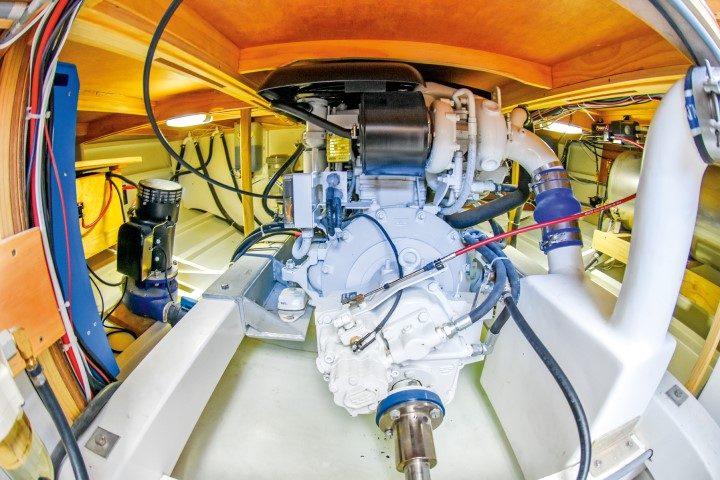 PepperJack cruises comfortably at 15 knots, running nice and level. Top speed is around 21 knots, depending on load, but she has plenty of horsepower so most of the time the engine doesn’t need to work very hard. At displacement and trolling speeds, fuel consumption is minimal, and with relatively simple systems, shaft drive and a single engine, maintenance cost should be very manageable as well.
The jet thrusters really come into their own at manoeuvring speeds, mitigating any of the disadvantages of a single screw installation. PepperJack is easy to dock and can turn 360o in her own length on thrusters alone.
Sitting up on the flybridge on a calm, early summer day, progress felt relaxed. It was quiet too: there’s a bit of engine noise to contend with in the saloon, but nothing too intrusive since the engine room has plenty of acoustic insulation and the exhaust exits underwater. Upstairs, the wash is noisier than the engine. 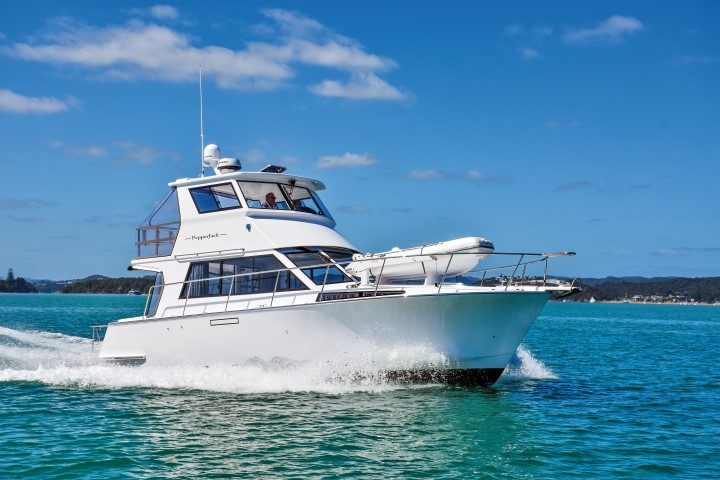 PepperJack could easily be mistaken for a professionally-built vessel – a credit to Des and Barbara. The couple were smart enough to get professional help when they needed it, but the bulk of the work is their own. That means Des knows every detail of the boat: its construction, engineering and systems. Knowing there were no shortcuts taken and no skimping on materials or equipment can only inspire confidence: Des and Barbara expect to enjoy trouble-free boating aboard PepperJack for many years to come.