Built by Auckland’s Percy Vos in 1936, the 11.5m sloop Tangaroa has returned home after a 60-year absence and, thanks to the kindness of her former American owner, will become a living part of New Zealand’s maritime heritage.

Tangaroa’s 85-year story describes a colourful, adventurous arc and her return to New Zealand is an extraordinary climax to improbable twists and turns. She spent most of her post-NZ years around the Hawaiian Islands and, as the locals there would say: “Aloha – this gal ain’t done yet.” A new chapter beckons. 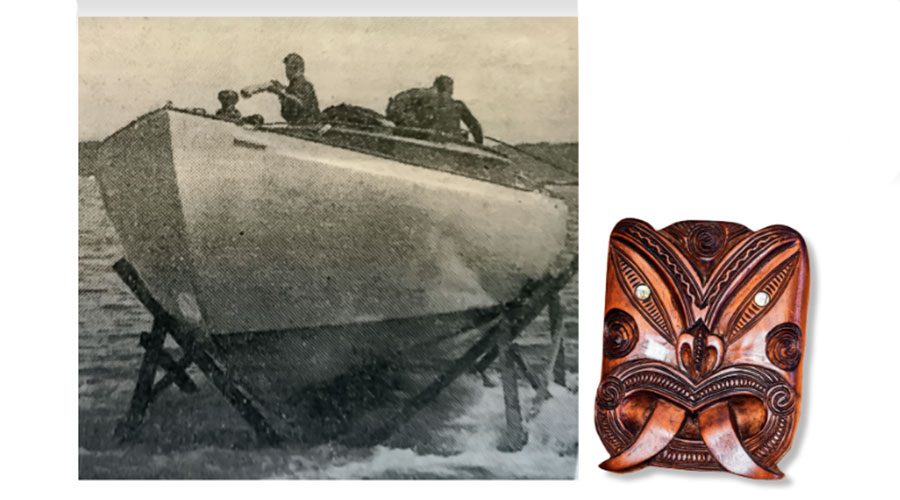 Tangaroa’s launching from the Percy Vos shed, and the carving commissioned by Jo.

She was born in Percy Vos’ shed in Westhaven’s Hamer Street, built for a Mr Jas Inkster of Bayswater. Auckland’s John Brooke designed her – he was renowned for his inexpensive-to-build-yet-exciting-to-sail yachts, and he based his concept on a larger vessel penned by Scandinavian K Aage Nielsen. Nielsen’s boat featured in a 1933 issue of Rudder magazine.

Brooke’s design was a masthead sloop built in triple diagonal plank kauri. Pohutukawa was used for her stem and mahogany for the interior, with hatches and skylight in teak. The lineage of owners following her 1936 launching is a little unclear, though we know that in 1953 one of them added a doghouse. But to appreciate Tangaroa’s unlikely career path from then on you need to settle back into your chair with a glass of your favourite syrah – and concentrate. 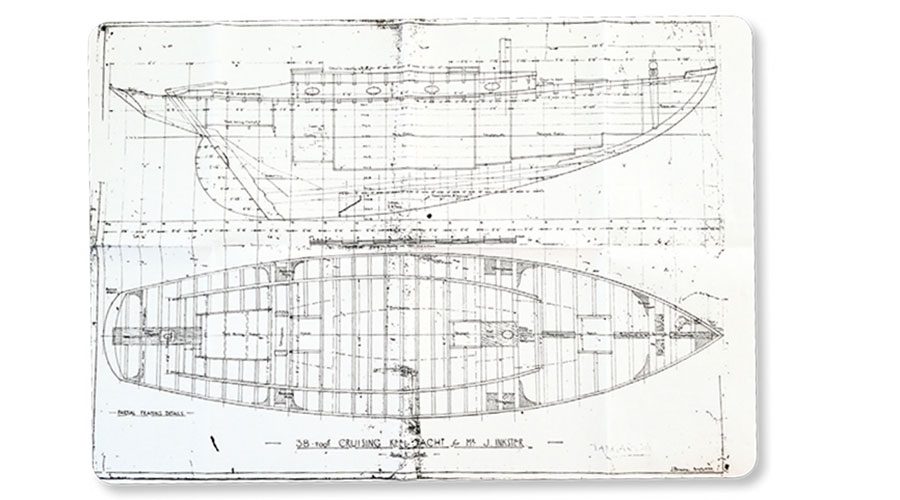 She was designed by Auckland’s John Brooke.

She departed our waters in 1961 when she was sold to a young Hawaiian couple – Stuart and Jo Byam. Though she had been raced enthusiastically by her previous owners (Messrs Bates, Stretton and Green of Auckland), the Byams intended to sail her back to Hawaii and adapted her for cruising.

This involved lopping off a significant section of her spruce mast to reduce her sail area and simplify sail handling. The surgery, says Jo, significantly cooled the relationship with the gob-smacked former owners who’d spent years optimising the yacht’s sailing potential.

Jo, it turns out, now lives permanently in Waverley (near Christchurch) – and has done for many years – and when Tangaroa was formerly ‘reinstituted’ as a New Zealand boat in May this year, Jo was on hand to fill in much of the little yacht’s unknown history. 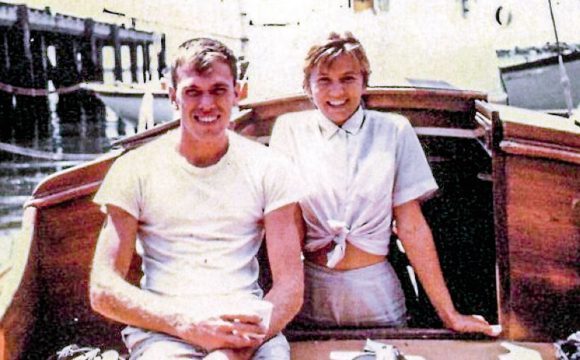 “Stuart and I met in Hawaii – he owned a small Hartley sailboat and taught me to sail – and we married. Soon after he decided – a little impulsively – that he wanted to become a farmer in New Zealand. So we arrived here to buy a piece of land. But the authorities advised us against it – and I think even he eventually realised it wasn’t a good idea.

“Instead, we happened upon the beautiful Tangaroa lying in Bayswater and decided – a little impulsively – to buy her and sail her back to Hawaii. Our voyage began with a shake-down cruise to Great Barrier Island, and from there to Rarotonga, the Society Islands and then to Hawaii. We were relatively inexperienced bluewater sailors, but she was easy to sail and never gave us any trouble.”

Before they left, Jo commissioned a central North Island carver to create a Maori embodiment of Tangaroa (the guardian of the sea) – as much a reminder of her time in New Zealand as something to keep them safe during their voyage. The carving did its job – they arrived in Hawaii in November 1962. 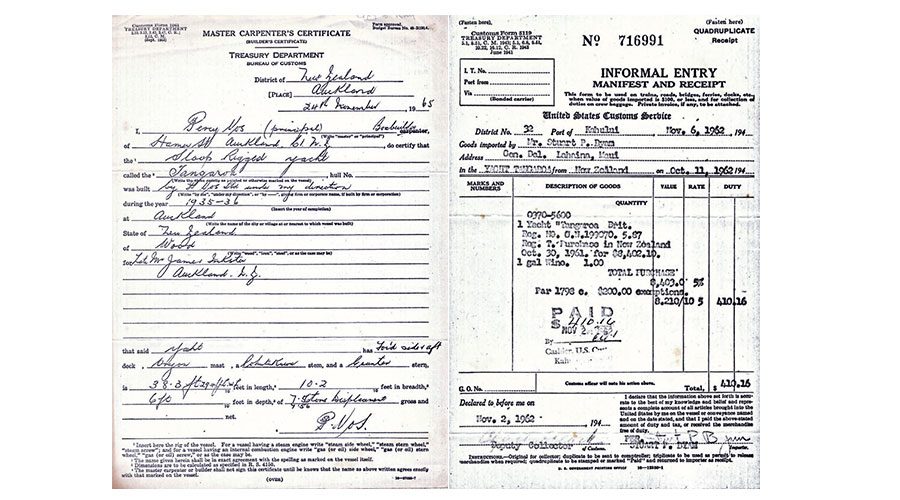 The original builder’s documentation, and US Customs form for the yacht’s entry at Hawaii.

“We had such fun introducing her to our friends,” says Jo. “Hundreds of romances blossomed on her – and who knows how many children were conceived on board?”

A year later they sold her (Jo kept the Tangaroa carving) and, after the new owners spent many years cruising between the Hawaiin Islands, they in turn sold her (in 1977) to Allan Rey Jonsson and his sailing buddy Lloyd Edward Printup. In 1978 the Byams (with memories of New Zealand still lurking in their psyches) immigrated to Waverley. Stuart passed away in 2015.

Allan eventually retired and moved to California to be closer to family. No longer able to sail Tangaroa, he had passed her on to his son, Eric. Years later, when Eric realised his and Tangaroa’s lives would evolve in different directions, he decided it would be good to return her to the land of her birth. 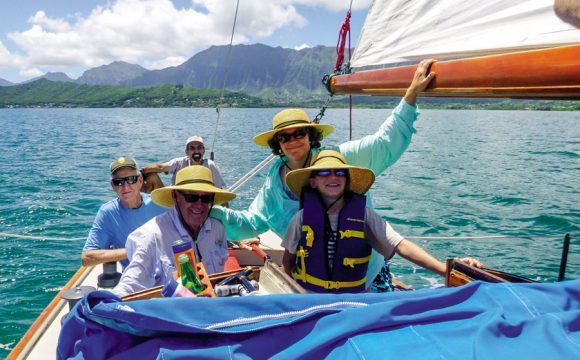 His investigation into the best way to do this eventually led to discussions with Auckland’s Larry Paul (a member of the Classic Yacht Charitable Trust, and Waitangi skipper). And the initial conversation, says Larry, was a little bizarre. It began on April 1st 2019 with his phone ringing and flashing up an unknown number from California. On the end of the line was the very chipper voice of Eric Jonsson.

“I have been reading your website (classicyachtcharitabletrust.org.nz),” said the voice, “and am most impressed with the work being done in New Zealand to restore and sail historically significant classic yachts and launches.

“My family has owned a New Zealand classic yacht – Tangaroa – since 1977. The yacht is based in Hawaii where our family lived. Dad has now moved to mainland USA and is no longer able to sail her. We believe now is the time for her to return to her roots. Would the Classic Yacht Charitable Trust be interested in taking her on?” 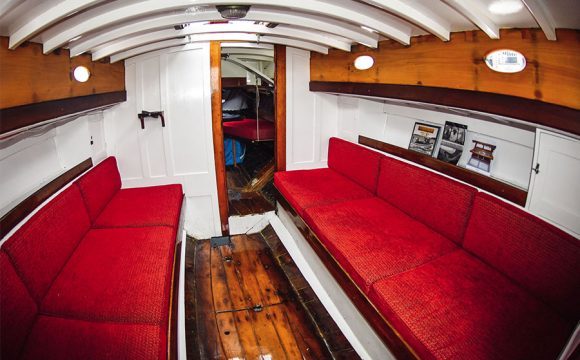 Tangaroa on the way to Wayne Olsen’s shed, and her rejuvenated saloon.

Larry admits to thinking – ‘is this an April Fool’s prank from a mate or a genuine attempt to return a significant piece of New Zealand’s wooden boatbuilding history to New Zealand?’

“Eric, we have quite a fleet of vessels in the Trust and would be unable to take her on, but I would be happy to help you meet your father’s wishes in having her returned to New Zealand. The best way might be to identify an interim local skipper with a passion for classic wooden boats and assist in recommissioning and sailing her in New Zealand until a long-term custodian can be identified to care for her.”

Eric and his dad were most agreeable to this strategy and the lengthy process of building a shipping cradle and organising shipping from Hawaii to Auckland was put in motion. Tangaroa left Honolulu in November 2019 and arrived in Auckland on December 8th. She was trucked to Horizon Boats in Stillwater where Wayne Olsen replaced her decks, tidied up the cockpit lockers, rebuilt and repaired hatches and skylight and added a galley, head and holding tank. 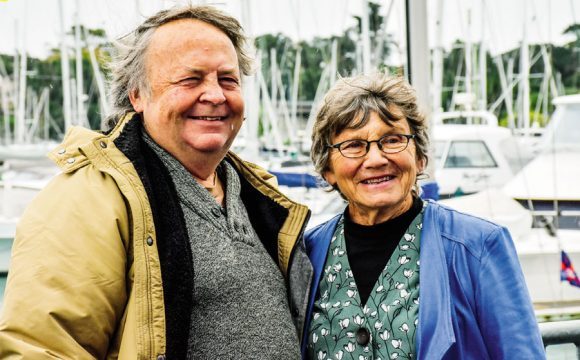 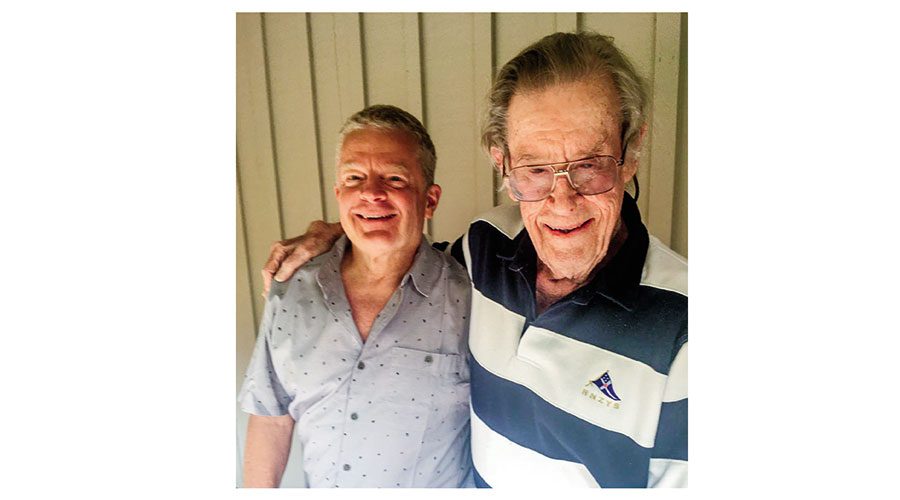 Eric and Rey Jonssen – “it was time to return Tangaroa to her roots.”

Tangaroa’s formal handing-over function took place at the RNZYS in May. It was attended by Miles Ostick (Percy Vos’ grandson), and Jo Byam, who used the opportunity to reunite her precious Tangaroa carving memento with the boat. “I think it’s fitting that it now lives with the boat.” Eric and his dad had hoped to be there for the celebration but Covid-19 interrupted their plans.

The little sloop has now fallen under the custodianship of skipper Corey Rademaeker, who carried out the paint work and has spent considerable time re-rigging, completing the finishing work and fitting her out. Corey has built a small racing team and will see Tangaroa competing in Classic Yacht Association events. She is currently berthed at Gulf Harbour Marina.

Perhaps the final words in this prodigal daughter’s story belong to the magnanimous Eric. His well-wishing correspondence ends with this salutation: “The next chapter in Tangaroa’s life has now begun. To the new custodians – sail her, sail her, sail her…” BNZ

THE SINCLAIRS OF LYTTELTON PART 3 - A fascination with lateen rigs