When Maritimo supremo Bill Barry-Cotter finally located his long-lost family yacht Katwinchar it launched a new adventure for him and her, writes Kevin Green – beginning with the 114-year-old vessel entering the recent Sydney-to-Hobart race.

Found as a derelict hulk by Barry-Cotter’s friend Peter Jenkins, there followed two years of painstaking work on the 32-foot hull, undertaken at the Maritimo yard.

A specialist team formed for the job restored this 114-year-old yacht to beyond her former glory, in fact to Category 1 race requirements, which allowed her to take part the 2019 Rolex Sydney-Hobart.

Standing beside her at the Cruising Yacht Club of Australia in early December, Barry-Cotter told me it had been a challenging project but greatly helped by his team. “Katwinchar was notable for being a very different style of boat, with a ketch rig, and very fast compared to others around at that time.”

His father Frank had sailed her when he was a boy. Frank owned her for five years from 1960 when he sailed around Pittwater and Sydney Harbour. “I’d been searching for the boat for years so it was good to finally locate her lying on a mooring at Hexham near Newcastle, in a very dilapidated state,” he says. His experiences on Katwinchar encouraged him to become an apprentice boatbuilder – he went on to start some of Australia’s most iconic brands: Mariner Boats, Riviera and finally Maritimo.

Built by Ricardo Gilbey Watney of Watney Brewery fame near Gloucester, England in 1904-05, Katwinchar was named after his children Katherine, Winifred and Charles. With her brewery heritage it’s appropriate that her spinnaker today sports The Black Hops Brewery branding. Black Hops is a boutique brewery on the Gold Coast and a tenant in one of Barry-Cotter’s commercial properties.

“We looked for the most highly qualified staff to work on Bill’s labour of love,” says Candler. Other notables on the project included legendary Hobart sailor Michael Spies.

The three men who sailed Katwinchar 14,000 miles from England in 1951 to begin a new life in Tasmania were Eddie Mossop, Dennis Tanner and Bill Bartlett. They’d departed the River Avon in the west country of England, without any ocean-going sailing experience. Instead, they stuck a sprig of white heather on the saloon bulkhead for good luck. It worked – they safely navigated the Atlantic, then the Pacific via Panama before reaching Australia.

Skipper Mossop described their Atlantic landfall thus: “Owing to continuous bad weather I had only obtained one meridian altitude observation in six days. Without wireless and not knowing the daily rate of the watch since it had altered, there was no means of accurately telling how far west we were. It was worrying to be running in on a strange coast in thick weather, heavy winds and seas, and only a DR position. 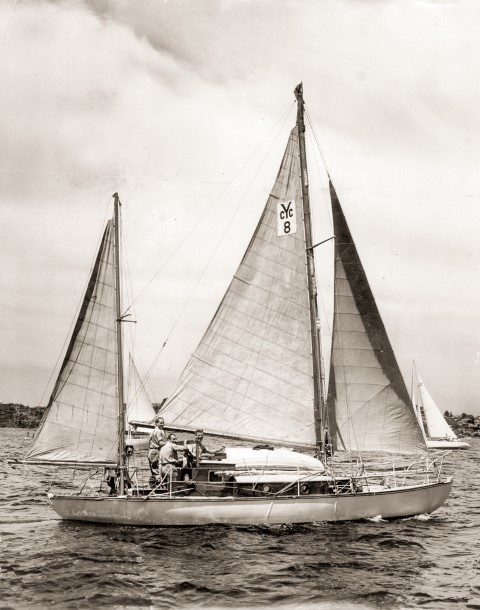 “At 08.00 on June 24 1951, we sighted land and identified it as Tobago. When I fixed our position we were only six miles NE of our DR position. Relieved, we sailed on towards the Bocas – the entrance of the Gulf of Paria and the Port of Spain, Trinidad.”

They arrived in Sydney in late 1951, exhausted and hungry with only a few canned victuals left after 196 days at sea. Their food shortage was ironic, given two of them were professional fishermen and they’d dragged lures the entire trip yet never caught a fish.

But their November 1951 arrival was timely, as it allowed them to compete in the fledgling Hobart race started by fellow Englishman Sir John Illingworth in 1945. During the race they were blown eastward by a 60-knot gale off Maria Island on Tasmania’s east coast, forcing them to abandon the race and motor inshore using their converted Austin 7 car engine and then to Hobart via the sheltered Dunally Canal. Eventually, their boat was sold to Frank Barry-Cotter.

The Maritimo team stripped the double-ended wooden hull, removed the deck and started with a bare shell. “We then did a full measure of the whole boat, put it through our design software programme and found that it was already the most efficient design for a boat of that size and weight. The only modifications – to the keel and rudder – were done to comply with stability requirements,” says Candler. 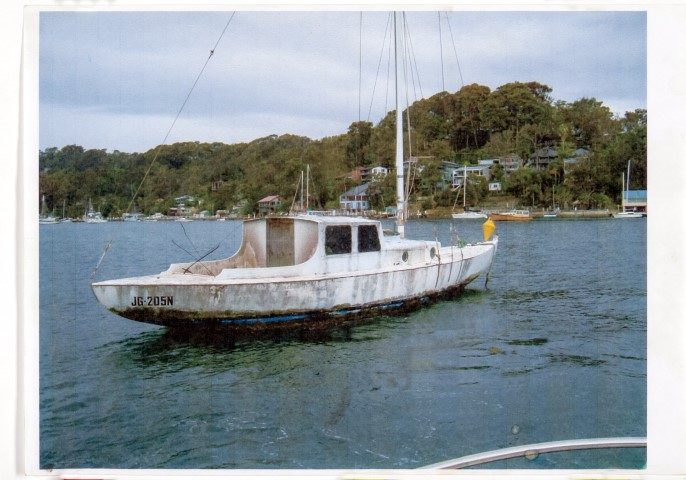 The restoration involved replacing the rotten English oak used in the stem, keel and sternpost. It was then rebuilt close to the original, particularly using the same timbers that were first used. All the hull planking – Canadian cedar – is original.

The wooden shell was then sheathed in fibreglass. During my walk-through I noticed glassed ribs, all beautifully finished in two-pack paint. Originally a centre-boarder, the hull was remodelled to incorporate a fixed bulb keel, which allowed compliance for Cat 1 requirements and added stiffness.

The original rig’s wooden spars were replaced by new, tapered, keel-stepped alloy masts and a bowsprit was added. The sail plan continues to use a symmetrical spinnaker but the great advantage with the ketch rig is, of course, the spread of canvas across the hull. This includes a mizzen staysail as well, so light airs favour Katwinchar. 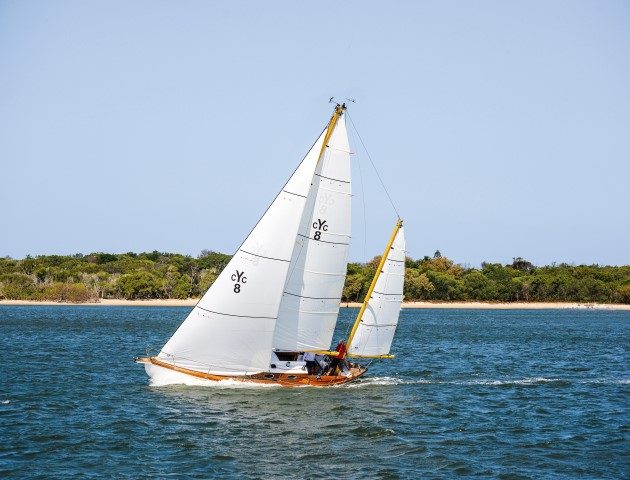 Electric winches are also installed but weren’t used in the 2019 Hobart, where they competed in the specially-formed Veteran Division with several other classics such as the S&S 34 Kamatsu and the larger Fidelis.

Winning a Hobart is the holy grail of Australian racing, so having a successful sailing master in the tall shape of Spies meant the Katwinchar team were serious. Spies memorably skippered the record-breaking Nokia in 1999 and has campaigned on some of the most successful modern racers including the TP52 Ichi Ban and others.

Surprisingly spacious, thanks to the tall doghouse and fairly deep hull, there are pipecots forward and two quarter berths accommodating the six crew. Among them was Olympic sailor Scott Kaufman and local identity Robert Case, along with navigator Murray Spence. The pristine woodwork done at Maritimo includes a neat fold-down navigation table with a B&G plotter. Beneath the companionway is a small generator set, and the galley on starboard sports a large microwave.

From the media boat I watched Katwinchar sail out of Sydney heads at the tail end of the 157-boat fleet, powered up by a light nor-easterly following wind that saw eventual line honours winner Comanche surf south at 26 knots. Steering on Katwinchar, Spies was more than happy with its eight knots of boat speed in the lumpy conditions. 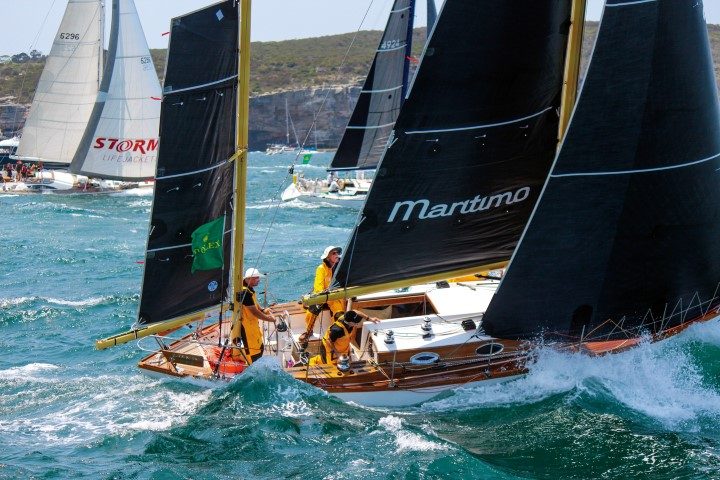 So successful was that first two-day leg down the New South Wales coast that Katwinchar became overall handicap leader, in line for the prestigious Tattersall Cup. But conditions softened further south, where the coast was blanked by smoke from bush fires – a timely reminder of the triviality of yacht racing.

Southerly winds swept across the Bass Strait, slowing the smaller boats in the fleet. Most were east of the rhumb line seeking a better angle of approach to Hobart, yet the plucky Katwinchar with ketch rig was going well at 7 knots, and ahead of its Veteran rivals on handicap.

Across the dreaded Storm Bay and finally up the Derwent the little ketch sped, finishing the 628-nautical-mile race on Monday night in a time of four days six hours. A delighted Kendall declared on Constitution Dock: “Amazing actually, really amazing.”

Ill health had prevented brother Barry from doing it, so he’d done the race for his brother, and in style. “It’s been a privilege to be involved in the restoration of the boat with my brother. To race it with guys like Michael [Spies], and the rest of our crew has been absolutely fantastic.”

The crew had to overcome frustrating lulls, bursts of belting winds and energy-sapping heat that saw temperatures soar above 40-degrees C. For the seasoned Spies, who now has 43 Sydney Hobarts under his belt, this year’s race reminded him why the event is so hard.

“It was a challenge. Storm Bay [on Monday] just destroyed us – and the Derwent – it’s the reason why this is called one of the most challenging races in the world. You only had to be out there today, from zero knots to literally 40 knots.”

Reflecting on Katwinchar’s win I recalled the last words Bill Barry-Cotter said to me back in December when I prompted him to share business philosophy for the benefit of the crew: “Never give up and just keep on going no matter what setbacks you have!”