Boats can be beautiful objects – works of art in fact. And when they are scale models, hand-built for the joy of replicating a loved vessel, they are something exquisite indeed. Story by Zoe Hawkins-Wilde.

Aucklander Bruce Tantrum has created more than 200 scale-models of real-life vessels in his lifetime. He works from his garage below a block of apartments in Auckland’s Orakei. From the garage he has views of the Hauraki Gulf towards Rangitoto Island. And inside it, he brings scale-models of boats to life. 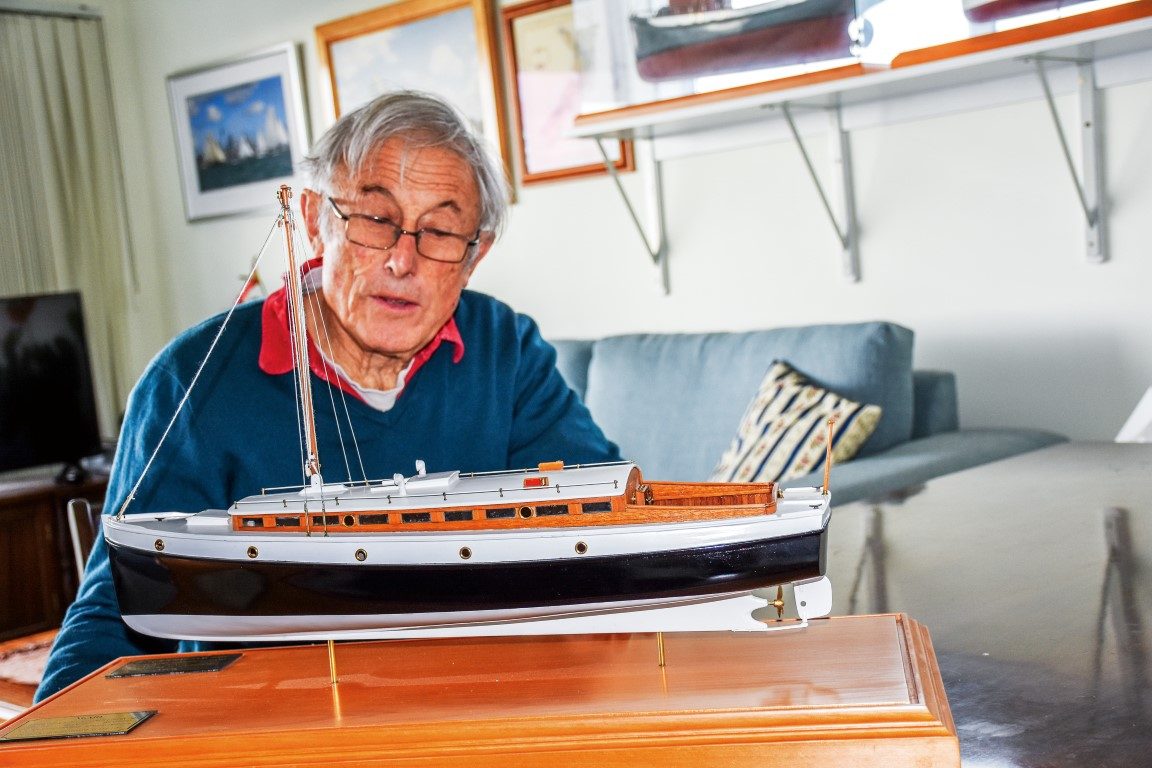 His apartment is full of replicas he has crafted. He knows the history and detail of each boat intimately – possibly because he has plenty of time to ponder it while he goes through the painstaking, months-long process of creating one.
Bruce was one of five brothers, born in Levin and raised in Lower Hutt. As a youngster he became fascinated by boats. His first boat was a 12’6” clinker dinghy purchased by his father, Jack, for fishing on Wellington Harbour. After retrofitting a centreboard case, rudder and centreboard, he was sailing.
On a family camping trip in the tropical north Bruce discovered Auckland for the first time and knew, with his love of yachting and aspirations to be a boatbuilder, it was where he would live. Unfortunately, timing worked against him.
Raised in the shadow of WWII, he visited the waterfront area that is now St Marys Bay in Westhaven in search of an apprenticeship but was told the boatbuilding industry couldn’t offer him the opportunities he needed. Instead, he became an apprentice housebuilder but kept his dream alive by building a keelboat: a 30-foot Van De Stadt design called Temptation. “A 30-footer before I turned thirty,” he quips.
After crewing in the 1972 race to Noumea, he was inspired to sell Temptation and build a vessel capable of offshore racing. Paramour was a 36’ John Lidgard-designed sloop. “I asked John for a boat I knew I could afford and had room for. She was big enough for my family,” says Bruce.
Even at that stage Bruce was playing with scale: “Before I started building I looked up the metric equivalent of 36 feet. It was just under 11m. So I built Paramour at 11m, which is exactly 36 foot and 2 inches.”
She was clearly a very successful boat for Bruce: he only sold her very recently after 45 years of ownership to a couple who have taken her to the Far North to live, and his new boat, purchased with wife Shirley-Ann, is a very practical bridge-decker named Menai.
“That is the next chapter. We will go cruising. At our age it’s prudent and seamanlike to always be in an environment where you can manage whatever the weather does. That involves strength. A launch is a practical, logical answer – as long as it’s wood, floating and attractive.” 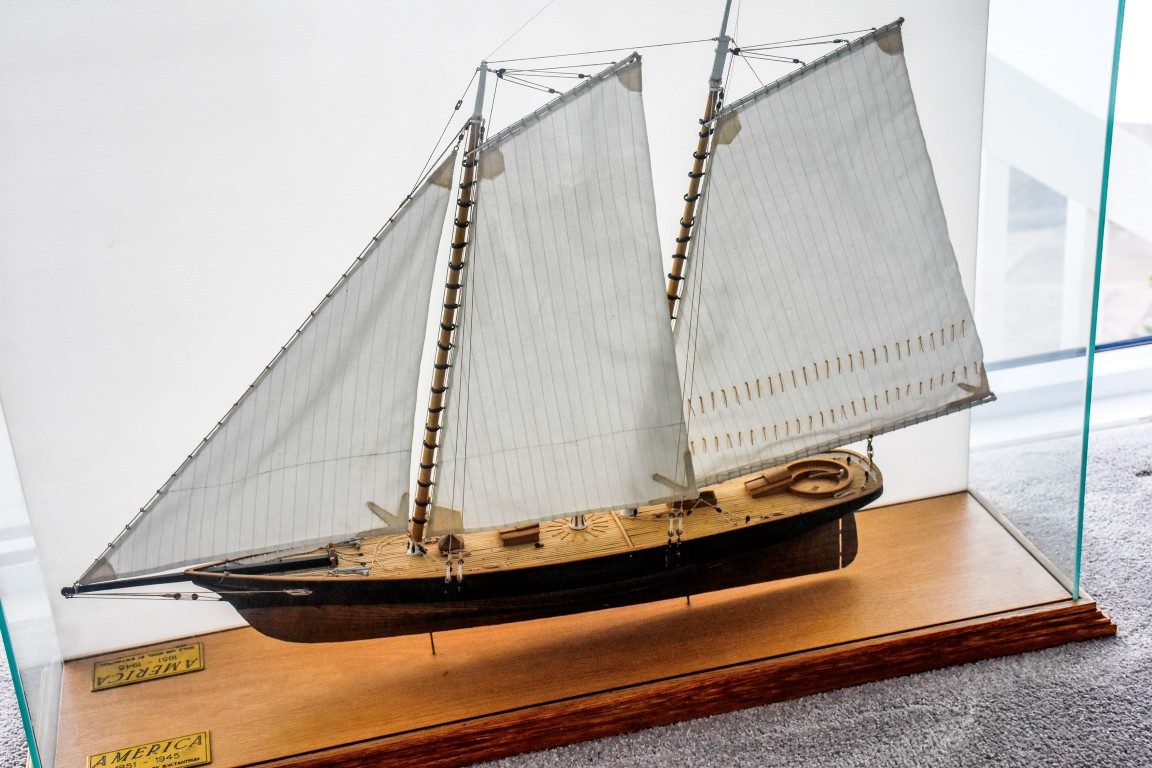 Model building has always appealed but he put it aside for decades while providing for his family and sailing, only picking it up again 20 years ago.
His first serious model was kitset but then he started building off plans sourced from his collection of maritime books – among them the nautical classic Racing, Cruising and Design by Uffa Fox.
Enlarging the plans by scanning and printing them to the size he needs gives him all of the information he needs to create a model. The scale varies according to the size of the real-life boat and he admits it can be difficult to get a sense of the boat from its scale. 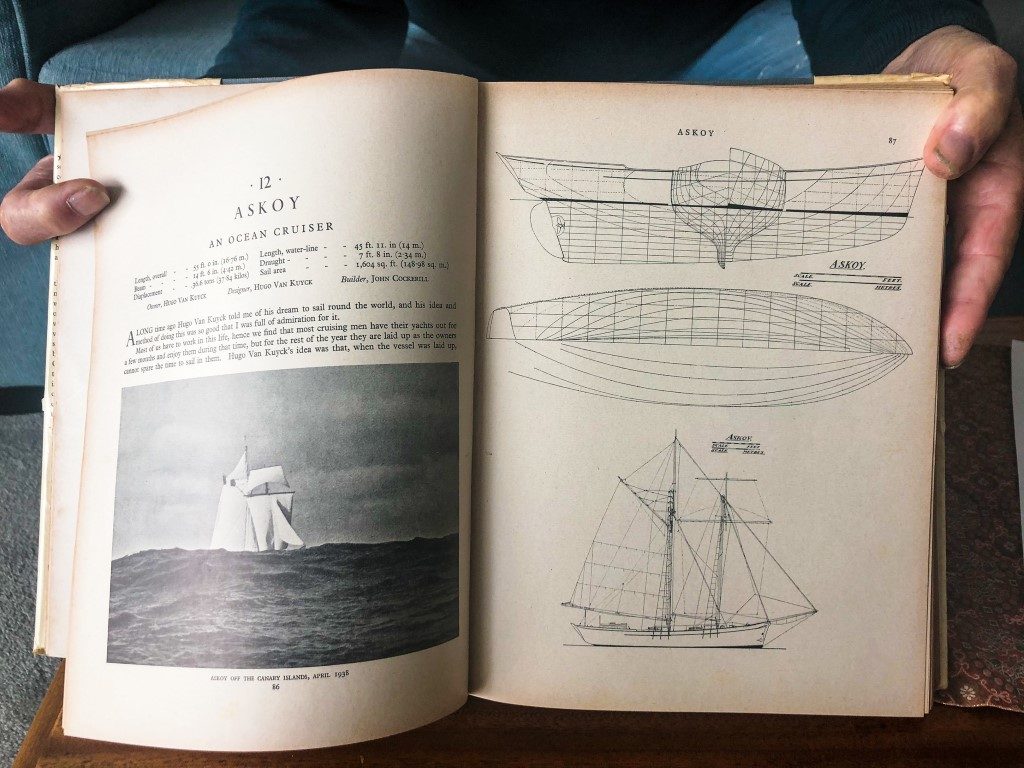 The model in his living room of the first America’s Cup winner, the 100-foot America, is the ideal scale for the size of that particular boat. “The plans show the shape and form of the boat. Then it’s a simple matter to build a model,” he says.
Once he has the lines, he distils the information to create the profile shape of the vessel by cutting ply exactly to the scale he wants for the model. Next come the sections – like a rib cage – also created in ply.
He builds two halves that are precisely identical but opposite and then, after planking, glues the two halves together.
Some of the materials – such as the demolition kauri he uses for masts – are sourced from discarded painted plank shelves he obtained while still in the building industry, although his supply is now running low. But a great deal of what he needs is available commercially. 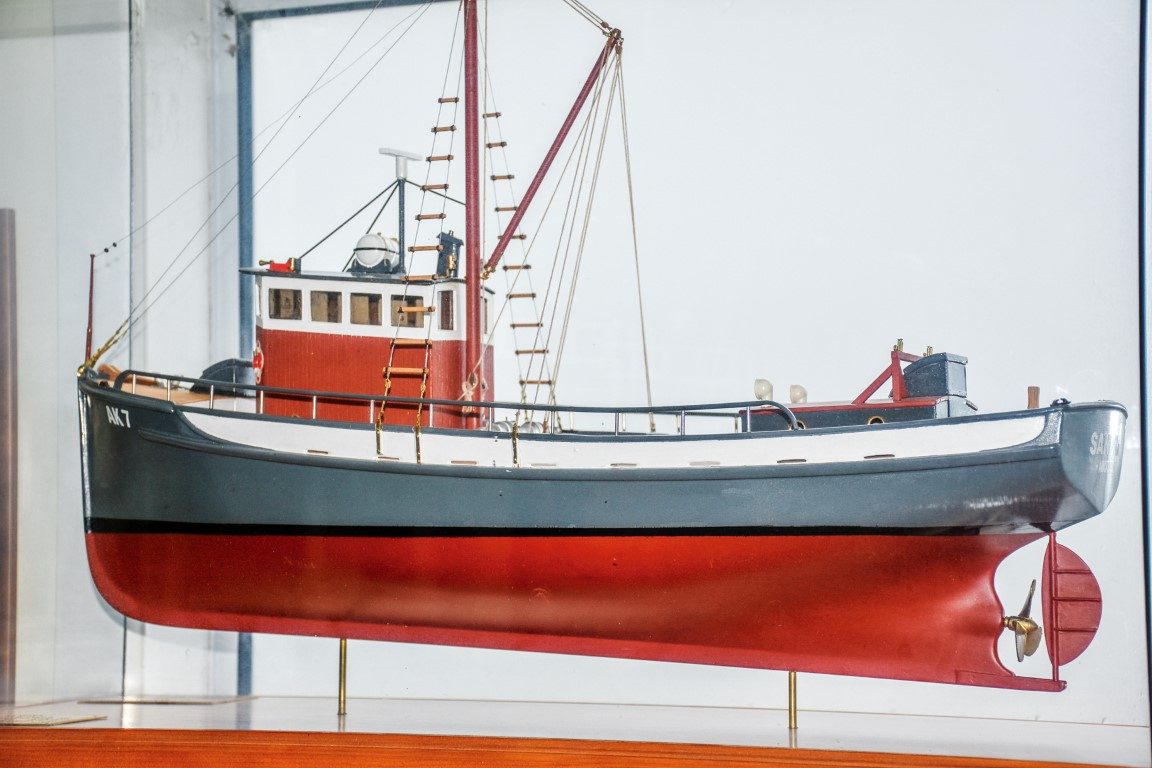 “Model making is a global industry and the materials for building – including the planks and very fine plywood – mostly come from Europe,” he says. The spars and rigging are built by hand – sails are often made from offcuts sourced from his wife’s sewing box. Blocks and hanks are ordered from Europe.
Bruce is concerned about sourcing what he needs following global supply disruptions related to the Covid-19 pandemic. “The industry has shrunk and getting it is almost impossible,” he says, explaining that the market is now too small for New Zealand shops to carry stock and it’s becoming more difficult to find special items.
“Model making from scratch is difficult. You can buy kitsets but then you’re constrained by what they have.” 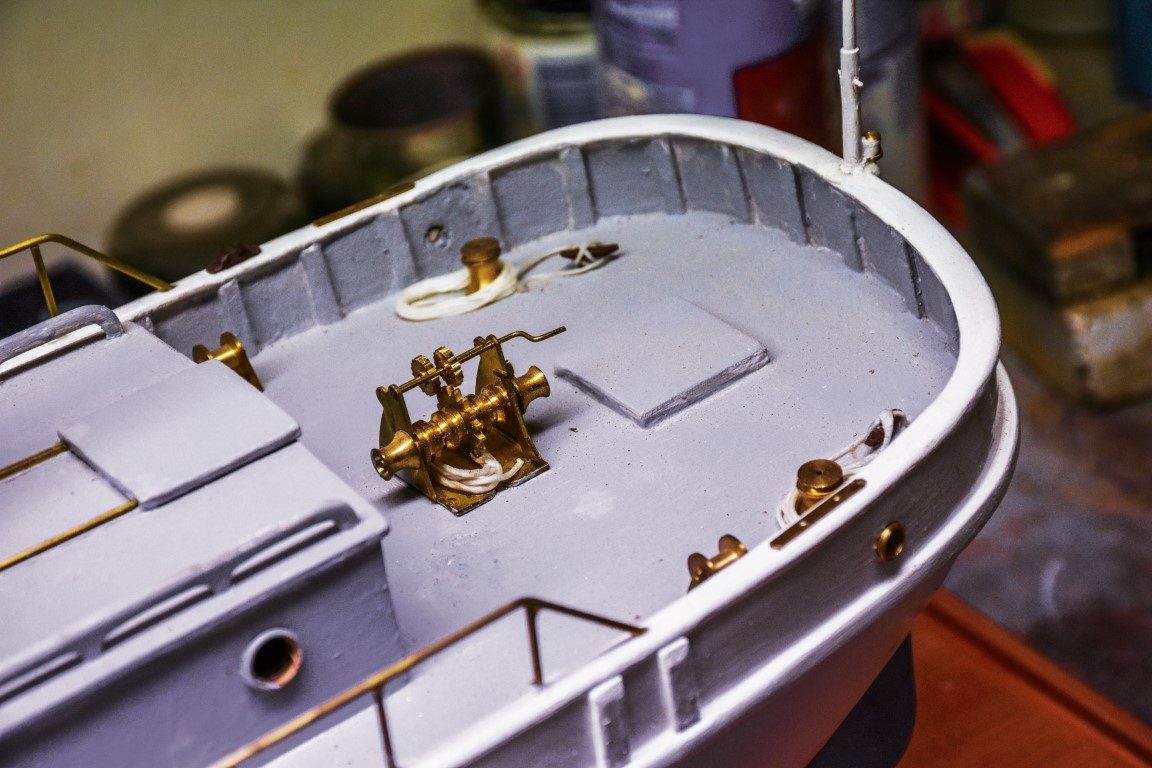 All the models that Bruce builds are based on real vessels, though he has only been aboard a few of them. His starting point can be a boat that he admires and wants to build, and needs to find the lines for, or it can be a boat from a book that he already has the lines for.
“I build them because I admire them. In a global sense they are beautiful examples of significantly inspirational boats and I want to build a fully-detailed, totally accurate model for the satisfaction of creativity. It’s like a painting or poetry that you can revisit over and over. But it’s also a historical record.”
Bruce has no idea how long it takes to build each boat (or even how many he has built, although he estimates 200) but Melodean, nearly completed in his workshop, and the third he has created on commission for the same boat owner, was started six months ago.
“You can’t create something of worth in five minutes. It’s not like some modern art. It’s not the way it’s done.”