Professor Robert Julian Scott, locomotive engineer and head of the School of Engineering in Christchurch, cast a long (and broad) shadow over New Zealand yachting of the late 19th and early 20th centuries.  By Harold Kidd.

Last month I left the good Professor and his yacht Yvonne “jilling about” at the Otago Harbour Heads just on dusk on Christmas Eve 1909. In 1928 Scott wrote about the wild events of that night in an article in Yachting magazine. Yvonne was one of nine entrants manoeuvring for the start of the Otago Yacht Club’s Rudder Cup Ocean Race to Oamaru and back. There were a hundred miles to go and an uneasy calm, a faint southeasterly air and a light drizzle. 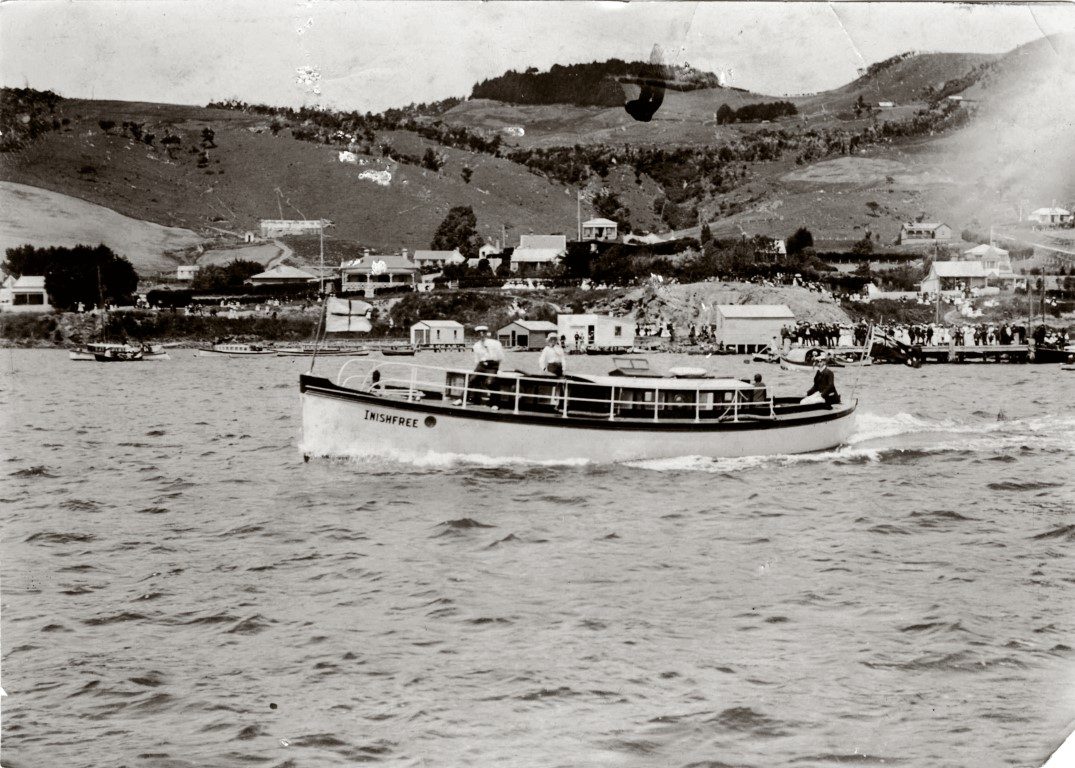 Now the starting boat, Commodore A.C. Hanlon’s big launch Inishfree, with the Blue Peter flying, made for the entrance. The nine yachts followed, running before the light breeze. All were carrying every inch of canvas they could set, slatting about in the oily swell kicked up by the last of the ebb at the entrance.
Even though the sky was blackening to windward, it was thought to be only rain. As they lined up outside the Spit between the pilot beach and the mole the larger yachts sheeted home their gaff topsails as the five-minute gun fired. At 7.15pm Inishfree fired the starting gun.
But, just as it did, the southeast breeze gave way to a swirling southwest line squall that burst down and lashed the surface of the water into foam. The squall was so sudden that it might have been fired out of the starting gun. The sea became a raging inferno of stinging spindrift.
The last of the ebb tide over the bar now heaped the ocean swell into rollers from the crests of which the wind streamed smoke-like streaks of froth before a torrential downpour of rain lashed them flat. The nine yachts were scattered hither and thither as the force of the blast drove them to leeward. They crossed out of sight over the bar in a blur of driving rain and flying spray. `

Pera crossed the line first and succumbed instantly. Her mast snapped off below the jaws of the gaff and went over the side with the sails in ribbons. Inishfree had good freeboard but the waves were driving right over her. She went to the assistance of Roma which was floundering and towed her to shelter.
Scott on Yvonne was concentrating on the start. Suddenly he saw a commotion on the big Logan yacht Iorangi abreast of him. She came up into the wind, the crew scrambling to douse the topsail and flying jib. Looking back up-harbour the Professor saw the wall of cloud, sand, spray and debris almost upon him. He jammed the helm down and reached across to the eastern side of the channel and went about to port to lower the topsail which had been set on that side.
Moments later the blast was upon them. Although the jib sheets had been slackened, the jib blew out and flew downwind like a puff of smoke. Yvonne heeled down until first the rigging screws and then the whole of the lee deck to the mast disappeared under water. She became completely out of control and pig-rooted down by the head.

The tiller was useless. She would neither pay off nor come into wind. She tore west across the narrow entrance channel, practically flat on her side, trailing her boom, a rooster tail of water cascading from it. From out of the gloom and driving spray, Iorangi swept wildly across Yvonne’s bow just a few feet away.
In Scott’s words, “Then came a wild cry from those forward, ‘The mole!’ Though by this time the peak purchase had been cast off and the mainsheet eased it was evident that she was not paying off fast enough to clear the mole over which a tremendous sea was now breaking. At the last moment, with, I think, some idea of running the vessel up as far as possible, I put the helm hard down and she struck heavily square onto the mole. Her head rose high in a sea that broke over forward. This was followed by another sea amidships but, hove down by the wind on one quarter and thrown ahead by the break on the other, she still drove on.”
“Glory be to God, she ain’t stopped yet!” yelled old Sam.
“Then a sea broke over aft, completely smothering us; her bows disappeared and her stern rose high into the air and she suddenly came up on an almost even keel. She had taken her seven feet of draft across fifty feet of rubble wall awash in the breaking sea!” 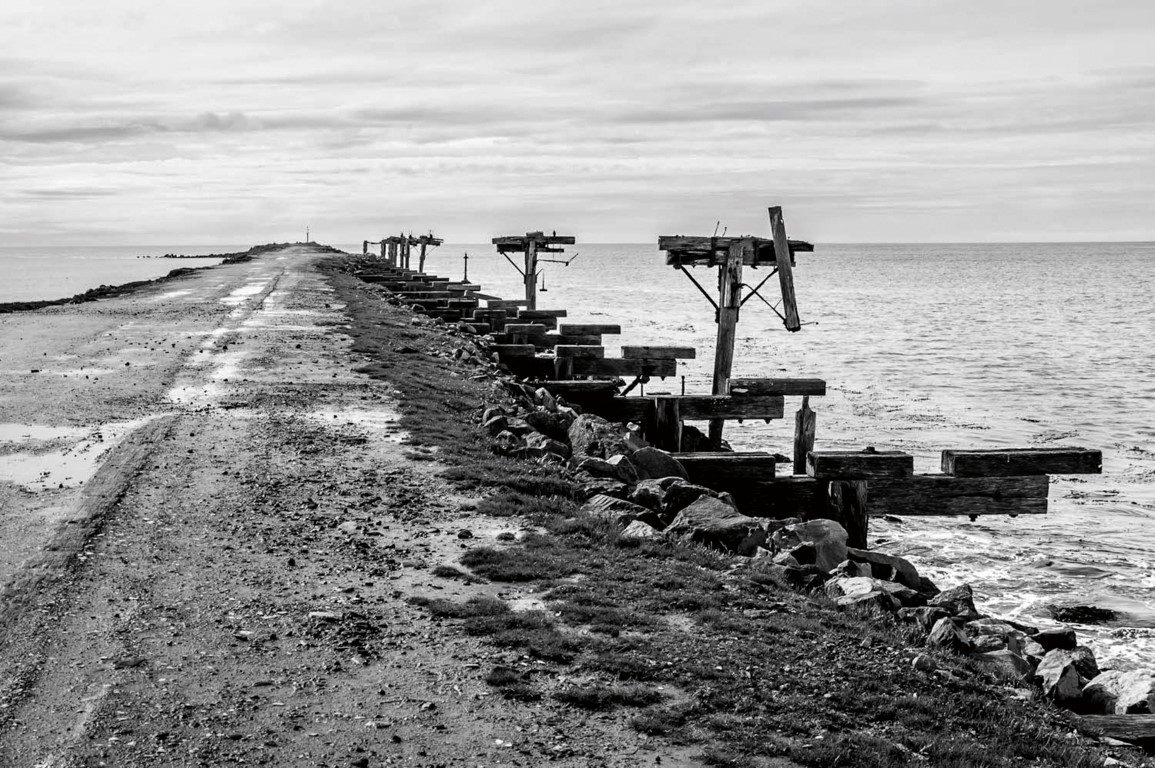 Somehow, the seas had carried Yvonne between the jutting teeth on the mole, the remnants of the huge piles driven to support the railway used in its construction 25 years before.
The report in the Otago Daily Times a few days later told the story as seen from Inishfree: “Yvonne, lashed by shrieking wind and water, her counter pointing heavenwards, she appeared to be about to drive her bows against the mole like a battering ram. Then (it seemed incredible) she was lifted on a great lead-coloured surge and was tossed like a cork on her beam ends to the other side. She had jumped the mole! Then Professor Scott luffed in the lee and kept her head to wind with all sails a’shiver until the first lull when he squared away and ran for open sea with the southerly howling at his heels.
“Coming down harbour Yvonne had been a pleasure to contemplate with her fresh paint, spotless decks, snowy canvas, and running gear rove with brand new manila. Now her sails were split and her gear harried, and she looked like a wounded bird amid mountains of moving ink. As a matter of fact, and fortunately, there was a gap in the mole over which Yvonne was hurled by a phenomenally large sea; but at this point the mole bristles with jagged iron-headed piles that would tear the bottom out of a liner. Professor Scott and his crew are therefore to be congratulated on a providential escape.” 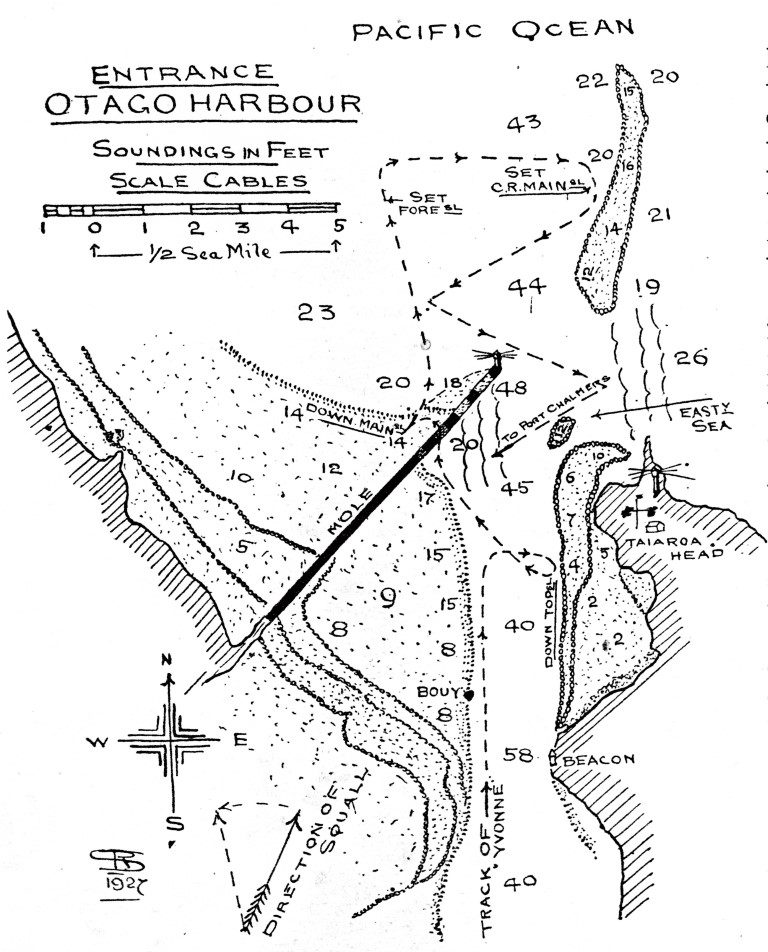 Once in the lee of the mole in comparatively smooth water, Scott and his crew clawed the mainsail down and lowered the foresail which had broken its stops and was lashing about, and drove out to sea under bare poles.
Scott sent a hand below who reported, to his astonishment, that the hull was practically dry and making no water. So they let her drive before the wind to get sea room outside while they got the headsail reset. They then hauled up the harbour under this sail alone while they close-reefed the mainsail.
Through darkness and blinding hail squalls Yvonne beat up the channel. Scott thought she had never sailed faster. On the way they overtook several launches running for shelter. They spotted some of the entrants sheltering under the various headlands and finally, Lady Roberts, the Defence steamer, going down to their assistance.
At 9.30pm Yvonne picked up her moorings at Carey’s Bay, the whole wild escapade having occupied only a little over two hours. Remarkably, a few strokes of the pump cleared all the water which had found its way below during the first violent squall, the sideways career over the mole and the heavy beat up the harbour. After stowing ship and “absorbing a liberal amount of cherry brandy”, Scott and his crew caught the last train to Dunedin.
By the next morning, Christmas Day, the weather had settled down to a steady 50mph blow. At 6am Scott telephoned the Harbour Master’s Office to learn that all of the yachts were safe with the exception of Pera.
Lady Roberts picked her up off Danger Reef 30 miles downwind the next day and towed her in to Moeraki. Scott then arranged to have Yvonne slipped at Port Chalmers. The shipwrights found that the triple diagonal kauri hull was scarred on the starboard side but not a seam had started nor a plank split. There was however a large cavity in the forward end of the lead keel, probably from striking one of the mole’s fearsome piles, and much of her copper sheathing was torn and displaced. 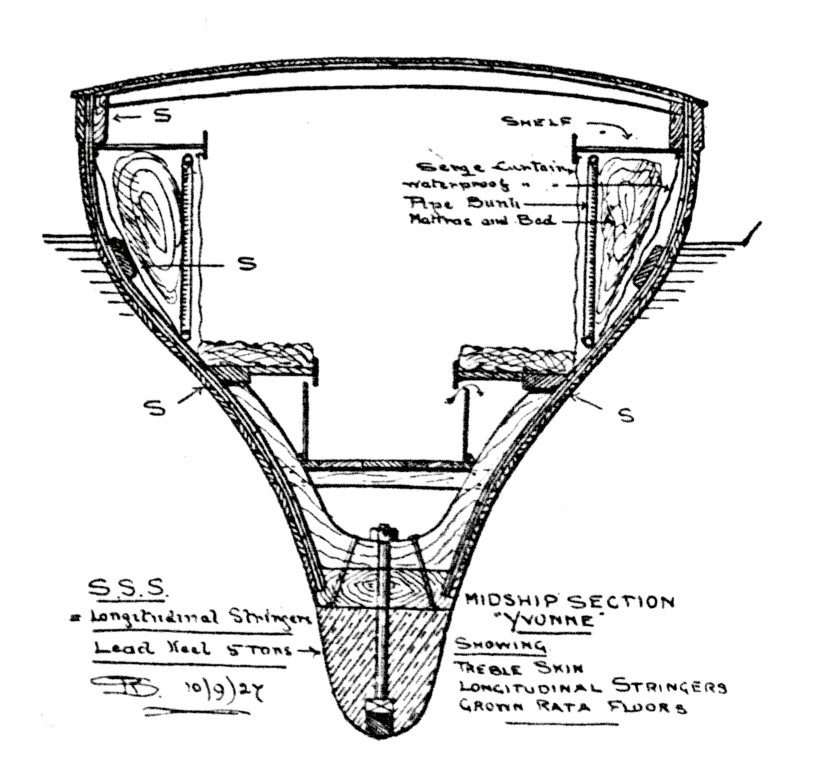 So well did the shipwrights work that, within a couple of hours, Yvonne was in trim and ready to race if the club should decide to restart the race. She now showed little evidence of the battering she had received in steeple-chasing the mole.
To Scott, a skilled engineer and yacht designer, this was eloquent testimony to the combination of the strength and natural elasticity of Robert Logan’s diagonal system of construction and the quality and great resilience of heart kauri timber.
The Otago Yacht Club ran the race again on 15th January 1910 starting at 3.30pm in light weather. Scott could not wait and had sailed Yvonne back to Lyttelton. Iorangi romped in first, Carina second and Roma third.