The humble pressure-cooker is a much-maligned, misunderstood utensil, writes Matt Vance, but it can transform your cooking duties – especially in a boisterous sea.

The stories always involve a pressure-cooker owned by a grandmother or a widowed aunt. They all end with some version of the pale stew being shot out of the top and sprayed all over the kitchen ceiling. Occasionally this will stretch to an almighty explosion that will cover the kitchen and cat in over-cooked vegetables.

It’s one of those urban myths that might have happened once but gets amplified and told with wide-eyed enthusiasm as if it just happened yesterday. These stories seem to multiply in grandeur and number as they spread until, before you know it, pressure cookers get a bad name and get discarded like fitness crazes and fad diets. It is a sorry tale for such a wonderful cooking tool, a tool made for those who venture to sea in boats. 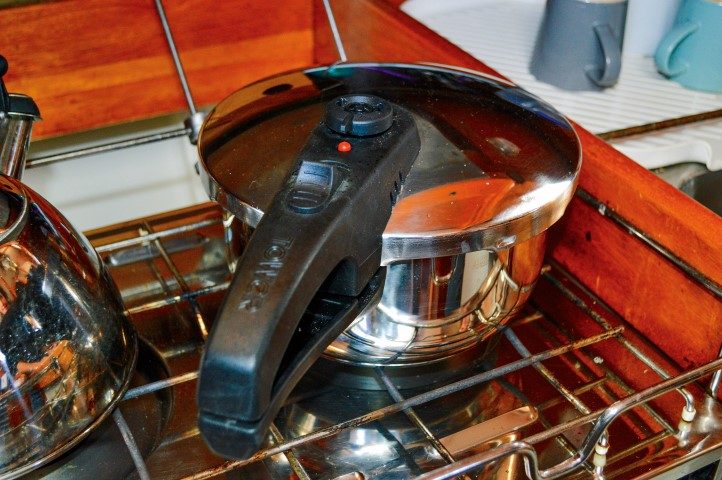 For the pressure-cooker it all started, not with someone’s grandmother, but with a French physicist Denis Papin, who in 1679 invented a steam digester in an attempt to reduce the cooking time of food.

His airtight cooker used steam pressure to raise the water’s boiling point, thus cooking food more quickly. It looked like a bomb, which might have explained the bad publicity issues that developed later on.

The first pressure-cooker was manufactured in 1864 in Germany and the first patent for one was issued in Spain in 1918. With the patent granted, the first ‘express cooking pot’ was sold accompanied by a recipe book containing 365 recipes – what has become the standard attachment to every pressure-cooker since.

How a pressure-cooker works is simple physics. A normal open top pot will boil water at 100°C. The temperature of the food it might contain is limited to somewhere near 100°C; if more energy is put in to heat the pot, it just vaporises to steam.

In a sealed pressure-cooker, as pressure rises, the boiling point of water increases. At a pressure of 1bar or approximately 100kPa (15 psi) above the existing atmospheric pressure, water in a pressure-cooker will reach a temperature of 121 °C.

Inside a pressure-cooker, once the water is boiling and the steam is trapped, the pressure from the steam increases and pushes on the liquid – this increases its boiling temperature. 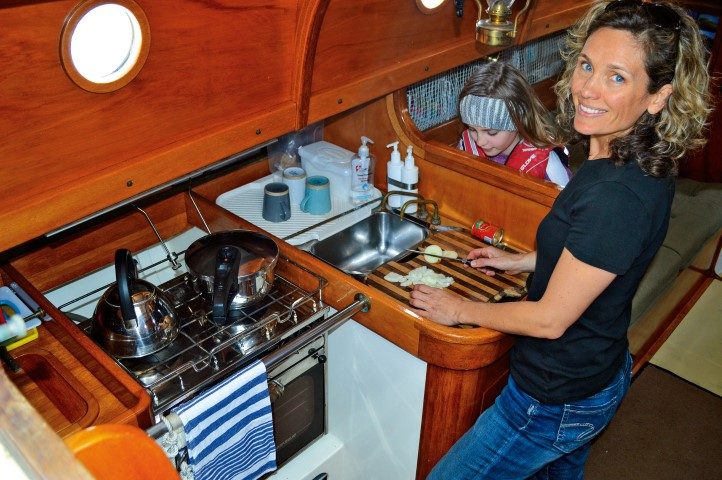 The heat applied to the liquid by the heat source continues to create more steam pressure and thus increases the temperature of the liquid. Once the selected pressure level is reached, the pressure regulator on the lid releases any excess steam, and the heat can be lowered to maintain the pressure and save energy, since the pressure will increase no further.

A pressure-cooker can overcome the effects of elevation and this is why you will find the pressure cooker a well-loved piece of gear by high-altitude climbers and field crews up on the Antarctic plateau.

I got my introduction to pressure-cookers through the combined influence of sailing author Annie Hill and just plain poverty. It was the year after I started my first business and the fiscal tide ebbed away leaving me high and dry.

I had to learn to live on next to nothing while simultaneously not starving. It was a steep learning curve but it was aided by stumbling across Annie Hill’s great book Voyaging on a Small Income.

This is a veritable bible for those who live aboard on the smell of an oily rag. Its chapter ‘The Inner Man’ hinges squarely around the pressure-cooker and living on a diet of beans.

I quickly had the evangelical enthusiasm of the recently-converted. Not only did the pressure-cooker use less fuel, but it also lent itself to one-pot-wonder dishes that go well with rough weather cooking aboard. Black beans that usually take hours of boiling could be done in five minutes.

The pressure-cooker could render any cheap tough meat into the consistency of fillet steak. “You could cook your jandles in there,” said one discerning friend as he enjoyed a one-pot curry aboard.

The beans gradually took over as I realised they were the perfect boat food. They could be stored dry without refrigeration and could be made to do some outstanding culinary feats.

Something about the pressure also blended the flavours and retained the nutrients, giving similar results to a slow cooker, without all the hours of waiting. As life moved on and a family grew it became my favourite way to feed a tribe in a hurry.

On board the pressure-cooker is the engine room of curries, stews, soups and even whole steamed chicken. The pale stew that coated Grandma’s ceiling was mostly due to overcooking which is an easy trap to fall into if you are not used to the quick cooking times of the pressure-cooker. 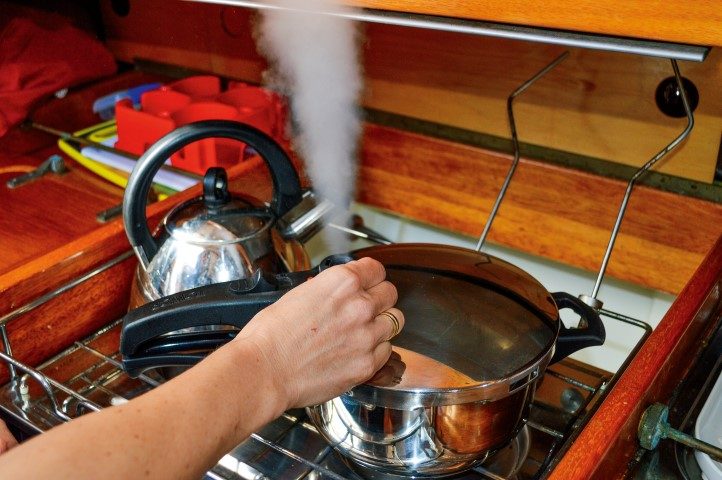 Once you have the knack, it makes cooking for a crowd easy and its no-mess-one-pot simplicity means it was invented for those who go to sea.

The key to it all was forking out for a modern stainless pressure-cooker. Those old aluminium ones with weighted valves that you can find in second-hand stores are where all the stew-on-the-ceiling stories come from and best avoided.

The modern stove-top pressure-cookers are well-engineered and are full of safety features that make them idiot-proof. There are dial-up pressure settings and a handy pop-up button that indicates when the set pressure inside the cooker has been reached.

This feature also self-locks so that the lid cannot be mistakenly removed under pressure. For the ultimate meltdown-in-the-reactor sort of idiocy, there are three-stage safety valves that prevent any risk of over-pressurising the pot.

Despite all the safety features, guests aboard the Whitney Rose will eye the pressure-cooker suspiciously as it quietly hisses in the galley. “Do you need a steam ticket for that?” is a question often asked.

This hiss seems to engender an unwarranted fear for the uninitiated. As a kid, I was terrified of steam traction engines that would rumble their way into the local A&P show.

I remember my Grandfather saying, “Never underestimate the power of superheated steam.” It was his way of marvelling at a wonderful invention but it sounded more like a dire warning to take cover behind the nearest hay bale. Despite all that I have come to love the pressure-cooker and dote on mine like a stoker does the boiler of a steamship.

For some reason, the pressure-cooker has always battled bad press. Maybe it’s the steam traction engines or the stew-allover-the-ceiling story that keeps doing the rounds? Every time the pressure-cooker appears on the galley stove and we have guests aboard I hear some version of these stories followed by suspicious looks cast at our wonder pot.

Amazingly these aspersions are soon displaced by the silence that descends on the table of hungry sailors enjoying a quick delicious meal.

I never thought I’d be the one to offer culinary advice but here it is:

As much-diced chicken, soaked beans, or rough stewing steak as you like A handful of rice

Any vegetables you have diced up A squirt of canola oil

Depending on the sea state, crack a beer or throw-up down the sink first.

1. In the pressure-cooker squirt in the oil and brown the meat. Fire in the vegetables and curry paste. 2. Chuck in everything else and give it a vigorous stir up.

4. Release the pressure and slop in the rest of the coconut cream.

5. You are done… enjoy straight from the pot.

How does it feel?