Deep in the central North Island, Piopio could hardly be called a boating mecca. But boats built in the tiny landlocked Waitomo township are being used for work and fun all over the country – and elsewhere in the world. Story by Lindsay Wright.

Boating people may start to get a little nervous travelling south on SH3. As Te Kuiti fades from the rear-view mirrors, land closes in – low, rolling hills freckled with grazing sheep and the odd derelict farmhouse.

The nearest seawater is about 35km away on the wild and deserted North Island west coast. The road trundles into Piopio (‘thrush’ in te reo) – a café, RD1, RSA, Op Shop, service station and dairy, with a scattering of houses backing into the hills. But dominating the CBD, a sign: Laver Marine.

It’s like coming across a yacht club in the Gobi Desert. 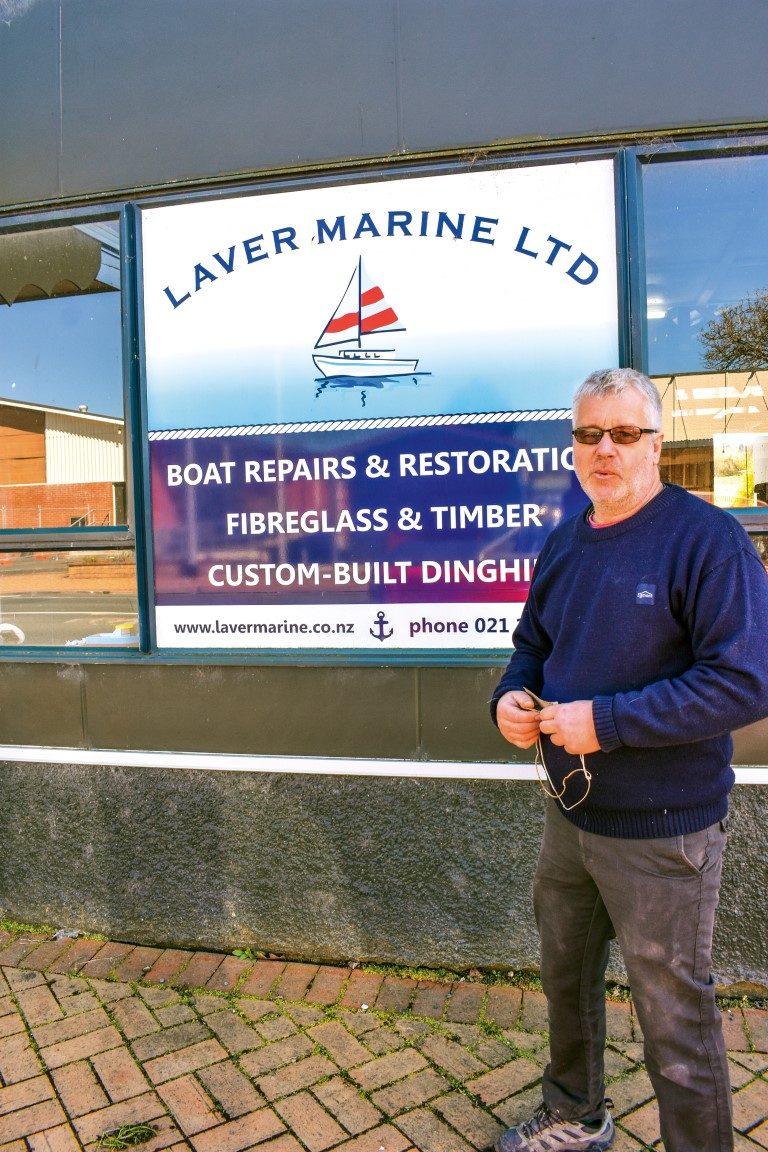 Max Laver, the thickset man who opens the door, has a welcoming smile and, like a magician pulling a rabbit from a top hat, ushers us into what must be one of the most beautifullycrafted collections of small boats anywhere in the country.

A Wellsford dory (5m or so) built for a client sits just inside the door awaiting delivery and a Canadian canoe rests upside down on trestles tempting passers-by to stroke the smooth wooden finish.

“Mum and Dad were Cockneys,” he explains with the soft burr of Canadian accent (his mother later married a Canadian and he was raised in Ireland, Vancouver and Toronto).

He did a wooden boatbuilding course in Canada. “People were saying: ‘What do you want to do that for? Wooden boats are a thing of the past.’ But before the course finished I had six job offers.”

He tackled another boatbuilding course in the UK and moved on to work in boatyards all over the world. “I built fine furniture for superyachts, fitted out ferries and built dinghies in Ireland and worked on quality cruising boats in the USA – I just followed the work around the world.” 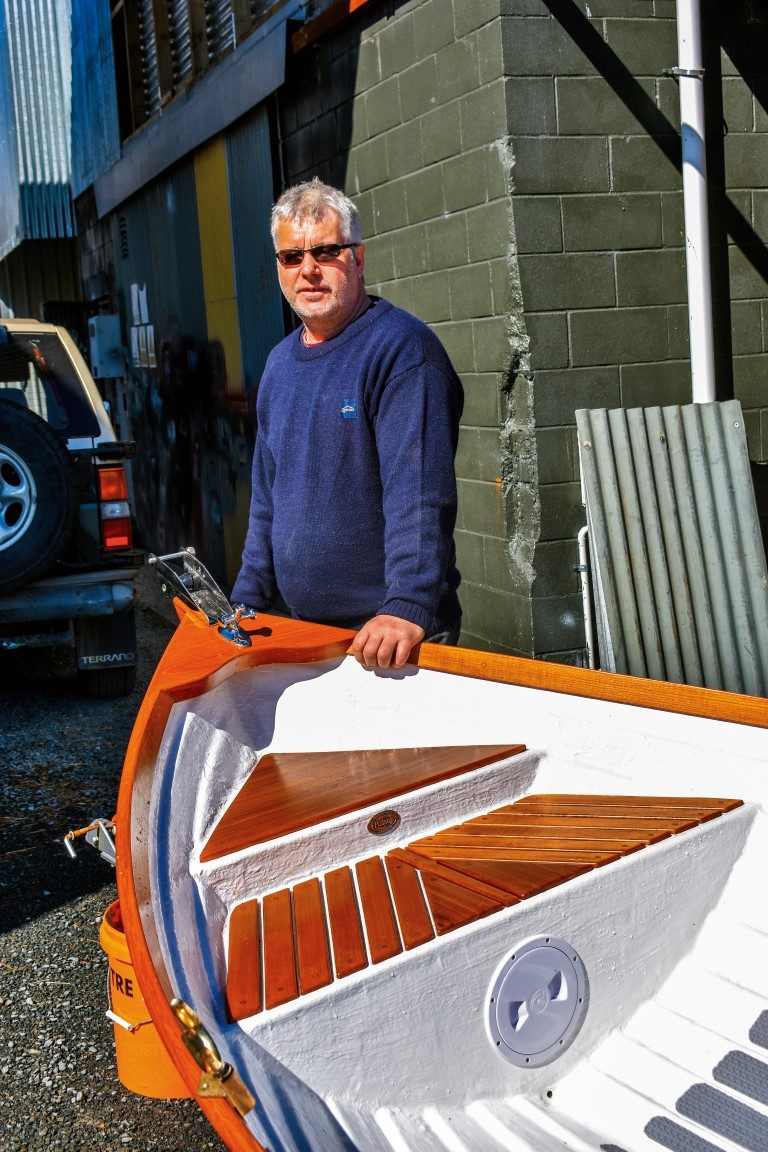 The well-travelled young craftsman ended up in New Zealand, working on superyacht fit-outs in Auckland. “That’s where I met my wife Rachel – I thought she was a bit of all right and asked her out to dinner. She replied: ‘Well, you’re no oil painting – but you’ll do.’ I knew that I’d found the right partner.”

About six years ago with daughters Eleanor (3) and Louisa (1) the couple moved to Piopio to be near Rachel’s parents. He had plans to begin building fibreglass dinghies, but Piopio had different ideas.

“We had the first school bus in the country – here in Piopio,” says Laver. “There were three schools in the area but they were amalgamated in 1924 and a Ford Model T bus was acquired to run the kids to school.”

A local school principal sourced the Model T Ford chassis from Whenuapai, but they needed someone with woodworking skills to complete the rebuild. “They wanted a working bus – not just a replica – and that’s what we did.” 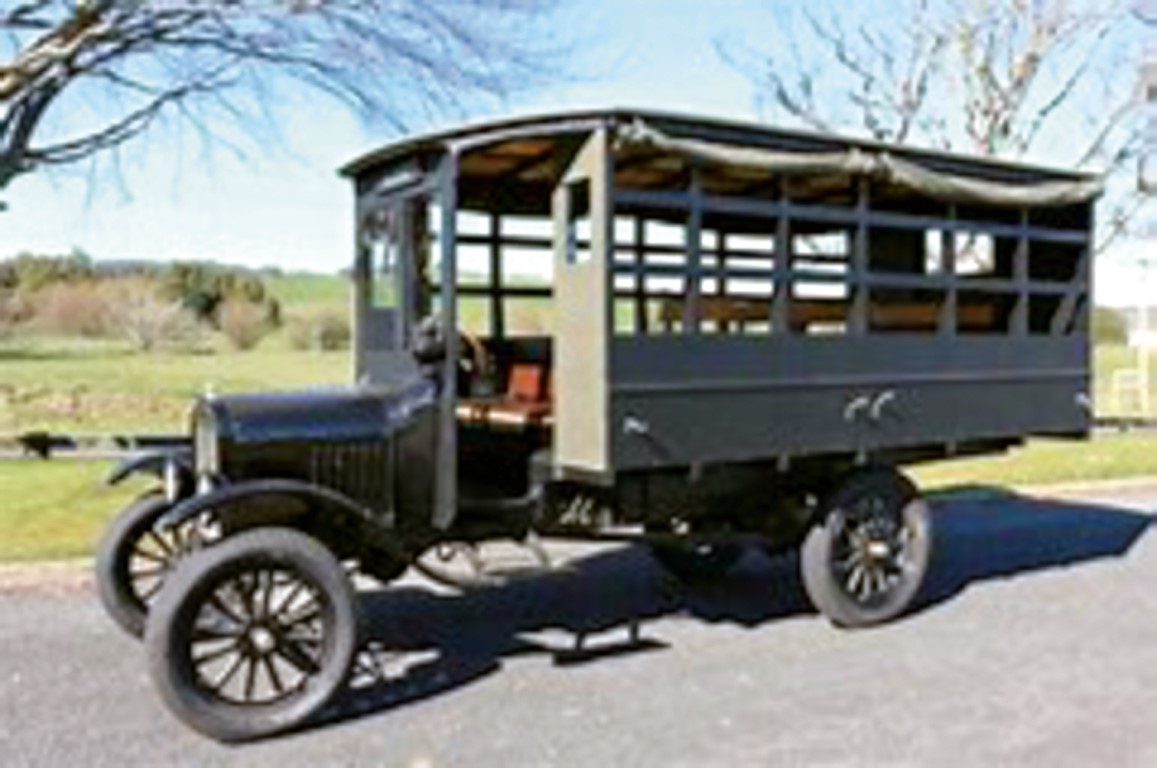 Laver and fellow yachtie Mark Carter used photos of the original 1921 school bus to work out the layout for the new bus and worked for over a year to bring it to roadworthy condition.

“We used about 4m2 of milled macrocarpa for the job and then took it to Wellington for an official presentation. She’s got a bit of an overhang at the stern and when we took a load of politicians for a ride around the block – some of them were pretty big people and they all made a dive for the back seats – we were worried about the bus doing wheel stands. But it worked out OK.”

The veteran school kid carrier now has its own garage in downtown Piopio and is rolled out for parades and special occasions.

Meanwhile Laver had acquired a huge workshop area over the road and began building dinghies. “I built a few and people asked where I got them and if they could buy one. I could see there was a market for well-made fibreglass dinghies.”

The workshop draws a crew of locals who just like pottering around with boats or passing motorists intrigued by the maritime signage. 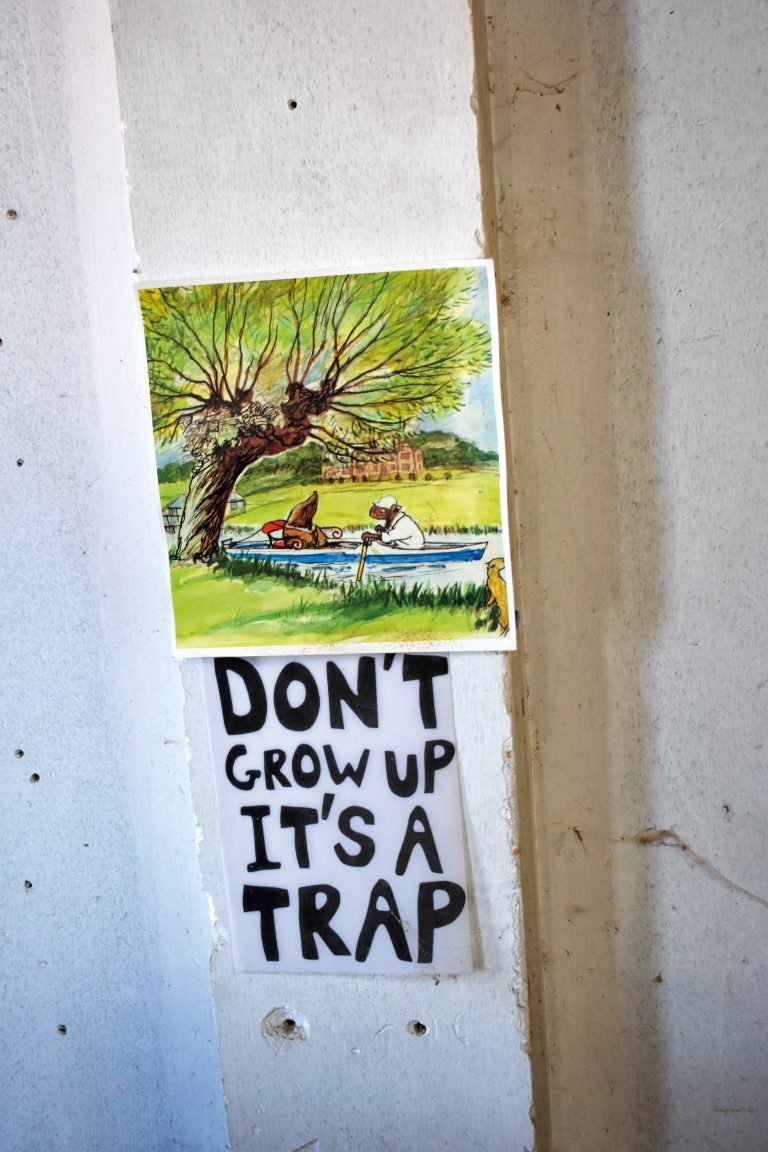 “Rachel bought this at a jumble sale.” He hefts a toy wooden dump truck down from a shelf. “She asked if I could fix it. But there’s an 87-year old former merchant seaman living just down the road, who used to drop by for some company. I asked him if he’d like to fix it. He enjoyed it so much that he began building them.

“We raffled or auctioned them and sent the proceeds to the Starship Childrens’ Hospital – or other charities. The seaman loves being busy – having something to do. Sadly he’s too shaky to use the power tools now – but he still drops in for a yarn.

“Piopio is great – where else could I afford workshop area like this?” he sweeps an arm around the huge area. “It’s central for shipping materials in and our products out – and a great place to raise kids.” 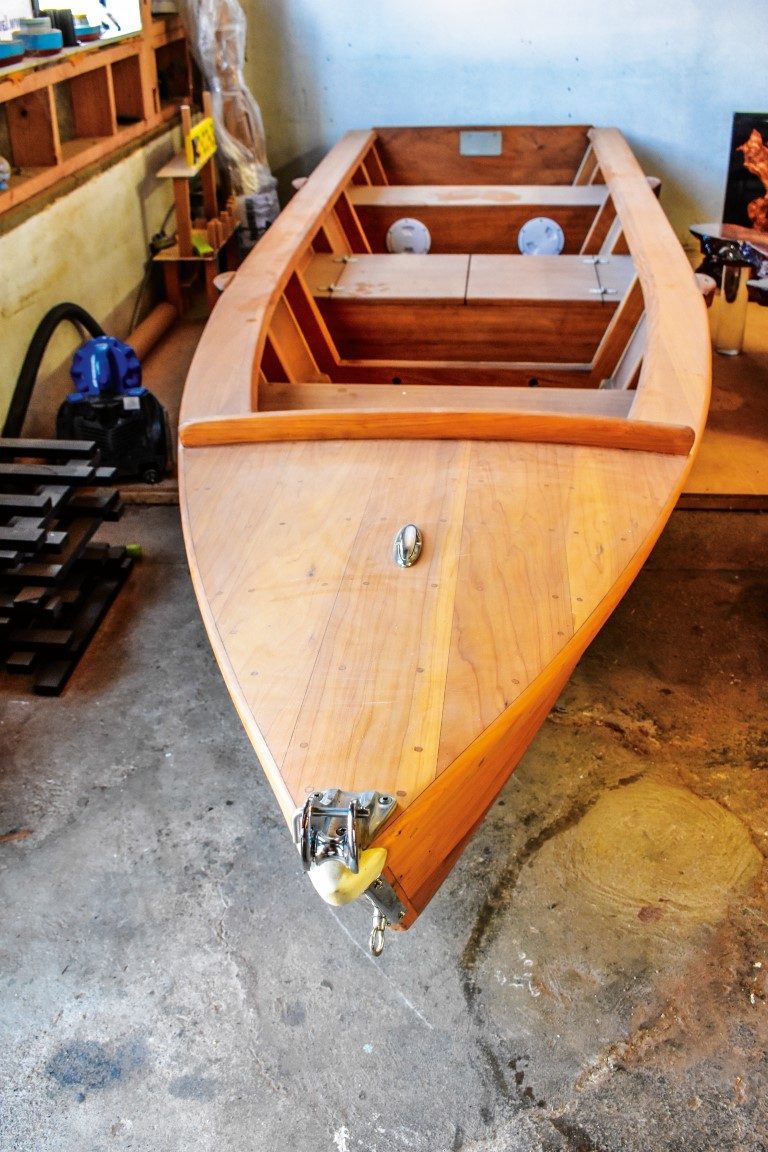 The workshop has become the closest thing the township has to a maritime museum. Bits of interesting bric-a-brac or books rest in most spare spaces. “I want it to be a homely space – a place that’s nice to be in.”

Meanwhile a line of five designs, the Teddington, Romney, Putney, Shepperton and Lugger dinghies (from 2.2m to 4.0m LOA) roll from the workshop and are snapped up by discerning buyers. “I’ve even built boat chandeliers and some of our rowing boats have gone to be tenders on superyachts.”

People familiar with the UK’s river Thames will know most of the names – Laver’s named them after the locks in the upper Thames. “Just a bit of a nod to my origins.”

The boats are built using WEST System epoxy on male moulds with carbon fibre applied to stress areas like centreboards and rudders in the Teddington and Lugger sailing dinghies. All the designs have ample watertight buoyancy and stowage compartments.

“We work at keeping them all New Zealand-built – bronze castings from Tauranga – and other componentry from around the country.” The gunwales and interior joinery are available in teak, macrocarpa, mahogany or iroko, all richly varnished.

The Putney and the Teddington are built on moulds taken from traditional English wooden craft and modified over the years. “When we acquired the moulds,” he says, “we changed them yet again and redesigned the interior fit-out.”

The Romney is a New Zealand design, originally built as a ‘Nova Craft’. He built a boat from the original mould, re-faired the hull and took a new mould from that, then redesigned the interior to have more buoyancy and added teak trim.

The Shepperton mould was acquired in 2016, a big-volume trihedral hull to complement the Laver range.

The Lugger was designed by Dunedin boatbuilder, Jack Niewstub in the 1970s. Jack Shacklock, of Shacklock Stoves, liked what he saw and commissioned Niewstub to build him another boat like it. A mould was made from the original carvel planked boat and made its way to Piopio via Trade Me and many modifications.

“I just need to build boats,” says Laver. “I was always taught to do it right and do it once – it’s tremendously satisfying.”

Another sideline of the Piopio production powerhouse is a range of Little Kiwi play tables – an elevated sandpit on legs and a Lego table, plus a miniature workshop bench, complete with shadow board and rudimentary tools.

Huge gleaming slabs of swamp kauri shimmer throughout the workshop. “This boat’s being exported to London in the next week or so.” Laver strokes the finish and points out the carbon-dating certificate from Waikato University – 3,200 years old, it says. 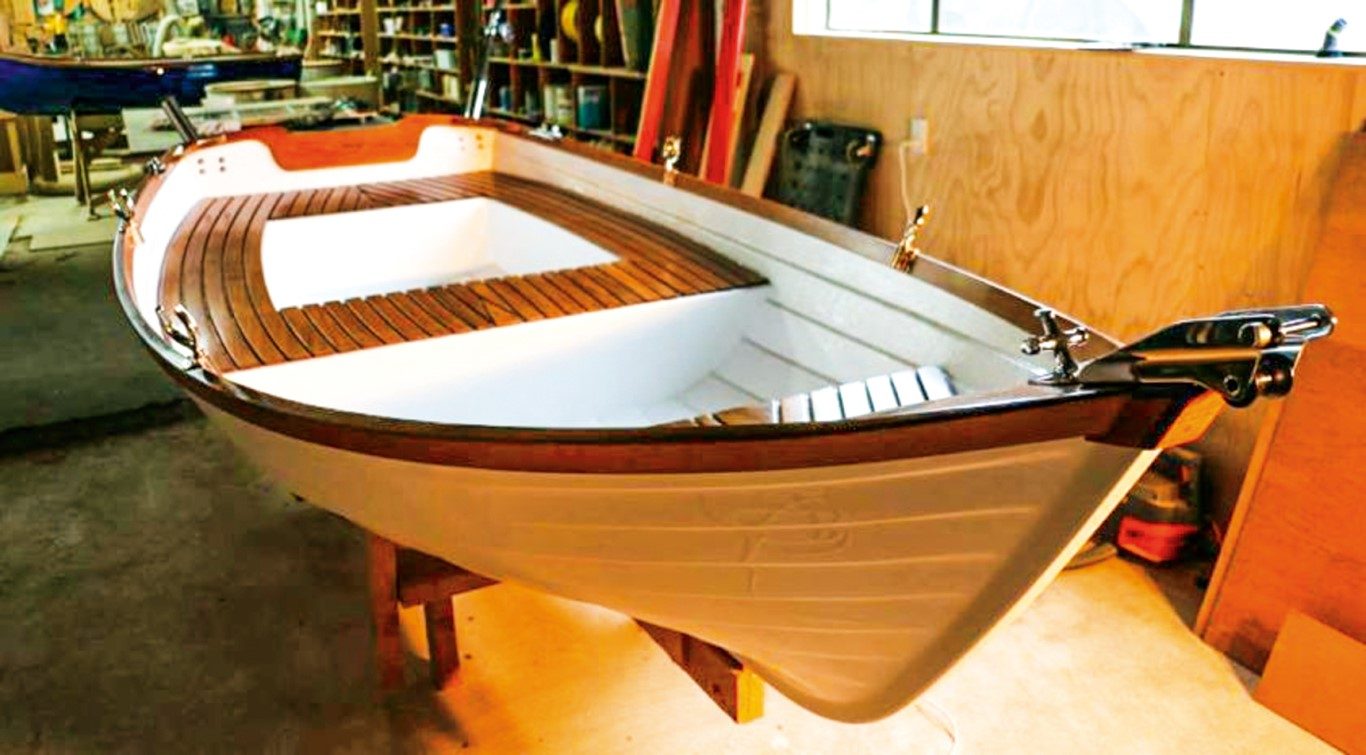 “Oh – and there’s the resin infusion set up,” he adds, and strides out the back door. “We’ve built the first carbon fibre dump truck tray in the country,” he says proudly. The carbon fibre rubble carrier was retrofitted to a local trucking company’s chassis and the weight saving increased the payload by 2,000kg.

“The carbon fibre is lighter and stronger than steel. It’s been carting gravel and rubble down rough farm tracks for a while now without any problems – it’s quite a big saving in fuel and costs. They’re rapt. We’ve also been building carbon fibre helicopter hoppers and bins for a while now too – they’re just normal around here now.”

The carbon fibre lay ups are done in a climate-controlled building out the back using a huge rectangular mould festooned with plastic infusion hoses. “Once we’ve got the trucking industry thinking about carbon fibre truck componentry, I’d like to have a look at building carbon fibre shipping containers. But I’ll always tinker around with the boats – that’s where my first love lies.”

All in the heart of Piopio.