Peter Jacobs’ been selling and servicing Volvo Penta marine engines for over 40 years and his ability to correctly match engines to boats when repowering is legendary. Here’s the story of a man who’s one of this country’s best at what he does. Story by John Macfarlane.

Engineering has long been in the Jacobs family blood; his grandfather Fredrick and his father Bill both worked as engineers for the Auckland Hospital Board.
Interestingly, Fredrick designed (and Bill built) the first iron lung in New Zealand. Jacobs’ older brother Ronnie also became an engineer, serving his four-year apprenticeship at sea as an engineering cadet on the New Zealand Shipping Company ship, the Otaio.
Jacobs did his engineering apprenticeship on land with Mason Bros, a marine engineering company then based in Packenham St, Westhaven. Completing it in 1969, he followed his brother to sea and joined another NZ Shipping Company ship, the Hurunui, as a junior engineer. 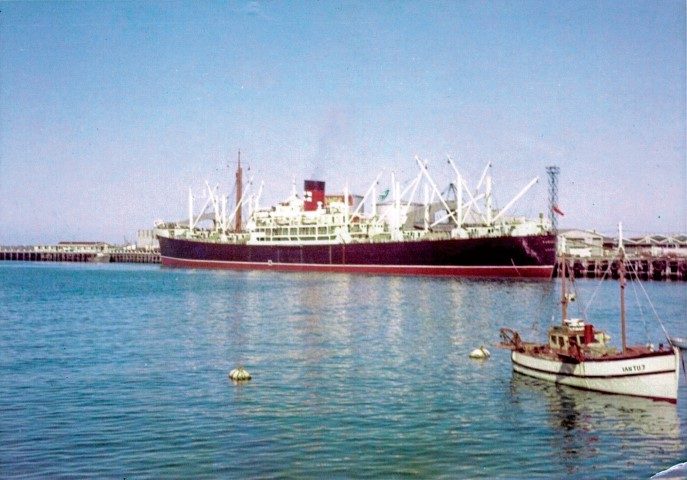 While the Hurunui was powered by a Doxford diesel engine of some 12,000hp, on his first voyage Jacobs’ role was to oversee the refrigeration units, critical for shipping frozen lamb carcases and apples to the UK, especially through the tropics. Jacobs served three years aboard the Hurunui voyaging between New Zealand and England.
In 1972 he left ships and, after marrying his wife Raewyn (nee Wilson), the couple worked in Australia for a year. During that year they saved enough money to pay for half a house in Titirangi – how times have changed.
Back in Auckland, Jacobs worked for Allelly Bros, ship repairers, followed by a stint with Irvine Engineering. Then in one of those seemingly small things that in hindsight change one’s life, Jacobs saw a small advertisement in the Auckland Herald for a Volvo diesel mechanic at Scandinavian Motors.
This was in 1976 – and Jacobs has been with Volvo Penta ever since.
The service manager was Derek Clough, who in May 1978 decided to start his own business and asked Jacobs to join him. The pair founded Ovlov Services Ltd and set up in Barrys Point Rd on the North Shore. Jacobs funded his share of the $10,000 start-up costs by taking out a $5,000 “home improvement” loan.
Initially Ovlov Services just did servicing and repairs, with Clough looking after cars and Jacobs the marine engines. One of his first jobs was servicing the twin Volvos in Doug Meyers’ Mason Clipper. “The best customer we could have had when starting up a business.” 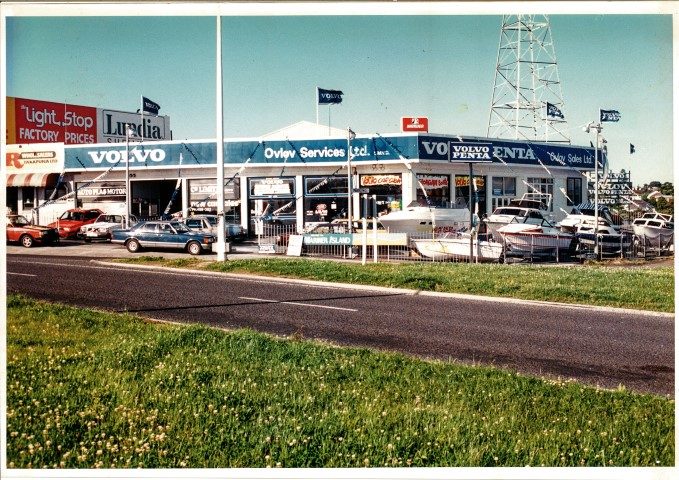 Clough and Jacobs had a lucky break three months later when Moller Marine closed its workshop and appointed Ovlov as a Volvo Penta dealer, which gave them the opportunity to expand into new Volvo engine sales and become an agent for Mariner outboards.
Being the only Volvo Penta dealer in Auckland, Ovlov went from strength to strength. The popularity of the Volvo Penta Duoprop engines in 1983 gave the company a healthy boost in sales.
By mid-1987 the business was going so well Ovlov took over the lease of the car dealer at the front of its existing premises, which had just had a $100,000 renovation.
Two months later in October 1987, the sharemaket crash torpedoed all sales of marine engines. Trapped into a six-year lease, Clough and Jacobs obtained a car dealer’s licence and began selling new Volvo and Diahatsu cars, as well as secondhand cars. It was car sales that paid the rent for the remainder of their lease.
The moment the lease was up in 1993, Clough and Jacobs split the business into two, Clough taking over the car sales while Jacobs took over the marine side.
Jacobs took the opportunity to shift Ovlov Marine back across the bridge to the Westhaven area, where it’s been ever since. Ovlov moved to Gaunt St in 1995, then in 2004, to its current location in the Orams Marine Village in Beaumont St, only 200m from where Allelly Bros once operated. Ovlov opened another branch in Pine Harbour Marina in 2010. 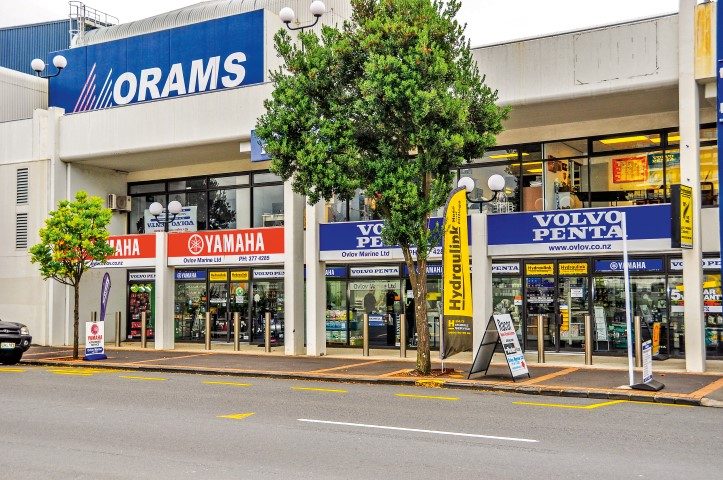 Another big change Jacobs made was bringing in Lachlan Trembath as an equal partner in 2004. “That’s the most important move I’ve ever made in business. He’s [Trembath] been a tremendous partner and a great asset for the company. We’ve also lucky to have so many talented and loyal staff.”
Besides servicing, a big part of the Ovlov’s business is repowering older boats. Jacobs isn’t always a fan of rebuilding an engine, as it can be more expensive than buying new. But he’s the first to admit repowering is an expensive exercise that will over-capitalise many older boats.
Due to all the variables, repowering is far more complex than most boaties appreciate and correct professional advice is critical. While computers can do this mathematically, with all the variables involved there’s no substitute for experience. Few can match Jacobs’ 40+ years of knowledge and the database of every repower he’s been involved with.
The late Len Gilbert often said, the golden rule of repowering is to start at the propeller and work forward, a mantra Jacobs also applies to every repower.
It all starts with establishing the best propeller diameter and pitch for a particular hull, which is factored against the desired level of performance. The chosen propeller will in turn help determine the gearbox ratio and engine horsepower. 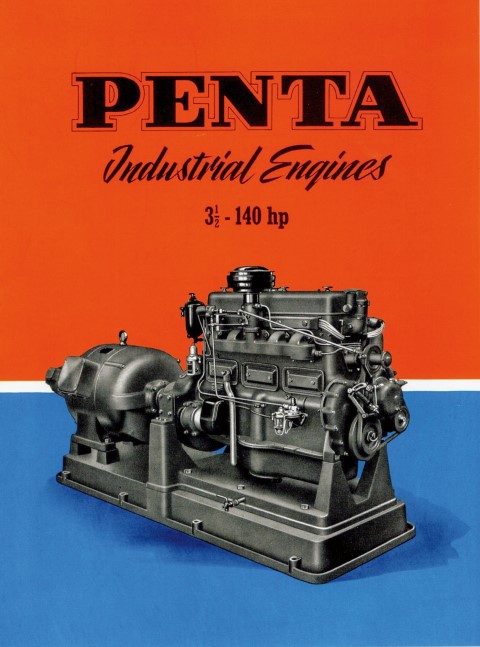 Sadly, when repowering many boaties start with the engine and make their decisions backwards; Jacobs has seen numerous unhappy outcomes using this approach.
For example, some planing launch owners seeking to save a few dollars install a smaller engine than what’s required. This can result in not having enough power to get the launch comfortably and easily up onto the plane.
Conversely, owners when repowering yachts can fit too much horsepower, which leads to all manner of negative issues including propeller cavitation and a shortened engine life.
“There’s nothing wrong with plenty of horsepower but you have to make sure you can use it,” says Jacobs. “The biggest problem we have is getting the [gearbox] ratios right. These days engines rev higher so we often need to replace the gearbox with a lower ratio to get the shaft revs right. Most troubles are traced to owners not getting the proper advice or not following it when they do.”
Regarding unhappy outcomes, it’s human nature that some customers seek to lay blame on everyone else, even when they’re at fault. Jacobs has no problem fronting up when it’s clear he needs to. But when the issue has been the result of the customer not carrying out proper maintenance – or ignoring professional advice and who then expects to be fully compensated, he stands firm.
“It’s the nature of business, when you stand up for yourself you don’t make friends,” he says. “If we’re wrong, we’ll fix it, but if we believe we aren’t then we’ll stand up for ourselves.” 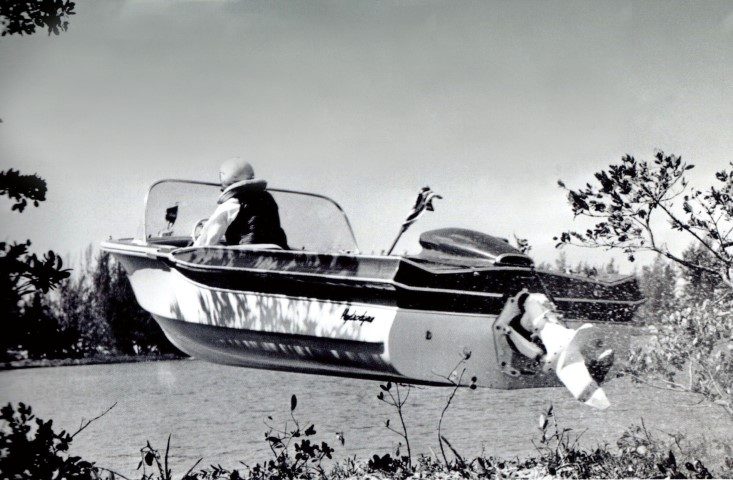 Let’s leave engines and move to a personally painful chapter in Jacobs’ life. Pain is a natural part of being human, as REM puts it, “Everybody hurts sometimes.” Jacobs has faced pain regularly since the age of 13 when his mother died of Motor Neurone Disease (MND).
“She was sick for four or five years before that, so I had to watch it (MND) drain the life out of her. That was hard.”
As Jacobs came to learn the hard way, MND is an inherited disease that can be traced back on his mother’s side of the family to 1840. Besides his mother, MND would claim the lives of sisters Pamala and Susie, brother Ronnie, aunts Jean and Ada, plus another six relatives. For over 50 years Jacobs lived with the knowledge he too could suffer the same fate at any stage.
Such a high incidence of MND within one family gave the Australian researchers at Sydney University the opportunity to study MND in depth, which they’ve been doing since 1980s. This and other research eventually in 2011 led to the identification of the specific gene that caused MND in the Jacobs family. This in turn allowed Jacobs to be tested to see if he carried the specific gene.
“I went in to get the test results and the genealogist couldn’t wait to tell me: ‘We have good news today.’” Listening to Jacobs tell of the story of how MHD has affected his family was a humbling experience and a powerful reminder why we need to treasure life and make the most of every day. Having lived with the threat of MND for over 50 years, Jacobs has learned that lesson well.
MND hasn’t defined his life, nor held him back as it could so easily have done. Rather, it’s given him an appreciation of life that he transmits to those around him. Listening to the happy banter from his staff as he and Trembath posed for photos inside their Westhaven showroom proved that. 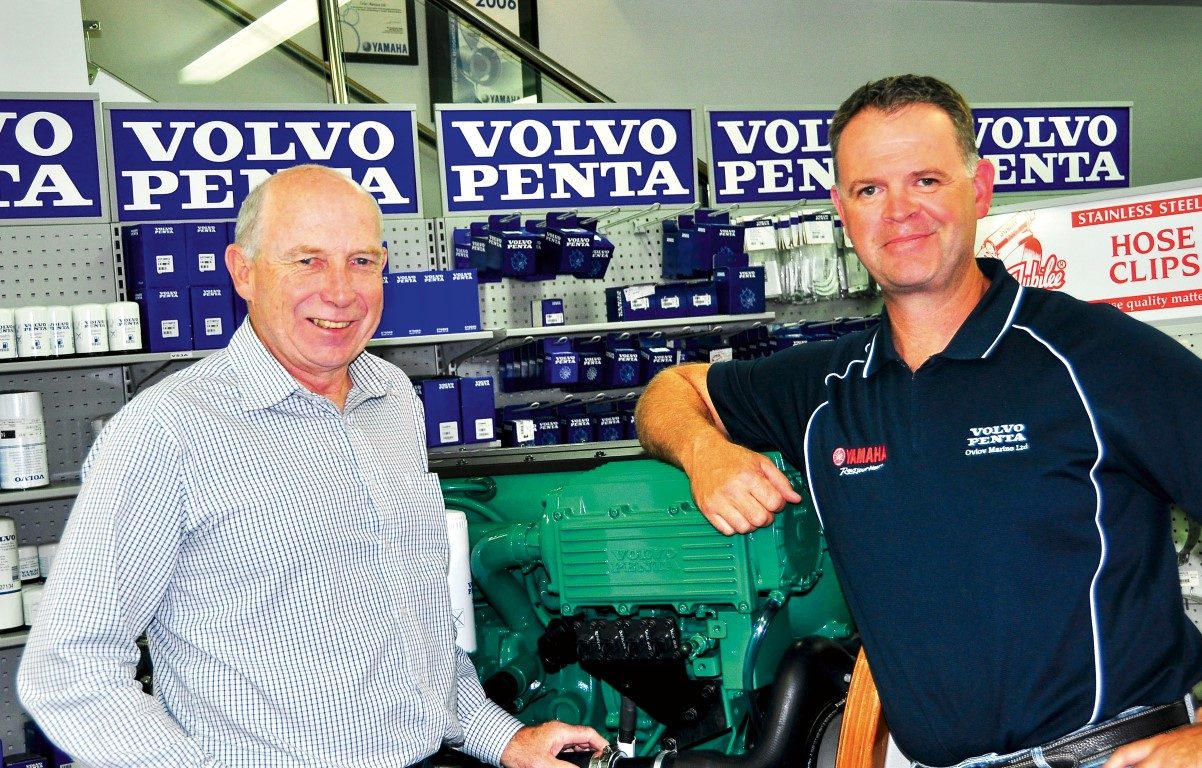 At an age where many have retired, Jacobs shows little signs of slowing down because he still loves what he does.
But spending more time with his family is important and, with Trembath solidly in place as a director, retirement is now more than a possibility.
I came away from my interview with Jacobs not only in awe of the depth of his engineering knowledge but with a whole new appreciation of how precious life is.
Thanks Peter for a wonderful afternoon. BNZ

Back in the arena