By definition, classic restorations tend to bring additional layers of complexity to a rebuild. Luckily for the boats, though, the purists who tackle these jobs think complexity is part of the appeal. Words and photos by Lawrence Schaffler.

Even though she’s in many pieces and looks a little jaded, Barbarella’s bloodline is obvious. The tumble-home mahogany hull, the flared bow, the classic dashboard and helm, the twin V8s. She’s a thoroughbred Superaquarama Riva – and her beauty will again be resplendent when Marco Scuderi’s finished with her. 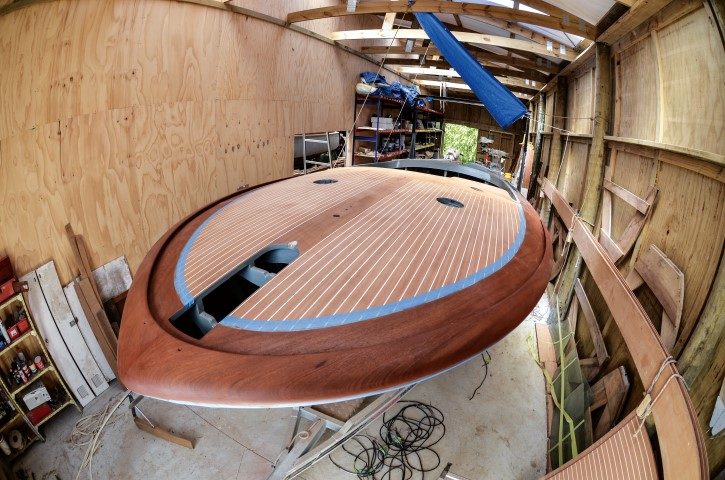 The owner of MCN Shipwrights Ltd (based north of Auckland), Scuderi is an Italian-born craftsman who works almost exclusively with vintage timber vessels. “My heart has never moved forward – it’s still stuck in the roaring twenties,” he offers by way of explanation. For our younger readers, he means the 1920s – and they were certainly roaring times.
Barbarella is one of four projects he is tackling simultaneously. The others are the Eileen Patricia, a 1933 10m launch believed to be Bill Couldrey’s debut build; Victory – a 1906 12m Logan cutter; and Wainamu, a 9m Herreshoff canoe yawl. 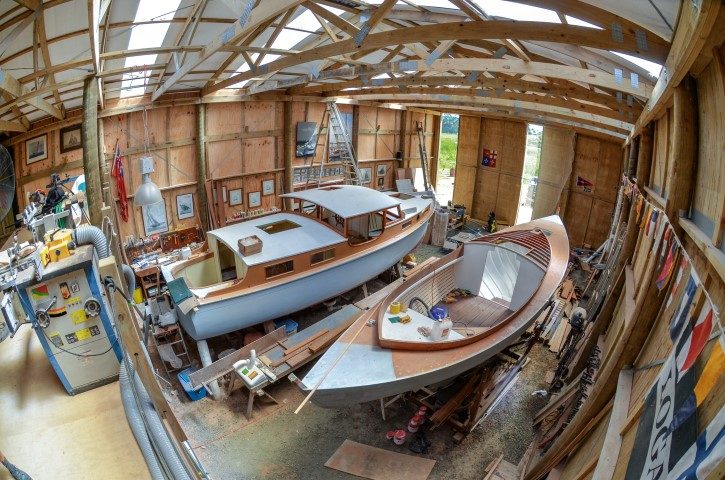 Like many queens, Barbarella’s lived a turbulent life and was in dire need of a restoration. She was built in 1969 – just before the Riva manufacturing facility closed for good – and delivered to a Mr Tachini in Monaco. He later sold her to an (unknown) American who kept her on Nevada’s Lake Tahoe for many years.
She shifted back to Europe when a Norwegian gent, Atle Staff, bought her for his summer house deep into one of the country’s famous fjords. She changed hands again in 2005, when she was bought by the current (English) owner who kept her in Hong Kong. But Barbarella’s globe-trotting years eventually caught up with her, and she was delivered to Scuderi’s boatyard a few years ago.
Working on a Riva is always special, says Scuderi. “They are such iconic boats, with remarkable detail and very precise construction methods. They carry enormous heritage – a unique blend of sex appeal, gorgeous lines and performance – working on one is always a privilege.” 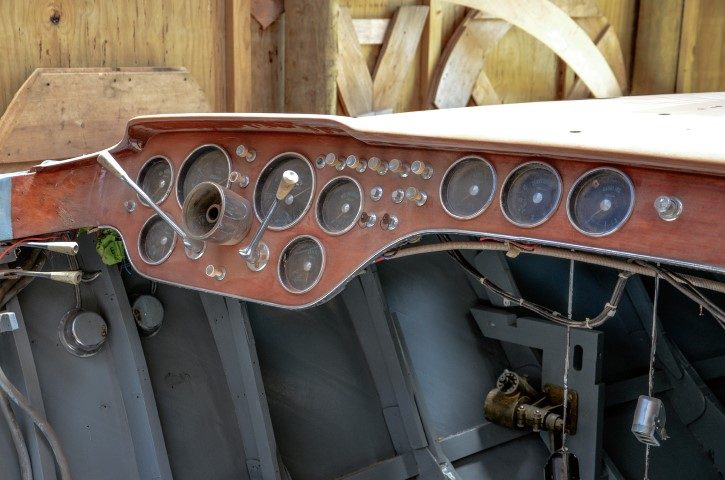 But Barbarella’s return to glory hasn’t been easy. “We’ve spent 18 months replacing the keel, frames and parts of the hull – the rot was everywhere – futtocks, brackets, partners – everything had to be replaced. We’ve used sapele mahogany for most of the internal construction.
“The real problem, though, was sourcing the timber for the exterior. Rivas are renowned for their brightwork and, traditionally, Honduras mahogany was the preferred choice. Of course, it’s now protected and completely off limits. Instead, I’ve used a timber called cedrello. It’s a South American mahogany, and there’s a bit of confusion about its name.
“Cedrello is Spanish for ‘little cedar’ – it was incorrectly identified as a cedar by the early Spanish explorers. The name stuck, even though it’s wrong. Still, at €800 a plank, it’s hellishly expensive – so there’s a premium on accurate measurement and cutting!” 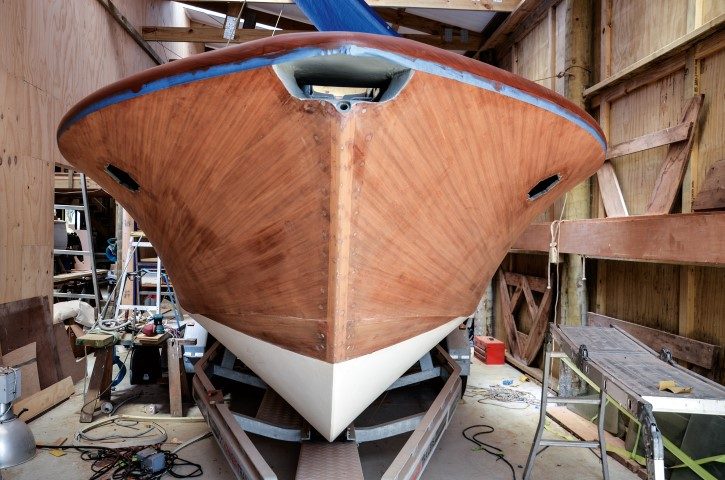 Restoring the deep gleam to Riva’s brightwork demands a specialised solution – Stoppani varnish – and Scuderi has had to import it from the German manufacturer.
“But the original Stoppani was developed by Carlo Riva himself – the designer/builder of the boats. The story goes that while he liked the American-built Chris-Craft boats, he thought they were doing it wrong and he could do better. That even extended to setting up a dedicated facility to make the legendary Riva varnish. That’s where Stoppani began.”
The boat’s engines – US-manufactured Crusader 454 V8s – have also been completely rebuilt. Both had been reconditioned in Hong Kong, but badly. “Both overheated and failed within hours after being restarted. We found machining swarf inside the blocks.”
Auckland’s GER Engine Specialists has rebuilt the Crusaders and Dyno-tested them to make sure each develops its rated 350hp.
EILEEN PATRICIA
A few metres from the Riva is the 10m carvel-constructed launch Eileen Patricia – built in 1933 – and undergoing an even more extensive restoration. Scuderi says there is strong evidence (though not conclusive) that she’s the first boat built by one of New Zealand’s most famous boatbuilders, Bill Couldrey. And he thinks the chap in the photo alongside is Couldrey. 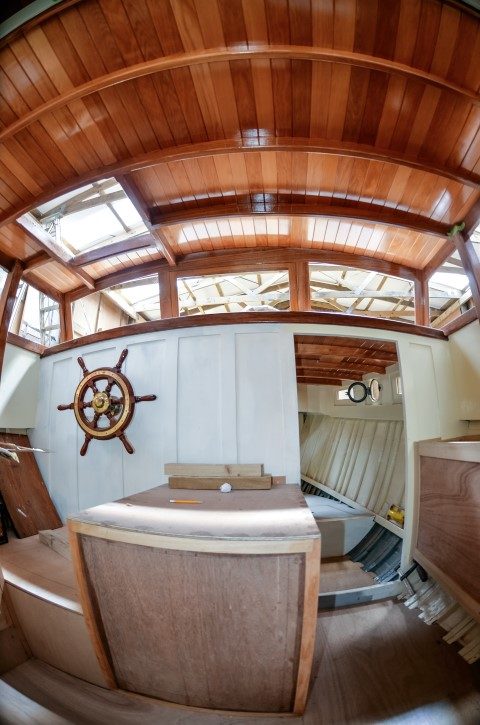 Eileen Patricia’s owner wants her restored to how she was in 1933 – a tallish order given the complete lack of plans. “All we have to work from,” says Scuderi, “is this one photo.”
Like the Riva, this vessel cycled through many  owners over the decades – and each modified the old lady in various ways. In many cases they weren’t flattering additions or makeovers – and rot has compounded the problem.
Scuderi’s been working on her for two years. While the rebuild has seen the removal of all the ‘improvements’, bigger problems include the replacement of many rotten structural components. “It ranges from new sheer planks, decks and bulwarks to coamings and a completely new cabin top. We also had to strengthen the floors and repair some fire damage.
“We are using teak for many of the fittings and brightwork – and I’m confident the end result will be almost identical to the photo.”
With not even a photo to work from, Scuderi has based Eileen Patricia’s interior on other Couldrey designs from the period, with a few modern twists. She will have an enclosed head, and two fridges. Her ancient Ford is being replaced with a new 54hp Yanmar engine.
WAINAMU
Alongside Eileen Patricia is Wainamu, a 9m Herreshoff ‘Rozinante’ light-displacement canoe yawl – one of the American designer’s most popular models. It’s perhaps best to classify this project as a ‘recovery’ rather than a restoration – because she’s a relatively new vessel and her hull’s never been near the water. 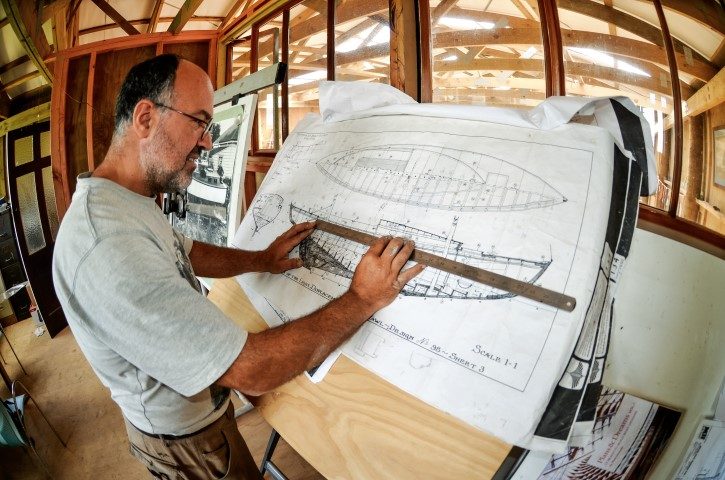 The yacht started life a few years ago as a kitset – created by Maine boatbuilder Doug Hylan. His Herreshoff kitsets feature oak frames with a laminated stem/stern, and the New Zealand buyer of the kit, based in Napier, contracted Scuderi to finish the build.
She has been planked in kauri but uses karri – an Australian timber similar to the iron-like jarrah – for the coamings and cabin beams. Scuderi has mounted the keel and will soon begin building the yawl’s spruce spars.
VICTORY
This 1906 Logan cutter will require significant surgery before actual restoration begins – primarily because the hull is twisted. Straightening it, says Scuderi, may see the keel removed and much of the hull deconstructed. 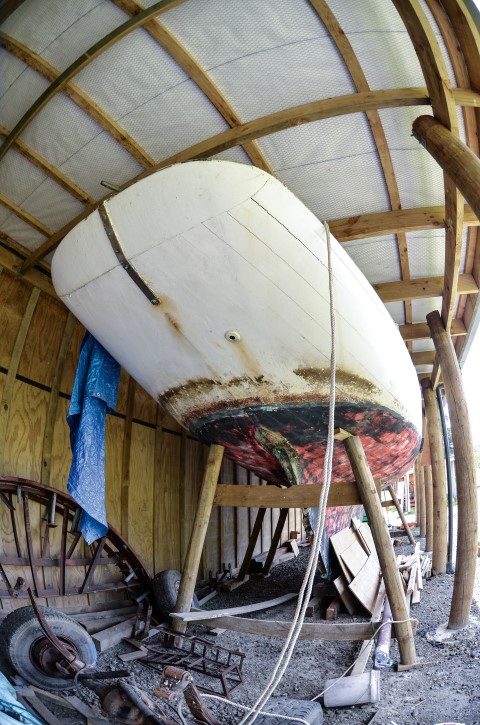 “In the grand scheme of things, this is not necessarily a bad thing, as she needs new keel bolts. The existing bolts are phosphor bronze, and while this alloy has excellent anticorrosive properties, it doesn’t have particularly good tensile strength. I’ll be fitting silicon bronze keel bolts.”
He will also build new spars, reverting to the original gaff configuration rather than the existing sloop rig.
Why the specialisation in vintage vessels?
“I am sure there will be – among your readers – those who find the entire classic restoration concept an oddity. Why spend so much time and money on an ancient, out-of-date design? Well, I guess I am like the owners of these boats – we believe we are dealing with a rich, fascinating and charming heritage that’s worth preserving.
“They are usually core examples of this country’s remarkable maritime legacy. I think they’re worth fighting for.”