After an extensive, five-year restoration, a lifeboat from one of the ships involved in the 1940 Dunkirk evacuation of 330,000 Allied troops is to return to the beaches – this time under her own steam – for the 80th anniversary of the legendary rescue mission. Story by Lawrence Schäffler.

The 27-foot Lady of Mann was lifeboat No 8 on the Isle of Man Steam Packet ship of the same name. Launched in 1930 the 3,104-ton, 372-foot vessel carried 10 clinker-built lifeboats (mahogany over oak frames), each certified to carry 45 passengers. Lifeboat No 8 was the only one with an engine and therefore best-suited to emergencies.
The sidebar (page 109) details the ship’s history and her fate, but when she was broken up in 1971 on the Clyde, lifeboat No 8 was saved and converted into a fishing boat/cabin cruiser. She adopted her mother ship’s name and spent the next 38 years fishing off the east coast of England. 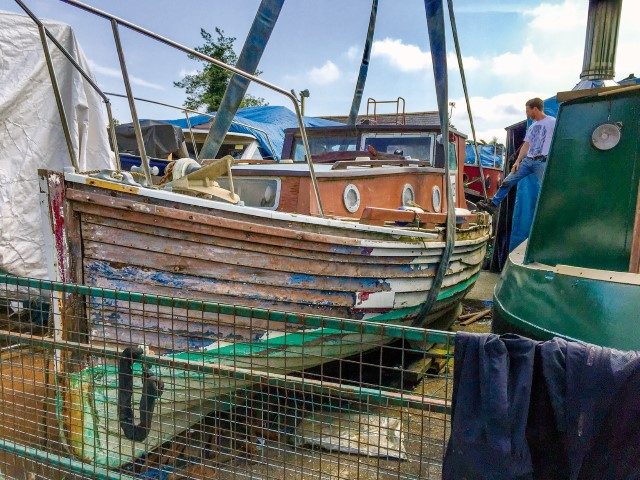 Inevitably, time took its toll and she fell into disrepair. But in 2009 Fate intervened in the form of Matt Cain, who found her advertised online. “Though relatively sound she was in a very dilapidated state and most potential buyers, unaware of her provenance, were interested only in her new, recently installed engine. The boat herself would be scrapped.”
She was lucky. A classic boat enthusiast connected by a strong family legacy to the Isle of Man, Cain was keen to save the boat. And the seller, fortunately, was also an Isle of Man Steam Packet enthusiast – and very aware of her heritage.
“He would not release her to anyone he felt wouldn’t try to preserve her,” says Cain. “Her hull lines were unmistakable –
I recognised her instantly – and the serial numbers on her stem confirmed her identity. I handed over £3,000 without hesitation or even a survey – unthinkable when purchasing a boat, let alone an 80-year-old wooden one!”
Cain took her home not knowing if he’d acquired a salvageable ‘project’ or a 27-foot garden ornament. But after a bit of remedial work she was once again serviceable, so much so that Cain spent several years cruising the waters around the Windsor area, and even participated in the Queen’s Diamond Jubilee Pageant in 2012, where the vessel was included in the Historic Lifeboat squadron. 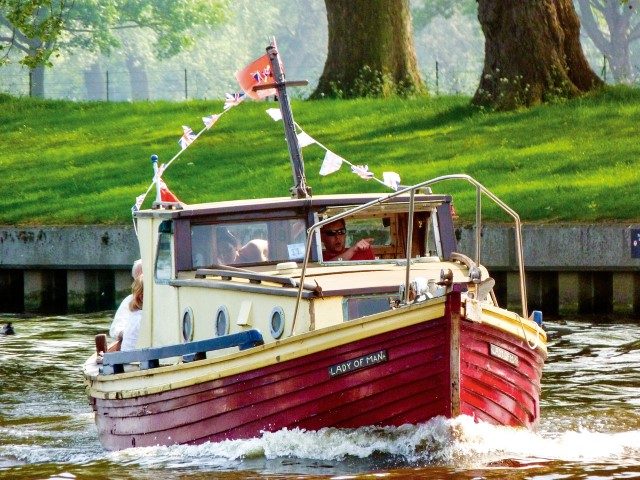 But the little lifeboat’s luck ran out in 2014 when she sank at her mooring during that winter’s terrible floods. “We don’t know the exact reason for her foundering,” says Cain, “but as an old clinker boat she would take on water and always relied on the automatic bilge pump. During that winter I was unable to reach her because of the flooding. I suspect with flat batteries and a dead pump she didn’t stand a chance.”
After much soul-searching Cain took the plunge and decided to salvage her. And though the original hull was still sound, the marine ply cabin (built in 1972) needed a complete rebuild. He opted to use a professional builder this time (Chertsey’s Michael Dennett Boatbuilders), instructing the company to try and replicate the 1930s pomp of the Lady of Mann mother ship. 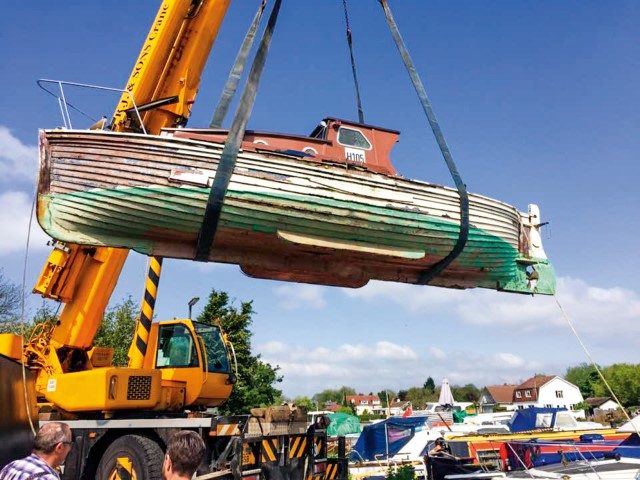 And the crew delivered spectacularly. Her authenticity retained, the lifeboat’s been welcomed into the Association of Dunkirk Little Ships and has represented the Isle of Man Steam Packet Company and her crews (flying the House Flag and Manx Ensign) at several Dunkirk commemorations. 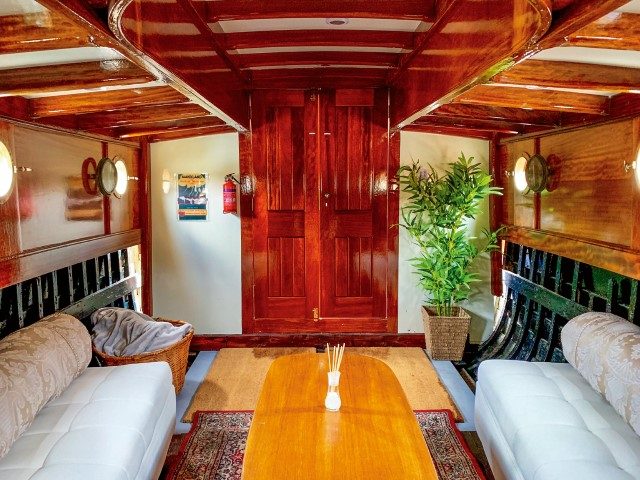 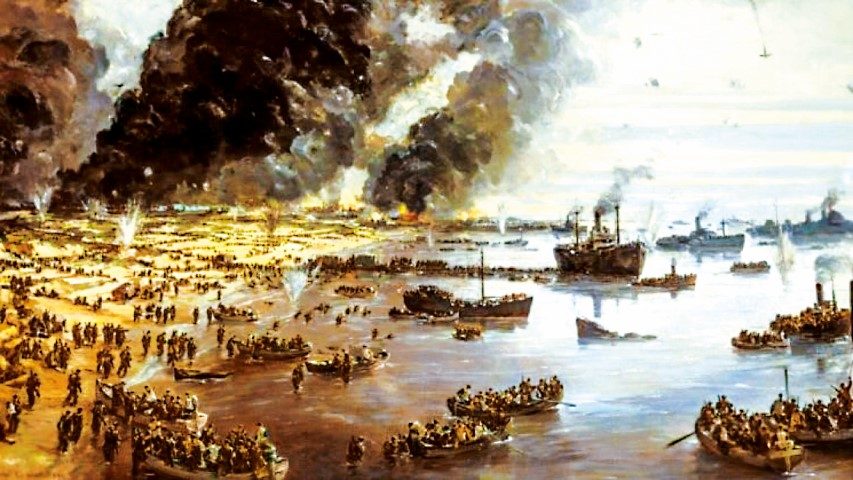 Established in 1830 the Isle of Man Steam Packet Company is the world’s oldest passenger shipping line still in operation, linking people on the Isle of Man with mainland Britain and Ireland.
The involvement of the company’s men and its ships during the Dunkirk evacuation is a source of huge pride to the Manx people. Eight company ships – including the Lady of Mann – took part in the mission and between them rescued 24,699 British troops – one in 13 of those evacuated from Dunkirk.
Their action is widely considered the company’s finest hour, but also its blackest. Sadly, three of the ships were lost and many Manxmen (all civilian seamen) were killed during the evacuation.
Built by Vickers Armstrong Ltd, Lady of Mann was launched in 1930 – the company’s centenary year – by the Duchess of Atholl, The Lady of Mann, after whom she was named. At the time the company’s largest ship, she was requisitioned as a personnel ship at the outbreak of the WWll and, because of her impressive turn of speed (over 23 knots) was able to get in and out of Dunkirk to lift 4,262 men back to England.
She spent six hours in Dunkirk on May 31 and, despite being shelled by shore batteries and dive-bombed she emerged with little damage and a claim of one aircraft shot down. She returned to Dunkirk on June 1 to take off 1,500 casualties. She was back again on the following day but was ordered out for lack of troops (although she did rescue 18 French soldiers from a small boat on the way back to England). 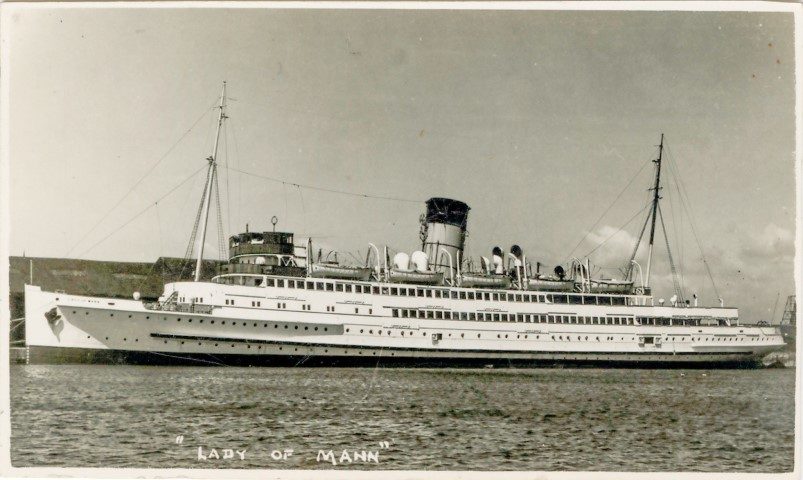 She made her last trip to Dunkirk in the early hours of the June 4, recovering 1,244 troops. The rescue mission – code-named Operation Dynamo – ended that afternoon.
But her war duties continued. In the build-up prior to the D-Day landings she was converted to an LSI (H), Landing Ship Infantry (Hand Hoisting), carrying six landing craft, 55 officers and 435 assault troops and took part in the landings at Juno beach as the headquarters ship for the 512th Assault Flotilla.
She retired for repairs later in the month and then returned to duties as a personnel vessel for the remainder of the war, moving troops and displaced persons across the Channel.
Lady of Mann was finally reconditioned and returned to Steam Packet service in May ‘46 after carrying an estimated 2,000,000 troops. She returned to the Isle of Man in 1946 and continued to serve the company until 1971.