Take about 7,500kg of carbon fibre and stainless steel, add 15 crew and thrash it round the Bay of Islands for a few days – that’s basically the recipe for racing a TP52 among the multifarious fleet at CRC Bay of Islands Sailing Week 2020. Story by Lindsay Wright, photography by Lissa Reydon.

It’s a bit like joining a team of players in our other national obsession. Kia Kaha (stay strong) fields a crew of 15, each specialising in a particular role to keep the big sled sliding through the water.
“Is there a toilet down below?” I ask one of the young cockpit crew. “I dunno,” he replies, “I’ve never been down there.” And likewise the engine, as we rattle down channel towards the start line. “Oh – a Yanmar of some sort,” says one of the wise heads from the back of the boat, “about 40 something horsepower.” 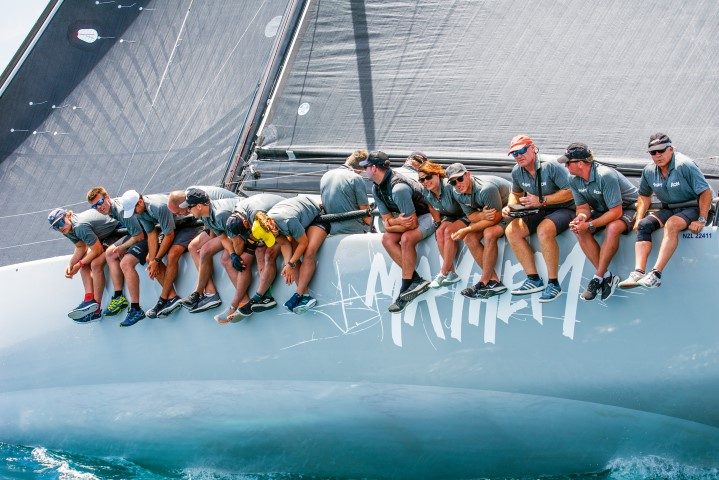 But when the boat gets sailing they slot into their roles – everyone focussed on extracting every little bit of speed from the TP52. TP stands for ‘Trans Pacific’ – the name given to the class when it was first launched in 2001.
“We wanted a boat that was fast and reliable for Grand Prix racing inshore and offshore,” one of the originators, Tom Pollack, writes on the class website. The offshore part of the equation was the TransPac race, a 2,225nm leg from California to Hawaii.
“This boat was built by Barcos Deportivos in Spain in 2005,” says owner/skipper Chris Hornell, “and raced previously as Lexus/Quantum, Bigamist and Valkyrie.”
TP52 class boats are built to a ‘box rule’ which allows them an overall length of 15.86m (52 ft), 4.43m beam, 3.5m draft and a weight 6,975kg – of which 3,800kg can be in the keel’s bulb. They’re allowed a spinnaker hoist of 22.4m.
Shortly after launching, Kia Kaha was campaigned by Team New Zealand and began an illustrious career of sailing with Kiwi crews. Hornell (52) bought the boat in San Diego and arranged to have her shipped straight to New Zealand – but in the event she meandered to Newcastle, Australia via Acapulco and Hawaii.
“It was pretty obvious we wouldn’t be able to get her shipped across the Tasman in time for Sailing Week in the Bay – so I got some old sailing mates together and we brought her back on her own bottom. She was the first proper, in-class TP52 in the country.” 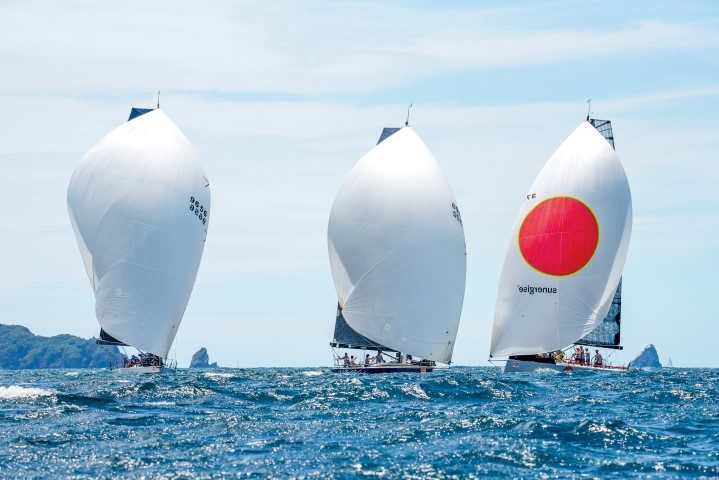 With a lifetime of sailing in the Bay of Islands, several Coastal Classics under his belt and races to Fiji, Hornell was no stranger to offshore sailing but doing it in a TP52 was different. “Talk about wet,” he grins, “but fast and great fun.
“People think these boats are expensive to run – but you can spend as much money on them as you want. I’ve got a few contacts with the TP52 fleet in Europe and get used sails and gear from them. They use a sail for one race and chuck it out.”
He and daughter Rebecca (Bex, 20) are entered in this year’s SSANZ Two-Handed Round North Island race.
Meanwhile, out at the start line most of the 140-boat fleet roll around in a low, glassy swell, tantalised by small williwaws of wind. The locals are relaxed though – they know the sea breeze will fill in eventually.
An awning materialises from belowdecks and we lounge in the shade, most of the crew finger punching their social media devices. Bay of Islands Sailing Week organisers encourage owners and skippers to invite promising young sailors aboard to get a feel for racing big boat style. 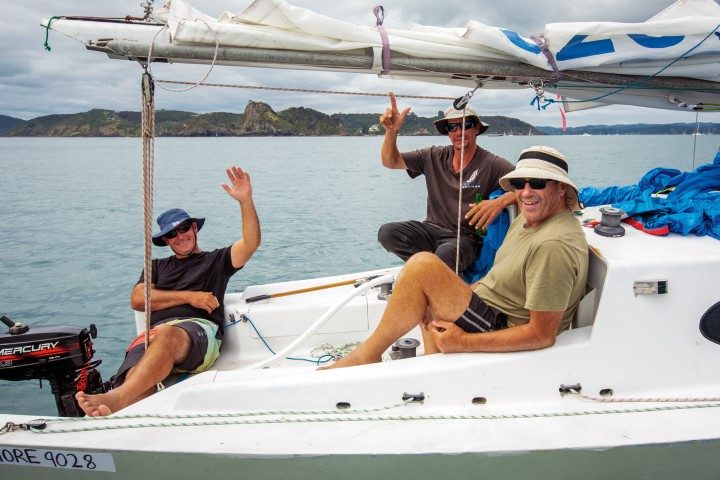 But then a crease of wind creeps across the water and the awning is spirited away and people sidle to their racing stations.
Almost every style of racing (or cruising) boat in the country is scattered around us, but the only ones that matter to us are Mayhem and Wired, Georgia and Miss Scarlet. The hard-working young crew on another TP52, Formula One from Tauranga, are right on the case.
“We’re just club racers from Tauranga,” skipper Carl Smith had told me earlier. “This was one of the first generation TP52s and was short of buoyancy in the forward sections. So we epoxied carbon frames around the bow, put foam between them and ‘glassed it in – sort of like sticking a trailer sailer on the front of your boat.”
Their foredeck crew is just 15 years old but works on deck with the confidence of someone much older. The boat hasn’t performed that well this time around but he says they’ll be back next year with more experience and know-how.
Soon the breeze has filled in to a steady 10 knots and gusting. Under full main and #1 genoa we charge over the line but it looks like the boats down at the pin end of the start line may have an advantage. The small boats soon disappear astern – even the multihulls – and the race becomes a scramble up to the windward rail, back for a few cranks on the mainsheet coffee grinder and then another lunge to join the crew on the rail. 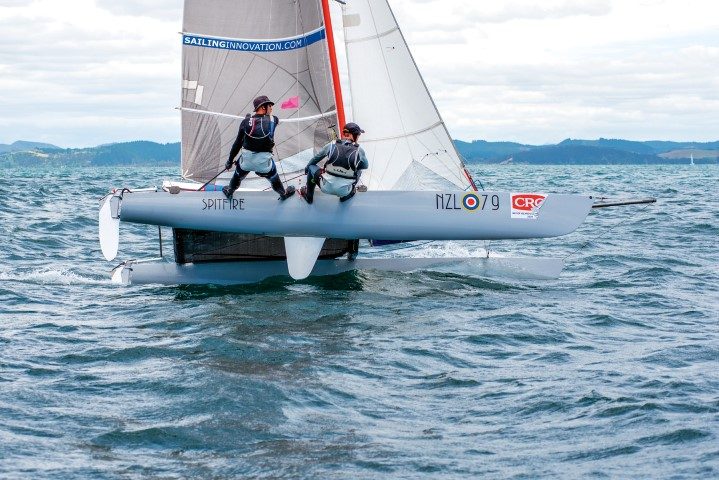 I’m impressed by how sensitive the boat is; even when all of us rail fodder shuffle a bum’s width back the boat noticeably accelerates or loses speed. At one stage my long legs get tangled round a stanchion at the start of a tack and my legs are trailing in the water for a few seconds before I get enough grip to recover my aplomb and launch myself across the boat to the new weather rail.
It’s exciting racing, neck and neck with similar boats.
I dive below for my camera – bad move. From bright sun-shine to the black, stripped-out carbon fibre interior – this leaves me functionally blind for a few moments and anyway, in this outfit there’s no time to take photos. But yes, there is a toilet, a baby Lavac further forward, but no time to use it.
We gallop around the course but can’t quite catch the fastest opposition who cross the line just ahead of us.
At last year’s Bay of Islands Sailing Week Kia Kaha took out the South Pacific PHRF Championship but the gods aren’t with us this time around. Instead the honours go to Mayhem – a 2008 Judel Vrolijk TP52. 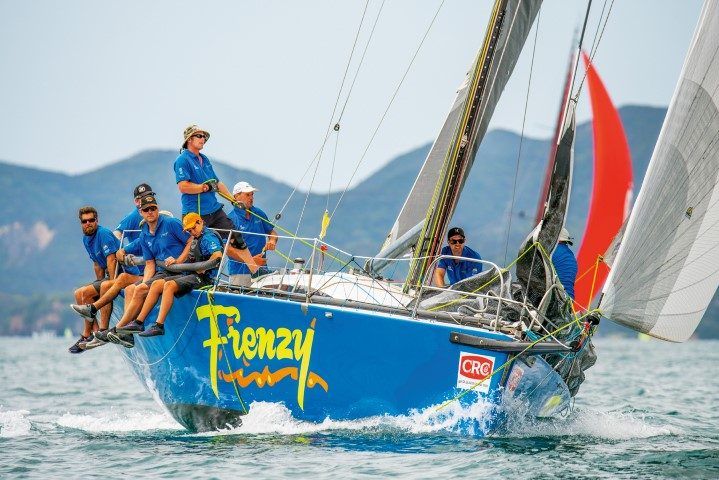 And on Kia Kaha the local boat with her local crew the awning is deployed for the motor home to the marina. She’s on the market and Hornell has plans to buy a smaller boat.
“I’ve got a few mates I’ve sailed with for 10–12 years,” he explains. “Sailing Kia Kaha has given me the opportunity to sail with a lot of younger people – but I just want to go back to a smaller crew.”
And there’s no doubt he’ll be back on the track with them.

No ice, no fish