A committed safety-at-sea advocate, record-breaking yachtswoman Dee Caffari MBE details her experience of falling overboard during a recent offshore race – hoping it will highlight the lessons learned for the benefit of other sailors. By Lawrence Schaffler.

Dee, who has circumnavigated six times, is the first woman to have sailed single-handed and non-stop around the world in both directions. She was competing in this year’s SoCal 300 ocean race from Santa Barbara to San Diego in May when the unimaginable happened and she found herself viewing the boat from the water. 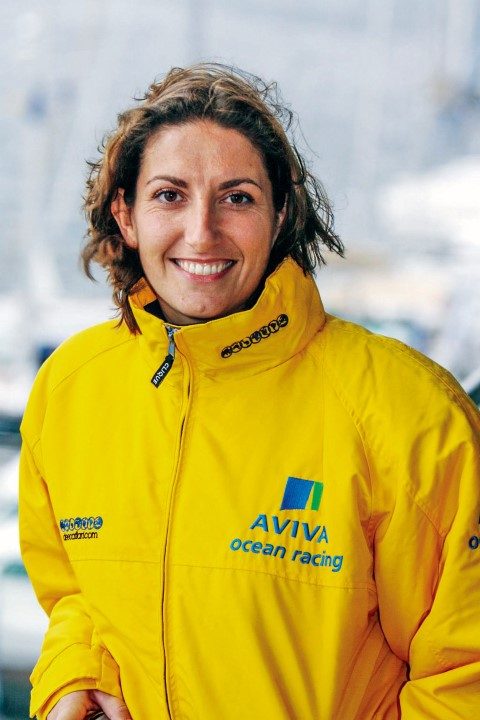 One of nine crew on a Santa Cruz 50, she was trimming the spinnaker while sitting, feet in, on the high side of the cockpit on a dark night at around midnight, with winds gusting to 30 knots, rough sea conditions and a boat speed between 16 and 22 knots.
She was wearing an Ocean Signal rescueME MOB1 man overboard device with integrated AIS and DSC attached to her Spinlock Vito Deckvest, but was not clipped on with her tether, despite the rule on the boat to always clip on at night.
Dee recounted in her blog: “We had a wave that knocked us into a big windward roll, I remember reaching out to the lifelines behind me to brace myself. As we came out of that windward roll, we started to heel the opposite way and the boat began to broach.
“I was easing the spinnaker as smoothly as possible to avoid an override and to help the helm gain control and ensure they could bear away again. As the boat continued to heel, I remember not having anywhere to place my foot to leeward to brace myself. It was then that I felt myself falling. I assumed I would land on the leeward side deck with my back against the lifelines. Instead I had cleared the lifelines and the next thing I knew I was viewing the boat and all the action from about 20 feet away in the water.
“I wanted to shout out to let them know where I was and that I was okay, but I was being pulled through the water by the spinnaker sheet that I was still holding onto. I decided to try and kick for the aft quarter of the yacht. At the same time, as I was flailing my legs around to try and move in the water, the crew onboard were dropping the spinnaker and driving the boat head to wind to slow down. This action facilitated my movement towards the back of the boat. I was able to grab the aft stanchion of the pushpit and I saw a familiar face of one of the crew.
“Once the spinnaker was secured down the forward hatch the crew came aft and recovered me from the water. I could sense the relief from those around me and this heightened my embarrassment. Once on the aft deck I could deflate my lifejacket to allow me more manoeuvrability and finally turn my AIS beacon off. This was strobing really brightly, obscuring my night vision and also causing a lot of noise on our DSC VHF that my unit had been programmed to. All exactly as you want it to.”

In a bid to raise awareness about the best safety equipment and procedures, Dee admits the fault was entirely her own for not clipping on with her tether. She stresses the need for crew training to act quickly for a speedy recovery, as well as a thorough debrief after any emergency to make necessary improvements.
She also emphasises the importance of wearing a MOB device to quickly alert the boat’s crew and other vessels in the vicinity when every second counts, especially in cold water.
“I would definitely recommend the Ocean Signal rescueME MOB1. I selected this product because it’s small and compact and fits into the lifejacket easily for automatic use. I also like the fact that it has AIS and DSC abilities.
Last year Dee completed the Volvo Ocean Race skippering Turn the Tide on Plastic – the second time she has led a crew around the world. In 2006, she became the first woman to sail solo round the world against the prevailing winds and currents and was awarded the MBE in recognition of this achievement.