What were you doing in 1996? At school? Advancing your career? Raising children? Aucklander Malcolm Steedman was beginning the conversion of his Pelin Snowbird sailing catamaran: a project he’d only finish at the end of 2020 – just in time to put her on the market. Story by Zoe Hawkins.

Moon Shadow – as she was then called – was a glass-over-ply sailing catamaran that Steedman describes as a little tired but which had carried his family on 13 years of sailing adventures.

When he decided it was time to sell, he hauled Moon Shadow out at Little Shoal Bay and soon realised that without significant work her resale value was low. But he felt there was another option: an ambitous conversion from sailing boat to power catamaran. 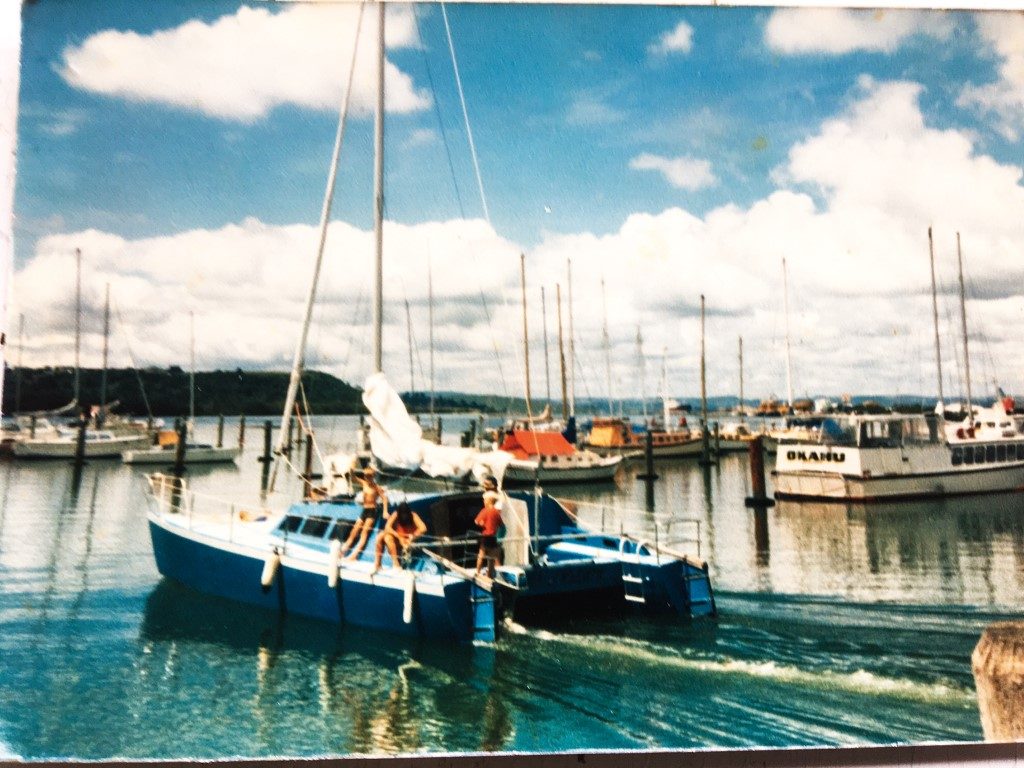 He contacted marine architect Kevin Dibley – then in the early stages of his career, but these days renowned for his design expertise across a broad spectrum of race and luxury vessels – for assistance.

Dibley was bemused to hear from us a quarter of a century later, and he remembers the project fondly. “I spent about four weeks working on this project with Malcolm – using photos as a reference,” he recalls. “We went backwards and forwards and built some preliminaries and he was off. I didn’t go into detailed design.”

The boat spent some 27 years in Steedman’s garden shed, but for him it was always an ‘alive’ project. One that was paused occasionally as time and finances required, but one he was always commited to completing.

A sign writer by trade, Steedman has a professionally-tuned eye for detail, and he wanted to do the job well. Once Dibley had provided fairly simple concepts – hand-drawn in pencil on vellum (the days before computers were used to assist design) – Steedman commissioned High Modulus to finish the detailed design and to create the specifications for the fibreglass and foam components. 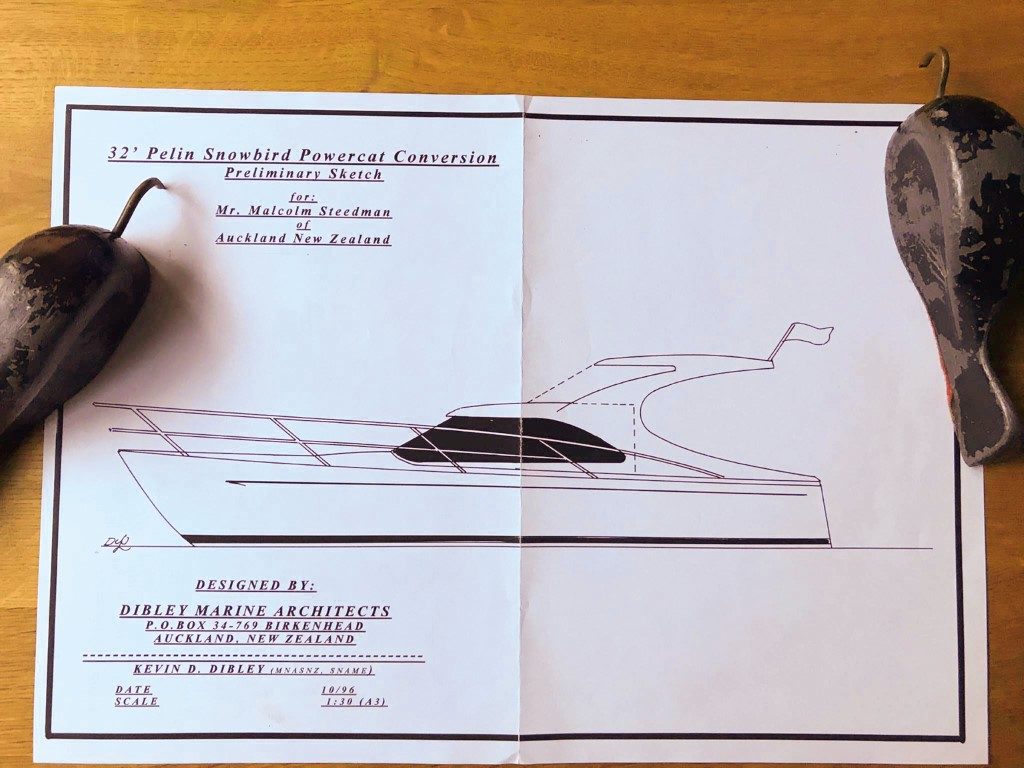 In a letter dated 1 Novemer 1996, Dibley writes: “The biggest obstacle to get over is the need for increased displacement due to additional superstructures and weight, as well as a practical but aesthetically pleasing look. The displacement increase is relatively easy as we can eliminate the amount of rocker aft and allow for straighter buttock lines accordingly to assist in the speed requirements…The aesthetics are a bit more difficult due to the low freeboard and reuired headroom.”

He went on to recommend adding volume in the aft area, straightening the line of the hull. A metre of length was also added, and more striking lines devised for the topsides.

The end result is a highly-efficient and goodlooking cat weighing 3,500kg that has surpassed expectations by achieving 27 knots of boat speed from its two 135hp Honda outboards at 4,500 revs – a figure Dibley, all these years later, is seriously impressed by.

“I believe it, looking at the pictures of the waterline and the waves coming off it. The hulls are narrow with good height between the bridge deck and the water. Good on him, that is impressive.”

Though purchased 10 years ago, the Hondas sat in their crates until installation, receiving new fuel pumps before fitting because the fuel left in them by the factory had solidified.

With her twin hulls, the boat is a large, stable platform and a family-friendly cruiser: she has two single cabins fore and aft in the port hull, one aft in the starboard hull, and an athwartships double cabin in the space between. 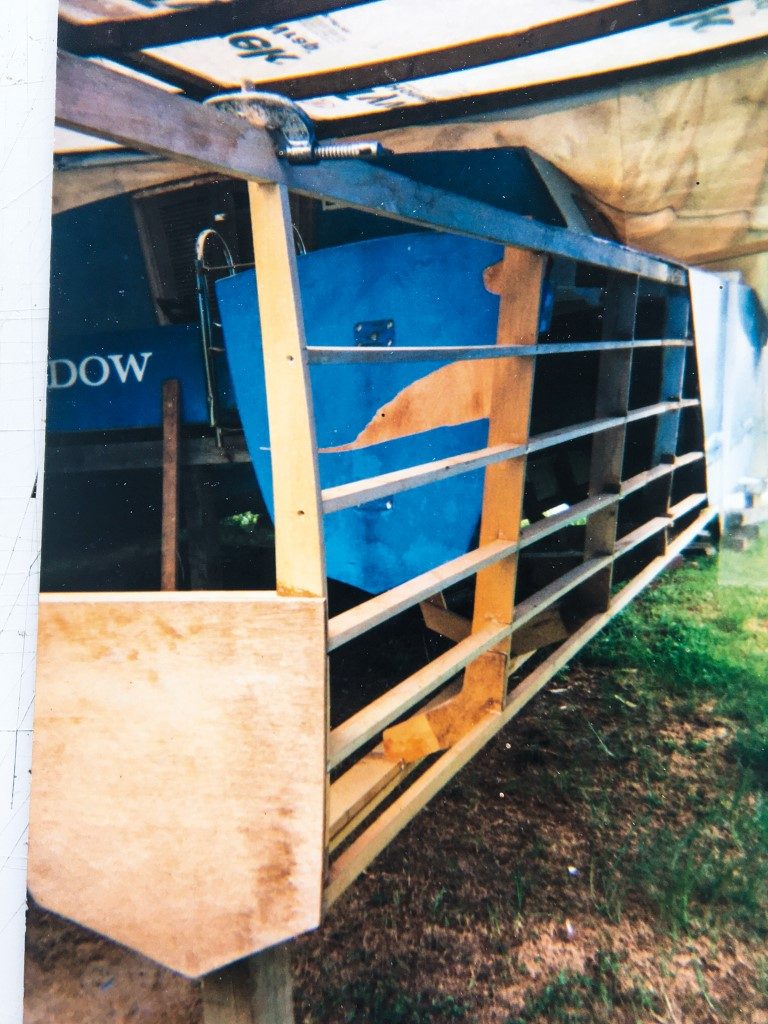 Though the bathroom has full headroom in the forward hull (with plenty of space to conduct ablutions), you do have to bend down to access it. A 700-litre freshwater tank allows extended voyages.

With the 4.95m beam, the bridge deck is a spacious, open area that provides a kitchen, dinette, and a free flow onto the aft deck. This aft area has flexible seating for relaxing and socialising, whatever the weather. Twin trampolines up front offer an exhilarating ride for guests, and it’s also a good area for sunbathing at anchor. 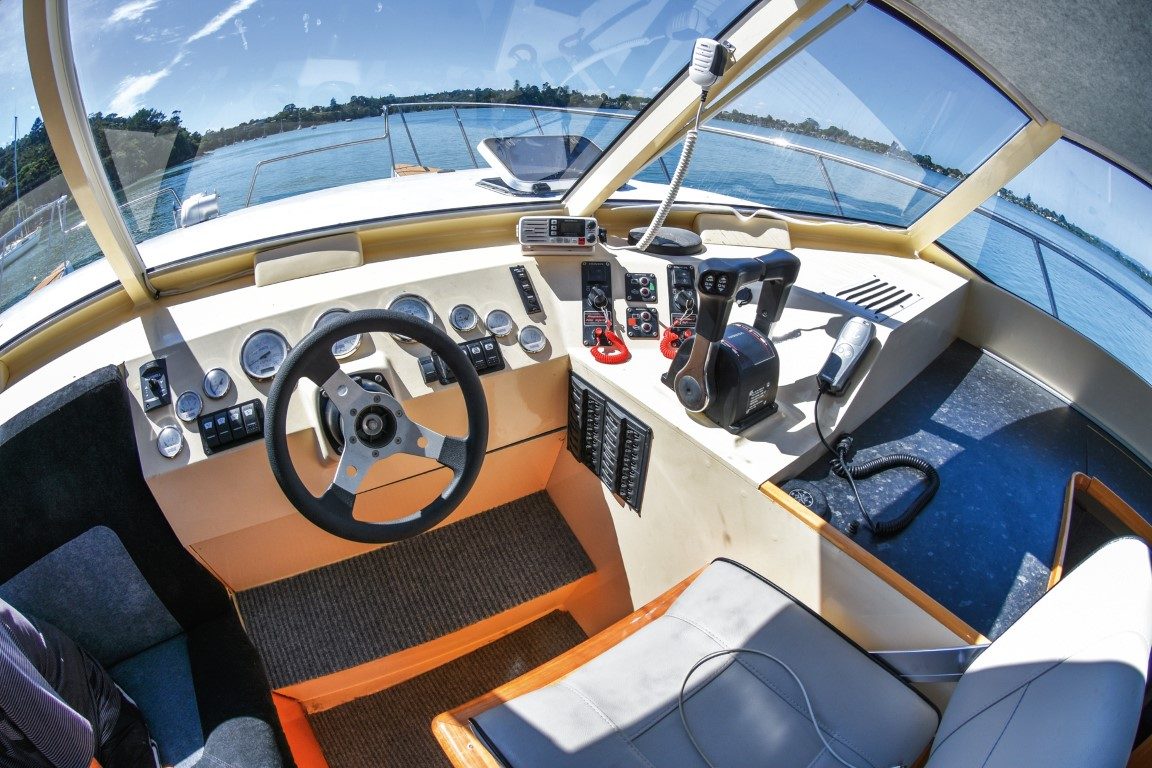 The interior finish is testament to the weeks, months and years that Malcolm spent on the project – mostly sanding. It is minimalist and functional, no doubt easy to live in, easy to clean and to keep tidy, with a neutral colour palette and varnished timber cabinetry. The kitchen bench sits on a hydraulic hinge – this allows relatively generous space for food prep but lifting the benchtop makes accessing the starboard hull much easier.

Looking at Way Maker now, it’s hard to imagine her Pelin Snowbird heritage. And Steedman far prefers her new lines – “It’s what I dreamed of. Sleek and modern.” 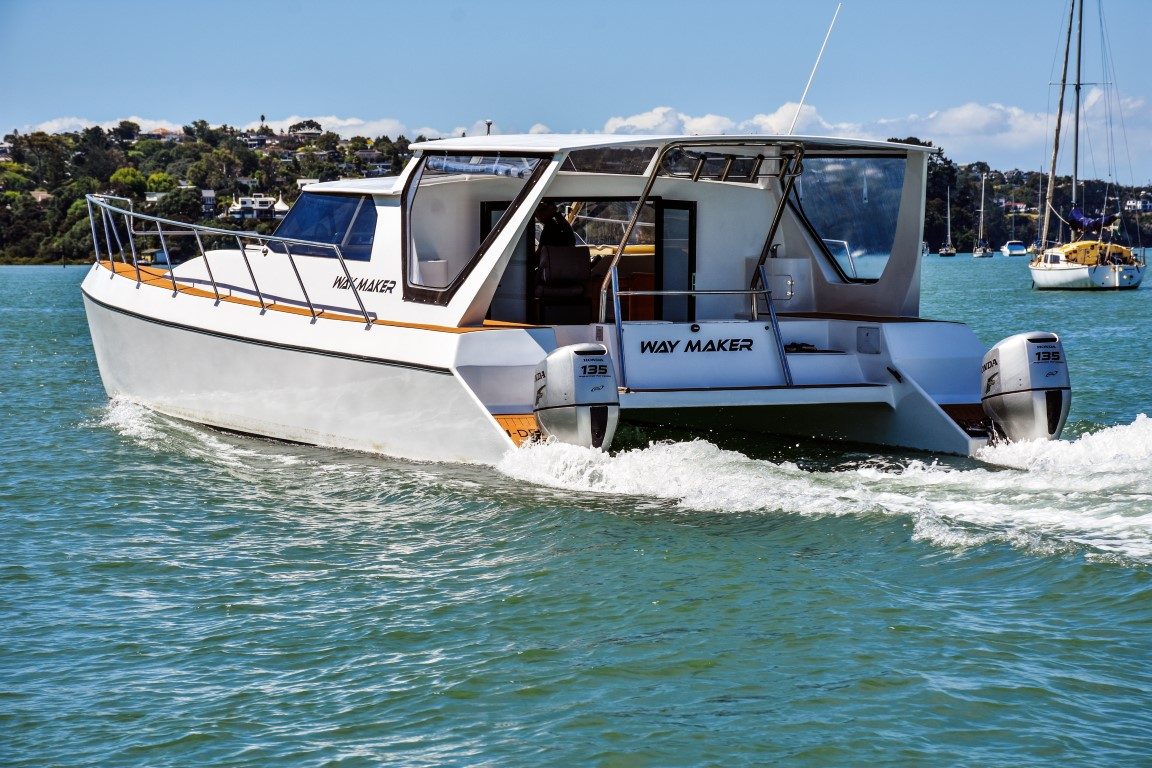 While he enjoys using the boat to explore the Hauraki Gulf with his family (when he can), he plans to sell Way Maker. He was 45 when he embarked on the conversion, he points out, and he thought the project might take five years. All these years later, priorities have changed.

But he doesn’t have any regrets, and will make the most of Way Maker until the day she sells.