Pastime is one of the few South Island 19th century yachts to have survived in anything like her original form. She was built at Lyttelton by Malcolm Miller in 1886 and is now well into an exciting authentic restoration. By Harold Kidd.

Malcolm Miller was a Scot, born in 1838 in Lochranza, a small herring fishing village on the northern tip of the island of Arran in the Firth of Clyde. Like many Scots, he emigrated to Dunedin in 1862 at the height of the Otago Gold Rush. He set up in business as a shipwright in Invercargill initially, where he married Mary MacDonald in 1863.

He later moved to Picton, Greymouth and Whanganui, but finally settled in Lyttleton in 1874. He built a shed and slipway at Corsair Bay to the west of the main port where he carried on the business of a shipwright and boatbuilder very successfully, later with his sons. He also became well-known for his skill as a yachtsman.

The Millers shifted their yard from Corsair Bay to Godley Quay, near the Lyttelton dockhead in 1907. When Malcolm died in 1909 his eldest son, Malcolm James (‘Jimmy’) Miller, took over the business. He was already heavily engaged in property matters and was the Mayor of Lyttelton in 1910-13. 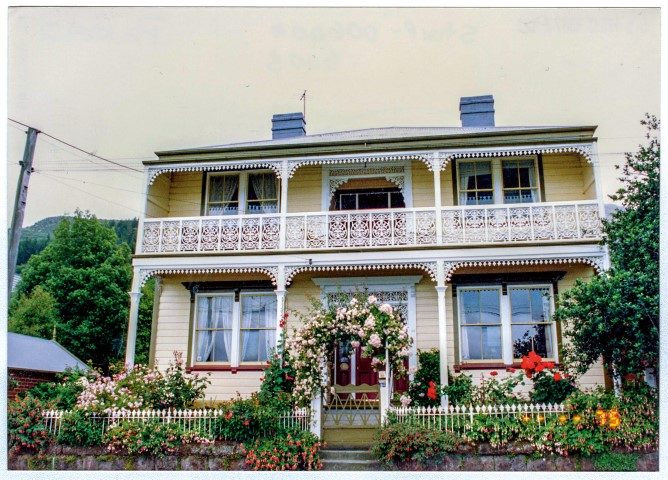 In 1889 he had built a substantial home named Lochranza at 14 Godley Quay which still stands today. Jimmy sold the business to his younger brother, John Daniel Miller in 1913. The yard then traded as J. Miller Ltd but John died in 1920. John’s eldest son William Alexander Miller had lost a leg in WW1 but took over the business on his father’s death. He had an able foreman in Magnus Smith.

Incidentally, I don’t know of any connection between the Lyttelton Millers and the Scots Miller brothers who were contemporary boatbuilders at Port Chalmers, later becoming Miller & Tunnage. 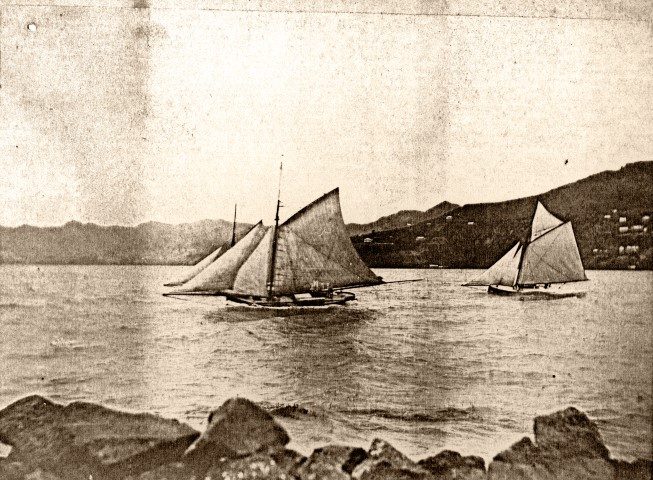 Organised yachting had started in Lyttelton very early. By 1851 the Lyttelton Regatta Committee was holding events for rowing and sailing and by 1858 it had become a successful public spectacle on New Year’s Day with significant prize money and a big volume of wagering on the side. Akaroa, too, had a well-established annual regatta.

When Malcolm Miller set up at Corsair Bay in 1874 the pleasure boating content of the shipwrighting trade was becoming significant. There were several long-established shipwrights on the harbour catering for the repair of overseas and local sailing ships and constructing fishing vessels, but only two were involved in yachts – William Sinclair and his son James, and Tom Westlake.

Malcolm Miller’s first venture into the competition scene was in the ‘Interprovincial Champion Race’ for four-oared whaleboats in the 1876 Lyttelton Regatta for a cup and £50 with his Ringarooma in which he rowed stroke and son Jimmy, at 12 years of age, was cox. Despite allegations that she wasn’t a genuine whaleboat, Ringarooma and the Millers won that year, again in 1877 and came second in 1878. 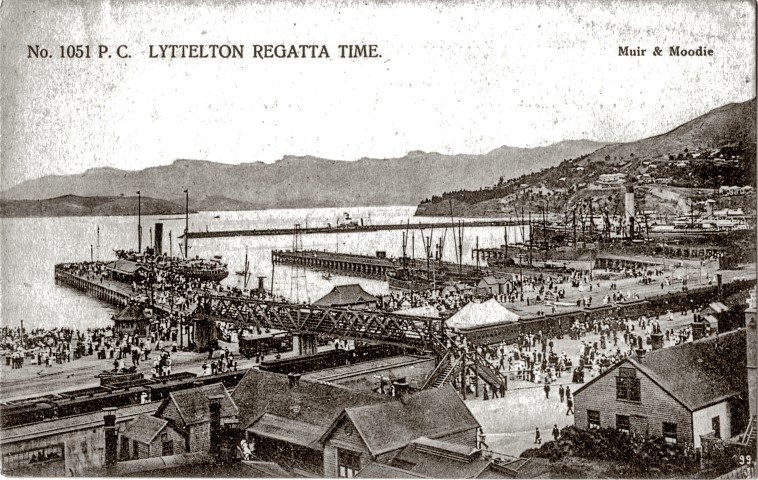 By the early 1880s the Lyttelton Regatta was losing its appeal to the public. The major yachts of the period were either past their prime or second-rate. Out-of-town yachts like Xarifa, Thetis and Isca from Wellington or Zephyr and Spray from Dunedin found it worthwhile to sail to Lyttelton and have their own way for the prize money of £50.

The 1886 Regatta on New Year’s Day showed an upsurge in interest in the Allcomers’ Yacht Race for £35 and a cup.

E.C. Batkin’s Dixon Kemp-designed Isca came down from Wellington, the Green-built Zephyr came from Akaroa to compete with the local cutters, Surprise from the 1860s, Fleetwing, a 33ft 10-tonner built by Chas. Bailey Sr in 1872, and the new local yachts Neva, an 8-tonner built by Westlake, Gowan, a big centre-boarder built by H. Hutchinson and Try It, the latter a converted ship’s boat!

But another new Lyttelton yacht was head and shoulders above its fellows in innovation and speed. This was Jimmy Sinclair’s Little Wonder, a lightly built centre-boarder with a stacking board for the crew, presaging Uffa Fox’s International Canoe of 1932. In the following month the Canterbury Yacht Club was formed and had its first race on 31st March. The temperature was rising.

The rival Sinclairs’ impressive Little Wonder persuaded Malcolm Miller that it was time to get involved in yachting by building a keel yacht to beat her. In the meantime he had an order from W.B. Tosswill of Akaroa for a 24ft centre-boarder to challenge the Lyttelton boats. 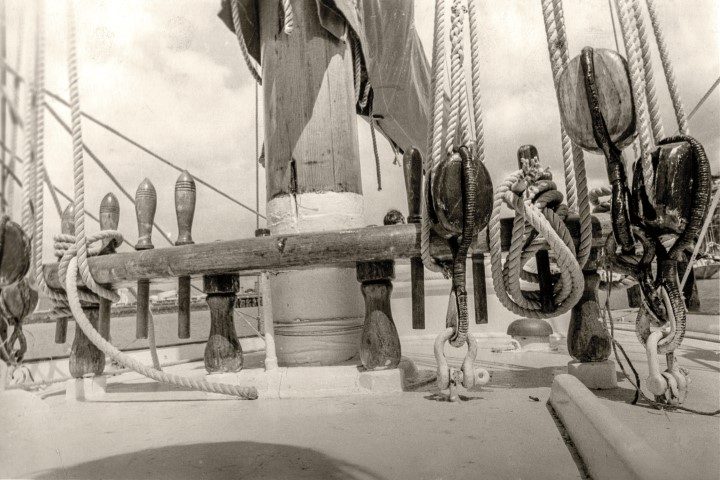 Miller launched Tosswill’s Wave in May 1886 and turned to a new yacht for himself during the winter of 1886. This was the 30-footer Pastime, described as follows by the Lyttelton Times reporter in September 1886.

“Mr M. Miller, of Lyttelton, has nearly completed the hull of the new carvel-built 5-ton yacht, which promises to be one of the fastest boats in Lyttelton Harbour. She is built of the best picked kauri, with red birch timbers and jarrah keel. She has been carefully built, every effort being made to give the boat sufficient strength, and iron floors have been put into her to support her lead keel.

“The yacht will be coppered and copper-fastened throughout, there not being an iron nail in her composition. Her dimensions are as follows; length 28ft 11in over all, and about 25ft on keel; beam, 7ft 2in; depth inside, 5ft; draught, about 4ft. She will be ballasted with lead, about 17cwt of which will be for a lead keel; the remainder about 2 tons, will be carried inside. She will be cutter-rigged, with a pole mast 21ft 6in above the deck.

“Her mainsail will measure 19ft on the hoist, and 24ft 9in in the boom; bowsprit length 17ft out board. The new boat is built with a sharp floor on a nice model, that should give her plenty of speed. The boat is, we understand, for sale, and should be a hard nut to crack in the cup matches this year.” 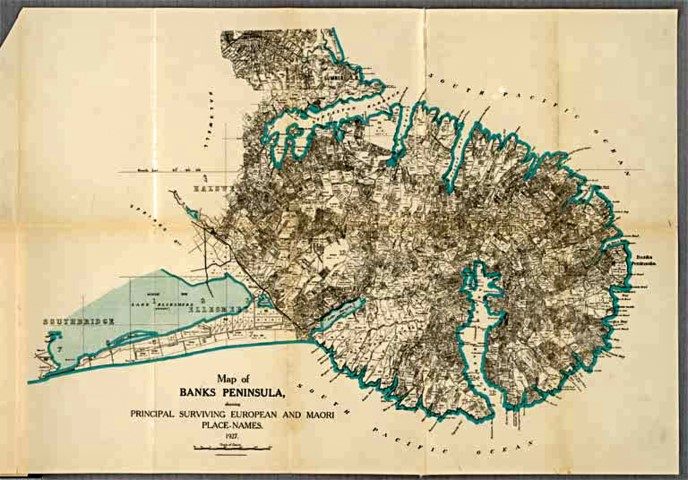 On 27th October 1886 the same newspaper recorded that her keel was run and bolted on, her coppering complete and her spars were ready. The first race of the new season for the Canterbury Yacht Club, and for Pastime, was on 13th November, only days away.

But the race, the first of three heats for the Cameron Cup, was cancelled because of a nor’west gale. It was run again a week later in light conditions. Pastime and Little Wonder were on scratch. Pastime got a bad start and was beaten to the finish by Little Wonder by just over two minutes; but it had been a good race to stretch in her new sails.

In the second heat a week later, in a strong nor’easter, Pastime beat Little Wonder, showing herself better to windward in a blow. The third heat was sailed on 11th

December in a fresh sou’west breeze. Pastime and Little Wonder were joined on scratch by the old Fleetwing, with Neva on five minutes. The

light Little Wonder cleared away from Fleetwing after the first mark and was never headed. Miller sailed a bad race in Pastime finishing over eight minutes behind the leaders.

The next race was the Yacht Race at the Akaroa Regatta on 16th December. The line-up was Little Wonder sailed by Jimmy Sinclair, Pastime sailed by Malcolm Miller, Fleetwing sailed by the skilled yachtsman and engineer, R.J. Scott, and two Akaroa yachts, Chance sailed by G.J. Black and Campbell Brown, and Zephyr sailed by T.S. Baker. There was a very light northerly wind. 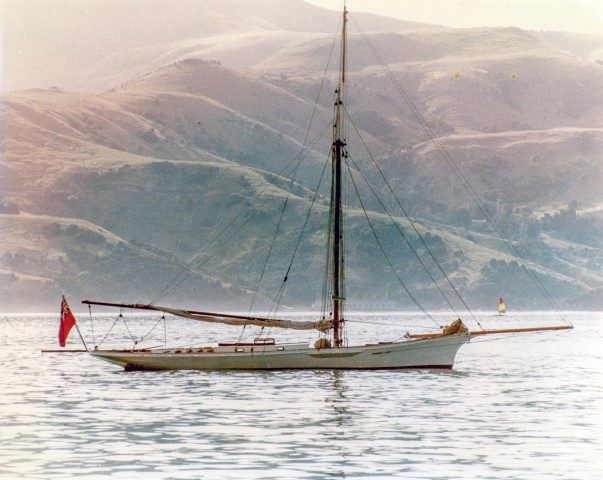 Pastime took the lead early but Little Wonder got the benefit of a wind-shift and came in first, well ahead of Pastime and Fleetwing which was flying a protest flag, claiming Malcolm Miller had hit a mark. Miller was unhappy with his mainsail and telegraphed for a new one from Auckland as soon as Pastime got back to her home moorings.

The final race of 1886 was for a pair of vases presented by G.J. Black of Akaroa when Pastime came second to Little Wonder again, Fleetwing third. Days later, was the big event, the Lyttelton Regatta First-class Yacht Race on New Year’s Day. In good sailing conditions, Little Wonder ran away out front, leaving Fleetwing and Pastime to have a tussle for second, Fleetwing getting there before Miller’s yacht, with Baker’s Zephyr last.

Malcolm Miller had a lot to think about.