Motuora Island in the Hauraki Gulf has been inhabited since the first arrival of Maori. In te reo its name means ‘the island of well-being.’ By Harold Kidd.

It’s a stunning 80-hectare island lying between the northern entrance of the Mahurangi Harbour and the southern entrance to Kawau Island. After John and Charlotte Chandler bought it from Sir George Grey in 1880 it got the name ‘Chandler’s Island’. Coastal skipper George Samuel Emtage was closely associated with the childless Chandlers and lived there almost continuously from 1892.

George was born at Bridgetown, Barbados on 29th May 1859 and went to sea at the age of 12. He arrived in Auckland in the full-rigged ship Golden Fleece in 1874. He was mugged and robbed ashore and the ship sailed without him. He survived by doing harsh bushwork in the forest of Great Barrier Island but later went to sea in coasting cutters. After serving in 14 vessels he received his Master’s Certificate. By the time he retired he had served in 39 ships; he was master of nine coasters and mate on the steamers Tam O’ Shanter and Rose Casey.

By 1880 George was the Master of the cutter Whangarei. He married Maude Ann Ragg in 1883 at Mahurangi. Maude’s father was Captain Joseph Higginson Ragg, a settler at Mahurangi. Like most seamen of the time he filled in slack periods with farming and fishing. He and his son ran the cutters Mary Ann, Wanderer and Jane. 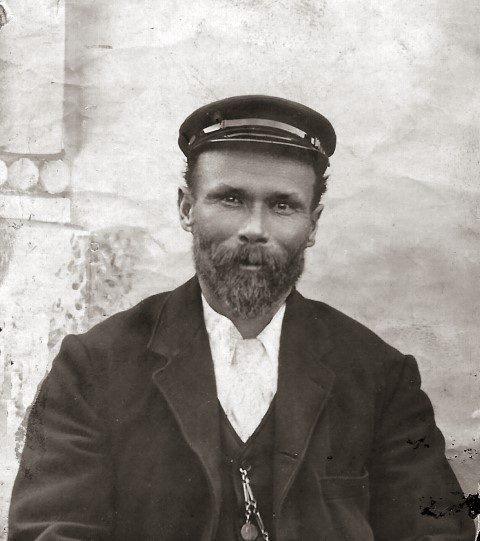 For a period from 1899 George came ashore and ran the farm on Motuora with Maude with their nine children, several born on the island. They supplemented farming, originally sheep, with commercial fishing in its abundant waters for the Mahurangi and Warkworth markets. George ran regular trips to Warkworth during the summer months with a “good supply of fresh and smoked fish on Mondays and Wednesdays”.

Then, in March 1901, George took an active part in a highly successful revival of the Mahurangi Heads Regatta, alongside the well-known local figures W.J. Wilson of Wilson’s Cement, C.H. Lushington of the fine house ‘Rodmersham’, W.A. Darrach, J. Raynes, A.D. Grant and S.Scott, assisted by C.P. Murdoch, Vice-Commodore of the Auckland Yacht Club.

Many of the crack Auckland keel yachts made the trip and put the event on the Auckland yachties’ calendar. The Mahurangi Regatta continues to flourish today on Anniversary weekend. In 1901 George entered his little clinker fishing smack Lily. But after the Regatta George seems to have caught the bug for ‘proper’ yacht-racing.

During the winter of 1901 he commissioned a new 24ft fishing mullet boat from Bailey & Lowe, the top builders of the time, which he named Spray, launched in September 1901. George sailed her down to Auckland to compete in the Ponsonby Regatta on 7th December.

In the race, which included 26-footers, she was on scratch and came in second behind the old crack, Venice, sailed by the wily Portuguese fisherman, John Lomey. Controversy swirled as Gallagher, in his new 24-footer Belle, was the only one to sail around the course observing fairway marks.

Spray’s next race was the January 1902 Auckland Anniversary Regatta Fishing Boats Handicap. On two minutes, George sailed a good race, coming second to the bigger Annie. Spray took part in every subsequent Ponsonby Regatta, among other Auckland and Mahurangi races, gaining the reputation of being a crack 24-footer.

When the Chas. Collings-designed 24-footer Glady was launched in December 1904, her owner, J. J. Mackay, immediately issued a challenge to Spray for a match race. Nothing seems to have come of it, probably because there was a significant difference between the gear and finish of this brand-new yacht-type Glady and that of the three-year old working fishing boat Spray. By 1905 George had sold Spray to Albert Sanford Jr, of the famous Auckland fish merchant’s family, who also issued challenges for match races with this highly competitive boat.

After Charlotte Chandler died in 1906, George inherited Motuora. He advertised the island; “FOR SALE – A Nice Little Island Home, situated in Hauraki Gulf, known as Chandler’s Island containing 197 acres: good fertile soil: all ploughable, and in English grass – Apply G.S. Emtage, Warkworth”, but there were no takers it seems. However, Reg Collins, an older brother of local photographer Tudor Collins, and the later owner of the scow Jane Gifford, rented the island and bought the 24-footer Manola to service the farm in late 1912.

Charles Bailey had built Manola in 1885 for architect William Holder in the form of an Auckland mullet boat, or ‘smack’, but as an out-and-out racing yacht to clean up the big prize money being offered at the various Auckland Regattas.

She had ‘yacht’ gear and was sailed by the very best fishermen skippers, from Barlow Madigan to Charley Nelson.

After many seasons of phenomenal success she became outclassed by newer rivals in her style.

In 1910 George had gone back to sea in command of the Wilson Cement Co.’s cutter Will Watch which ran between the works at the head of the Mahurangi River at Warkworth and Whangarei, with cement up and Kamo coal down. It was announced when he resigned from the Will Watch in July 1912 that he intended “to devote his attention to work on his Island outside the Mahurangi Heads”. He bought Manola from Collins and used her to carry his farm produce to Warkworth.

His eldest son Bill was working for the Wilson Cement Company as a foreman. A younger son, George Samuel Emtage Jnr, worked with him on the island’s farm. In October 1917 George Sr appealed for the exemption of George Jnr from military service on the grounds that George Sr could not manage Chandler’s Island without the aid of his son who did all the ploughing, boating and heavy work.

There was no harbour and the beach landing place was not easily reached by boat. They ran 200 sheep and stock and also milked cows. Sheep were punted to Warkworth. Major Whitney of the Colonial Ammunition Company wrote supporting the appeal and pointed out the difficulty of landing on the island.

George Jr carried on farming effectively. After Parry Bros set up their Dairy Factory at Pukapuka on the Mahurangi he introduced a dairy herd, built a milking shed on top of the hill, separated the cream, sent the cans down the hill on a wire, rowed them out to Manola, and delivered them to the Parry Bros’ launch Glyn Bird inside the Heads, missing very few days through storms.

Lincoln Wood comes into picture here. He ‘retired’ in 1930 at the age of 31 when the Great Depression began to bite and he lost his job. Fred Mann of John Street Ponsonby built him the Harrison Butler 22ft shortender Memory with which he roamed the Hauraki Gulf. He was a frequent visitor to the Emtages, doing odd jobs.

George Sr died in April 1937 leaving the island to George Jr so long as he looked after his mother. He left Manola to his son Joe who was at sea on the Port Fremantle. Caught up in the Spanish Civil War and then WWII, Joe was unable to get home until 1945, by when Manola had rotted away in the mud at Warkworth. With advice from Lincoln, in 1938 George Jr replaced Manola with the able 24-footer Zoe, built in late 1909 by Bailey & Lowe for Charlie Garlick. Lincoln supervised the installation of a Bates diesel in Zoe.

Another son Albert used the launch Ila for fishing and gathering oyster shell for fowl grit. In Ila he rescued Erling Tambs and his family when the Norwegian’s Colin Archer double-ender Teddy came ashore on Challenger Island in a calm.

During WWII farming the island became impossible as the coastal trade shut down. George and his family left in 1942. Maude died in June 1945. George sold the island in 1946, ending the Emtage family’s long association with Motuora, an era of epic hard work that it would be hard to imagine men and women undertaking today.