Your accountant, partner and golfing friends will all tell you that with boats, chartering is better than buying, and buying second-hand rather than building is common sense. But common sense can be very unsatisfying, writes Stewart Halliwell.

The idea of building a boat is like a cloud that hangs over you until it’s done.

I’d built a Canadian canoe and a Phase 2 yacht in GRP and worked in the GRP supply business. I was a passionate sailor and had crewed on numerous racing yachts.

I’d previously owned a Laser and a Whiting 16 trailer-sailer. But the desire to build a unique yacht – my yacht – was always there.

I’d met designer Greg Elliot a couple of times – once on his boat Party Pro – reverse sheer, big cockpit with side trenches and a cavernous (mostly empty) interior. Inside and out, this yacht looked like no other. Over a few beers he shared his ideas on design – a key one being that a yacht should sail on, not through the water. 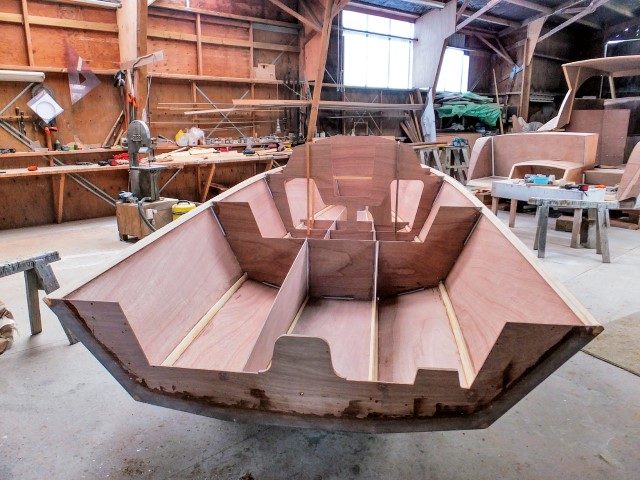 Fast forward a few decades. The empty nest syndrome had reignited the building-a-yacht idea. I liked the simplicity and backyard accessibility of the Hartley 16, Mullet boats and the Pied Piper – but thought it best to distill these classics into a modern design equivalent.

A yacht that was easy to build. That meant hard chine ply, a trailer-sailer that was cheap to store and take to a shallow beach. It should be easy to launch – that meant no bulb. A fully-retractable centreboard and rudder would allow it to dry out on a beach. It would have a cockpit big enough for four. Cabin space wasn’t critical.

About 22ft LOA seemed suitable for all of this. It needed to sail well upwind and plane on a reach. A small outboard would live in a well. I imagined a yacht looking like a sport boat that could be used like a beach sailing dinghy, lowcost and fun to sail. I considered twin rudders but realised I’d look like a nutter attempting to build a miniature IMOCA in plywood.

I listed all the key elements in a spreadsheet, ranking them by desirability – low, medium and high – and I spoke with a couple of designers about these ideas. Most were offhand, I guess because there’s not much money in a small, oneoff design with a limited budget.

But Greg reviewed my spec and thought the 6.7m length was a sweet spot for the weight and loading that would cover performance, crew capacity and ease of build. A few weeks later he came up with lines for a five-panel ply hull that looked great and could be produced in a CNC flatpack. Two topside panels, three bottom panels with a central V panel running from the stern finishing at a point at the bow knuckle.

Without a sizeable garage, a home build was not feasible. Greg had a mate with factory space – I had a boatbuilder mate who was between jobs. I was almost there.

But then a lot of work issues (excuses) complicated things, so the idea went on the backburner. Still, I kept going back to the spreadsheet. I spoke with boatbuilders and received quotes ranging from $22k to $40k for the bare hull. 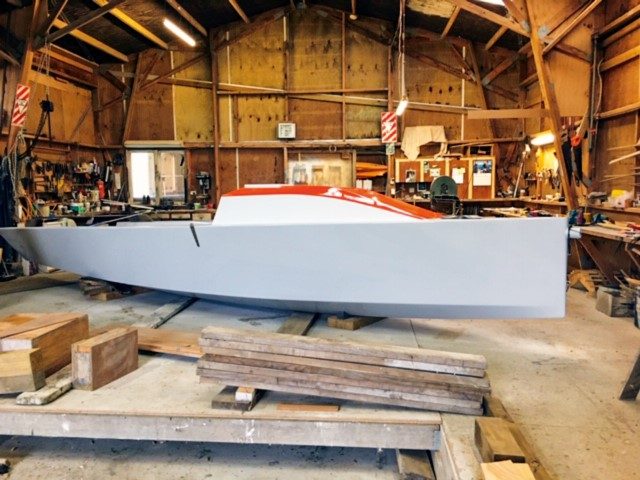 This was going to be an indulgent, vanity project. Would I live long enough to get value out of it? Like the charter vs ownership/build vs buy second-hand argument, accounting analysis doesn’t provide satisfactory answers.

Then I met Dave Wade and visited his boatbuilding shed near Warkworth. Dave was finishing a 9.5m launch and was looking for a new build. He’d built an Elliot 60ft schooner so knew Greg and his design ideas. Dave couldn’t give me a price – only the riddle that “the second one he built would be half the price of the first…” My TT22 sparked his interest. I’d christened it TT22 for ‘Takatu Tourer’ as this would be the coastline where she would be used.

Dave introduced a few mods of his own and Greg added a few ideas – so it didn’t get the outboard or anchor well, nor the drop rudder. Dave bought a rotten old Joker trailer sailer for peanuts. The trailer, rig, sails and deck-gear could all be used – a great way to keep the costs down. 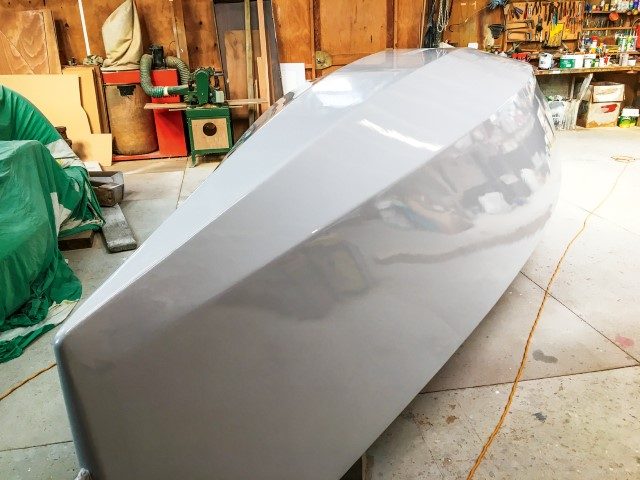 And he incorporated some clever ideas – like halyards going below decks through the mast-base (though still very accessible from the cockpit), making for a clear cabin top.

Seeing her floating on her lines, transom kissing the water and the bow knuckle 50mm clear of the water was very satisfying. She was tender but that was expected – this was a sailor’s yacht, not a motorhome. 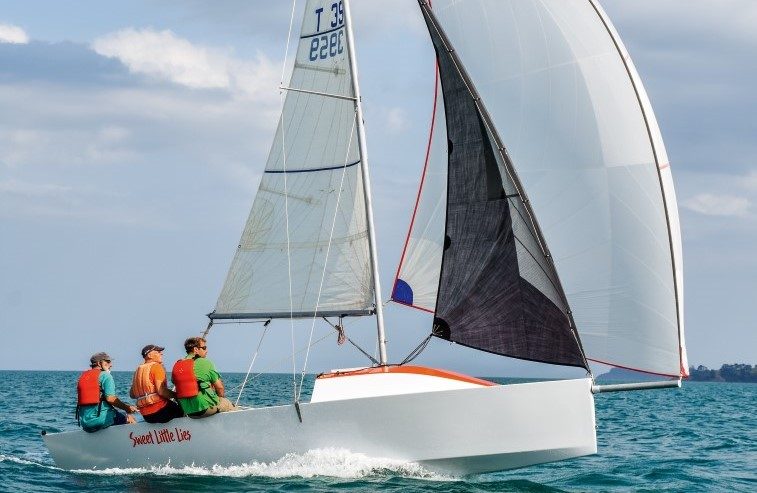 Dave, his son Dylan and I took her out for the first sail in a 10–16 knot sou’wester with a chop – typical Kawau Bay conditions. Upwind she heeled and stiffened, pointing high and tracking well with neutral helm. She banged a bit in the waves – again, not unexpected in a light boat with a flat section forward.

Bearing away the sensation was one of calm, effortless pace. She accelerated without any sense of ‘climbing’ onto the plane. She ran smoothly with a flat wake, bow and front 0.5m to 1m of hull clear of the water. The flat central plank acted like a ski. The helm weight increased on the tight reach but it was easy going, never over-loaded.

Greg’s ideas (described several decades earlier) were right here in the hull shape – she covered the miles effortlessly. The old jib and main were OK but probably did not do the hull justice.

Only a few were needed. The rig was designed to use an E5.9 rig and sails but the jib sheeting needs a modification. Dyneema rigging saves on weight aloft but the expected low stretch is not apparent as the splices and the braid creep under load. A new way of lashing or turnbuckles is needed.

The tilting, ballasted centreboard leads to a leverage/ winch issue – as well as slot hole turbulence. Dave’s made a clever board to slide in and block this up. The option for a vertical lift centreboard as well as cassette drop-style rudder could be less fiddly.

The first race – in 14–20 knots – was at the Sandspit Yacht Club two weeks later. We were up against a Seascape 24, a range of 8 –10.5m keelers and a couple of cats. We thought the Dyneema rigging would be OK after the first sail downwind, but the slack was back so the new gennaker was left in the bag. 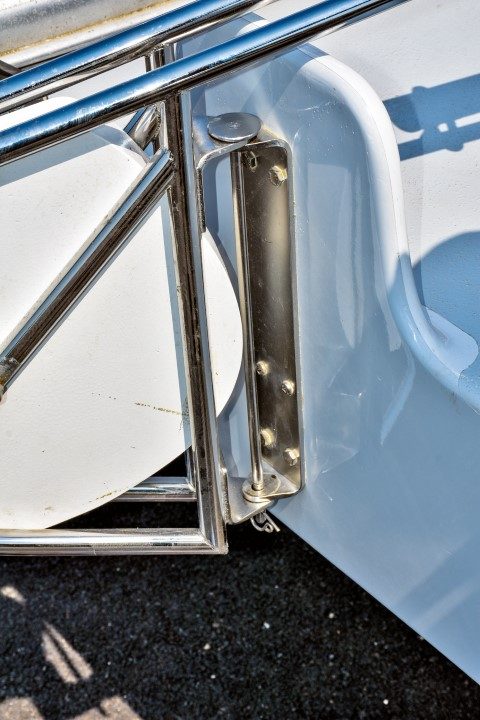 The start was off Algies with a flat run to Christian Bay, then a beat back to Algies. We sailed high to get clear air and find the VMG groove that would keep us in touch and give us a buzz as the gusts came through. The TT22 skated downwind effortlessly. The Seascape had a monster gennaker that took them direct, so we lost touch – they were 400–500m ahead at the bottom mark.

Heading closer to the Christian Bay Buoy the breeze was a solid 20-plus knots. Nothing quite like surfing into the bottom mark at 12.6 knots (according to GPS) knowing that you will be sheeting on 50% more sail than you need going upwind. As we staggered our way upwind we got to grips with how much sheet we could use to keep her on her feet.

When our pants were wet we realised we were going to windward OK, despite our gunnel being under water in the gusts. Quite a trial but the helm remained balanced as long as there was a bit of main on to stop lee helm generated by the too big jib. A smaller jib and a reef would have made life a lot easier.

We were catching the Seascape – only 100–200m behind at the first cross and we were pointing higher at the same speed. The bigger boats were well ahead, all having a comfortable sail with dry pants – but they did not have the buzz of planing downwind in waves. This reminded me of Laser sailing, with my bum hooked over the gunnel.

Seas were flatter and wind dropped a little as we approached the finish off Algies. A late split on the beat saw the Seascape gain a little back. A cold, wet but satisfying sail. We had done well in challenging conditions, even though our setup wasn’t ideal. Next time will hopefully have less wind and rigging that stays tight so we can fly the gennaker.

Later, several people approached us on the ramp to ask about the TT22’s pedigree. Greg’s design magic and Dave’s boatbuilding skills have created a yacht that feels faster and performs better than its length and simple ply construction would suggest. And she’s a delight to handle.

And that boatbuilding cloud that’s been hanging over my life? It’s diminished a little, but it’s still lurking.