While not being the sharpest knife in the box, I nevertheless have a point, writes Kevin Green.

A good knife is a mariner’s best friend I reckon. Over the decades my knives have got me out of quite a few sticky situations and the one time I went to sea without one my leg was nearly torn apart. More about those gory details later.

My knife collection has grown over the decades – not counting the ones lying at the bottom of various seas and oceans – and nowadays numbers about a half a dozen or so.

Grandad gave me my first knife, a folding wooden-handled model handed down to him from his father, my great-Grandad. Great-Grandad was a North Sea herring fisherman, chasing the summertime shoals of the ‘silver darlings’ and hand-lining for winter cod. But the wild weather eventually killed him with pneumonia in his early 40s so his five sons and two daughters were left to scratch a living on our moorland croft. 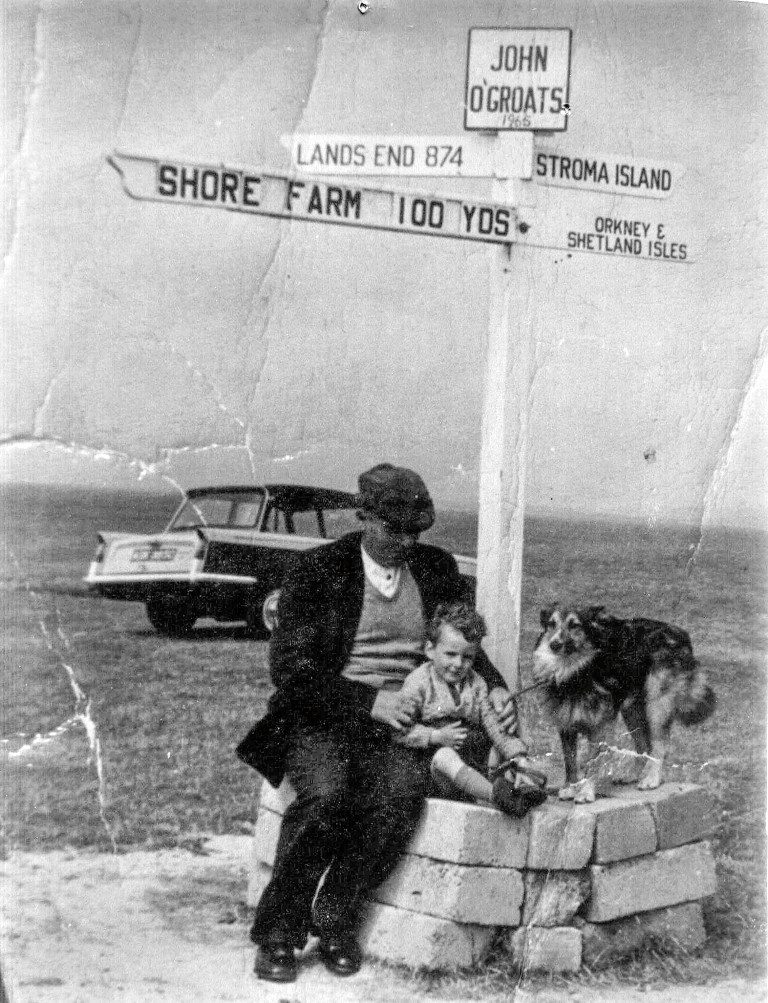 Living on a croft near the coast, they worked both the land and the sea to survive. As a crofter-fisherman, Grandad used a folding knife suitable for both jobs – cutting binder twine ashore and tying lobster claws offshore. When Grandad gave me the knife, it mostly smelt of tobacco – its other main use was cutting slivers from his Walnut Plug tobacco block and the Sheffield steel blade had thinned from decades of sharpening.

He’d even taken it with him during his Royal Navy days when serving on the big battleships HMS Royal Sovereign and the Hood. The latter was the Navy’s most powerful warship and had been built in Glasgow and for a time operated out of Scapa Flow, only six miles across the water from our croft.

“A blunt knife is not worth putting in your pocket,” he once told me while docking the tails of our lambs, as their blood seeped into its handle.

THE GAME OF KNIFEY

In our village of 80 people everyone carried a knife, and at school knifey was a popular playground game. Combatants faced one another and took turns to throw their knife into the ground beside their opponent’s feet. A throw only counted if the blade stuck in the ground – and the opponent had to move his/ her legs to that spot.

Tactics included playing to the weakest side of a left-handed player and not throwing the knife too far (so as to make sure it stuck). The playground was rocky and heather-clad so the blade often spun off the red sandstone and sometimes nicked the shins of the players. The game concluded when a player couldn’t stretch anymore and fell over or collapsed. It’s a game I’ve taught my own kids and friends’ kids over the years, sometimes to the alarm of onlooking parents.

At sea my knife was handy in the early days for tying the lobsters’ toes with string before elastic bands were introduced. Lobsters have a sharp cutting claw and blunt crushing one – both required securing before they were put in our floating kists to await the market. 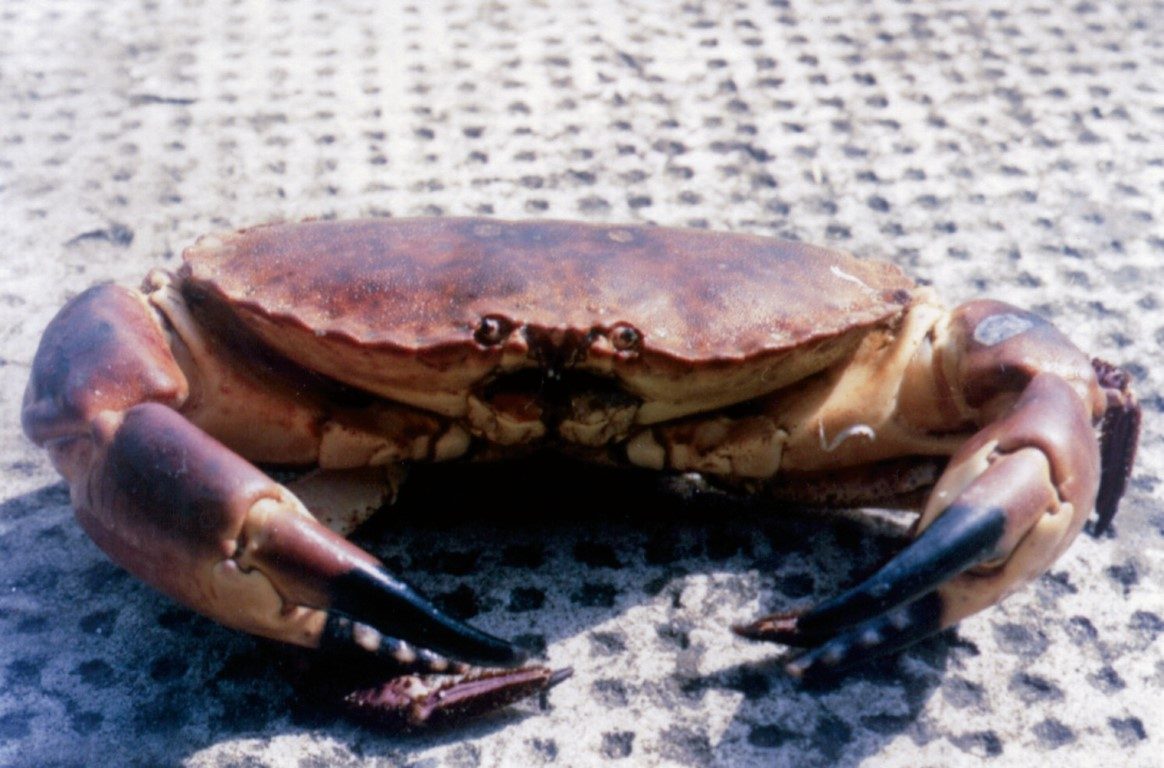 For the crabs, the larger ones would have the inside of each claw nicked by the knife to immobilise them. Aboard our fishing boat, the double-ended yole Clyno, we kept a sharpening stone in the engine room alongside a six-inch, wide-bladed sheath knife. Its soft steel blade sharpened easily and it was one of our gutting knifes.

With their two entrances our creels were meant for lobsters and crabs but often caught fish and conger or moray eels. Both were dangerous adversaries and cousin Peter, another inshore fisherman, once came into the harbour with his thumb hanging off after tangling with a conger. I’d keep well away from a trapped conger by opening the creel and letting the five-foot of angry eel slither into the bilges to cool off a wee bit before gathering the courage to cut him up into half a dozen pieces while my rubber boot held his head. 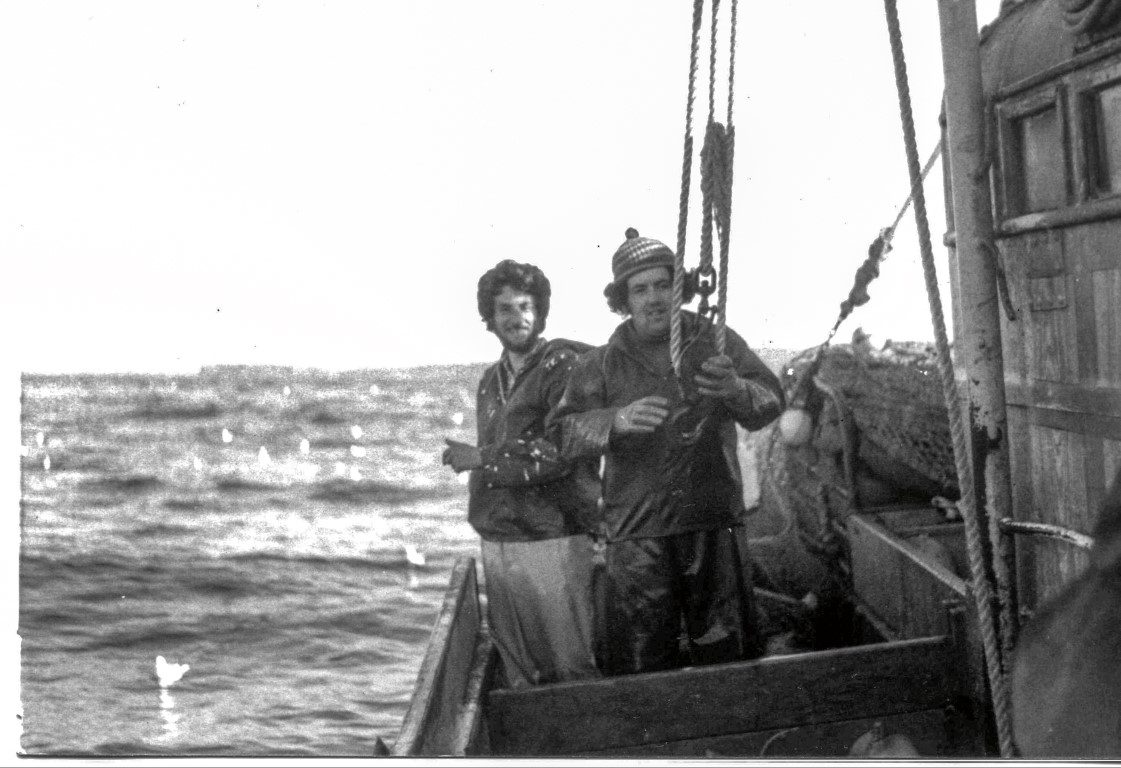 Often after baiting and moving the lobster pots we’d troll for fish – saithe, mackerel and cuddings – on the way back to the harbour. We’d use the ‘boardie’, a three- by eight-inch piece of wood that pulled our trolling flies deep until a fish struck and the boardie emerged on the surface along with the hooked fish. Hauling in a two-foot long saithe, I cut it into chunks for our bait barrel.

An old herring cask, this barrel sat in the corner of the old salmon house. Its flagstone roof supported by rotting beams became a hazardous place and I always glanced apprehensively at the ceiling as I strode in to fill the bait barrel. Opening it unleashed a rank odour of rotting, salted fish – the regular topping up always seemed to be my job.

In later years at university in Edinburgh, as one of the few active members of the sailing club, I’d take friends for voyages across the Firth of Forth to Fife. The unkempt Enterprise dinghies always required halyards fixed and lines tailed – so the old fishing knife came with me as we launched below the pylons of the Forth Road bridge to brave the fluky winds swirling around its girders.

Warships from the nearby Rosyth Dockyard sped past and occasionally the dark silhouette of a nuclear submarine. Often a ruse to invite a pretty girl offshore, it sometimes ended in tears of fear as North Sea easterlies blasted us in the open waters – occasionally my crew thought it wiser to take the train back to Edinburgh rather than another voyage beside the bearded Highlander with a twinkle in his beady eye. 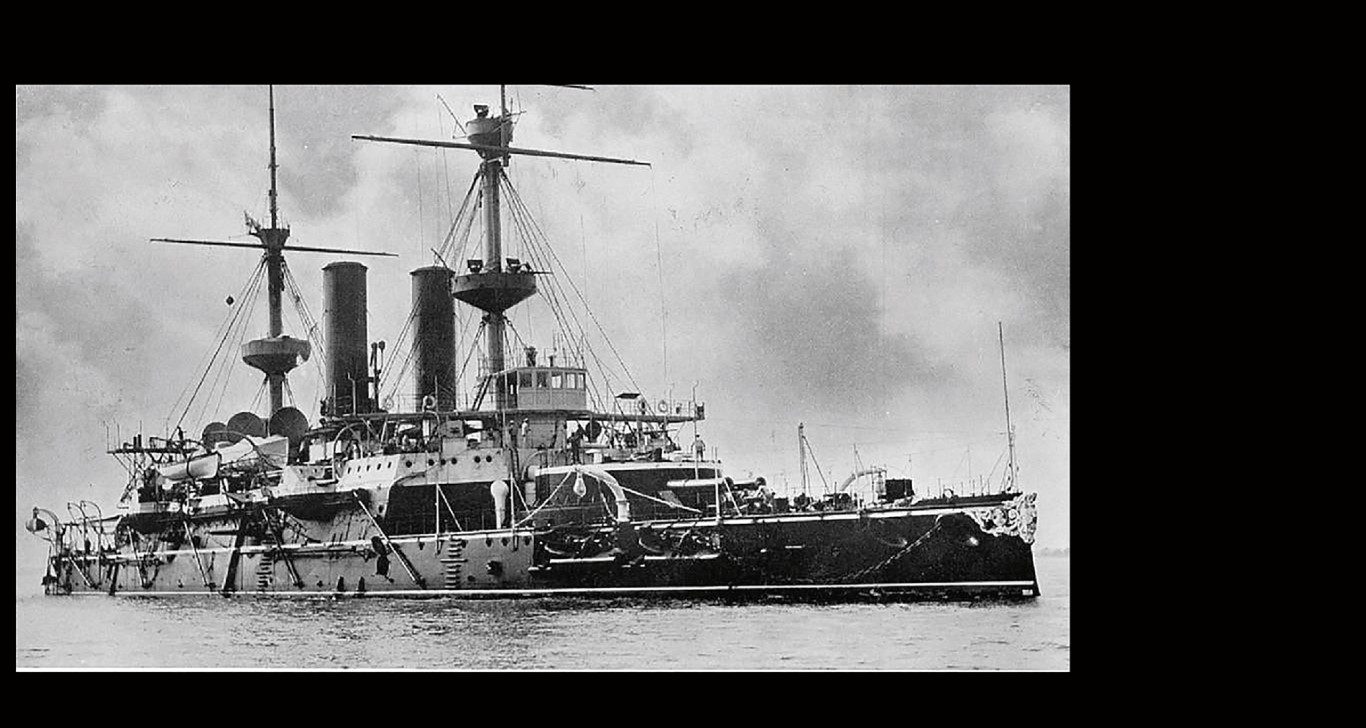 Ships fascinated me and as a devoted fan of Jacques Cousteau’s undersea TV shows I elected to train as a diver so that I could visit wrecks. One wreck in particular grabbed my imagination – one of Grandad’s ships, HMS Hood. Thankfully he’d been transferred before she fought against the Bismarck and sank.

But her predecessor – one of the mighty Dreadnought class – lay sunk off Portland in the English Channel and that’s where I found myself one day, finning along her corroded sides while thinking about Grandad. On my thigh was strapped a new knife, a lightweight stainless steel Namron. Made in Japan of 440-grade stainless, it came with me on all my wreck dives and saved my life during a night dive in the Straits of Gibraltar when I became entangled 30 fathoms down.

As my horizons widened (backpacking through Europe and more miles under my keel) a Swiss Army knife became my blade of choice. Cousteau never left home without one. Bought from a British army garrison shop in West Germany, it travelled with me as I walked and hitched the highways and shores of the Mediterranean.

Working as engineer aboard a 95-foot schooner it still came in handy and I once even repaired the owner’s SLR camera with its screwdriver. It remained in my pocket as I crossed the Atlantic and worked on yachts in the Caribbean. With a little sharpening its blade could cut a mango or scoop out the insides of a coconut, or neatly slice a baguette in Martinique. 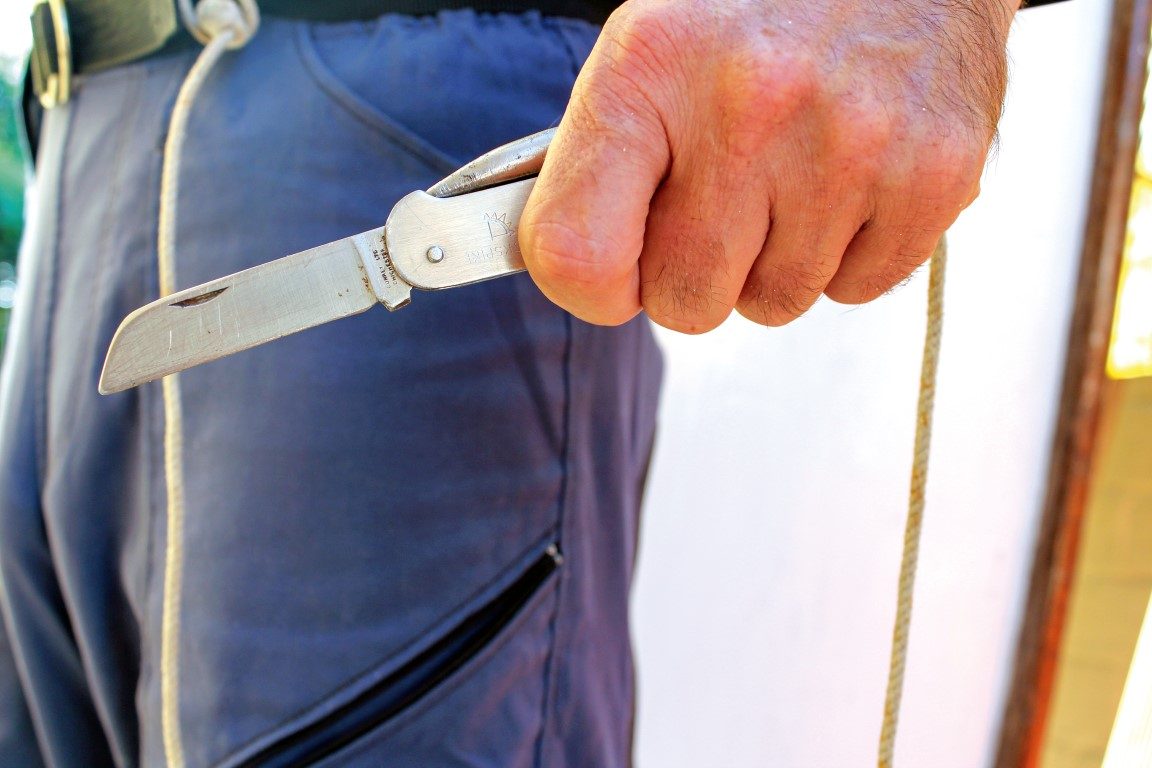 As the sea miles grew I opted to try for my Yachtmaster certification. Training was at one of the great homes of yachting, the Solent. Its famed chandlers have been supplying gear to mariners since before Nelson, so it was a good place to search for my next knife, a Sowester Lockspike Master from Curry Ltd in Chichester.

A simple and lightweight knife with a four-inch snub-end blade and a sturdy marlin spike, it came with me during my Yachtmaster exam. The examiner, a formidable British Naval Commander, came aboard in Gibraltar and commanded me for a day as we sailed, manoeuvred and navigated between North African and European waters.

After living on the shores of the Mediterranean and sailing down North Africa’s famed Barbary Coast, my wife and I planned emigration to Australia. Before leaving, father-in-law Jimmy gave me what would become one of my most treasured knives – a Leatherman.

Jimmy, like his father before him, was a trained boatbuilder in the Scottish Highlands and had gone on to become a carpenter. He knew the value of a good tool like the Leatherman. The knife travelled with us as we circumnavigated Australia by campervan. That trip allowed us to charter a yacht in the Whitsundays, a poorly-maintained vessel with a defective roller-reefing mainsail that jammed in the Whitsunday Channel in a gale. The Leatherman averted a possible catastrophe. 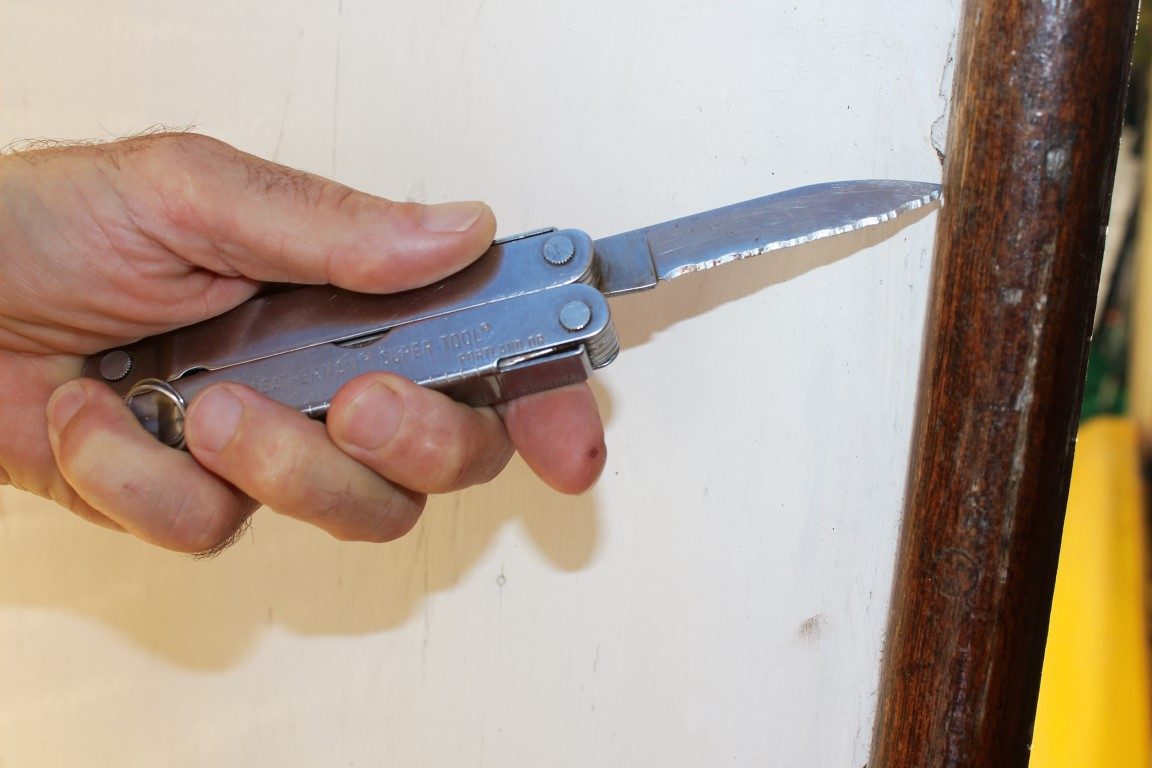 In Sydney for my first Hobart race, I was given a new, lightweight Leatherman, the Skeletool. Its compactness hides a sturdy snub blade and it has a handy slot for turning stiff shackles. But what I remember most clearly of that race is wrestling with the shattered end of the spinnaker pole on the foredeck, using the Skeletool pliers to trim the jagged metal.

THE TIME I WENT TO SEA WITHOUT A KNIFE?

Well, that was on Botany Bay where a bunch of us were windsurfing. I was taught to always carry a knife but on this occasion I’d forgotten. So when a trolling fishing boat steamed right through our fleet without any care for the consequences, I was literally caught out.

The square-sterned fishing boat suddenly appeared in the corner of my eye as I skimmed over the waves. Suddenly there came a hissing sound as the fishing boat’s trolling lines caught my windsurfer, but much worse was to follow.

The thick nylon lines tightened as the fishing boat carried on trolling through the angry windsurfers. A louder hiss grew and then a mighty thud hit me behind my left knee. This was the triple-barbed hook embedding itself in the muscle. 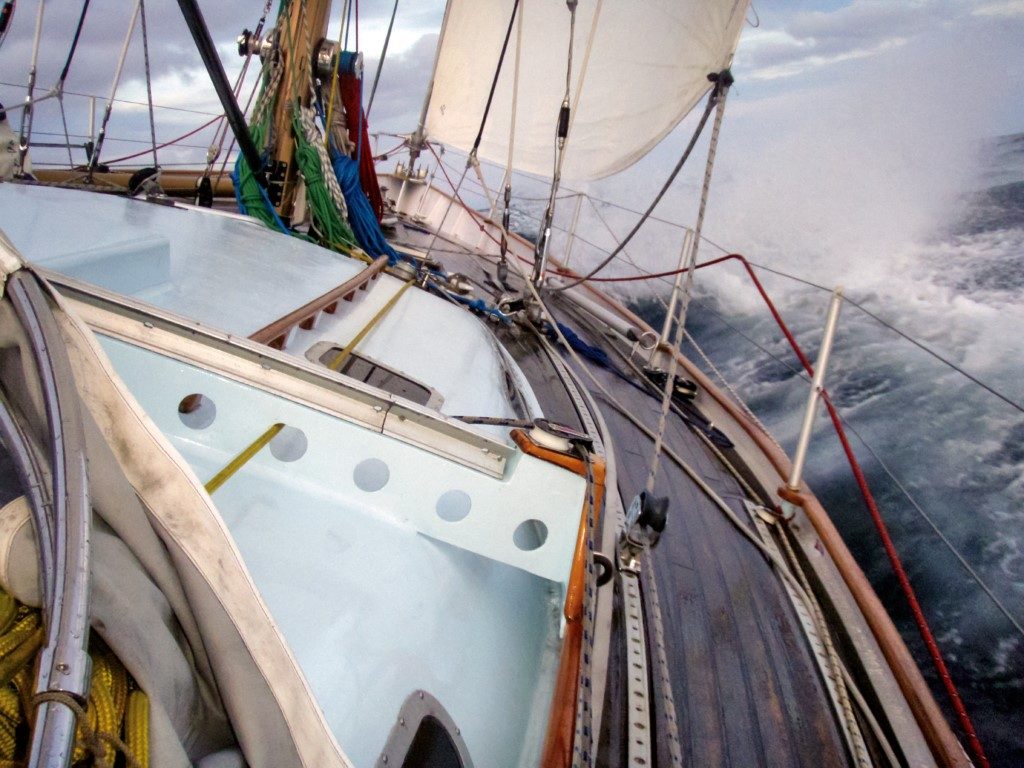 I writhed in agony as the sea went red but my horror grew as I realised the line was speeding out with the trolling boat. I cursed my lack of knife and cursed the fisherman, who I may have used it on, before realising that only a few seconds remained before the slack was taken up.

Realising that my only cutting blade was my teeth, I sprang into the water and gnawed like a beaver that’s imbibed too much Red Bull. As the last foot of slack was taken up, the gnawed nylon parted to leave the spinner and hooks in my leg.

That was the last time I ever put to sea without a knife.