TAKING A PADDLE IN THE WORLD OF WAKA AMA
Paddling waka ama is boating at its most basic. But maybe the most physically beneficial, satisfying and fun too.

Sitting waist-deep in a thin fibreglass shell that leaps through the water with each pull of the paddles is a pleasant physical workout performed in the open air (and sitting down – which is appealing). But getting the best out of a waka ama takes consummate teamwork and skill.

The paddlers shrugging into lifejackets and picking hoe from the wall rack at the Taranaki Outrigger Canoe Club banter freely and laugh often.

The teams at the club are multicultural: American, Danish, Scottish and Tahitian but the greetings are in te reo Maori. A karakia is shared before the waka goes to sea and, says paddler Rui Leitao, “we have a karakia if things aren’t going well, too. It’s great…perks everybody up.” 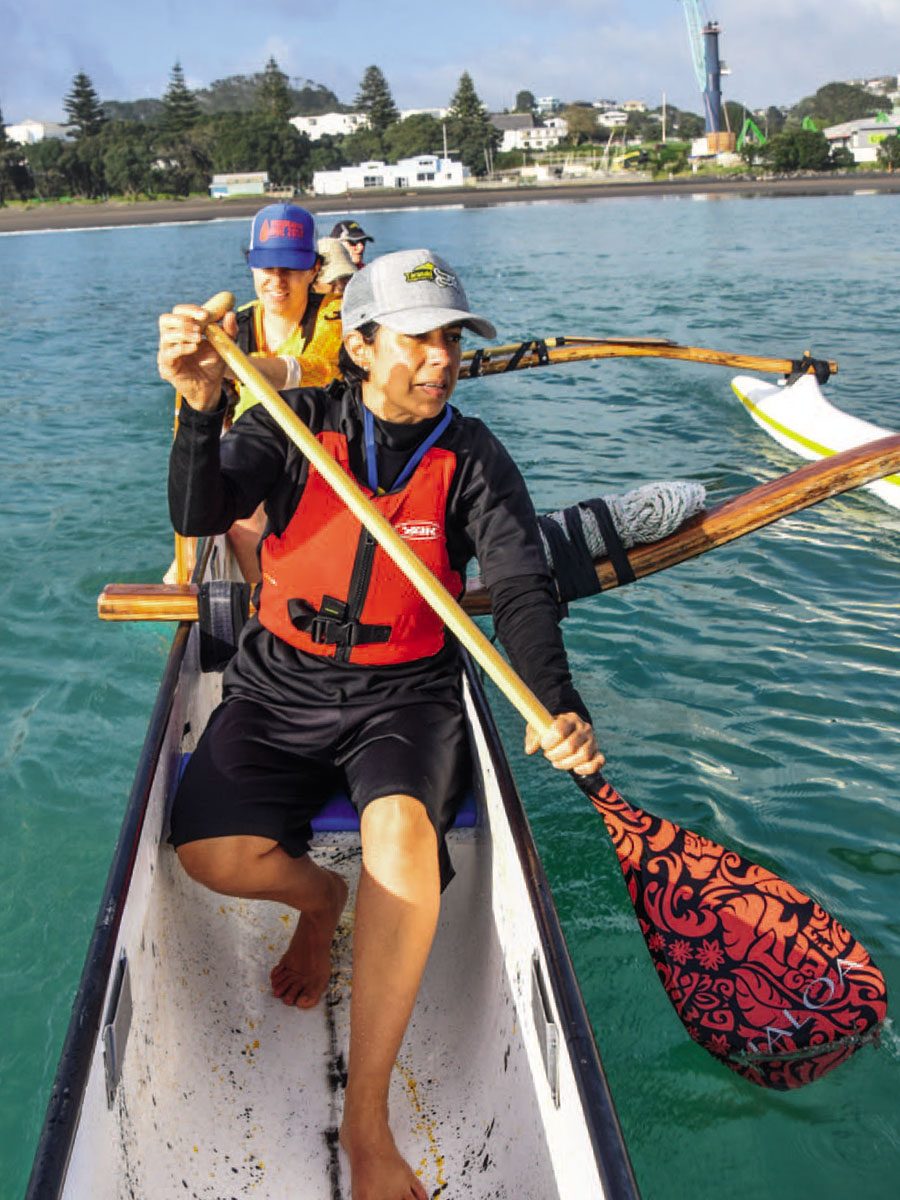 New hoe – or waka – are blessed by a kaumatua.

But after that, it’s up to the crew. “I’d better be careful how I say this,” he grinned, “but we try to have the heaviest two people in the middle of the waka. The front paddler is responsible for timing and rhythm, the number two paddle keeps the rhythm going – everybody watches him or her to match themselves.”

“The next three paddlers are all about power – keeping the waka moving – and keeping an eye on stability; moving body weight to keep the boat on an even keel.”

The steerer in the back seat of the waka has a longer hoe (paddle) than the others – they’re normally an experienced paddler who keeps an eye on the others, and the waka itself, and acts accordingly to keep it going in a straight line while expending minimum energy.”

The main hull, called the waka, has two arms, or kiato, and the ama is the small outrigger hull at the end of them.

To comply with Nga kaihoe o Aotearoa (Waka ama NZ) competition rules, the W6 (six-person) boats are around 15m long, built from fibreglass and weigh about 150kg. The ama is adjustable and can be extended out to 2.3m for extra stability in rough seas.

“It’s amazing – an extra 10kg feels like having another person on board.”

There are also lightweight carbon fibre boats which weigh just over half as much as the standard fibreglass versions.

Waka ama, as we know them today, sprung from the outrigger canoes (vaka) of Polynesian tupuna (ancestors) and varieties are in use throughout Oceania. 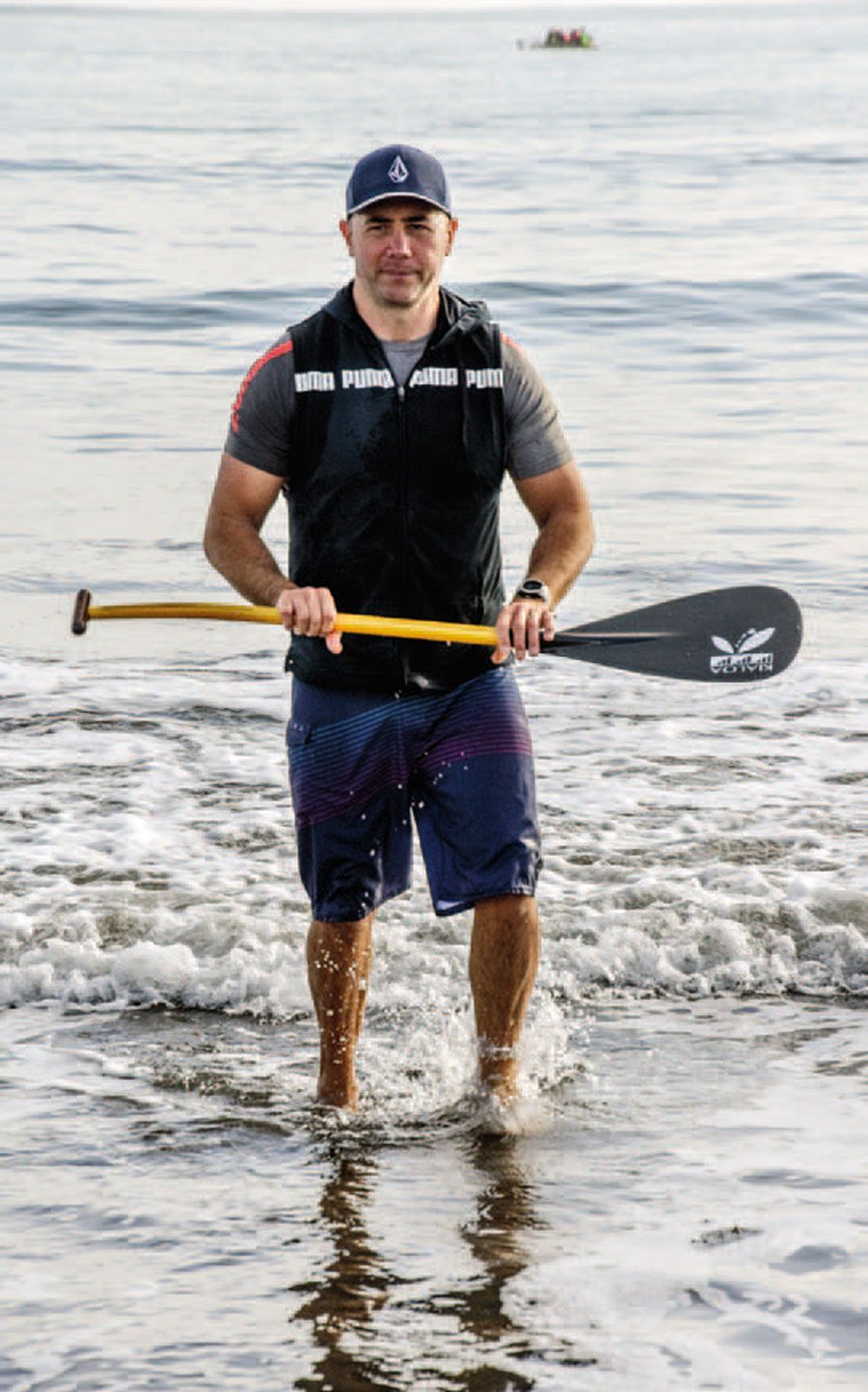 “The sport is just burgeoning all over the Pacific and elsewhere,” Leitao said.

December–January is the sprint season in Taranaki and Rui says that the boats can maintain 16km/h over a straight 500m course.

But it’s the distance sprints where the paddles really move the water. The course is over 1.5km in 500m sections with a right-angle turn at the end of every 500m. “Everyone has a job – it takes great coordination.” The front paddlers move the boat in one direction and the rear paddlers in the other to pivot a waka almost in its own length at speed. Wind and tide have to be accounted for to avoid unwanted penalties.

“After you’ve done that a few times… there’s just no oxygen left in you.”

Long distance races are paddled over 26km and the teams do 10–20km paddles four times a week in training.

“It’s amazing, though – at the nationals in Raglan we paddled 30km and at the end there were five boats sprinting hard out for the finish.”

Two W6 (six paddlers) can be fastened together to make a 12-person waka, which are also raced. 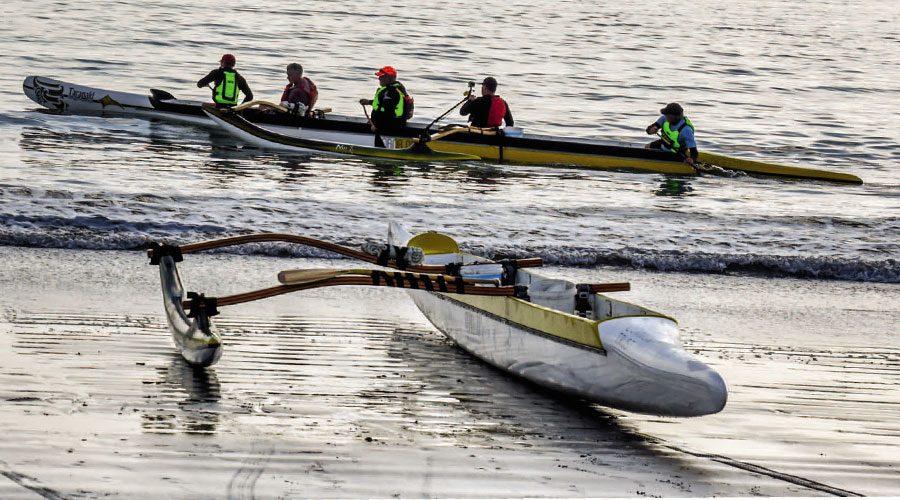 Waka ama launching off the beach

Paddling a waka ama properly isn’t just a matter of pulling on the hoe, he says. “There’s a body twisting motion to get the most out of each stroke. The proper technique is push the hoe with your top hand, while you keep your body and the hoe straight and push with your leg. It’s very good for your shoulders – and your core muscles. But there’s a lot to think about – you sort of focus on getting one thing right, then another.”

Solidly-built and with the affability that seems to affect most paddlers, Leitao has been paddling waka for three years but has a background in rowing – standard rowing and sweep – but says he likes the whanauorientated world of waka ama. “On whanau days we get the kids out. The hoe are longer than they are – and the lifejackets completely envelope them. It’s very social… they learn about teamwork, boating safety and te moana.”

“But I like the tikanga too – the whenuatanga, or earthbound nature of the sport. You can compete at the nationals right up until the golden masters for people 60- plus years old – and plenty do.”

The Taranaki club waka ama range up and down the coastline and cope with the frequently challenging open Tasman Sea weather conditions. They carry kayak-style skirts to stop water flooding the waka. “It’s very safety orientated – we have drills so everybody knows what to do if we tip over. The waka have buoyancy in the ends, so they don’t completely sink, and we carry buckets to bail them out.

“We can paddle through the islands off New Plymouth and look at the seals or have dolphins playing around us. Or go through Shark Alley between two islands. One time a lady from Marlborough was walking on the beach and asked us about the boats. “We said, ‘jump in – we’ll take you for a paddle!’ She was completely blown away by the nature out there.

“You get to be very aware of the conditions – we can feel the water around the waka get colder when we pass the rivers coming off the mountain – and watch the clouds and sky to see what the weather is doing.