After seven years of painstaking, restorative labour, the 1898 cutter Kate is back sailing on the Hauraki Gulf, rescued from almost certain death by a dedicated team of Waiheke Island shipwrights.

They were the builders’ utes and courier vans of the Hauraki Gulf. In the late 1800s and early 1900s, sailing cutters delivered anything they could to communities scattered around the shores of the Gulf, and on the islands within it. And returned with mail and farm products.
In those days, the water was the road to these communities, and quicker and more reliable than transport across the land. The hard-working cutters soon found themselves out-paced by pocket steamers – and these took over regular routes carrying passengers or time-sensitive cargo, like milk. But for more than 50 years, the cutters were everyman’s transport option. 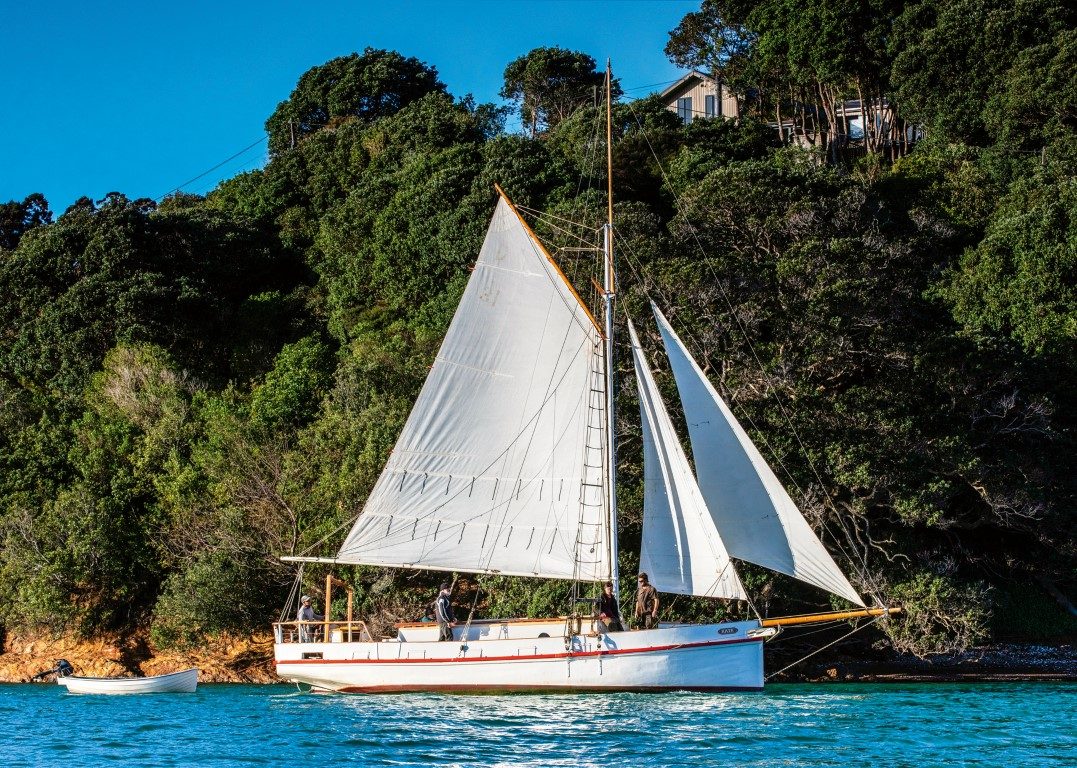 And then, like much related to the age of sail, they faded away. Into memories, museums, paintings and romantic books. The advent of diesel engines was their death knell. Still, some adapted to the changes.
The oldest two sailing cutters in New Zealand – Rewa and Kate – today find themselves in very different circumstances. Built in 1886 in Kirita Bay, just south of Te Kouma on the Coromandel, Rewa is now an exhibit at Auckland’s Maritime Museum. There used to be a ‘notional’ jetty leading to her, where visitors could step aboard, but no longer. 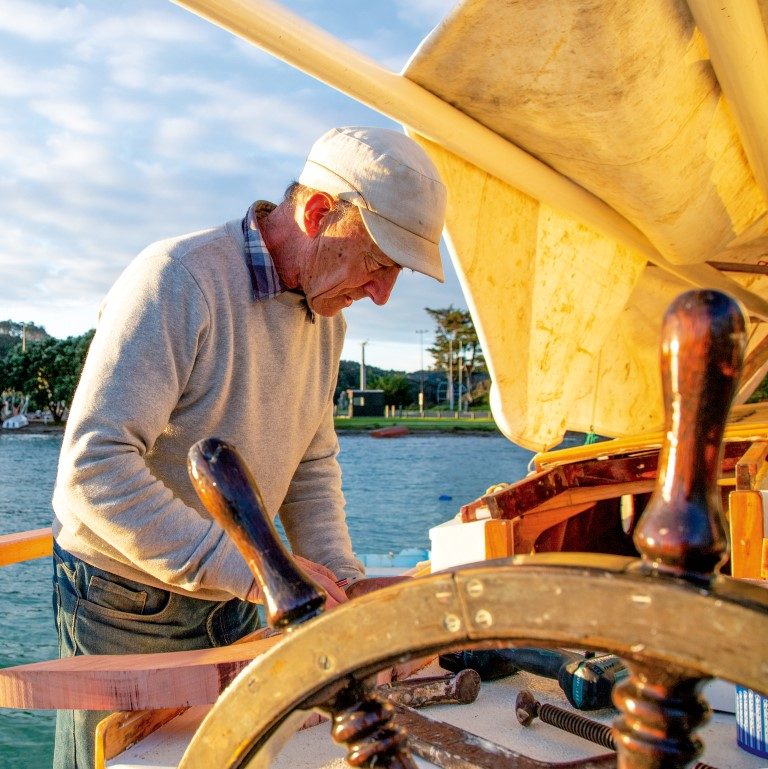 Kate was built in 1898 at Kaipara and, by contrast, is out on the water again, brought back to sailing trim after a seven-year restoration project orchestrated by boatbuilder and designer Bernard Rhodes on Waiheke Island. And the results are pleasing – for an old dame Kate is surprisingly nimble and manoeuvrable.
For a lifetime, it seems, she had been beached among the houseboats at Waiheke’s Okahuiti Inlet, in Pūtiki Bay. She’d had a number of owners who didn’t always have the resources or time to restore her.
Kate’s last voyage, under power, was to her resting place at Okahuiti. Previous owners Thomas and Sharonagh Montrose began a major re-build. Her decks were replaced, a new cabin built and the keel deepened by 8 inches using kwila hardwood and bronze bolts (boating old-timers always use Imperial measurements).
Sharonagh received news one night that the boat’s lovely old brass-rimmed portholes had been stolen. It seemed inevitable that the boat faced her future as a derelict. It was, for Sharonagh, the end. She sold Kate.
When Bernard acquired Kate he planned to get her sailing again – a dream culminating with her being used as a sail-training vessel for young people. And he’s almost there.
Kate is the flagship of the Waiheke Working Sail Trust, whose goal is “to establish a sail training, ship building and youth development organisation on Waiheke, teaching and developing traditional skills in boatbuilding and seamanship as well as preserving our sailing heritage.”

Says Bernard: “When the Trust found her she was on the brink of ruin, teetering between life and death. But she was soundly built, planked in kauri on grown pohutukawa frames. Her fine lines shone through more than a century of hard work and mistreatment.”
Working on the restoration with Bernard were two local lads – Tom and Joe Foster-Christie – who completed a boatbuilding apprenticeship over the project’s duration. One with heritage knowledge thrown in. “I taught them to caulk the seams and fit graving pieces in the planking,” Bernard recalls. These are skills most modern boatbuilders have forgotten.
Other locals volunteered in whichever way they could – a logo, a website, cash being raised. Kate, Bernard and the boys became a fixture of local living history, with everyone noting new developments as they drove past Kate’s mud-mooring. The haul-out. The stern restored to its original lines. The new forefoot and planking. The caulking. The paint job. The re-launch. The mast. Then the top mast. Getting nearer all the time to sailing again.
We know that Kate had a reputation as a fast sailer and had won many races at Dargaville. In 1911 an engine was fitted and she made herself useful towing kauri logs out to sailing ships for export. Later she was a fishing boat and then became a yacht – and was heading to end her days as a houseboat on Waiheke Island. All of this mostly comes from oral history – as the Trust’s website archly remarks, “records were lost the last time she sank.” 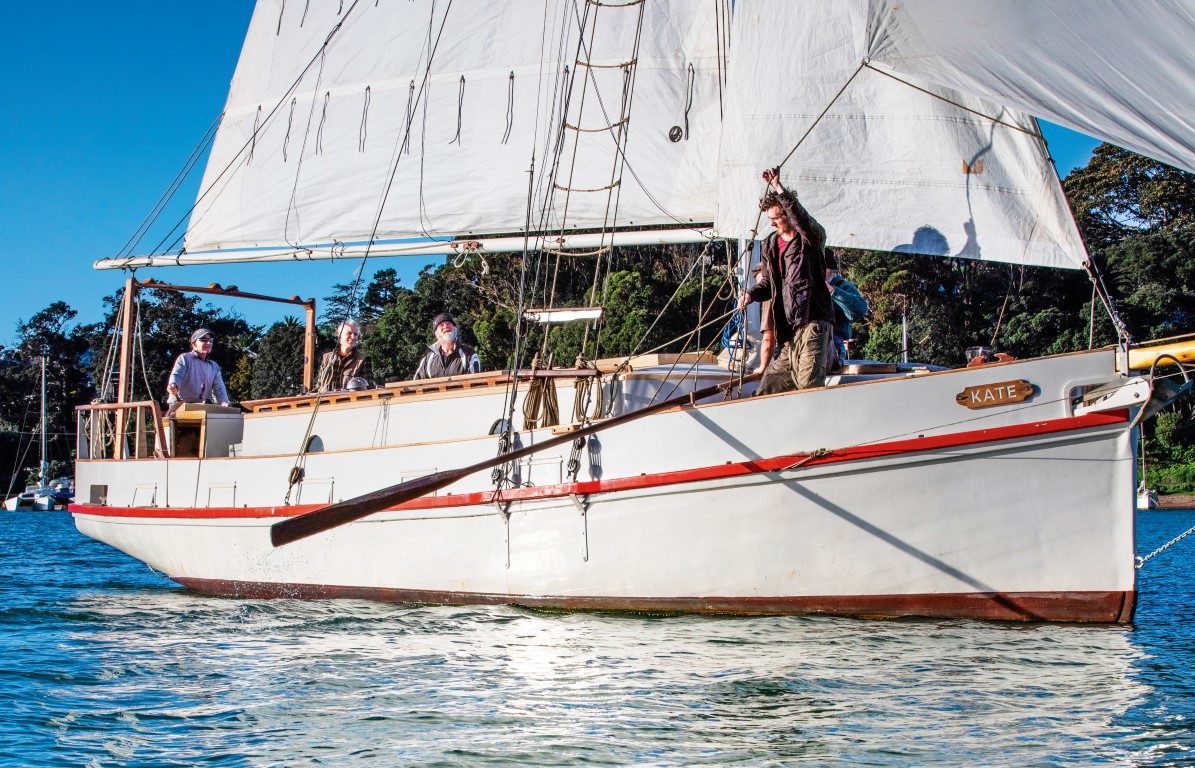 As for physical remnants of Kate’s history, they are few. Bernard has found the original builder’s cast bronze nameplate. ‘E. Thompson & Son, builders, Kaipara, NZ.’ The stolen portholes have never been recovered.
But the oral history replaces those documents with the charm of old voices. We learn, for example, that Bill used to chant to the rhythm of Kate’s slow-revving engine: “One penny, two pennies, three pennies, four; You benzine-drinking monster, always asking more!”
Other stories: Peter Lindegreen, a retired fisherman who lives on his boat in Ostend remembers crewing on her as a boy when she was a net fishing boat on the Kaipara in the ‘50s. “Kate was trucked over to the Waitemata sometime around 1960 and was used as a crayfishing boat during the boom time of the late ‘60s.”
All this – and more – is lovingly recounted on the Trust’s website.
For those with a technical bent, the Trust’s website contains detailed notes by Bernard of the methods used in Kate’s restoration, their sequence and rationale. A recurring theme in the account of Kate’s restoration, however, is the need for funding.
But on a crisp winter’s day in early July, when the world was emerging from Covid-lockdown, Kate was actually under sail, criss-crossing Pūtiki Bay – and for a moment in time the challenges faded, replaced by a deep-seated joy.
I was steering a dinghy, trying to position it for my wife Lesley’s photography. Another local volunteer piloted a drone from the shore, for aerial footage. She proved surprisingly quick in the light 5-10-knot sou’westerly. She’s a gem.
Previously, in a yarn about the cutters, Waiheke sailor David Waters had told me how efficient they were. He said they were “hugely powerful” – as befitted their purpose as workhorses. They were also quite tender in an unloaded state, meaning they would heel over quickly under press of sail. For this reason Bernard has fitted Kate with additional internal ballast.

David also enlightened me of other handling issues about the cutters. Yes, they were manoeuvrable, they had to be; but there were also special techniques to add to this. Bernard has equipped Kate with long sweep oars, just like they used to have, to help her turn in light airs, in close quarters.
The sails of old, made from natural, fibre materials, were a kind of safety valve – they would burst and blow out before the ship capsized. With Kate’s new-era sails, Bernard and his mates have some practice ahead of them.
Our roads are humming again on the island, post-Covid. The builders utes and courier vans are back at work. And Bernard and his mates have got Kate sailing again on the Gulf.