Boat owners keen to base their vessels in the Marlborough Sounds will soon have access to a new, fully-spec’d facility following a major, multi-million dollar extension of the Waikawa Marina.

Some 10 years in planning, the new Waikawa NorthWest Marina is nearing completion and will create 251 additional berths just north of the existing Waikawa Marina. Catering for vessels between 12 and 30m LOA, the marina will also include a number of purpose-built berths for multihulls. The first berths are scheduled to become available this summer, with the marina completed by mid-2022.

The project – Port Marlborough’s largest capital development to date – will relieve much of the pressure on the existing marinas at Picton, Waikawa and Havelock. Picton and Waikawa have both been at near capacity for a number of years – so the new facility will be particularly appealing to visiting boaties wishing to explore the Sounds.

Port Marlborough estimates around half of the new berths will be occupied by non-Marlborough residents. Based on that assumption the expansion is expected to inject around $1.7million (120 berths x $14,285) of additional annual expenditure to the local economy. It is also expected to generate associated increases in employment and household income for the region.

One of the new marina’s stand-out features is its breakwater – a design relatively unknown in New Zealand but used successfully in Australian marinas with similar depth and marine environments. The location’s natural depth forced the Port’s engineers to abandon the traditional rockwall design and opt for a fixed-panel breakwater. This sustainable design allows for a continuous tidal flow of the water beneath the panels – ensuring a healthy marine eco-system – while protecting moored vessels from the elements. The design evolved from months of research which included computer- generated and scale wave-attenuation models to simulate the Waikawa Bay environment.

As an added bonus, the breakwater’s design incorporates a public walkway along the top of the structure – and having arrived at the end strollers will be rewarded with spectacular views over the Queen Charlotte Sound.

Berth holders at the new marina will also be eligible to enjoy the facilities of the nearby Waikawa Boating Club, an integral part of the Marlborough Sounds sailing and boating community. The Club is an affiliate member of Clubs of New Zealand and Yachting New Zealand, and its position in the marina provides an ideal gateway to the cruising grounds. Club members enjoy shared use of over 100 moorings dotted around the Sounds’ best anchorages. 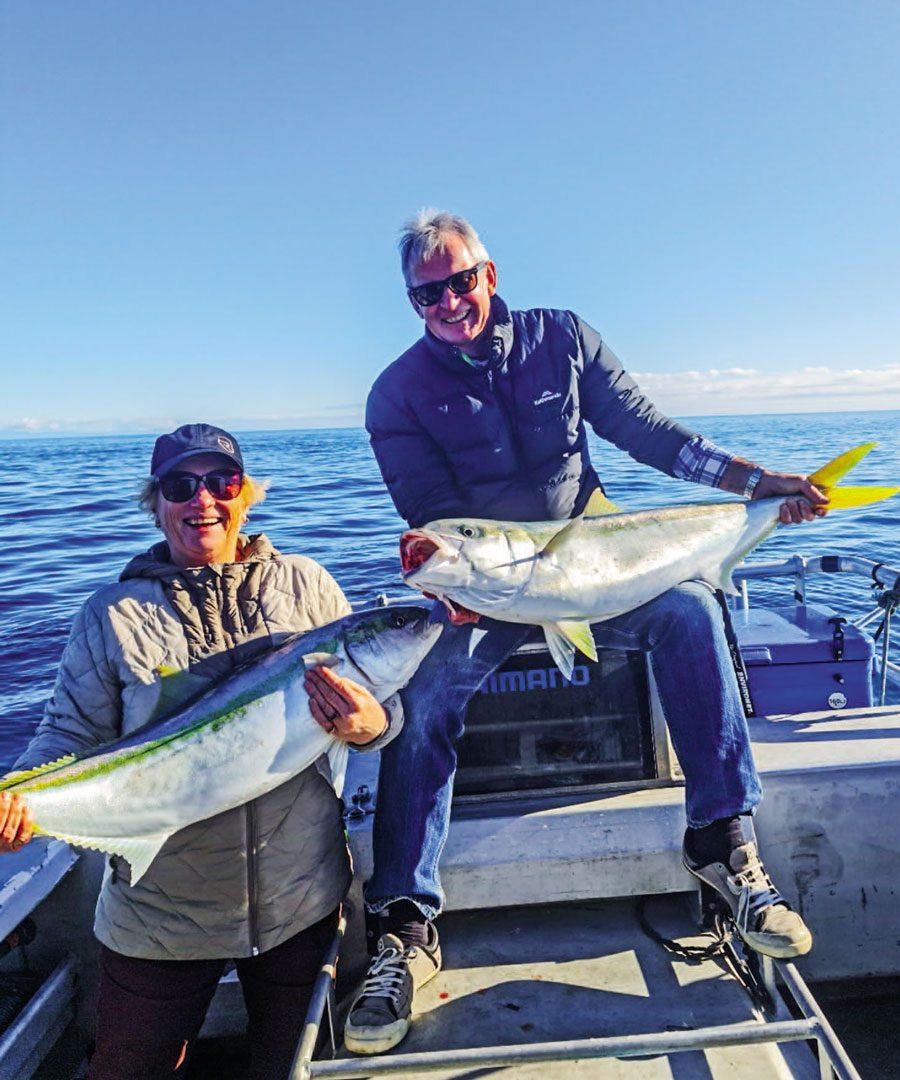 The new marina is likely to be a drawcard for visiting boaties – providing a convenient base for exploring the Sounds’ natural beauty and its myriad land-based attractions.

These include the well-documented wine-tasting programmes, cycling tours (around the vineyards) and the vintage aircraft/car collections near Blenheim – all supported by numerous art galleries, museums and restaurants.

The Sounds also provide a unique ‘social boating’ experience with numerous waterside lodges with tie-up facilities and moorings for visiting boaties. From the famous Furneaux Lodge with its pool table and BBQ/bar hospitality, through to Punga Cove’s Boatshed Bar and Cafe, the Lochmara Lodge wildlife sanctuary and the award-winning, five-star restaurant and accommodation at the Bay of Many Coves Resort, there’s something for every boatie’s palate and budget. 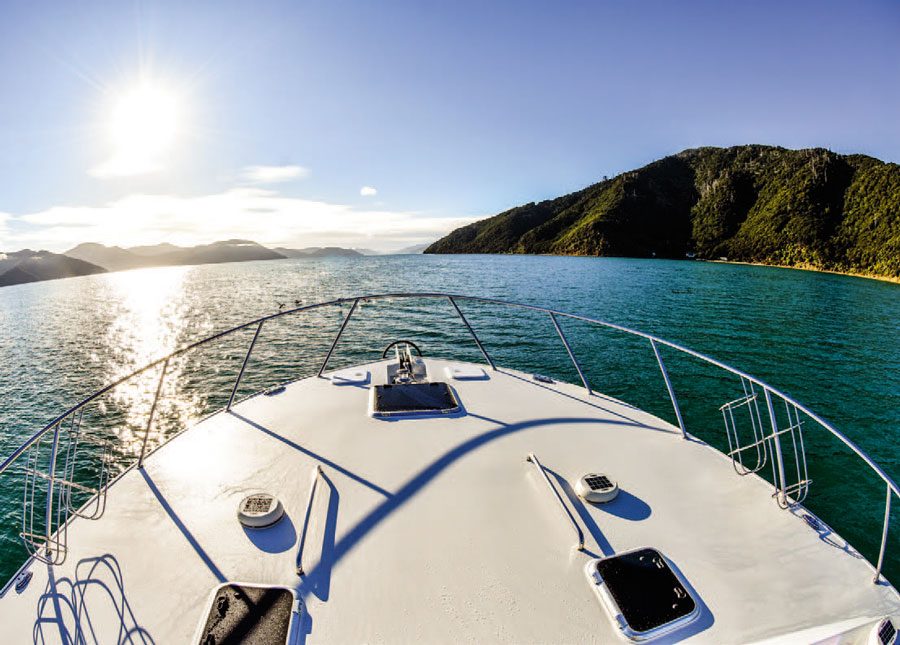 For many, the Sounds are synonymous with sensational seafood and – as every angler knows – fish you’ve caught yourself always taste better, even when the chef’s abilities are mediocre.

For me as a visitor, the best way to experience fishing in the Sounds is to hop aboard a fast, fully-kitted fishing boat with someone who knows the area. This allows you to cover a vast geographic area relatively quickly and visit remote but lucrative spots. A decent catch is guaranteed.

I opted for this strategy by joining Sounds Reel – a 9m charter boat operated by Havelock company Local Knowledge – for a day excursion. And the name says it all: skipper Ryan Phillips has operated in the Sounds for more than 20 years – as a hunting and fishing guide – and knows the area intimately. He knows where to find fish. 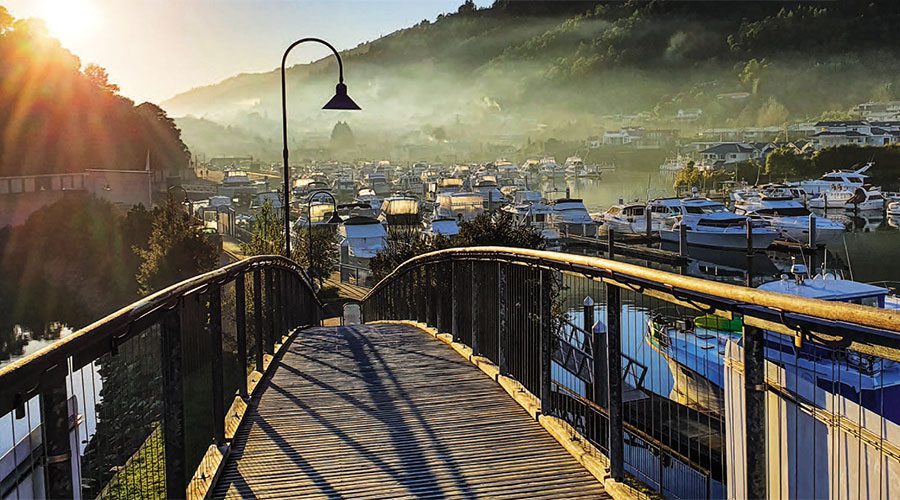 He’s also a fount of information about the history of the region, its ecology and geology and its fauna and flora. A colourful, running commentary about orca, whales, stingrays and birds – peppered with lively anecdotes – and fascinating insights into the seafood industries dotted around the Sounds.

I knew that the Sounds are home to the world’s largest green-lipped mussel industry but was only dimly aware that they also support an extensive salmon-farming industry. Our fishing activities were punctuated by up-close visits to both operations.

It was particularly interesting chatting to one of the divers tending the salmon farms. His job involves repairing the nets (daily) that form the perimeter of the farms. It seems thousands of fat salmon swimming nonchalantly inside the nets are irresistible to the local shark and seal populations. Sharp teeth cause quite a bit of damage. 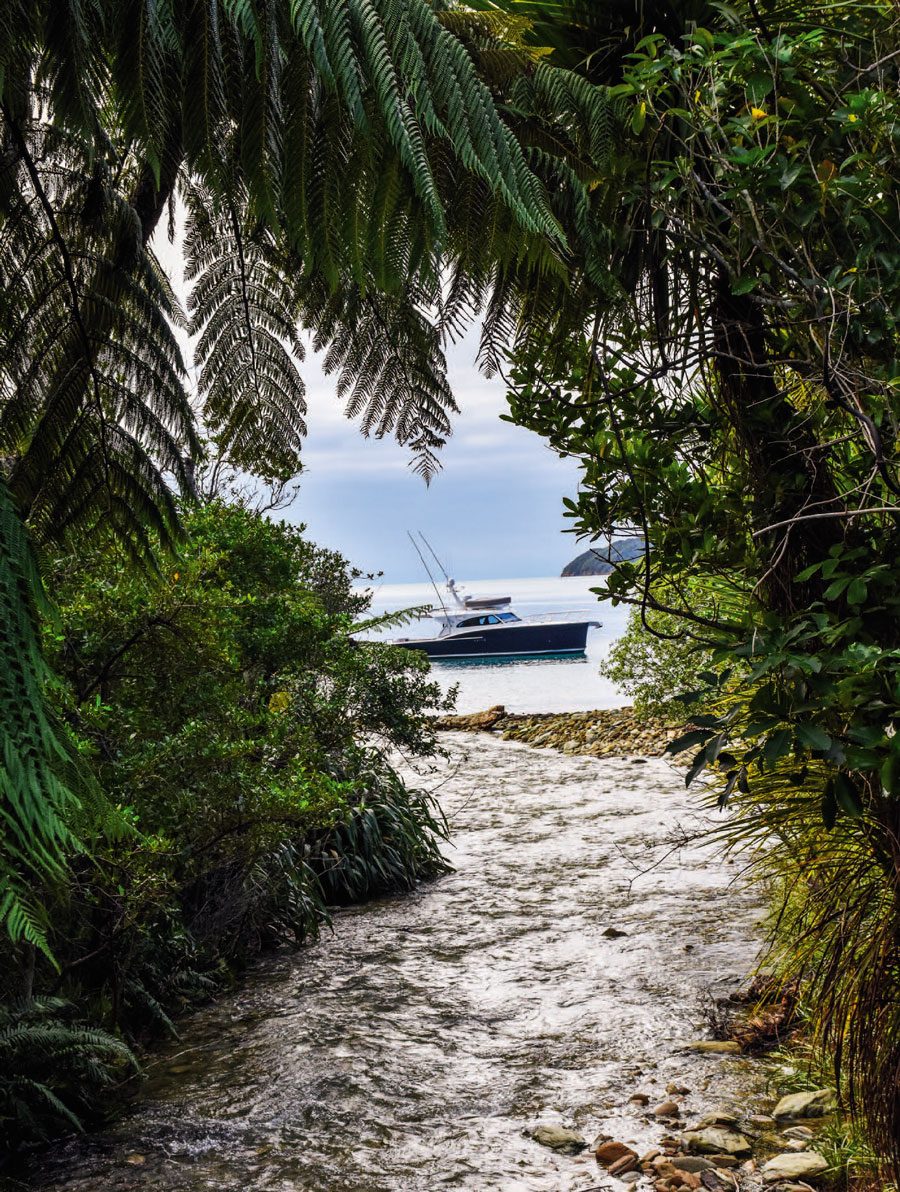 A major advantage of joining a boat with a local skipper is being taken to ‘hot’ fishing spots – with their carefully-guarded coordinates.

I’d never caught a kingie before (in fact, I’ve caught relatively few fish in my life and am often abused as a fishing charter ‘jinx’…). ‘Kingie Junction’, Phillips told me conspiratorially, was one of the best places for duelling with these fighters – and it lay near the northern end of D’Urville Island. Getting there meant transiting the infamous French Pass – fortunately for us very docile as we caught it at slack tide.

True to Phillips’ promise the Junction delivered the goods. We landed five in quick succession – kept two and returned three to fight another day. I now appreciate the kingie’s fearsome reputation – I was absolutely knackered – even though at around 12kg our fish were all average. I can’t imagine trying to boat a 40kg monster. 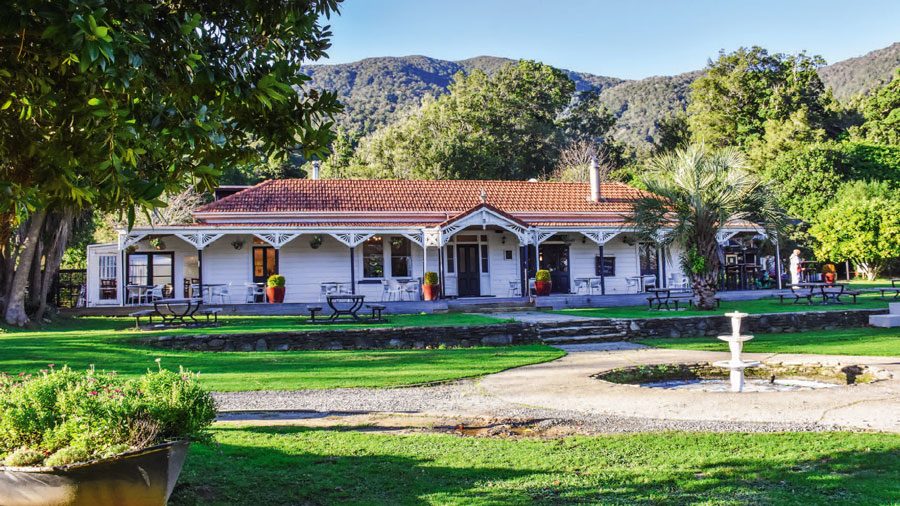 Charming spots to visit on a Sounds adventure include Furneaux Lodge

the French chef’s ceviche creation at the Bay of Many Coves Resort. A true treat!

A successful and memorable day (and the hex has been neutered), but something even better arrived at dinner that night. Phillips surreptitiously delivered my kingie to the kitchen at the Bay of Many Coves Resort in the Queen Charlotte Sound where we were staying. There the obliging French chef turned it into an exquisite ceviche. Tres Bon!

Returning from the top to D’Urville Island (heading back to Havelock down the eastern side of the island) required us to negotiate the aptly-named Hell’s Gate – the passage between D’Urville and Stephens Island.

Unlike the benign French Pass, Hell’s Gate lived up to its name, the wind against tide creating a churning cauldron of white caps and whirling eddies. Sounds Reel – with her 310hp Yanmar – powered through it purposefully and we were soon back at our comfortable 25-knot cruising speed. 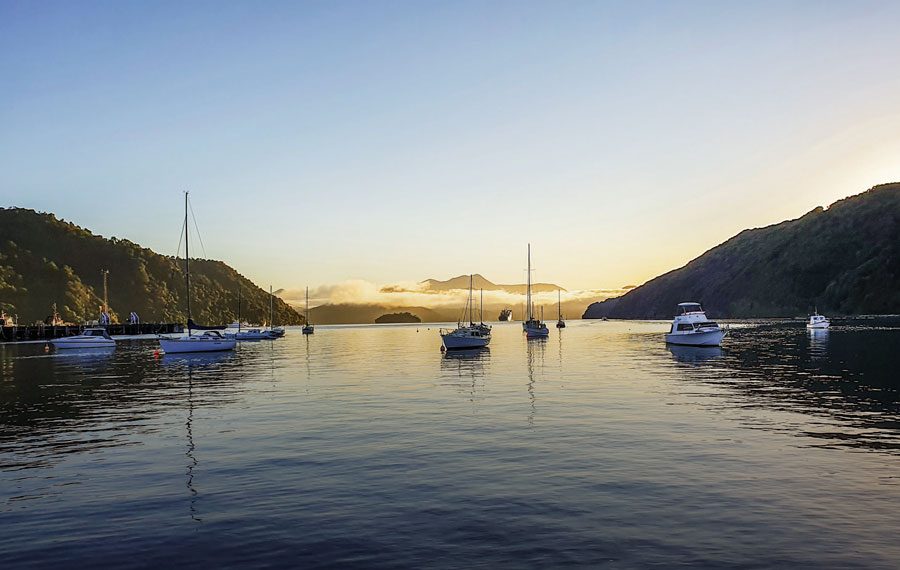 Majestic views, and plenty of places to explore.

The Waikawa NorthWest Marina is not the only sign of a region flexing its economic muscle – Port Marlborough’s redevelopment of its Cook Strait ferry terminal is another.

The terminal upgrade has been triggered by KiwiRail commissioning two new Interislander ferries to replace its existing vessels. 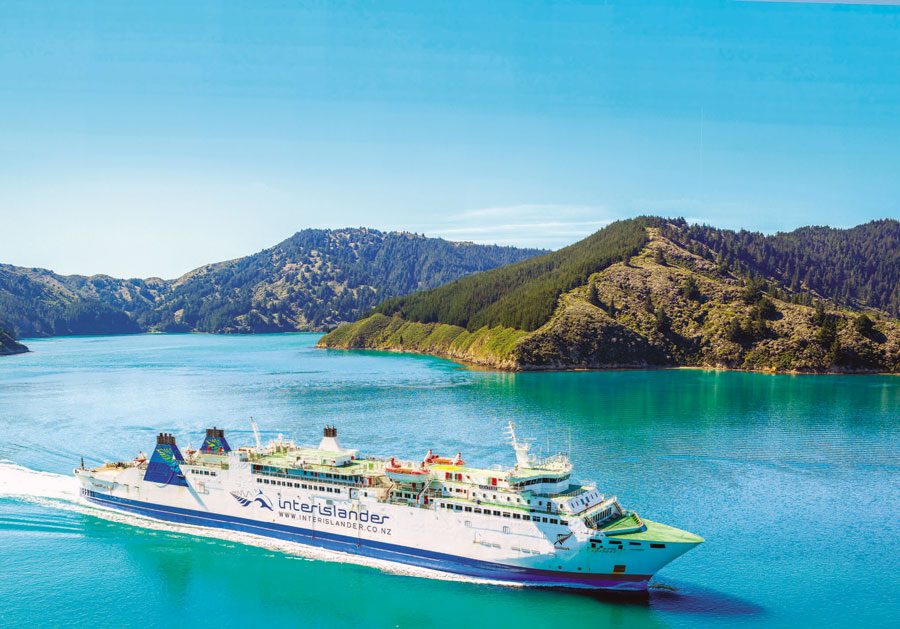 The new ferries – at 220m LOA they will be 40m longer than the current vessels – are being built by Korea’s Hyundai Mipo Dockyard at a reported cost of $551 million and are expected to arrive in 2025/26. Longer ferries need longer quays.

Benefits of the new vessels include a near-doubling of passenger capacity and tripling the rail freight capacity over the existing ferries. They will also reduce carbon emissions by using battery power for manoeuvring.

The existing ferries carry 5.5 million tonnes of freight and 850,000 passengers across the Cook Strait annually.

Up the Creek: Matakana