The Whangarei Cruising Club (WCC) celebrates its centenary this year, and as you’d expect from a facility of that vintage, it carries a rich and colourful history. Story by Lawrence Schäffler based on the memories supplied by Alf Attwood (1920 – 2009).

Whangarei – in the early 1920s – had no clubs and few yachts of any kind. There was no organised sailing, apart from the New Year’s Day Regatta at Onerahi which attracted mainly visitors.
That all changed on 26 April 1921 following a visit by the Governor of New Zealand, Lord Jellicoe. He arrived on the government steamer – the Tutanekai – and was met by a small fleet of launches off Manganese Point and escorted to Onerahi. A fairly modest welcome. 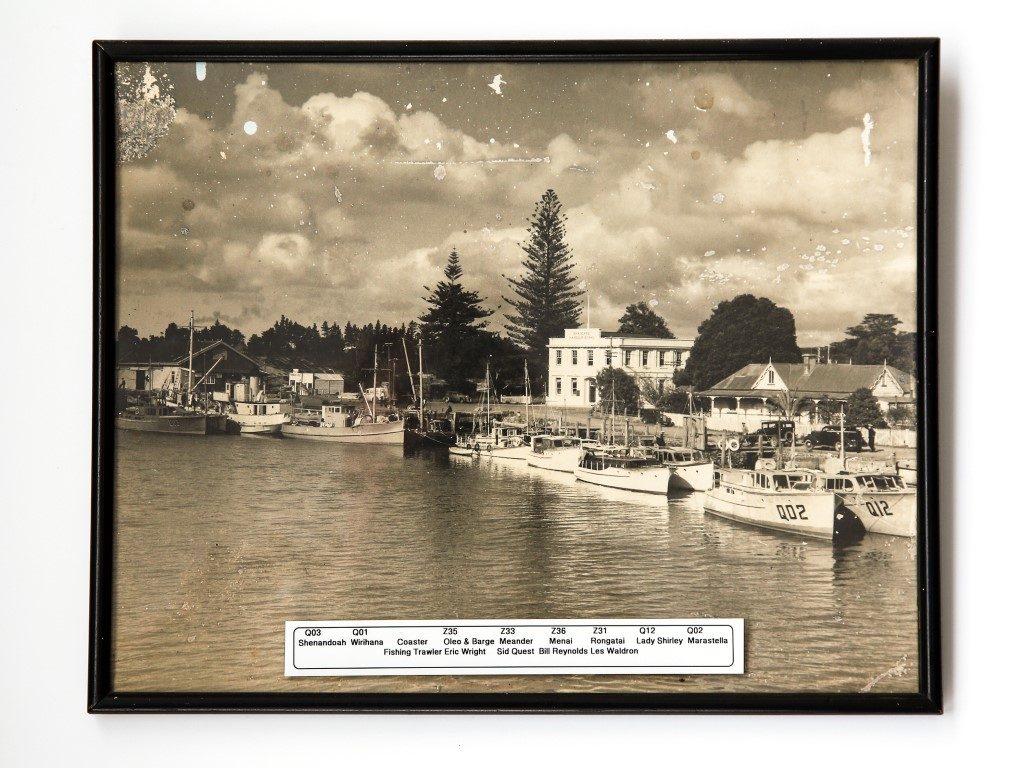 The town fathers decided something more formal was needed and WCC was born. Arthur Pickmere – a man who understood the value of sailing and seamanship – was the founding Commodore. Comprising just a handful of seven-footers (the club’s first class of racing yachts) these were indeed humble beginnings. But it was a start.
As with many of our early yacht clubs, money was tight. The first clubhouse was an old hall sourced from Whakapara. It cost £30 and on 14 Nov 1921 it was moved to a half-acre site (a mangrove swamp) leased from the Harbour Board for 1 Guinea/year for 99 years. The first AGM had been held two months earlier. It attracted about 40 members who promptly established the club’s flag – a blue triangle with a white diagonal cross. Subscriptions were £1 a year. 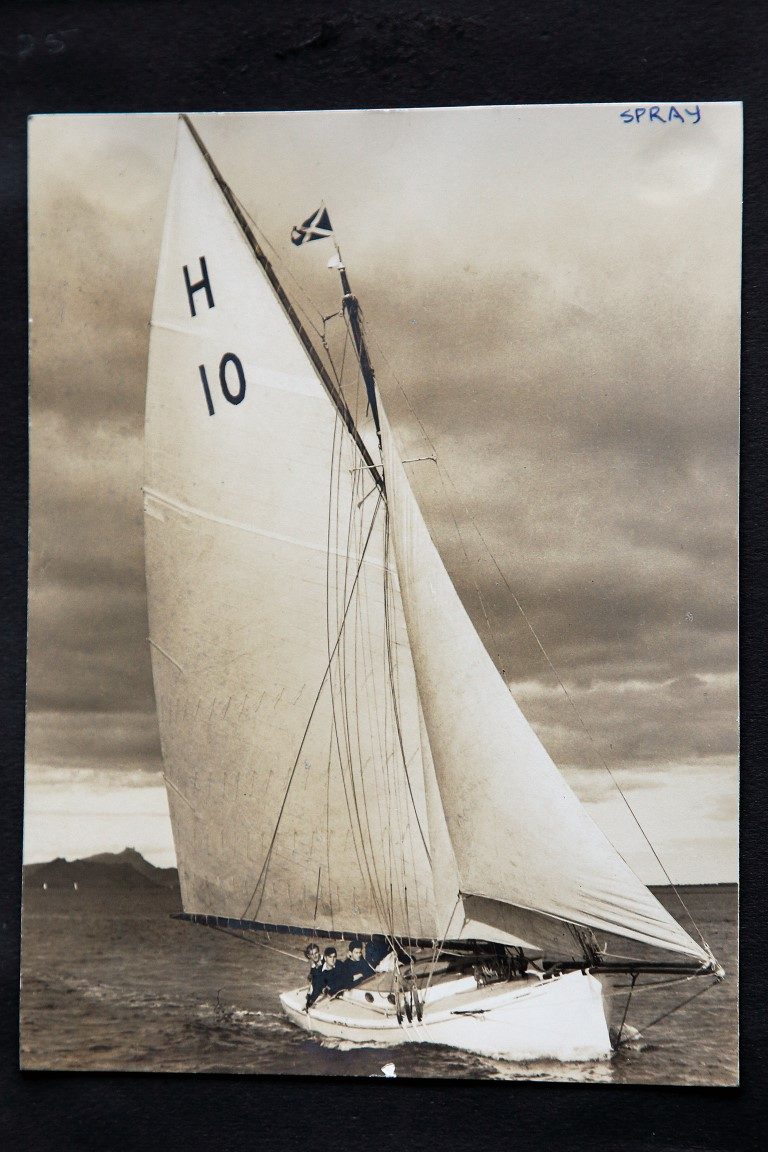 Research into the club’s early activities reveals a cast of larger-than-life characters who left a lasting legacy. William (Bill) Fraser, for example, was the Whangarei Harbour Board engineer. He is responsible for today’s winding, scenic channel from Kissing Point to the marina – he could have decided on a bland, straight channel. He also released a flock of shags into the area to contain the eels he believed were eating too many young flounder. In 1923 he was made WCC’s first life member. 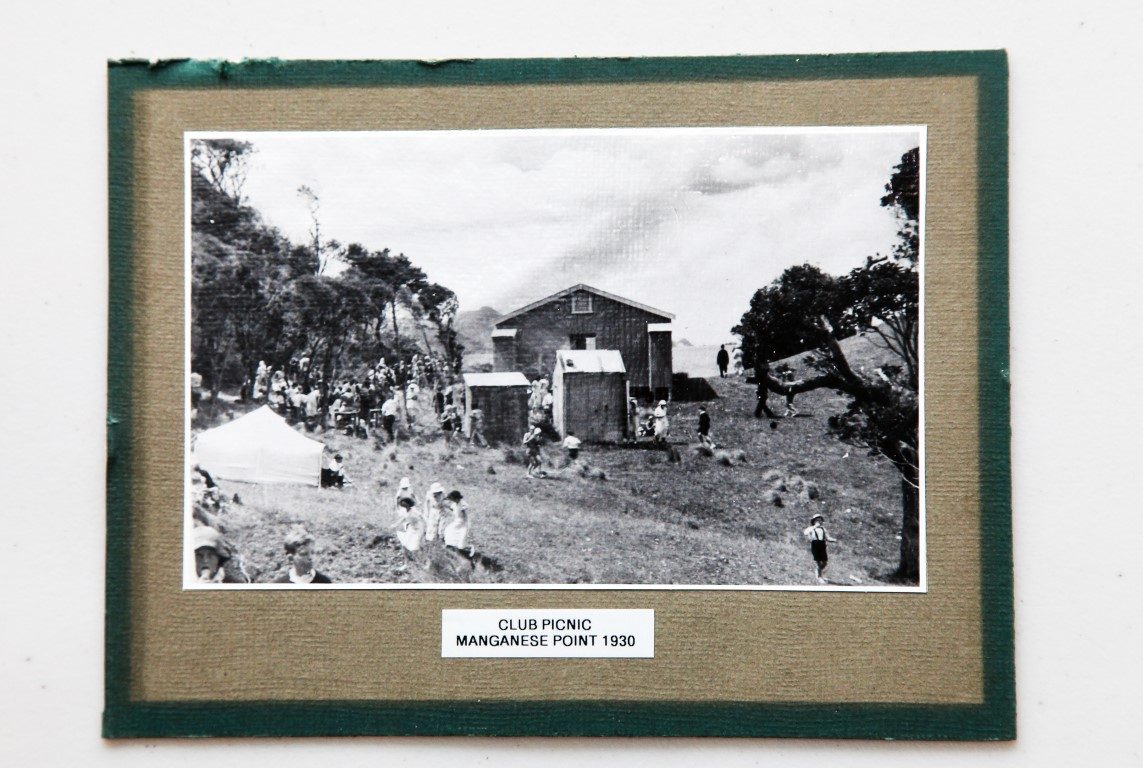 Skipper Paterson was another. He owned a fleet of tugs and his Rakanui would tow a large barge – Big Tree – transporting fuel from Auckland. A visionary with a good heart, he bought land at Manganese Point and turned it into a leisure park.
The site included a wharf and a dancing hall, with swings and a large slide for the kids. On hot, summer Sundays he’d transport parents and children down the harbour to Manganese Point for picnics at a cost of 2/6. There were races, tug-of-war, lolly scrambles and various sports. He also ran moonlight cruises.
A WCC yacht – a 14ft Z Class – represented the club for the first time in a provincial regatta in the 1934-35. The ladies did a great job (by organising dances and cake stalls) to raise the required funds.
Of course, things didn’t always go smoothly. In 1938 a site further up the Hatea River became the outlet for the Whangarei Borough sewage – pumped into the outgoing tide. That was the end of pipi collections at Limeburners Creek. Worse, the Town Basin and harbour were contaminated with paper and condoms hanging from the mangrove branches and mooring lines. The solids drifting around the boats were called ‘moon fish’. It finally ended in 1966. Phew! 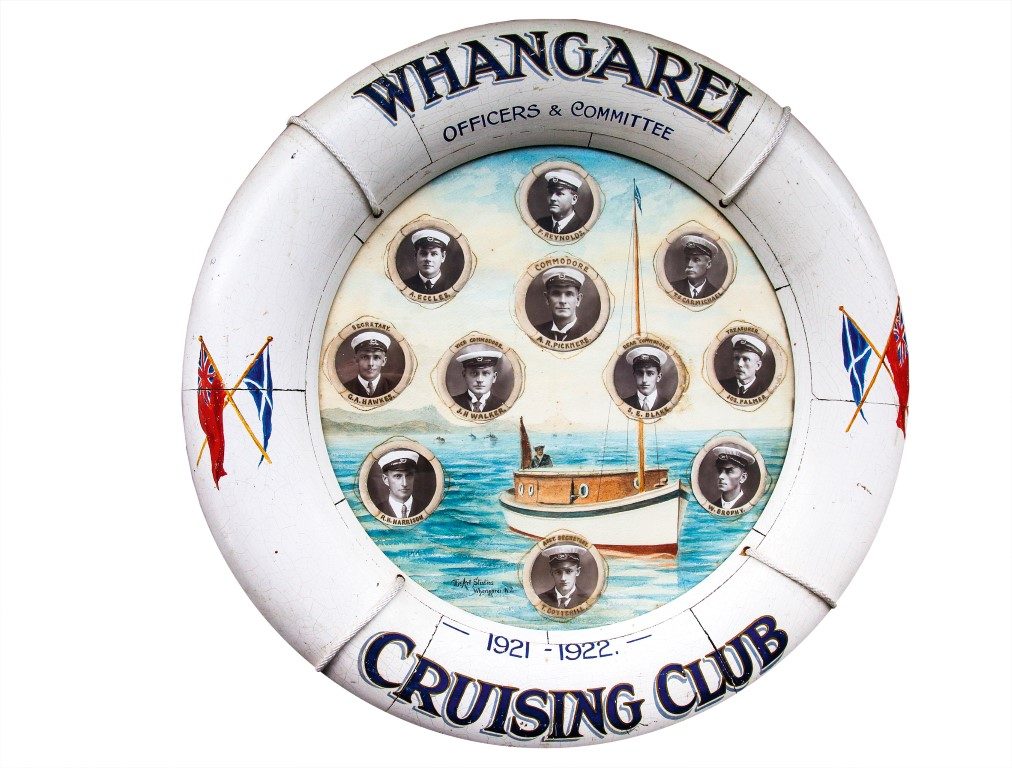 Still, progress was steady. Interest in Skipper Paterson’s leisure park began to wane and in 1939 he gave WCC a piece of the land to promote sailing among the youth. Members soon built a bunkhouse and it was well used. Most of the yachts were Star Class, Idle Alongs, Z Class and 14-footers. It encouraged independence among younger sailors – they would go away for the weekend, sailing longer races, camping and fishing.
After the WWII lull things once again moved forward. The old clubhouse piles had rotted. They were replaced by concrete foundations and bearers, with new timber floor joists, bottom plates and flooring. A new roof – along with septic tanks and toilets – was added.
In 1949 the club leased some land below Orams Boatyard (where the Anchor Inn is now) – it became the launching site for the fleet of 28 7-footers. A working bee resulted in the construction of a new slipway – it was also used by the Whangarei Speed Boat Club. WCC gave up the lease in 1955, opting instead for a new lease at Kissing Point. A year later the P Class fleet moved there.

Barney’s Barrell
The 1950s also marked a resurgence in ‘adventure sailing’ – thanks to Barney Finch. He was the founder of ‘Barney’s Barrel’. He’d joined the club in the 1920s and was Commodore from 1944-48. He was unwavering in his support of WCC and served it for half a century.
In the 1950s many felt the ‘culture’ of sailing had changed for the worse. Barney’s Barrel was Barney’s fix – a fun race to recreate old-style social events. Starting at 12h30 on Saturdays, the crews jumped into their dinghies and rowed out to their yachts, upped anchors and headed for the start line.
One yacht volunteered to carry the keg of beer for the evening’s entertainment at Limestone Island. A beach bonfire included a meal of pipis, mussels, sausages and steak, all cooked on sheets of cast iron.

P-Class is born
One of the most celebrated events in WCC’s history is the birth of the 7-foot P Class dinghy. Its origins date back to the Onerahi Regatta on New Year’s Day 1920, when the prototype of this now iconic dinghy was launched, to considerable amusement. Who’d ever seen a ‘model’ yacht sailed by a grown man?
It was designed and built by Harry Highet, a draftsman in Whangarei’s Public Works Department, but also a sailor and experienced boatbuilder. Dressed in white ‘ducks’ complete with yachting cap and smoking his pipe (as usual) Harry debuted his little boat, Mascot. 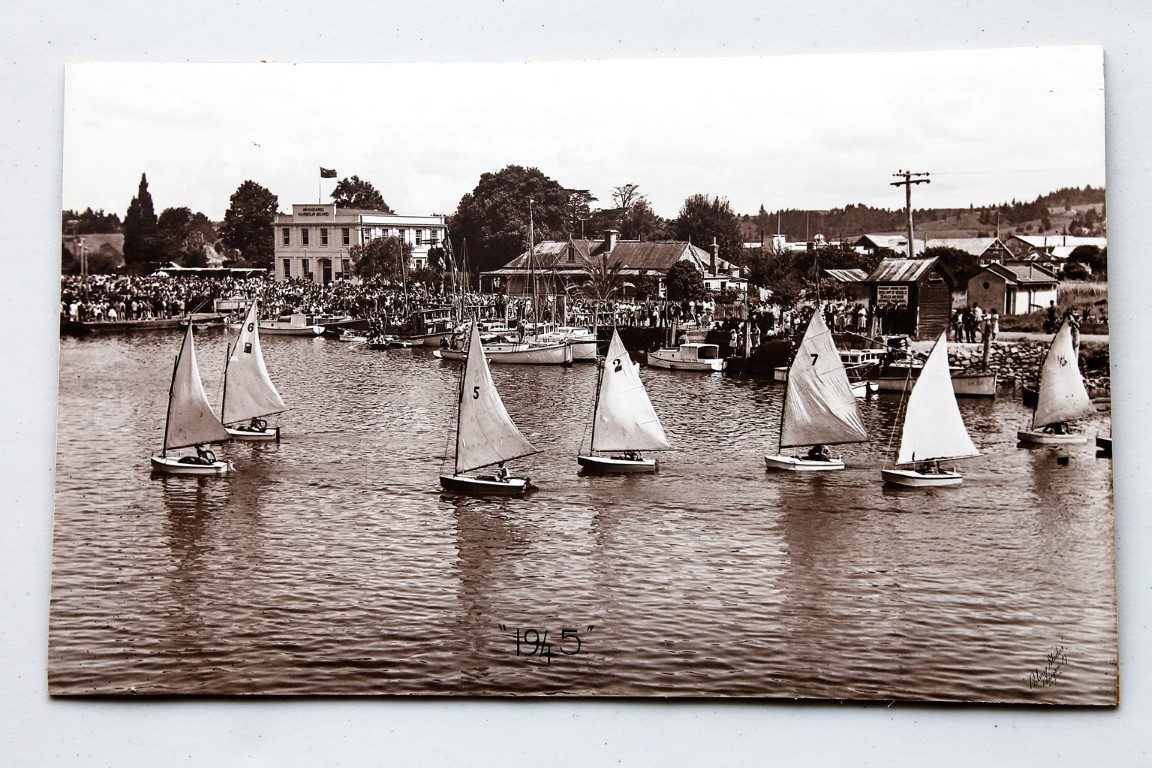 Despite the laughter, the idea of a small, unsinkable trainer appealed to Arthur Pickmere. He could see it would be perfect for young people learning to sail. Arthur asked Harry to build a boat for his son, Hereward.
Halcyon was launched in November 1920. Fitted with a 15-foot marconi rig her first sail wasn’t a great success – she capsized in a southwesterly gale, suffering broken crosstrees and damaged boom fittings. Hereward spent three days repairing her. But the first P Class Race (three entrants) was held in 1922 – featuring H. Highet, H. Pickmere and T. Hollows.
After much experimentation with Halcyon’s rig Harry designed a simpler one-design – easier to build and rig – and after further improvements his fourth boat – Firefly – became the prototype for the Class. Several more were built before Harry was transferred to Tauranga, taking the design with him. There the class took off and became known as the Tauranga Class Yacht. Today it is used by thousands of learner sailors.

The Modern Era
WCC’s history is split across two clubhouses. Its original headquarters shifted from the Town Basin to Kissing Point, where the new clubhouse was opened in 1959. Twenty years later, in 1979, additional club rooms were established at Parua Bay, catering for trailer and centreboard yachts.
Since then the club has enjoyed numerous modifications and adjustments – all characteristics of a vibrant, dynamic fratenity. Congratulations Whangarei Cruising Club – enjoy the celebrations. 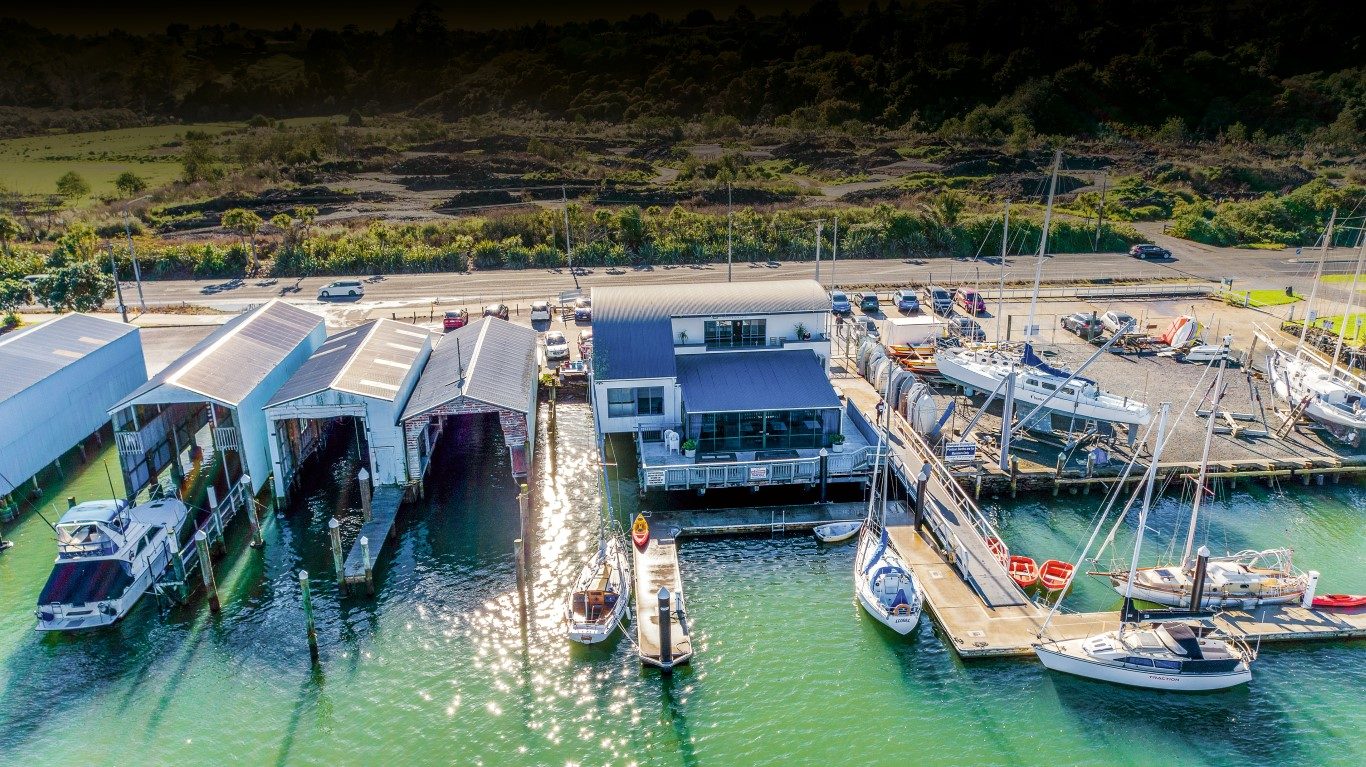