William Gibbons Foote was born in Newfoundland in 1855, the son of William Foote, a sawmiller at Exploits River. It was a tough life of short summers and long, harsh winters. From the 1860s the local economy went into a steep decline as the fishing industry suffered from unending seasons of bad weather.

Like many others in Newfoundland and Nova Scotia, William Sr. decided to emigrate with his family to New Zealand in a diaspora that enriched this country with families of mainly Scots ancestry. They settled in areas from Waipu to Invercargill. 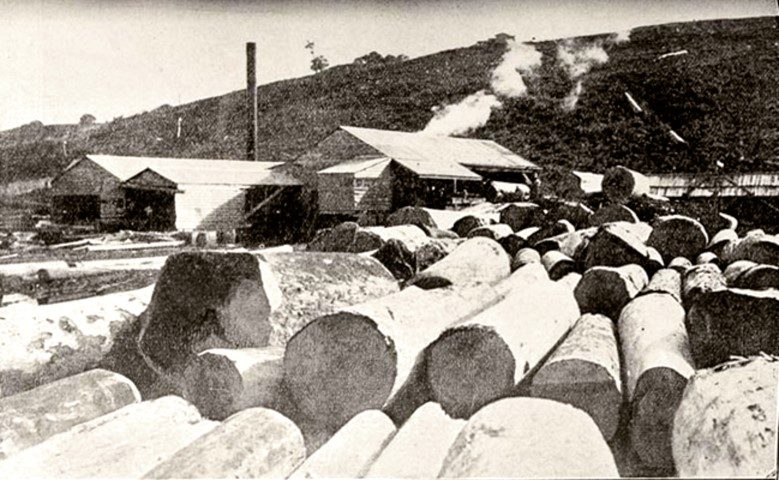 The related Gibbons family had already moved to New Zealand in 1852, sending back reports of their successful kauri milling operation at Huia. In 1862, along with Robert Peace and George Davie, William Foote looked for a suitable ship to take their families. They bought the 132-ton brigantine Clara, built in Prince Edward Island, loaded Foote’s sawmilling machinery and his steam engine down low as ballast and set sail for the sunny South Seas.

Clara had an eventful voyage from St. Johns, Newfoundland to Onehunga. She was nearly sunk by a steamer off Brazil, which had no look-out, and overall it was a troublesome voyage via Cape Town and Melbourne taking six months, two of which were spent in Melbourne sorting out deficiencies in equipment for which huge fines had to be paid to the port authorities.

The Foote family was soon deeply involved in kauri milling, first at Huia, Whatipu and Parahara in the Waitakeres with the Gibbonses, then on to North Auckland, working out large stands of kauri between Whangarei and Russell.

In 1899 Will Foote and his older brother Fred were running a highly productive timber mill at Whakapara, just north of Hikurangi, for three years, contracting to the giant Kauri Timber Company. A rail line had recently been extended from Kamo to service the coal mining and milling in the area for shipping out through Whangarei. The Foote brothers were doing well.

That year they decided to have a steam launch built, not only for recreation up the Northland coast, but also to reconnoitre for pockets of kauri for future felling. In February 1899 the Northern Advocate announced that Fred and Will Foote had commissioned Charles Bailey Jr to build a steam yacht at the Whakapara mill. It was a welcome commission. 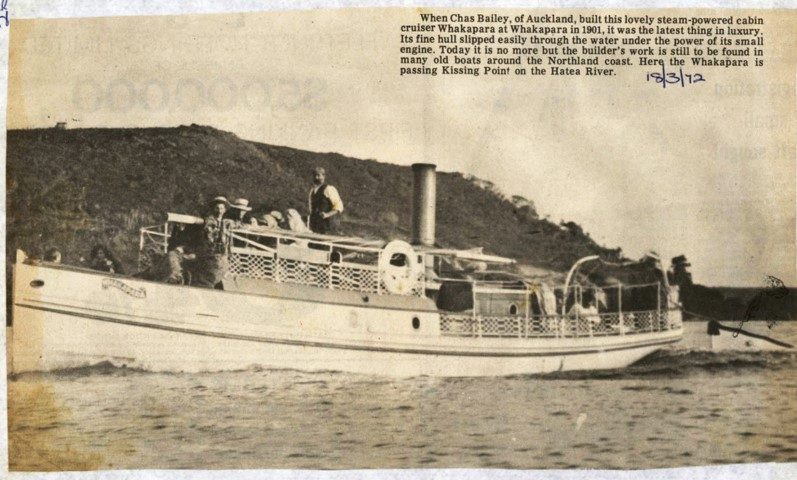 Bailey had just terminated his partnership with his brother Walter and was in the process of working his way out of a bankruptcy. By July that year Bailey’s team had completed the launch, Whakapara, and she was railed to Whangarei for launching. She was 45ft LOA with a beam of 9ft 6ins and a draught of 3ft 8in. Fitted with a 20hp steam plant by A & G Price of Thames, she was the smartest little packet north of the Waitemata.

The Foote brothers kept Whakapara until late 1910 when they sold her to G.T. Bayly of Kaikoura Island, Port Fitzroy. The railway trip from the Whakapara mill had dictated a narrow beam which made her rather tender.

A subsequent owner, Hokianga mill owner G. King, had major alterations done by Joe Fell at Kohukohu which included broadening the hull from 9ft 6ins to 13ft with sponsons around the waterline, fitting a diesel and renaming her Bondi. 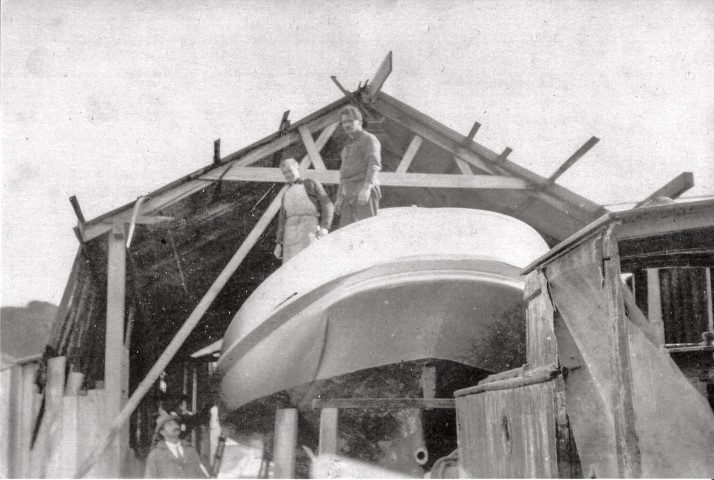 After a most colourful history around the coast of both North and South Islands, working on the Hokianga, Whangape, Greymouth, Lyttelton and Tauranga, she survives today in Auckland as the jaunty motor launch Bondi Belle.

Will Foote also owned another launch. Percy McIntosh of the Whangarei Town Basin launched the 27-footer Winnie May for him in January 1912 but Will sold her in April 1914 when he went to Woolgoolga in New South Wales to work the hardwood forests.

When he returned to New Zealand in 1917 he went to the Hokianga to supervise the logging and milling of some remaining pockets of kauri around the harbour. Because he shifted around frequently he conceived the idea of a decent houseboat which the local steam launch Te Koroi towed from site to site.

It was a snug home (see below) and Will could live in greater comfort than in the usual bush camps. After his wife Alice died in 1920, he wound down his busy life and the houseboat became more of a holiday home for his family.

In April 1924 he contracted the Whangape steam tug Ohinemuri to tow his houseboat over the Hokianga Bar, down the coast and over the Manukau Bar. Will was something of a wag. He claimed it was so calm that he left the ornaments on the mantelpiece but complained that the tug’s smoke dirtied his white paint. 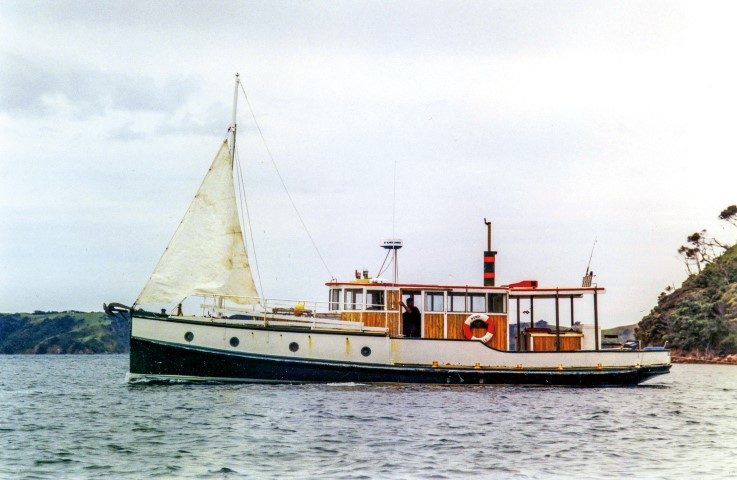 After a spell at Onehunga where she charmed the locals, he had her towed to Huia by Tom Higham’s launch Petrel. She was not there long. He met his second wife, Janie Virtue, at Huia and swallowed the anchor, living in Epsom.

After Janie died in 1937, Will bought a block of land at Tamaterau on the Whangarei Harbour and built himself a cottage, an exact replica of the houseboat cottage, which he kept until he died in 1946.

Much of this article is inspired by Bill Haigh’s fine history of the Foote family, Foote Prints Among the Kauri. The book is now in its third printing and copies are available from Bill at 73 Hone Heke Road, Kerikeri 0230.

The New Zealand Herald of 19 April 1924 described Will Foote’s houseboat as follows:

“The boat portion of the house is a heavy totara pontoon, 43ft. 6in. in length and 19ft. in beam, with a depth of 3ft 7½ in. It represents the section of the suburban dweller, while the ‘garden fence’ is supplied by a neat white railing, running around the edge of the pontoon. The house does not cover the whole area of the pontoon, and thus is left plenty of space for the ‘back garden.’

“The dimensions of the house are 25ft in length by 12ft wide. The timber is rimu. For an example of sturdy workmanship, the dwelling is one of the best. It is not built right on to the timber of the punt, but mounted on 6×4 skids. It is perfectly rigid, and there is not a join in the lining boards. The design was Mr Foote’s own, and the house was built under his supervision and with his assistance. It was constructed on shore on a special foundation and was thus easily brought off on to the pontoon.

“It has three rooms and a front verandah. The walls are painted white, and the roof is red, while ‘the marine’ touch to an otherwise ordinary cottage is given by the flagpole with the waving Red Ensign and a red and white pennant. To step through the front doorway into the finely-furnished living room is to receive an impression of comfort and refinement. Here is no suggestion of a rough yachting cabin, or even a well got up launch cabin.

“This is a real home. A full-size range stands in a recess and is not prominent in the room. Carpets on the floor, pictures and trophies on the walls, curios on the mantelpiece, flowers on the table – and everything spotlessly clean and in its place. Space has, of course, to be considered, but Mr Foote has the happy knack of packing things away into the smallest of spaces, with the result that the small room seems to be much larger than it really is.

“A room opens from each side of the living room. Here is ample bedroom accommodation for the visitors who come for a summer holiday. One bed throws back to reveal the bath, another example of space economy.

“Outside is a galvanised iron tank, which draws the water supply from the roof of the house. The storeroom aft contains a valuable collection of tools, together with the miscellaneous articles which are necessary to the householder ashore and the mariner afloat. The awning which previously covered the open space at the stern of the pontoon has been replaced by a permanent iron roof. The dinghy is carried on davits.”

ON THE LOBSTER TRAIL