Trimming a boat for a more comfortable, safer and efficient ride has become much easier with Zipwake’s fully-automatic tabs, giving you more time to enjoy the company and the boat.

Though they’ve only been available for around five years in New Zealand (since Auckland’s Advance Trident Ltd – ATL – acquired the agency), the Swedish-manufactured Zipwake tabs have quickly gained a foothold.

“We’ve been enormously – and pleasantly – surprised by the demand,” says ATL director Blair Geldard. “We introduced Zipwake as a relatively unknown product and it’s fair to say the boating fraternity’s initial concerns swirled around performance.

“Would they create too much drag, slow the boat and increase fuel consumption? Well, five years later those perceptions have shifted dramatically – the growth’s been meteoric and the feedback overwhelmingly positive.” 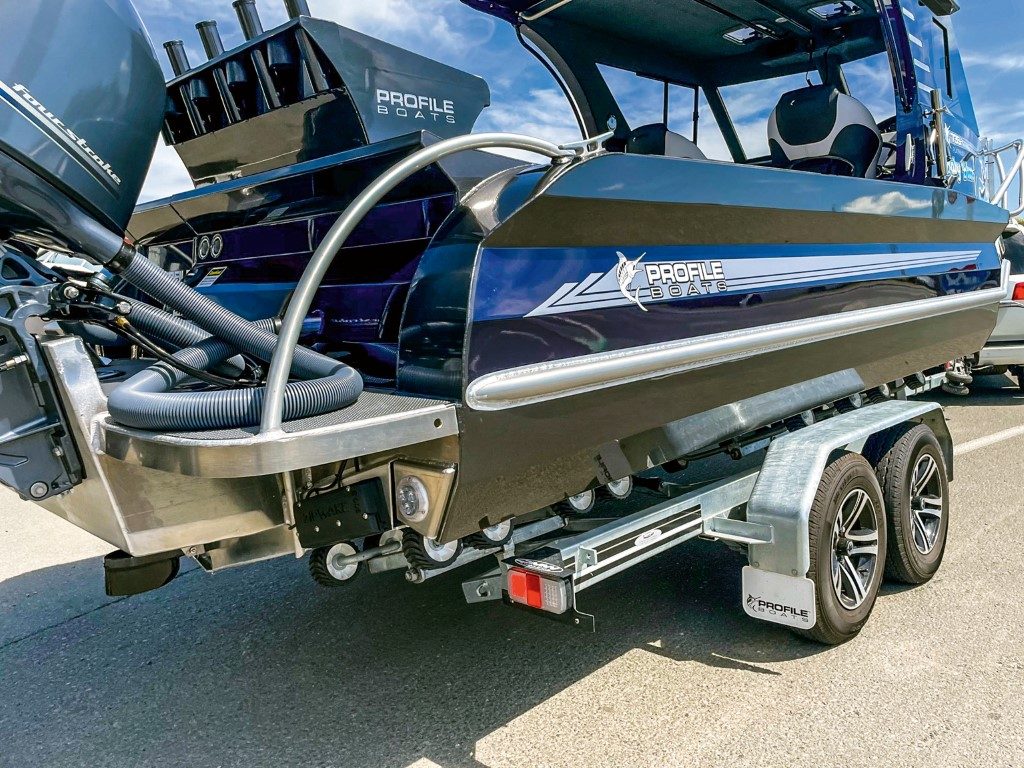 Much of the growth, he says, is directly attributable to the proven performance of the product. “Most systems are being sold to OEMs – boat manufacturers interested in offering their customers the opportunity to optimise the boating experience.”

Zipwake tabs (Interceptors) operate at five times the speed of conventional tabs, offering instant trim. They can be run in Manual or Automatic modes and the colour LCD display gives users full visibility of the their position and the boat’s performance.

“Fully automatic – Zipwake does it all for you,” says Haines Hunter’s Dennis Kendall. “They’re very efficient and operate exceptionally well,” says Bill Upfold. “We now fit them as a matter of course.”

A fair percentage of the installations also find their way to the retrofit market – boaties wanting to enhance their existing vessel’s performance. A Zipwake system is sold as a complete plug-n-play ‘kit’ and it’s a relatively easy project for a competent DIYer. 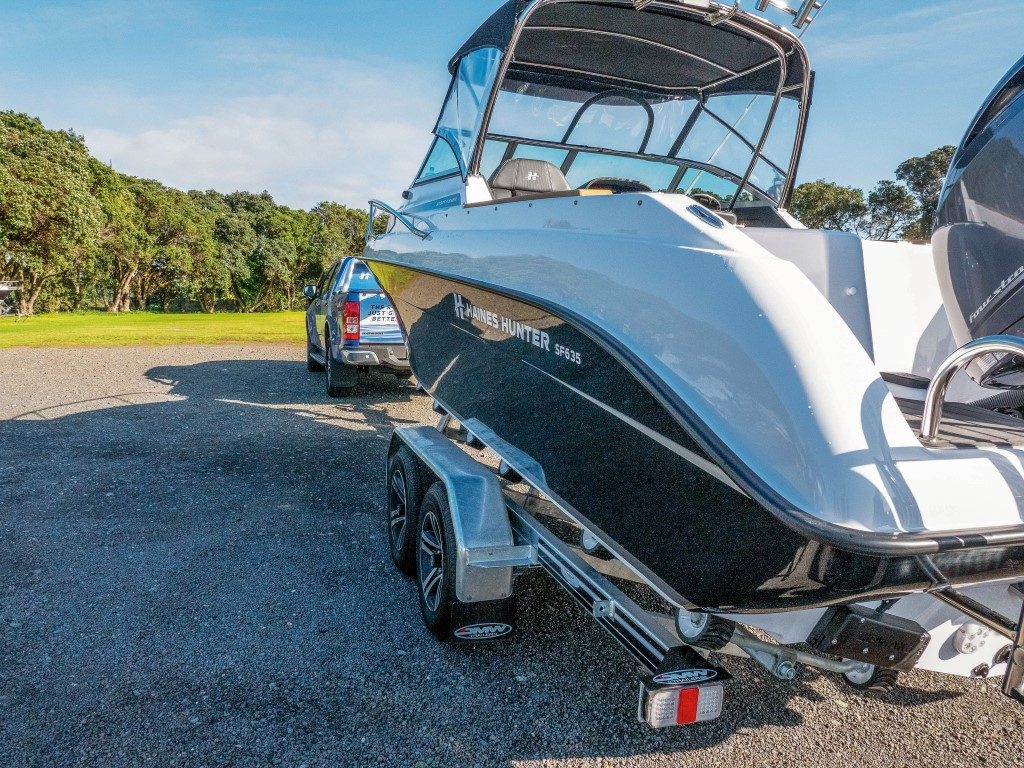 “Another factor in the technology’s appeal,” says Geldard, “is the versatility offered by the Zipwake range. There are two series – S and E – for smaller and larger vessels respectively. Within these segments there are the conventional straight Interceptors, the curved models designed to fit around tunnel transoms, as well as those which mirror the chines on the edge of a hull. This variety has seen the tabs successfully fitted to many hulls of different shapes and sizes.”

He also points out that the ‘mix-n-match’ nature of the S- and E-series makes it easier to find custom solutions for any boat – an installation might feature a blend of models from both series to optimise the available space along a transom. 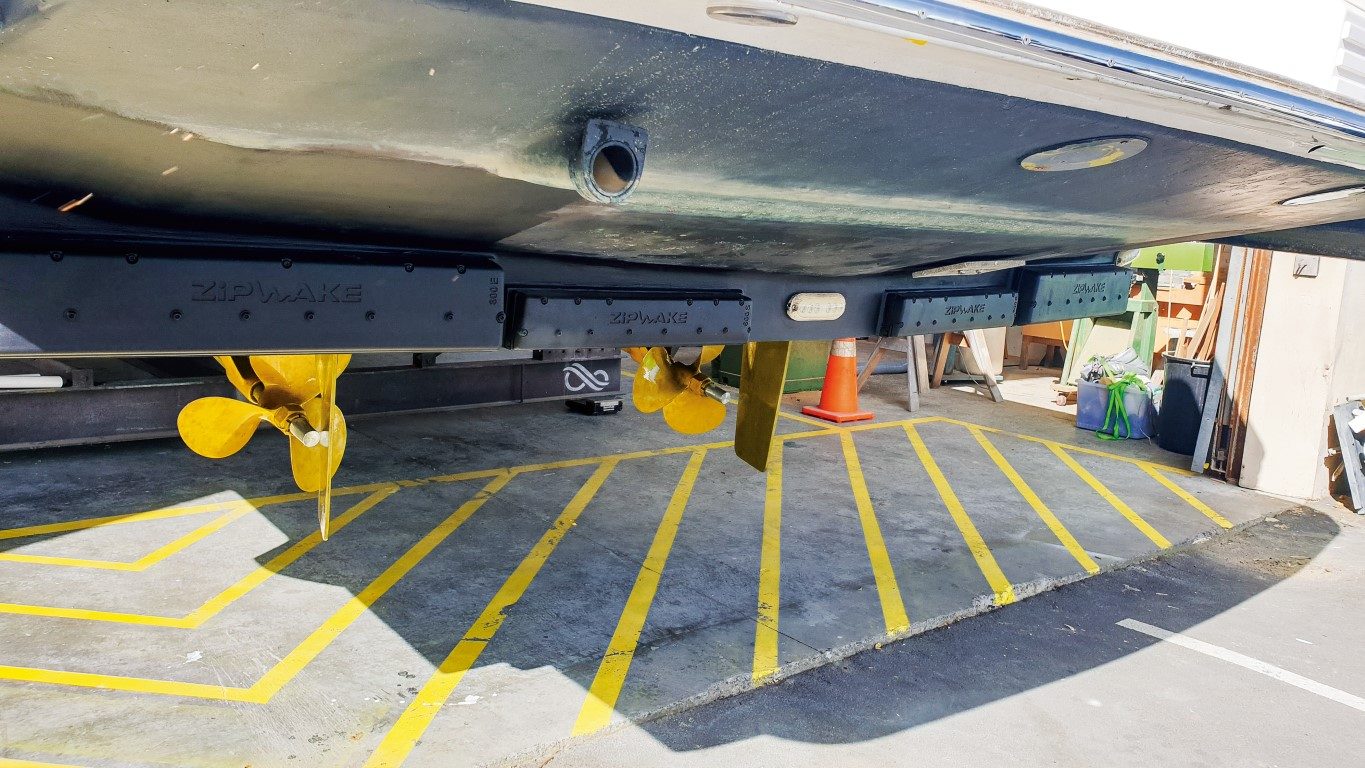 Unlike conventional trim tabs which feature plates actuated by rams, Zipwake tabs comprise a ‘blade’ moving in a vertical plane, electrically-driven by a servo motor(s). This design results in a very compact, unobtrusive unit. The blade’s maximum depth of travel (full extension) is about 25mm for S-Series, and 55mm for E-Series – in practice, with the boat planing at speed, the blades are typically extended less than 10mm. 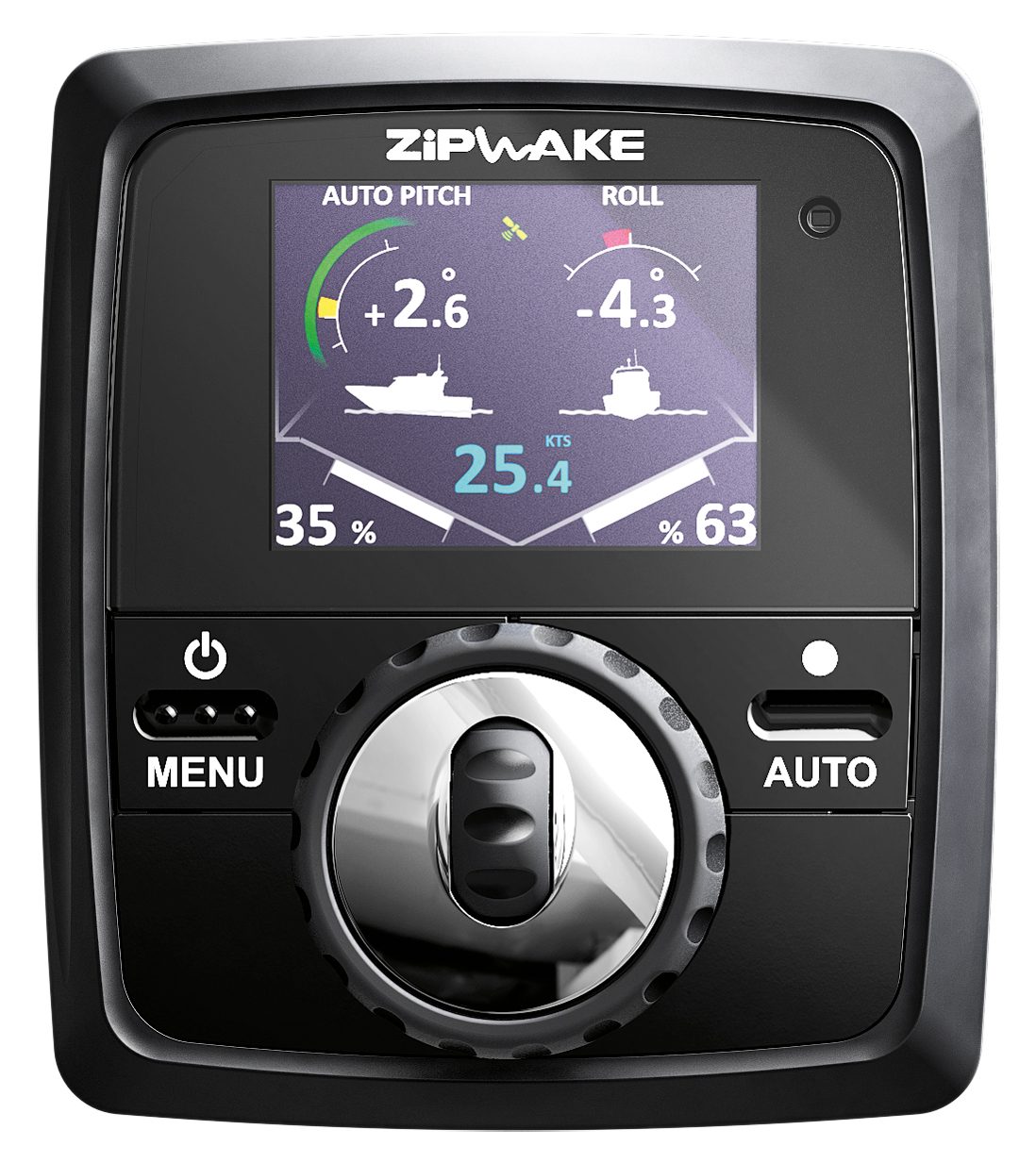 As any boatie knows, the greatest frustration with conventional trim tabs is the constant adjustment required to accommodate passenger movements, or changes in direction relative to wind and waves. Zipwake blades eliminate the frustration because they are fully automatic, reacting instantaneously to changes in roll and pitch. They also remove the guesswork that comes with manual tab settings.

The automation is courtesy of an accelerometer and a GPS antenna built into the control module, mounted at the helm. Operating on 12 or 24 volts, the system’s activated with the single push of a button.

Designed for vessels up to around 16m LOA, the S-series tabs are available in four sizes – 300, 450, 600 and 750mm long. The basic rule-of-thumb for ‘sizing’ a Zipwake installation, says Geldard, is at least 50% coverage of the transom width.

A boat with a 2.5m beam, for example (a 1.2m either side of the keel) should aim for two 750mm tabs – one either side. For boats with wider transoms, fitting two tabs per side is recommended. Thanks to the plug-n-play architecture, the system automatically configures multi-tab installations. You don’t need to be a programming whizz!

These are designed for vessels up to 35m LOA. They function just like their S-Series cousins, but because they are wider and heavier the blade is activated by two servo motors rather than one. The increased size of the Interceptors in the E-Series range means the technology can now be fitted to larger vessels, with the availability of curved units for boats with tunnel hulls. The E-Series also offers three versions of the curved tab – each with a different ‘radius’.

“We are witnessing a trend with boats and tunnels,” says Geldard, “where owners who’d previously struggled to trim their vessels are now pursuing the Zipwake tunnel solution. Pine Harbour’s Harkin Boatbuilders has installed a number of these with good success.” 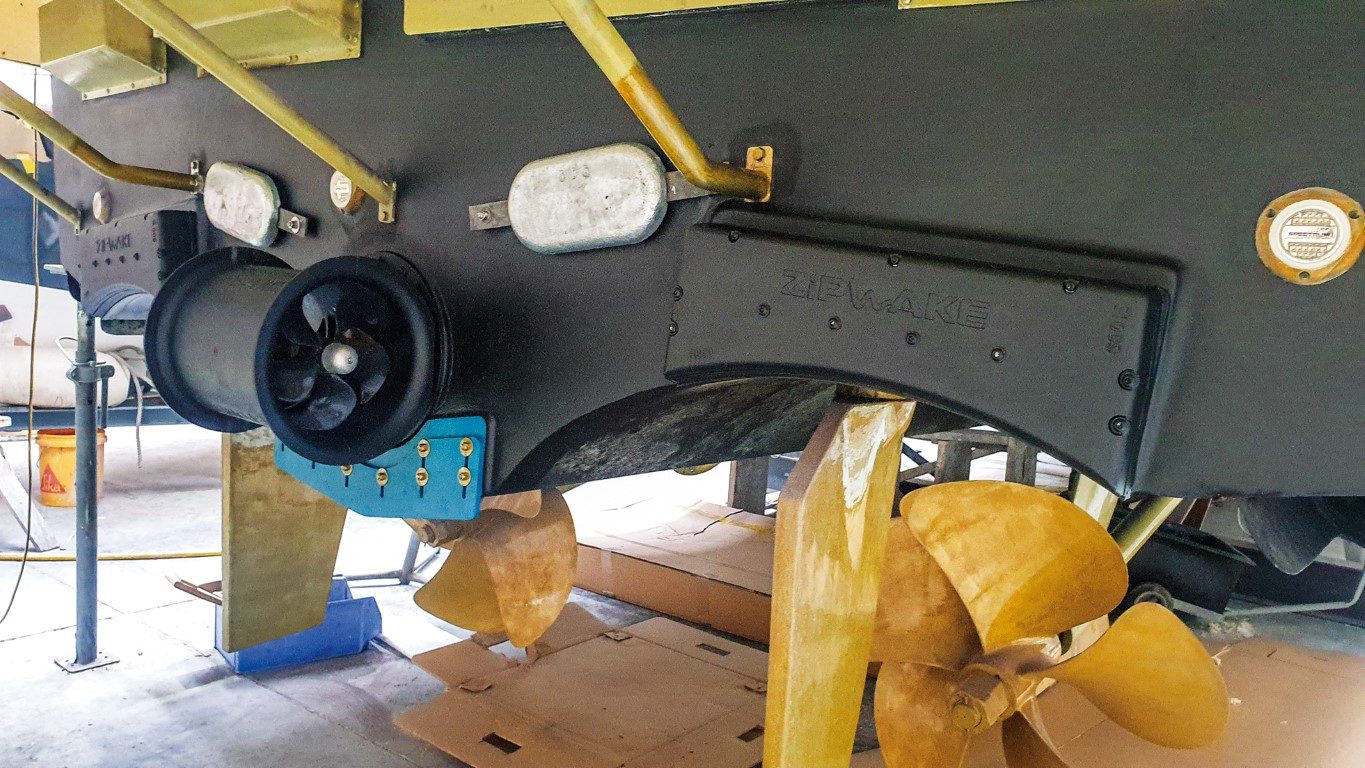 In many tunnel installations, he adds, the transom will be fitted with a combination of curved and straight tabs. And depending on the available vertical space on the transom, some vessels might need a combination of E- and S-Series tabs. Again, the plug-n-play smarts handle such configurations automatically.

Both E- and S-Series tabs also feature models designed to be mounted at the outer extremity of a transom – the outside edge of the blade is equipped with an angled section to mirror the boat’s chines.

One of the most interesting illustrations of how Zipwake tabs affect a boat’s performance can be seen in its wake. Because the aft end is lifted as the tabs are deployed – the vessel then rides with a more ‘level’ attitude – it often leaves a cleaner wake, which in turn reduces the amount of water coming aboard the aft platform.

The Alexandra Shackleton: BACK FROM THE ICE