In a dusty Christchurch shed lies a replica of a famous vessel linked to one of the greatest survival stories of all time – the James Caird and Shackleton’s incredible voyage in her. Words by Matt Vance.

The heroic era of Antarctic exploration is littered with stories of survival and endurance. These grim exploits are, for the most part, set firmly on the continent of Antarctica. The blinding white of the ice seemed to eclipse all but the most remarkable. But, the most extraordinary of all these stories occurred, not in Antarctica, but deep in the Southern Ocean. 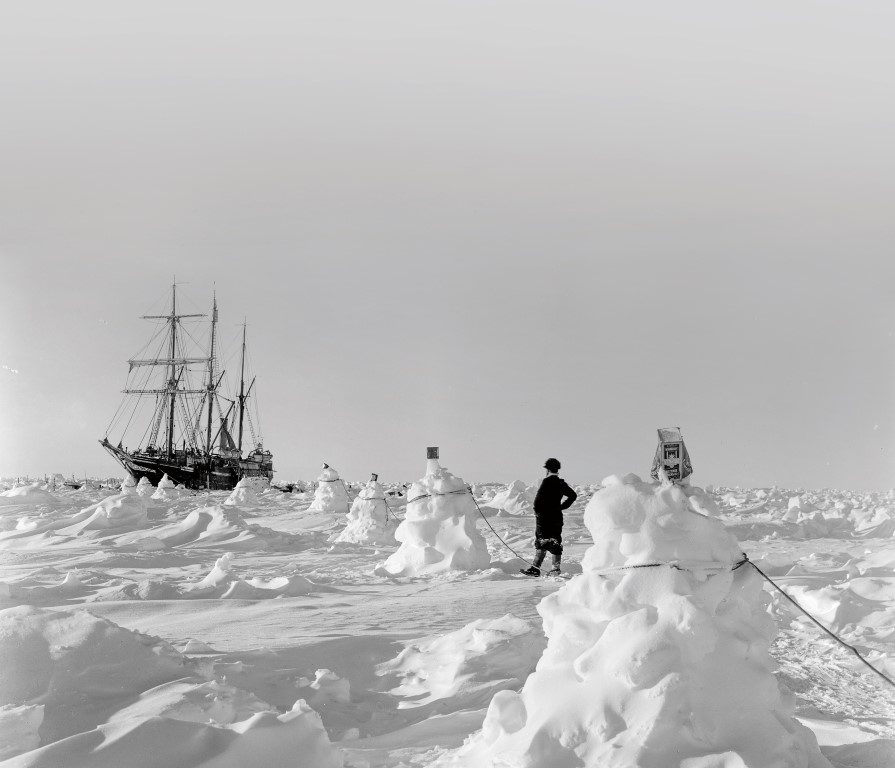 In 1914 tenacious British explorer Sir Ernest Shackleton attempted one of the most difficult journeys of modern times. While Roald Amundsen had reached the South Geographic Pole with a professional precision well beyond his time and Captain Falcon Scott had achieved unprecedented fame for failing in his attempt at the same, there was only one option left.

Shackleton and his team hoped to be the first to make an overland crossing of Antarctica from the Weddell Sea on the South American side to the Ross Sea on the New Zealand side, via the South Geographic Pole. It was an audacious idea that only succeeded in being achieved much later in 1958 by Sir Vivian Fuchs and Sir Edmund Hillary with the boon of post-war technology to aid them.

For three years there was no word from the grandly-named Imperial Trans-Antarctic Expedition and most assumed they had perished in their attempt. In February 1915, the Endurance became stuck in pack ice. Shackleton quickly realised that they were trapped, the expedition doomed, and the ship eventually broke up under the pressure of the melting ice in October 1915.

The images of her taken by Frank Hurley as she broke up are perhaps some of the most depressing of the heroic era. The team salvaged as much as they could – including the three lifeboats, the James Caird, the Dudley Docker and the Stancombe Wills – before the Endurance was crushed and disappeared.

The crew then camped out on the drifting ice pack until the of 9th April 1916. After a hellish period of man-hauling the boats across broken pack ice, the 28 men were able to take to the boats and navigate a five-day, 347-nautical-mile sail to Elephant Island.

With the supply of seals due to disappear over winter and the winter sea ice beginning to form, staying put on Elephant Island was not an option. Well off the usual shipping routes it was going to be slow starvation without drastic measures being taken.

A plan was hatched for self-rescue that involved cannibalising parts from the three open boats to build one that was capable of sailing downwind to South Georgia.

The ship’s carpenter James McNeish set about converting the strongest of the three boats, the James Caird, into an oceangoing lifeboat. He raised the gunwales, enclosed the open deck, loaded on rocks as ballast, strengthened the stems and loaded some provisions for the voyage ahead.

On the 24th April 1916, Shackleton, his New Zealand Captain Frank Worsley and the four other crew set off from Elephant Island to South Georgia 720 miles away leaving the remaining 22 men behind. 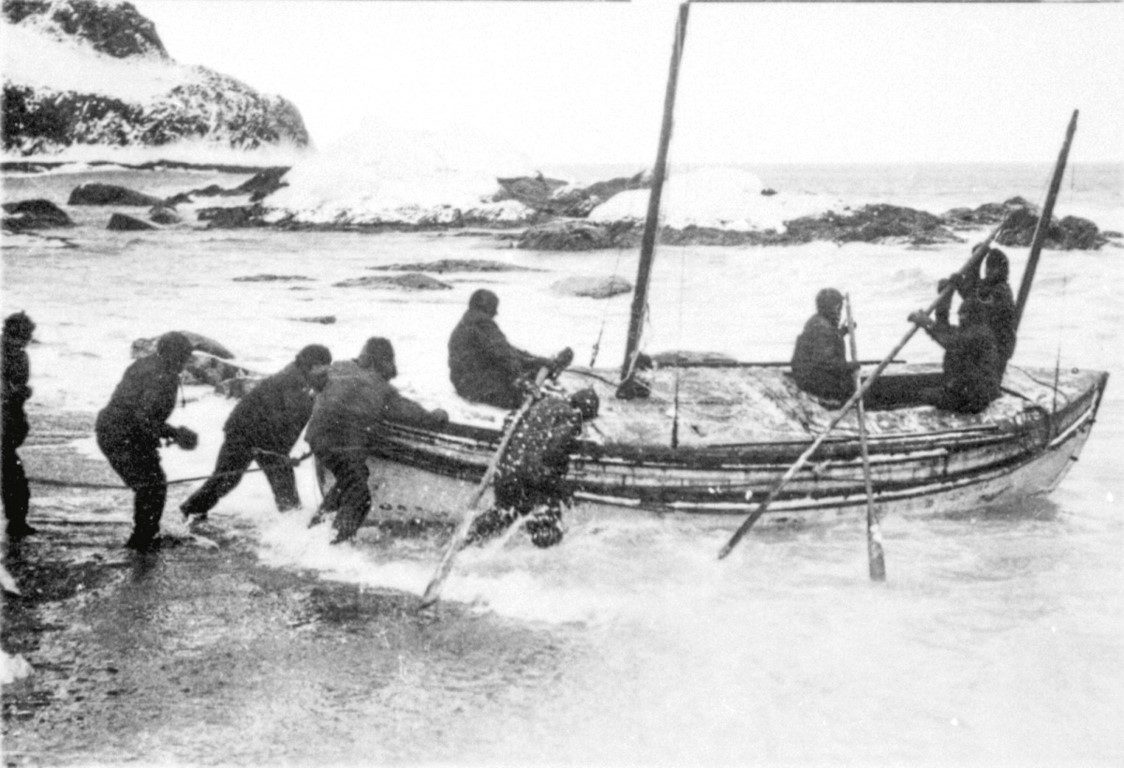 The account of this unlikely voyage has to be read to be believed. Despite conditions being typically horrendous as you’d expect for the Southern Ocean in May, Worsley’s navigation was impeccable. Rather than risk being swept past the island Shackleton landed the James Caird in King Haakon Bay on the southern side of the island.

It saved their life but meant a harrowing journey over the mountains and glaciers to reach the Norwegian whaling base on the northern coast. They drilled screws into their boots to give some grip on the ice, and the three strongest men – Shackleton, Worsley and Crean set off on a 32-mile odyssey.

They arrived in a haggard state at the Stromness whaling station from where Shackleton affected the difficult task of rescuing all of his men from King Haakon Bay and Elephant Island.

Shackleton had a knack for making mistakes and getting away with it through his ability to hold a team together. He was revered in his homeland and is still to this day used as an example by corporate team-building types. 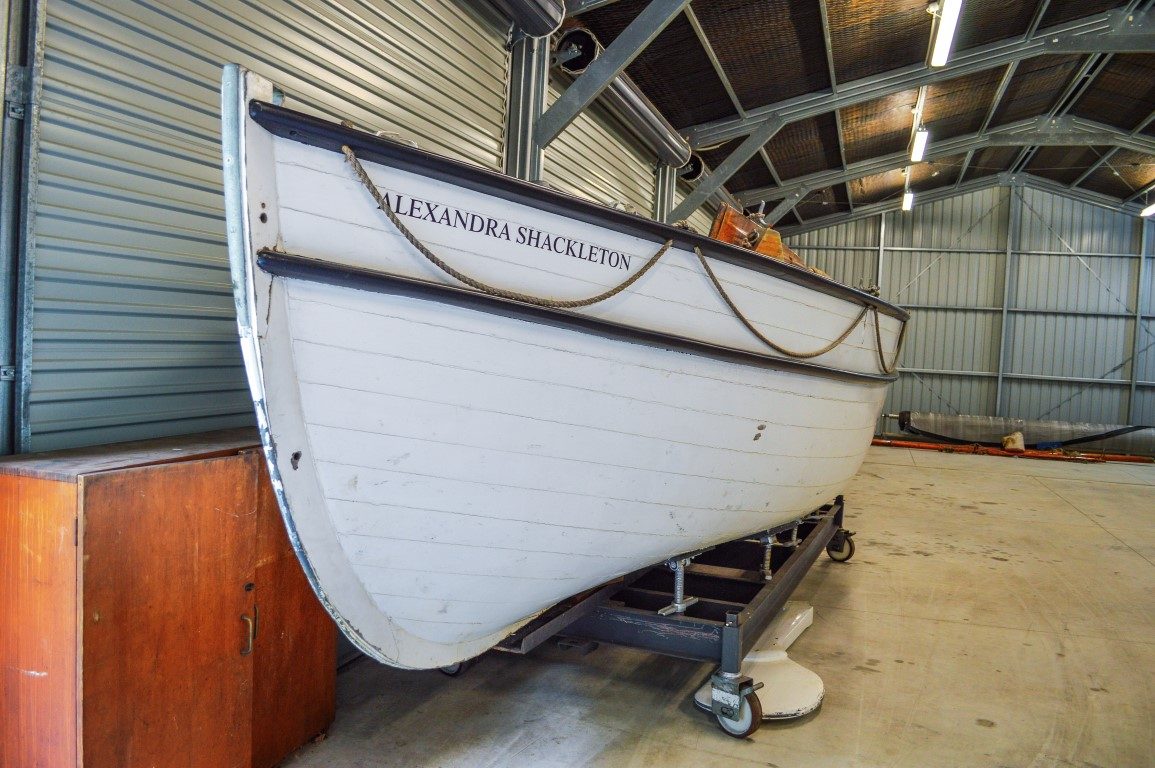 Worsley achieved further fame in WW1 by ramming and sinking a German U-Boat with his corvette but has only recently become recognised in his homeland for his exceptional skills and bravery.

The best judge of how hard a historical expedition was is when people attempt to recreate it. One hundred years on, the story of the James Caird is still a harrowing tale of endurance. Even with modern materials and technology, the chances of success are slim.

There have been several attempts at recreating the journey in 23ft replicas of the James Caird but none of them with the six men and the same technology as Shackleton had at his disposal. Until 2013, when Australian adventurer Tim Jarvis and his crew attempted the feat with, among other things, authentic period clothing, equipment and rations.

In keeping with the theme of authenticity, Jarvis had a replica of the James Caird commissioned in 2008. Built from the original plans and identical materials she was christened the Alexandra Shackleton (named after Shackleton’s granddaughter). 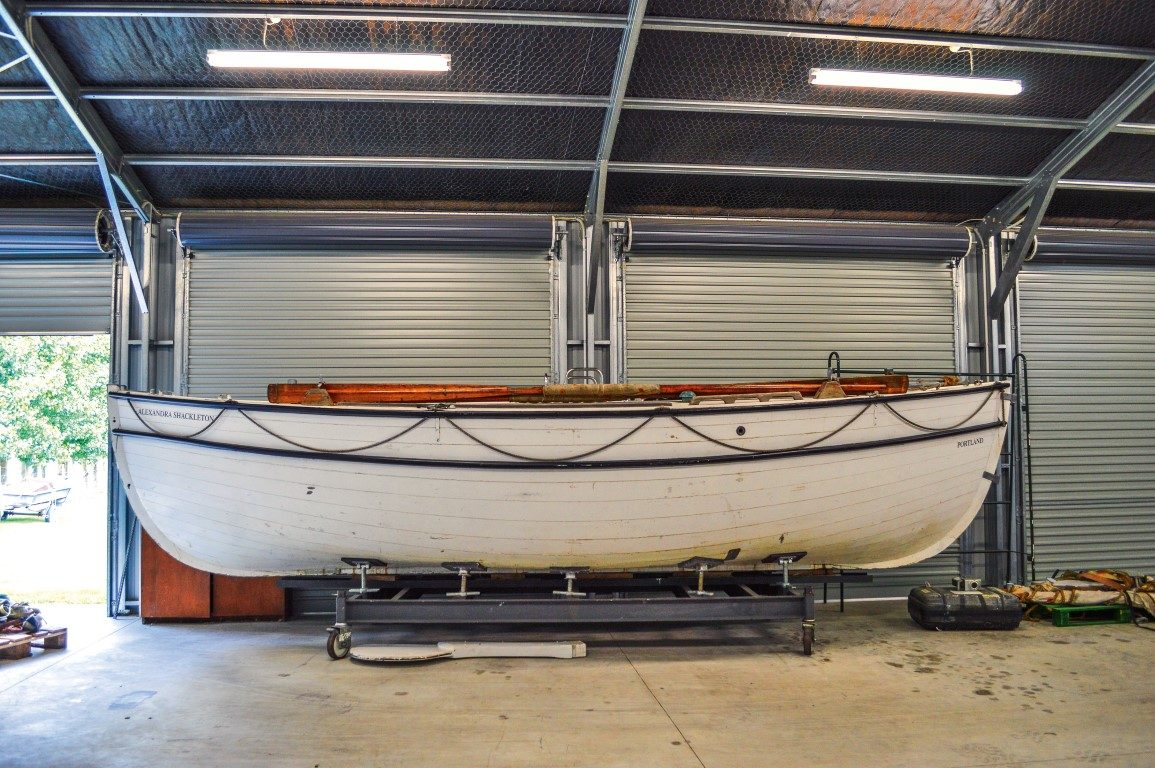 The original design was used as a whaleboat, which meant she was double-ended, light and keelless to enable her to easily follow the harpooned whale. With stumpy masts and a gaff rig, she had the upwind capabilities and handling of a plastic bag. To cap it all off both the original and replica were not self-righting so the chances of recovering from a knockdown or pitchpole were slim.

Tim Jarvis’s account of the voyage in all its cold, wet and uncomfortable misery is enough to make me consider taking up gardening. Off watch, the crew lay like sardines across the boat in wet reindeer sleeping bags that smelled like a landfill. On-deck watches consisted of one person on deck with a standby below on the bilge pump. Their only respite was an occasional dram of Mackinlay’s whiskey. 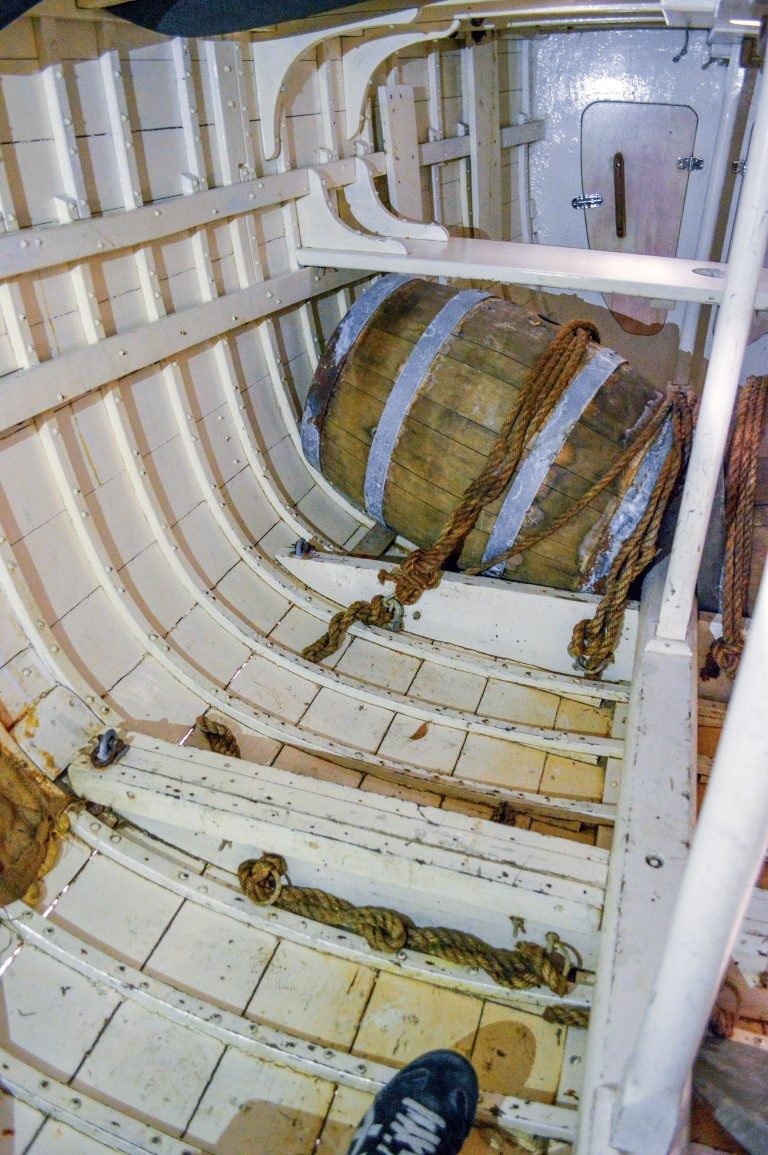 Arriving at King Haakon Bay on the south coast of South Georgia the relief was short-lived. The overland journey was only 32 miles to the old whaling base at Stromness, but it was no hike over the hill. It was serious glacier travel with technical mountaineering using improvised crampons (screws through the soles of the boots!). Perhaps more than the sea journey, this is the one part of the recreation that Jarvis and his team underestimated.

Roll forward seven years and the Alexandra Shackleton has found her way to New Zealand. She is now sitting in a shed in suburban Christchurch under the guardianship of the Christchurch Foundation awaiting plans for her new home to be finalised. 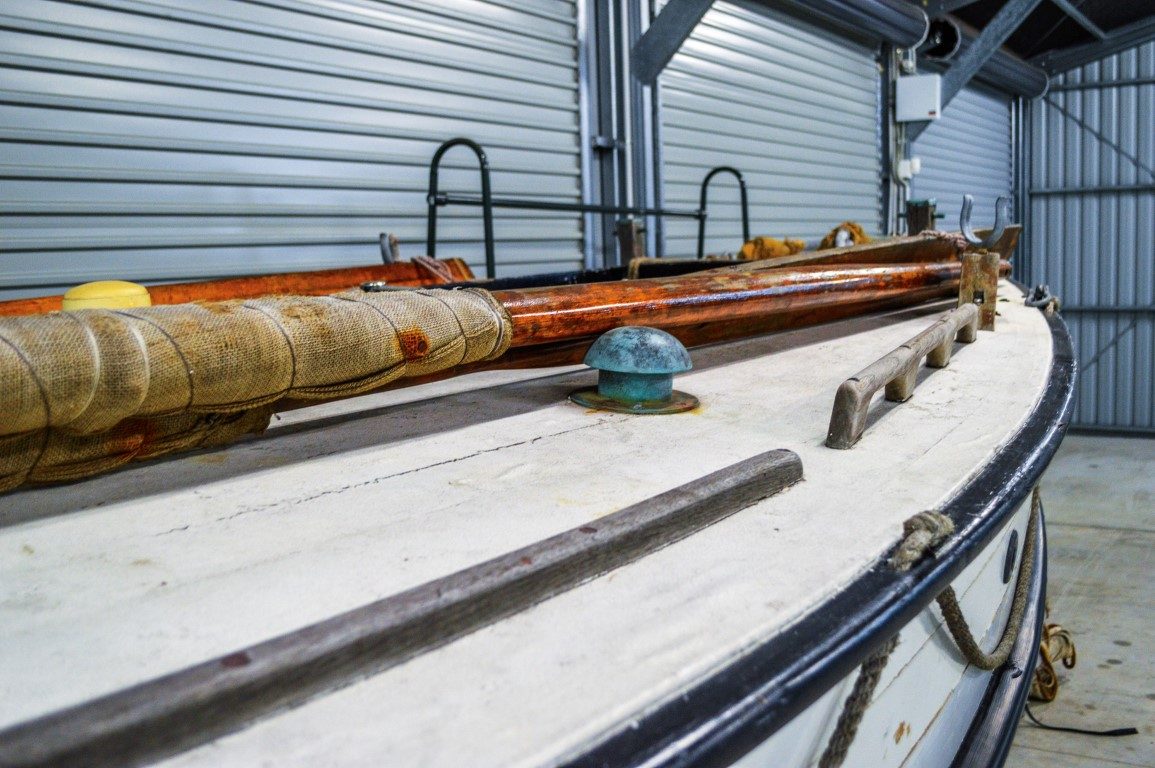 She shows the wear of hard use but has a stout dignity about her. Clambering down below you become painfully aware of how small she is and wonder aloud how six men could have squeezed into the tight accommodation. She is almost U-shaped thanks to her gunwale extensions and dark as the inside of a cow down below.

If there was any doubt about the grimness that must have pervaded the journey it is confirmed by a small bronze plaque tacked to a bulkhead declaring “England expects that every man will do his duty.” 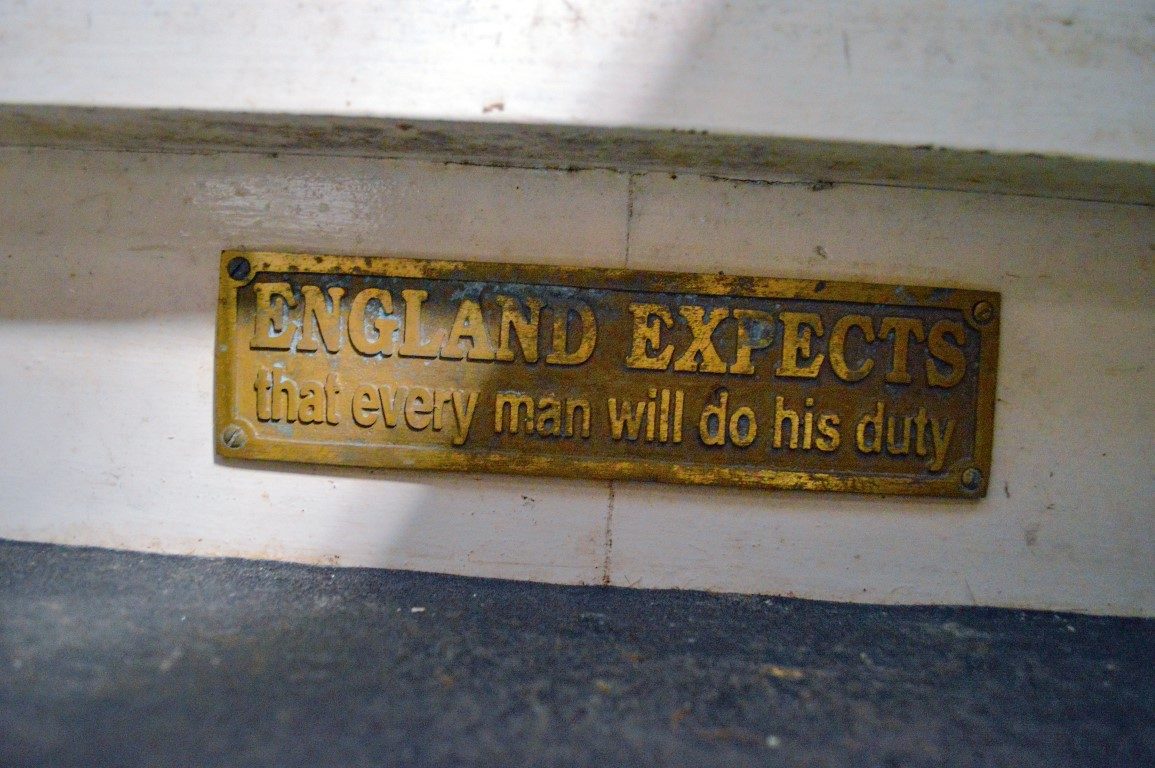 Like many stories of the heroic era of Antarctic exploration, Shackleton’s journey has produced a plethora of books and films. After all the reading and YouTube watching it is perhaps this visit to the boat that makes you want to agree with Sir Edmund Hillary when he described the expedition as “the greatest survival story of all time.”