Born in 1959, Johansen’s parents were farmers who taught him from an early age the value and importance of hard work.

“If there’s one thing my parents taught me it was commitment. I might not have been too bright but I’ve always known how to work. If you get off your arse and work you’ll get ahead. If you sit back bitching and moaning you’ll go nowhere.”

This lesson’s been doubly important to Johansen because 45 years after leaving school he still has difficulty reading and spelling. But make no mistake, what he may lack in those skills he more than makes up for in good old-fashioned street smarts.

Given the reading and spelling issue, Johansen unsurprisingly left school as soon as he found a job, which was mixing mortar for a bricklayer. But he really wanted to be a motor mechanic and within months was working for Graham Dixon Motorcycles in Paeroa, the local Yamaha and Kawasaki dealer. In those pre-quad bike days, two-wheeled farm bikes were extremely popular and qualified for tax rebates. 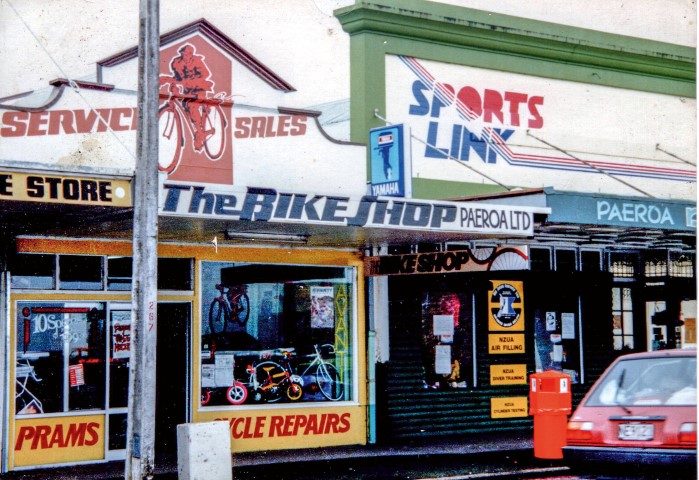 After two years with Dixon, Johansen gained an apprenticeship with Graham Trembath at Valley Mazda. It only lasted 10 months before Valley Mazda closed and Johansen was out of a job. He eventually joined John Coach at his Yamaha dealership, but when Coach’s marriage ended some months later he offered Johansen the business for $7,500.

Johansen recruited a partner and borrowing all the money the pair began building the business. Within two years they were ranked in the Top Ten Yamaha dealers in New Zealand.

While the bulk of their business was Yamaha farm bikes, as part of the franchise they also had access to Yamaha’s outboards.

Following a fire in their shop in 1981, his partner wanted out, requiring Johansen to borrow more money. He was just starting to get on top of things financially when his landlord – a National MP – doubled the rent overnight. This might have been manageable but around the same time the dairy payout halved and local farmers put away their cheque books.

“I basically went broke, I was that close to going bankrupt,” he recalls. “I had to run to work because I couldn’t afford to put petrol in the car.”

Sometimes problems have a way of compounding and in 1985, through an administrative error, he lost his Motor Dealer’s Licence. Fortunately, Yamaha New Zealand allowed him to continue selling farm bikes until he could sell the motorcycle side of the business to Neville Kingsford. Cunningly, he included his lease as part of the deal which got that monkey off his back as well.

Focused solely on outboards and bicycles, Johansen managed to scrape together enough to buy his own, albeit humble, premises. Interestingly, the payments were only $10 more a month than he’d been previously paying in rent.

Wisely, he looked to expand his business further afield than Paeroa. Over time he also added new boats, hunting and fishing to the line-up. “I’ve tried to make it a one-stop-shop and as I’ve made money I’ve put it back into stock. If you don’t have it you can’t sell it.” 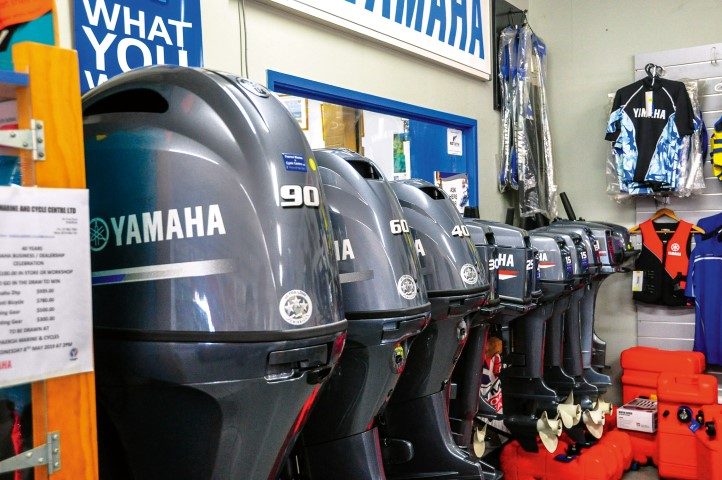 But the core business has always been servicing outboards and Johansen loves Yamaha outboards – “If I couldn’t sell Yamaha I wouldn’t be in the outboard business.”

While Johansen will service any brand of outboard in the workshop, his mobile truck is set up only to service Yamahas because keeping parts of other brands in the truck is too difficult.

He has well over 3,000 customers on his database, from some surprisingly far-off places. Besides Paeroa, they come from all over the Coromandel, especially the popular holiday beachside towns such as Waihi Beach, Whiritoa, Whangamata, Opoutere, Pauanui, Tairua, Hahei, Cooks Beach and Whitianga.

Many of his clients live in Auckland but have local holiday homes so they can drop their boat/outboard off in Paeroa for servicing during the week and pick it up a week later. 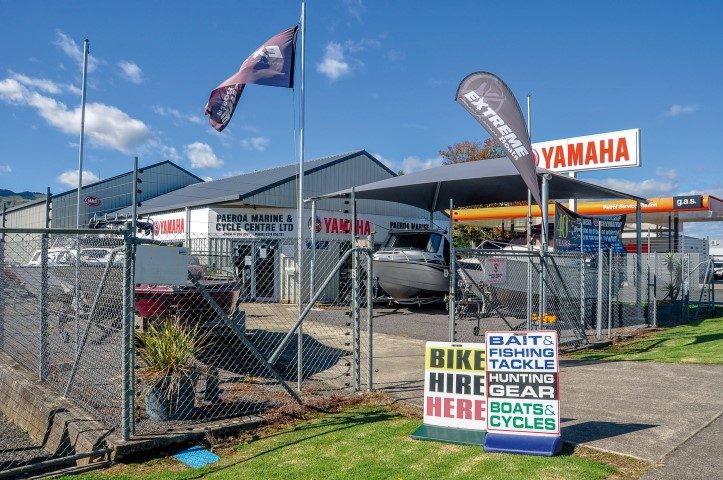 He also has clients in Samoa, Aitutaki and the Chatham Islands, which have all come via word of mouth. Once a year he flies to the Chathams to spend a frantic few days servicing the locals’ outboards. You don’t get flown to the Chatham’s unless you can deliver the goods.

He has a simple yet effective business philosophy – it’s all about how he treats people. As he puts it, “It’s not rocket science. All I do is treat people how I would like to be treated. And when I do a job I ask myself ‘would I be happy paying this much for that job?’ And if that means I have to knock a bit off, then I knock a bit off. I charge what I believe it’s worth, simple as that.”

Of course, drilling down there’s a few other things he brings to the table – an excellent work ethic, a love of the Yamaha brand, owning his own building, watching the overheads and making sure his business is a one-stop shop for anyone boating, hunting, fishing or cycling.

He’s been selling new boats since 1995 when he asked Bill Mackrell of Ramco boats for a dealership. While Mackrell declined a full dealership, he allowed Johansen to become a sub-dealer for Mike Demby of Cambridge Marine. He promptly sold 12 Ramcos within nine months, forcing Mackrell to make him a full dealer.

Another good move happened in 2002 when Johansen sold his other buildings in Paeroa to buy a commercial section on the outer edge of town where he commissioned and built the premises where Paeroa Marine and Cycles now resides.

No question he watches the numbers closely and his profits have come as much from tightly controlling overheads as chasing sales. “I might not be able to read and spell but I can [expletive deleted] count,” he says. “I’m as frugal as.” 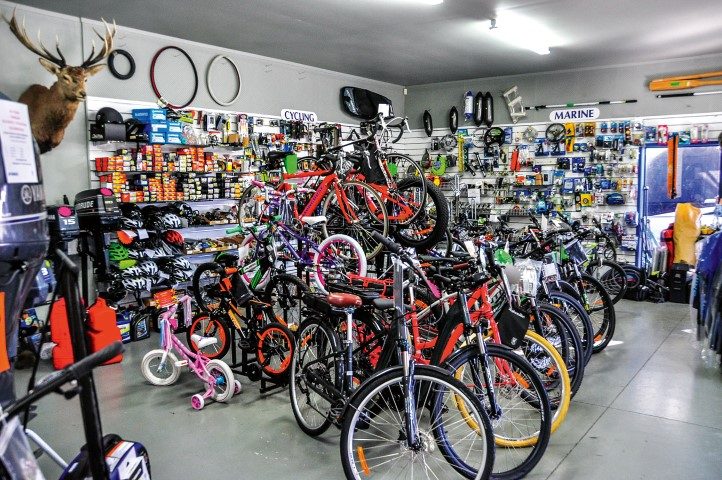 Low overheads, plus owning his own premises, means Johansen’s under no pressure to sell to make financial targets so he can afford the luxury of making sure any sale is the right one for a particular customer’s needs.

“My aim is to have a happy customer who keeps coming back – not like Auckland where you can burn them off and get more. This is a small town.” (Oi! Auckland’s not like that!! Ed).

“That was the real turning point in the business. I had a really good boat franchise to go with the best outboard franchise, so the two just gelled together.”

It was around this time Johansen met and married his late wife Raewyn, who with her banking and financial experience became a big asset in building the business.

His team – Janine, Cath, Sam and Dylan – all seem equally at ease dealing with customers – and the shop has a happy, friendly vibe. 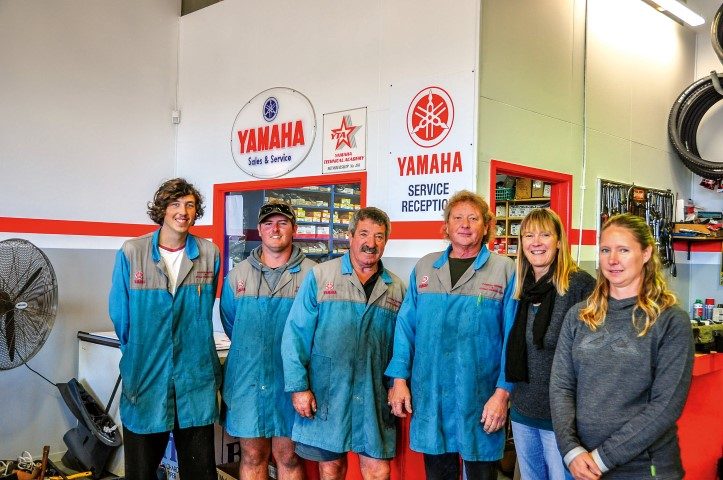 Handling adversity well is another Johansen trait, none more so than when he lost wife Raewyn to cancer two and half years ago. “This whole journey in life is character-building and it’s what you make of it. Every negative you’ve got to turn into a positive. No one wants to come into the shop and see you all miserable.”

So now, aged 60, is he thinking about retirement? No, he still loves his business and is keen to see it continue. Which is highly likely as son Sam is part-way through his apprenticeship and showing a real aptitude as an outboard mechanic. Sam’s also inherited his father’s ready smile and ability to relate to customers. 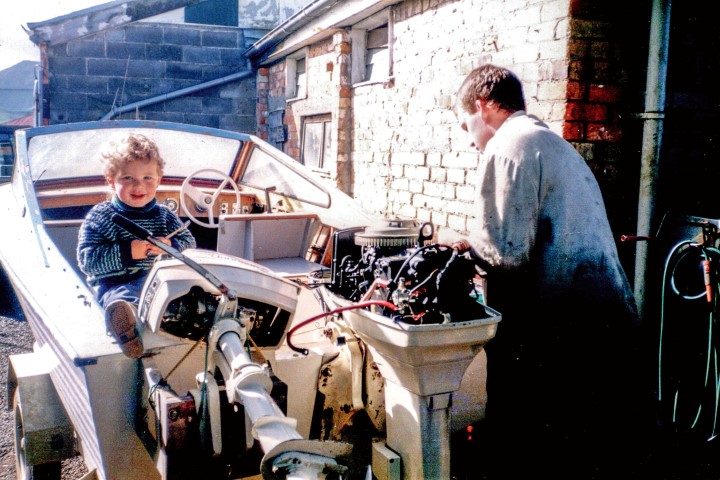 Actually, Sam’s experience with boats and engines goes back a goodly number of years, when Raewyn would leave him with Johansen for the day. “He’s Been brought up in a workshop. When Raewyn went back to work at the bank I used to park Sam in the boats while i was working on their engines. Boats make great play pens. So there you have it, doing business  Johansen style and proof – once again – that a successful business doesn’t have to be complicated. A great attitude towards people, an excellent work ethic, being skilled at your profession and having a ready smile can take someone a very, very long way, even in Paeroa.