Bill Couldrey came ashore in 1931 from his job as ship’s carpenter on the Government Island steamer Maui Pomare – and despite the difficult times quickly made an impact on the Auckland boatbuilding scene.

The Great Depression was biting hard into society. Jobs were scarce for tradesmen, however skilled.

The Hawkes Bay earthquake in February had killed 256 people in Napier and Hastings. The move towards political social consciousness was gaining strength. The Labour Party was to sweep into power in 1935 under Michael Joseph Savage.

The boatbuilding industry was heavily affected by the Depression; there were few orders and many tradesmen were on the dole. Fortunately, the many excellent Auckland boatbuilders were cherished by the relatively (for this so-called ‘classless’ society) wealthy who tended to be yachtsmen and launch owners.

Colin Wild and Bill Couldrey, in particular, both alumni of Bailey & Lowe, found patrons in this stratum of Aucklanders, largely through the powerful influence of Arch Logan, reckoned to be Auckland’s resident genius.

In 1931 Bill Couldrey was living at 32 Richmond Ave., Northcote. He was well-known to the Hodgson brothers, George (also known as ‘Jack’, born 1886) and Athol (known as ‘Waka’, born 1892). They were from a wealthy wool merchant family and had been involved in water sports since their early life.

They had a succession of top-quality motor launches from leading Auckland builders. This included the 32ft Geisha built by Bailey & Lowe in 1905 which they bought almost new, the 40ft double-ender Tahatu, built for them by Logan Bros in 1909 – and Defender (formerly Scripps III), a very fast launch built by T.M. Lane & Sons in 1913 which George bought in 1917 and sold to E.H. Chamberlain of Ponui in 1921.

The Hodgson brothers’ last important launch was Joan, built by Collings & Bell in 1925 with a 40hp Redwing engine, and named after George’s daughter. They often stationed Joan in the Bay of Islands where they had properties and did a great deal of gamefishing.

George was in the crew of Alf Court’s Collings & Bell launch Ruamano which was shipped to Fiji to investigate game fishing there, unsuccessfully, straight after her successful circumnavigation of New Zealand over the summer of 1925-6.

The brothers kept Joan until George died in 1941. Like many sportsmen of their time the Hodgsons also became involved in speedboat and outboard racing in the late 1920s, with crack boats like Gay, Bacteria, Bonzo Match Box, and Tahatu II – but I stray… Both of the Hodgson brothers enjoyed centreboard sailing with a succession of crack yachts which included the Home Bay Sailing Club restricted open 16-footer Waka from 1904, and one each of the new hot Jellicoe class, the 14ft Restricted Class (X Class) yachts Betty (1920) and Joan (1921).

The next hot class was the Arch Logan-inspired 18ft Patiki Class (M Class). The Hodgsons’ boat was Mollie, named after Athol’s wife Florence (known as Mollie). Unlike all the other M Class yachts which were bermudan-rigged in the modern style as Arch intended, at the start Mollie sported a peaked-up gaff rig of the same type as the X Class 14 footers wore for their entire career, but switched to bermudan later.

Of these three post-WW1 centreboarders – Betty, Joan and Mollie – Betty (X2) was built in December 1918 by Walter Bailey’s sons Reg (born 1897) and Norman (born 1900) at the family home at 9 Russell Street, Devonport. Reg worked for Bailey & Lowe but Norman was studying to become an optician.

Betty was the champion 14-footer of the season when Athol Hodgson bought her in March 1920. Then, in October 1921, Bailey & Lowe built Joan (X20) for George Hodgson. Bailey & Lowe had just closed the Sulphur Beach yard and relocated across the harbour in new premises at Beaumont Street.

Bill Couldrey was now an apprentice at Bailey & Lowe and, as the ‘boy’ around the yard, worked under Reg Bailey in building Joan. Betty and Joan were painted as twins, a lustrous French Grey. Not surprisingly, George had twin daughters, Betty and Joan, born in 1916. 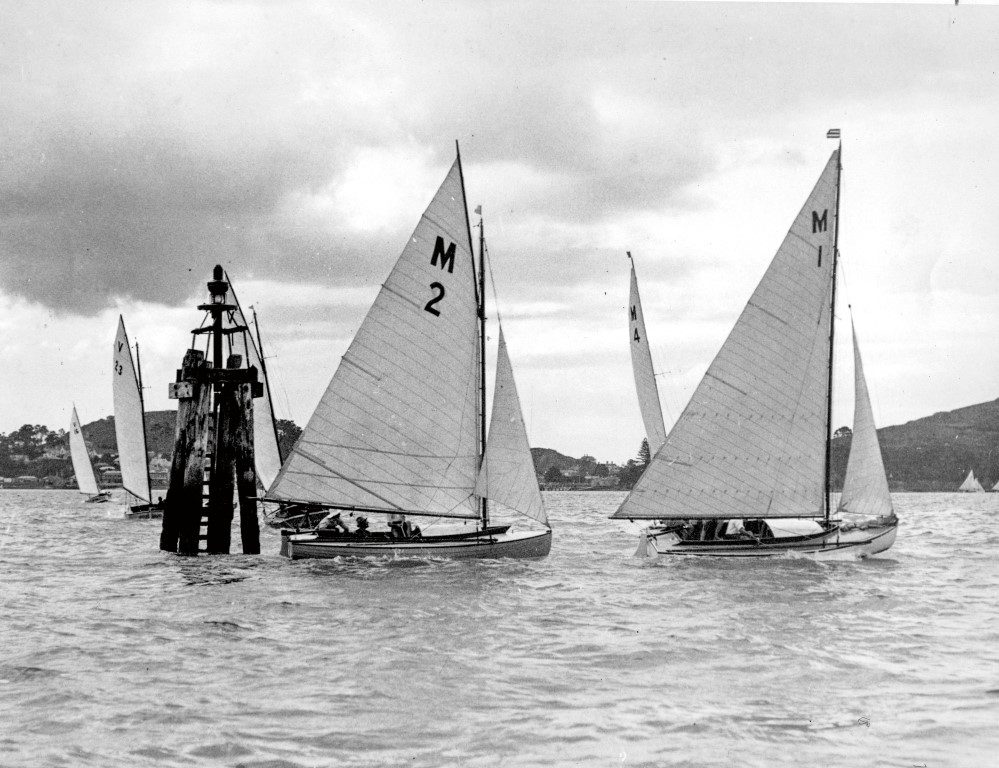 Then, a couple of years later, Bill Couldrey again worked under Reg Bailey building Mollie (M2). He was responsible for making the expensive spruce spar imported from the US to suit the gaff rig.

So Bill already had a strong connection with the wealthy Hodgson brothers when he came ashore from the Maui Pomare in 1931. They engaged him to look after their launch Joan after one of her spells of deep-sea fishing in the Bay of Islands. George Hodgson also wanted a knockabout centreboarder that he, his son Geoff and daughters Betty, Joan and Nancye could race off Herne Bay with an informal group of young yachties.

This group shortly became the Herne Bay Junior Sailing Club under the patronage of the Richmond Cruising (later Yacht) Club and was responsible for commissioning the design of the 12ft clinker Silver Fern class from Arch Logan, ‘the baby M Class’. In 1931 Bill designed and built a 13ft sailing dinghy George called Nancye which sailed very well at Herne Bay for many years.

In need of a place to start building, Bill rented Bob Brown’s shed at Beach Road, Northcote for 15 shillings a week. Brown had built many yachts there since 1910, crack mullet boats, in particular, but his claim to fame was as the designer of the Z Class, the ‘Zeddie’, or ‘Takapuna’ – a mono-type training centreboarder for the Takapuna Boating Club in 1920. This shed went on to produce an astonishing number of boats over the years, from Bob Brown, Bill Couldrey and the most of any, Dave Jackson.

Bill’s connection with Maraetai remained strong. During the team building of the Maraetai Hall over Labour Weekend 1926, Bill met Gladys Wilson whose parents lived nearby. They married in December 1932.

That same year, W. Naismith of Maraetai commissioned him to design and build the 26ft launch Eileen Patricia. Eileen Patricia was indeed a nice job to get in the very depths of the Depression. Fitted with a 10/14hp Thornycroft engine, she was beautifully finished. She was followed by the 25ft launch Colleen for Charlie Aspden of Northcote who worked on her alongside Bill.

Apart from these two launches and maintenance work on his cousin Harold George’s keel yacht Victory and local Northcote yachts and launches, work was tight. Now, thanks to Arch Logan and the Wilson New Zealand Herald newspaper family, there came an opportunity to take on a high-profile job which would make his name as a builder.

In December 1933, the keel yacht Little Jim, owned by Jim Mitchelson came ashore in Catherine Bay, Great Barrier Island, after being dismasted at sea off Little Barrier. Logan Bros had built Little Jim as a ‘schnapper boat’ in 1901, a Hauraki Gulf line fishing keelboat as distinct from Auckland’s ‘mullet boats’, centreboarders which netted their catch in the shallow estuaries.

Converted to a pleasure yacht in 1911, Little Jim had been an active racer and cruiser ever since, taking part in ocean races and being scratch boat in the Auckland second class keel yacht races. Mitchelson’s aunt, Bertha Wilson, gave him the difference between the insurance payout of about £300 and the cost of a brand-new Logan-designed yacht. 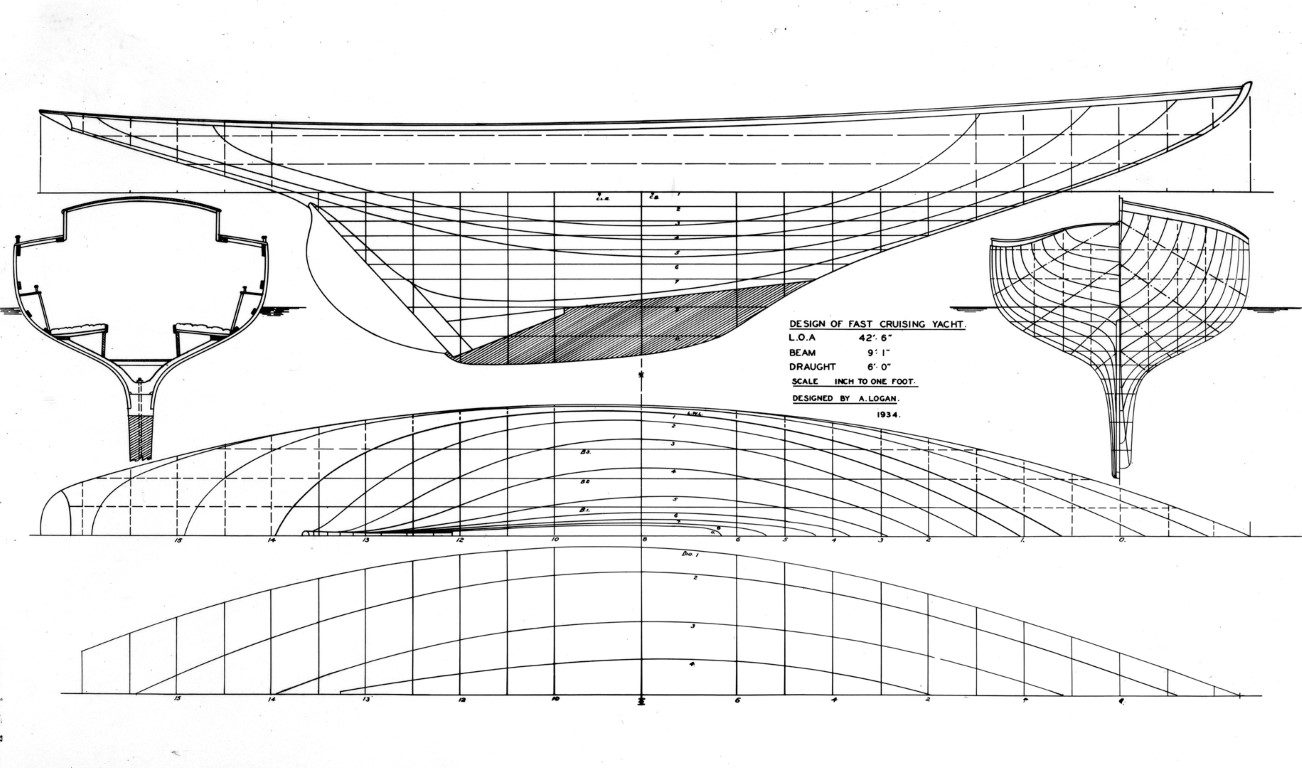 Mitchelson gave his brief to Arch Logan early in 1934. Arch drew up the up-to-the-minute new Little Jim to be bigger than the original at 42ft 10in x 28ft x 9ft 1in x 6ft – and rigged as a marconi cutter.

Arch built the moulds, keel, sternpost and bib of Little Jim at his shed at Ngataringa Bay. Perhaps he intended to build her entirely himself, but thought better of it and had Bill Couldrey contracted to complete her.

The components he had already built were trucked to Couldrey’s Sulphur Beach shed and Arch set them up. He didn’t drive, so once a week he was picked up and driven to Sulphur Beach to inspect progress and approve the work or order it be redone. 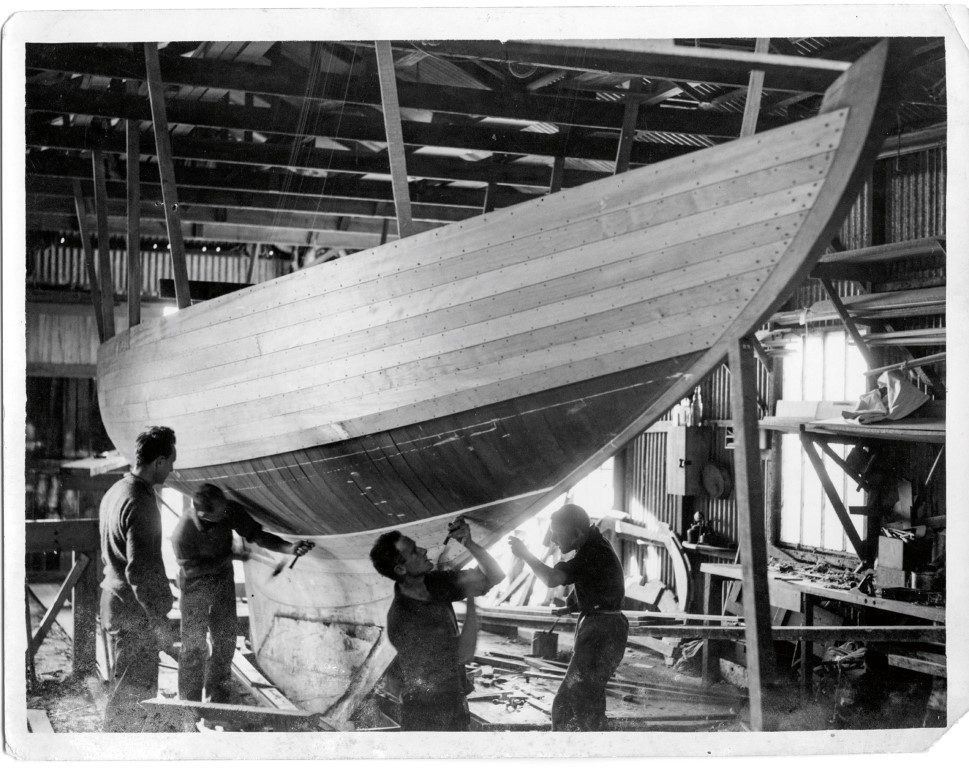 Stan Jervis, one of the original crew, told the story that Arch, with a string and his experienced eye, marked the position of the sheet fairleads, making an ‘x’ on the deck for their position. They were spot on and never needed moving.

Bill Couldrey made swift progress. He launched the new yacht on 17 November 1934 at a cost of £900 complete. Arch took the tiller for the trials. Little Jim’s maiden race was with the RNZYS on 15 December. Jim Mitchelson’s uncle, Willie Wilson, was the helmsman and Arch was on board. The boat’s first major win was in the 1935 Anniversary Regatta the following month.

The Wilson and Mitchelson families had defied the Depression by investing a sum greater than the price of a current medium-range new house in Auckland in Little Jim, the first new major keel yacht built in Auckland since the Winstones’ Nga Toa in 1926 and before that, Bill Endean’s Prize in 1923.

This expression of confidence came as many yachtsmen throughout the country began building yachts despite the difficult economic times. Johnny Wray and his home-built deep-water cruiser Ngataki typified the spirit abroad which endeared yachtsmen like him to the public and made them into popular heroes in a city where yachting has always been a major sport, across the entire community.

The building of Little Jim kick-started this spirit which, from 1934, led to a renaissance in all types of boat building, not only in keel yachts, but also in mullet boats and motor launches. Bill Couldrey played a significant role in this powerful revival as I shall document in future issues.