In what is surely one of the world’s most unusual marine transportation solutions, small launches negotiating a series of canals and lakes in Poland temporarily leave the water and are carried overland by rail. The Elbląg Canal is an ancient but ingenious piece of engineering, writes Lawrence Schaffler.

The 80km canal’s system of carriages and rails – in Poland’s Warmian-Masurian Voivodeship region some 240km north of Warsaw – has operated since 1860 and took 16 years to build. It comprises five inclined ‘planes’ that interconnect a series of canals and lakes and it’s widely considered one of Poland’s ‘seven wonders.’ Engineers opted to use the rail-and-carriage system because the topography was too steep for conventional locks.

Kaiser Friedrich Wilhelm II of Prussia commissioned the canal system to connect what was then East Prussia to the Baltic Sea – a calculated move to boost trade in the region. Though designed for vessels carrying general cargo, the hot product of the period was timber for manufacturing ships’ masts.

Vessels using the canal were limited to 50 tonnes displacement with a maximum length of 24.48m, a 2.98m beam and a 1.1m draught. Those dimensions were dictated by canals on either end of the rail/carriage system. The vessels rose/dropped nearly 100m in elevation in the transiting process.

Today only recreational/tourist boats use Elbląg Canal – and it runs through some of Poland’s most attractive landscapes. The damage it sustained during WWII was repaired in 1948 and the entire system was extensively refurbished between 2011 and 2015.

The inclines all feature two parallel rail tracks (allowing simultaneous up-and-down traffic) with a 3.27m gauge. Boats are floated onto the carriages which run on the rails. The system’s energy-efficiency lies in the tandem movement of the ‘up’ and ‘down’ carriages – one carriage is lowered down the incline to counterbalance its upward-moving partner. In effect, gravity and the downward-moving carriage help to haul the upward-moving carriage.

In addition, the engine rooms driving the mechanisms are ‘water-powered’ – thanks to gravity water flows from the canal via a vent to turn a powerful 8m paddle-wheel equipped with 60 ‘shovels’ or blades. The wheel drives a series of gears and steel cables.

When it opened the system proved an immediate success – Kaiser Friedrich Wilhelm’s wayward foreign policies and headlong dive into WWI might not have endeared him to the international community – but his Elbląg venture was a prescient move. By the mid-1860s more than 50 vessels were using the system daily.

Inevitably – as with so many other technological innovations of the period – its commercial success didn’t last very long – the death knell came with the expansion of Europe’s railway network. Traffic on the Elbląg Canal slowed to a trickle. But tourism and recreational boating offered a second wind. Pre-Covid around 40,000 tourists were transiting the canal during the summer season.

The area around the canal is very picturesque and is particularly recognized for its birdlife – it’s home to around 200 species of birds – so a canal ‘twitcher’ trip is considered a kind of pilgrimage for European ornithologists.

While the canal is rightly considered a technological triumph of its time, its designers cannot claim full credit for its conception. A German engineer – Georg Jakob Steenke – is generally accepted as the ‘godfather’ of the design, but it turns out he based his plans on an existing canal system then operating in New Jersey in the USA – the Morris Canal. 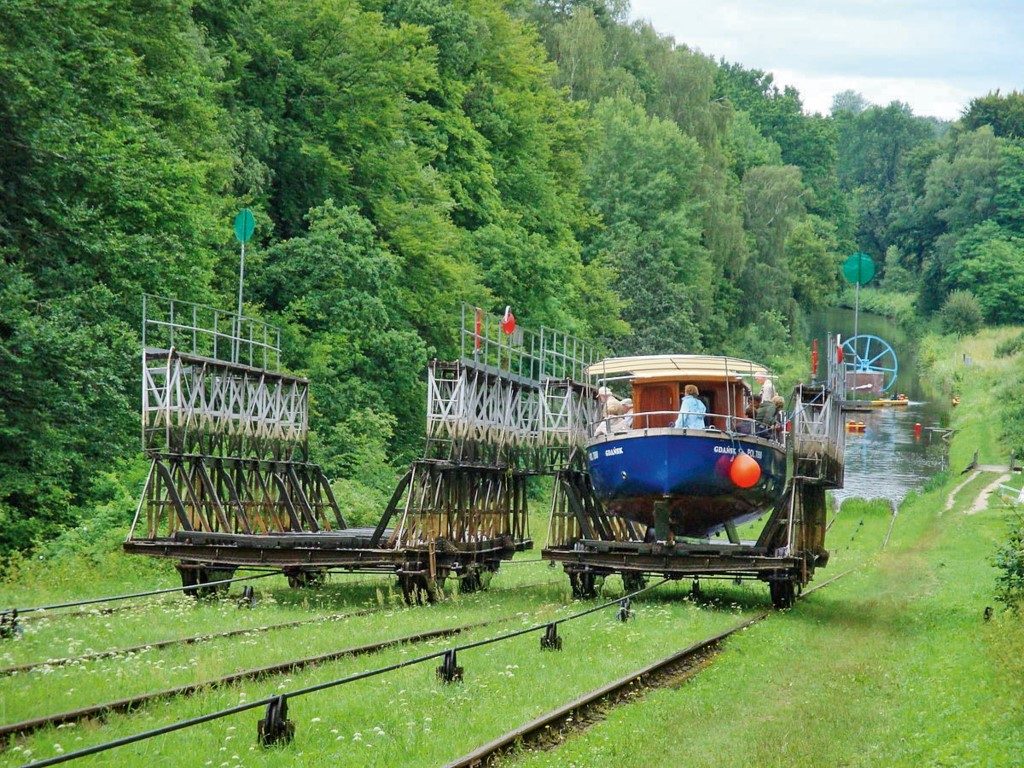 Completed in 1829 the 172km Morris Canal was designed to carry coal across the northern New Jersey hills – a replacement fuel for industries in the eastern cities that had completely stripped the natural growth forests. With a total elevation change of more than 270m, the canal was the first in the US to use water-driven inclined planes.

As with the Elbląg, the Morris Canal’s star began to fade with development of the railroad and later truck transport. It was formally abandoned in 1924.

The Elbląg Canal is one of the Seven Wonders of Poland – the other six are the Wieliczka Salt Mine, Torun Old Town, Malbork Castle, Wawel Castle and Cathedral, Zamość Old Town and Kraków Market Square and Old Town.

If Covid ever relaxes its stranglehold on the planet, I’m sure they’re all worth visiting.

Thrust you can afford